From my Archives: Winter '14 From Sunny Spain to Snowy Boston, KLM and Delta to Boston

From my Archives: Winter '14 From Sunny Spain to Snowy Boston, KLM and Delta to Boston

From my Archives Project
Working as an EMT this summer I have a lot of down time in between calls. Because of that, I have decided to turn some of my old notes on past trips into trip reports. These reports will mainly focus around trips where things went wrong, or airlines where there are not a lot of reports on them. Because of how long ago these trips were, I would like to apologize if these are slightly less detailed than my other trip reports. I would also like to apologize if the photos are not of a high quality/the normal orientation for airliners.net, mainly because they were not originally meant to be posted. As always, feedback is appreciated

Background Information
In February 2014 I joined my school's trip to Paris, Provence, and Barcelona. The tour operator (EF tours) booked our entire group to depart on BA 212 on the 13th of February and BA 332 arriving into ORY on the 14th. I will not be writing about these flights because their are a lot of BA flights on anet (including my own more recent review https://www.airliners.net/forum/viewtopic.php?t=1399201).
For the return home from BCN on February 22nd we were split up into 2 groups. One, smaller group took AA65 to JFK and then connected on AA 256 to BOS. The second, larger group (with myself included), had an early morning departure from BCN on KL 1662, connecting to DL 231.

At the Airport
At about 4:00 my group's bus dropped us off at BCN. Using the KL kiosks I was able to quickly get checked in with 2 window seats for both my flights. Once done with that we proceeded to security, where there was one security guard shouting in Spanish about tablets. Being that I didn't speak Spanish, and she didn't speak English I had a difficult time communicating with her and ended up getting additional screening at the checkpoint. Once through I started to do some planespotting. 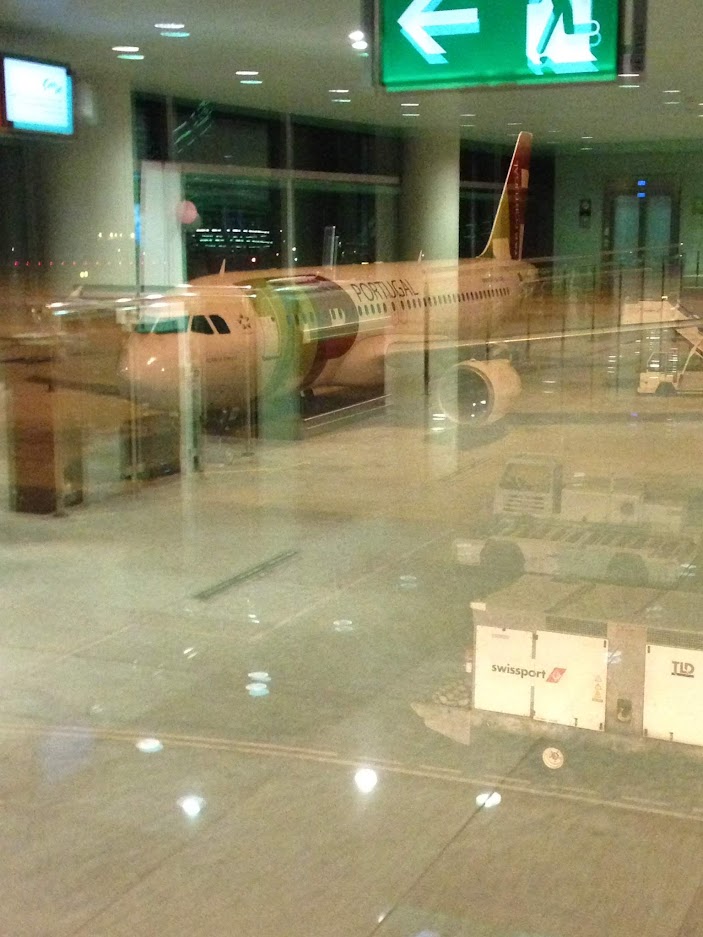 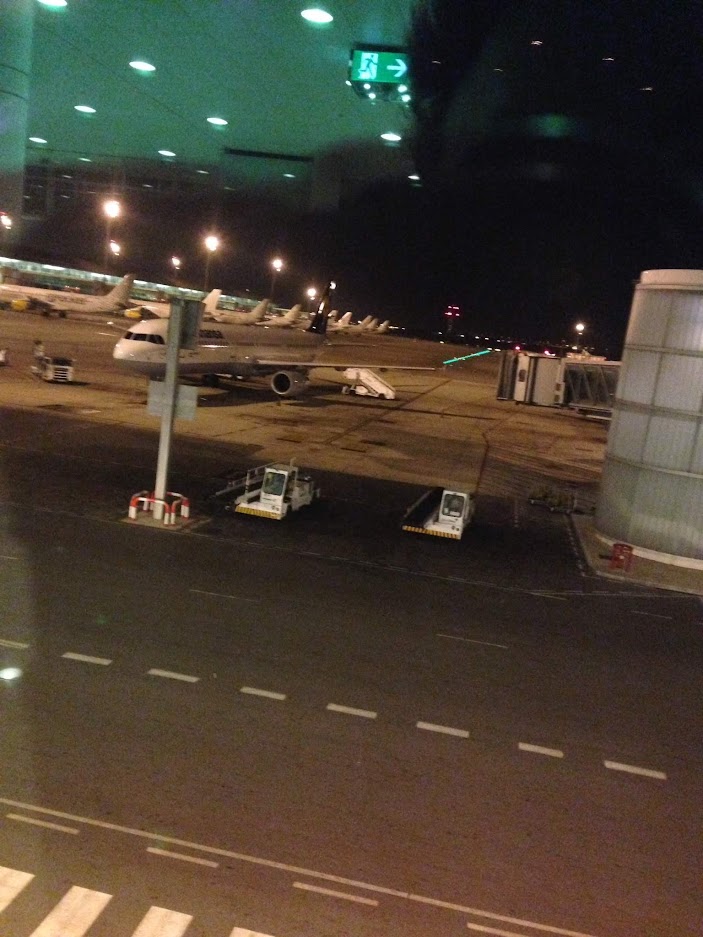 I was unable to get a picture of my PH-BXE, so I have attached one from airliners.net below. 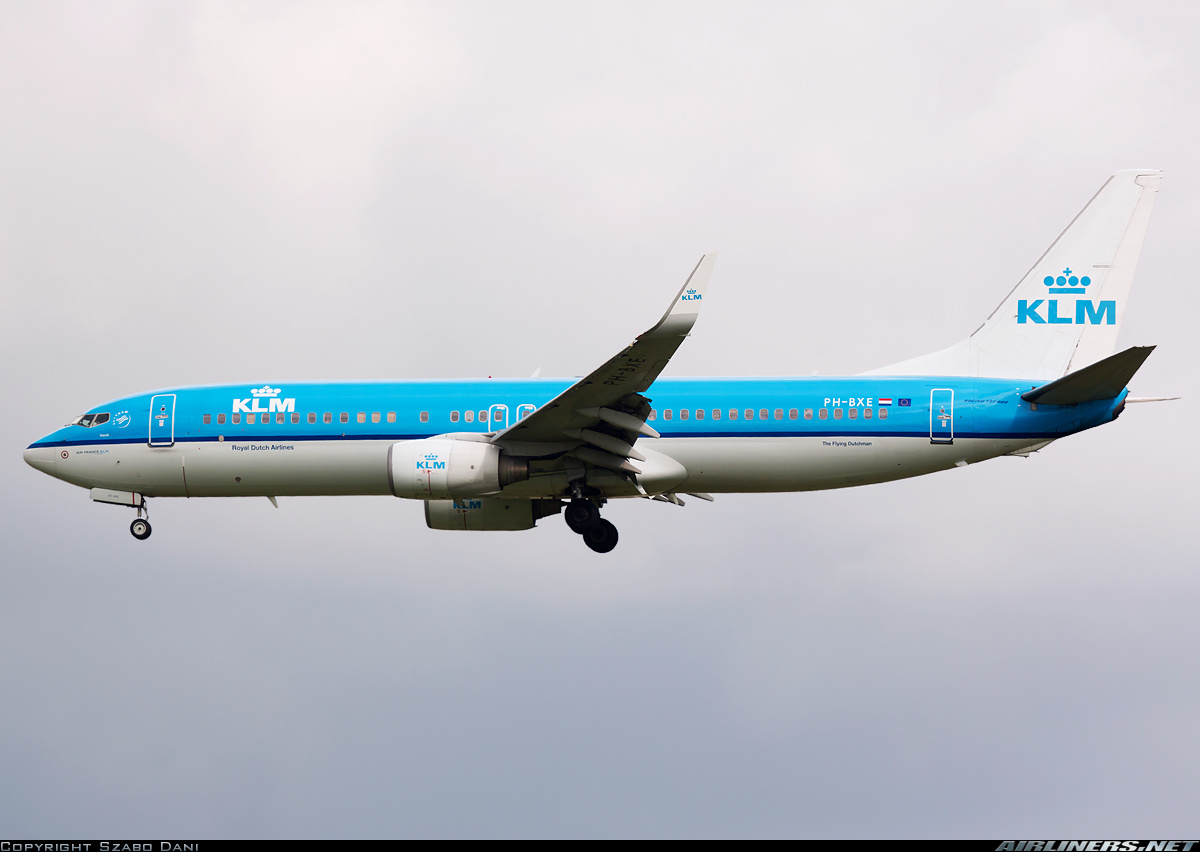 Boarding was called on time and I was quickly aboard the aircraft.

Onboard
Once onboard I proceeded to my window seat. The seat while thin was quite comfortable for the 2 hour flight to AMS. The leg room provided was sufficient for a flight of this length. 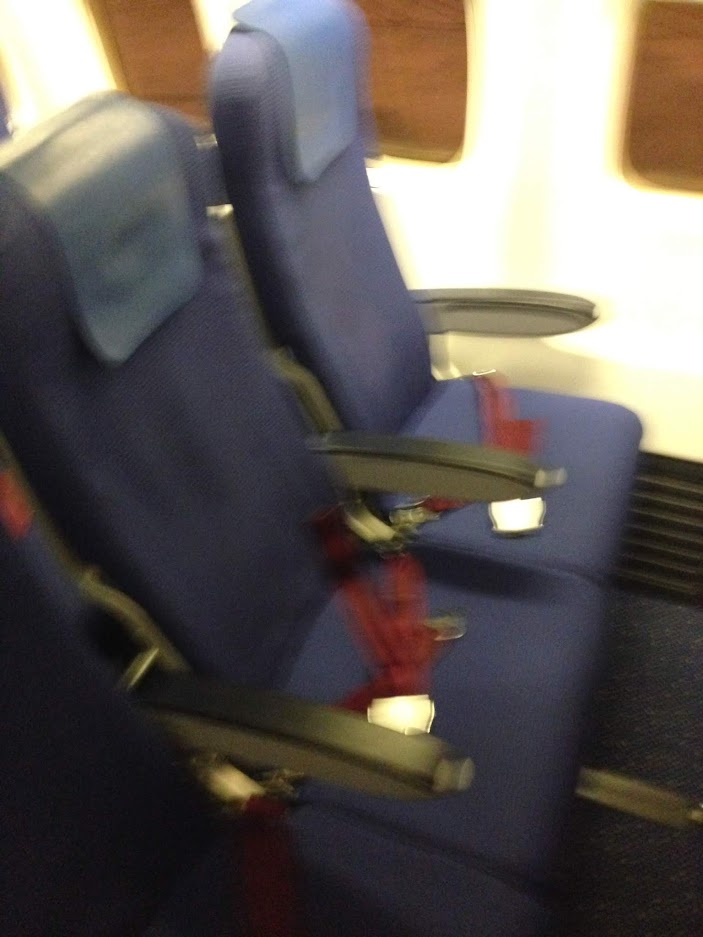 Sorry for the poor quality. The seat. 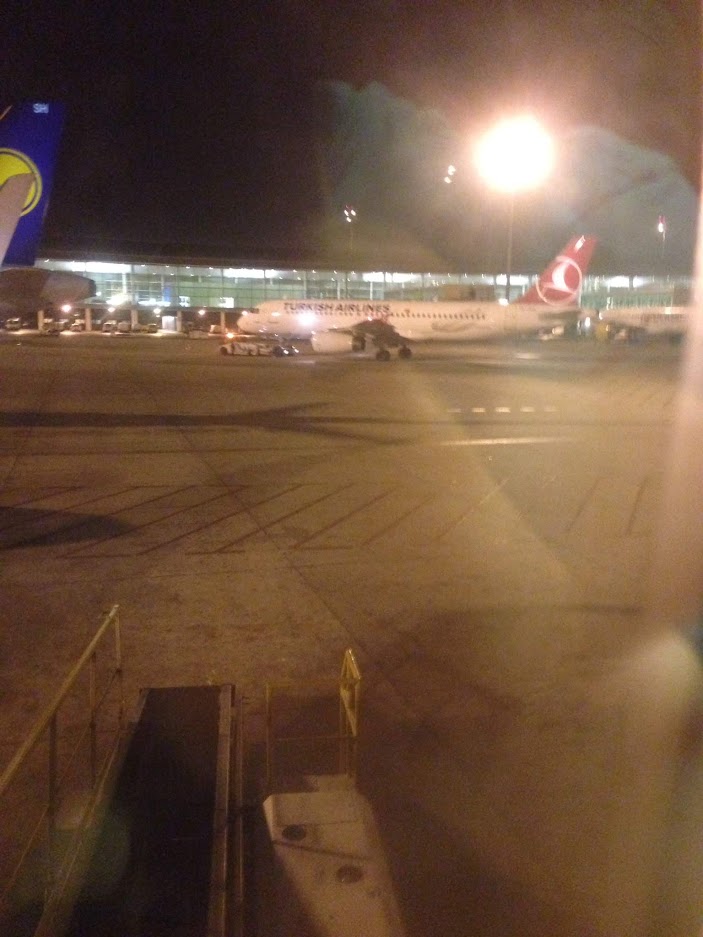 View from the window

Boarding was complete and the door was closed roughly on time, and the flight attendants began their manual safety demonstration. After a quick taxi we executed a smooth take off from BCN and began the trek to AMS. Because their was no entertainment available on the flight I just looked out the window. 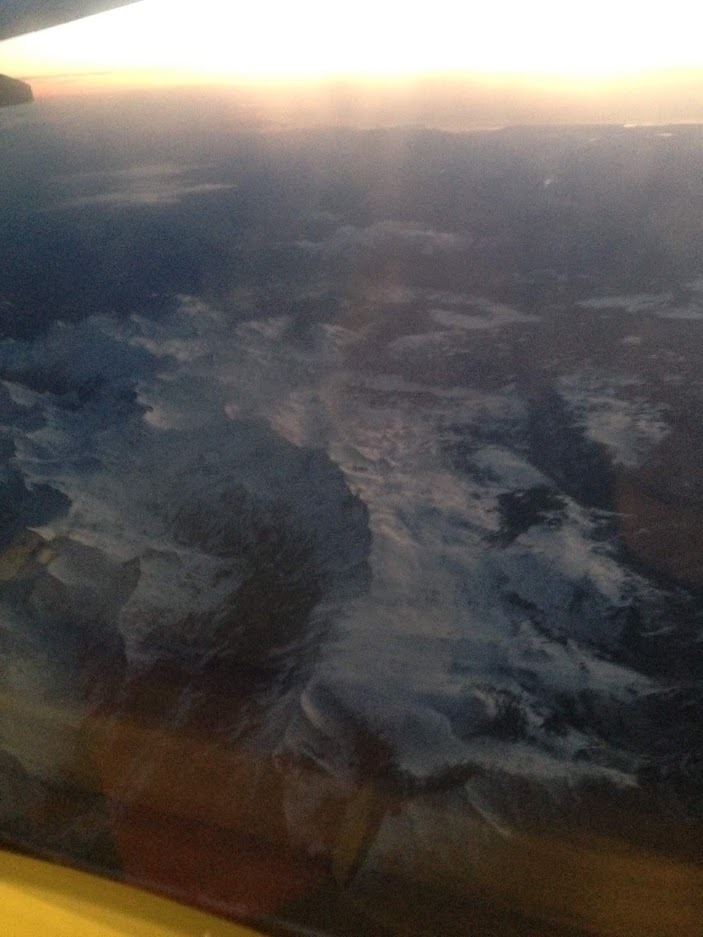 Soon after reaching cruising altitude the flight attendants started their service by distributing sandwiches and beverages. I selected a water and had the sandwich. 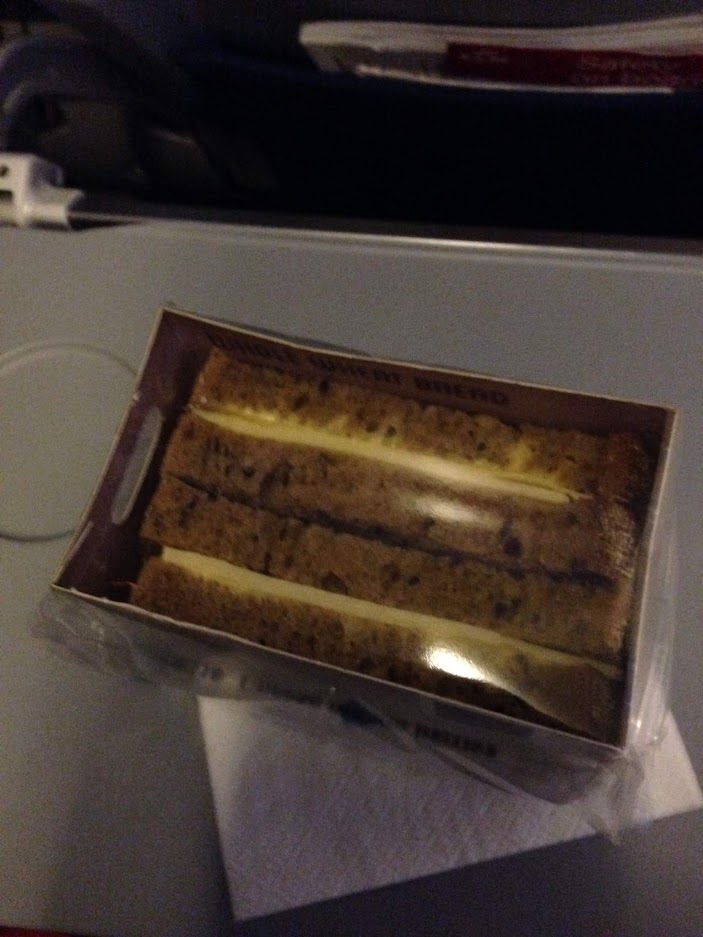 The sandwich consisted of some slices of edam and a sweet berry spread on some nice, thick whole wheat Dutch bread. This sandwich was light and was just right for breakfast.

Once they had completed their first pass, the flight attendants came back through the cabin to distribute stroopwafels. 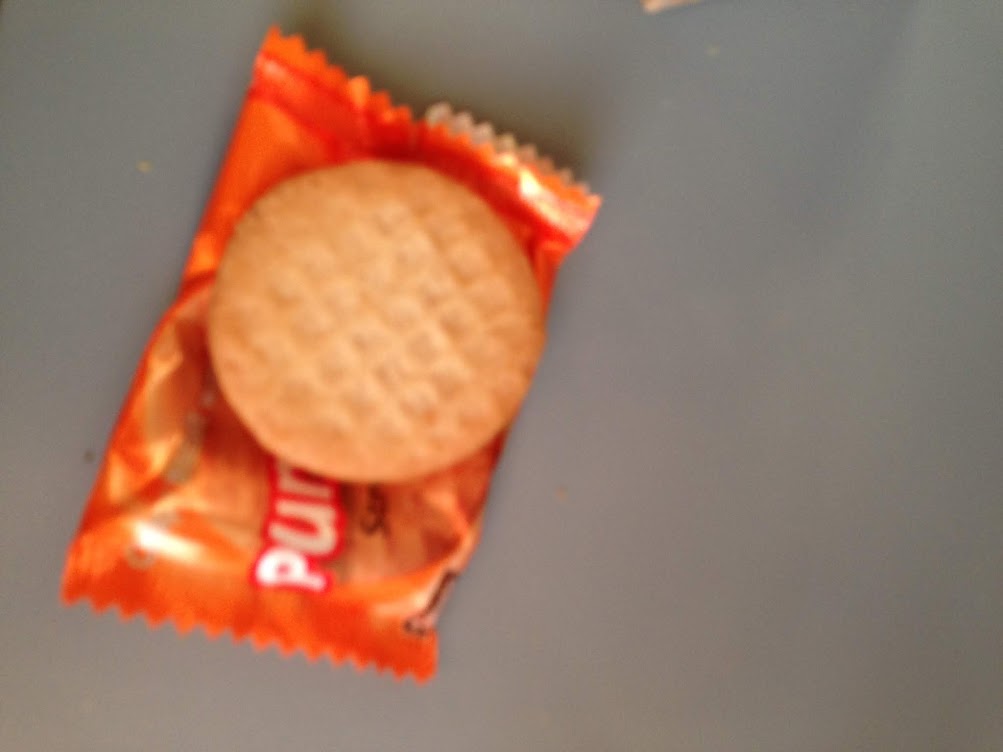 While the cookie was a little thicker than it should have been, it was still very tasty and went well with the sandwich.

After coming through with the cookies, the flight attendants did a third pass offering duty free. This marked one of the fullest services that I have had on a flight like this.

After what felt like a short flight, we began our descent into AMS and the flight attendants began to prepare the cabin for arrival. About 50 feet above the runway the throttles were cut, and we executed a slighty bumpy landing into AMS and began a long taxi. 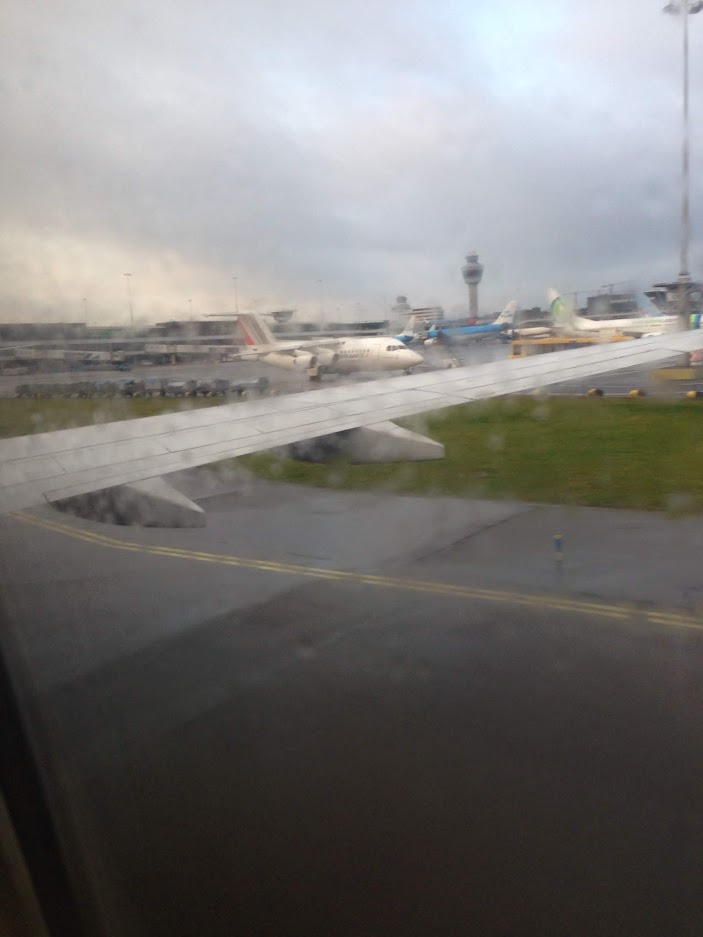 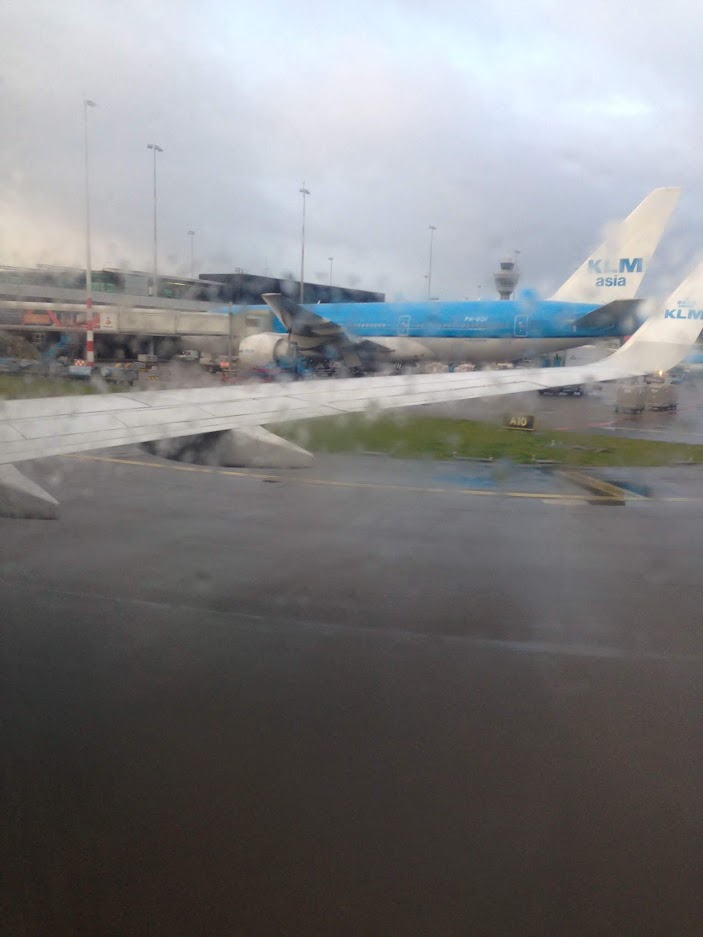 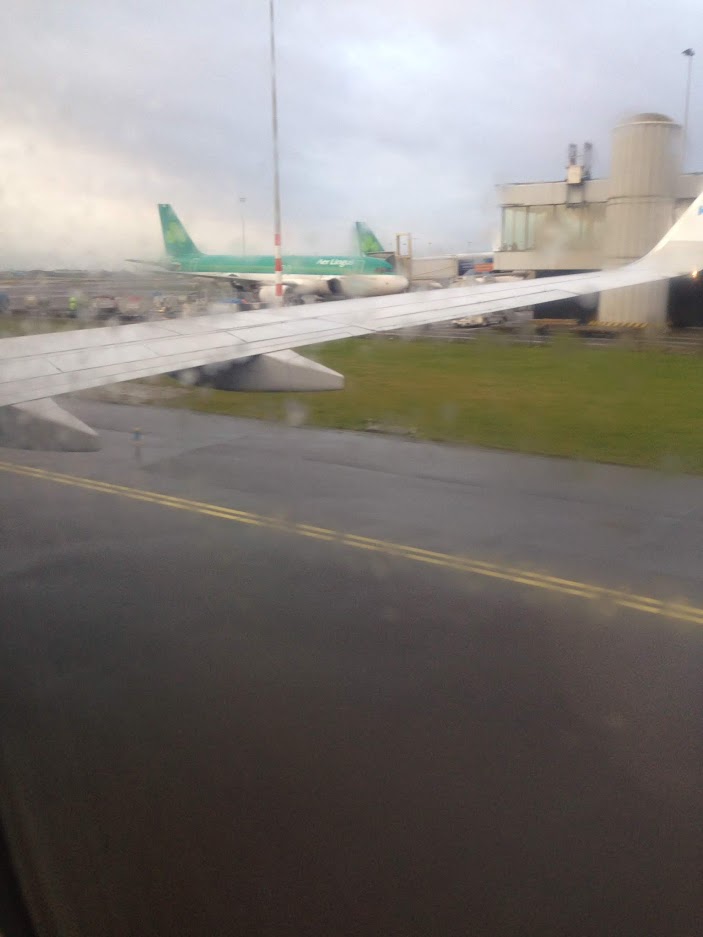 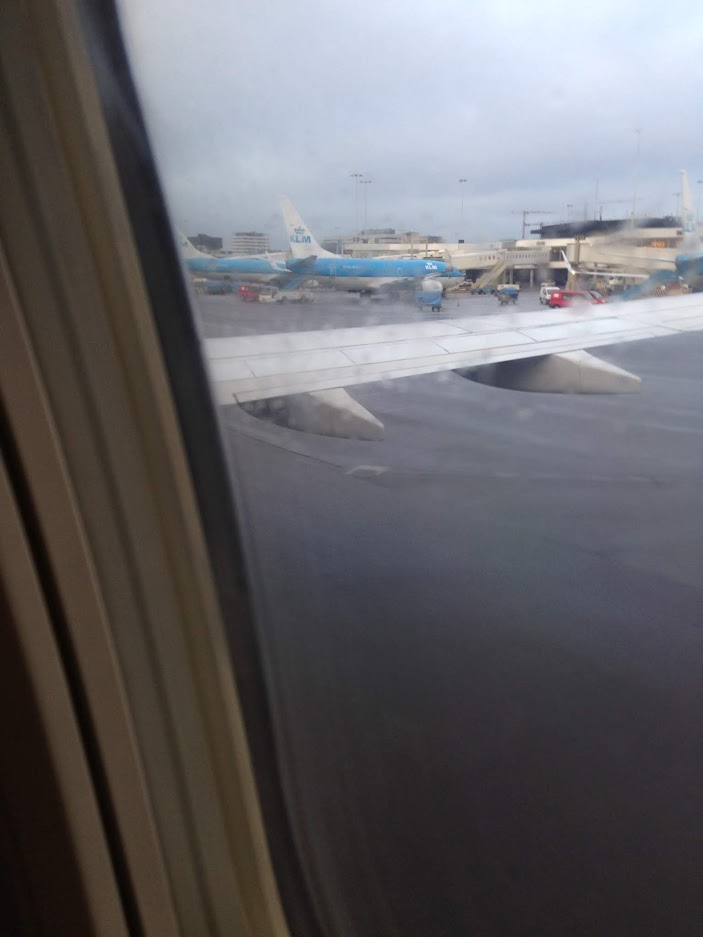 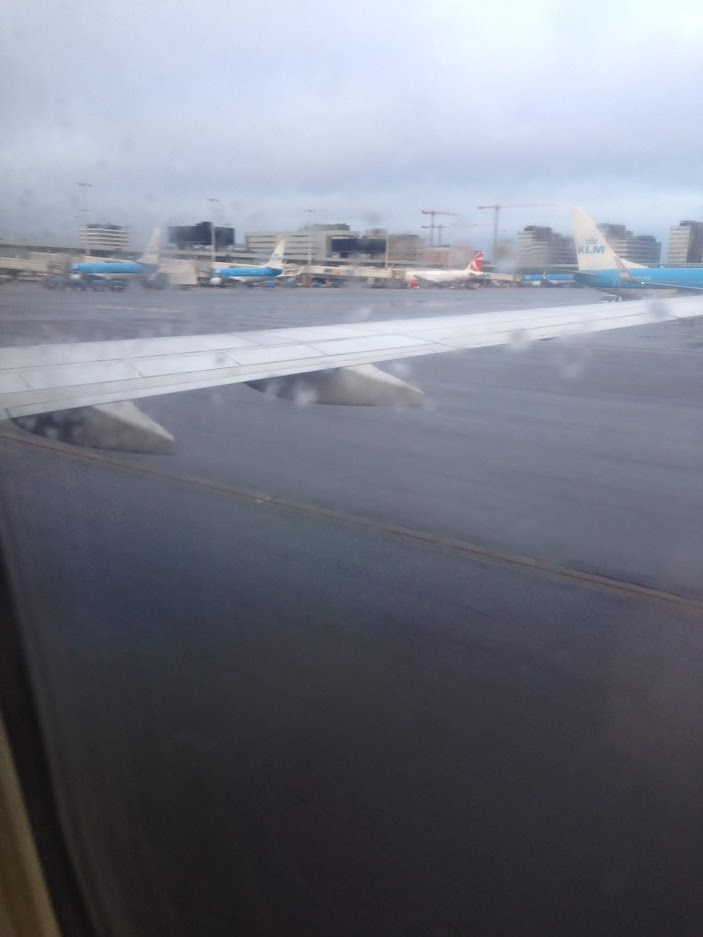 Due to a long taxi we pulled into the gate about 20 minutes late.

Connecting in AMS
Once everyone had disembarked from the aircraft, we proceeded as a group to exit immigration at the D concourse. Despite their being a long line, we were through fairly quickly with the border agents just stamping the passports and not asking any questions or doing any checks. Once through this check point we proceeded to just outside gate D-3. At the D concourse non-schengen floor security was being conducted at the gate, and you could not begin to go through the checkpoint until your flight was called. Because the DL AMS-BOM flight (since discontinued) was boarding when we got there, I found a window outside the checkpoint and settled in to do some planespotting. 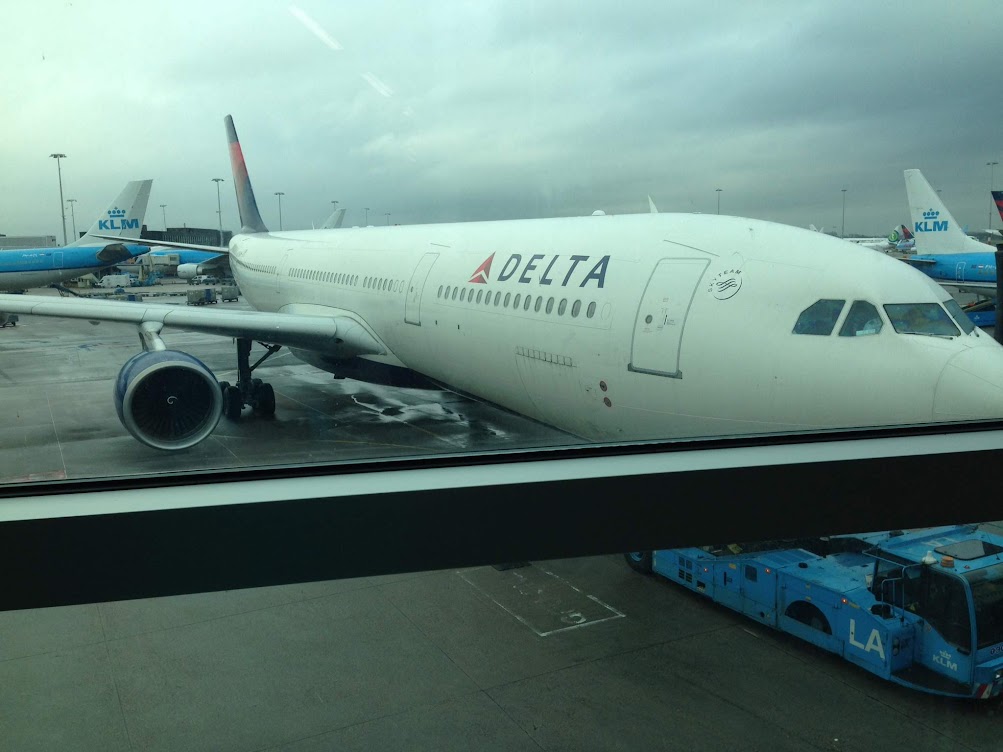 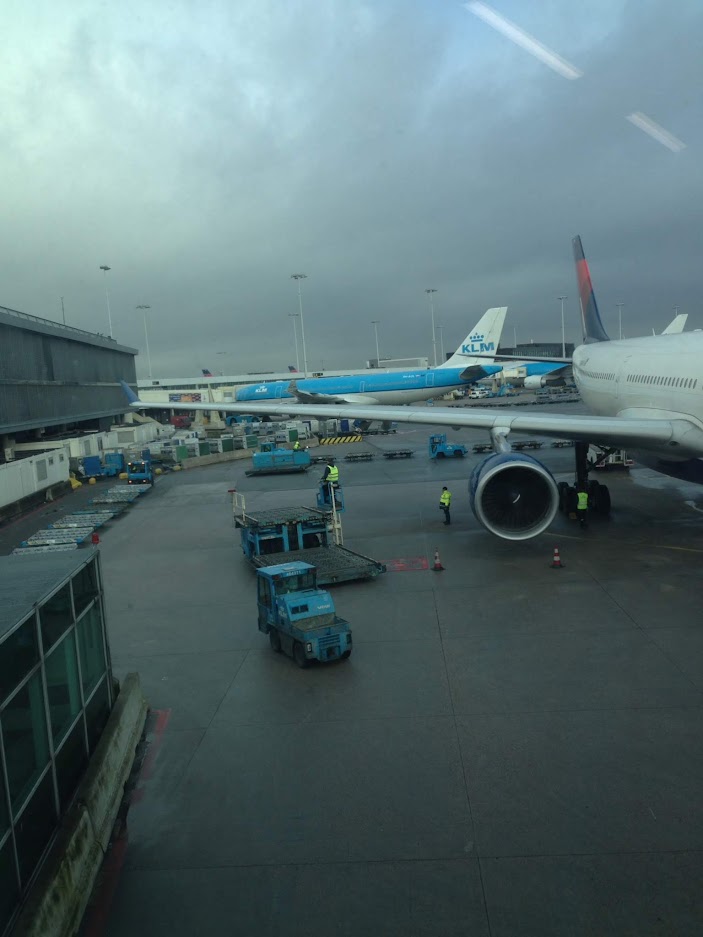 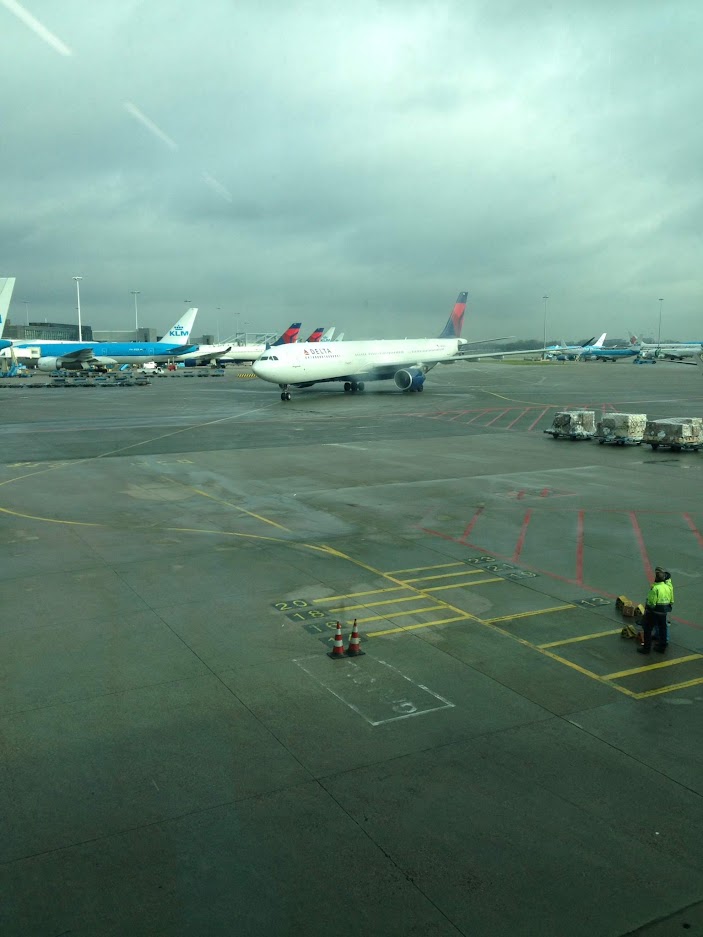 My DL A333 pulling into the gate

Once our A333 pulled into the gate late from SEA, our group began to marshall everyone together for the security screening. After passing through a brief security interview in groups of 3-4 and having a sticker placed on our passport we underwent a security check and were then checked into the gate area by 2 KL agents.

Once the aircraft had been serviced before its long trek to BOS, boarding was called in groups.

[img]Onboard[/img]
Once onboard I made my way to my window seat. The leather seat was probably one of the least comfortable that I have encountered in my 5 TATL trips. It was hard and poorly padded and was not comfortable during the flight. The leg room though was good. On the seat was a pillow and blanket. Once settled in I began to do some planespotting. 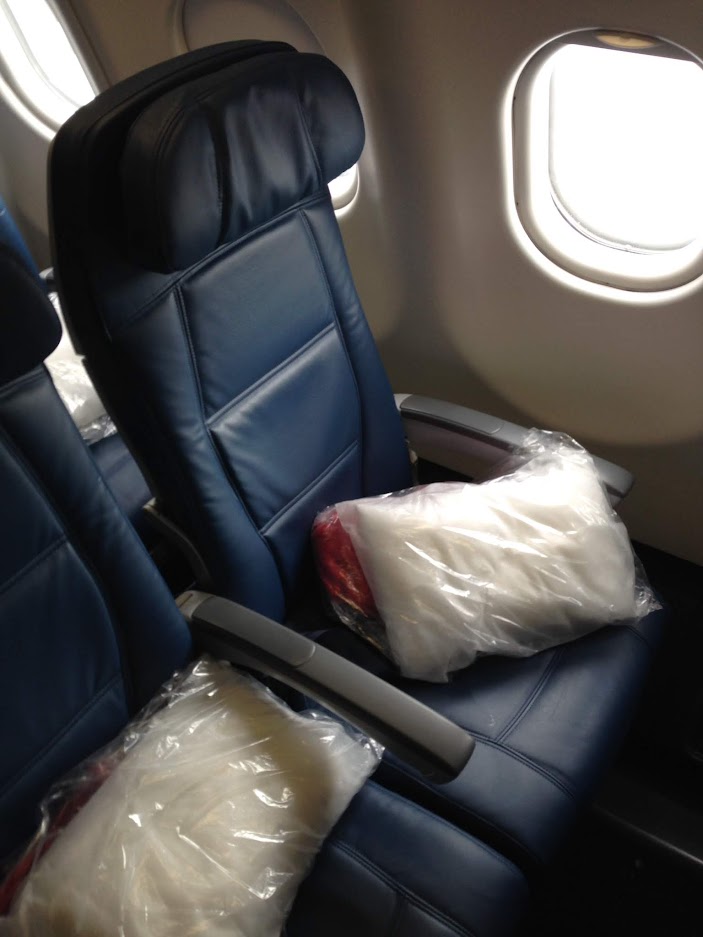 Once boarding was completed the DL safety video began to play and we began to push back. After a quick taxi we took off and began to turn towards the Atlantic. Immediately after takeoff the lead flight attendant got on the intercom and announced what services would be available on the flight. She also announced that for lunch we would have the option of having sweet and sour chicken, a pasta dish (I forget what it was), and a cold Cobb salad with chicken. Once we had climbed above 10,000 feet I began to explore the IFE system. The system had a broad selection of films, TV shows, and music on offer. I think I started off by watching Argo.

Soon after leveling off the flight attendants began their service by coming through the cabin with US declaration cards followed by a full beverage run. While I skipped on the beverages, I did get the pretzels and peanuts that they were serving. 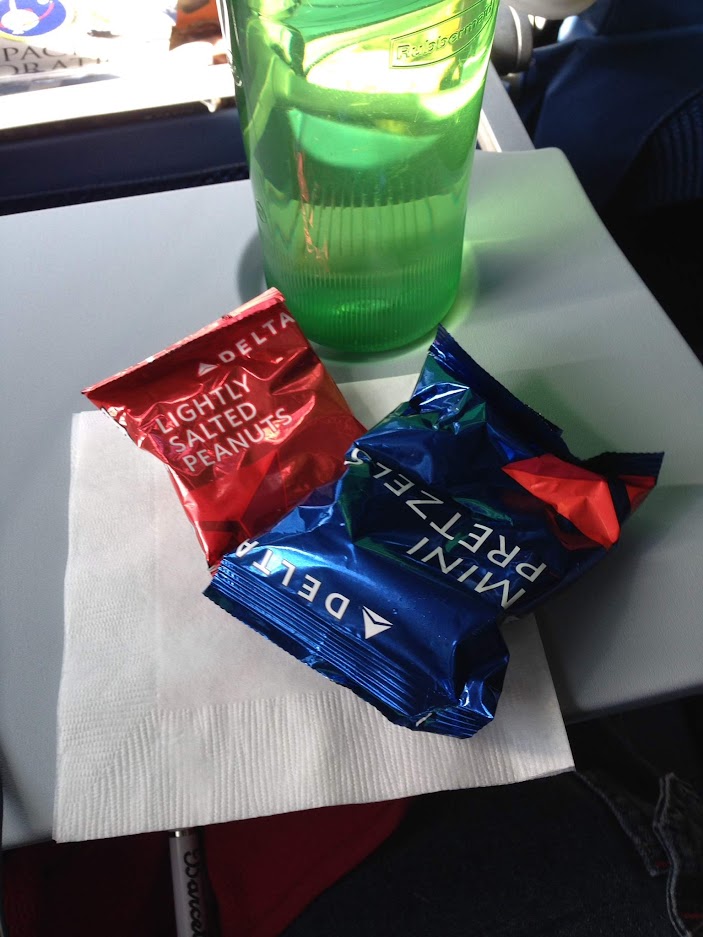 After a reasonable wait the attendants began the lunch service very robotically. Once they got to my row I selected the sweet and sour chicken, and I again skipped on the beverage service (I was using my own water). 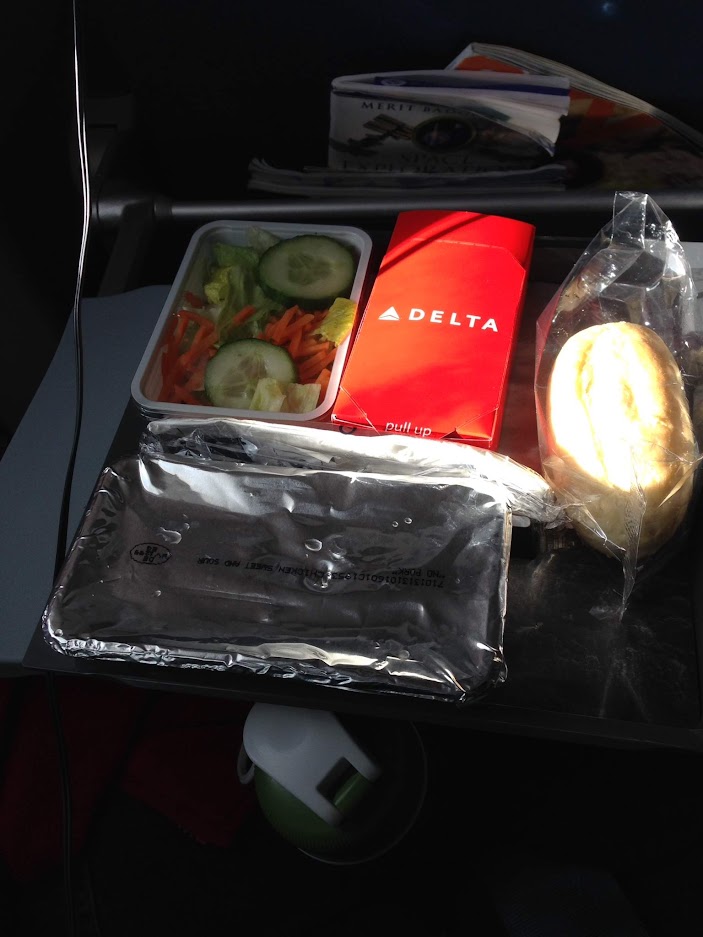 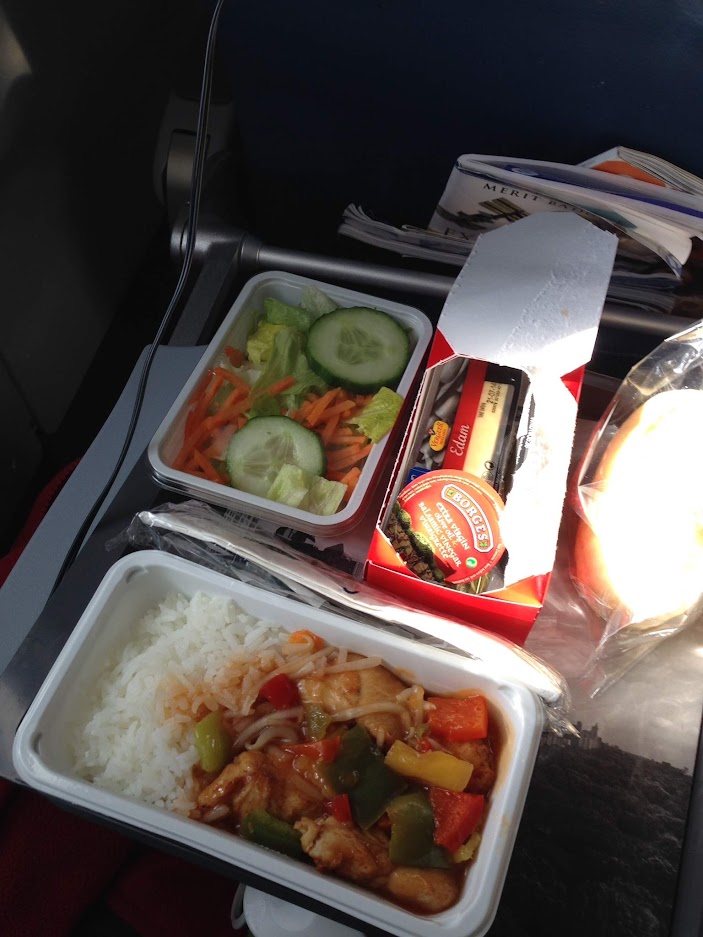 The entree and contents of the box.

The salad that started the meal was fine as a starter- while the veggies weren't overly fresh tasting they were still very crisp. Normally sweet and sour chicken is supposed to have a sweet and tangy sauce. This version of the dish was just bland. The meal was accompanied by a stick of good edam cheese, a generic roll with butter, and a cookie that I did not have. Overall, the meal was adequate. 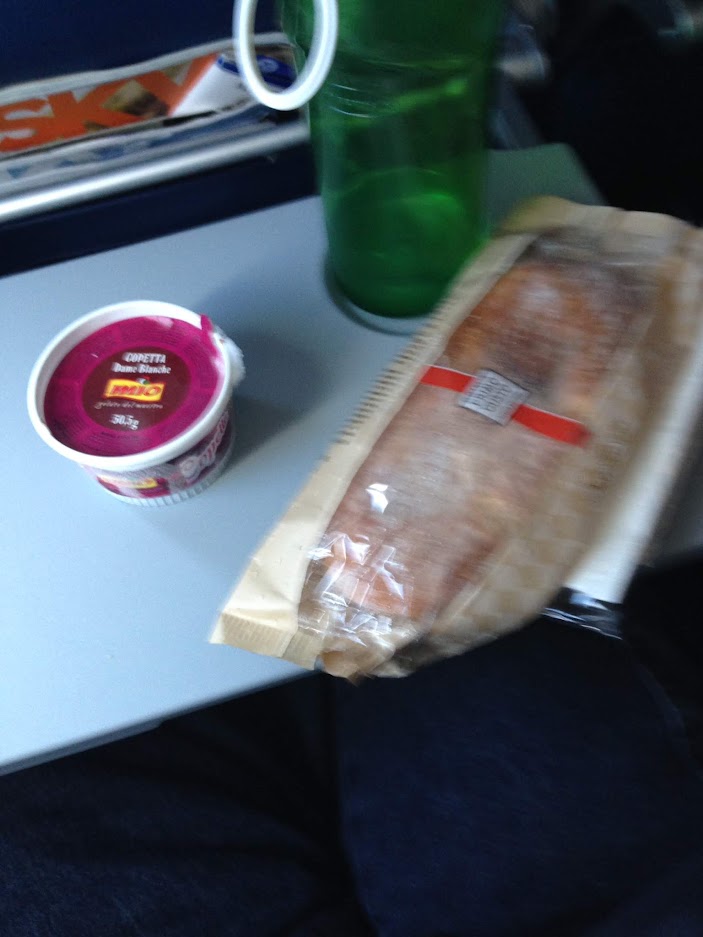 The snack consisted of a sandwich and some ice cream. The sandwich consisted of some cheese and tomato sauce on a piece of stale/soggy bread. The ice cream was hard and full of ice crystals. Combined, it made for a very bad prearrival snack/end to the flight.

As the flight attendants came through the cabin to collect the waste from the meal, we began our descent into BOS. 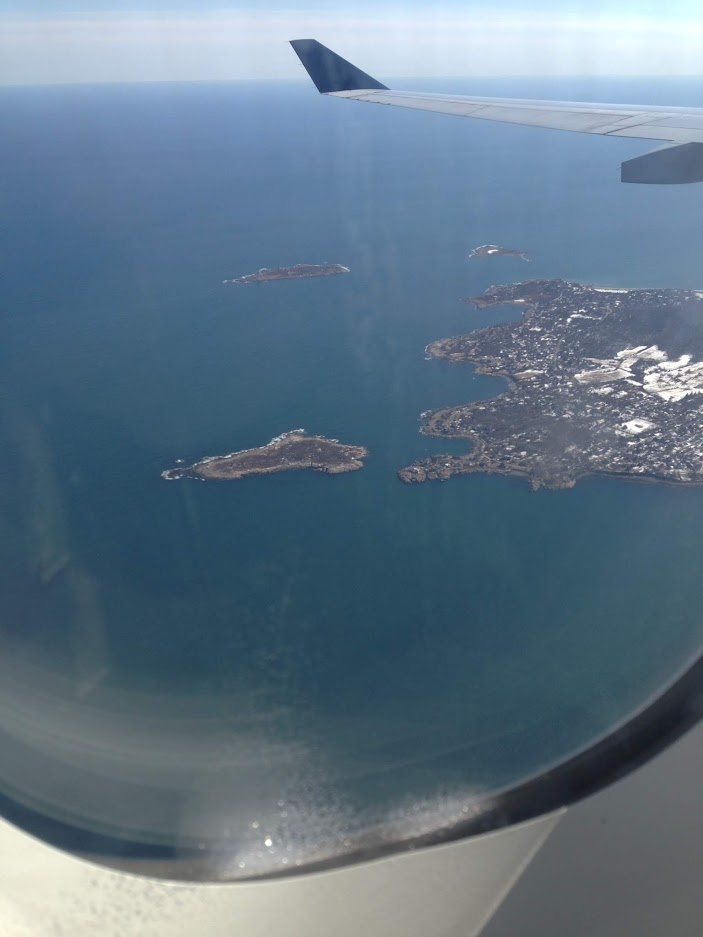 The first view of MA as we begin our descent.

We proceeded to execute a bumpy landing into BOS, before beginning a long taxi past all of the BOS terminals. 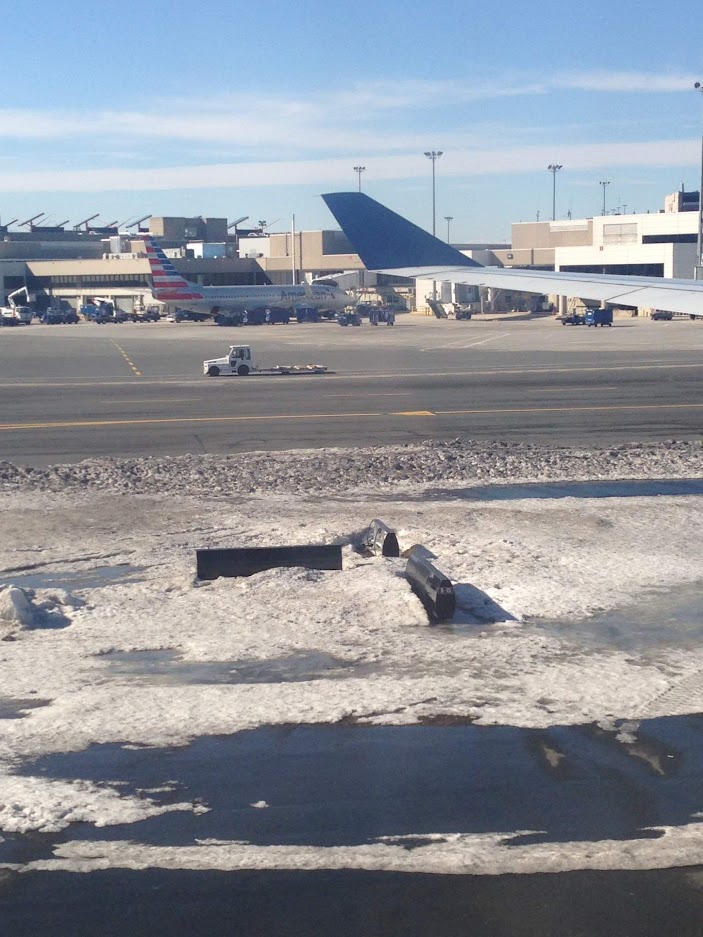 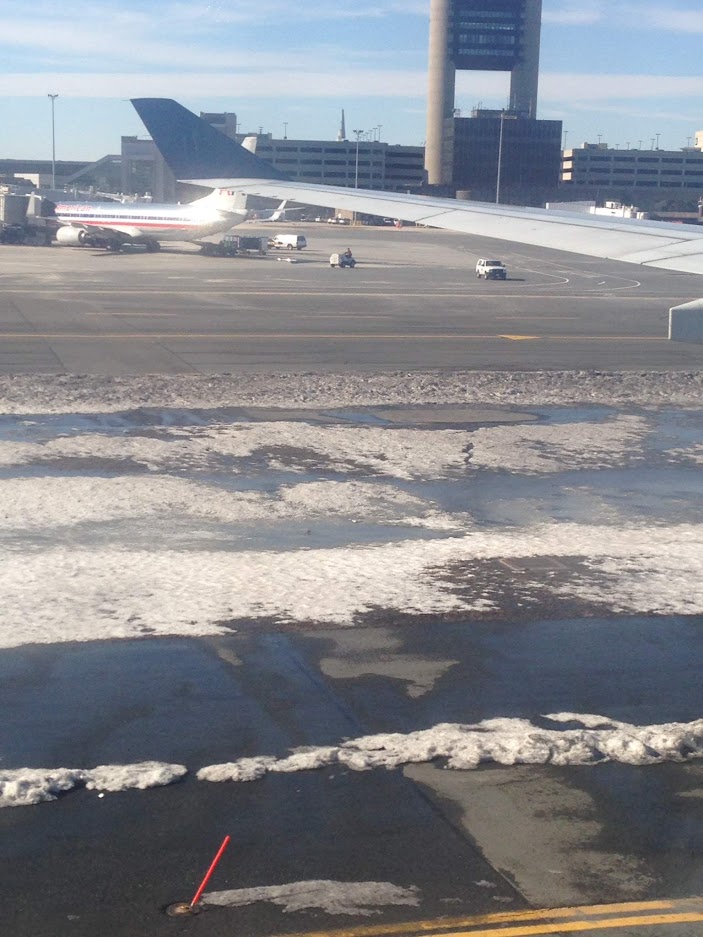 Old AA glistening in the sun 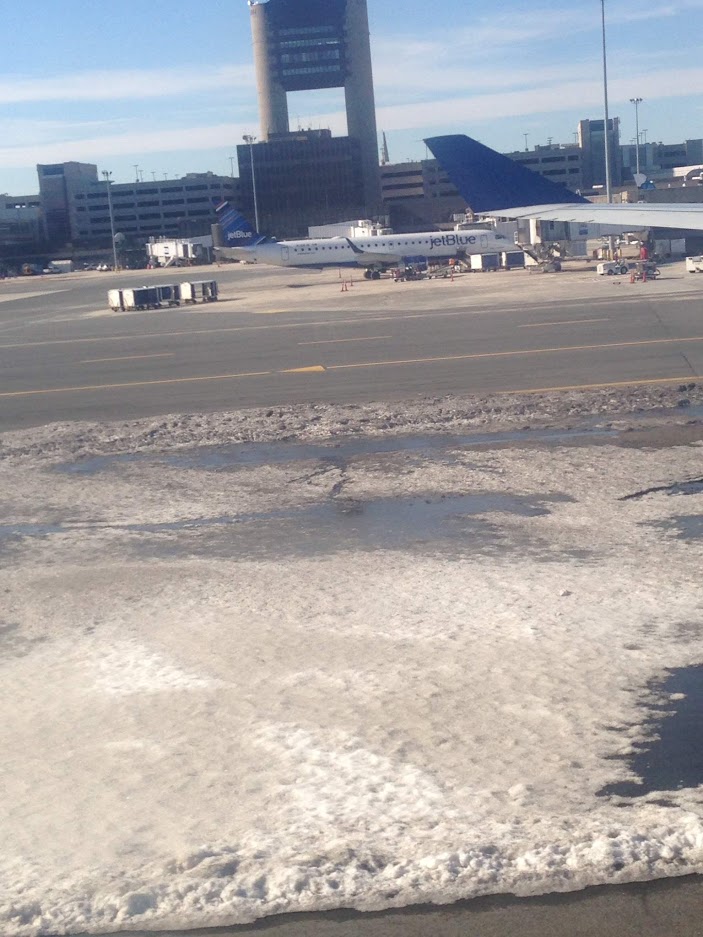 Re: From my Archives: Winter '14 From Sunny Spain to Snowy Boston, KLM and Delta to Boston

Good experience I guess. DL FAs are pretty nice in general, but you may of encountered an exception. I remember this year on a long haul there was this awesome male FA who was a bit chatty and had a great personality, and one that was like 6-10 or something with long arms. I guess it helps when you fly transpac
Top

Re: From my Archives: Winter '14 From Sunny Spain to Snowy Boston, KLM and Delta to Boston

It looks like the last little bit of this TR was cut off, so without further ado...

After a reasonably quick debarkation and US CBP I was out in the terminal and on the bus back home.

Summary
KL: Their hard and soft product were good, and I would love to try out their long haul
DL: Between the poor hard product (the seat) and the poor soft product (flight attendants and food) I will not be taking DL long haul anytime soon, and will try to avoid their short haul whenever possible.

As always, I have attached a copy of my log book which also contains all the scores that I have generated on past flights.