It’s always a treat to fly on a wide-bodied aircraft on a short flight. My TUI Boeing 787-8 flight from Manchester to Dubrovnik lasted around two-and-a-half hours and was a welcome change from the narrow-bodies usually found on such short flights.

Not so welcome was the 5:20AM scheduled departure time, though it did at least mean I would reach my destination with most of the day to spare, so swings and roundabouts I suppose!

Boarding was announced in good time and I was soon settled in row 5 of the economy cabin, which is in the typical Dreamliner 3x3x3 configuration. Most TUI 787s include a Premium Club cabin, though this aircraft wasn’t one of them, and a quick check of its recent flight history revealed a record of short-haul and medium-haul flights. I was flying on five-year-old G-TUID (named ‘Angel of the Sky’).

TUI’s 787 economy seat pitch is quoted as 33 inches (a couple more than British Airways’ 787s), and having flown on both examples I would say the difference in legroom is definitely noticeable. The cabin felt spacious and was equipped with the usual modern amenities, including decent-sized personal seatback TV screens, AC power ports, USB power ports and mood lighting. The Dreamliner is the flagship of TUI’s fleet, and it became clear during various announcements throughout the flight that they are rather proud of it. 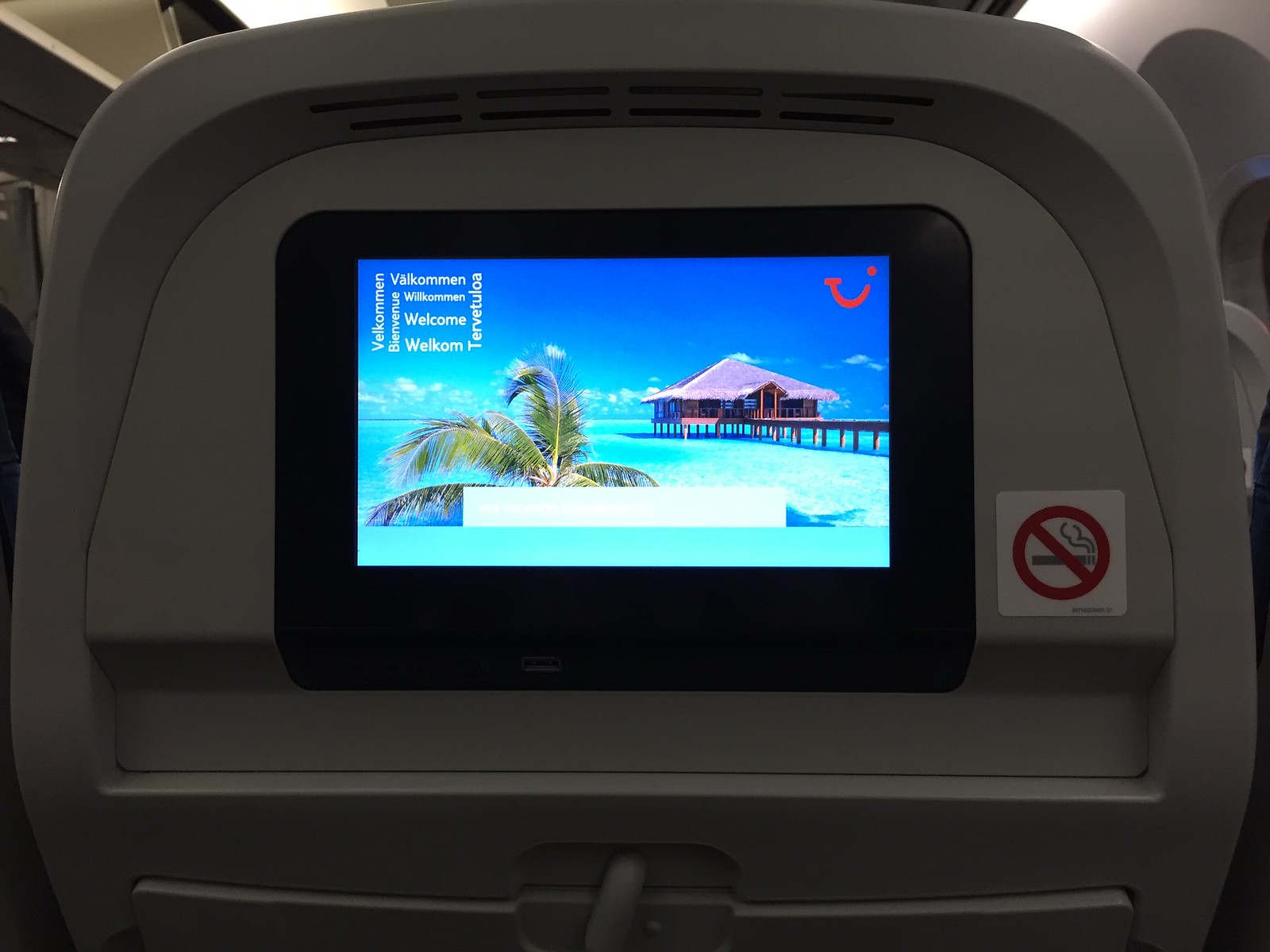 The boarding process was efficient, and passengers were invited to board in stages. The flight was pretty much full, though there were several vacant seats scattered about the plane.

The first PA was from the captain welcoming us aboard and introducing a three-person flightdeck crew: himself, the first officer, and (curiously) a flight engineer. He anticipated an on-time departure once the cargo holds were closed.

Sure enough we pushed back nicely on schedule and started engines as TUI’s engaging, Disney-like safety video played. We made a brisk taxi to runway 23R, the first scheduled departure of the morning. We took off into the predawn sky at 5:37AM.

The sun rose during our climb as a cabin crew PA outlined the order of service and features of the Dreamliner. Features promoted were the plane’s larger windows and the ‘TUI Wave’, a light show of sorts demonstrating the mood lighting. Seatbelt signs were turned off just five minutes after departure. 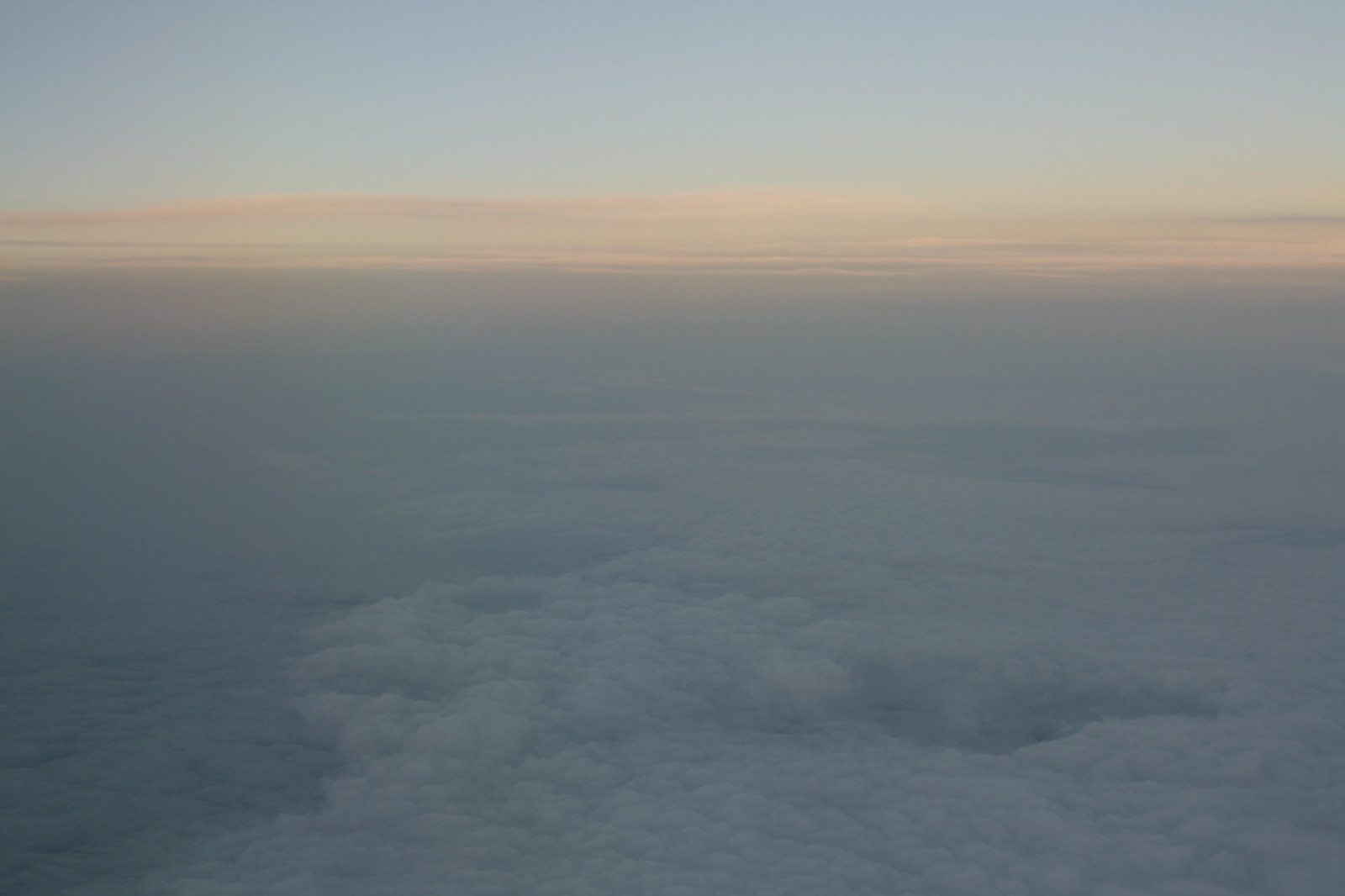 Around 30 minutes into the flight as we were crossing the English Channel, the captain delivered another PA advising us that we were cruising at 41,000 feet and would arrive slightly ahead of schedule. He reported warm and sunny weather in Dubrovnik. 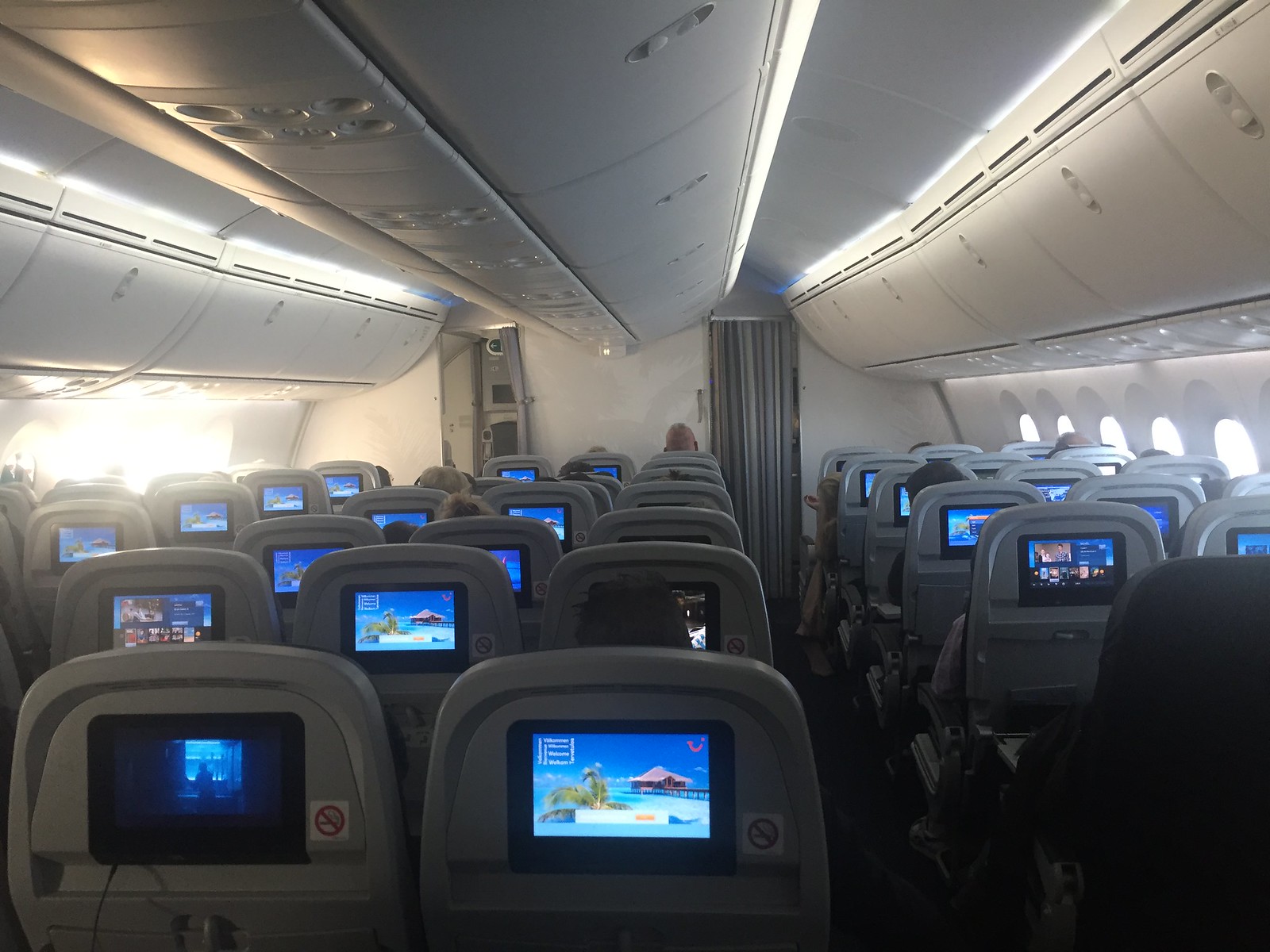 The service consisted of a buy-onboard menu. There was a decent selection of food and drinks (soft and alcoholic) available, including hot menu items such as ham and cheese toastie, bacon ciabatta and chips. I went for the ham and cheese toastie and a bottle of mineral water. It was unmemorable, but did the job. 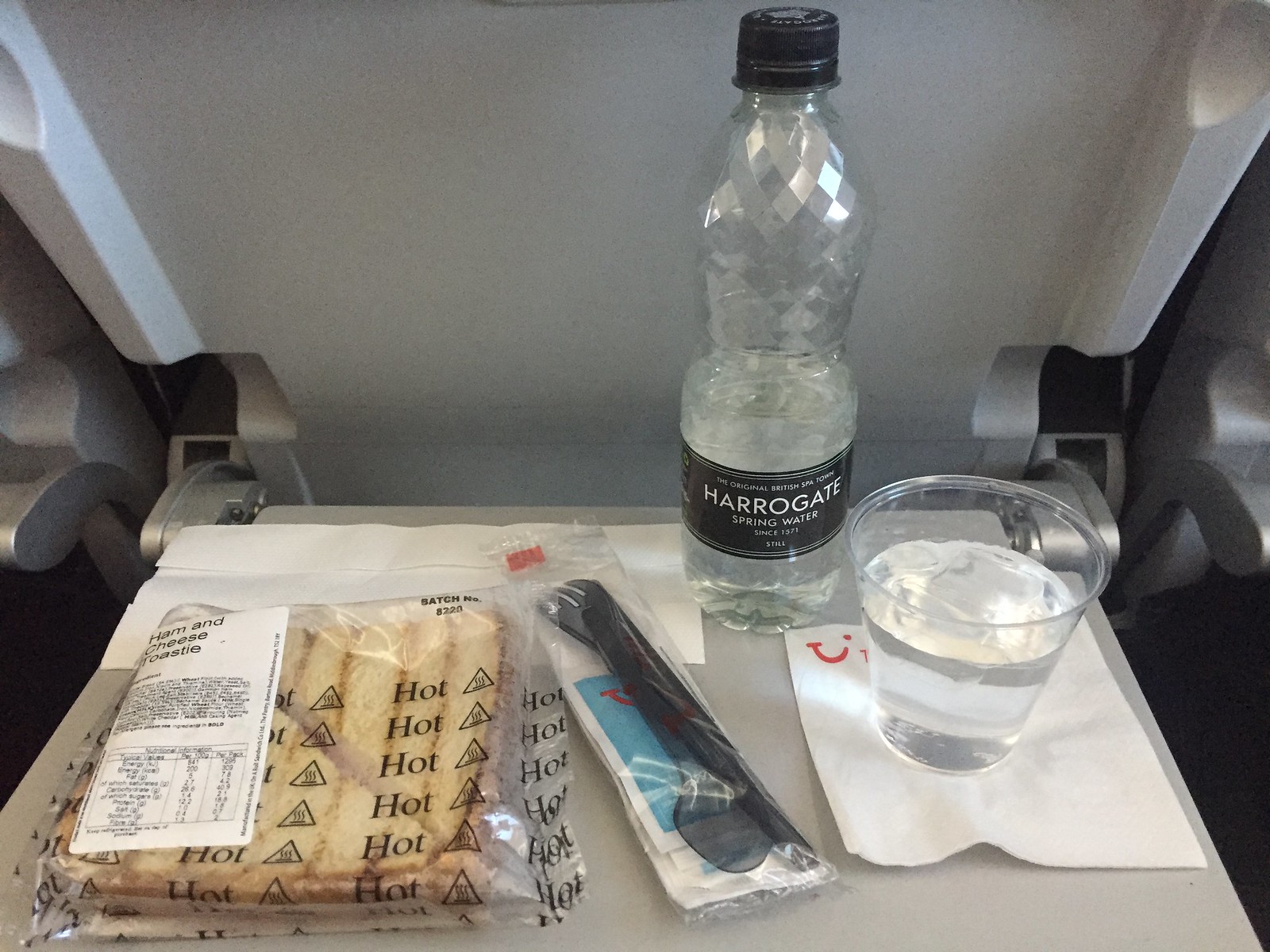 The cabin crew announced that the bar service would be offered once only, and advised passengers to ‘stock up’ on drinks if they required more later in the flight. Presumably this means one can’t go into the galley at free will to make additional purchases. Later in the flight, a duty free service was offered and passengers were also invited to enter into a competition.

The cabin crew were friendly, cheerful and worked efficiently. Being a charter airline, the vast majority of passengers (if not all) were travelling to Dubrovnik for a holiday. The cabin crew seemed to appreciate this and endeavoured to make the flight the beginning of people’s holidays. A nice touch was an announcement made for a couple travelling on their honeymoon, which invited a round of applause. The atmosphere aboard was certainly positive. 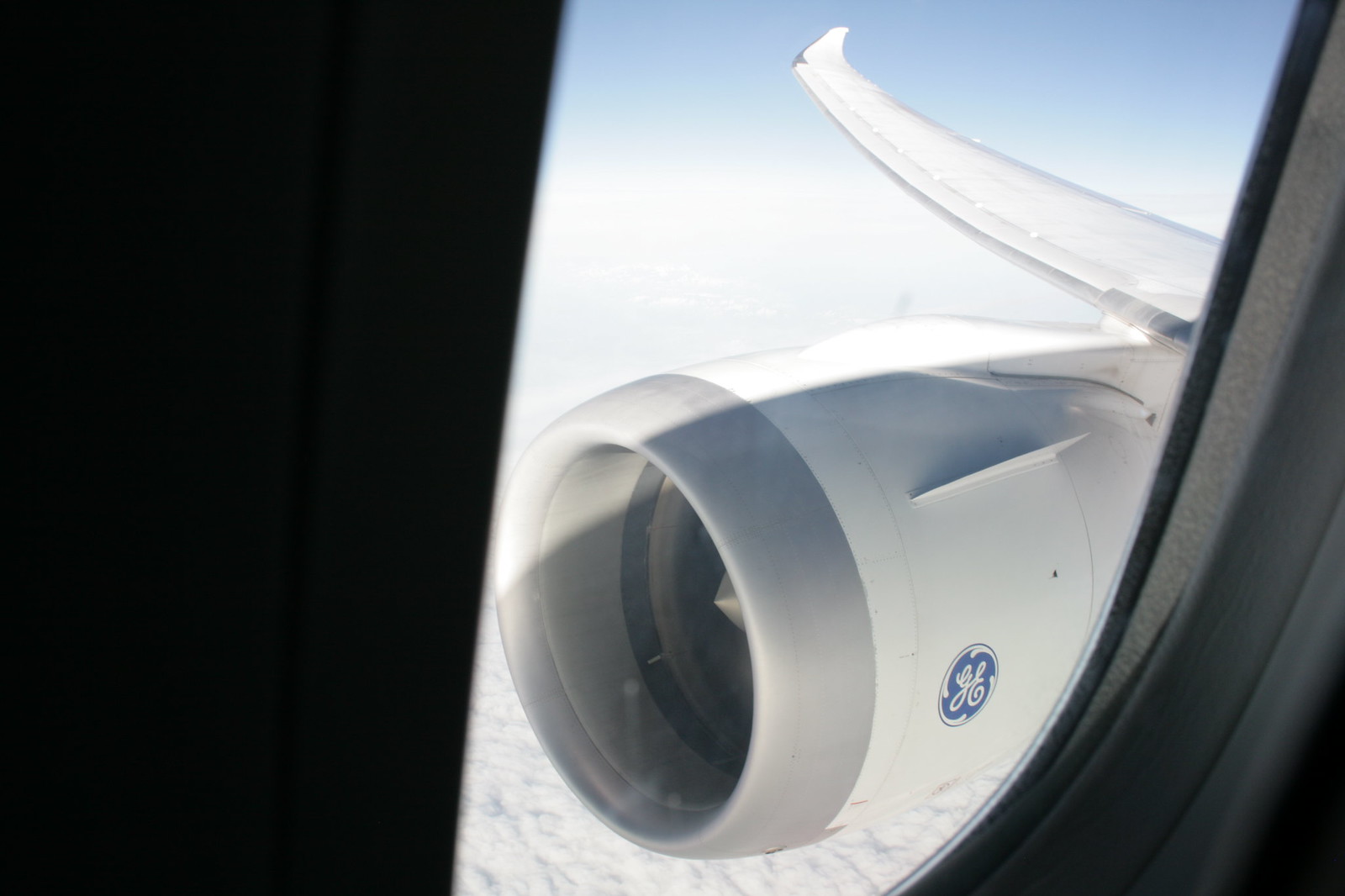 As mentioned above, the TUI Dreamliner has the primary mod cons one would expect to find on a modern airliner. The on-demand inflight entertainment featured two new movie releases, 20 or so ‘classics’, and a children’s selection, as well as a good selection of TV shows, including seasons, rather than just single episodes. Presumably a wider choice of blockbuster movies is available on long-haul flights. The TV screens are quite large and boast good resolution. It’s worth noting there was a charge of £3 (around $3.90) for earphones.

AC power ports, USB power ports, mood lighting and electronically-dimmable windows all contribute to the modern feel of the aircraft. The bathroom was very standard for a Dreamliner, and frankly could have been tidier.

Before I knew it, we were commencing our descent into Dubrovnik as the captain delivered his final PA. He informed us that we’d make a beautiful final approach over the city, and that the airfield sits around 500 feet above on a hill.

Unfortunately I was seated on the wrong side of the aircraft to see Dubrovnik Old Town, but it was nevertheless fun to spot the many ships from my view of the Adriatic Sea and various scattered islands. 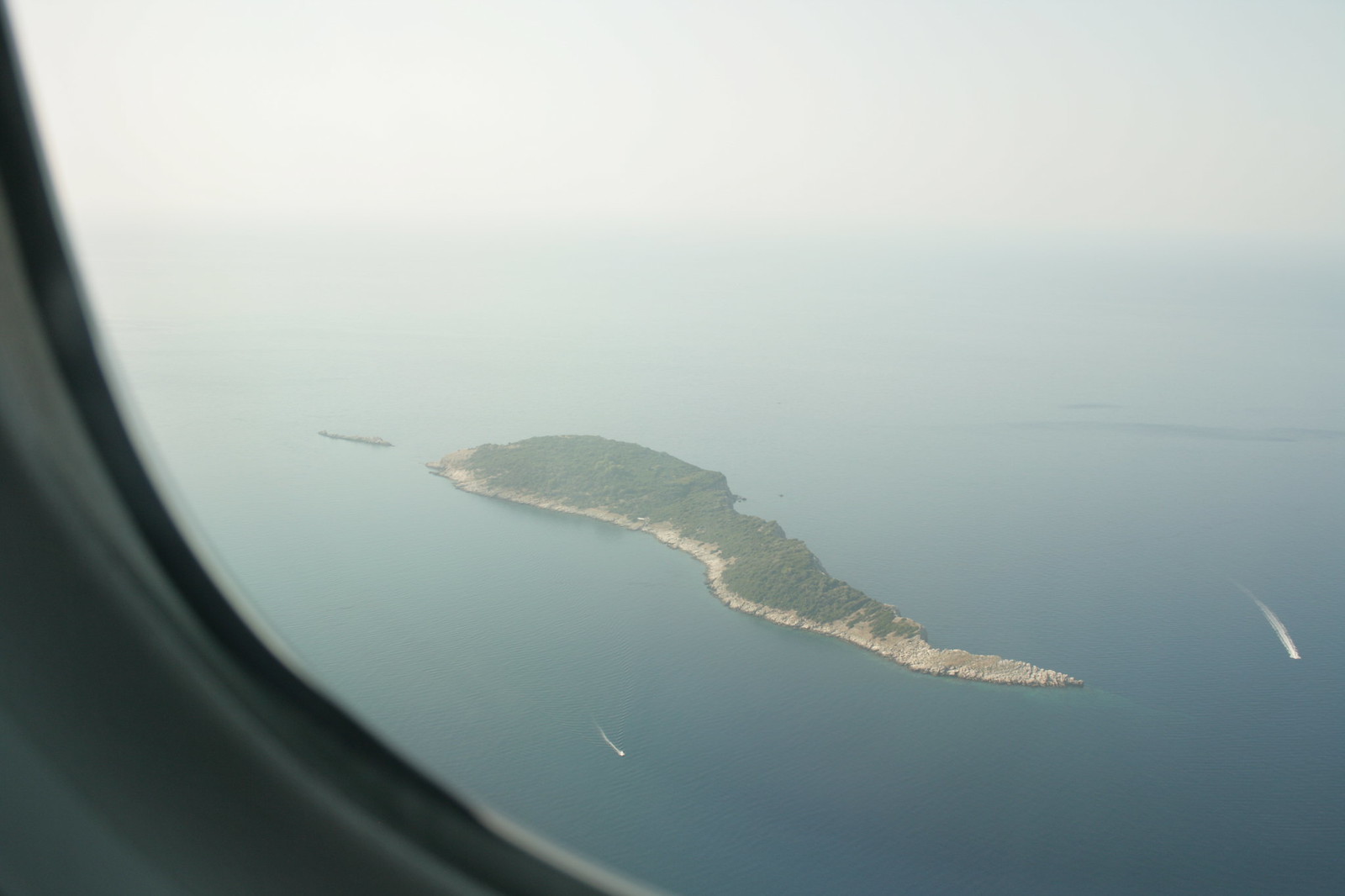 We touched down on runway 12 and parked at a remote stand, which meant we disembarked via stairs, affording a rather wonderful view and perspective of the aircraft. A bus was already waiting to transport us on the short ride to the terminal. 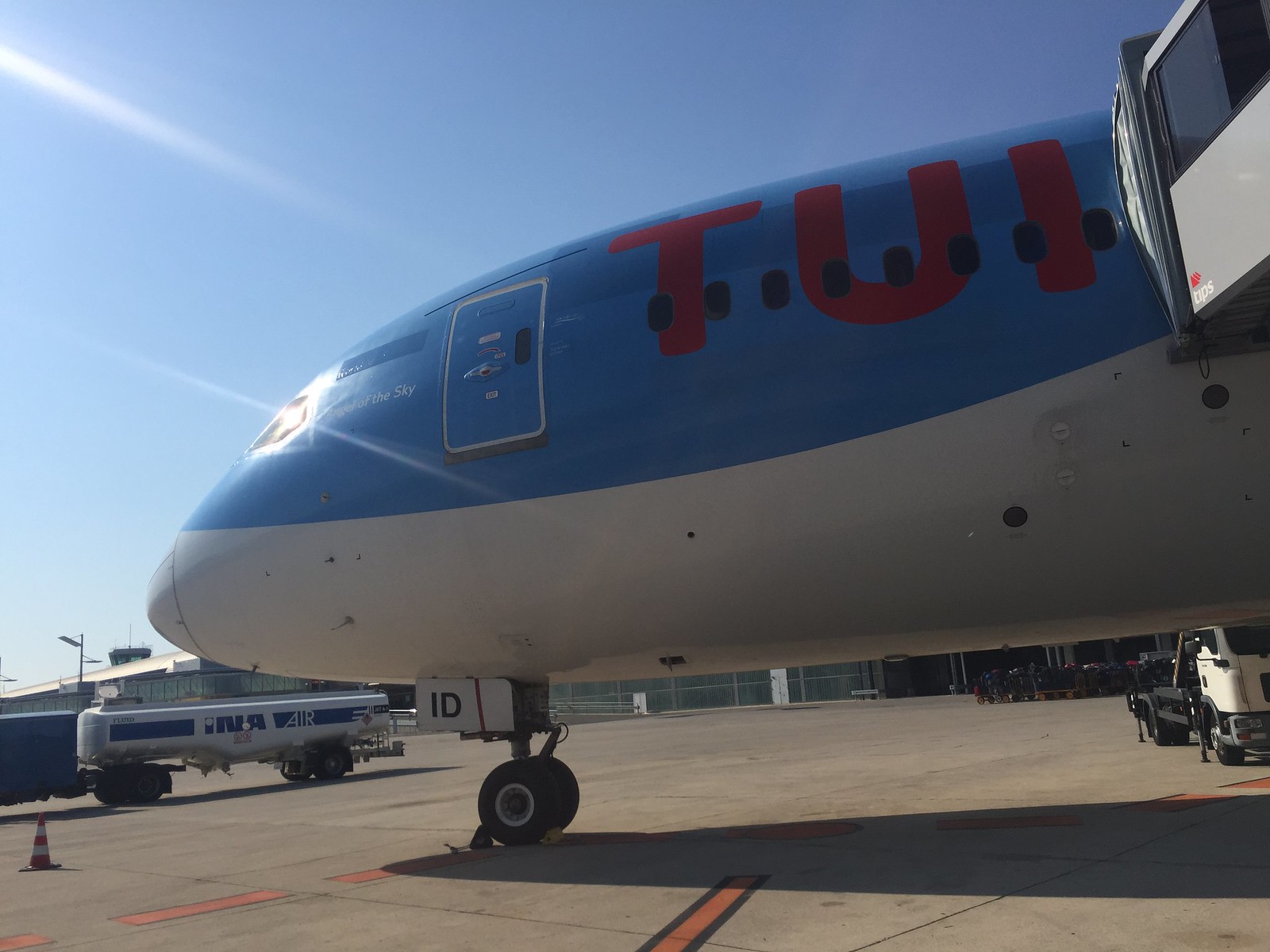 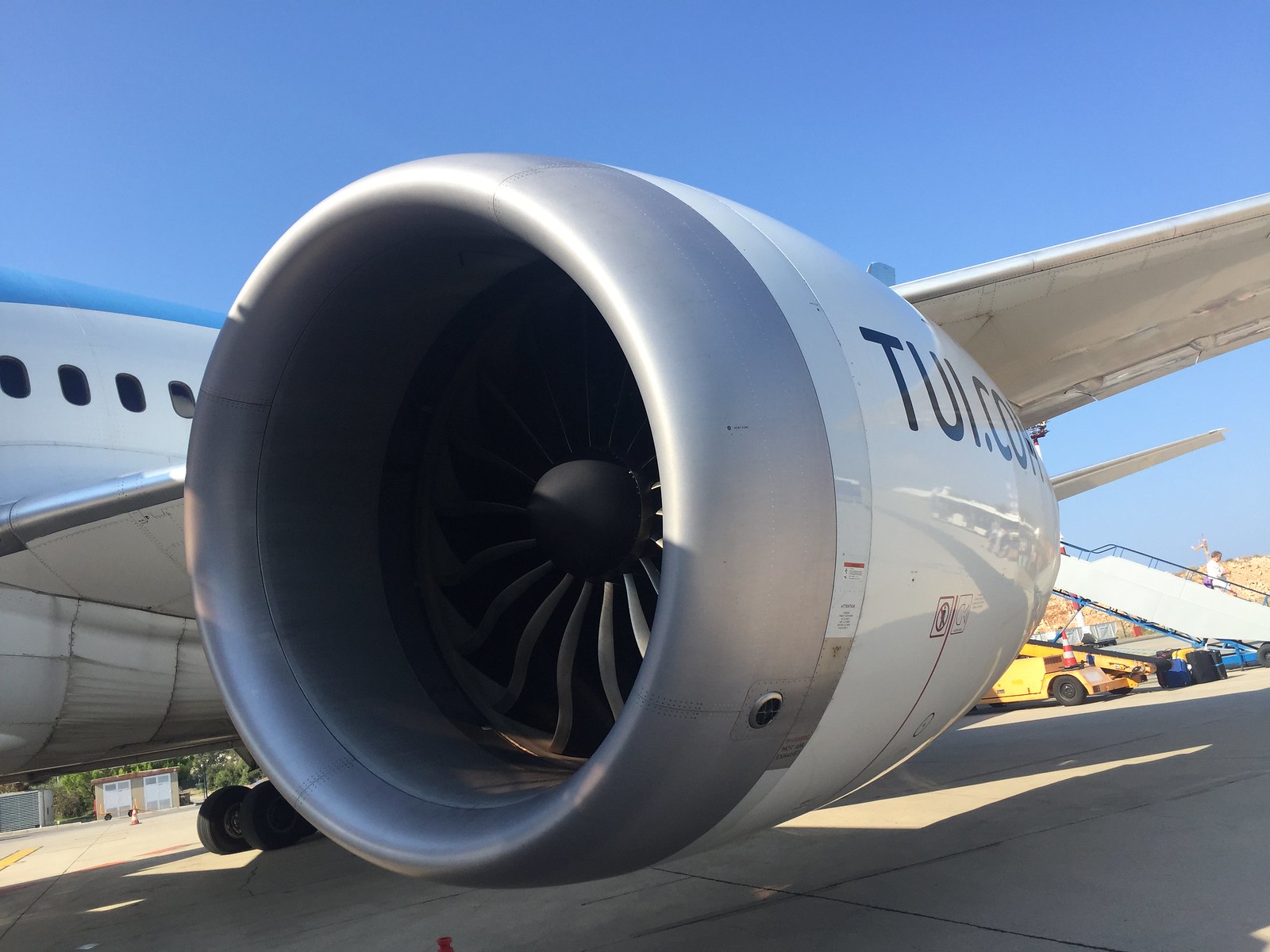 I rather enjoyed my flight on the TUI Dreamliner. The flight left on-time, the legroom was generous for economy, the cabin crew friendly, and the aircraft modern. Everything about the experience was seamless, so no complaints. Plus, getting to fly on a 787 on such a short flight is certainly a bonus!
Top

Thanks a lot! I enjoyed reading this and remembered good old times back in an LTU A 330 to Crete - with no IFE of course

Nice TR, btw. what will happen to these aircraft without PremiumClass in winter? Will they fly longhaul as well in all Economy or will they reconfigured?!

mchei wrote:
Thanks a lot! I enjoyed reading this and remembered good old times back in an LTU A 330 to Crete - with no IFE of course

Not true, all LTU A330's were equipped with the latest "state-of-the-art" IFE, with a blurry TV-monitor every 5th row or so... What's true and you properly mean, there were no PTV's in the backrest!
Top

debonair wrote:
Nice TR, btw. what will happen to these aircraft without PremiumClass in winter? Will they fly longhaul as well in all Economy or will they reconfigured?!

mchei wrote:
Thanks a lot! I enjoyed reading this and remembered good old times back in an LTU A 330 to Crete - with no IFE of course

Not true, all LTU A330's were equipped with the latest "state-of-the-art" IFE, with a blurry TV-monitor every 5th row or so... What's true and you properly mean, there were no PTV's in the backrest!

Probably do Canaries runs and some skiing
Top

I was this flight, did you hear the commotion 5 mins after take off? Possibly a medical issue
the captain has now dimmed the lights for take off this is a routine procedure for flights during the hours of darkness!
Top

samair wrote:
I was this flight, did you hear the commotion 5 mins after take off? Possibly a medical issue

Cool! Yeah, I did hear the commotion, but I have no idea what it was. Probably a medical issue, like you said.
Top

The joys of a long haul plane on a short haul - oh boy am I too familiar with these!! Thanks so much for sharing this