For our trip back home from Kyrgyzstan I needed a flight that would leave around the same time as my in-laws flight so that we could help them through immigration. Their flight back to Shijiazhuang was with China Southern via Urumqi (Which also entailed a 19 hour overnight transit

It was more than twice the price of the cheapest option with Pegasus (at £170), but at least we get to travel in relative comfort and at a decent time.

It would by my first trip on Turkish. It would also be my second longest trip on a narrow body jet, clocking at 6 hours block time, the first being my United B737-900 flight from LAX to HNL.

Booked via gotogate.com. After booking I was able to add details about my booking on Turkish website. I was even allowed to select exit row seats. It was quite odd, I tried to select seats and the only available seats for selection were the exit row seats, which seemed like there was a charge for it ($59). So I cancelled the selection and went back to manage my booking. Over there I could see that the seats which I had tried to cancel, had been selected and it was chosen! But I was not charged (yet). Not sure what was going on, so just ignored it for then.

I tried selecting seats around 50 days before departure and it worked well. Front and exit row seats were chargeable ($39 and $59) any other available seats were free of charge. I even got to choose the 2 seats towards the rear of the B77W on the way back from Istanbul! Happy about that!

I was even able to choose seafood special meals for my missus. A very Good online experience with Turkish thus far.

This is the last and final instalment in this series.

1. Virgin (on a rare A340-600) to Dubai -> for a quick 7 hour catch up friends
2. and then onward to Bengaluru on Jet Airways via Mumbai
3. India Domestic -> Bengaluru to Mumbai
4. A strange routing -> Mumbai to Urumqi with Air Arabia via Sharjah!
5. Part 5 trip to Kyrgyzstan - Air Astana from Urumqi to Bishkek via Astana
6. Finally return back to London from Bishkek on Turkish via Istanbul

Day before flight, OCI was a breeze. All our previous settings (Seats and special meals) were intact and was looking forward to the flight on Turkish on their B739ER and B77W.

Day of the flight, drive to the airport was a brisk 25 minute taxi ride.

Our check in for Turkish was super organised and quick. Done in 4 minutes. But for the in-laws, China southern was an entirely different ball game. chaotic and disorganized.

Check in desks for Turkish

Check in desks for China Southern

Interesting experience at the airport. Just before passport control a police officer caught my in laws and said that they haven't stamped their visa in 5 days and hence there is a fine of 10k som. I said keep the passport or else all I have is 40 GBP. There was a guy translating for us and he seemed to be the broker in this racketeering mafia. They agreed to this deal and I paid the translator/broker and passports handed over to us.!

Second time in 1 week I'd have to bribe my way out. The other being for apparently over speeding at 60 km/hr on the motorway where there was apparently a patch that was 40 km/hr. Yeah right! All part of the Kyrgyz experience.

Air side at FRU

Air Manas B738 heading to Delhi

Our ride to IST

Very clean and tidy aircraft. Welcome was warm and cordial all done with a smile. Seats were comfortable with very good leg space.

Boarding complete by 10 15. FA made a round distributing newspapers which I hadn't seen in a long time.
Pushed back on time and airborne by 10 35.

Up close and personal

Amenity kit on this flight

Announcements made in Turkish followed by English. Flight time of 5hr and 20 minutes announced.

Once reached cruising altitude, the captain made an announcement regarding the route for the day along with the speed and altitude for the remaining flight and wishing us a pleasant flight. Good communication.
Route was over Kazakhstan, Azerbaijan, Georgia and then over Turkey.

Really good socks for the flight

Enjoyed this movie. Quite an odd movie, but worth a watch. Could not believe that it was available to watch on this flight. It had not even released in the UK at this time.

Drinks and breakfast round commenced 90 minutes after take-off. The trays were quickly collected post breakfast giving us a good 3 hours to take a nap.

Continued watching a couple of movies and then closed my eyes for a bit.

Meal on this flight - tasted very good and I enjoyed it. Went well with the spicy bloody Mary. The sides, for a change, was very good too. Good hummus and the cake was yummy too.

Movie #2 - A good movie for the flight

Before I knew it, we had started our descent into Istanbul.

Service on this sector was very good. I had asked for a second round of bloody Mary which was duly obliged and as we were descending we needed some water and it was swiftly bought to us. A very good effort by this crew and they ran a tight ship for a full flight.

Flight landed well ahead of time and were parked at a remote stand.

At IST - Not heard of this airline before this

Being Bussed to the terminal

I know it won't be long until the new airport is opened. Until then, the transfer experience at the current airport is a bit chaotic to say the least.

Walking up to the security was fairly quick and the security screening itself was quick. But then you're thrust upon the main city free Area which is reminiscent of the grand bazaar in old Istanbul. Probably this is the peak time and it was all a bit overwhelming. The airport does have all facilities, including a barber if you wanted to have your hair cut. We were at gate 700 which was a good 20 minute walk from where we were.

Upon reaching the gates we realised that they had blocked both 700 and 701 for this flight, given that it was the 777 and it seemed like a fully packed flight.

Finally near our gates, ready to board

Bussed to the Aircraft

Our ride to LHR

Once on board, captain announced a smooth flight with a flight time of around 3 hours and 20 minutes.

We had pushback at 14 50. But as expected, given it was a busy time at Istanbul, we were way back in the queue. 12th in the queue.

While taxiing, the aircraft temperature was extremely hot.

It got a bit better after take-off. But still on the warmer side. It was nearly an hour after scheduled departure that we were airborne. Looks like a slightly delayed flight on arrival.

Similar reading material on board, except for the safety card

The music director of this movie is a close friend of mine The super talented, nice guy -> Raghu Dixit. I messaged him to let him know that his movie is on Turkish Airline.

I can watch this on repeat

Met the retro jet during our taxi. We had a long wait before take off

Cabin crew spring into action as soon as seat belt signs were off. Lots of people to feed in a comparatively short amount of time.

Wi-Fi on board didn't work as expected. It was paid for and even that was a bit spotty to get to the login page.

Service, once again on this flight was top notch.

Very good toiletries on board

View of our cabin after take off

Rest of the flight was uneventful in a good way. Landed slightly delayed but not a deal breaker. Bags collected and out of the airport by 6 pm.

You call this Premium Economy!!!?? Wow!

A very solid performance by Turkish on this routing. Clean air crafts, professional and courteous Flight attendants, very good food and entertainment, on time and a fantastic safety video. They are slight let down by the transit experience at IST. It was quick, but just felt a bit too over crowded. I guess this would change once the new airport has commenced operation.

Would gladly fly Turkish again and hope to soon.

So that is the end of this series of reports. It was indeed an epic trip and hope you liked this series.

If things go as planned, my next report would be our trip to the famous Ice Hotel in Sweden, in December.

Until then, I shall leave you with a few snapshots from our trip around Kyrgyzstan.

Until next time, happy and safe flying, adios! 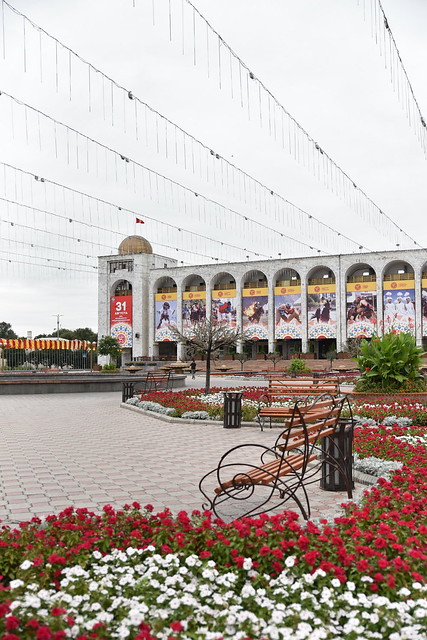 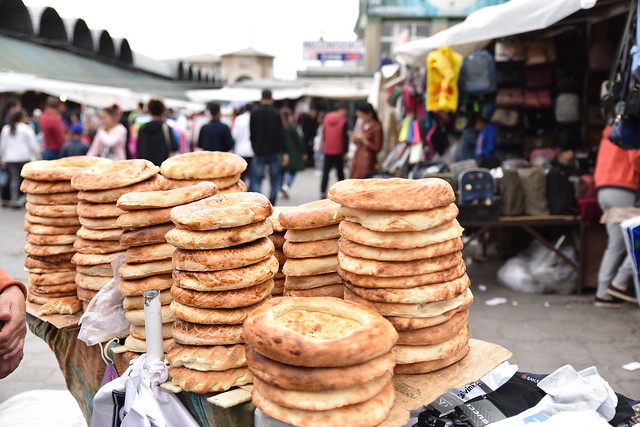 Being a local at Victory Square, Bishkek 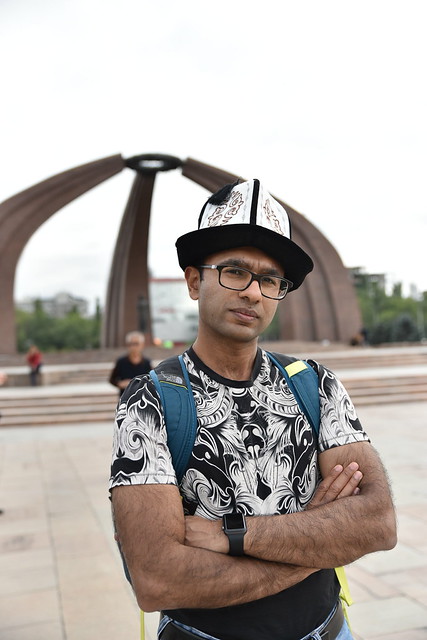 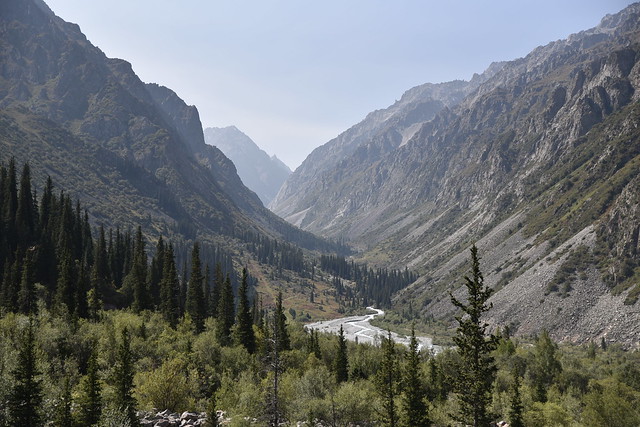 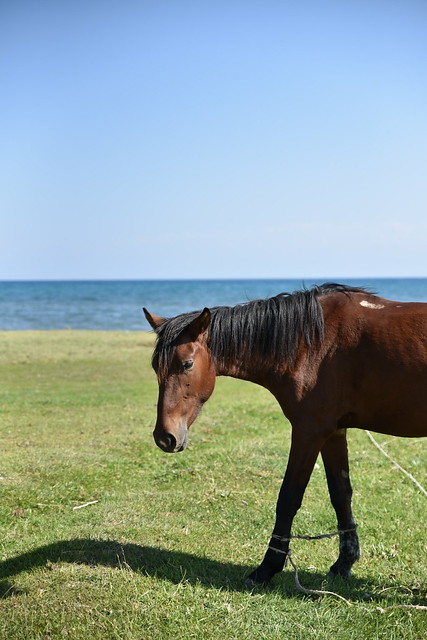 Lucky to experience the World Nomad Games, 2018, whilst at Kyrgyzstan 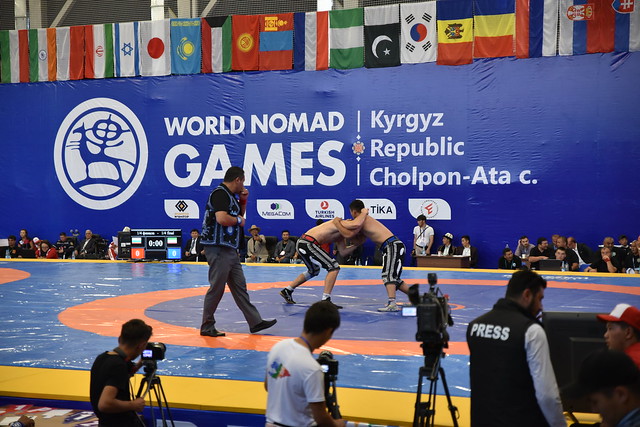 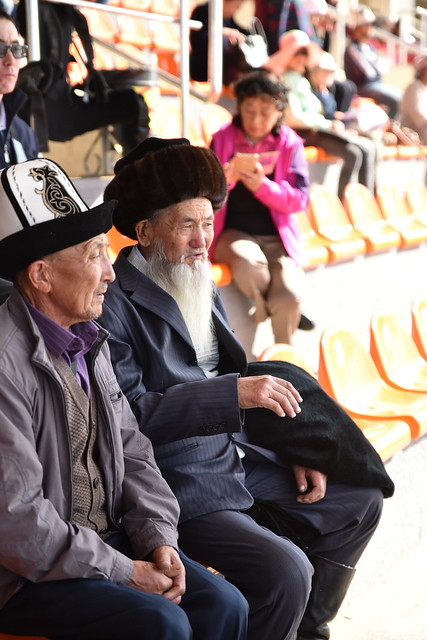 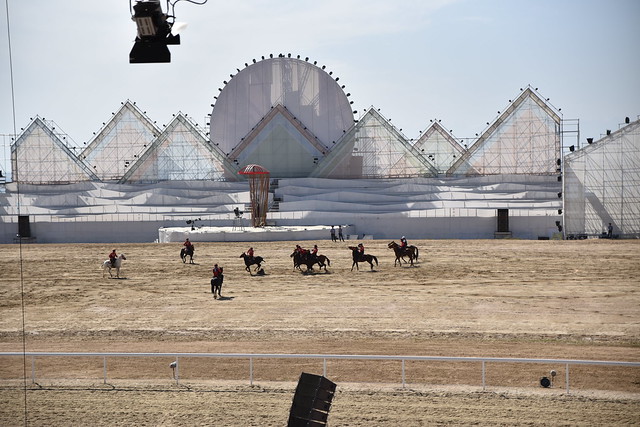 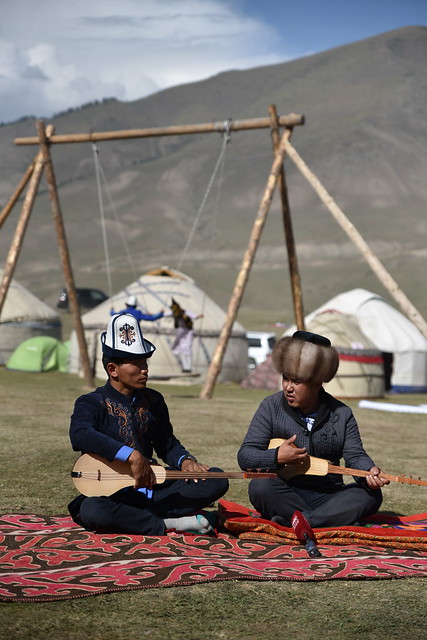 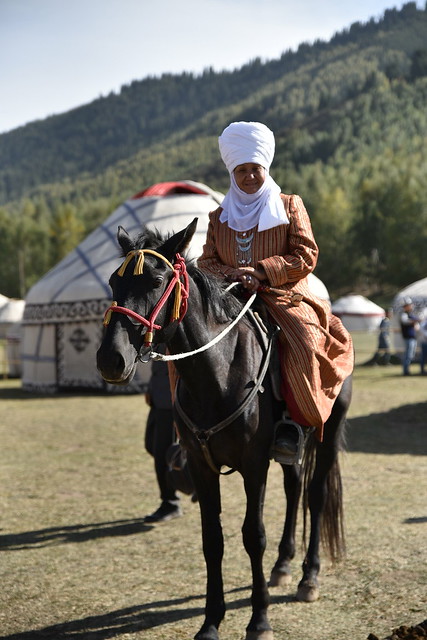 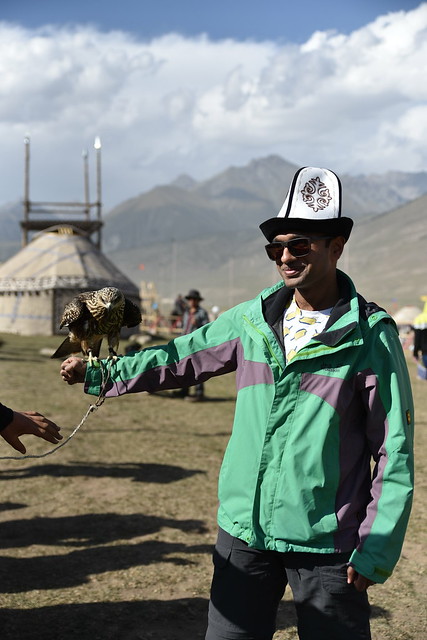 Our ride for the trip (me inspecting the tyres), with the 7 Bull mountain in the background 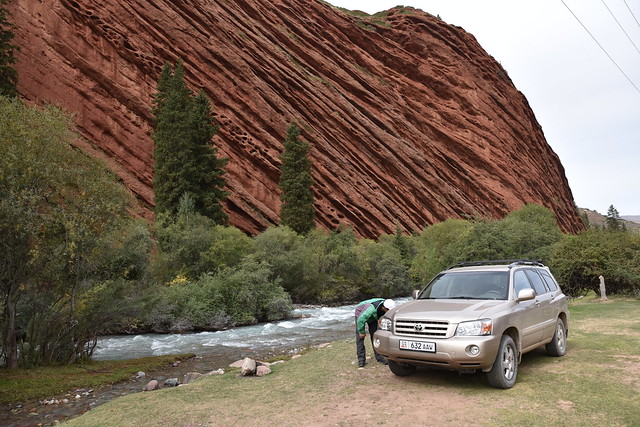 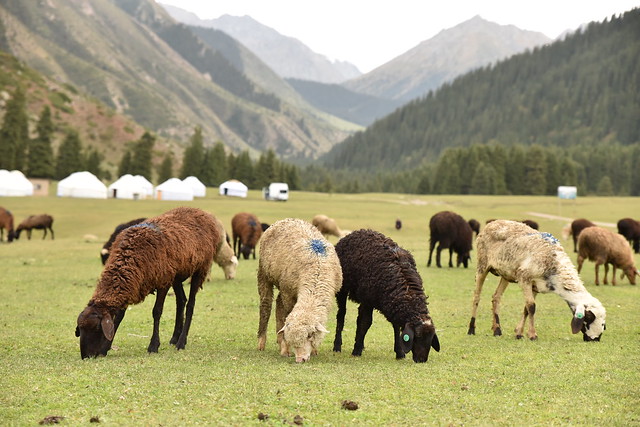 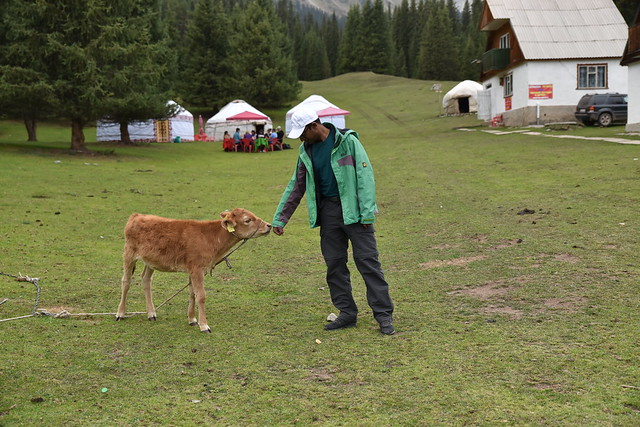 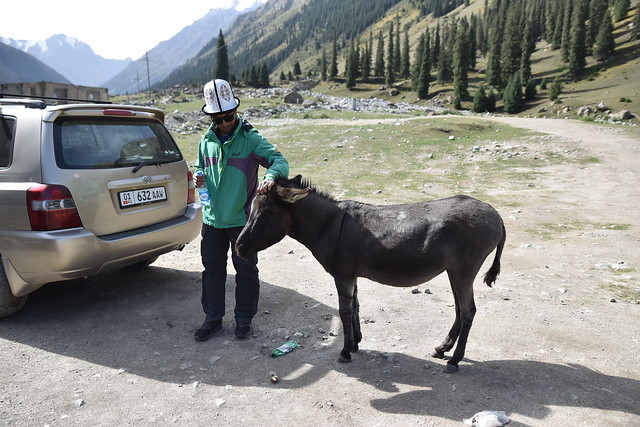 Fooling around at Fairy-tale canyon "Skazka" 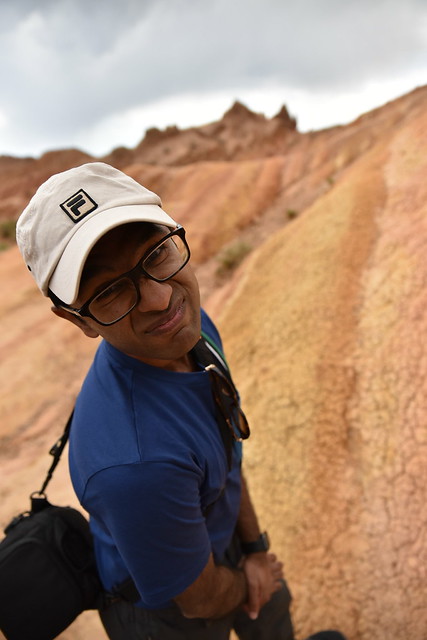 Great trip report as always. I'm not a fan of the egg chasing game but the stadium is not the Emirates but Twickenham Rugby stadium . The smaller stadium in the background is another Rugby stadium called the stoop, home of Harlequins RFC
Top

Thanks for the comments GaryDay
Ah! I knew I got that wrong

Thanks for the info.
Top

Very nice trip report as usual. Thanks for the great pictures! Looking forward to the ice hotel report!!
Top

Fantastic pics! I visited Kyrgyzstan early this year whilst on a 3 week Central Asia trip, and I really fell in love with the scenery, Bishkek and the people. I'm sorry and surprised to hear about the bribes though.
Top

Thanks for the comments DDR. I am looking forward to it too

Thanks opticalilyushin (:))
Yeah, wonderful country. I am not surprised by the cops, coming from an Indian background, it was my way of life.
Top

The picture of TK's "premium economy" was actually their J cabin.
FOR THE LOVE OF GOD BRING BACK THE PAYWALL!!!!
Top

Thanks LAXDude1023
Ah, was it? I thought they used to have a Prem Economy cabin and did not see anything else. So assumed this was their Prem economy cabin.
Thanks for the correction.
Top
Locked