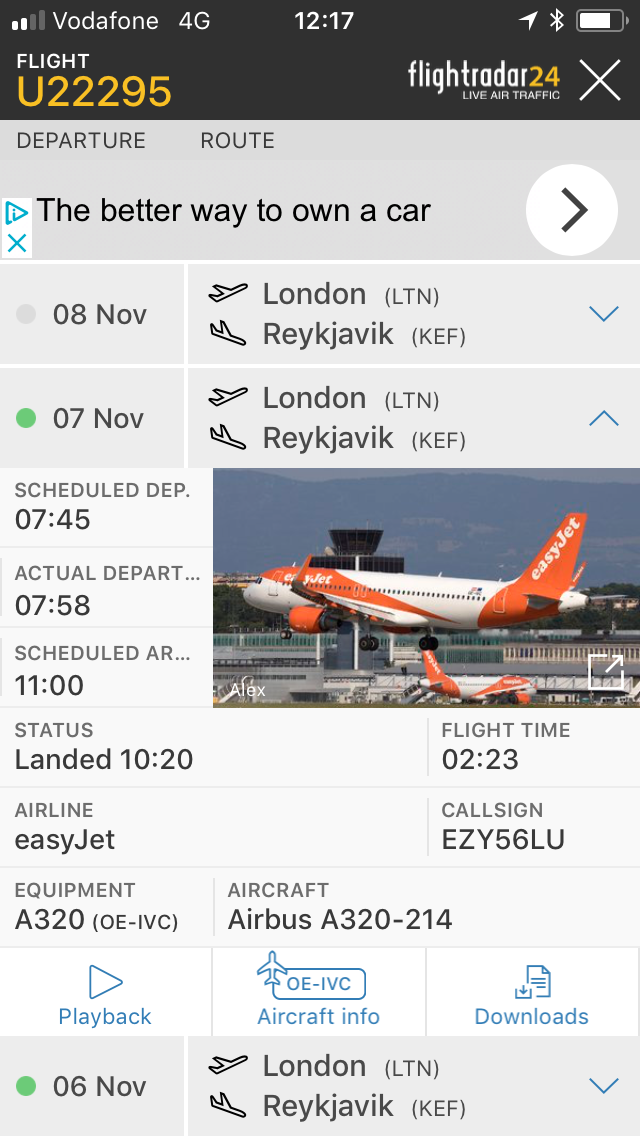 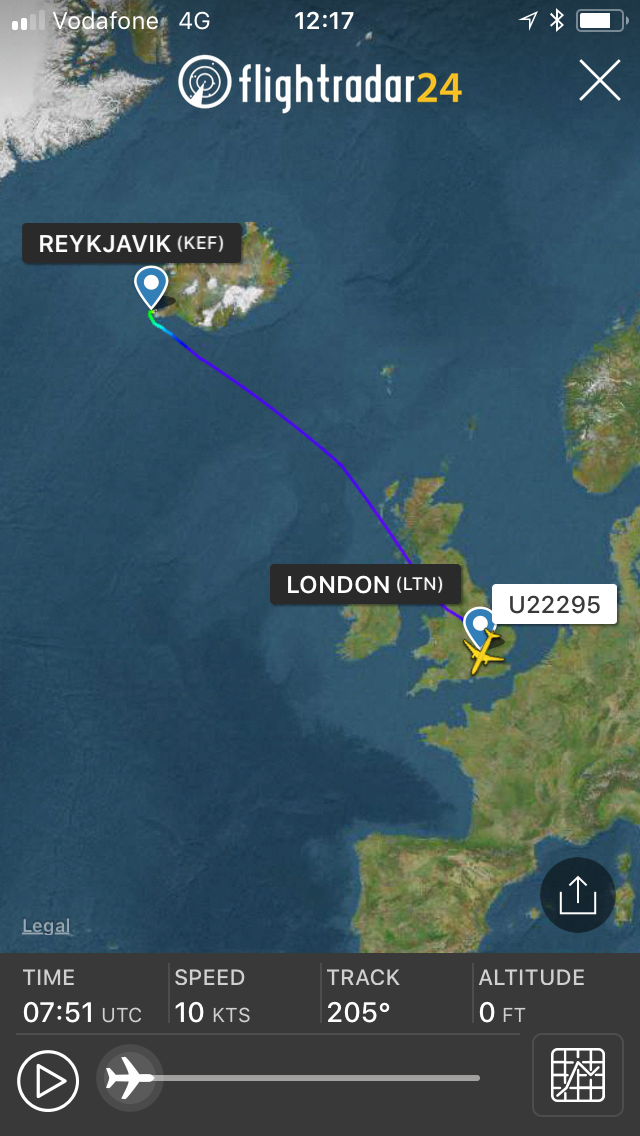 So, (Sl)easyjet. When I worked at Stansted in 1996 I remember this oddball airline, who’s flight attendants wore jeans, occasionally diverting from Luton.

Roll forward 22 years and I found myself at a photographer’s gallery event in London. I can’t claim to attend many of these, but I did once have a sideline arranging after work networking events. So I know that quite frankly, far from wealthy art lovers, most attendees are simply freeloaders who keep an eye on Eventbrite for happenings with free alcohol (hey, I was there after all!). The photography was very good and can be seen here, https://www.instagram.com/benjaminhardman/. After the gallery feeling inspired for a trip back and after a few cocktails I got drunk and booked flights to Iceland - a bargain at a little over £40 return.

One downside of this particular flight was the 0745 departure from Luton, which doesn’t work from where I live. My friend was flying into Gatwick and we agreed to meet the night before at St Pancras before catch the train to Luton Airport Parkway and the Ibis Budget. 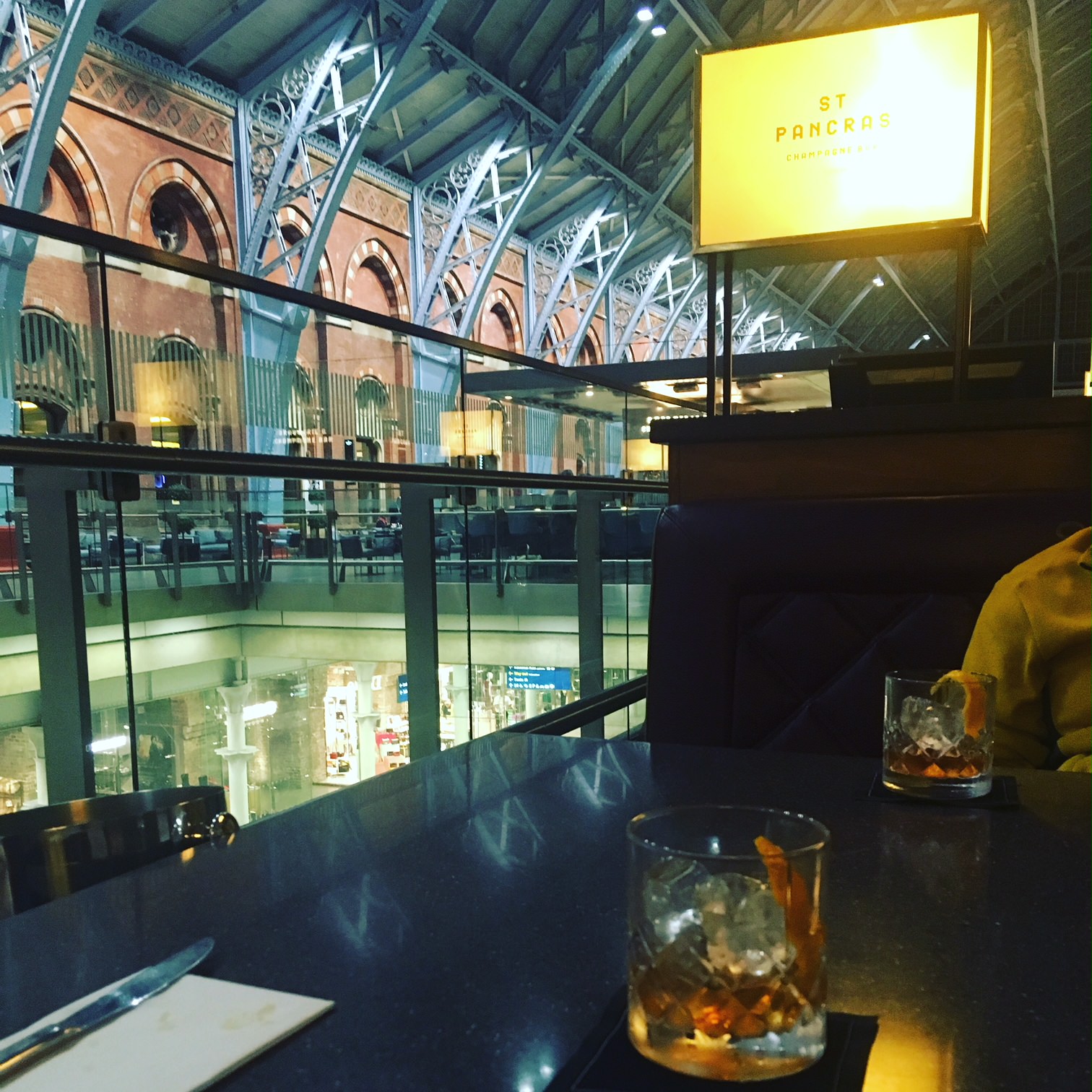 Walking into reception there were two large very drunk and very noisy groups. It turned out they were (Sl)easyjet crew. I know this, because one of them literally dragged my friend out of the corridor into her room, he rejoined me 20 minutes later. Throughout the trip she was sending photos which, well, you wouldn’t want to share on airliners.net, but she was living the easy brand…….

Any ho, next morning I’d checked in on the easy jet app, so headed straight for security. There were no queues, but it was somehow quite chaotic. None the less time wise, walking in the building to catching breakfast took maybe 15 minutes. 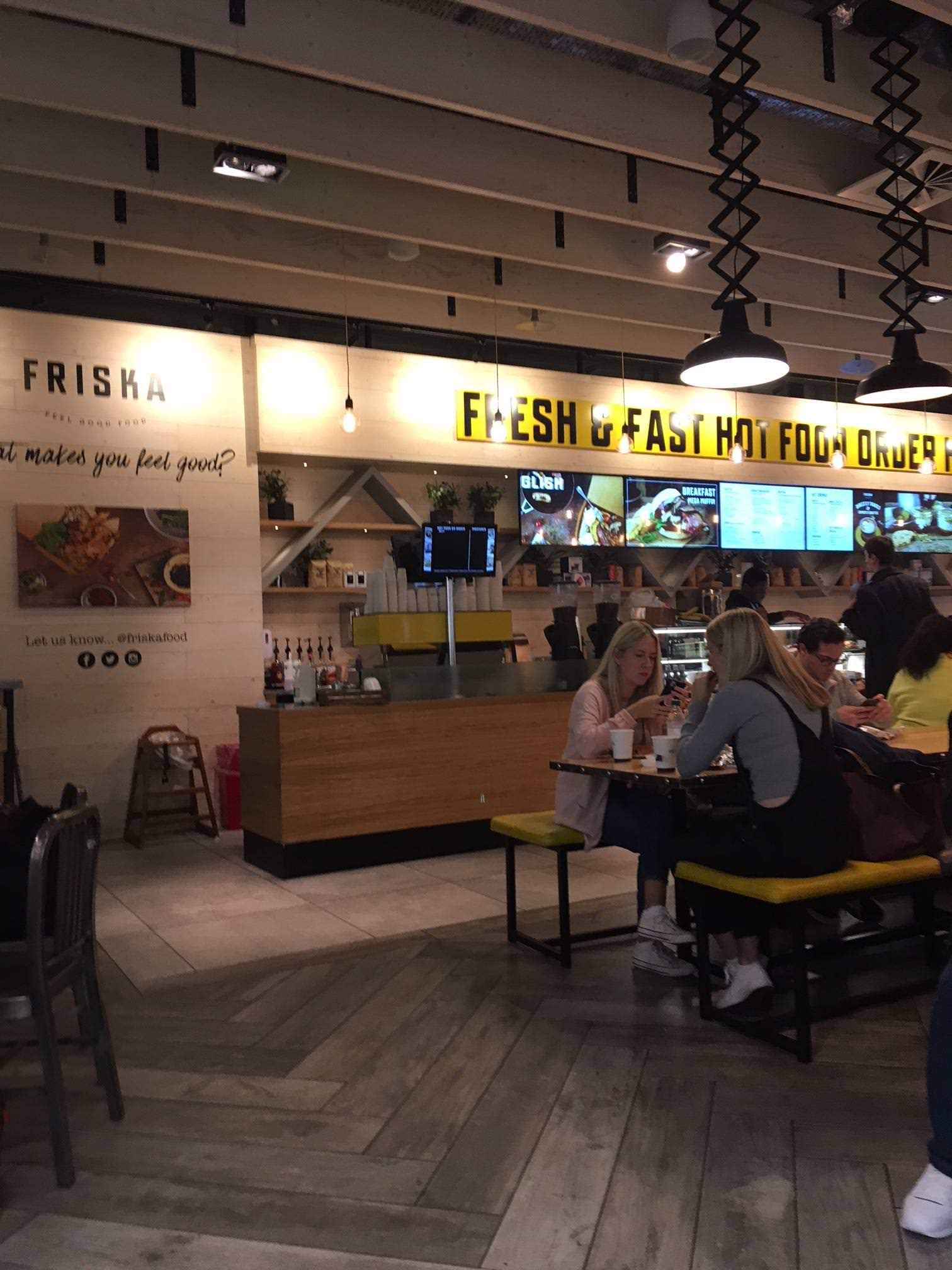 One particularly odd feature of Luton’s departure lounge was piped bird song and classical music. I assume this is an attempt to calm the stressful experience, but it was a tad odd. Our gate was posted at 0700, a longish walk to Gate 7. Before long we were boarding, well kind of, perhaps I should say before long we were queuing in a stairwell. 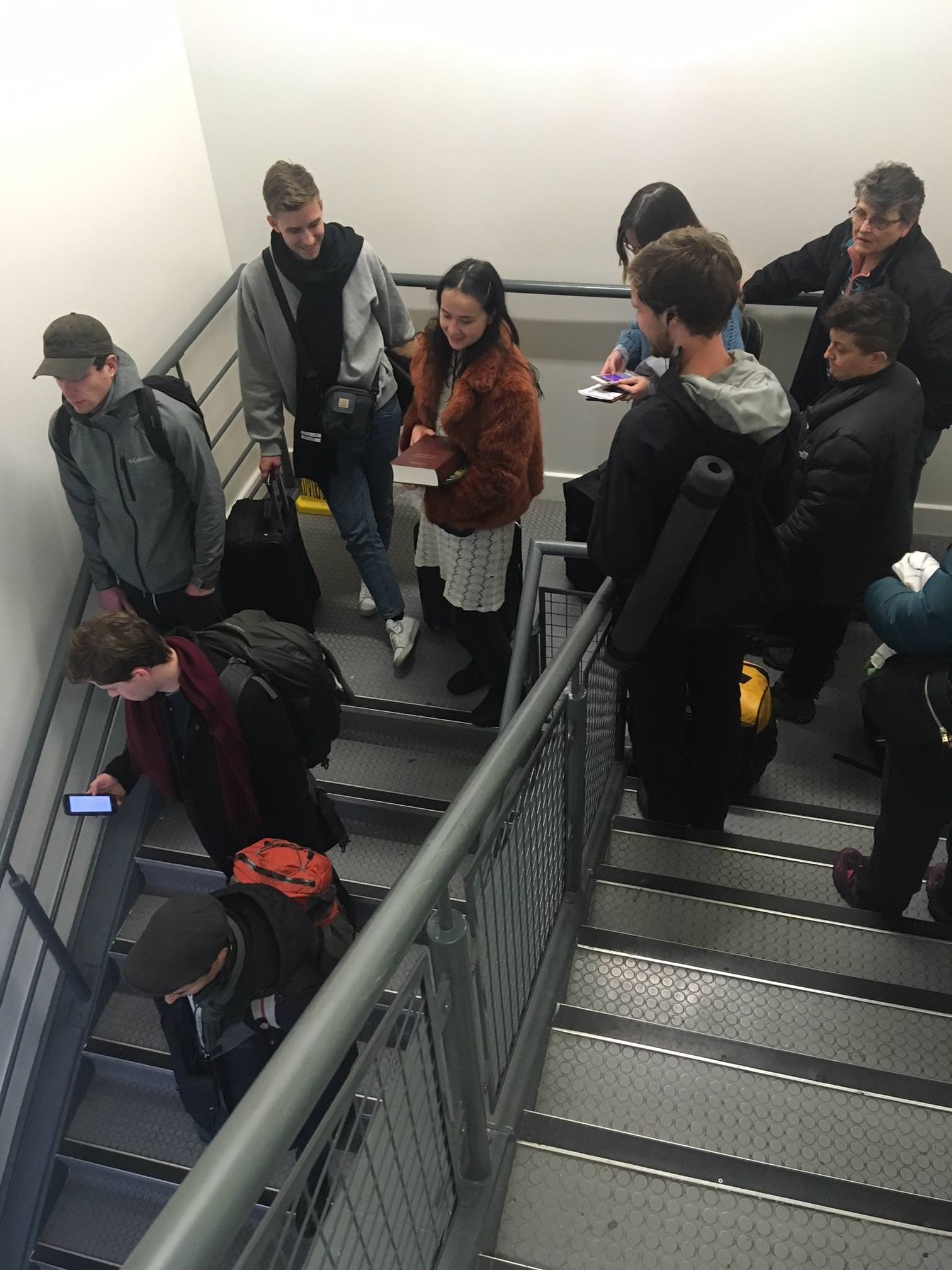 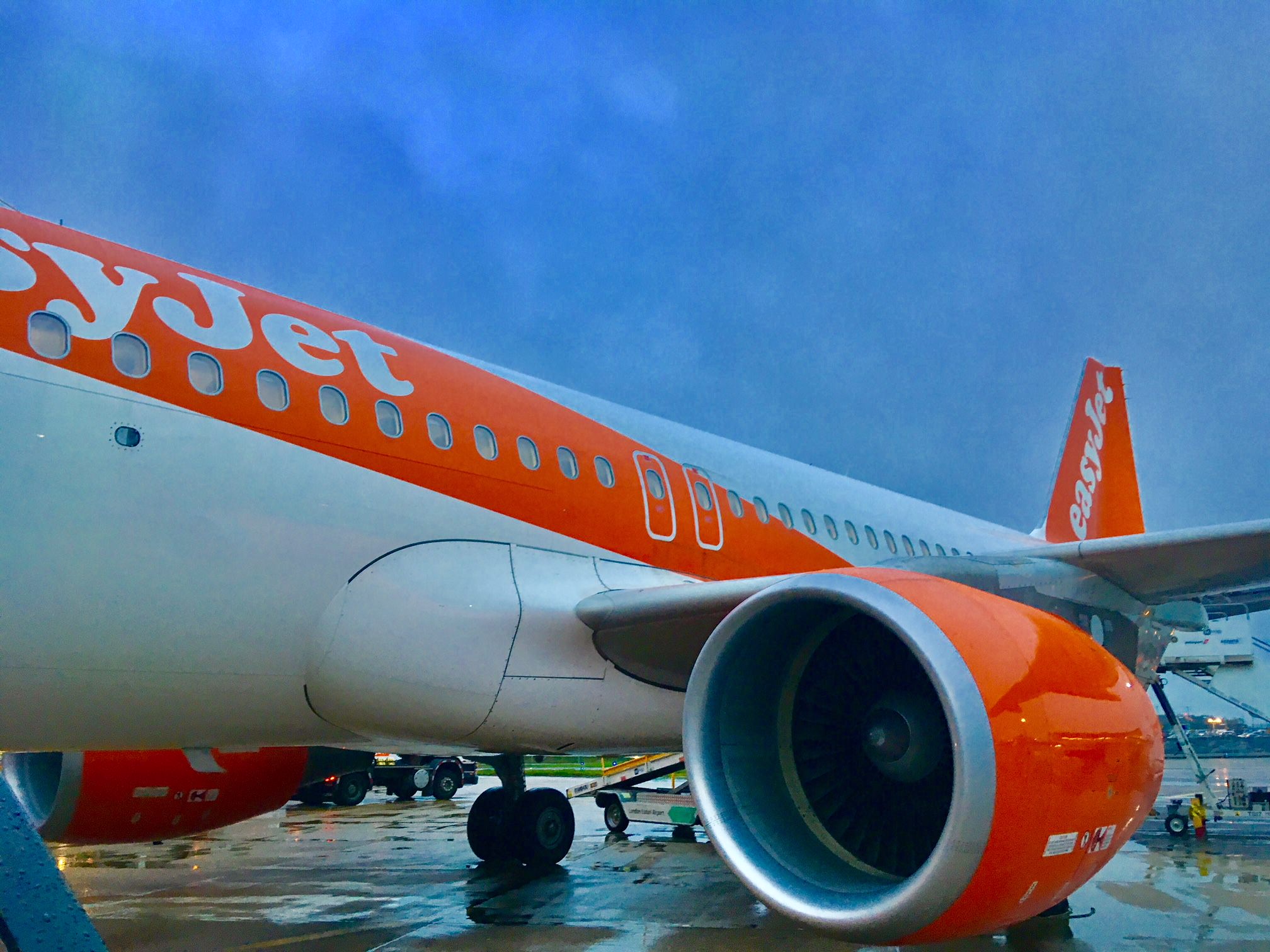 OE-IVC was delivered to Easyjet in November 2016 and moved off shore to the Austrian register a few weeks ago. It features winglets and Easyjet’s current interior very grey interior. The seat is that used by Air France and soon British Airways. There are no mod cons. On gripe is that unlike the Lufthansa variant of this seat the literature pocket is at knee level, which does reduce space, only by half an inch or so, but in a tight configuration that is annoying. 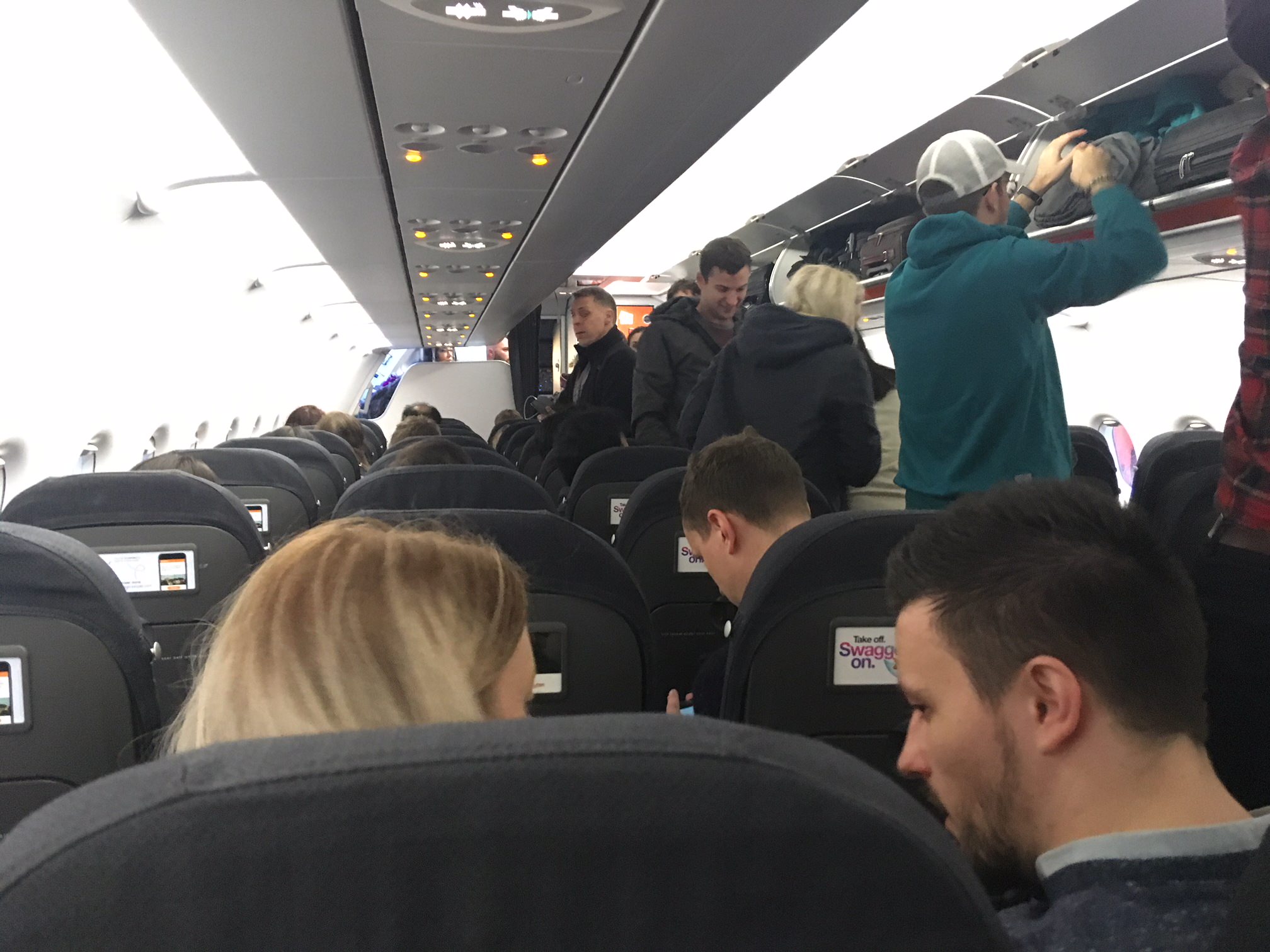 The crew welcomed us aboard and stood centre aisle whilst doing so, which felt more personable than hiding away and reading from an i pad. The captain also made a thorough announcement, advising us that it would be a fast 2h 20 min flight without air traffic delays.

We made a sporty took off to the east before climbing off into some heavy cloud. The inflight trolley service came around within about ten minutes of take off. It’s noticeable that in the last few years inflight prices have come down as airports have opened more food offerings. 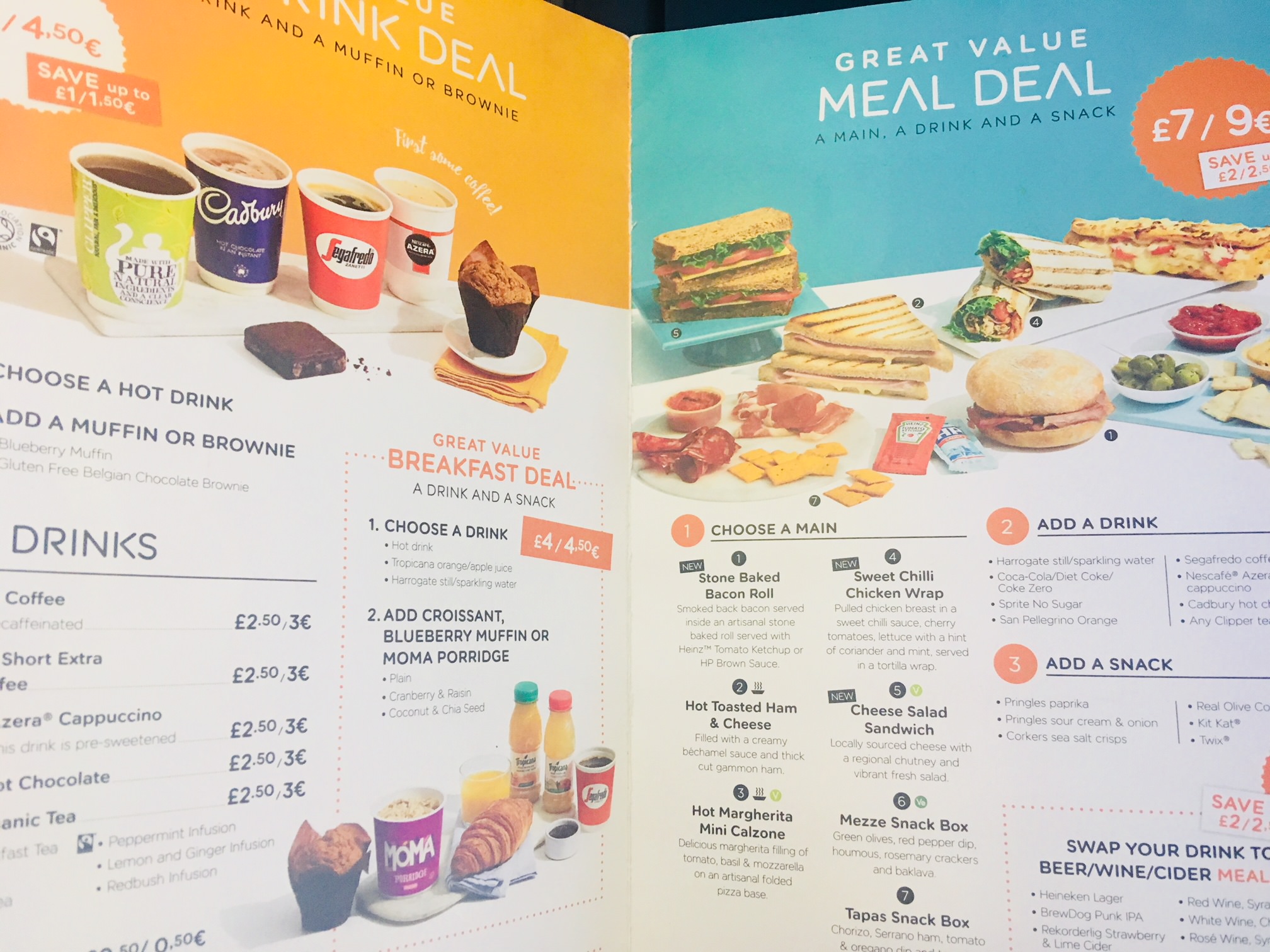 I listened to podcasts and music downloads for most of the flight. The cabin was fairly active with quite a few people walking around. 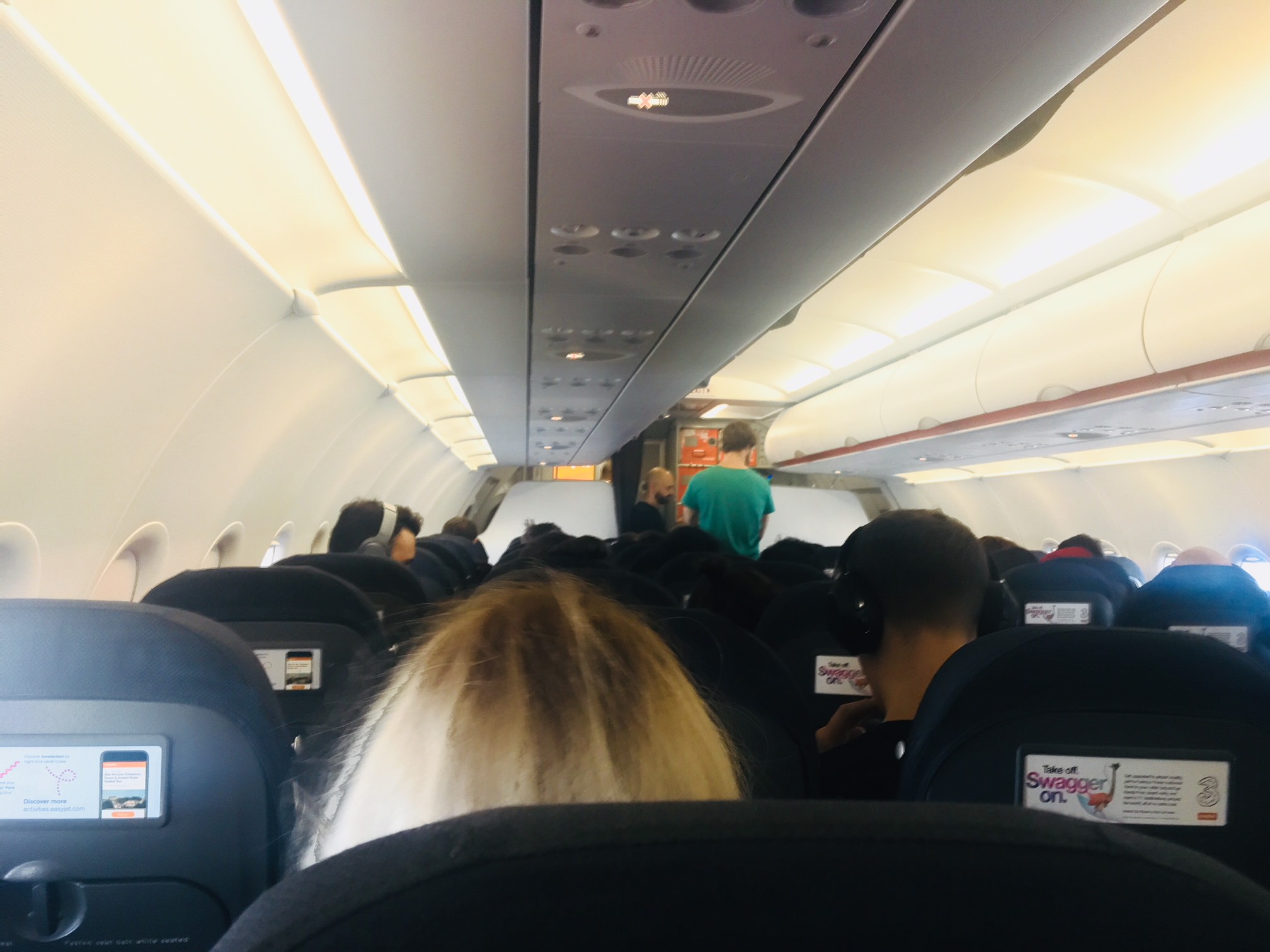 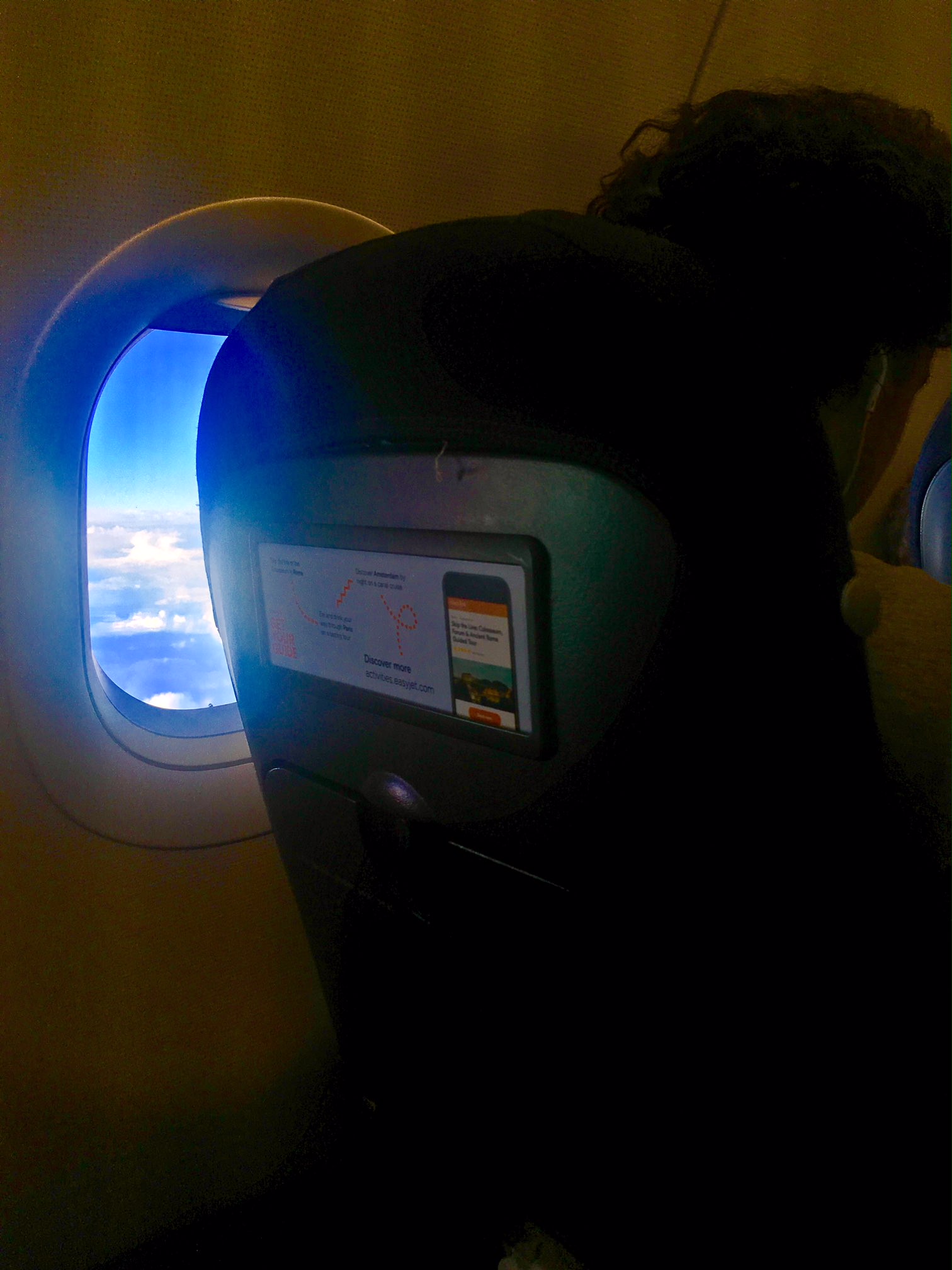 Shortly after that the captain announced we were flying along the Icelandic coast but that due to cloud cover it wasn’t visible. Fortunately the rain had stopped and wind calmed down.

With a strong head wind ground speed on landing was very slow and we rolled slowly with minimal breaking.

There must have been 20 or so Icelandair and Wow aircraft sat seemingly in storage as taxied towards our gate. 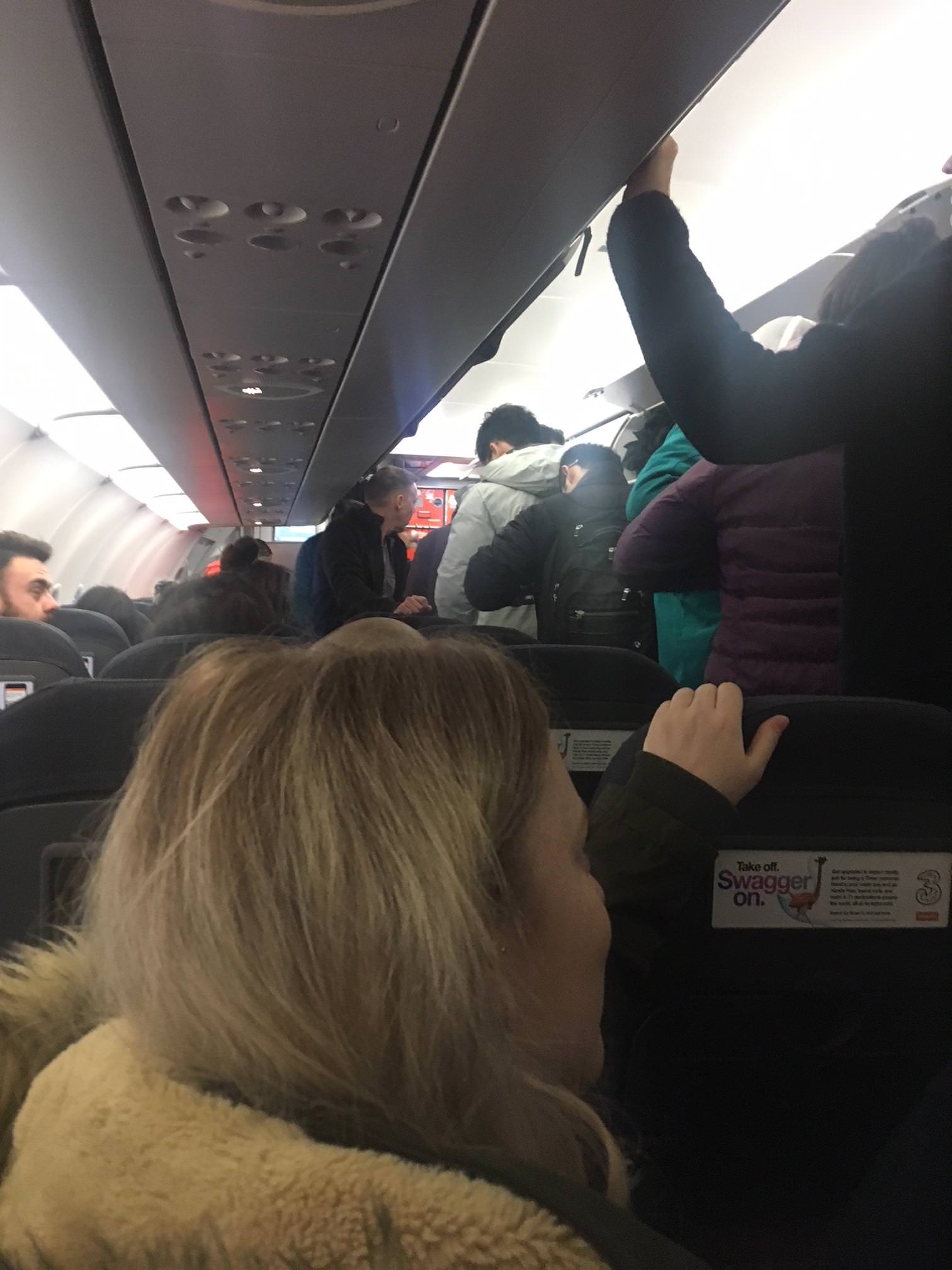 When we got to Reykjavik Ólafur Arnalds was playing an intimate, great as he usually sells out large venues. 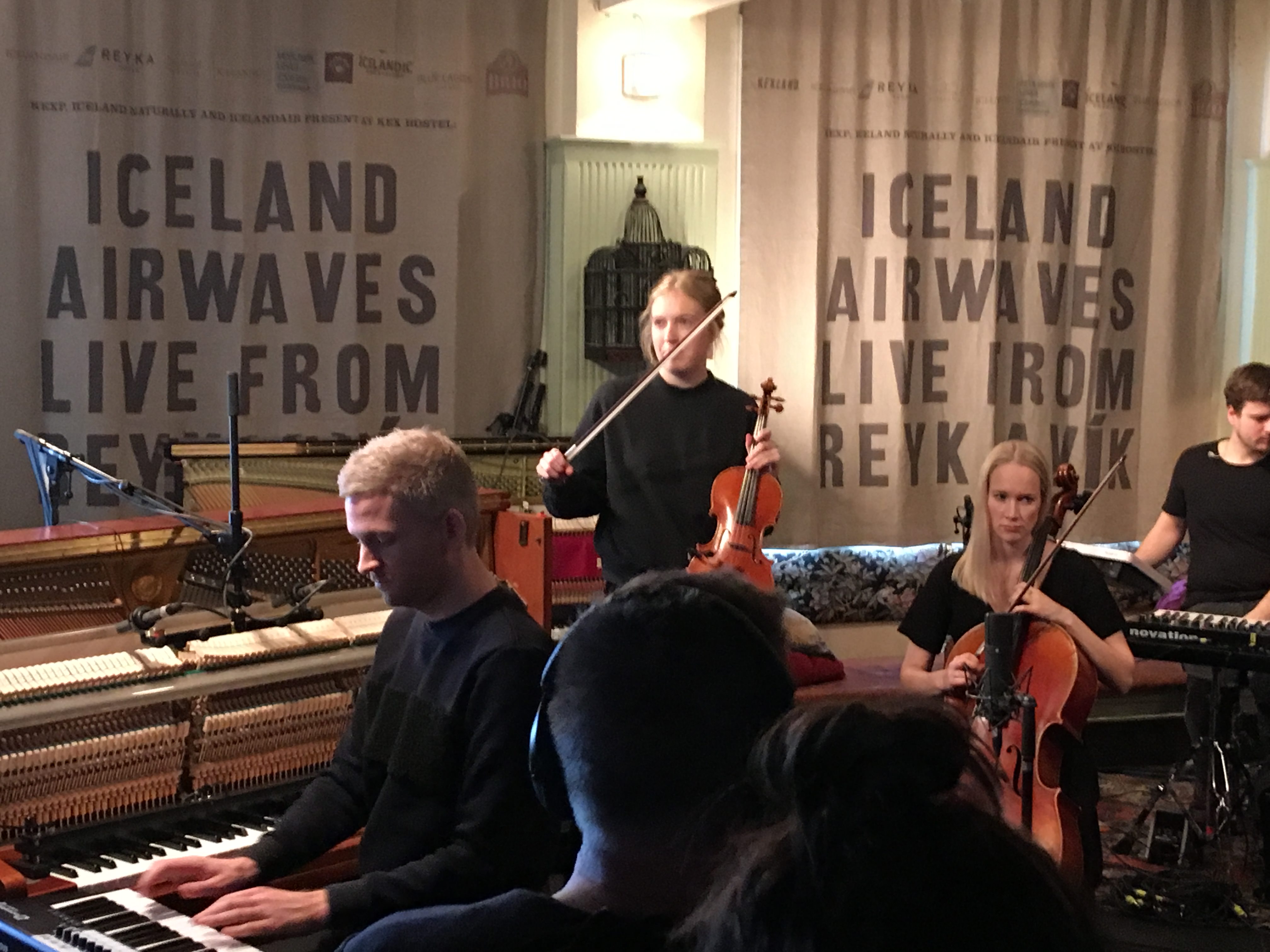 Oddly enough the first person I saw on walking in was the photographer whose event had inspired the trip. Iceland is a small place.

And finally…… what trip to Iceland would be complete without a cameo by Björk wearing an unusual dress? 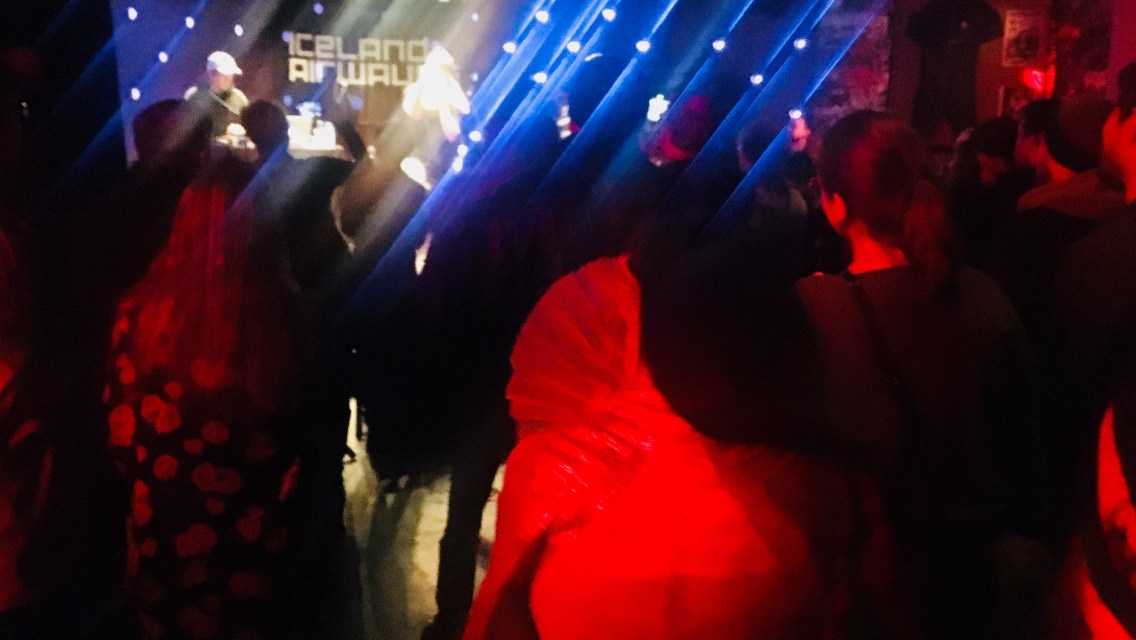 So here you go, blending in inconspicuously by wearing a paper fan over her face dancing away in the crowd at Hard Rock Reykjavik.

by Ryanair01
Keflavik to Gatwick - the return
After a few days in Reykavik it was time to head back. Iceland Airwaves Music Festival was on, which became of the trip’s focuses.

Airwaves was an Icelandair initiative to generate a bit of business off season and 2018 was the 20th anniversary. I tried to catch as many local up and coming acts as possible because the international artists will probably pass through London at some time.

I put together this short rough cut with little snippets from a variety of young Icelandic acts, plus a few Australian ones. Please feel free to show your support and watch or listen whilst reading the report, hopefully it will add a touch of colour about my trip.

Although Iceland has some truly stunning natural beauty, many of the residential areas are pretty bleak looking. I can see how it has driven a surprisingly urban music scene. 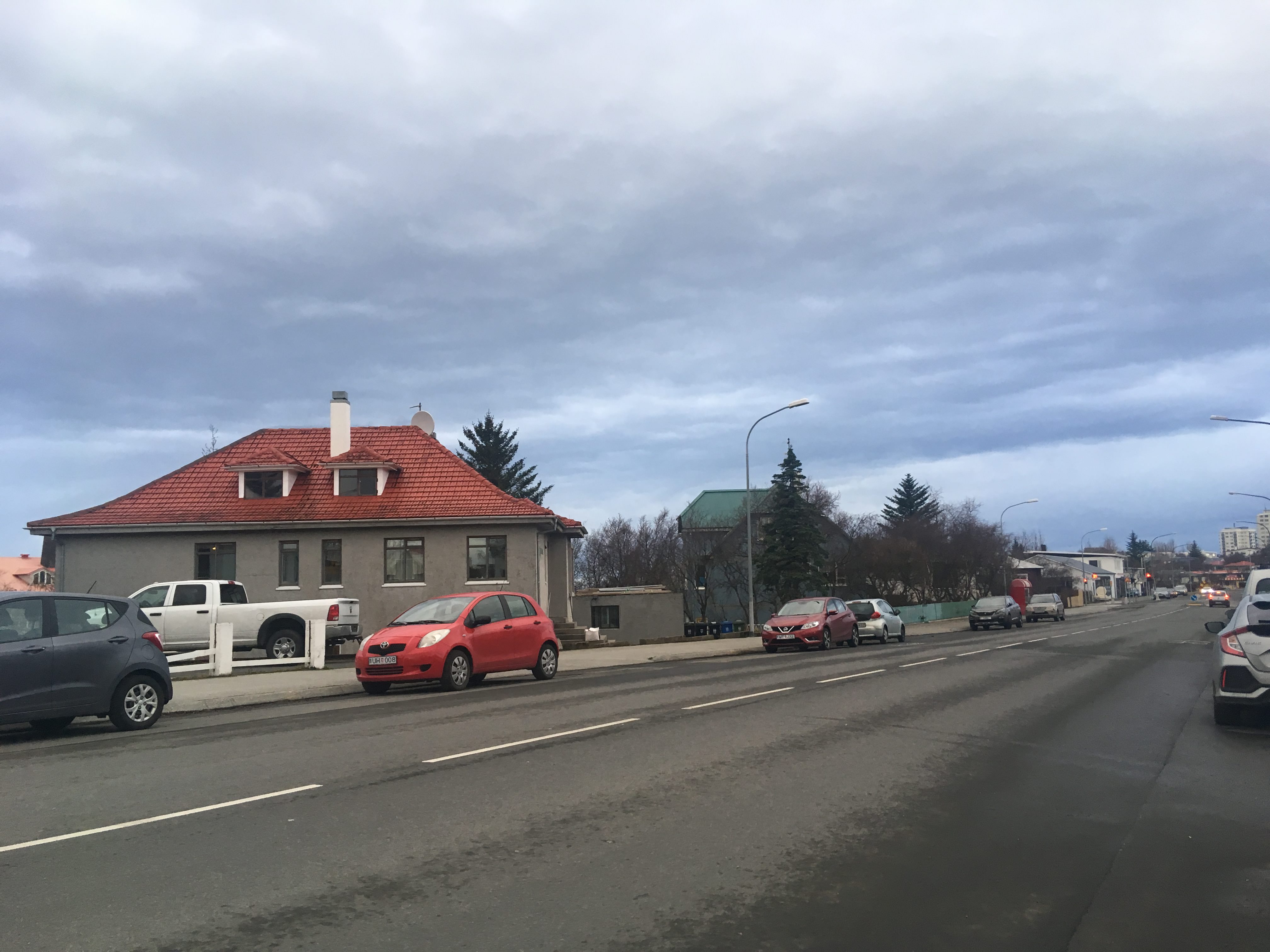 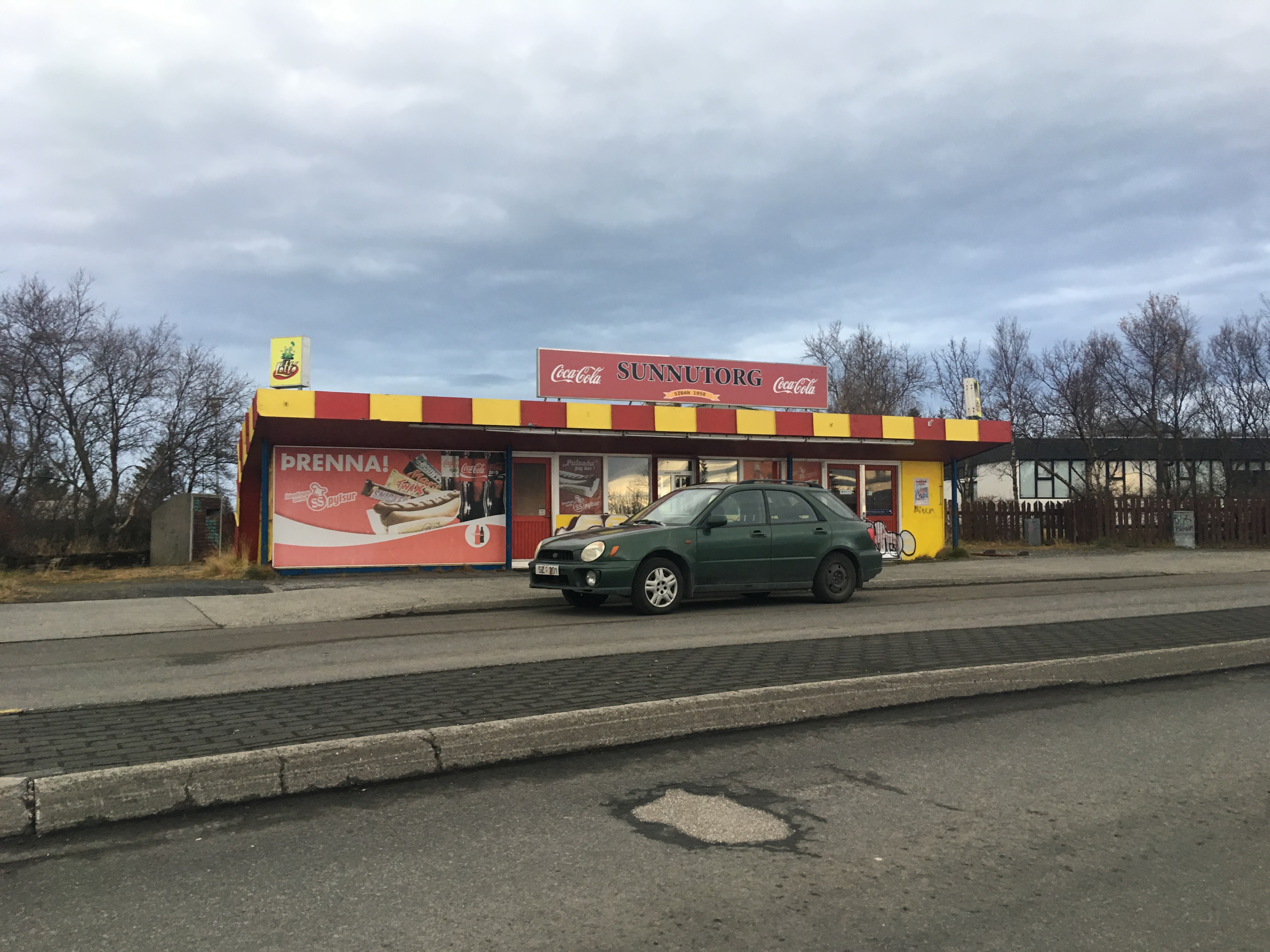 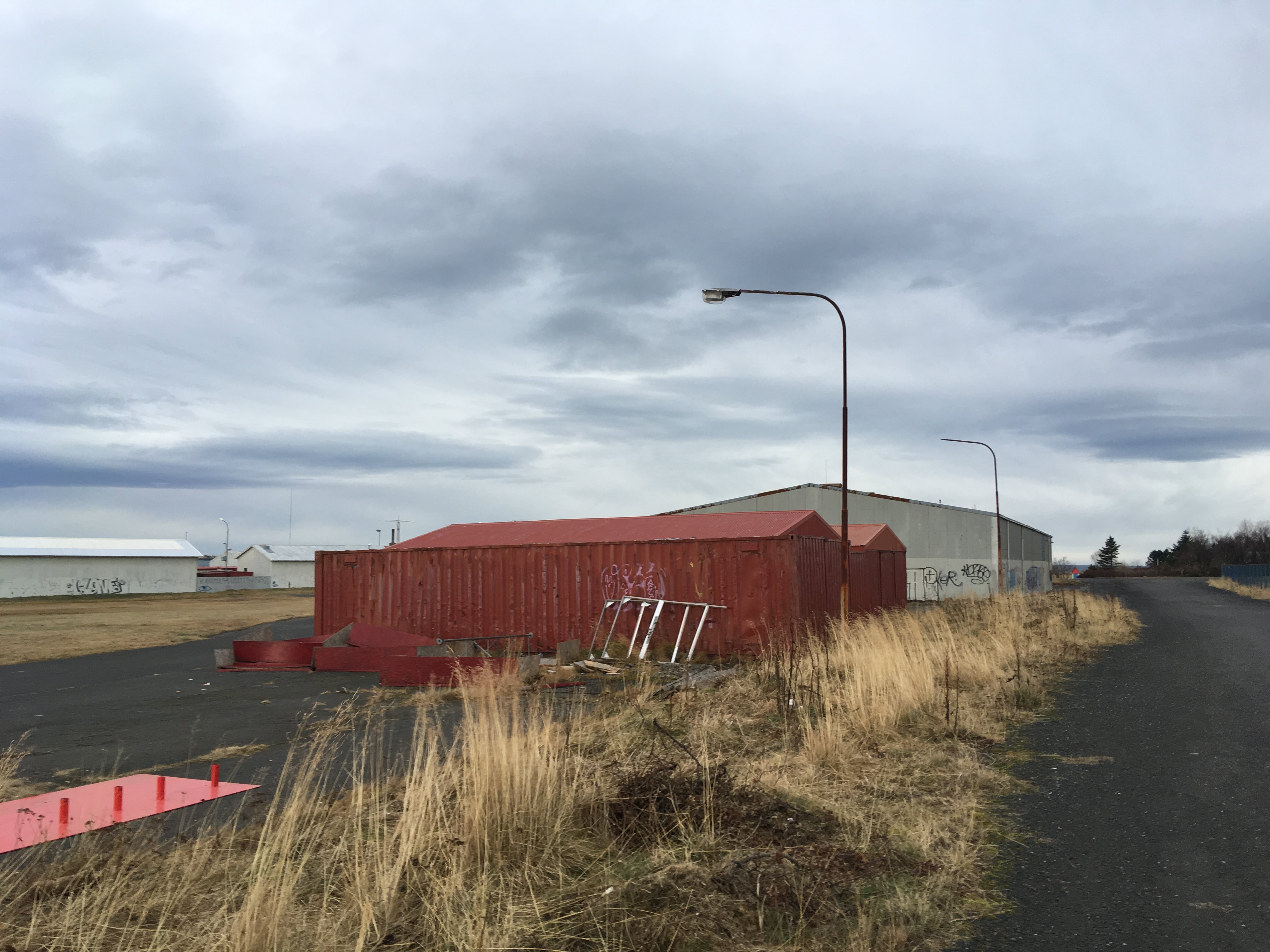 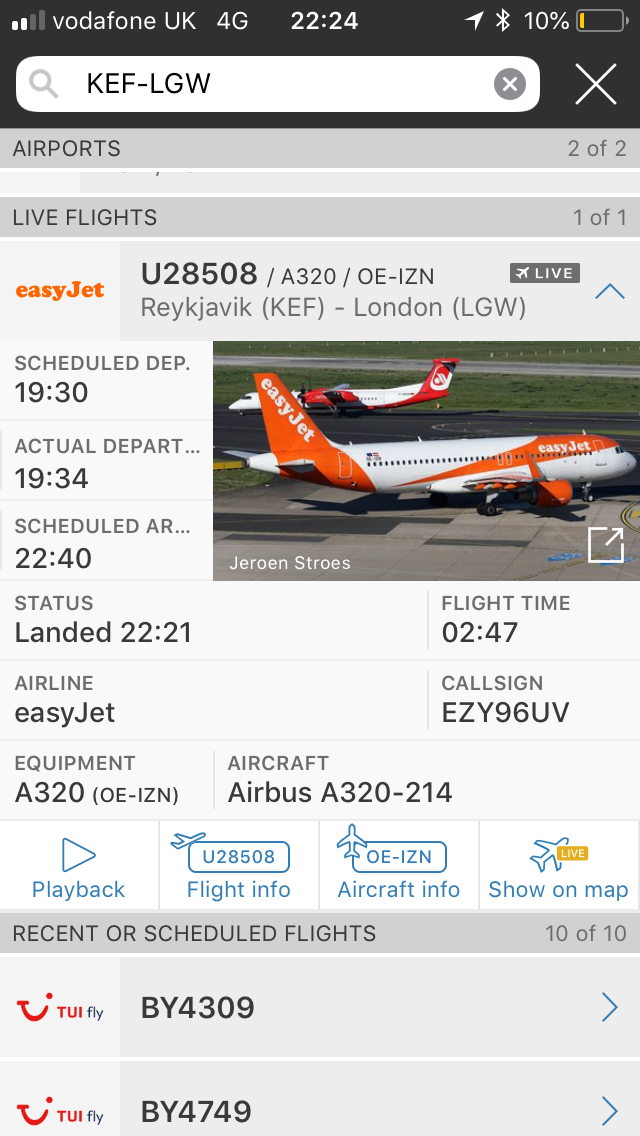 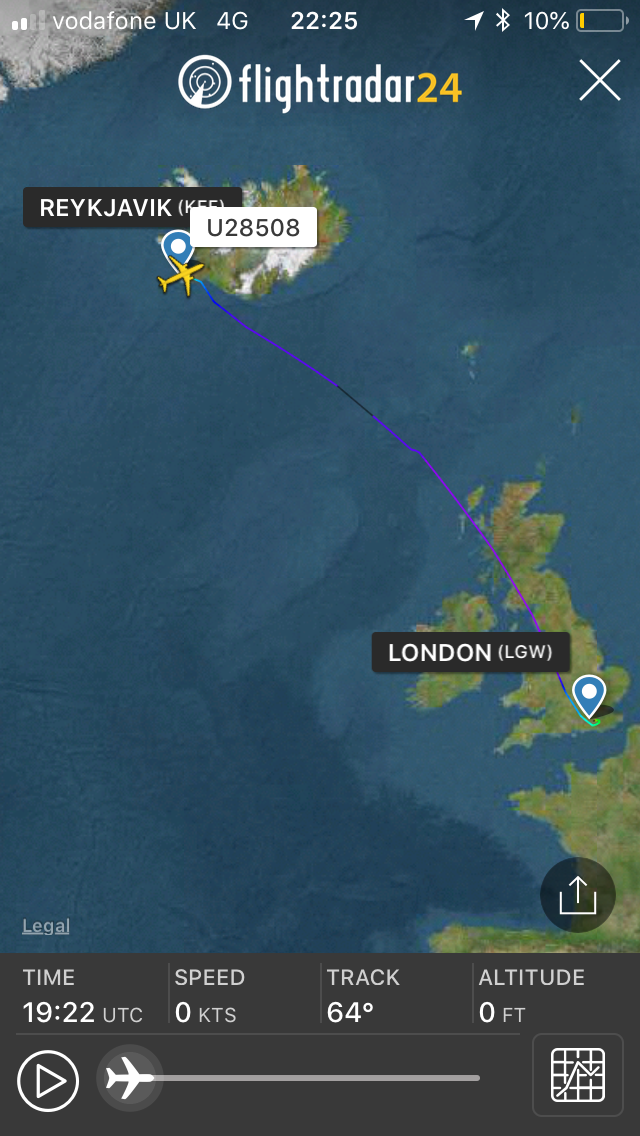 We arrived at Keflavik just after the evening rush. Pottering around the town beforehand it was quite impressive to see a constant stream of aircraft leaving. 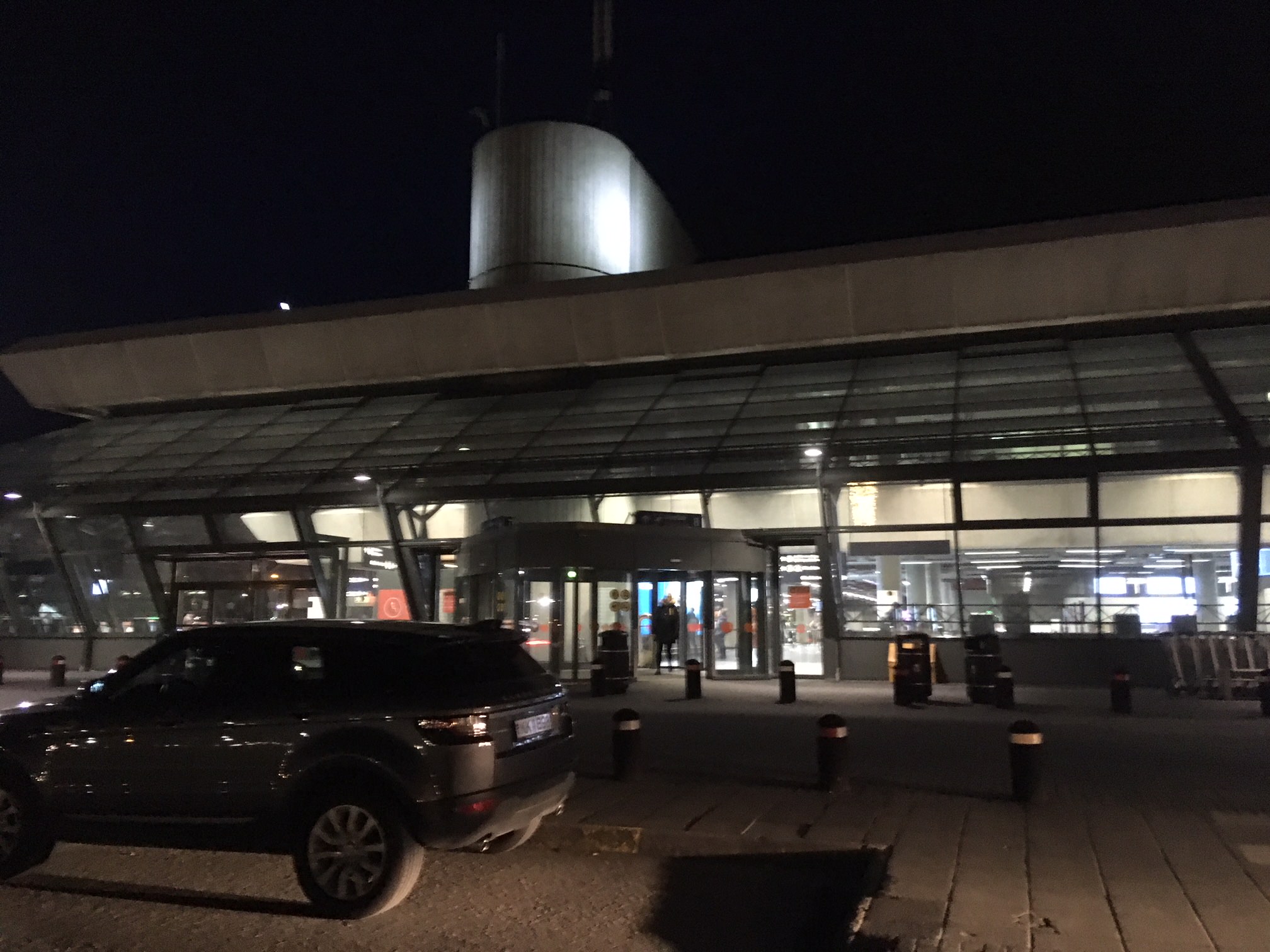 The checkin area was almost empty, apart from a few passengers queueing for Wizz. With an increasing number of Poles in Iceland, Wizz seem to have created a niche shuttling visiting family back and forth. 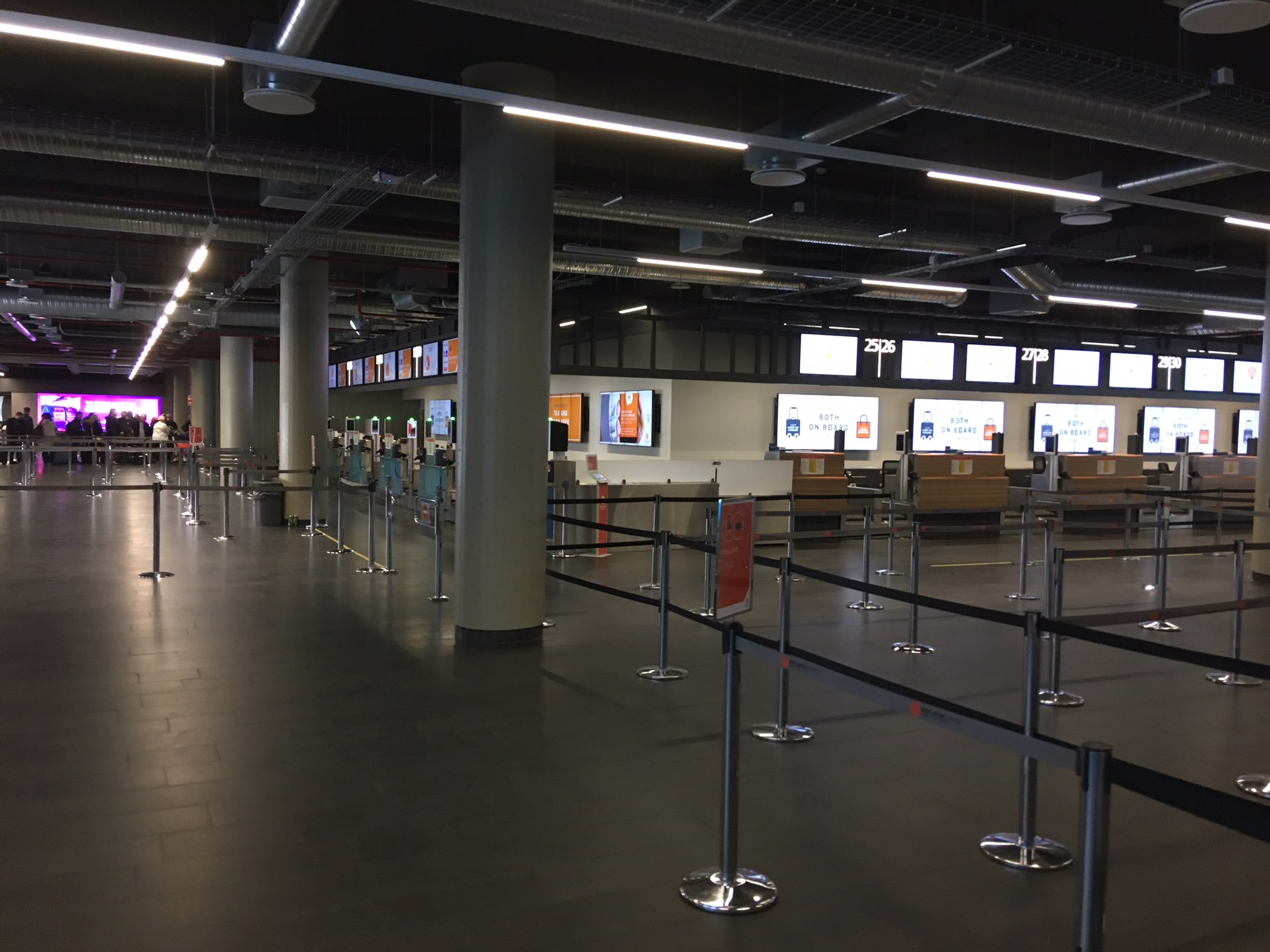 Security was a breaze, with no queues at all. The entire departure area was almost deserted, creating a very peaceful feel. 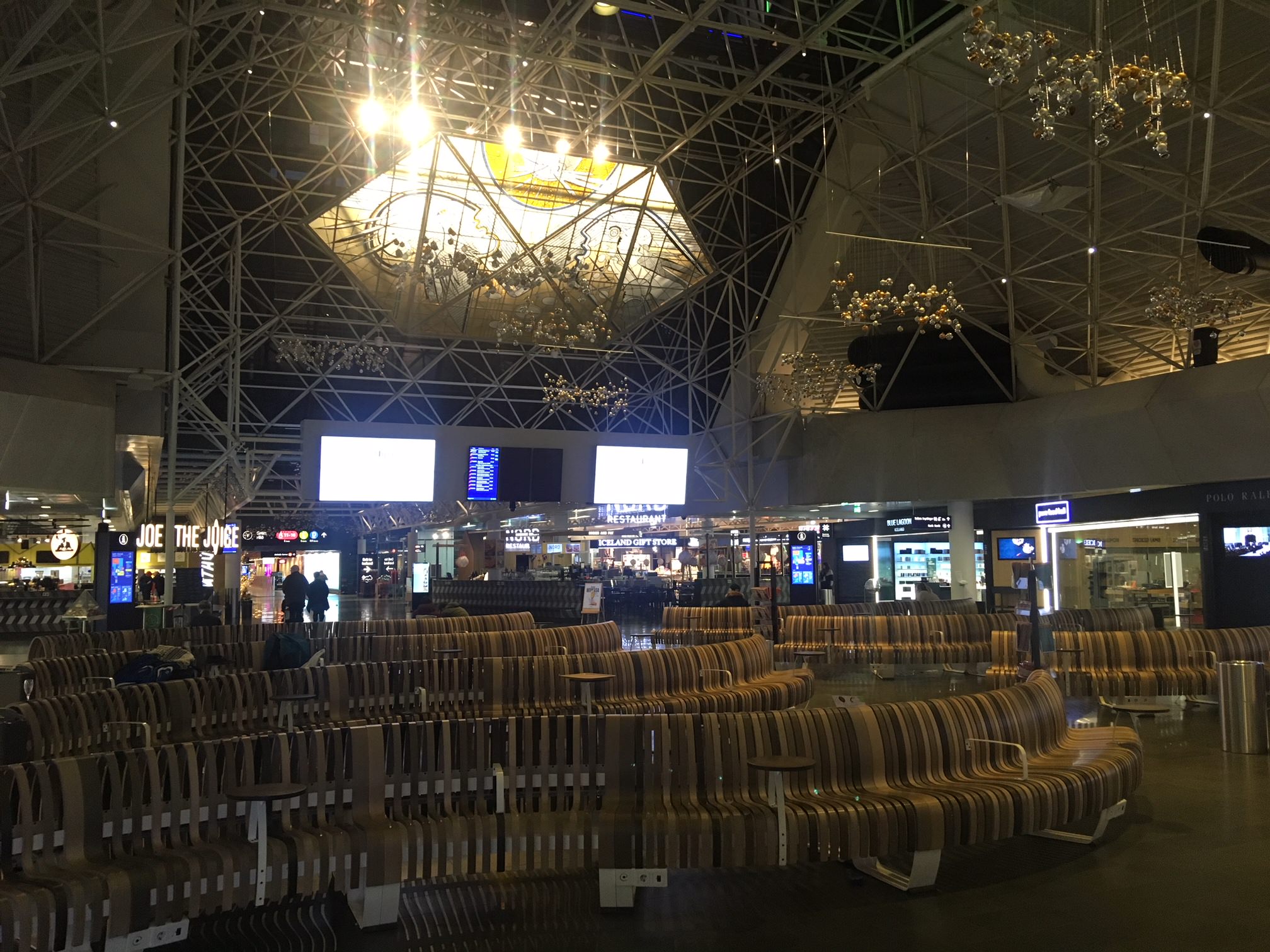 That got shattered when my friend discovered he’d left extremely expensive Bose headsets in our hire car. Thankfully the airport staff were extremely helpful and let him back into Iceland, which meant he was able to recover them. Icelandic pragmatism at its best, I can’t imagine UK airports would be so helpful.

I meanwhile minded the luggage and got some dinner, a rather sorry looking £8 burger. 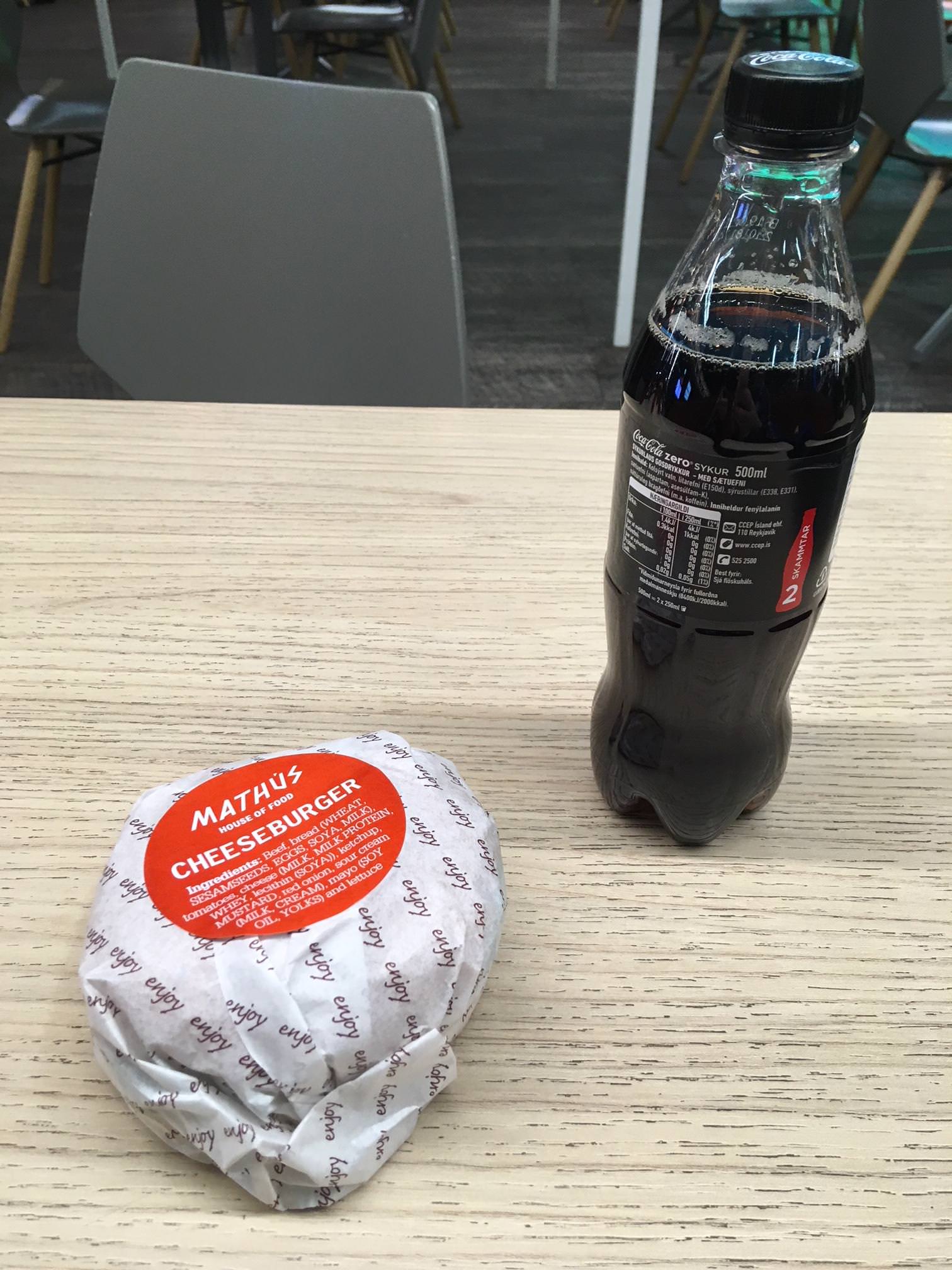 The flight was boarding soon after 7pm, which of course just meant queue after queue. For some reason my boarding pass was rejected, in the end gate staff just ignored it and let me on. 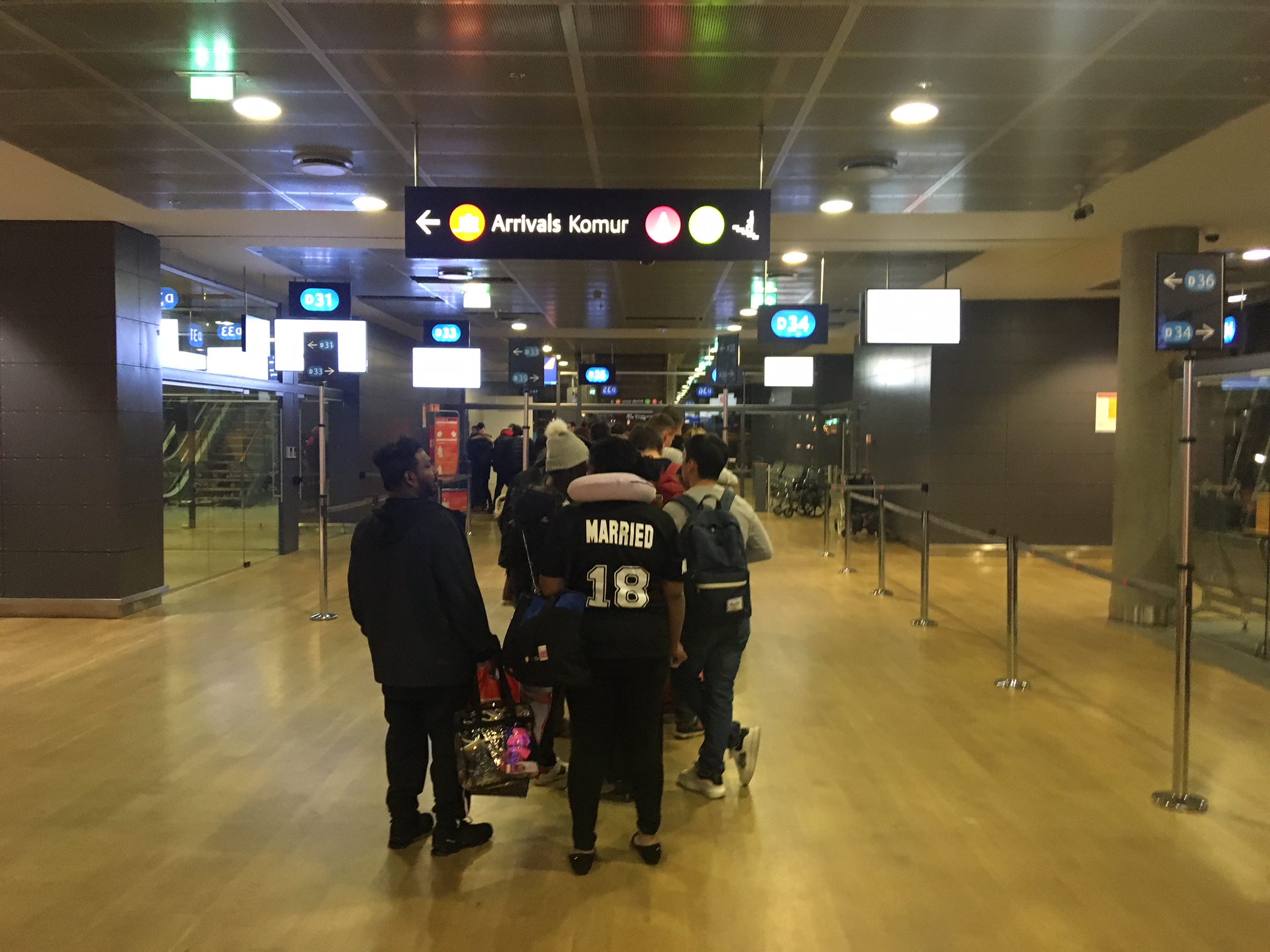 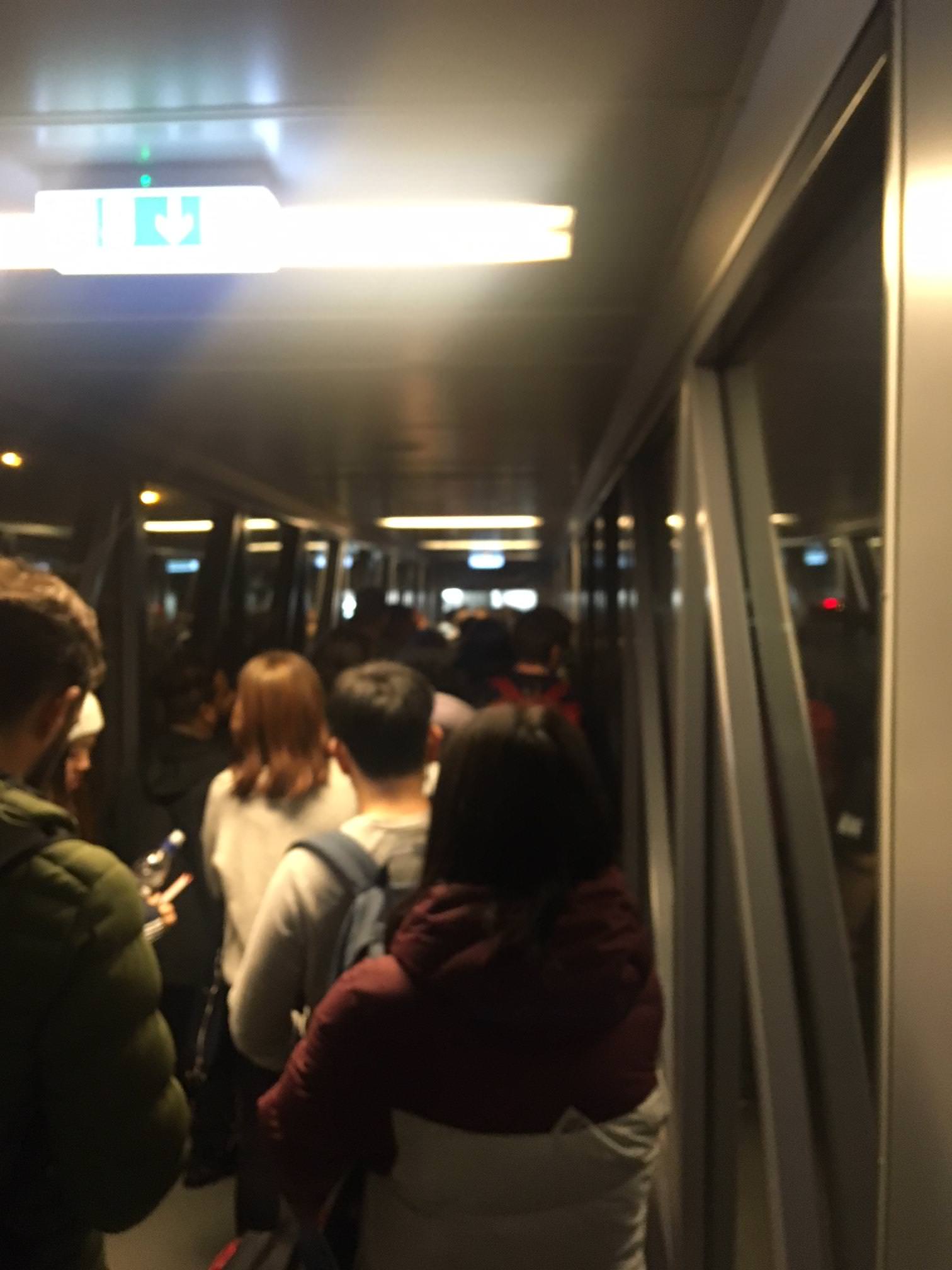 It took about 15 minutes to reach the aircraft door, which seemed a very long time. No way could the scheduled turn around have been made without an early arrival.

OE-IZN awaited. This is an A320 which started life in 2016 with Air Berlin and ended up with Easyjet after they shut down. It has an Air Berlin interior, which is basically the same as Lufthansa, right down to the grey leather seats of the same model. I actually prefer it to Easyjet standard which I’d flown a couple of days before hand, in particular it had more knee room. 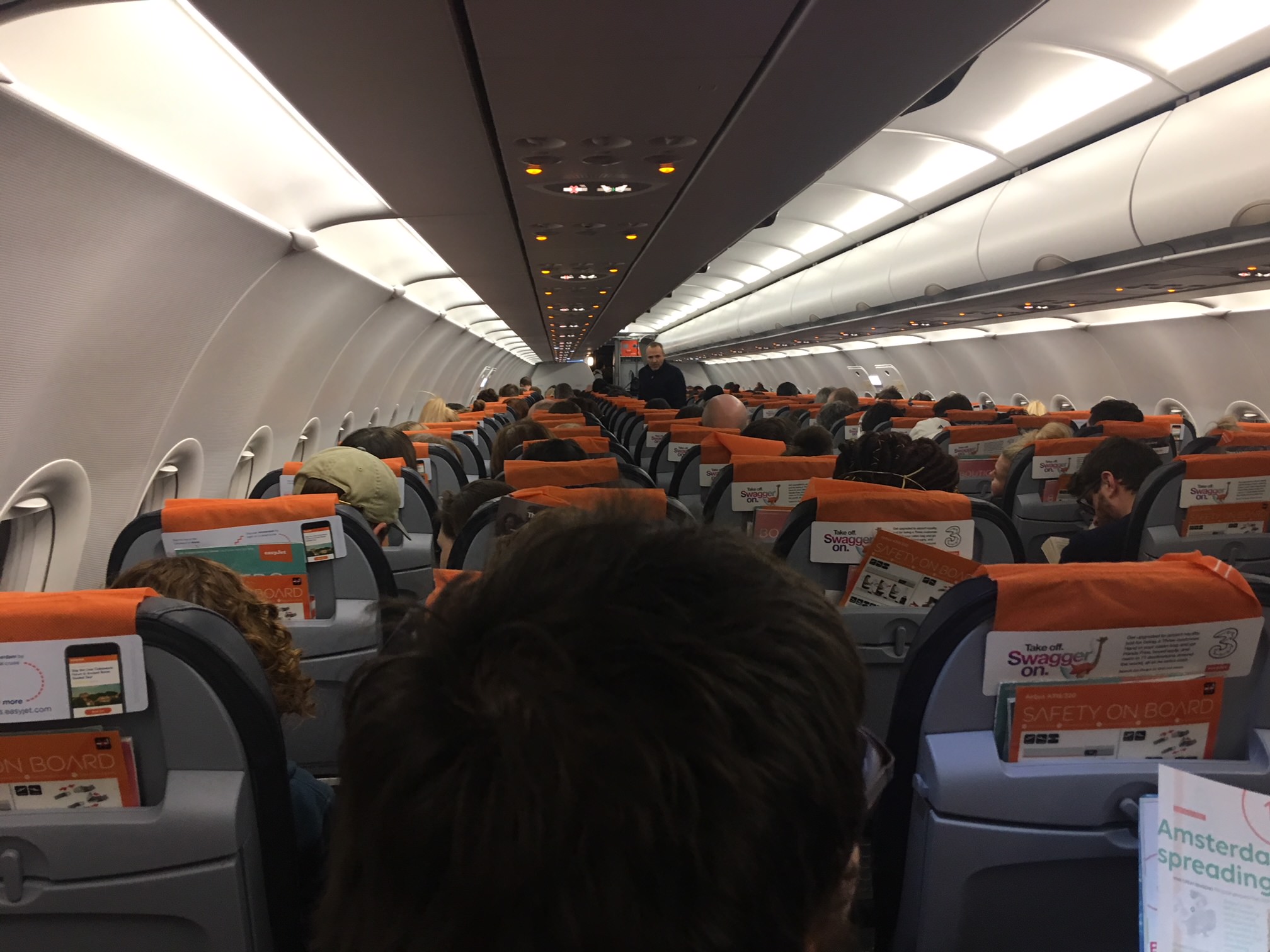 The downside is the antimacassars don’t fit and ended up everywhere. This made the cabin seem a little messy.

Our captain made a thorough announcement, explaining we’d enter the UK around Stornaway and overfly Blackpool. After take off he announced the Northern Lights were visible, so the cabin crew kept the lights darkened and delayed service until people had taken photographs. This took a good twenty minutes as passengers scrambled to catch them. Contrary to popular belief, Iceland isn’t the greatest spot to catch them, so those on board were quite excited. 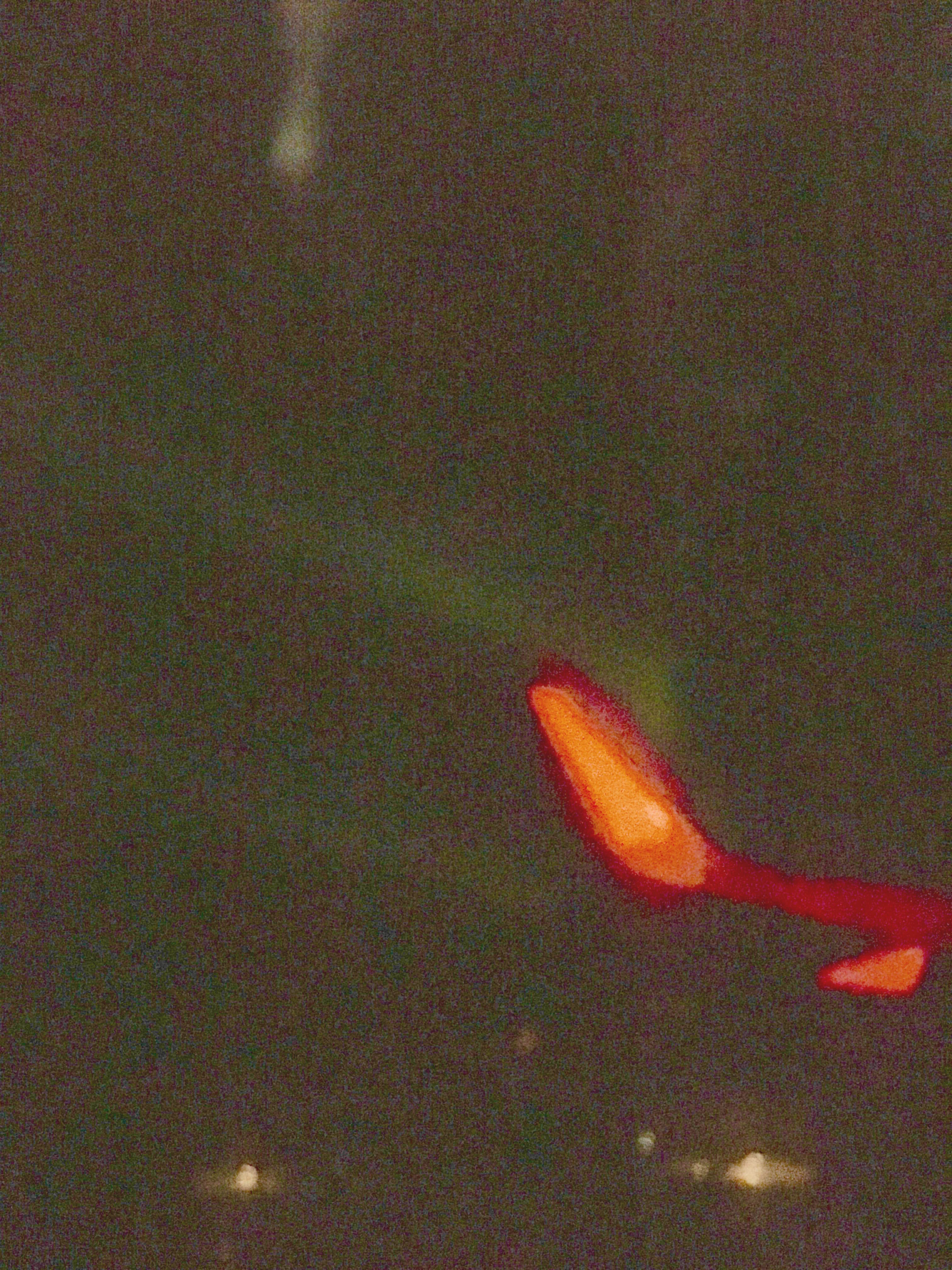 My camera is very poor in dark light, but this just about gives you an idea.

Service commenced around 45 minutes after take off once the cabin had settled down. I ordered a Cadbury’s Hot Chocolate, which came in a large cup. The stewardess was very pleasant and nice when I needed to change credit cards. 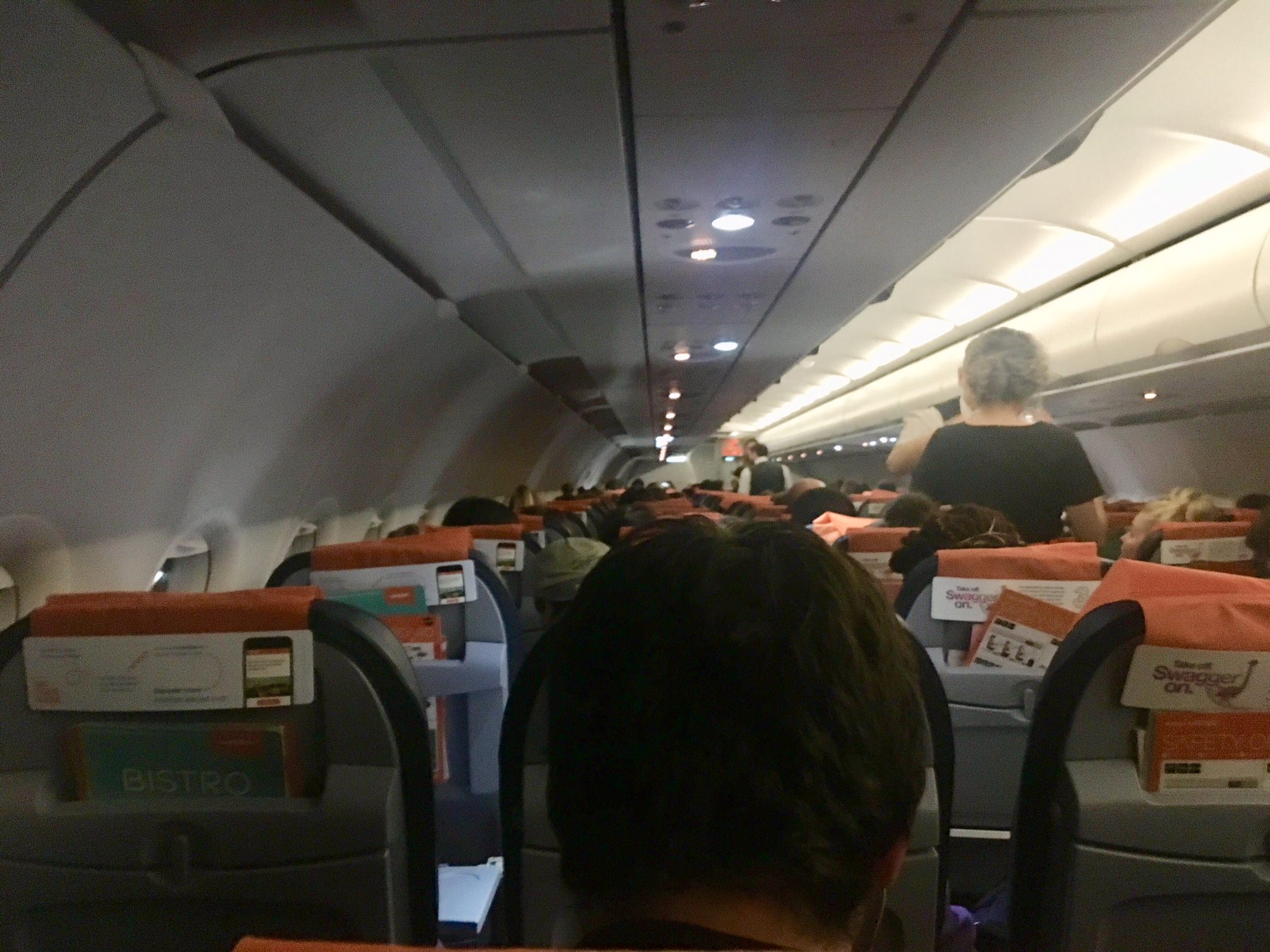 I then dozed listening to some podcasts, sipping my hot chocolate. The cabin was very warm and the leather made this a little sticky.

About an hour out of Gatwick the crew came around with duty free, cigarets were doing a roaring trade. They then came around again to collect for Breast and Prostate Cancer. There was no second round from the trolley on this flight, not surprising as the first was delayed.

Over Blackpool the captain told us landing at Gatwick would be rough due to thunder storms but that we’d be early. The crew started to prepare the cabin quite early, wise as once we reached the south of England there were some pretty rough air pockets.

Touch down was a tad rough and the aircraft fish tailed a little down the wet runway. Thankfully we pulled up to main North Terminal building. I say that, as although the bridge provides amazing views of the field, unfortunately rail engineering works were starting in 40 minutes, so we needed to race through the terminal.

Exit was via stairs into the heavy rain, thankfully I had my waterproof cost with a hood on. Others were not as lucky.

Rushing through we managed to jump on the second from last train, with me elbowing the doors back open.

Leaving aside the easyjet staff at Luton’s Ibis Budget, overall it was a very professional experience. At just £46 return, new aircraft, operated on time by professional crew - there is very little bad one can say.

My only comment would be that Easyjet’s new seat does limit your leg room more than before, the German Air Berlin designed cabin was much better in this regard.

by lychemsa
I flew EasyJet from Geneva to Olbia R/T about 10 years ago and liked it. No difference with other airlines and the fare was great.

Ryanair01 wrote:
. Throughout the trip she was sending photos which, well, you wouldn’t want to share on airliners.net

Well, why not let us decide?

Ryanair01 wrote:
. Throughout the trip she was sending photos which, well, you wouldn’t want to share on airliners.net

Well, why not let us decide?

by ewt340
Don't call her a ho. She made your friend really happy that day!

Anyway, What's Iceland without Bjork? It's like the UK without easyjet.

ewt340 wrote:
Don't call her a ho. She made your friend really happy that day!

I wasn't referring to the staff member

ewt340 wrote:
Anyway, What's Iceland without Bjork? It's like the UK without easyjet.

Iceland, a collection of repossessed airliners according to anet