Background
My dad grew up in Milwaukee. Because of that, 1-2 times a year we travel out there to be with family and to indulge in some of our favorite treats: frozen custard, and kringle. When I was young we would do this route on YX's B717. Once they were bought out by Republic and merged with F9 we would fly on F9's A319's. A few years after the merger F9 pulled out of this route, and we began to fly on WN on their none stop BOS-MKE. Starting with last year's trip we also began transporting frozen custard back home using a small, 24 hour cooler with ultra cold packs.
As always, feedback is always appreciated.

Booking
After last year's hour delay and 1:40 arrival into BOS, we initially decided to see whether DL offered a better departure time on their nonstop to MKE. They did not. Looking at the WN website, we found that every day they had a different schedule on this route. By playing with the dates, we were able to avoid any 5:00 departures or midnight arrivals. Ultimately we settled on departing BOS on 12/26 on WN 5355 and returning 12/29 on WN 3111- a very short trip but there is not a lot to do in MKE in the winter. WN 3111 would also give me an opportunity to review the WN B738.

Online Check in
Southwest does not assign seats. Instead, they assign a boarding position when you check in (you can also spend $15 per person for them to automatically check you in and assign you a boarding position). Historically I have been able to do online check in at exactly 24 hours before departure and gotten mid to late A group. Due to slow wifi at my employer's base, I ended up checking us in 2 minutes later, and got positions B20-22.

At the Airport
Approximately 2 hours before our flight departed the Preflight parking shuttle dropped us off at the BOS A terminal. Once inside we made our way to the Southwest airlines check in and quickly self tagged our bags and checked them in to BOS. We then made our way to security. The TSA precheck line was short but very slow moving because numerous people seemed with struggle with getting through the metal detector (everone ahead of us seemed to forget to take off their bracelets and suspenders). Once through we made our way to gate A19 in the A concourse. I then went for a little walk and did some planespotting. 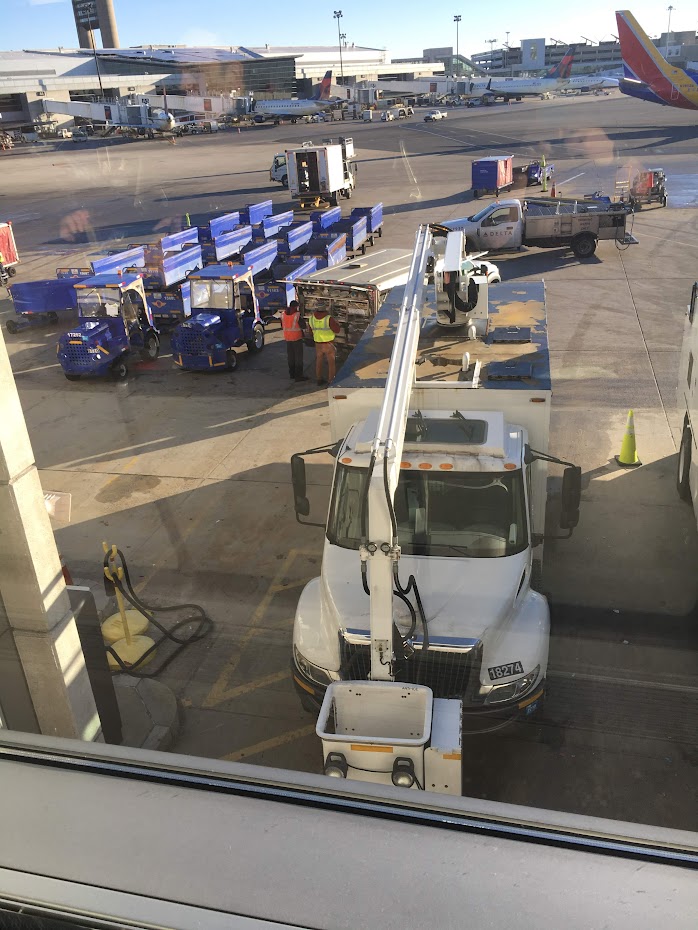 Lunch cart with assorted DL aircraft in the background. 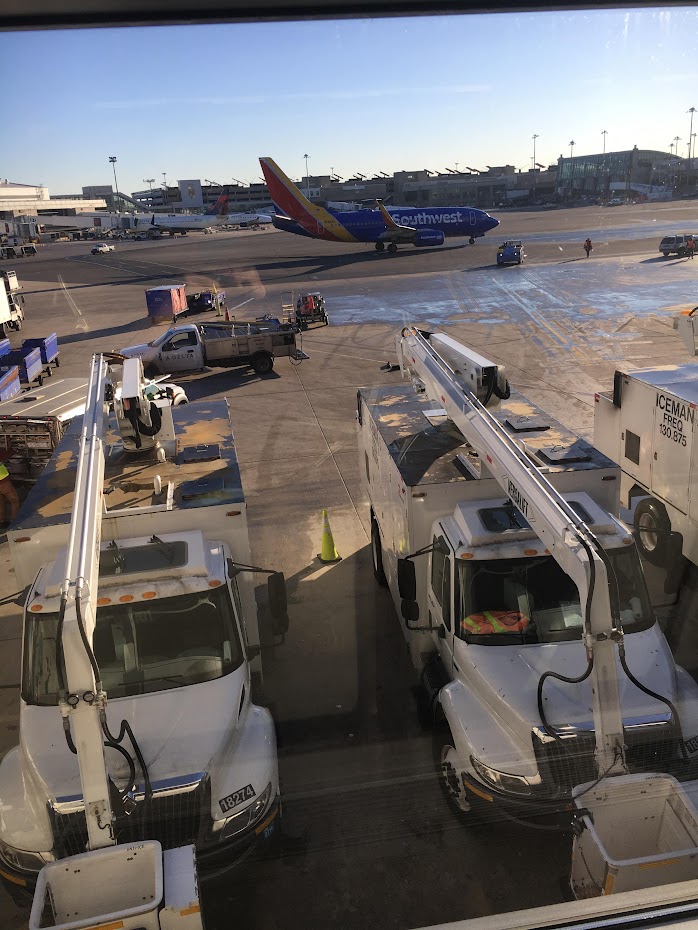 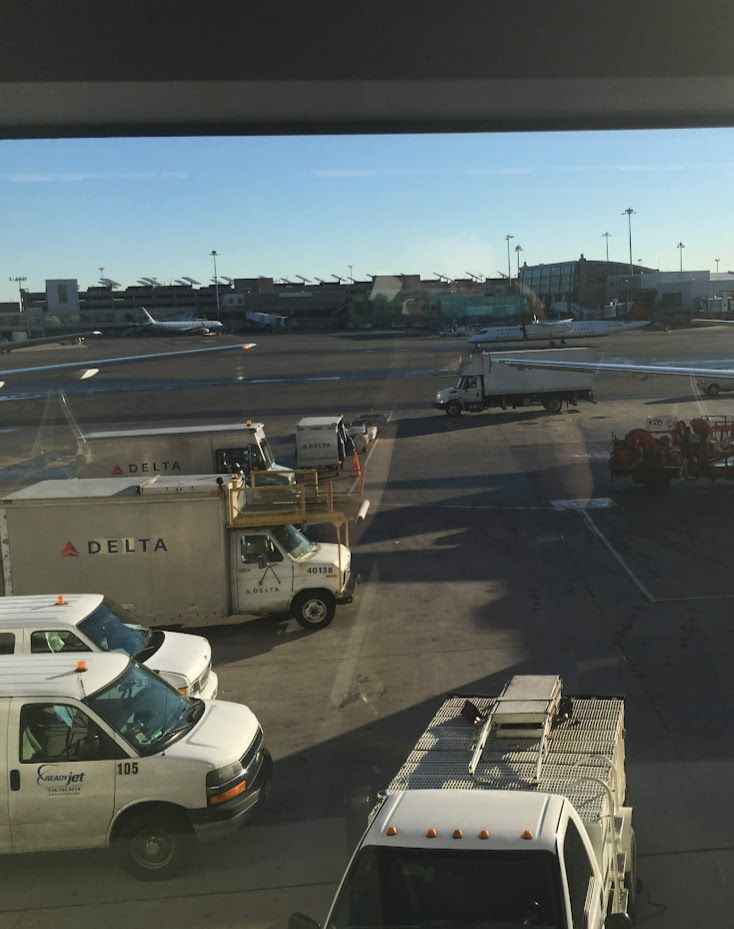 AC DH8 in the new livery 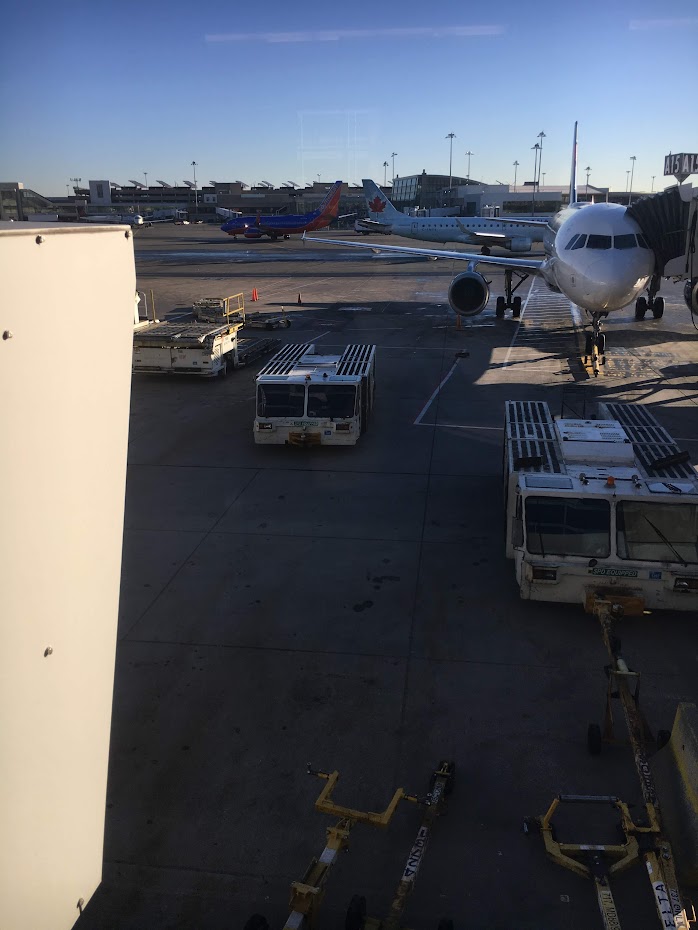 At 9:28 boarding was called. Once A1-30 was onboard we lined up in our boarding positions. After a lot of people boarded during the family preboard in between groups A and B, we were finally called to board the plane.

Onboard
Once onboard, we found a very full flight with the only empty rows of 3 being at the back of the plane. We settled into one of these rows on the DEF side of the plane. Due to how crowded the plane was I could not get a good image of the classic Evolve seats, so I have attached one from a previous flight on this aircraft. As always, this seat was well padded for this 2.5 hour flight, but I am not sure how comfortable it would have been for a longer flight. The seat also had a good amount of leg room, sufficient for me to have a fair amount of space between my legs and the seat in front of me. 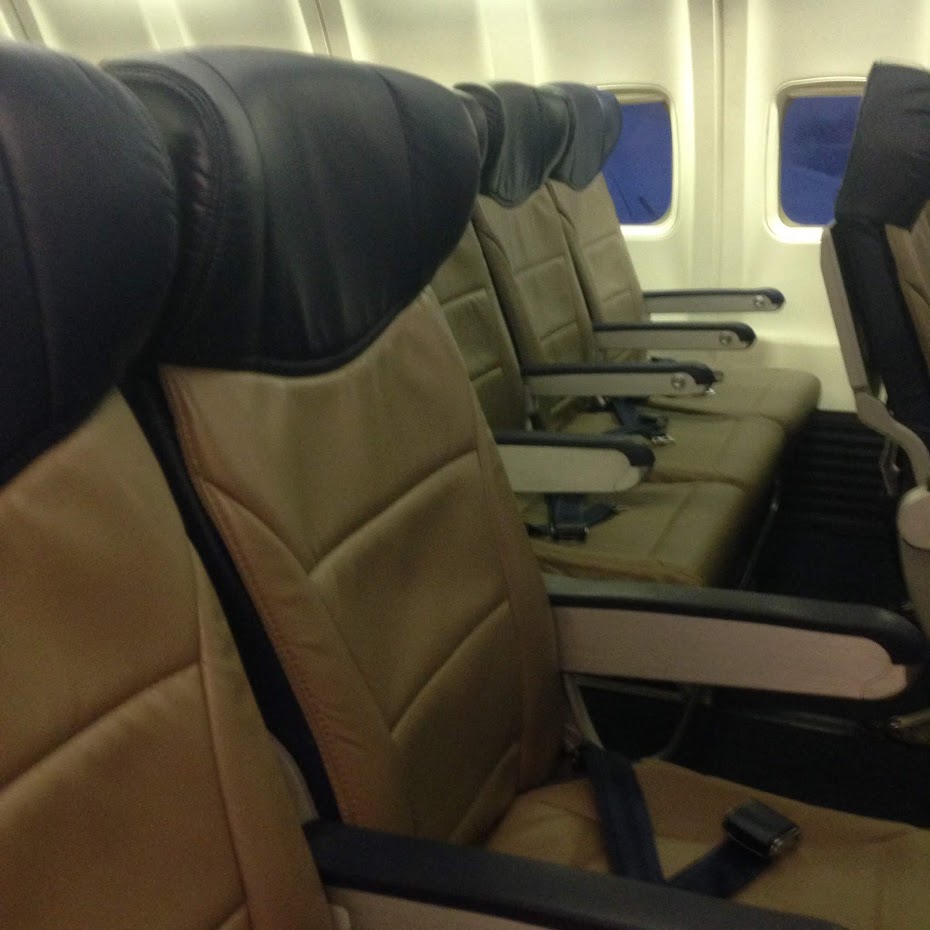 At 9:51 the doors were closed and the captain made a brief announcement. At 9:54, 6 minutes early, we began to push back and the flight attendants started their manual safety demonstration as I planespotted. During the pushback we also had one of the smokiest engine starts that I have ever seen. 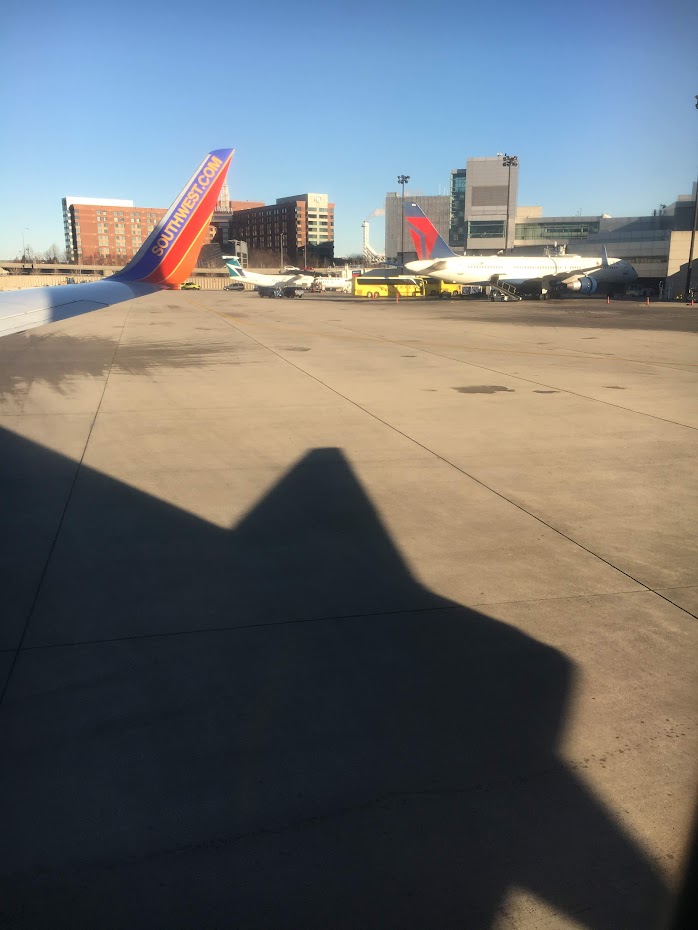 DL special charter with WS DH8D in the background 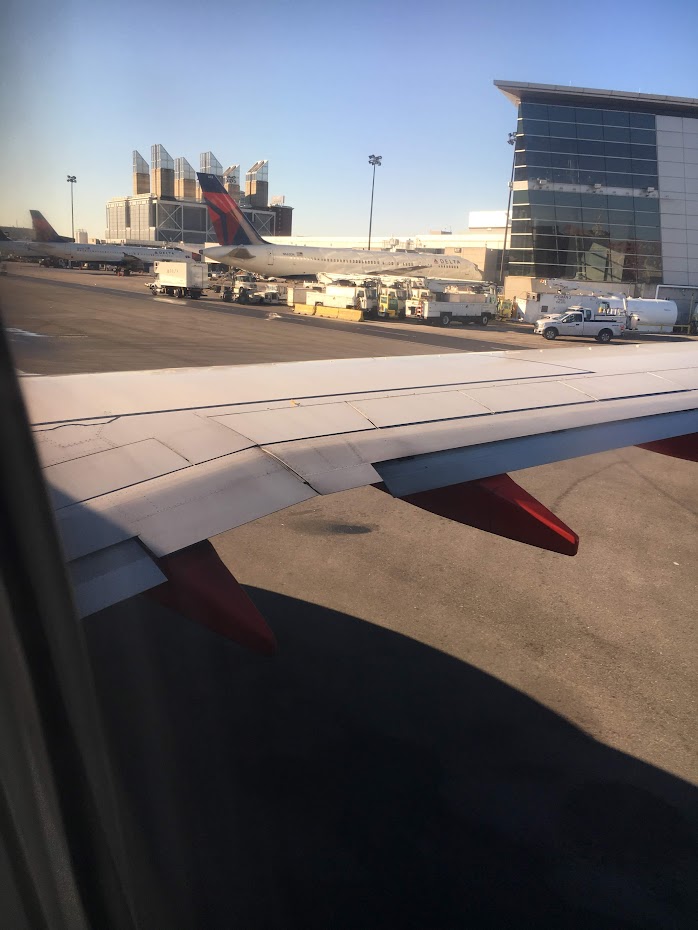 At 10:10 we began our smooth takeoff roll down runway 27, yielding a beautiful view of the city of Boston. 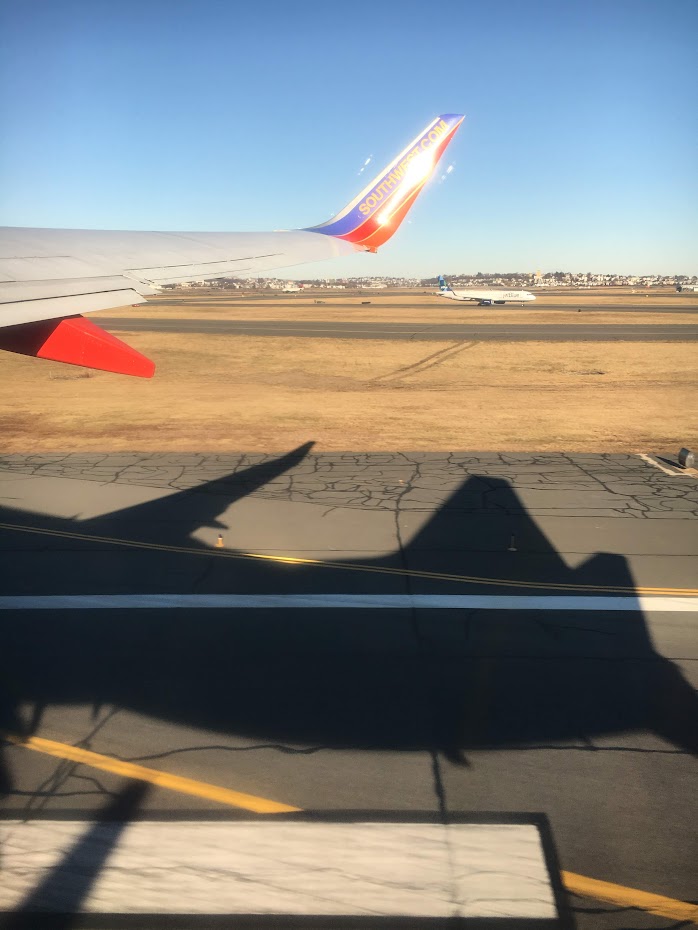 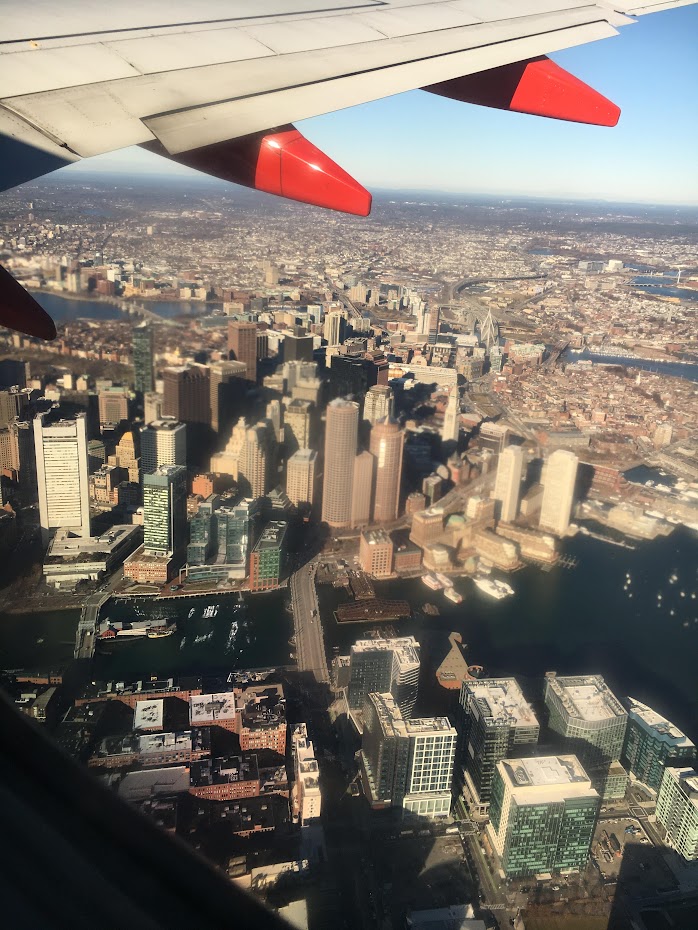 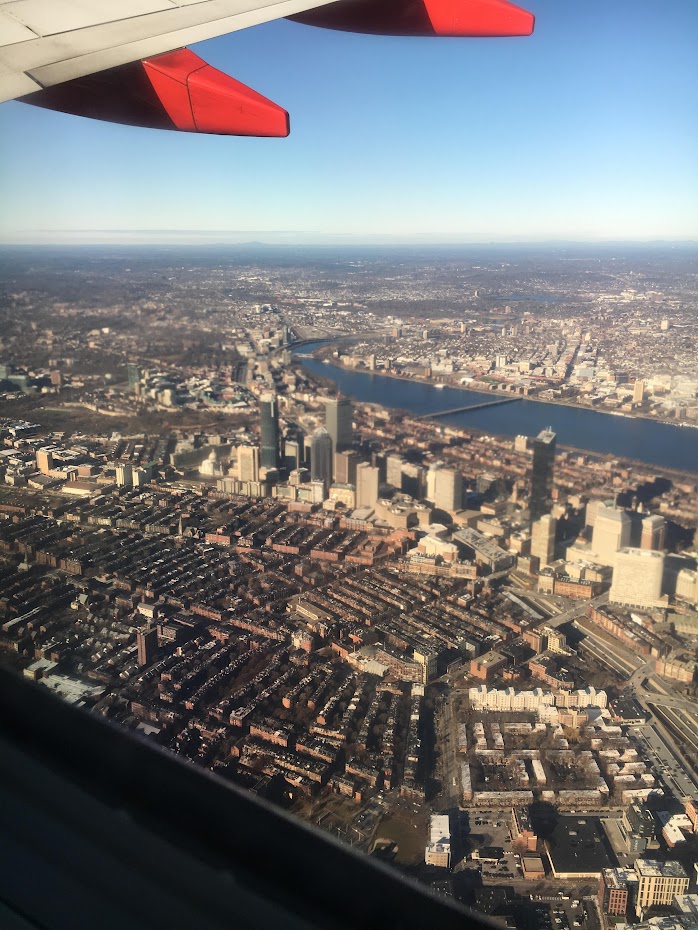 We then turned north, and moved parallel to the Atlantic Ocean. Near Danvers we then turned due West, meaning we would be taking the northern route to MKE.

Once over 10,000 feet I explored the options that WN had available via their streaming entertainment system. Besides the 15 channels of free satellite TV, they also had free music streaming, about 20-30 free tv shows, and a handful of movies. In usual fashion, their was nothing good on tv, so I selected an episode of Chopped. About 20 minutes after takeoff, the flight attendants began coming through the cabin taking drink orders. 10 minutes later they came through handing out packages of tasty plane shaped crackers. 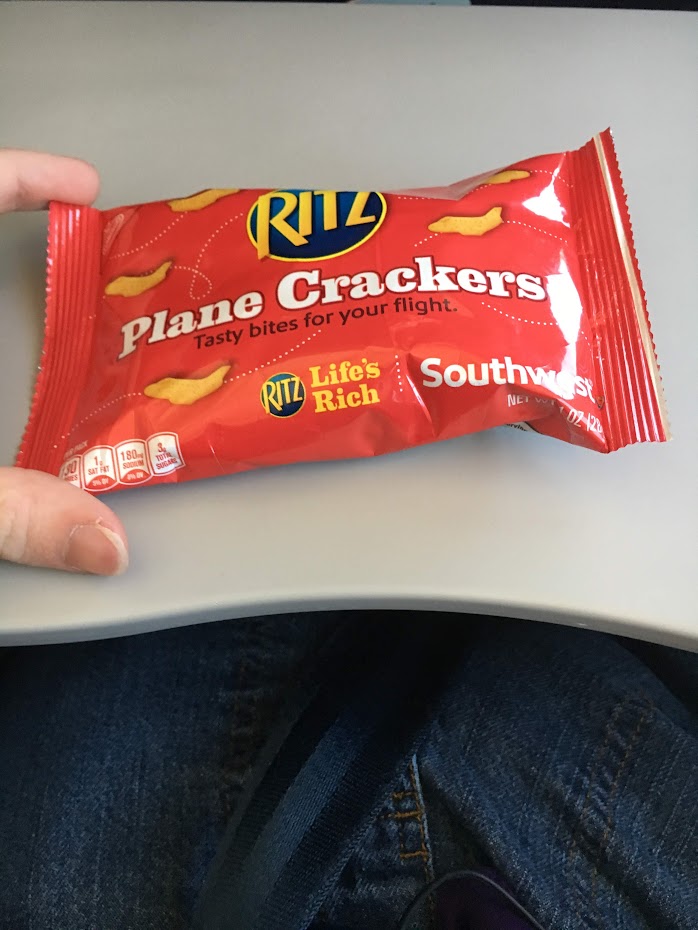 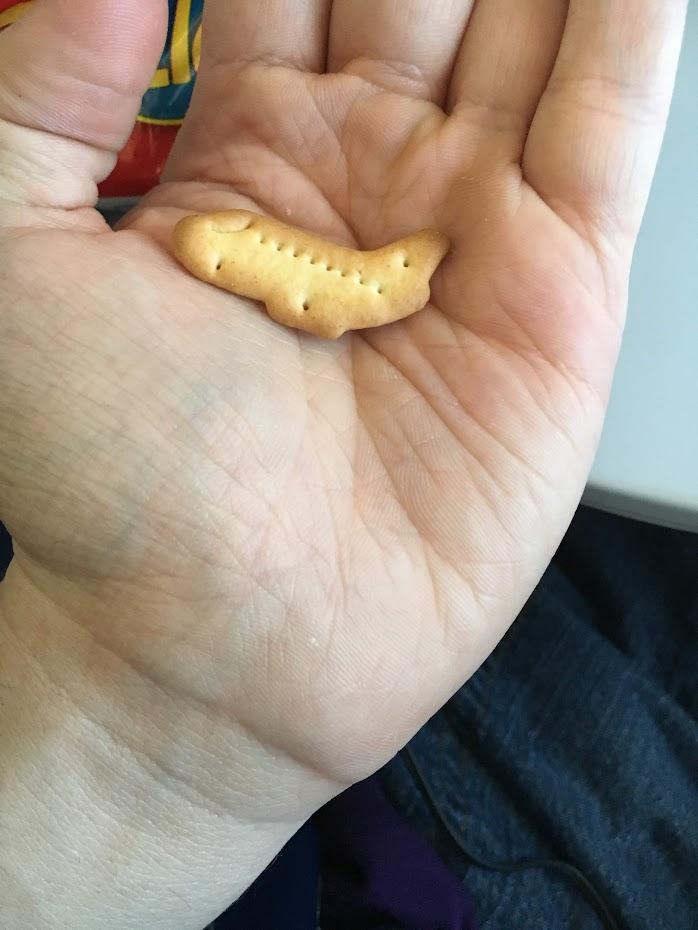 One of the planes

During this time we reached our cruising altittude of 40,000 feet and our cruising speed of 444MPH (my favorite number). During this time, my beverage (water with no ice) also came. The flight attendant gave me the full can of water. Near the NY-Ontario border my Chopped episode finished and I switched to reading my book. I also spotted this cool looking rainbow. 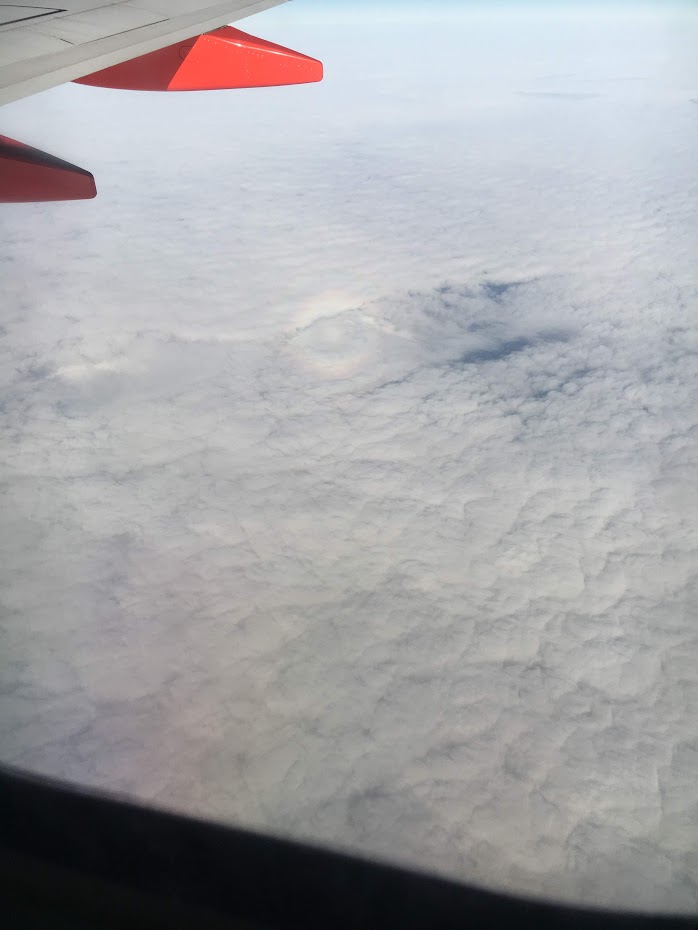 Guess I won't be finding the pot of gold. 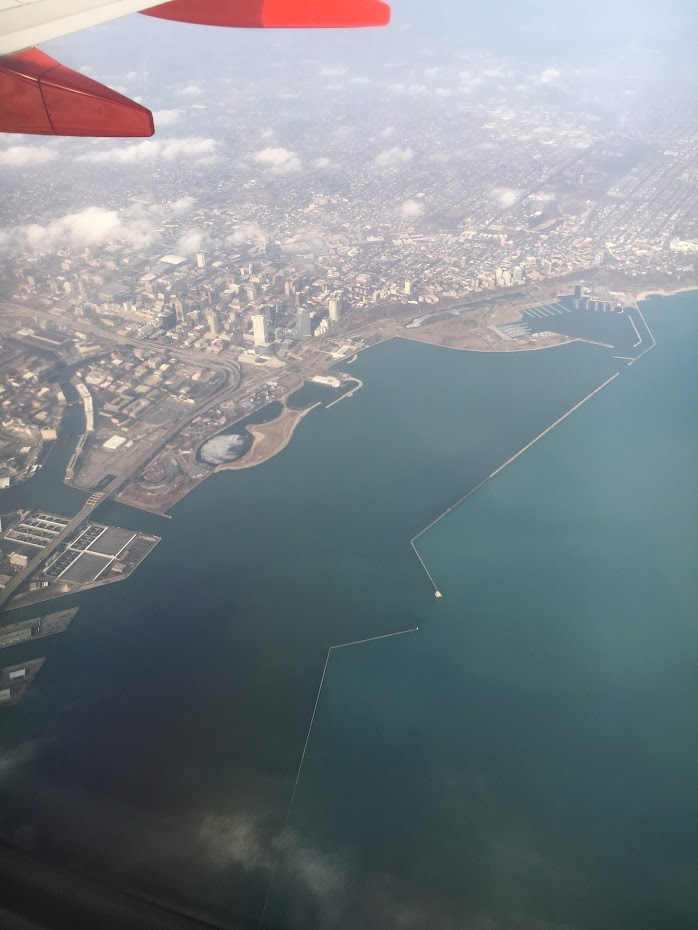 Around 11:28, we made a soft landing on the right landing gear. Seconds later, the left landing gear came down slightly harder, providing one of the smoothest landings that I have had on WN.

After a short taxi, we pulled into gate C23 at 11:34, 21 minutes early. During disembarkation, a few people remained onboard to continue on to BWI- one of the weirder routings that I have seen. By the time we reached the reached the baggage carousel, bags were already coming off the carousel. After a few minutes we had our bags and were on our way to the rental car facility to head for our first portion of Kopp's.

At the Airport
After completing last minute runs to Kopp's custard to pick up a final pint to transport back home we dropped off our rental car and entered the airport. Once at the kiosks, we quickly tagged our bags and printed our boarding passes for the flight to BOS. After a quick bathroom break, we proceeded to the empty TSA precheck line and cleared security. After waiting for my mother to have her bag examined (they opened it but did not find anything) we went to gate C23. After plugging in my kindle to charge, I went off to do some planespotting. While there wasn't a lot going on, I did see a few intersting aircraft. I also noticed that all the WN flights during this timeframe were their larger B738's. 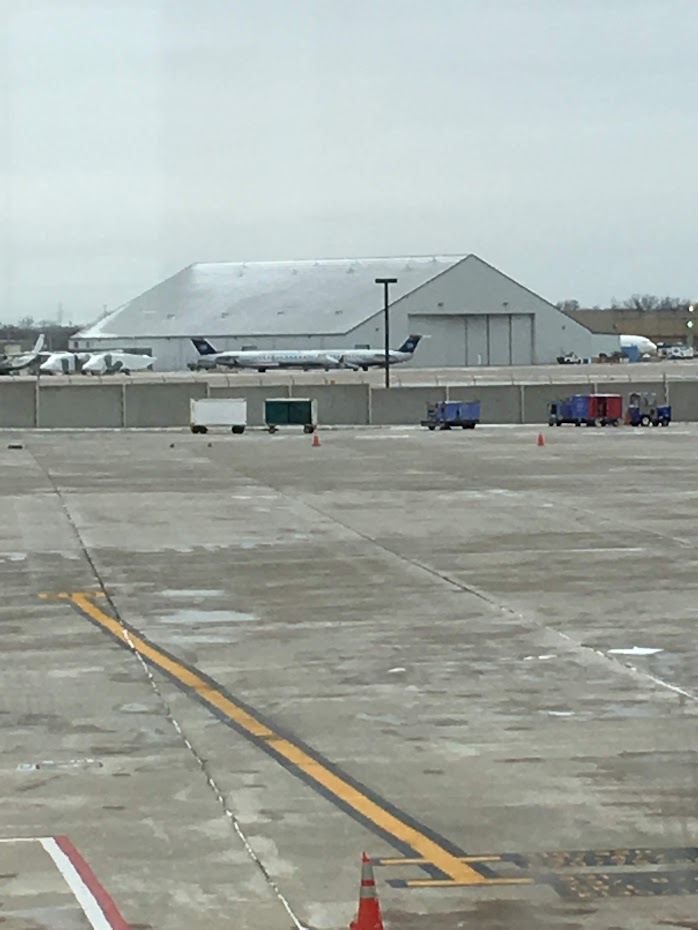 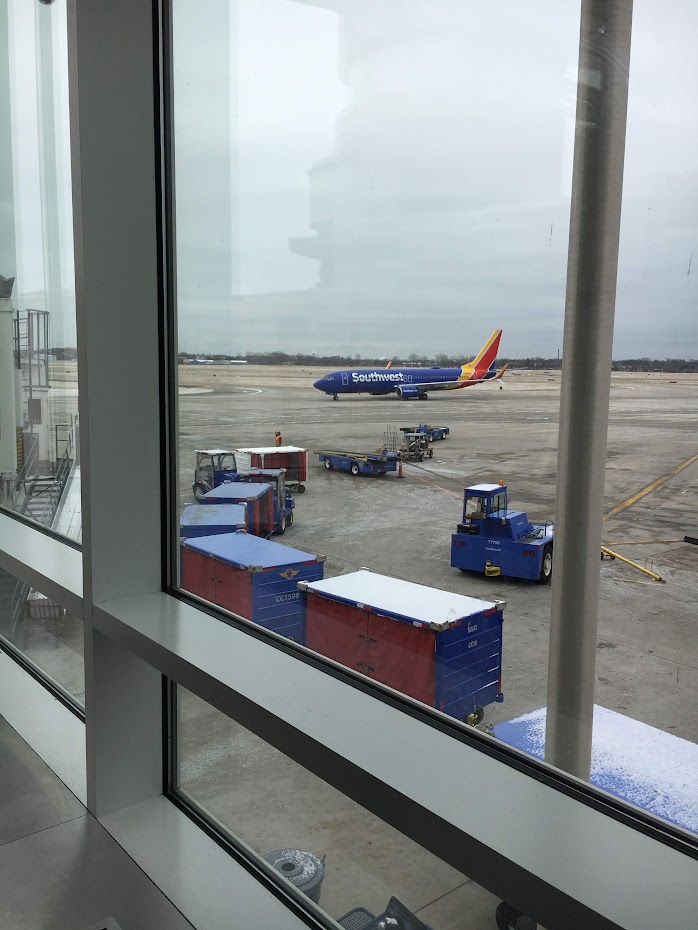 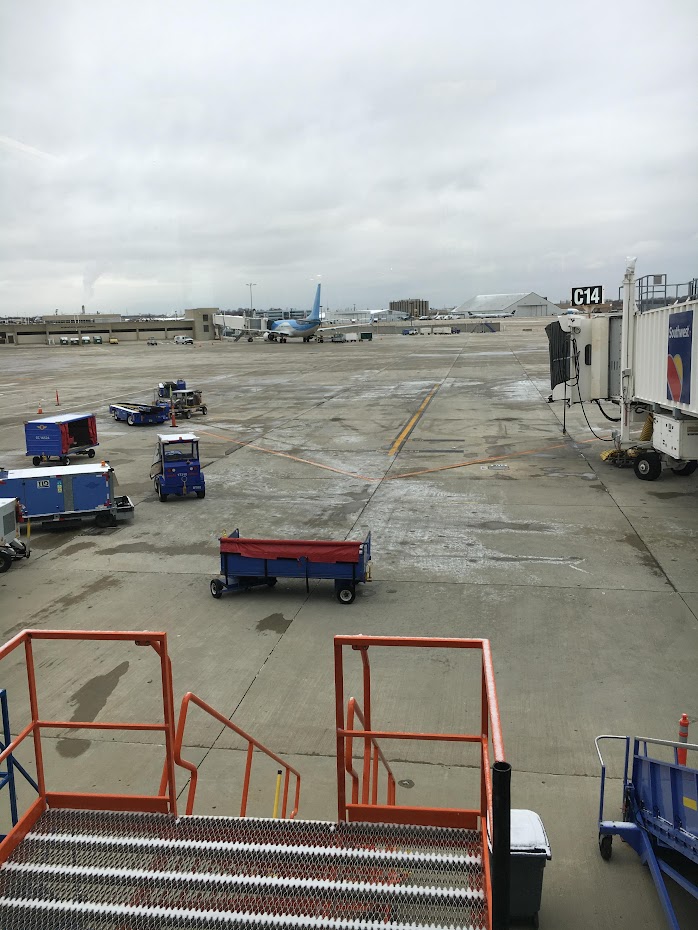 TB/LL B738 parked at the soon to be replaced IAB 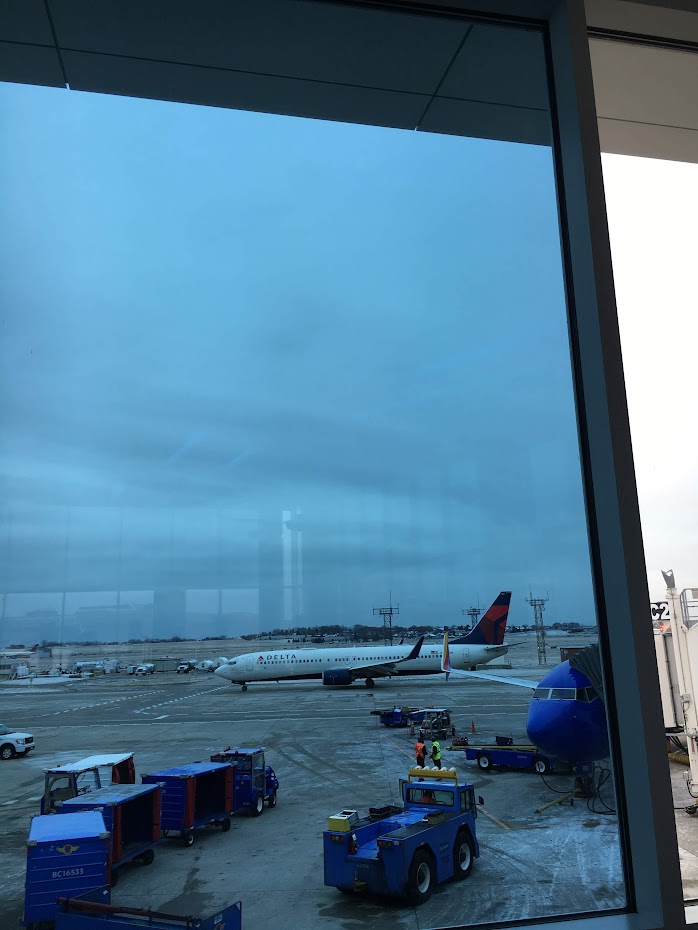 At 14:39 boarding was called. The agent performing the boarding announced that their were 20-25 open seats, and 31 passengers connecting onward to BOS from CLE, meaning that we were towards the end of the line to board. After a wait, and another large family preboarding group we were onboard and on our way down the jet bridge.

Onboard
Once onboard we made our way to the back of the aircraft and settled into a row of 3 seats on the DEF side. The first thing that I noted about this seat was its ample amount of legroom- among the largest that I have seen in a long time. The first time I tried this seat back in November 2017, I found that it was just as comfortable as the Evolve seat. This time, it wasn't. While at first it felt comfortable, its lack of padding became more and more clear, and by the end of the 1.5 hour flight my butt was very sore. 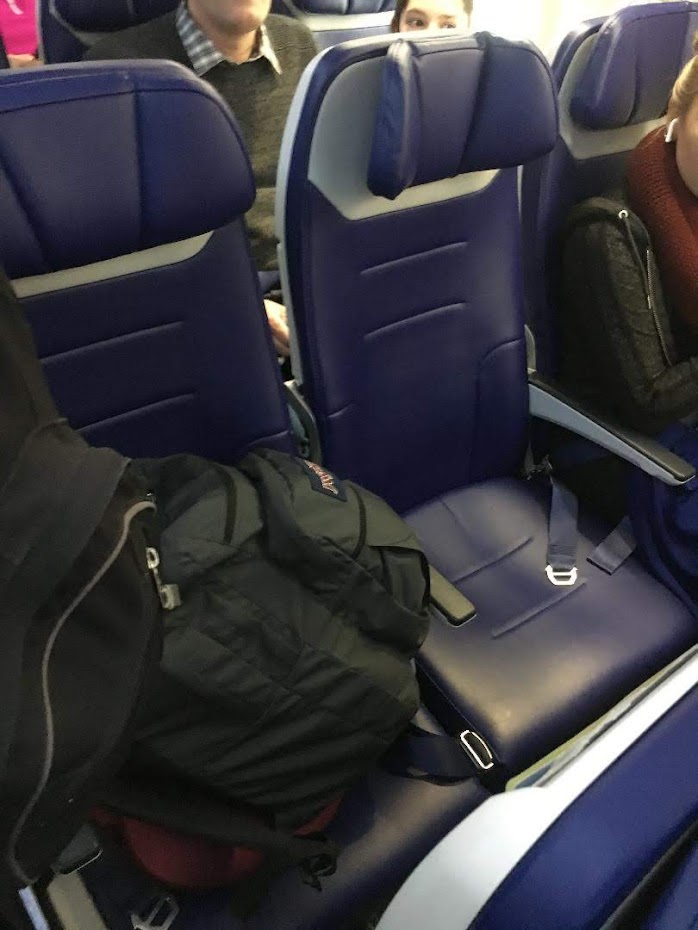 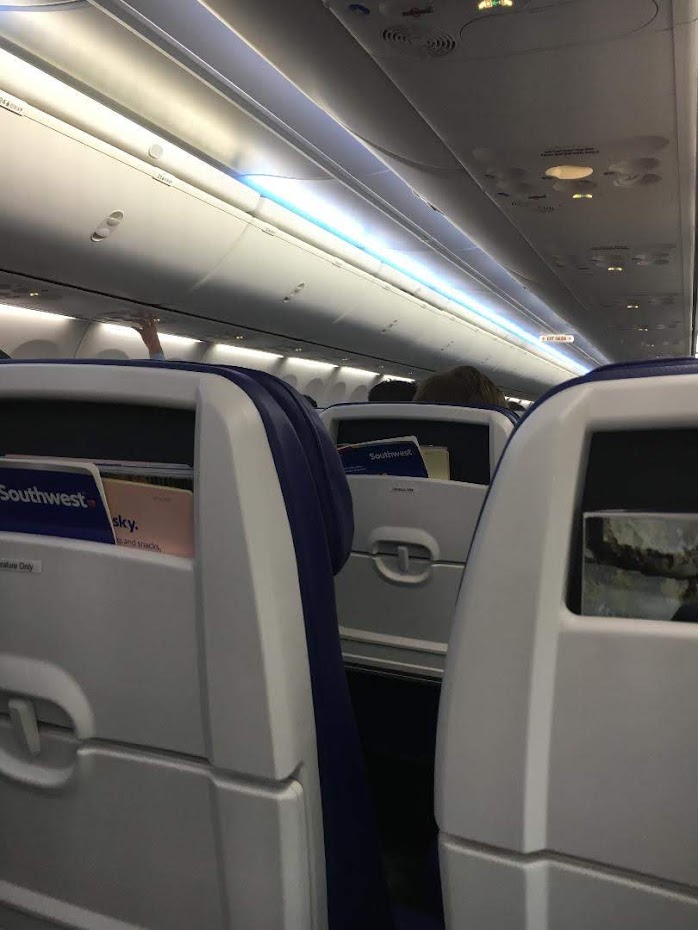 Once settled in I began to planespot, but their wasn't a lot going on. During the boarding I watched a flight attendant help someone to put up their suitcase- a rarity on a US carrier. The door closed at 15:03, and 3 minutes later (4 minutes before our 15:10 departure time) we began to push back. Right before pushback the flight crew made a very brief announcement. As we pushed back, we had a slightly smoky engine start as the flight attendants did their manual safety demonstration. 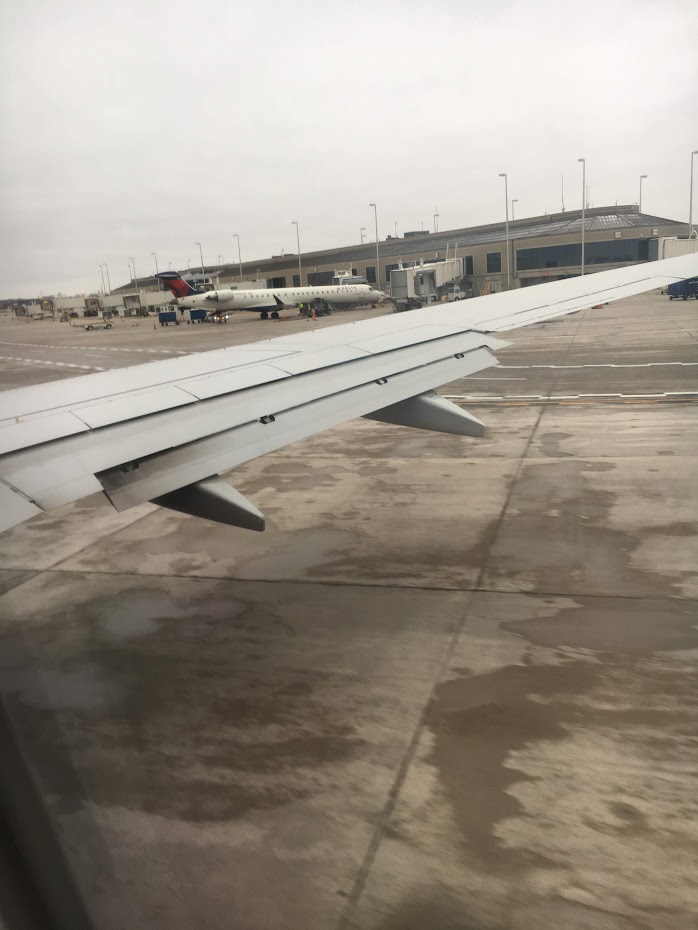 At 15:14 we executed a smooth takeoff from runway 25L. After a few seconds we were in the thick clouds surrounding the airport. Once over 10,000 feet I started browsing the streaming based entertainment. Being the curious premed that I am, I decided to watch Jane the Virgin to see how a doctor could mess up as badly as she did to create the plot of the tv show (it ended up being such an unbelievable, dense web of relationships that I decided to stop watching after 15 minutes).

Due to the short flight, once I got bored of Jane the Virgin I ended up looking out the window and reading the Southwest magazine as we cruised along at 35,000 feet. 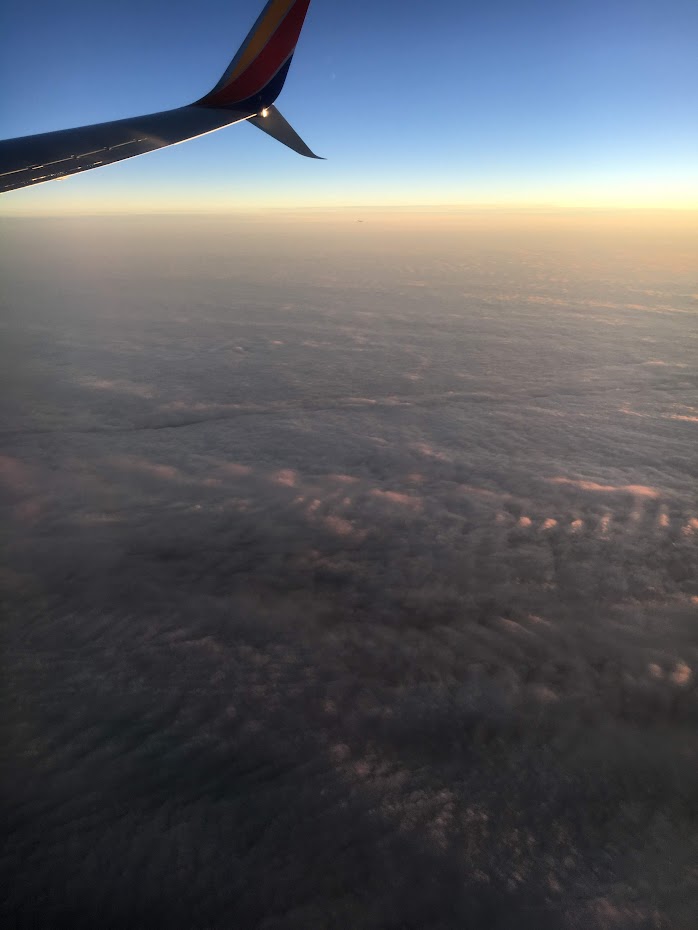 East of Albany NY, we began our descent into the BOS area. Somewhere over North Adams MA, the flight crew came on the PA and gave their prearrival announcement, also asking everyone to return to their seats even though the seatbelt sign remained on the whole time. 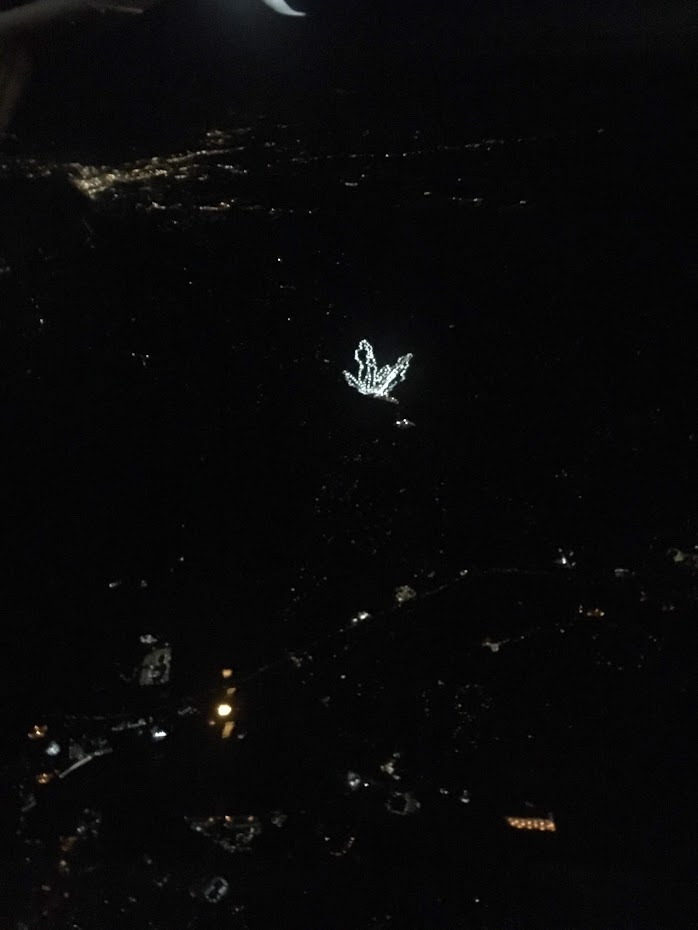 At 17:46 we executed a soft but slightly bumpy landing into BOS. At 17:55 (20 minutes early) we pulled into gate A19 at BOS and were soon off the aircraft and into the terminal. By the time we did a bathroom stop and reached the baggage carousel the bags were already coming off the carousel. After a few minutes we were on the Preflight parking bus and on our way home.

Summary
Unlike my last trip with WN, this one went very smoothly- both flights arrived early and the baggage arrived on time. While the new Heart seat might not have been as comfortable as the Evolve seat, it is hard to say if this is an issue with the design as a whole, or this particular seat, mainly because I had a better experience with it last year when I flew on that product. Overall, I would definitely recommend WN, and as long as we can find good flight times we will continue to use it for our flights to MKE.

Log Book and Previous Trip Reports
My Logbook, offering a comparison of this flight to previous flights that I have taken

2018
Porting it to and from Toronto
Southwest to Milwaukee and Back (with a surprise)
Air France, CSA Czech Air, and Alitalia to Prague, Bratislava, and Budapest

2016
From my Archives: Summer '16 rescheduled and delayed with Iberia, Vueling, and British Airways

2015
From my Archives Summer '15 Shuttle America: Do they actually meet Delta's Standards?

Re: The Milwaukee Way WN BOS-MKE-BOS

Great report! I'm going to MKE for the first time in about 2 weeks. I heard it's an easy airport, is this true?
Top

Re: The Milwaukee Way WN BOS-MKE-BOS