Flying Out of Tibet on Sichuan Airlines - Lhasa to Chengdu 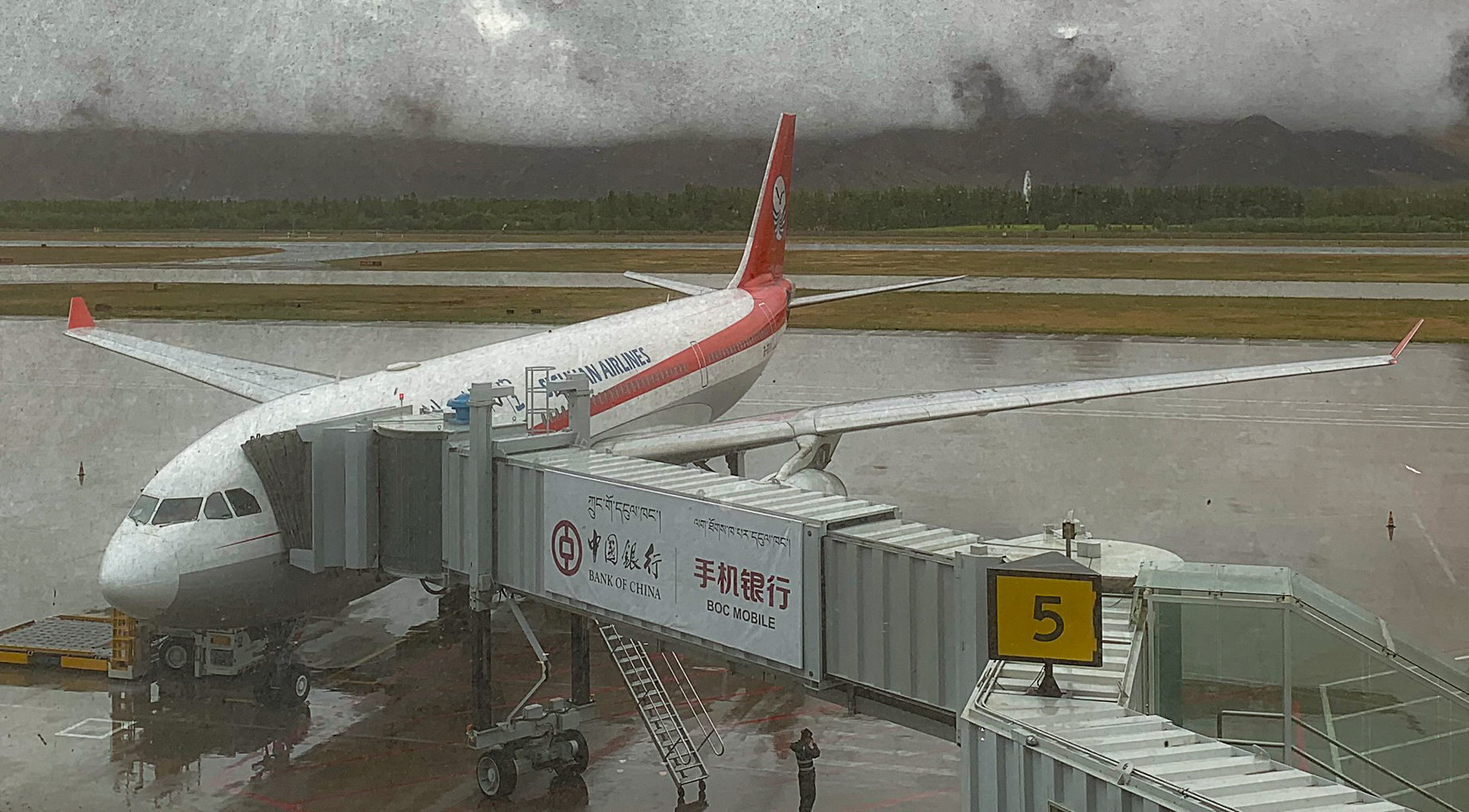 There are almost no trip reports for domestic flights between Tibet and China in English, so I am hoping this will be informative and useful to others.

On a trip to Tibet, I had to fly from Lhasa to Chengdu. This route is operated by multiple airlines, and wanting to try out an exotic airline I narrowed my choices down to Sichuan Airlines or Tibet Airlines, both of which operate on A330 around the same time. The Tibet Airlines website is entirely in Chinese and pretty much impossible to book tickets from the western world, so Sichuan Airlines it is. They have an English website in theory but their booking engine is in Chinese only, so I had to go through Expedia to book the ticket.

I got my ticket confirmation from Expedia, but trying to access the booking on the English version of Sichuan Airlines website using the PNR or ticket number does not work, so I could not select seats in advance. Online check-in does not work either, and Expedia's Customer Support provided zero help, so oh well, I had to go in blind and hope for the best.

Lhasa Gonggar Airport is a good one hour drive from the city center. Morning is busy time for LXA airport, with flights departing to all sorts of cities across China. No international flights at all. 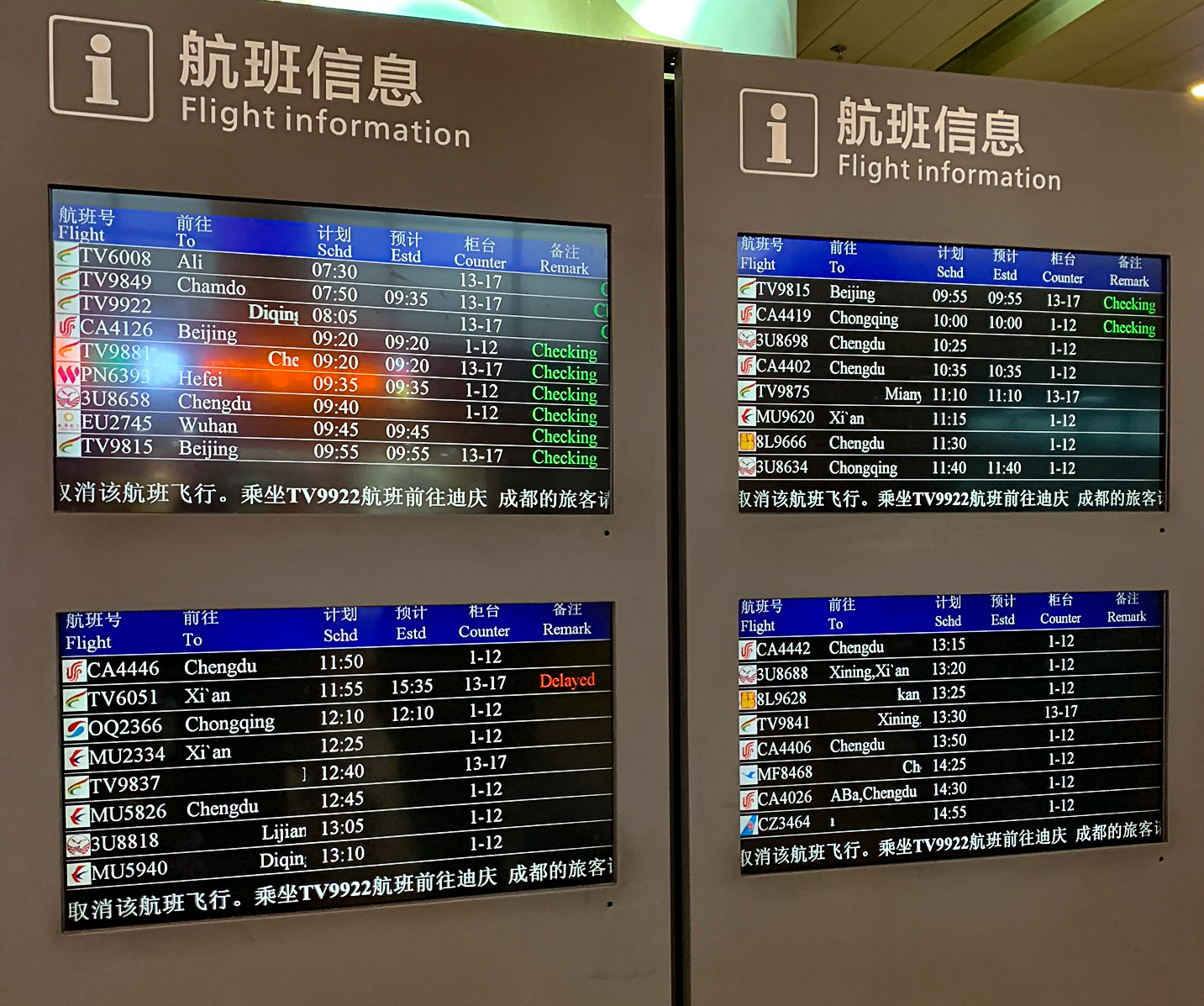 LXA Departures. How many of these cities do you know?

The airport has only one terminal, and the check-in area is divided into two parts- one side for Tibet Airlines, and other side for all other airlines combined.

Check-in is smooth. I go to a common counter, hand over my passport, he finds my reservation (phew!), I request (translated by my local guide in Chinese) for a window seat on the right side behind the wings, and he gets me one. The boarding pass issued is generic with airport branding, no airline branding! 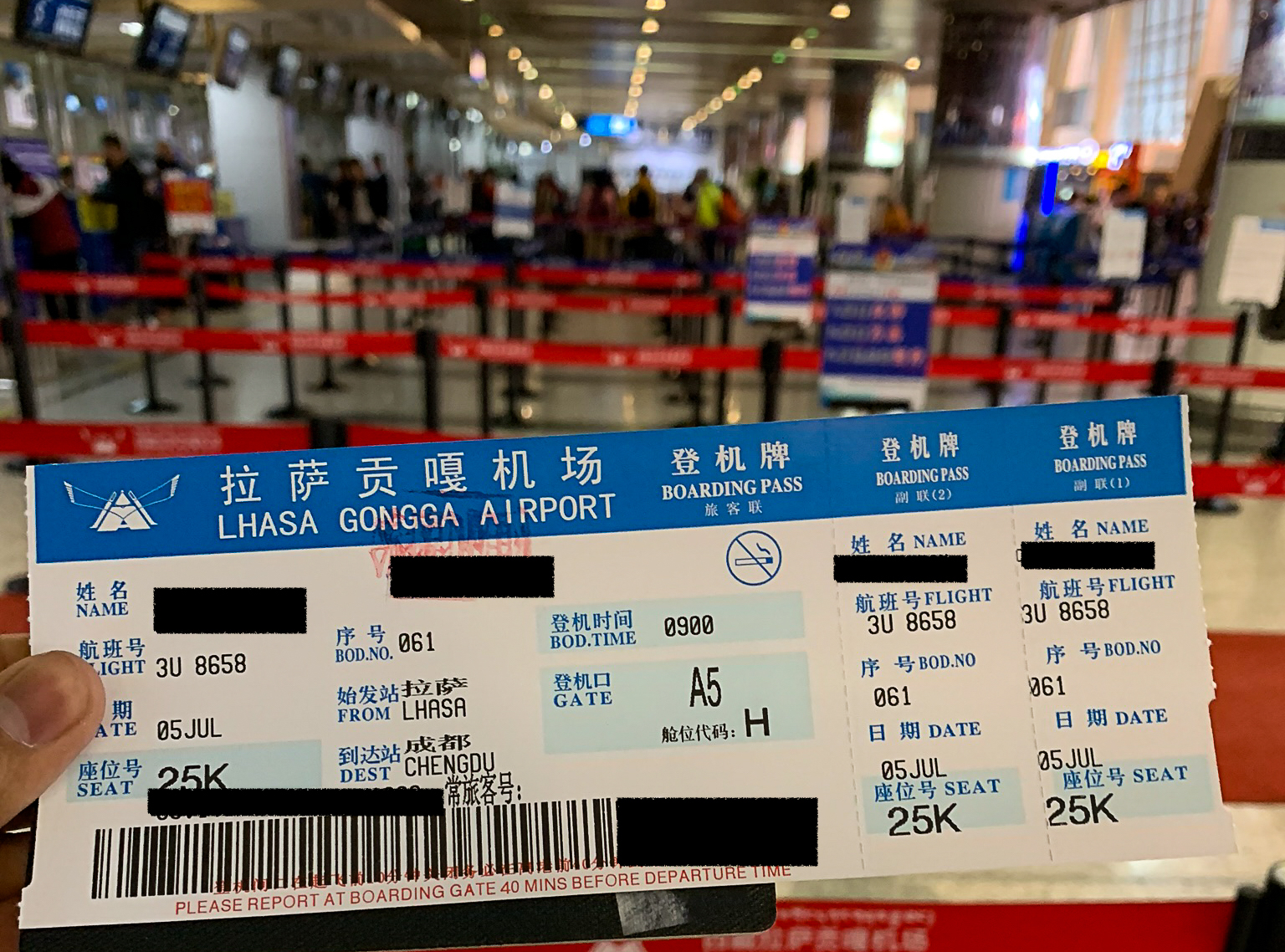 Security is pretty straight-forward, I am through it in 10 minutes. They are very paranoid about portable power banks, double-check you do not put them in checked bag even by mistake!

Post-security the terminal is pretty modern. I see a coffee shop with nice view of the runways so decide to go up there for breakfast. They have nothing breakfast-worthy to eat, and the most overpriced coffee I have drank in my life- equivalent of US $9 for a simple cappuccino! Daylight robbery! 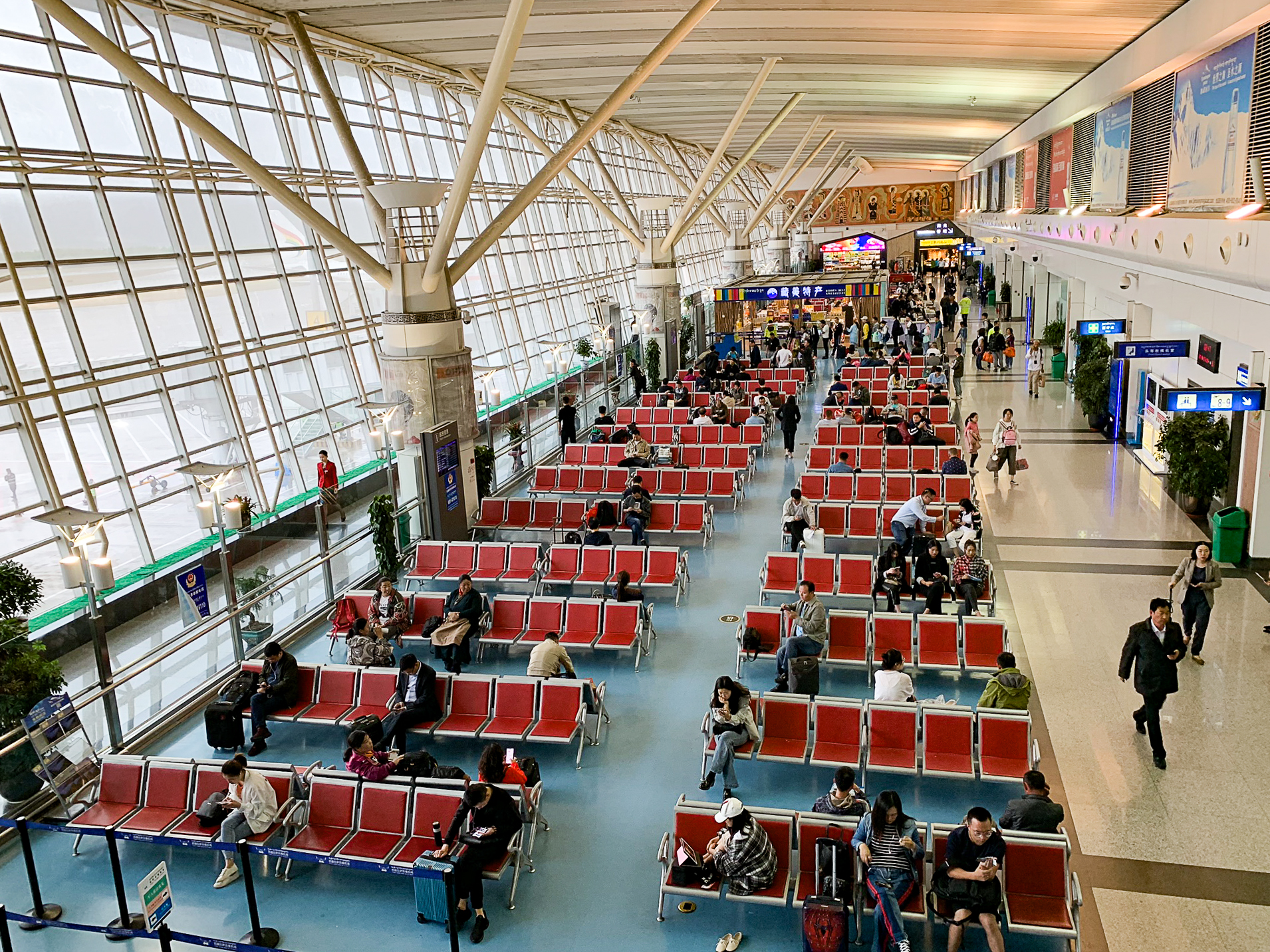 Boarding begins on-time. There is no announcement made, or at least none in English that I would understand, but the boarding process is extremely smooth. No groups or Diamond/Gold/Silver/Plastic status, just form one orderly line and get in. No pushing or shoving, everyone is pretty chill about boarding.

On first look, I am impressed by the Sichuan Airlines A330. The plane is in very good shape, Business Class is 2-2-2 recliner seats, Economy is standard 2-4-2 with comfortable non-slimline seats. The crew is immaculately dressed, smiling and helpful 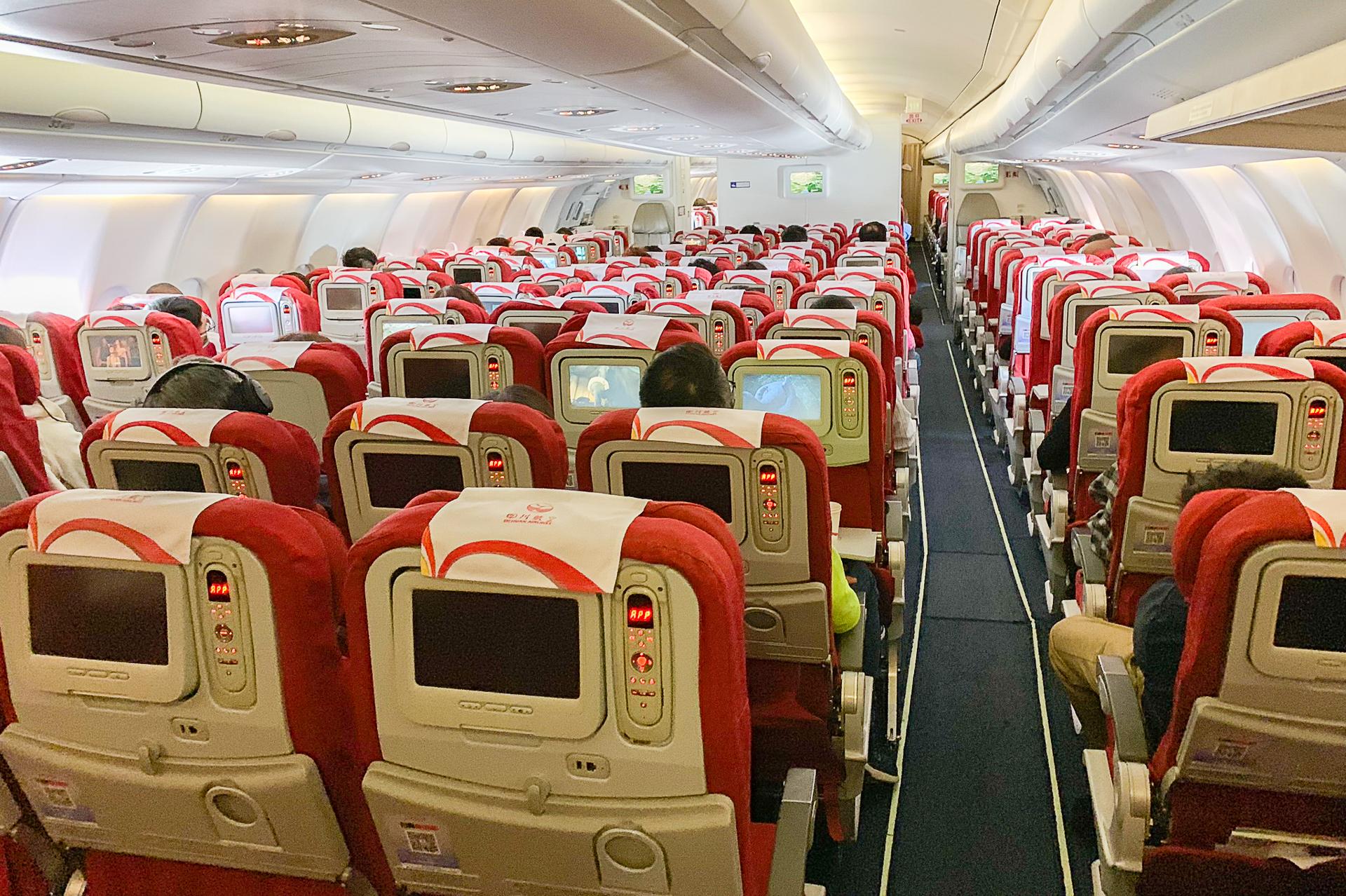 I have a window seat just behind the exit row in the rear cabin. Initially the next seat was empty so I rejoice but soon enough a Chinese man comes and settles down with zero respect for personal space, intruding into my seat. I see rows of empty seats behind so I ask the FA if I can move there. She tries her best to explain me in English "after takeoff". Fair enough.

As soon as the seatbelt sign is off, the FA I had previously talked to comes to me to remind, again her best attempt in English, "sir you can move now". I find the very last row empty and move there. 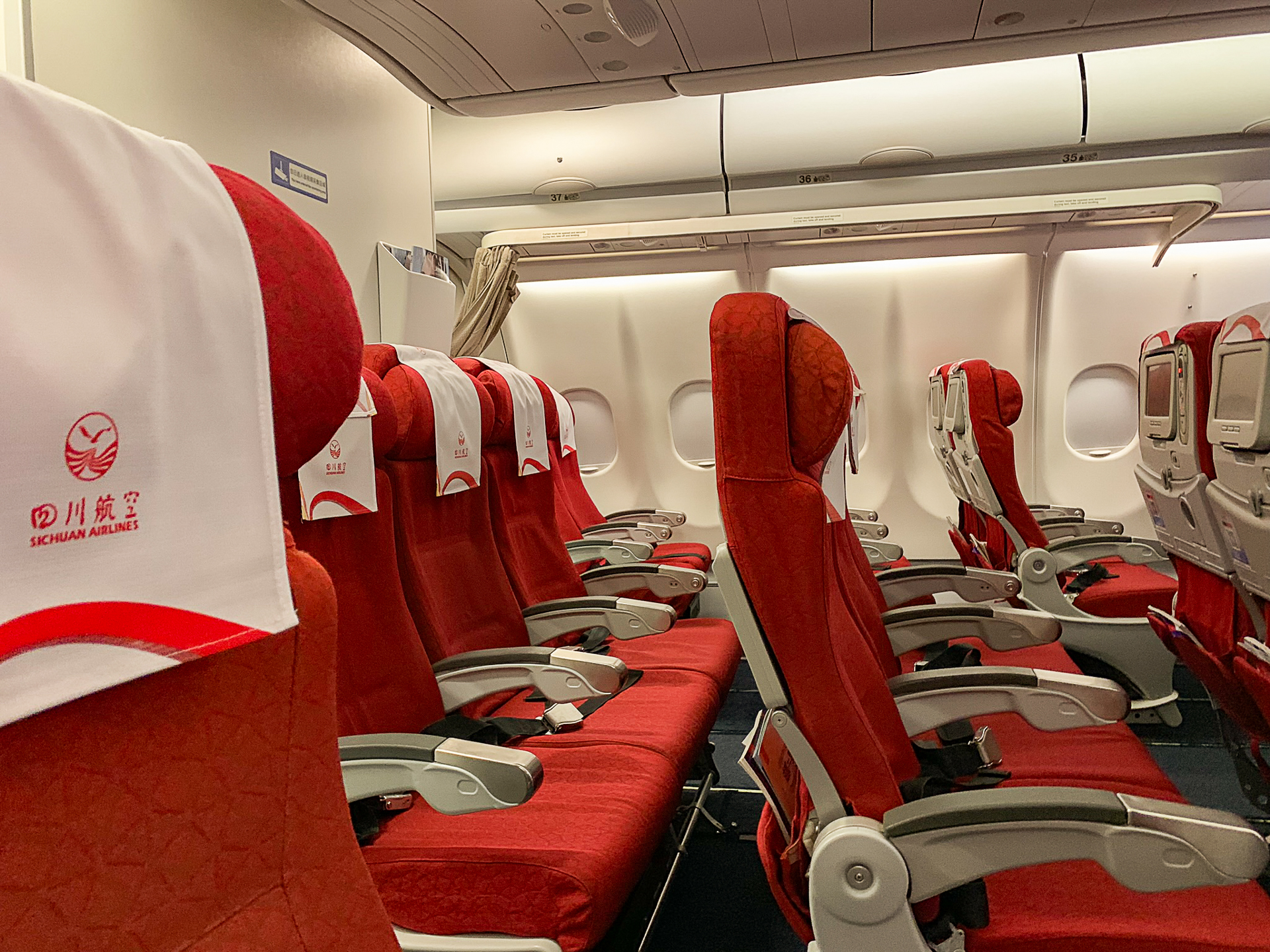 The last few rows were completely empty on this flight

IFE screens are provided on all economy seats. They were turned on while taxiing for safety video but turned off for takeoff. I thought they probably don't offer IFE on domestic legs, but the screens turn on 15 minutes after takeoff. The collection is nothing great, but I am just glad to find a handful of English movies on a domestic Chinese flight. 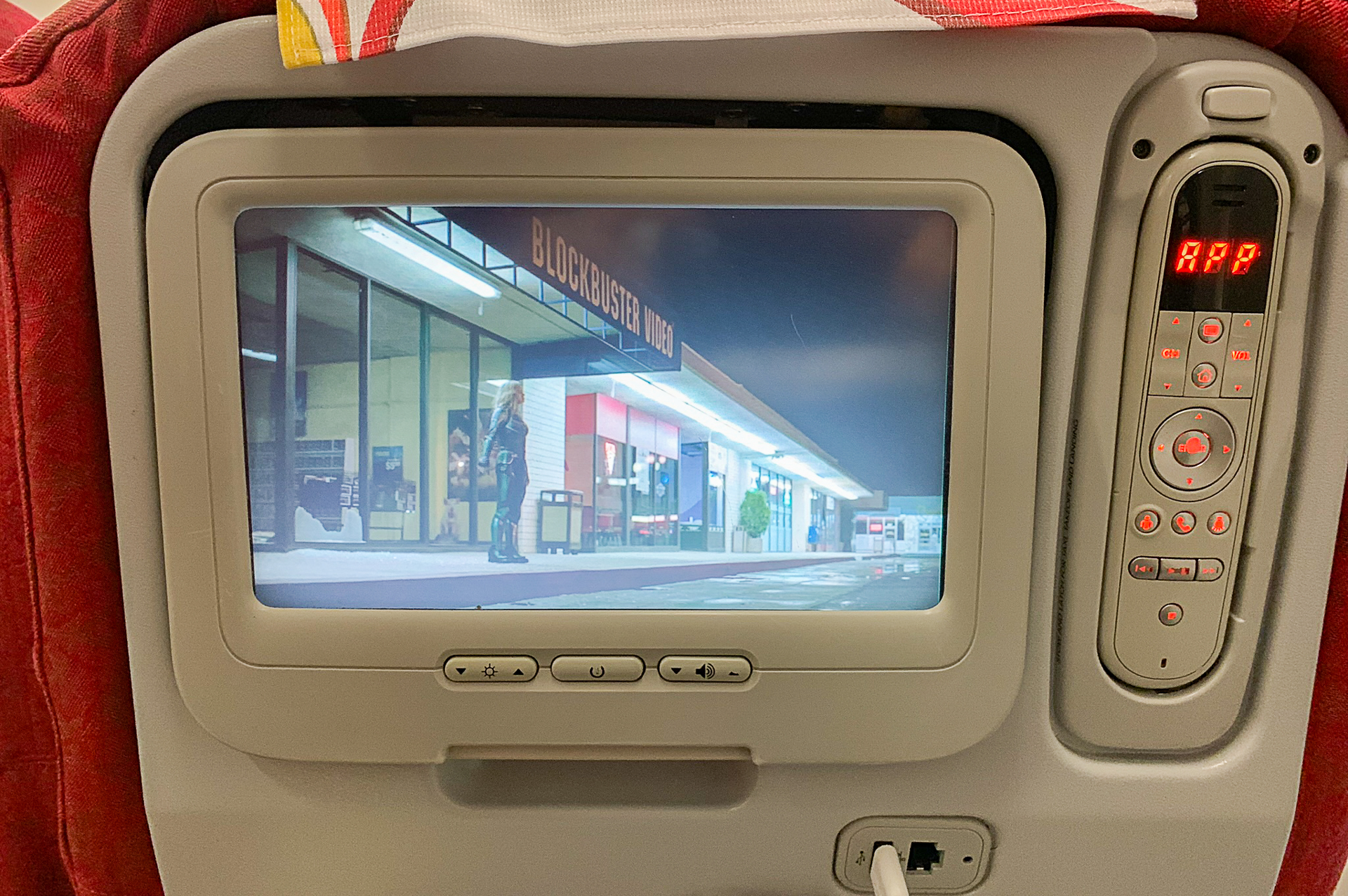 Captain Marvel while flying over Tibet

Earphones not provided on this domestic flight. I can use own earphones, but the seats have the old-style two-pronged jack, so a normal earphone gives sound in one ear only. Well, this will do for now. I decide to watch Captain Marvel with mono-sound.

The Sichuan Airlines crew is very friendly, and to my pleasant surprise, speaks decent English too, which I was not expecting on a domestic flight. The safety video and announcements are made in English too after the Chinese equivalent. I am the only non-Chinese passenger on the entire flight, so I'd like to believe this was personalized for me!

There is USB port for power at every seat, and working well. Also, an ethernet port just in case you want to run a server in the air. Is this what they call "cloud computing"?

Complimentary snacks and drinks (hot, cold, many types of juices) are served halfway into the flight. The snack packs all have descriptions in Chinese only, so I ask the crew what each of the item is. They smile, giggle, and feel bad that they do not know the English names. Turns out they are coconut biscuits, dried cherries and some spicy chicken thing. 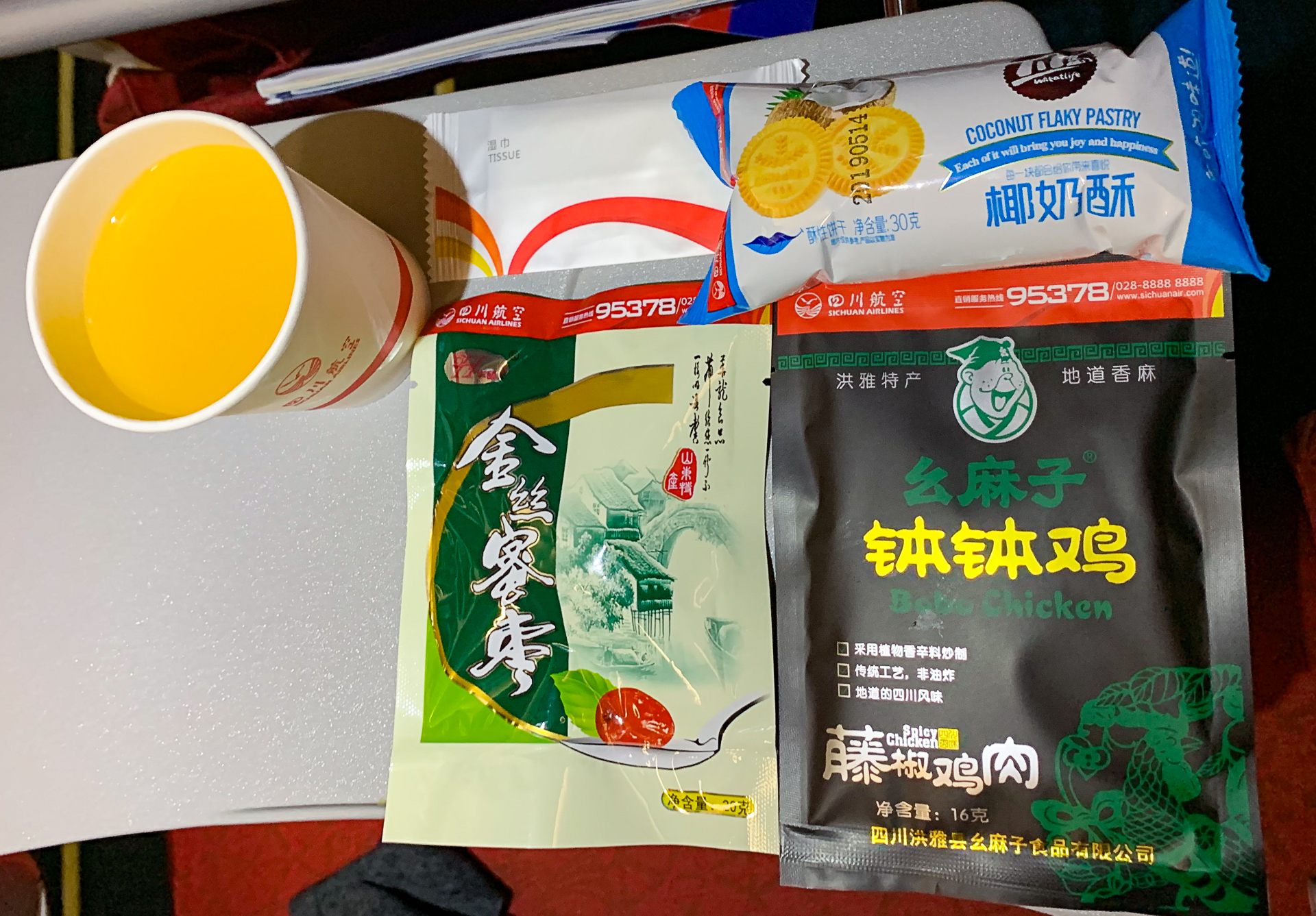 As soon as the drinks service reaches the end of the cabin, they take the carts back to the front and start Round 2 of drinks service! That's impressive on a sub-2 hour flight.

Sichuan Airlines is fully committed to using the giant pandas from their hub city of Chengdu as much as they can in their branding. The safety demo has an animated panda, and the female FAs wear aprons that have a very cute panda design. Unfortunately no pics of it.

The restrooms are immaculately maintained, complete with flowers even in the Economy section loo, and strangely a Winnie the Pooh air freshener (wait, I thought Winnie was banned in China?) 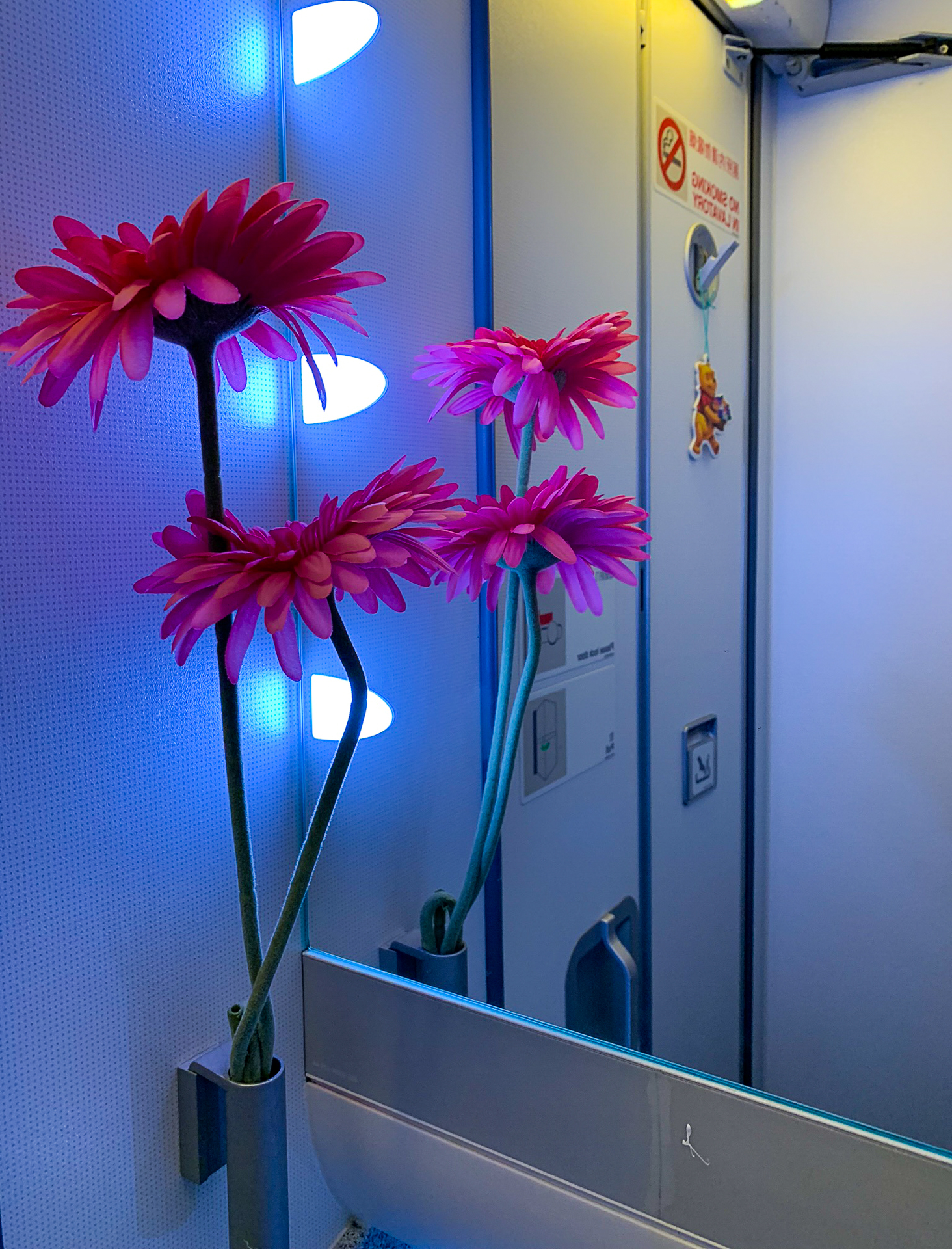 IFE screens have a live flight map, so that's great but you cannot choose what view you want. It just auto flips through different views.

The flight is eventless and we land at Chengdu Shuangliu International Airport almost 30 minutes before scheduled arrival time. The airport is huge, we do not have a gate, so we go on a Grand Tour of CTU until they can find us a gate.

Eventually we find a gate, aerobridge is attached, but instead of walking into the terminal, everyone is made to get out of the aerobridge midway and go down to waiting buses! Strangest deboarding procedure I have seen. 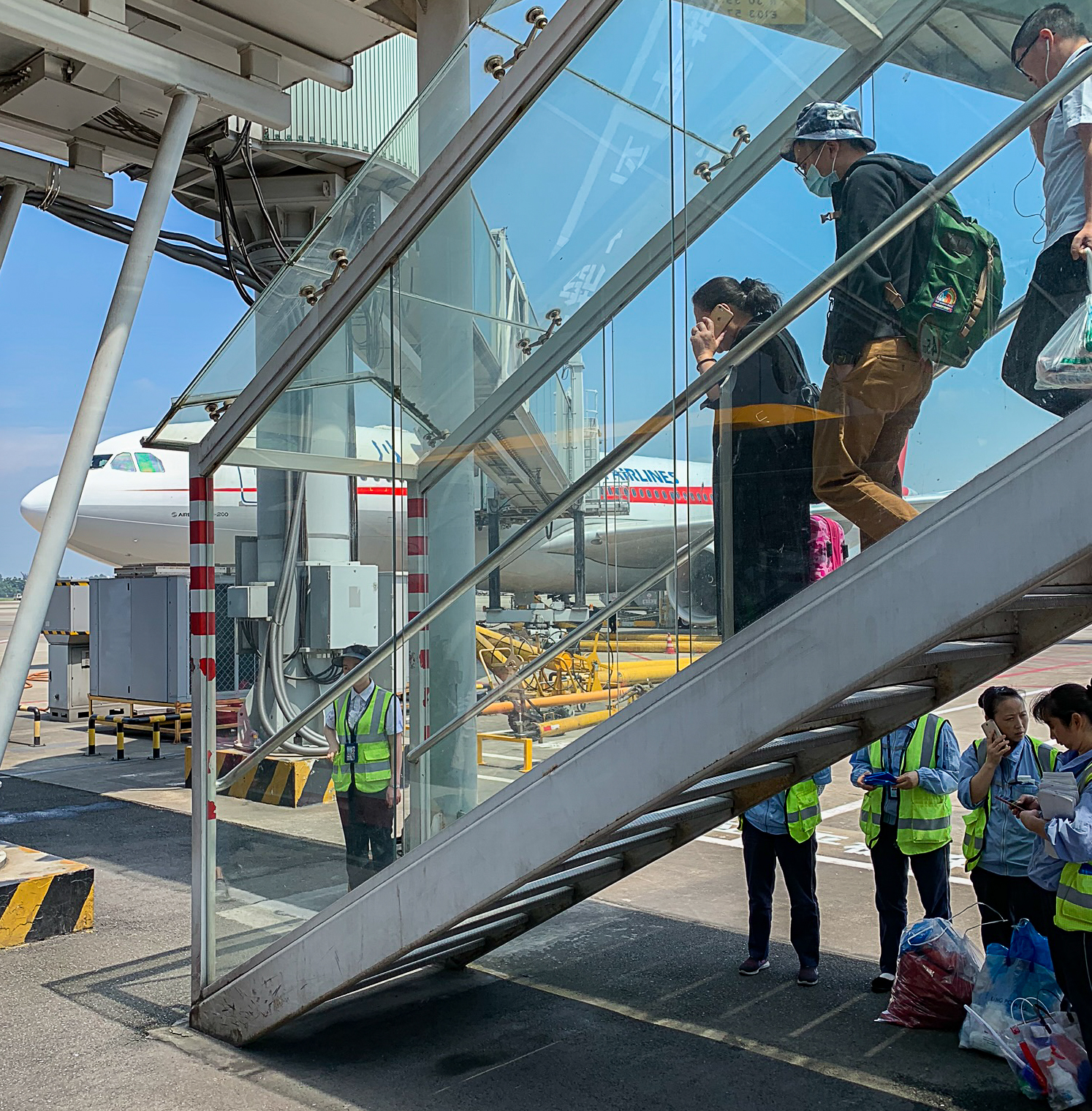 Out on aerobridge, diverted down to the ground

I am 100% impressed with my first and only flight with Sichuan Airlines. Despite the hoops to jump through to book tickets as a non-Chinese speaker, once at the airport and onboard, the experience is great. If you have a choice of picking Sichuan Airlines for a domestic flight in China, absolutely go for it!
Top

This is an interesting trip report -- since I rarely read anything about 3U, I'm glad I did this time around. I'll definitely consider them on future domestic trips, even if the flights won't credit to any partner FFP.

KiloRomeoDelta wrote:
Eventually we find a gate, aerobridge is attached, but instead of walking into the terminal, everyone is made to get out of the aerobridge midway and go down to waiting buses! Strangest deboarding procedure I have seen.

Out on aerobridge, diverted down to the ground

Nice TR, great pictures! For Chinese domestic flights I can recommend booking through www.ctrip.com or one of their affiliates.
Top

Good report, though it would be nice to have seen some photos of the scenery outside, which I assume would have been stunning around Tibet.

KiloRomeoDelta wrote:
The restrooms are immaculately maintained, complete with flowers even in the Economy section loo, and strangely a Winnie the Pooh air freshener (wait, I thought Winnie was banned in China?)

Irregardless of any ban, do you really want your bathroom (or anywhere else for that matter) to smell of Pooh?
I like artificial banana essence!
Top

allrite wrote:
Good report, though it would be nice to have seen some photos of the scenery outside, which I assume would have been stunning around Tibet.

Sorry, the weather was terrible, we took off and were into the clouds within 30 seconds and stayed in or above the clouds the entire flight so no stunning vistas to be seen. This is literally the only pic I managed to snap before we got into the clouds- 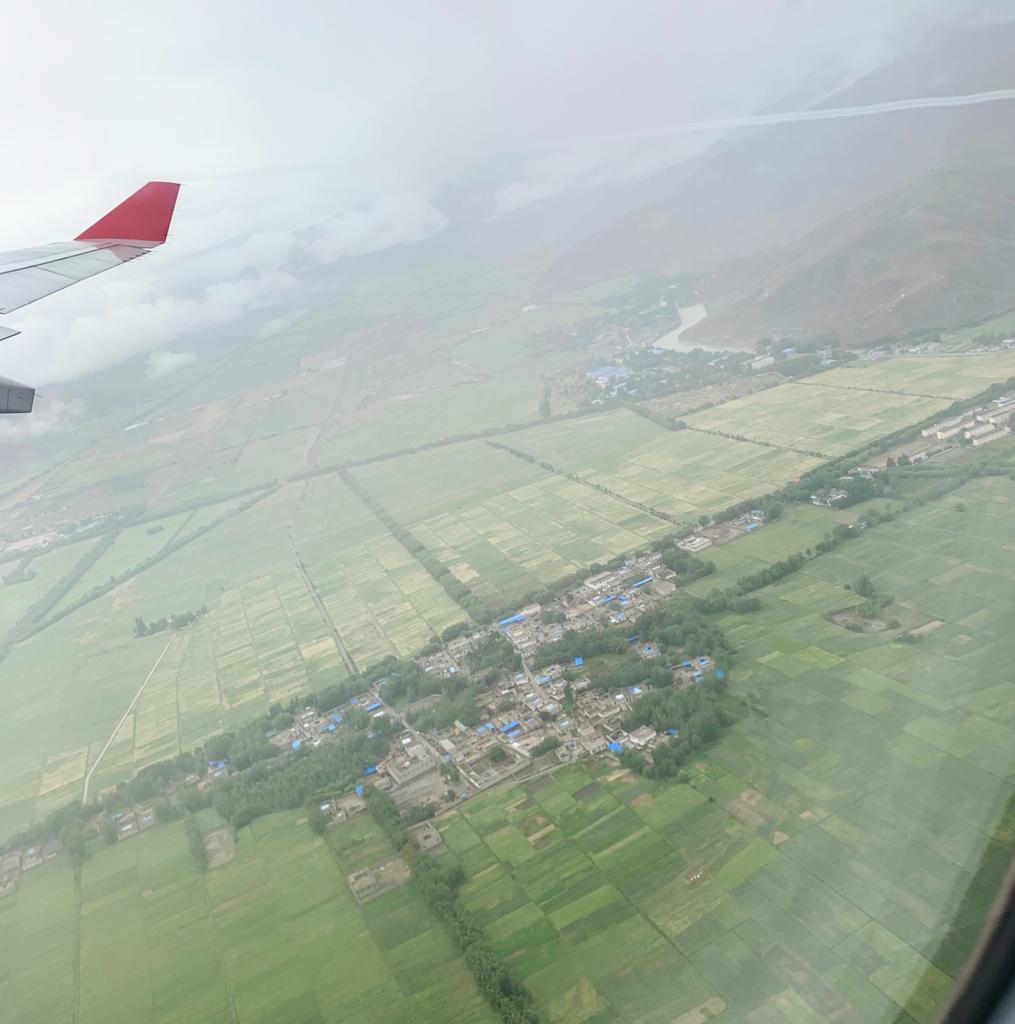 Not from the flight, but to make up for it, here is a better pic of scenery of Tibet instead- 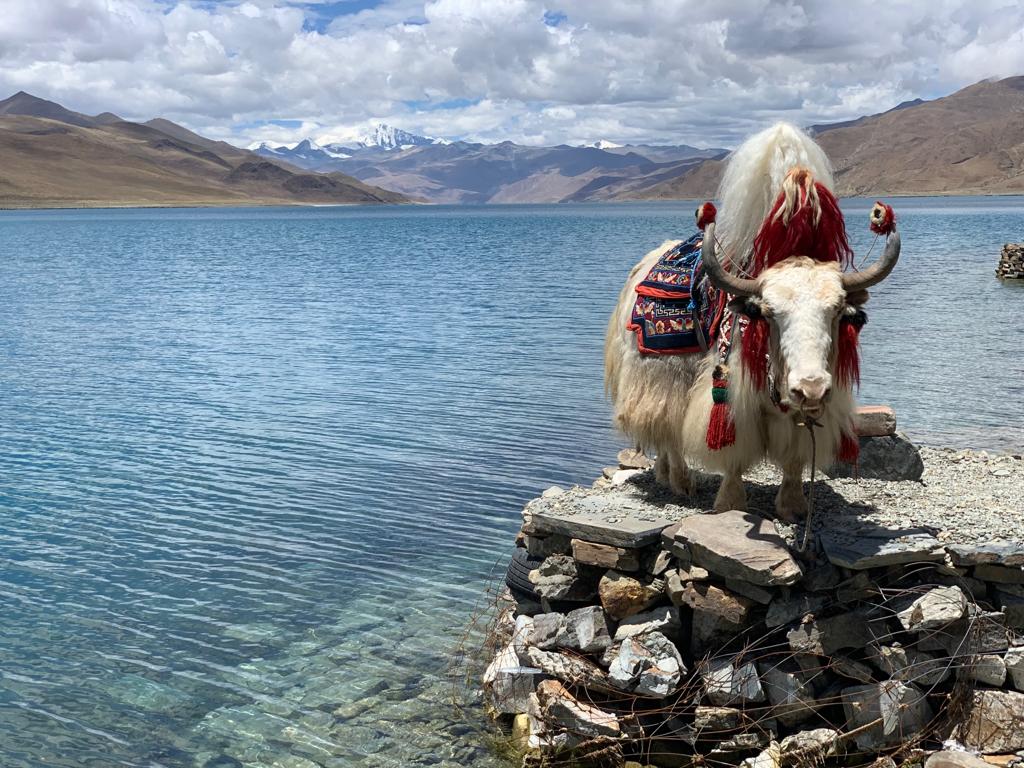 KiloRomeoDelta wrote:
Sorry, the weather was terrible, we took off and were into the clouds within 30 seconds and stayed in or above the clouds the entire flight so no stunning vistas to be seen. This is literally the only pic I managed to snap before we got into the clouds-

No worries and I sympathise! Back in March 2007 when we flew around China the everpresent smog meant almost no ground views, except when landing around Guilin (now, that was stunning). By the flight out it was all cloudy again!
I like artificial banana essence!
Top
Post Reply