Seaplane on a commercial flight in EU? Yes, and it's Business class!

Seaplane on a commercial flight in EU? Yes, and it's Business class!


For some time I have been noticing a seaplane crossing the skies of Copenhagen. After some research, I found out that since 2016 a company called Nordic Seaplanes operates scheduled commercial flights between Copenhagen and Aarhus, the two biggest cities in Denmark. It is a service that runs 5 times per day between the two cities and is targeted primarily for business travellers. Interestingly, the company was founded by the same 2 Danish investors, who also founded the Maldivian Air Taxi in the 90s.
I got really excited about this special flight and was determined to try it out. 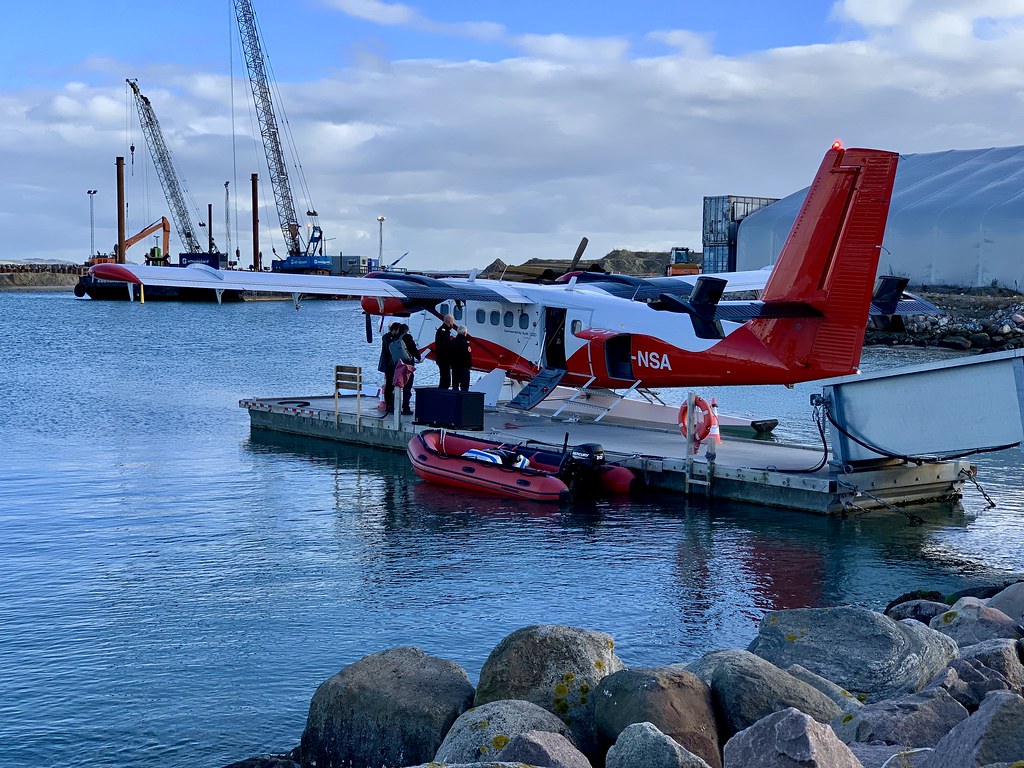 Booking
The price of a one way ticket for the 45 minute flight is 1800DKK, about 240EUR, which is not cheap. I saw however, that they do offer discounts for special occasions, so I waited. One day I received a newsletter informing me of a special halloween price of 666 DKK (89EUR) for flights on the 31st of October. As I am not particularly superstitious and that day I was free anyway, this was the perfect opportunity. I decided however to take a bus to Aarhus and take the flight from there back to Copenhagen.


The Seaplane
I was astounded to learn that this Twin Otter DHC6-300 is 41 years old. There is a long and eventful story behind how Nordic Seaplanes acquired the aircraft. To sum it up, they bought it from Iranian Naft Airlines. On their website they even have a photo of the aircraft with the cabin fitted as it was in 1978. That means cigarette ashtray metal boxes with every seat, and also a picture of the Khomeini and Khamenei on the front wall. They also write about the complex business aspect of acquiring an aircraft in 2014 from a country where there was an embargo in action. All in all they managed to buy it through the United Arab Emirates. It was basically stripped down and reequipped with modern avionics in Switzerland and the company got hold of the refitted machine in 2016.


The Flight
The flight leaves from Aarhus Sea Airport, which is located at Aarhus harbour. This is a busy area where ships and trucks are loading and unloading containers and there is also a lot of construction going on. The “terminal” is situated in an office building and consist of a waiting lounge and 1 simple check in counter. I was there 2 hours before my flight, because I wanted to film for my trip report video and was curious to check out the area as well. In the lounge there are a couple of tables with mostly business topic reading material, a good quality coffee machine, charging station, umbrellas for getting to the aircraft in rainy weather and a merchandise cabinet. Although the beauty of a business class flight is still just awaiting for me sometimes in the future, I imagine this lounge could be considered a simple and functional business lounge. They have them both in Copenhagen and Aarhus and I believe the one in Copenhagen is even better equipped. For this flight we were 5 passengers in the aircraft that can seat 15. As I was checking their booking system, many morning flights were sold out, but this was a flight at noon, which is prone to be a less busy one. 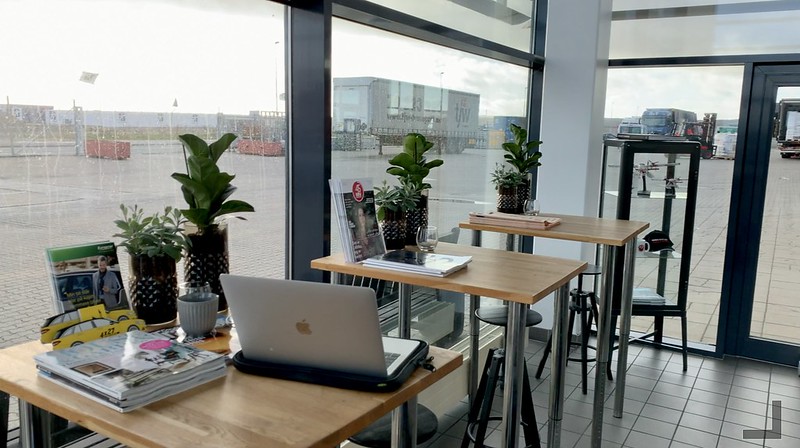 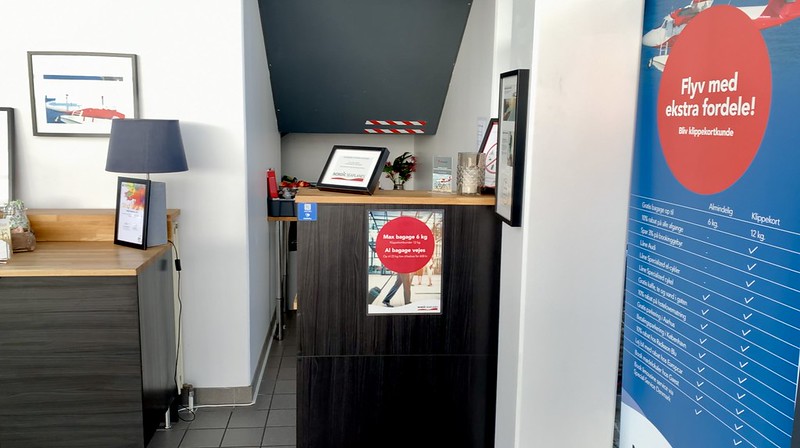 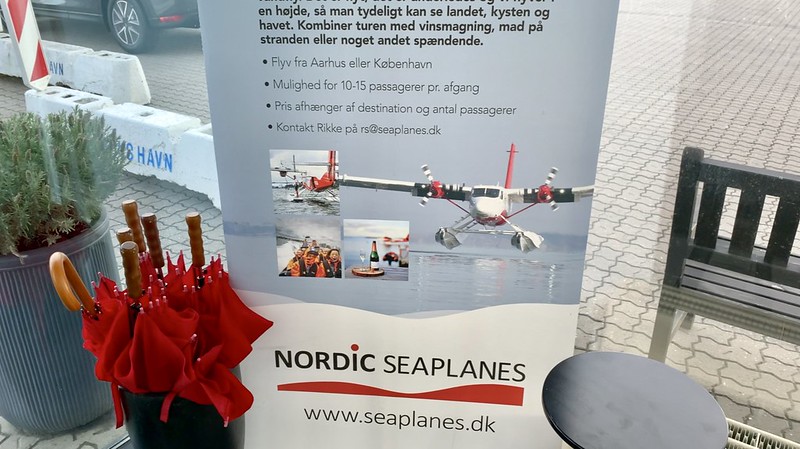 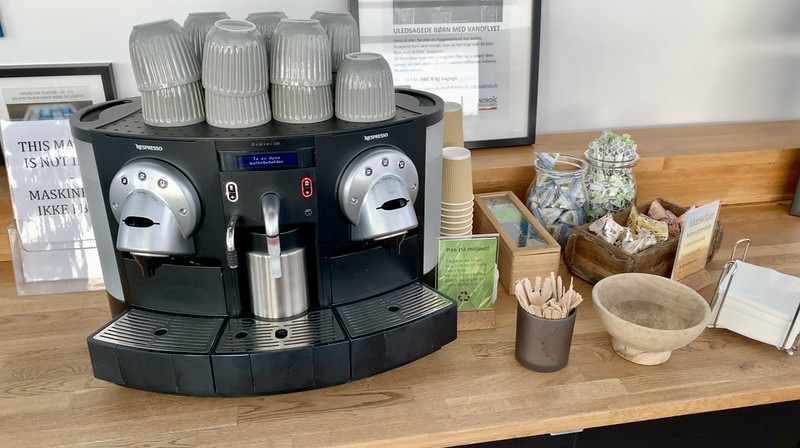 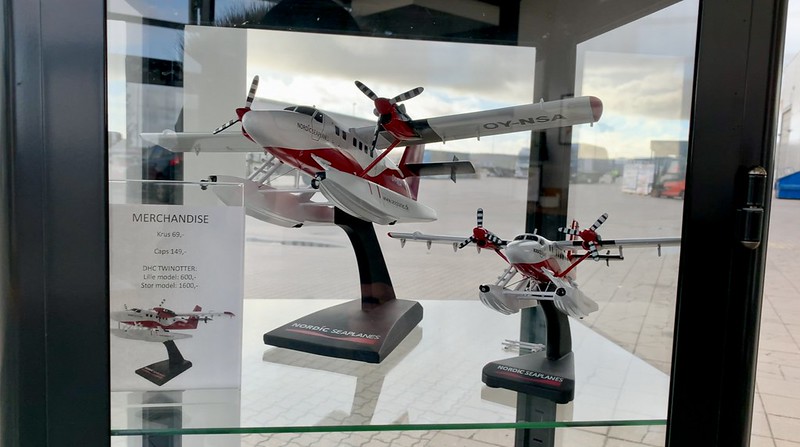 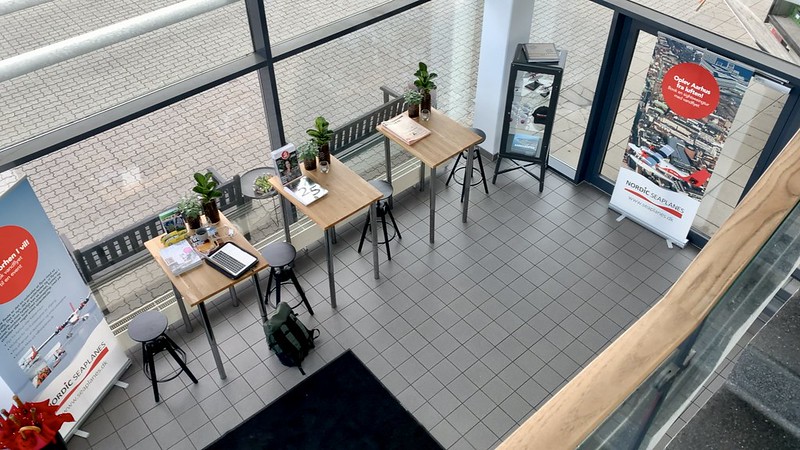 These flights are clearly targeted for business travellers and I see why. It’s much more convenient to depart and arrive from the city centre, or close to the city. Although there are commercial flights between the two cities operated by Scandinavian Airlines, Aarhus airport is 36km from the centre and even though it is very easy to get to the airport in Copenhagen (both metro and train service) the Copenhagen Sea Airport is located literally in the centre of the city, close to the famous little mermaid statue. This saves a lot of time.

After boarding, one of the pilots gave a short safety briefing and in no time we were taxiing out from the pier to the open waters. After full thrust was applied, we lifted off of the water after just seconds. However, the seaplane was climbing rather slowly after that. The maximum altitude for this aircraft is 3km. I am not sure how high we were flying, but we did fly through clouds. The view was excellent, it felt as if I am flying above a huge map and I could see clearly the towns and farms. They claimed in their website that at this altitude one can still use their own phone internet and it was true. I was checking our route through the flightradar24 app as we were flying, using my own mobile data. 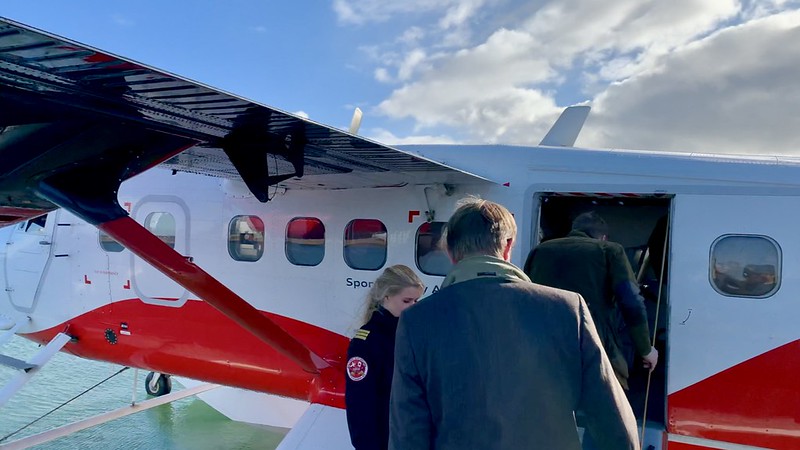 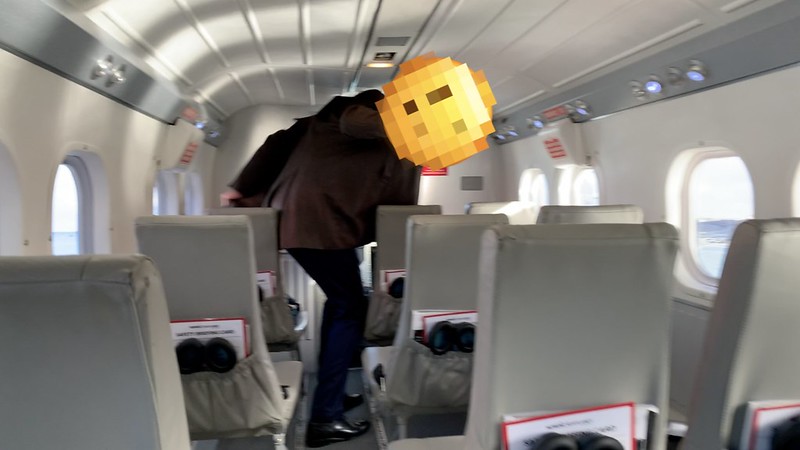 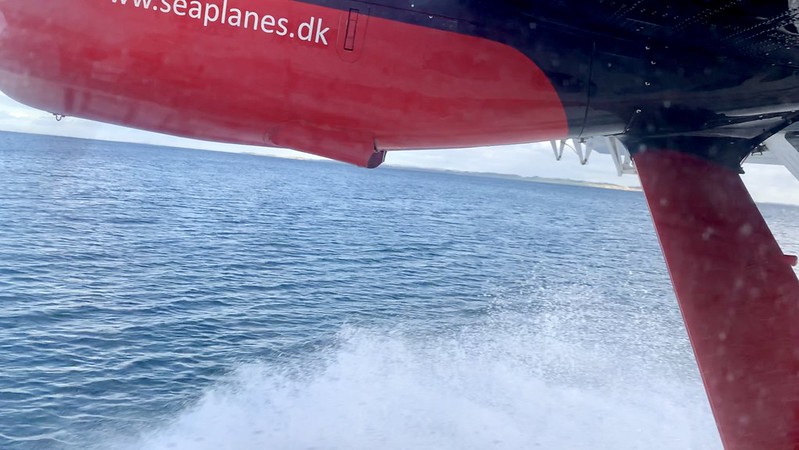 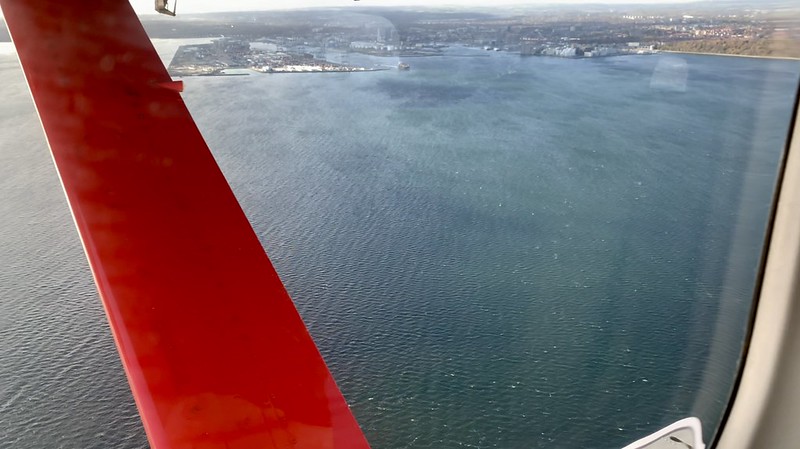 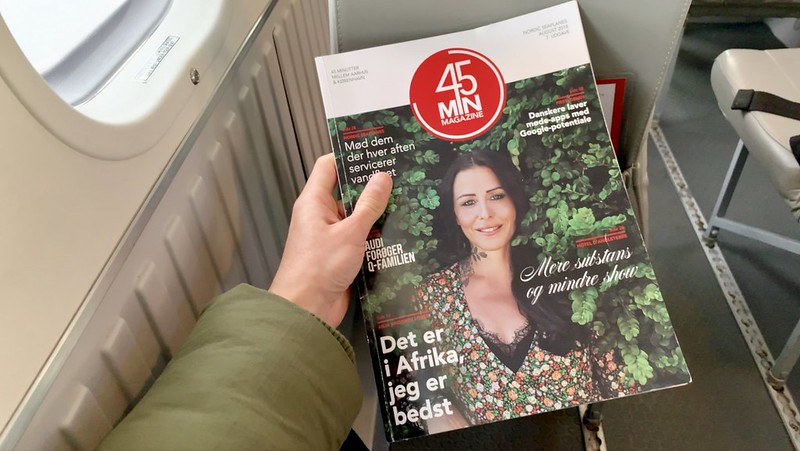 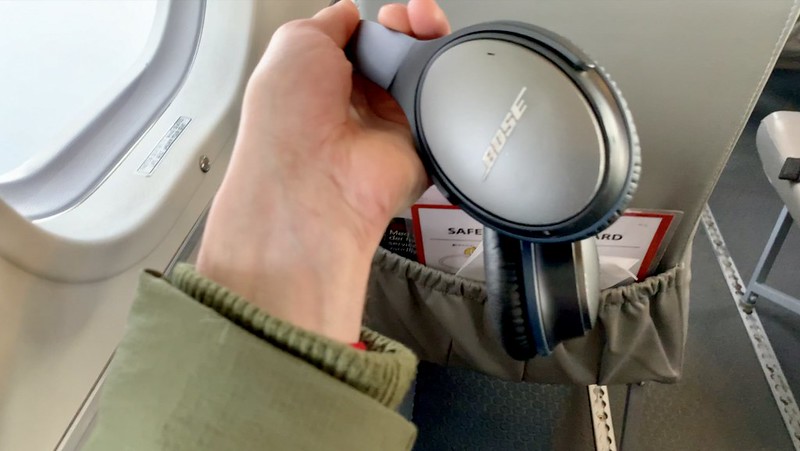 For every seat there was a safety card, 2 magazines, a sickness bag and a noise cancelling headphone. The whole flight was rather bumpy, but in no time we were approaching Copenhagen. I always assumed landing on water must be rough, but it was one of the smoothest landings I have ever experienced. Taxiing into the pier took about 5 minutes, passing the statue of the little mermaid and the crowd of tourists that gather around it. The moment we passed by, everyone turned from the little mermaid and started to take pictures of the seaplane. What a rockstar welcome. Just the way I like it 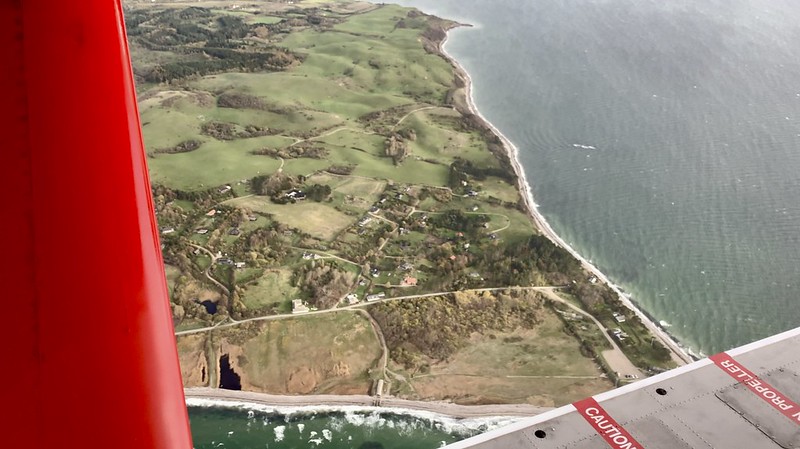 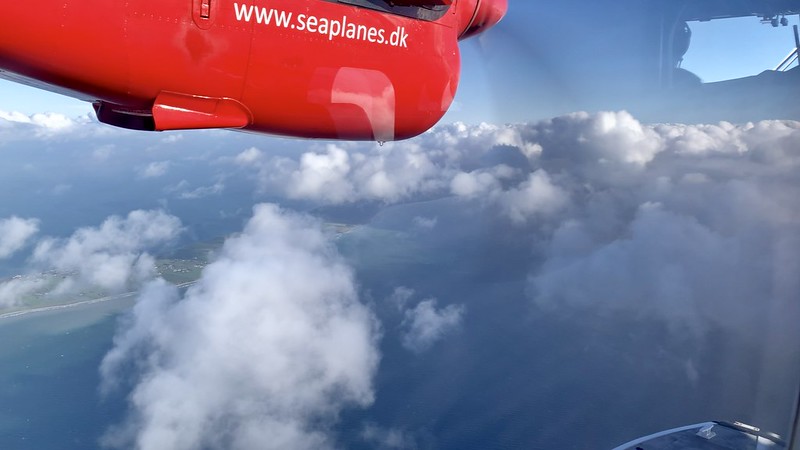 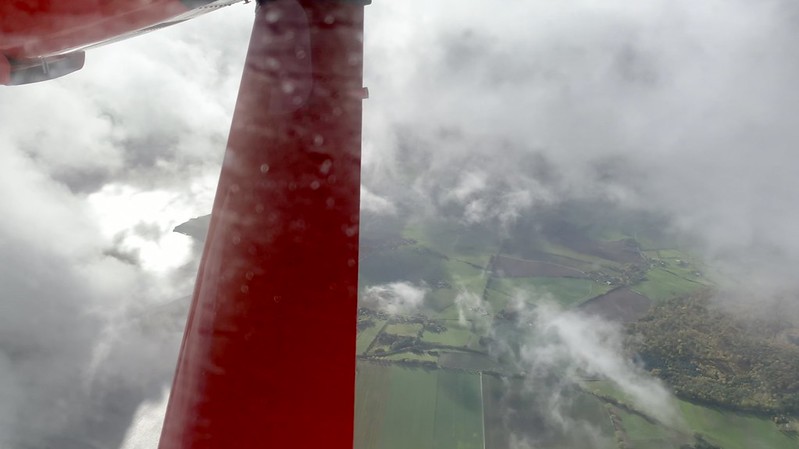 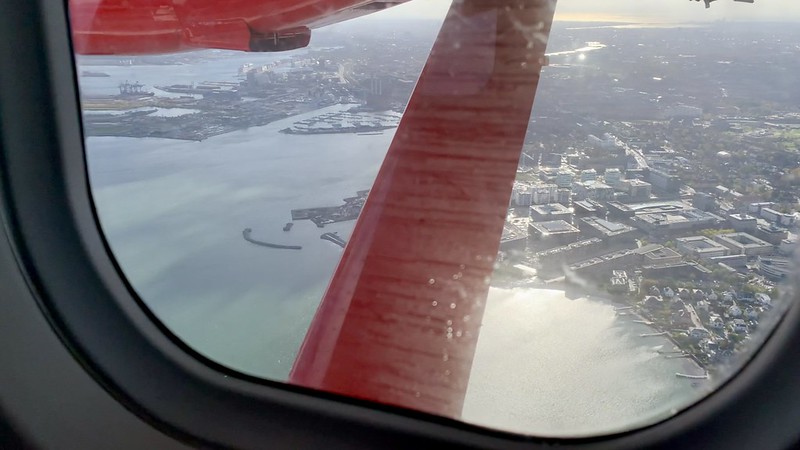 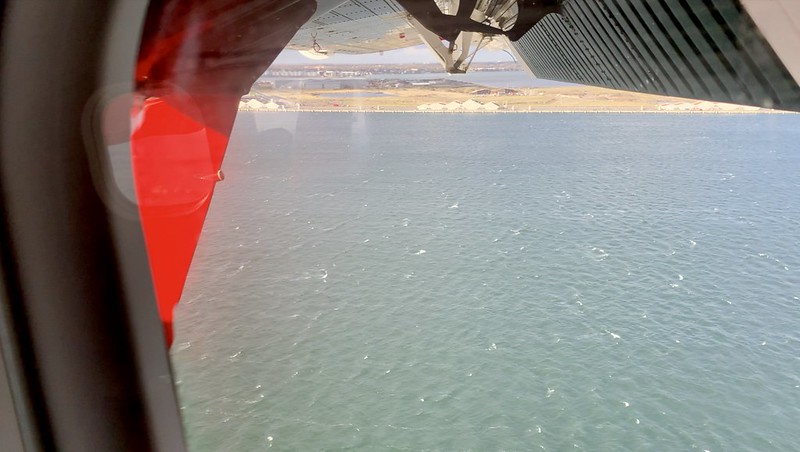 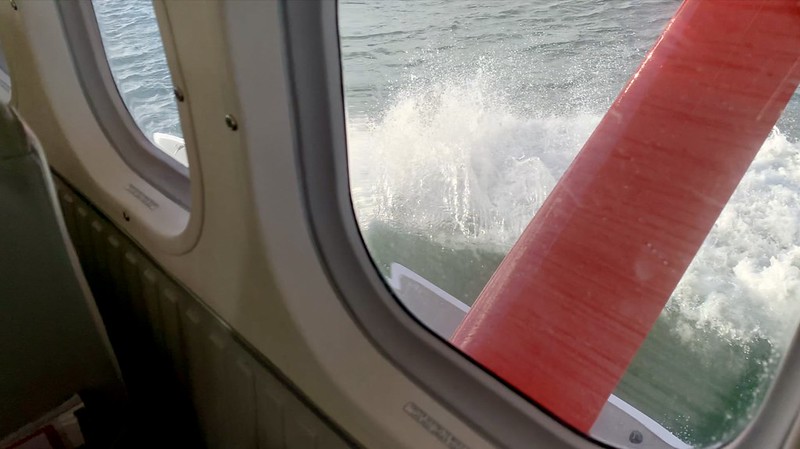 All in all this was a great and unique experience and I would recommend it to any and every avgeek. As I looked into seaplane flights around the world, there are certainly a couple of places where they are in service. The Maldives are quite known for seaplane transportation, there seem to be several companies in Canada and New Zealand as well that do operate seaplane flight. I wonder however if any of them have the same business model as Nordic Seaplanes, where it focuses on business travellers between big cities. I should add that Nordic Seaplanes does offer several sightseeing options and it is also possible to charter the plane.

If you liked the report, feel free to check my video report as well (link below). To be honest, if you did, that would help me a lot as I am at the beginning of my journey as an aviation videographer. However, I do see that everyone seems to be begging for clicking on their videos these days, so it's cool with me if you don't, cause sometimes I don't feel like that either, lol

Brilliant report! Great in you for indulging yourself on something so memorable. Loved the part about arriving right by the Little Mermaid, I once stayed at a hotel very close by. I wasn’t aware of this service at all but reading about it has given me ideas about a possible trip to Denmark next year. I just have to convince my wife that’s it’s a good idea and shan’t mention the cost yet!! Last month I flew on an Islander operated by Skybus from Lands End (LEQ) to the Scilly Isles (ISC) off the far southwestern part of Britain. Flight time of 15 minutes and with an altitude of 300 metres the views were sensational.
Top

GrandSlam wrote:
Brilliant report! Great in you for indulging yourself on something so memorable. Loved the part about arriving right by the Little Mermaid, I once stayed at a hotel very close by. I wasn’t aware of this service at all but reading about it has given me ideas about a possible trip to Denmark next year. I just have to convince my wife that’s it’s a good idea and shan’t mention the cost yet!! Last month I flew on an Islander operated by Skybus from Lands End (LEQ) to the Scilly Isles (ISC) off the far southwestern part of Britain. Flight time of 15 minutes and with an altitude of 300 metres the views were sensational.

Thank you! This service is indeed quite unique. I did not manage to find any other regular seaplane flights in Europe. I did look up your flight though, sounds like something to put on a bucket list if one's into scenic, or not ordinary flights. Might even end up trying it. Thanks
Top

I’d like to try that sometime. Thanks for sharing.
Top

They Also offers many special tours like sightseeing.
And then this one
https://www.seaplanes.dk/special-flyvni ... lsled-kro/
Top

Was in Copenhagen a few weeks ago and saw this airplane and was wondering what it was doing I had suspected scenic flights. Thansk for the report
Top

Quite an interesting flight in Europe and they are using the older model Twin Otter, not the new 400 series.
Top
Post Reply