Background: Wherever I go, I always like to try the local airline. I've been to Belgium three times, but until my flight today, I'd never had the chance to fly the Belgian flag carrier, Brussels Airlines. Brussels Airlines operates longhaul flights (mostly to Africa, as well as IAD, JFK and YYZ in North America) and a pretty extensive network of shorthaul flights throughout Europe. I was finally able to try Brussels Airlines for the first time, in this case on a shorthaul route, AGP-BRU.

Please enjoy this report on my Brussels Airlines A320 experience, and I look forward to your comments.

I easily found the Brussels Airlines check-in zone, a common check-in zone for all Lufthansa Group airlines, such as Lufthansa, Swiss, Austrian and Brussels Airlines. There was no line, so I approached the agent for an in-person check-in. I was provided a cardstock boarding pass sadly devoid of Brussels Airlines branding, having only the logos of Lufthansa, Swiss and Austrian. In fact "Brussels Airlines" wasn't even printed a single time. Above my name, though, was "Bizz&Class" branding, pretty much the worst Business Class branding I've seen, chosen to follow the Brussels Airlines theme of "Something&Something" for everything they offer: "Bizz&Class" for Business Class, "Flex&Fast" Economy which includes priority services and seating, "Light&Relax" Economy for regular seating and a checked bag, and "Check&Go" Economy, the unbundled option including hand baggage only.

I was checked in and through security, both of which had no line, by 17:15. My gate had not yet been announced, except that it would be in the 'D' area of gates. I headed for the VIP lounge. There appeared to be one lounge for the airport, serving all airlines plus Priority Pass. Brussels Airlines Business Class granted me access. It was a large lounge, nice and spacious, with some hot foods on offer. I enjoyed approximately an hour in the lounge before departing for an attempt at seeing my Brussels Airlines A320 arrive. It was projected to arrive on schedule. 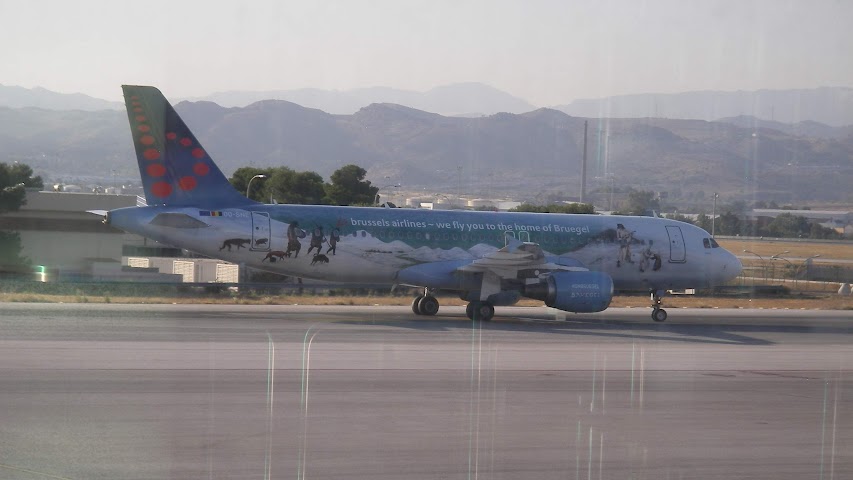 Pulling into the gate: 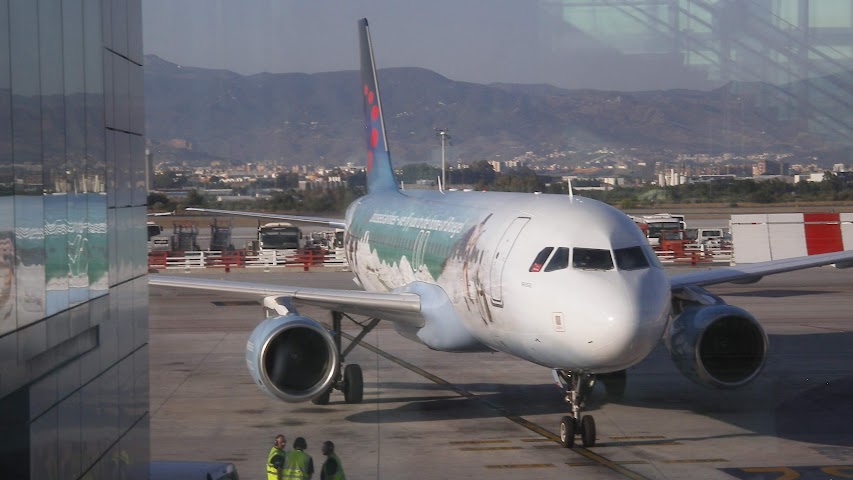 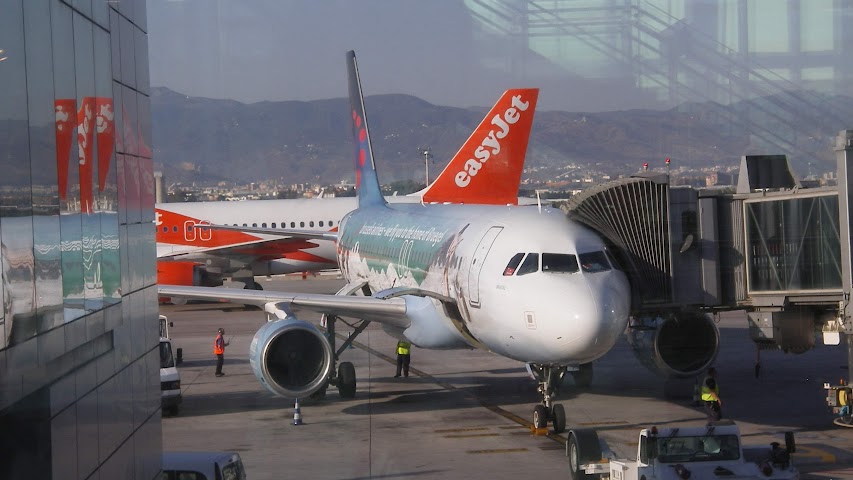 I was thankful to have priority boarding today, because by the time I'd watched my plane arrive to the gate, almost the entire planeload of people seemed to already be in one really long line. Boarding was through the jetbridge. I was among the first onboard my waiting plane. At booking, I'd received 1A, normally my favorite seat, but when it comes to what is essentially an Economy seat, I'm always a little skeptical of the bulkhead, as legroom can sometimes be very limited. At online check-in, looking to change to a non-bulkhead, I was surprised to find only the bulkhead available for Business Class, meaning the load for J will be very light tonight. Now onboard, "Bizz&Class" was indeed only the front row, behind which was "Flex&Fast" Economy priority seating. The curtain was aft of row 4. 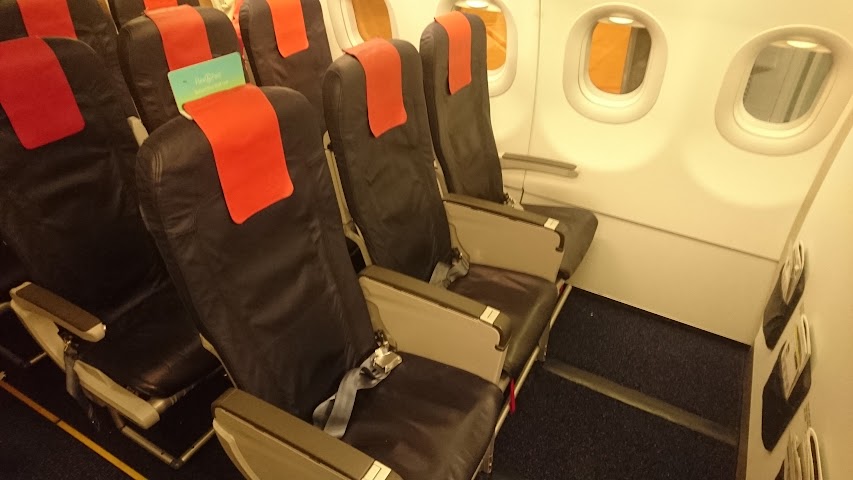 I was happy to find very good bulkhead legroom, more than two windows' worth of space. As usual, European Business Class is simply Economy seats with the middle kept free. With this good space, though, it'll be a comfortable flight to Brussels! I noticed that the 1ABC bulkhead seats had better legroom than the 1DEF side. A sign said "Welcome on board Bruegel", the name of my special "Belgian icons" livery plane. "an ode to one of the most talented artists of the sixteenth century" - the overhead bins are all covered in art.

Welcome on board Bruegel! 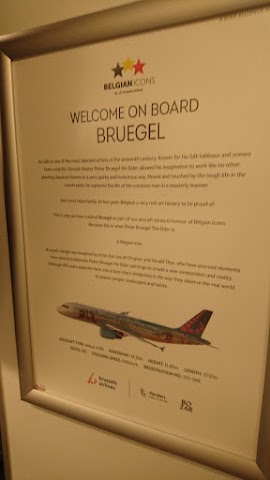 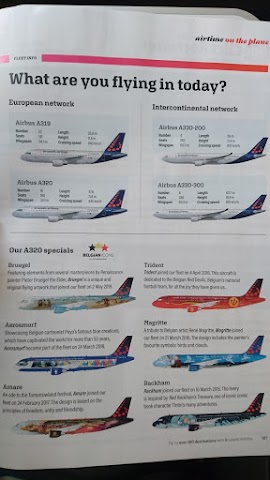 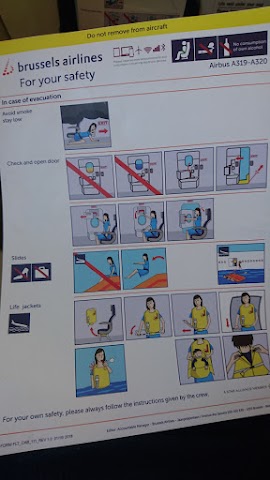 Settling in, I was looking through the buy on board "Shop&Eat" menu, which said that hot meals would be available on flights over 2h30. My scheduled 2h40 flight should have them. I was not sure what to expect as far as Business Class meal service. Automated announcements during boarding were only in English, but the flight attendant was welcoming passengers onboard in French and Dutch......Flemish. Boarding completed with a load of 4/4 in Business Class, 1AC & 1DF.

The purser's message, in English, French and Dutch, welcomed us onboard our A320, the Bruegel, and advised a 2h25 flight time to Brussels. I was already enjoying all the languages onboard. The captain welcomed us onboard this A320. He repeated the 2h25 flight time, and advised nice weather in Brussels, just under 30 degrees C. Following his welcome, the door was closed. The purser provided bottled water to Business Class and then offered newspapers. Unexpected overhead screens deployed from the ceiling to play a very cute safety video with cartoon birds - only in English. It would turn out that the screens were used only for the safety video, no inflight entertainment.

Pushback was at 20:51. After an incoming Ryanair B737-800, a departing Aer Lingus A321, an incoming Easyjet A320, a departing Blue Air B737-300 classic, an incoming Finnair A321, and another incoming Ryanair B737-800, it was finally our turn to utilize Runway 13. "Cabin crew: seats for departure." We turned onto the runway as I saw Ryanair turning off. Behind us in line were a Norwegian B737-800 and a British Airways A320. 1A made for an enjoyable wait, seeing all the different airlines. Our take off was at 21:10, and was quite a typical A320 takeoff, which seemed to use a lot of the runway.

Just prior to the seatbelt sign being switched off, the flight attendant presented hot towels. Meals were very quickly served. My hot dinner was a chicken and rice dish, with a bread roll, Business Class fruit mix, some sort of mini custard tort, and a small box of Neuhaus Belgian chocolates. I requested a beer, without specifying one in particular, and I was quickly served a Jupiler Belgian Pils the favorite Pils of Belgians - De Favoriete Pils van de Belgen - La Pils préférée des Belges - served in a nice Brussels Airlines logo glass. I was glad I hadn't specified a beer, because only Stella Artois and Leffe Blond were listed in the menu, so Jupiler was a bonus third offering. I noticed the people behind me in "Flex&Fast" got a cold meal box with what appeared to be a wrap, complimentary drinks in plastic cups, and the opportunity to pre-order hot items from the menu. 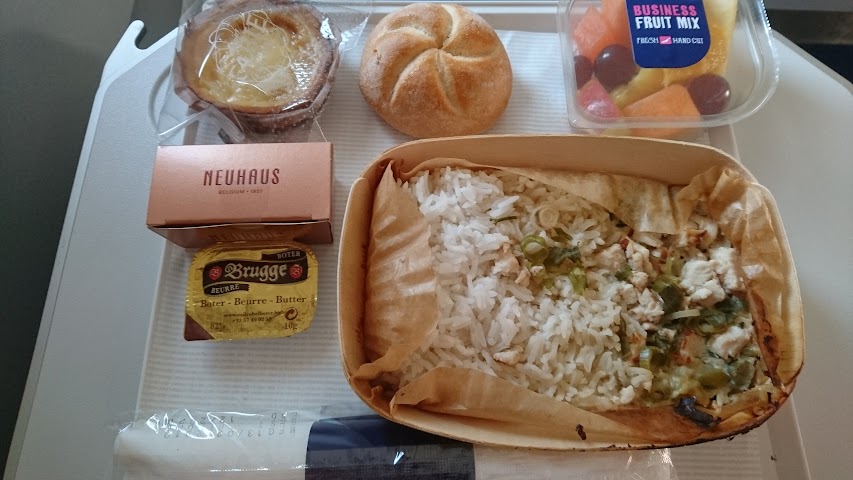 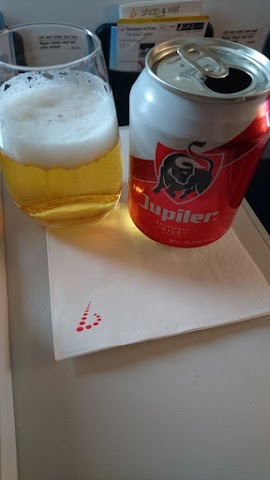 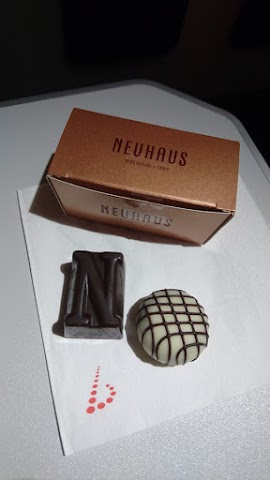 The meal was actually very good. The chicken and rice was very good, the custard tort was also good, and of course the Belgian chocolates were delicious. I was quite full after dinner service, but not too full to miss the opportunity to ask the purser about certain Belgian menu items from the buy on board menu - namely the other two Belgian beers, Stella Artois and Leffe Blond, and the two Belgian specialities, Frites and the Belgian waffle. Of course all were available, so I asked if I could try all of them throughout the rest of the flight. I not only love trying different local airlines, but I also try to maximize the onboard experience. It can't get any better than flying Brussels Airlines in Business Class and trying all the Belgian offerings.

The frites were soon done cooking and brought out from the rear galley, but the purser intercepted them and served them on a tray he had prepared, rather than simply handing me the box. Warm oven-baked golden fries. A Belgian favourite enjoyed best with mayonnaise, ketchup or samurai dipping sauce - Yes French fries were actually invented in Belgium (the land of surrealism), where they're known as frieten or Frites and are generally served with mayonnaise. As I had hoped, they were very good! There should be no doubt that Brussels Airlines would serve proper frites, and I can now confirm that they do. My beer was Stella Artois, Over 600 years of Belgian Brewing expertise, brought to life in a beautifully balanced Lager. With a flavourful taste and a clean finish, Stella Artois is meant to be savoured - A classic Belgian Lager, one of the best-selling beers in the world known for its pleasantly bitter taste. With a little under 1.5h to go, I was expecting the waffle and final beer a little closer to landing. 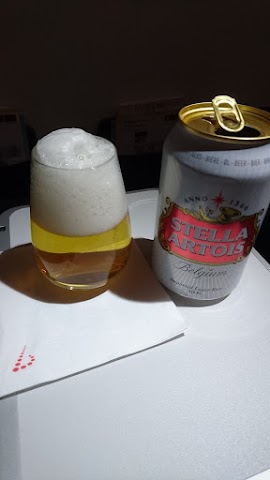 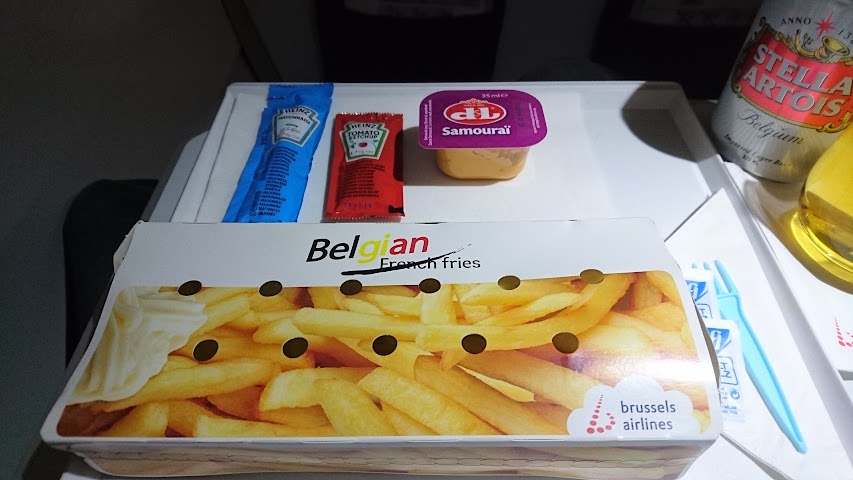 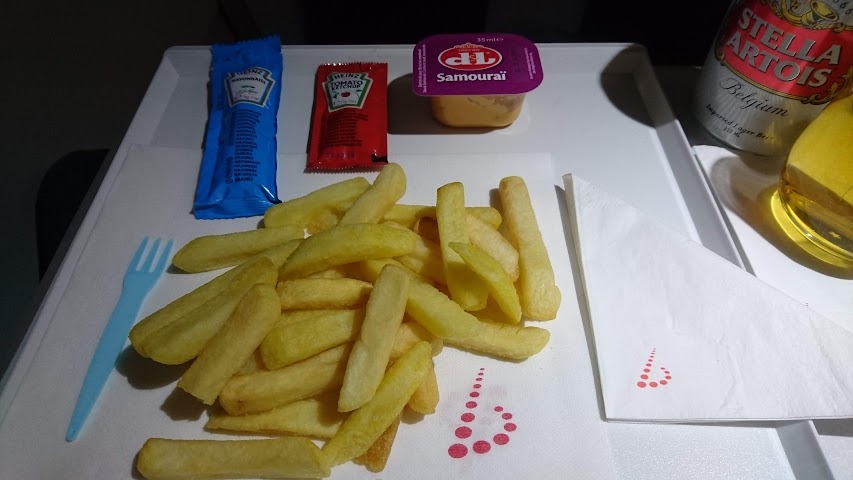 I was relaxing when I started smelling the waffle being heated. It was soon served, and it smelled incredible. First taste - it tastes great, too. And the third and final beer, Leffe Blond, an authentic Belgian abbey beer with a slight hint of bitterness to it. Leffe is much closer to what I expect from a Belgian beer than the two pils I had earlier. A perfect end to an excellent flight. 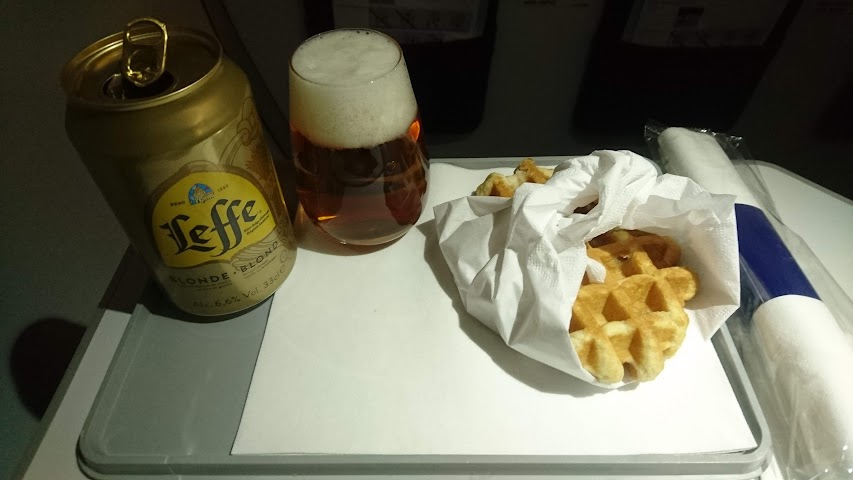 With about 30 minutes left, the flight was almost done. Even over 1,000 miles and this flight is still too short. I've had a lot of great flights lately, and they're all too short. It's really true that the best flights go by too quickly.

The captain announced that we'd begun descent, and expect to land in 20 to 25 minutes maximum. The weather in Brussels was 23 C. "I hope you've enjoyed your flight with us, and hope you have a nice evening in Brussels." This was followed by the cabin prep announcement.

Almost there, still some light in the night sky, past 23:00 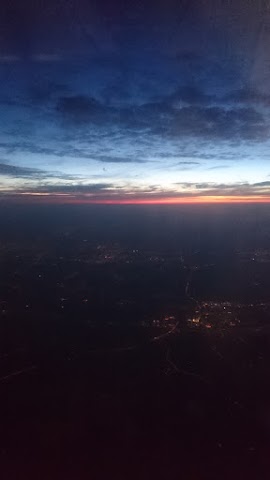 As the flight attendant cleared the remaining service items, I complimented him on his belt, the buckle of which had the Brussels Airlines logo! It reminded me of the China Airlines purser's 747-400 tie clip, on my CI 747 flight last fall.

Landing was at 23:27 with heavy braking. We got to our gate in Terminal A at 23:30 - another jet bridge gate. The checked bags were delayed, and did not arrive for a full hour after gate arrival.

Having visited Brussels three times I was overdue to fly Brussels Airlines, and now I've flown their shorthaul service, leaving their longhaul service hopefully for next time. I was very happy with Brussels Airlines. It was a great flight, trying all the foods and beers. I really liked the Belgian offerings, and the pride of the Belgian purser and flight attendant in their country and airline, hearing the French and Dutch, all in all a very nice experience. I was glad I got to try them on this flight, just long enough for hot foods, and at a good price, too. And last but not least, a roomy, comfortable seat 1A.

I really recommend flying the airline of your destination. For one, it's something different. There's nothing wrong with your familiar everyday airline, but it's nice to get the unique local touches on the local airline. It adds something extra to your trip, something special instead of being a routine normal flight.

I was really glad I got on Brussels Airlines, and even better, they exceeded expectations in every way! The rumor is now that Lufthansa Group will be keeping Brussels Airlines in operation, and not merging them into Eurowings. I think this is a good decision. I'm glad I was able to fly them shorthaul, and I hope I can try longhaul soon, too.

FYI: Stella Artois and Jupiler are pilseners I believe. Leffe is a blonde beer. Belgian beer isn't "one thing and taste" , Blondes, Triples, Quadrupples, Doubles, Brown, White, Pilseners, Amber, Kriek...Hundreds of variantions, so no such thing as "the belgian beer". It's the belgian beer culture.
Top

Nice report. Brussels Airlines looks better than I expected, but obviously isn’t on the same level as other European carriers when it comes to short haul J.

I’m curious; as a Business Class passenger, were you able to pick and choose from the BOB menu for free, or did you have to pay for the extra food?
Top

In Business Class, they provided all the BOB menu items for free.
Top
Post Reply