Something a little different for this trip report; a comparison of two competing carriers in the German domestic market - Lufthansa and EasyJet. As ever, the report is copied in its entirety below, but additional photographs are available via this link: https://www.portcullismagazine.com/post ... n-domestic

Introduction:
When one thinks of domestic travel in Germany, it is only natural for the mind to drift towards the Deutsche Bahn and the high-speed ICE, which reaches speeds of up to 186 mph. Despite such impressive speeds, a journey from Stuttgart to Berlin still takes an average of six hours, while a journey from Munich to Berlin (traversing the newly-inaugurated, purpose-built high-speed line) takes around four. Moreover, German railways stations tend to be...unpleasant to say the least.

Unsurprisingly, then, there is much demand for domestic flights. The collapse of Air Berlin in late 2017 left a large void in the market which was filled by Lufthansa Group and EasyJet. The former operate mainline services from Frankfurt and Munich to airports across Germany, while non-hub routes are flown by Eurowings, Lufthansa's low-cost daughter airline. British airline EasyJet, meanwhile, has become a major player in virtually no time at all, having quickly established a hub at Berlin Tegel Airport and taken on a number of aircraft from Air Berlin in the wake of their collapse. As a general rule, all three airlines operate domestic flights with A320-series aircraft, although Lufthansa has notably deployed both the Boeing 747 and Airbus A340 on multiple occasions. This review will compare Lufthansa and EasyJet in order to determine which one offers the best value for money and passenger experience. 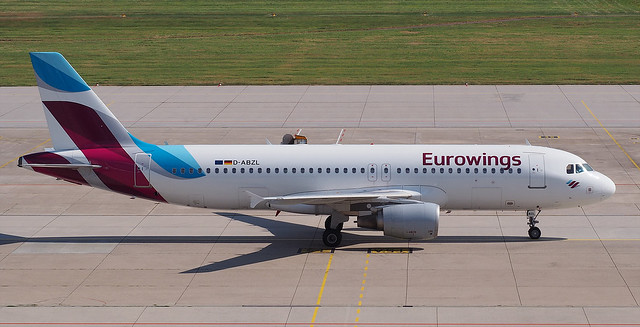 Routing and Price:
My flight with Lufthansa was from Munich to Berlin, and my flight with EasyJet was from Berlin to Stuttgart. While not the same route, the distances and service levels involved are comparable. Both flights were booked 12 days in advance, and I selected the cheapest fares available. For Lufthansa, this was the "Economy Light" fare, which cost €90. For EasyJet, this was the "Standard Fare", which came in at €77. Neither fare included seat selection or hold baggage and entitled me simply to a seat and one cabin bag, making both fares very attractive prospects for business travellers making a day trip to the capital. While both airlines encourage passengers to print out their boarding passes prior to travel, EasyJet does not offer the option to print them at the airport. 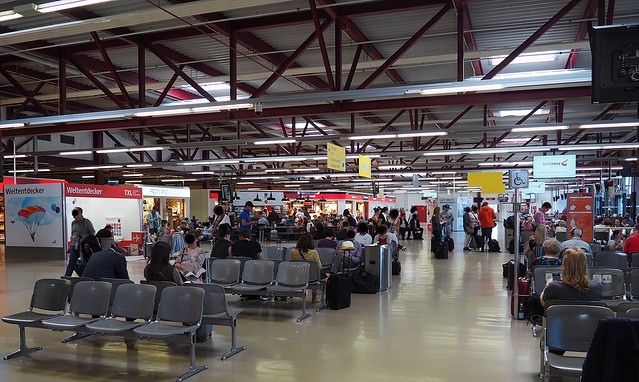 Above: No matter which airline you choose, there is no avoiding the fact that Berlin Tegel Airport is a dump.

Cabin Comfort:
Lufthansa offers a seat pitch of 30-inches, compared with 29-inches aboard EasyJet. While both airlines have installed slimline seating in their short-haul cabins and the difference in pitch is only one inch, the EasyJet cabin does feel noticeably more cramped. This isn't a huge problem for a flight of one hour, but it is something to consider nonetheless.

In-Flight Service:
Lufthansa is markedly superior in this category. Even the cheapest economy fare entitles a passenger to a free drink (alcoholic or non-alcoholic) and a small snack, which is the perfect service offering for a flight of such a short length. Aboard EasyJet, meanwhile, all snacks and beverages are buy-on-board (BOB). During my flight, I enjoyed a Rekorderlig Strawberry and Lime Cider, which is priced at 4.50GBP/€6 - quite expensive for a 330ml can.

Flight Attendants onboard both of my flights were friendly, but, subjective as it is, I would conclude that the Lufthansa crew was warmer and more eager to assist with requests than the EasyJet crew. It is also worth noting here that EasyJet is a British airline, and only one member of the crew aboard my flight was a native German speaker. One more seemed to have a basic grasp of the language (certainly sufficient to sell drinks and snacks), but the third FA was unable to speak a word of German. That didn't detract from my experience, as I am a native English speaker, but it could be problematic for German passengers who either do not speak English or do not have confidence speaking English. Lufthansa crews, meanwhile, are generally competent in both languages. 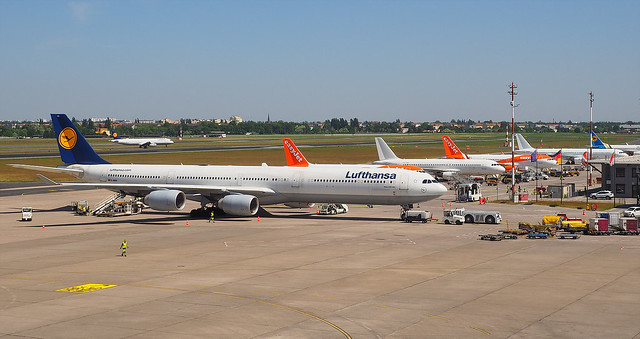 Above: Time to come clean, I actually flew on an Airbus A340, not a plain old A320, with Lufthansa.

Conclusion:
Both airlines offer solid and friendly service, but based on my experience Lufthansa is the better of the two. The onboard service was a more polished and personal than EasyJet, while the inclusion of free drinks and snacks on such a short flight was a very welcome addition. In terms of price, the two were quite comparable, but it is important to note that EasyJet does often offer much cheaper fares if one were to book further in advance than I did. Both products are pitched at the business traveller and are very well-suited thereto, providing very attractive competition to the Deutsche Bahn. EasyJet deserves some extra credit for being the plucky Brit taking on the German behemoth in its own backyard, providing much-needed competition and doing quite well in the process. While I have judged Lufthansa to be the better of the two, I certainly would not hesitate to choose EasyJet again if the price and schedule were right.
Top

At least in HAM you can ask easyjet for a reprint of the boarding pass without any problems. Despite being low-cost, I like the fact that you can check-in at the airport free of charge, unlike other airlines like FR.
Top

Nice report! An A340 on short haul is a rare treat!
Top
Post Reply