With four of my sister's friends studying abroad in Europe at the same time, we thought it was the perfect excuse to cross another European city off our list. So last March we found a relatively cheap itinerary on British Airways and booked directly through their website. (We learned our lesson about booking through a travel site: viewtopic.php?f=4&t=1406663&p).
Eight uneventful months passed between then and our flight, and as we entered our documentation online nothing seemed to be an issue. All the excitement was saved for the day of the flight, it turns out.

Travel day!
After the 2-hour drive from Baltimore County, we arrived at Dulles at about 3:30pm. It was still light out so I was looking forward to doing some spotting. After a long trip to the terminal on the bus, we arrive at the check-in counter excited and ready to go.
On scanning our passports, the agent called over her supervisor and they had a muffled conversation. It turns out my sister's passport expires in just over two months. Not an issue, right? There's an expiration date for a reason. Well, it turns out Denmark requires a passport to be valid for three months after the flight in order to enter the country. Who knew? (Most people but us, apparently.) We were told we could not fly to Copenhagen tonight. My sister was heartbroken, of course, as she had been looking forward to seeing her friends for the last 8 months. We took our bags to a bench to review our options.

Since it was a Saturday evening, we had no shot at calling the State Department. Waiting until Monday seemed like our most realistic option if we still wanted to go to Copenhagen. However, a second but slightly riskier option was also available.
While the laws of Denmark would not allow us to travel there within three months of the expiration date of the passport, we could still travel to the UK. We could go there and get a cheap hotel, and either visit the US Embassy there or call the State Department first thing Monday morning then proceed to Copenhagen eventually. We liked this option, as my sister had never visited London before. With the clock ticking until the scheduled departure of our flight to London, we headed back to the counter with our plan.
The British Airways staff at Dulles was very helpful and it was clear they were rooting for us to make it to Copenhagen somehow. After an apparent struggle against the management software on the computer, the agent was able to rebook us onto a Tuesday morning flight from London to Copenhagen for just a change fee. With ten minutes until boarding, we finally checked our bags to London and headed through security.

After a long trip from bag drop via the train, we arrived at the A-B gates and hustled to B44, where G-XLEA was awaiting us. 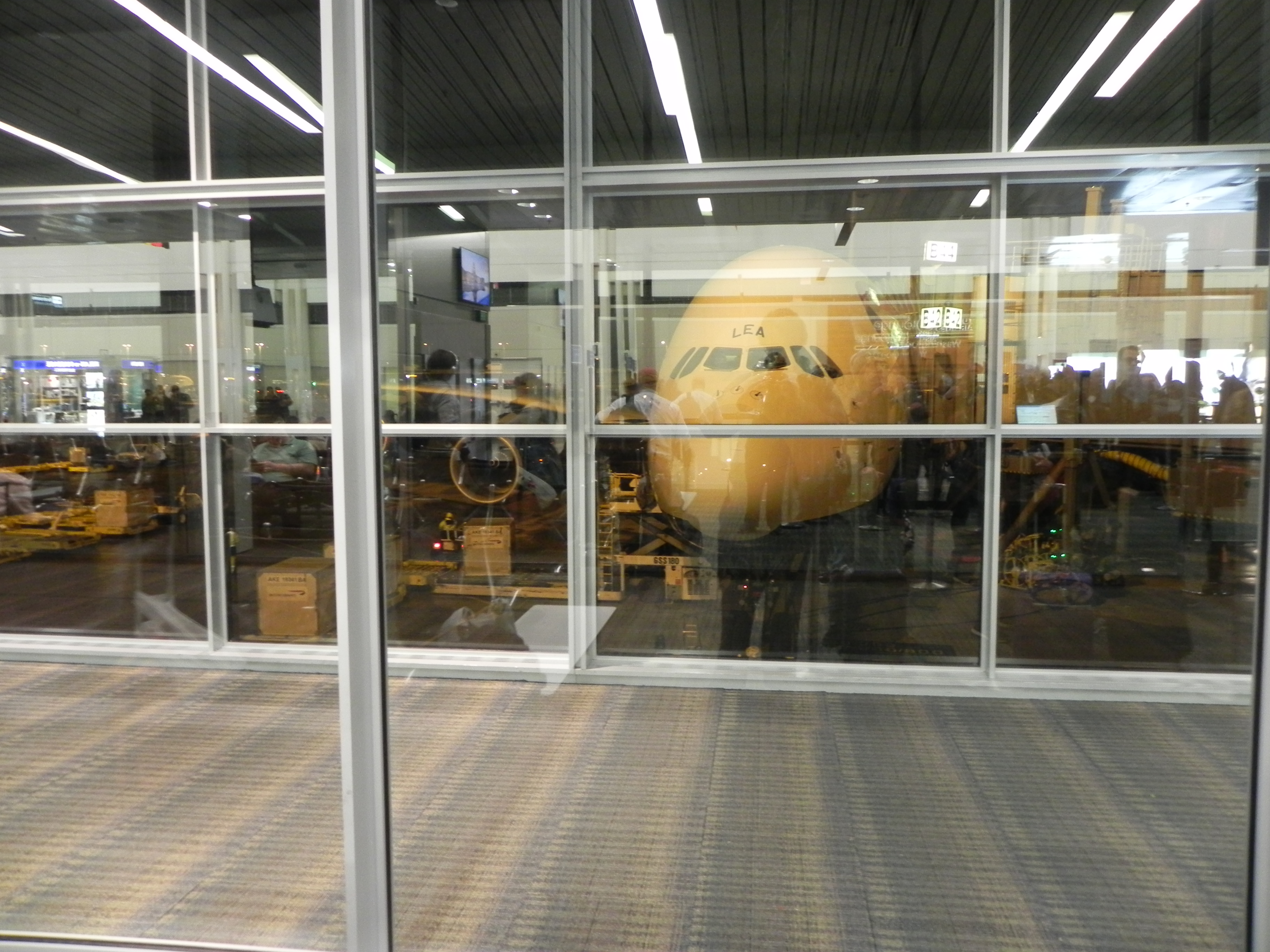 Here's a better view. You may remember her as British Airways' first A380:


We boarded through the B42 jetway and headed to row 26. After a slight delay at the gate for whatever reason, we pushed, taxied to runway 30, and blasted off for London. 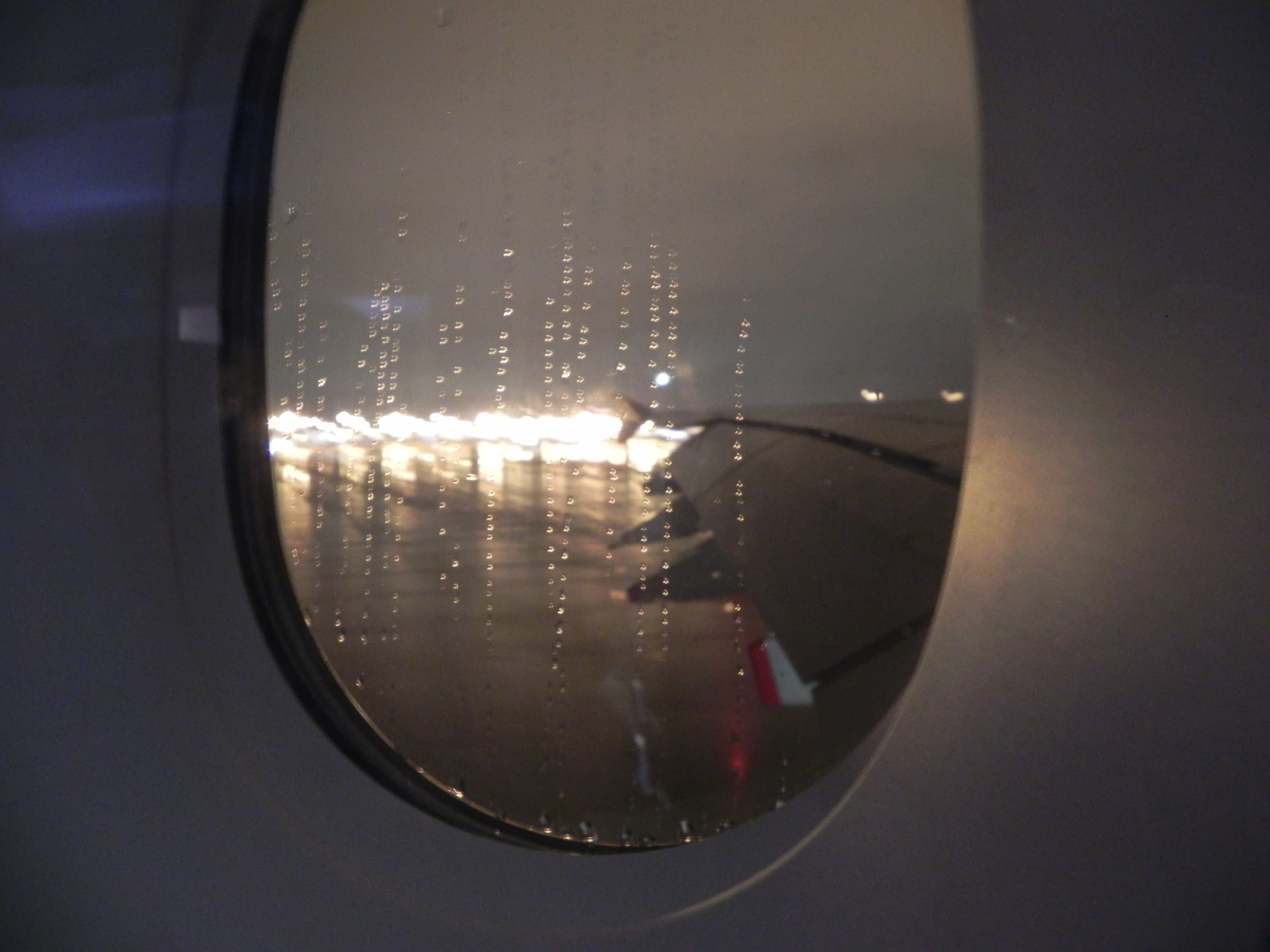 I don't know who designed the A380 windows but I'd like to speak with them.

Dinner options were a vegetarian pasta or chicken. I chose the pasta. I couldn't tell what the sauce was, but I think/hope it was a cheese sauce. It was quite good. 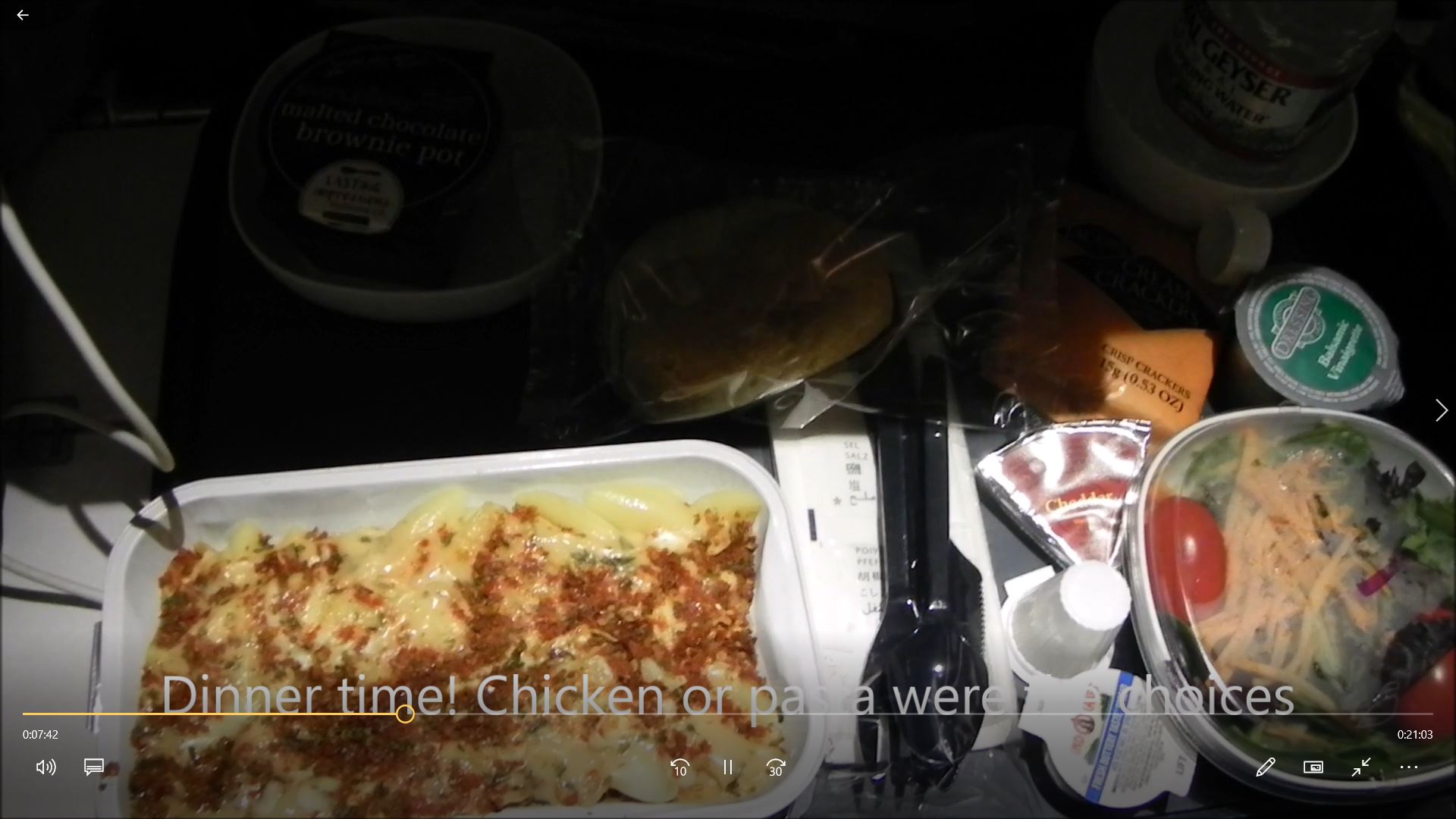 Uneventful flight through a dark autumn night over the ocean and we begin our descent into a misty Heathrow. 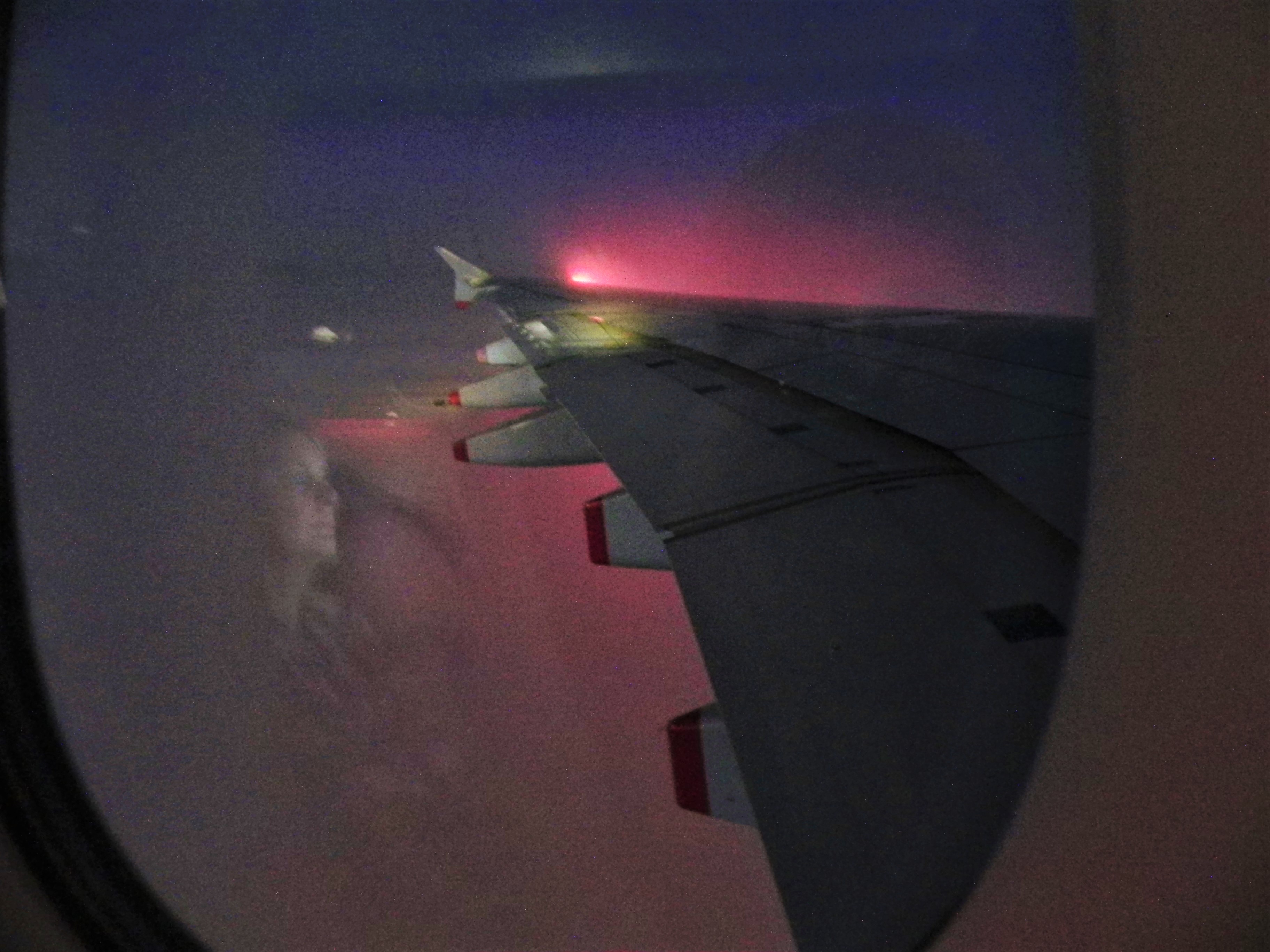 Smooth touchdown and rollout on 27L before dawn 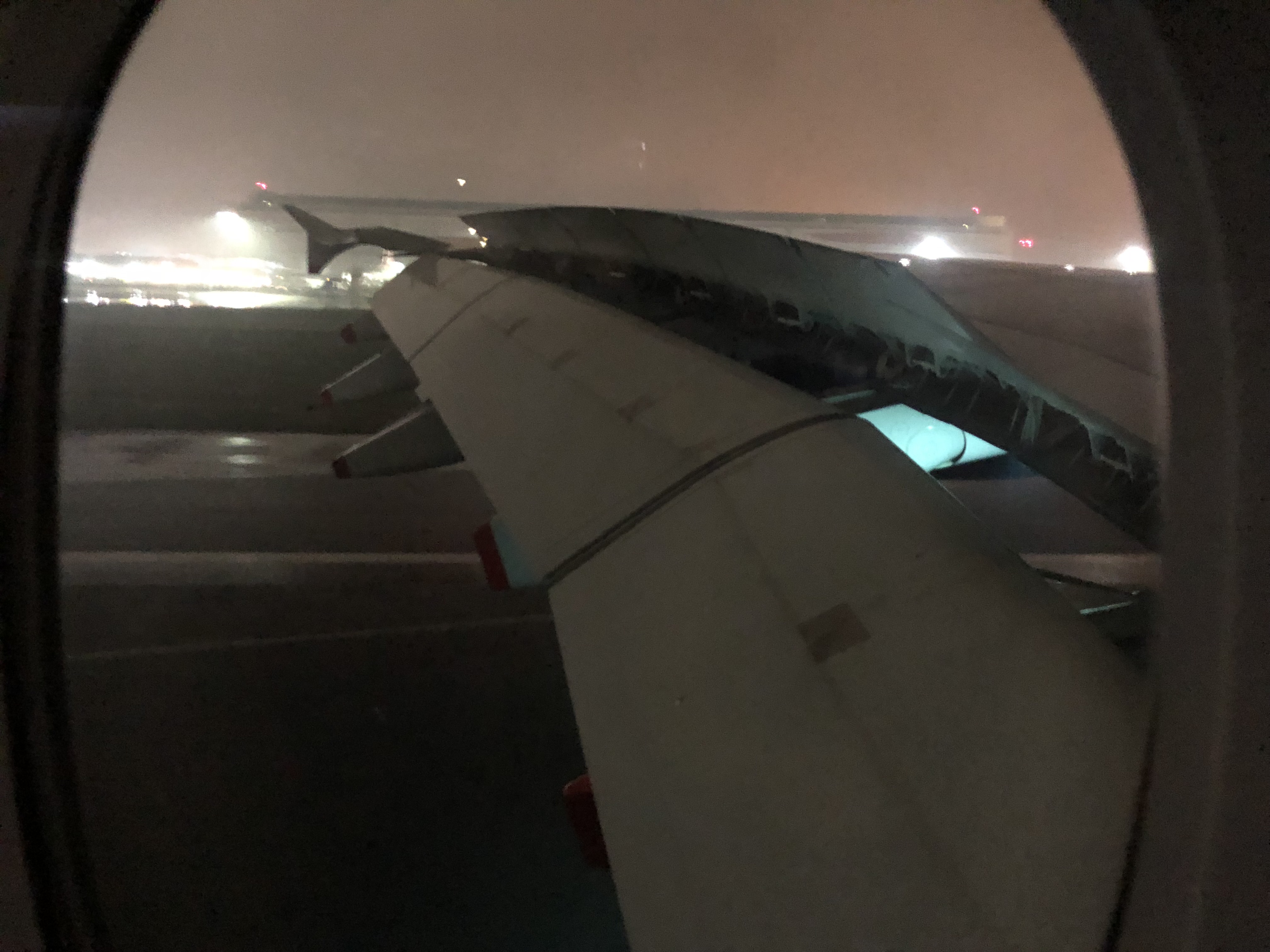 We cleared customs and immigration and booked a room at the Hilton Garden Inn near Terminals 2 and 3. At this point, we're still not sure if we're going to be able to go to Copenhagen at all, so this might turn into a London vacation.

Our room had a runway view, and now I'm the happiest person on the planet.
N858NW loading for the return to MSP 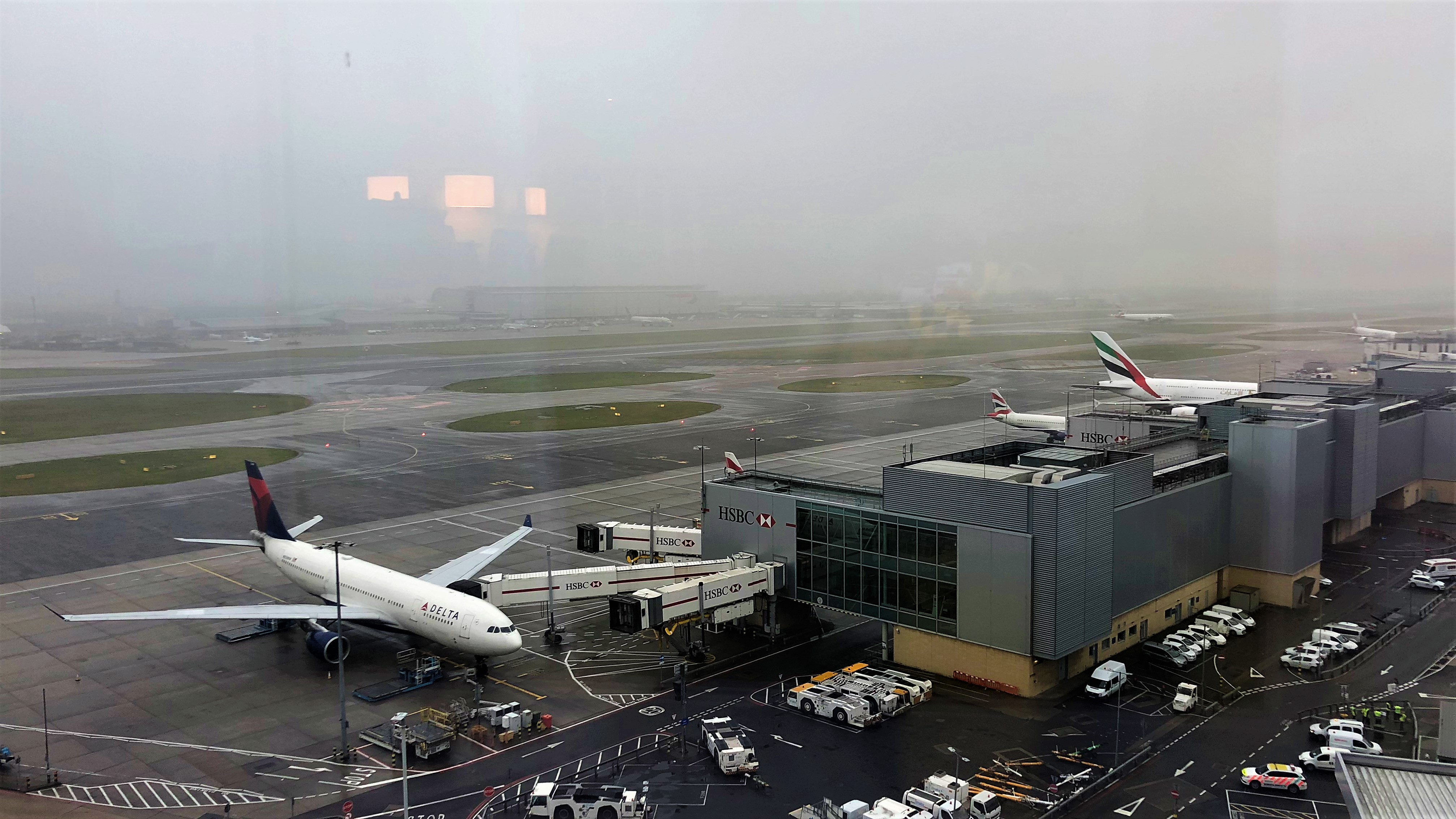 Downtown London. It's a great city, but we were too stressed and worried about the Embassy the next day to fully enjoy it. 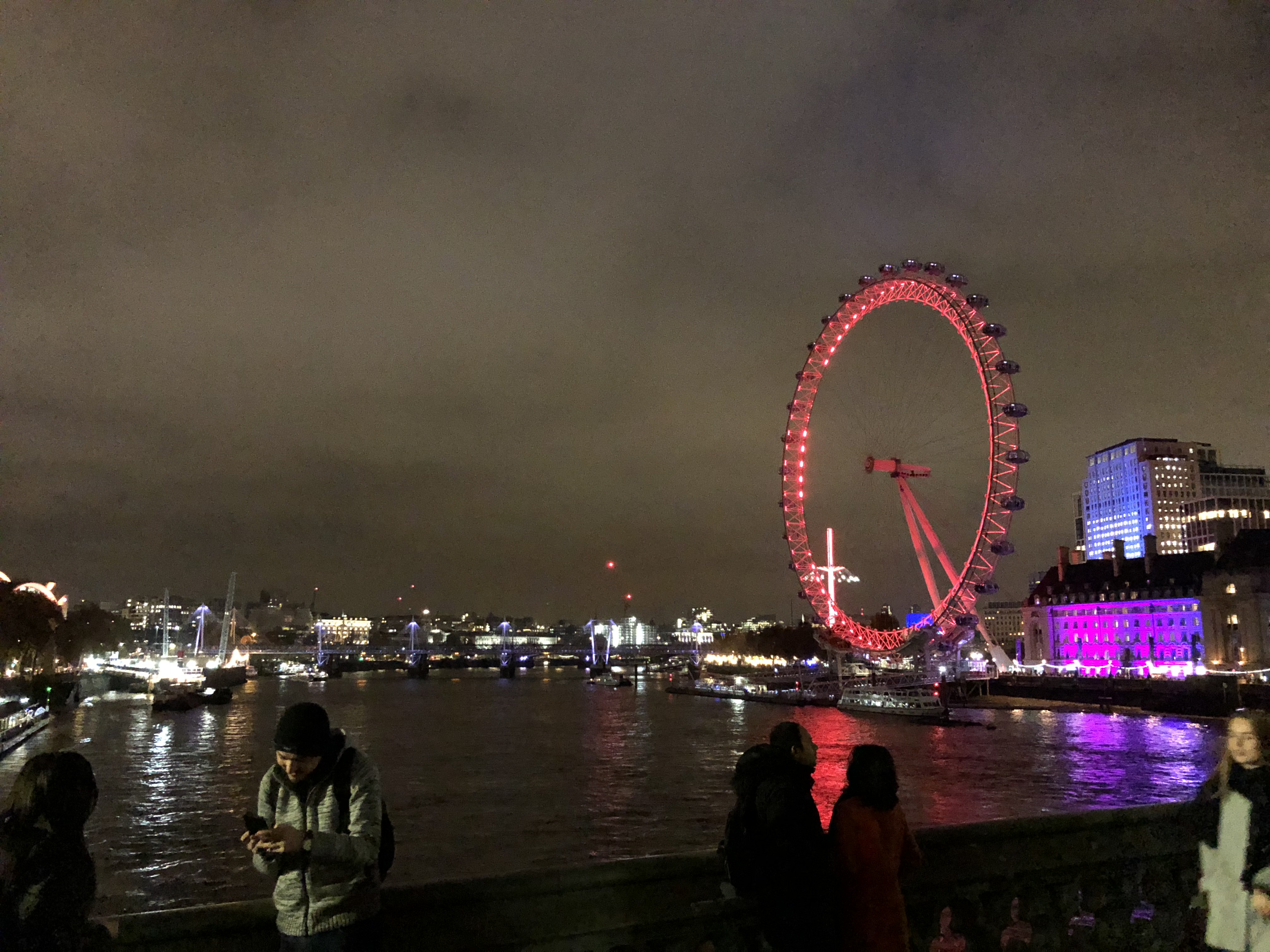 The O2, a very cool place 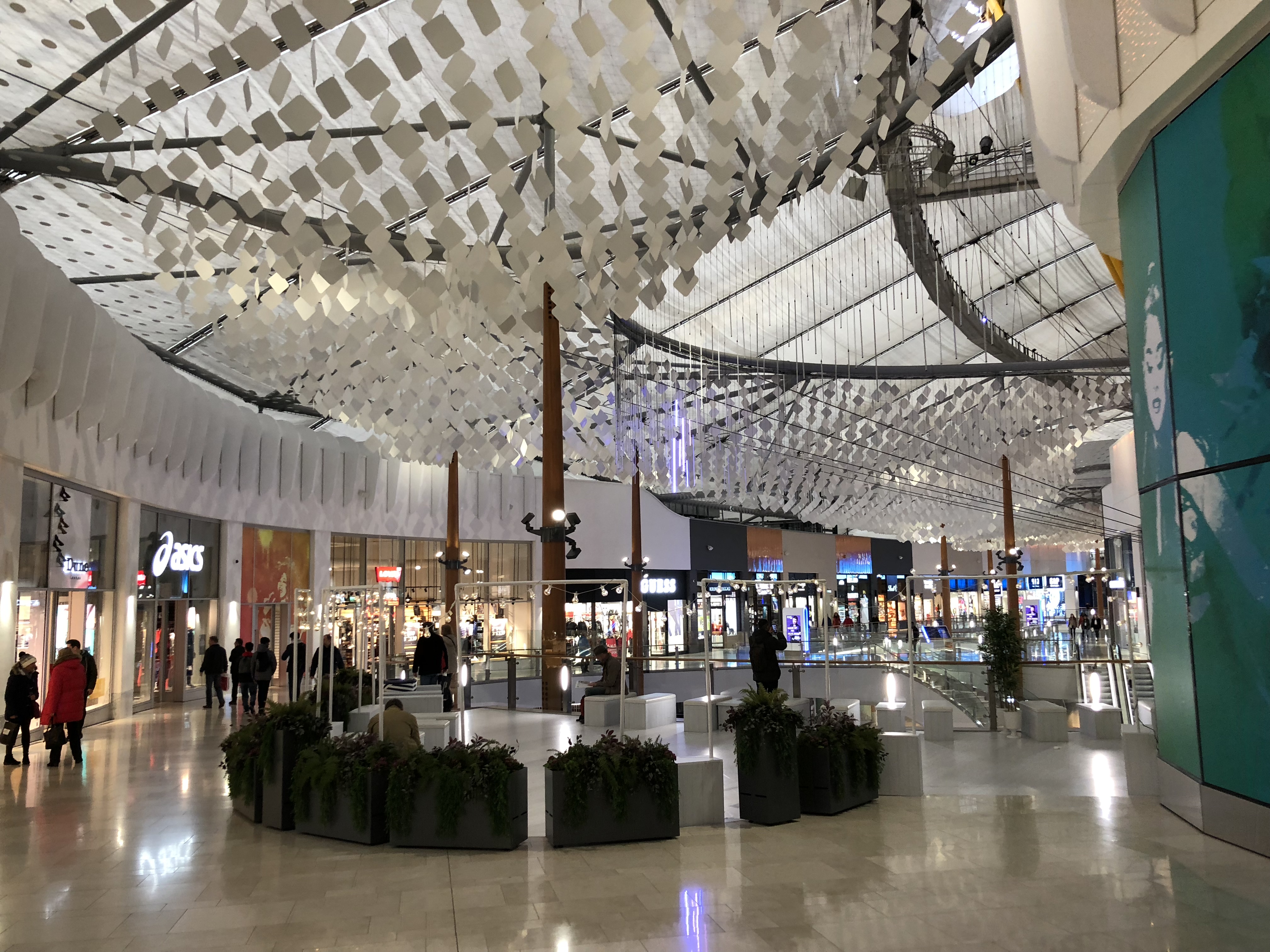 Good news, the Embassy was able to help us! She was issued an emergency passport and we're good to head to Copenhagen now. We enjoyed the rest of our day in London Monday before returning to our runway room and preparing for an early flight the next morning.
The most visible stand from our room was 301, which hosted a wide array of aircraft. In our two days, we saw the DL A332, a BA A320, a JL B788 and B77W, and finally this giant QF A380, VH-OQI. It was loading for QF2 to Singapore then on to Sydney. 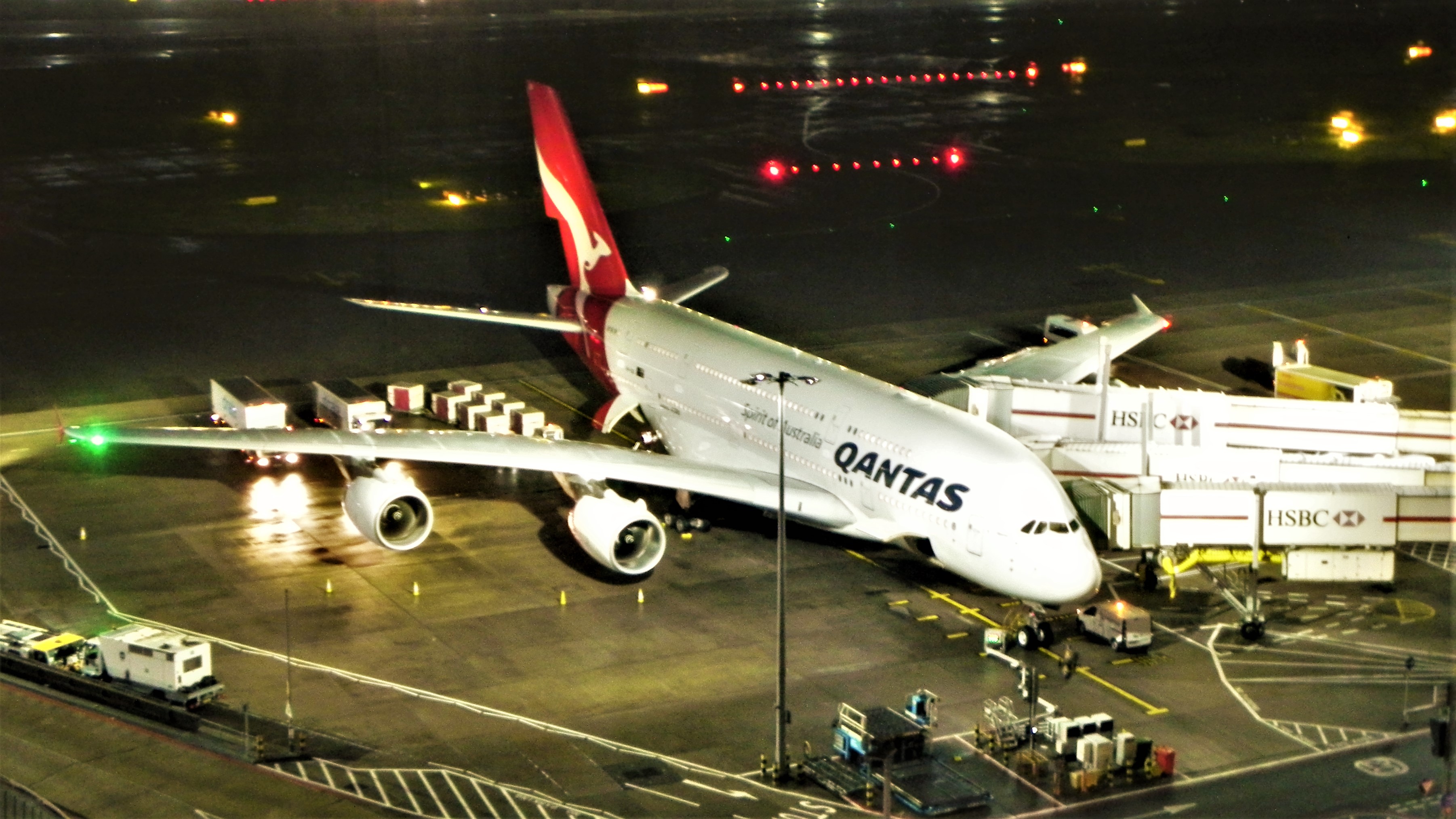 Before we knew it, it was time to wake up and head to Terminal 5. Normally, the Heathrow Express provides a free intra-terminal transfer, but that didn't start until 5:30am and it was 4am now. So we had a taxi take us.

When I checked Flightaware the day before the flight, there was no registration yet listed, but the equipment read "32N." I was cautiously very excited. Of course things can change and airlines largely treat A319/20/21/ceo/neo interchangeably, but for now I'm scheduled to fly on my first ever neo!


We boarded right on time and I took my seat in 21F. Long taxi to 27L and we're finally bound for Copenhagen. 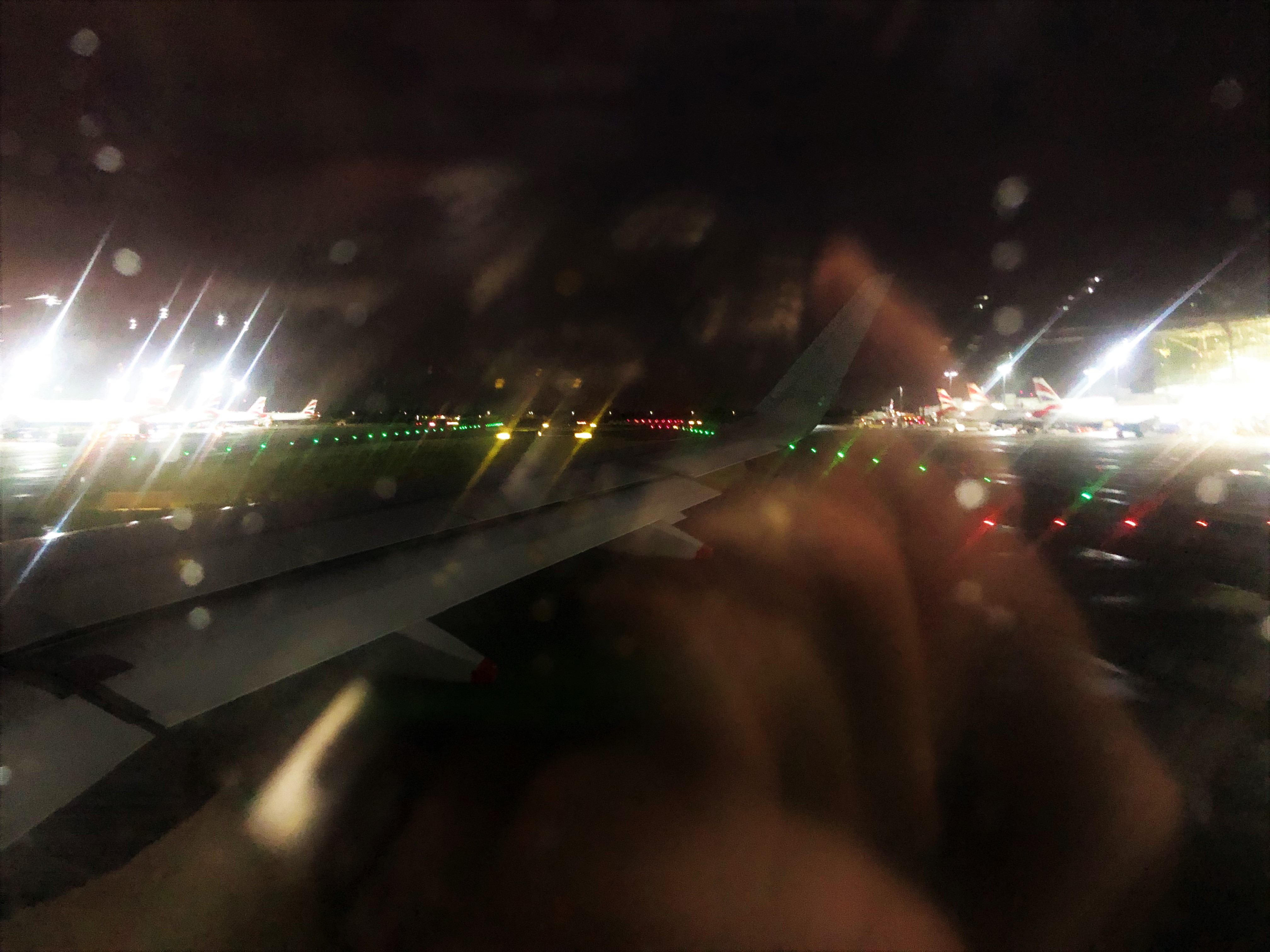 Dawn began to break almost immediately after takeoff. I was a bit surprised to see no wifi available and even non-alcoholic drinks had a price, but other than that it was a very quick 1 hour 21 minutes up to Denmark. 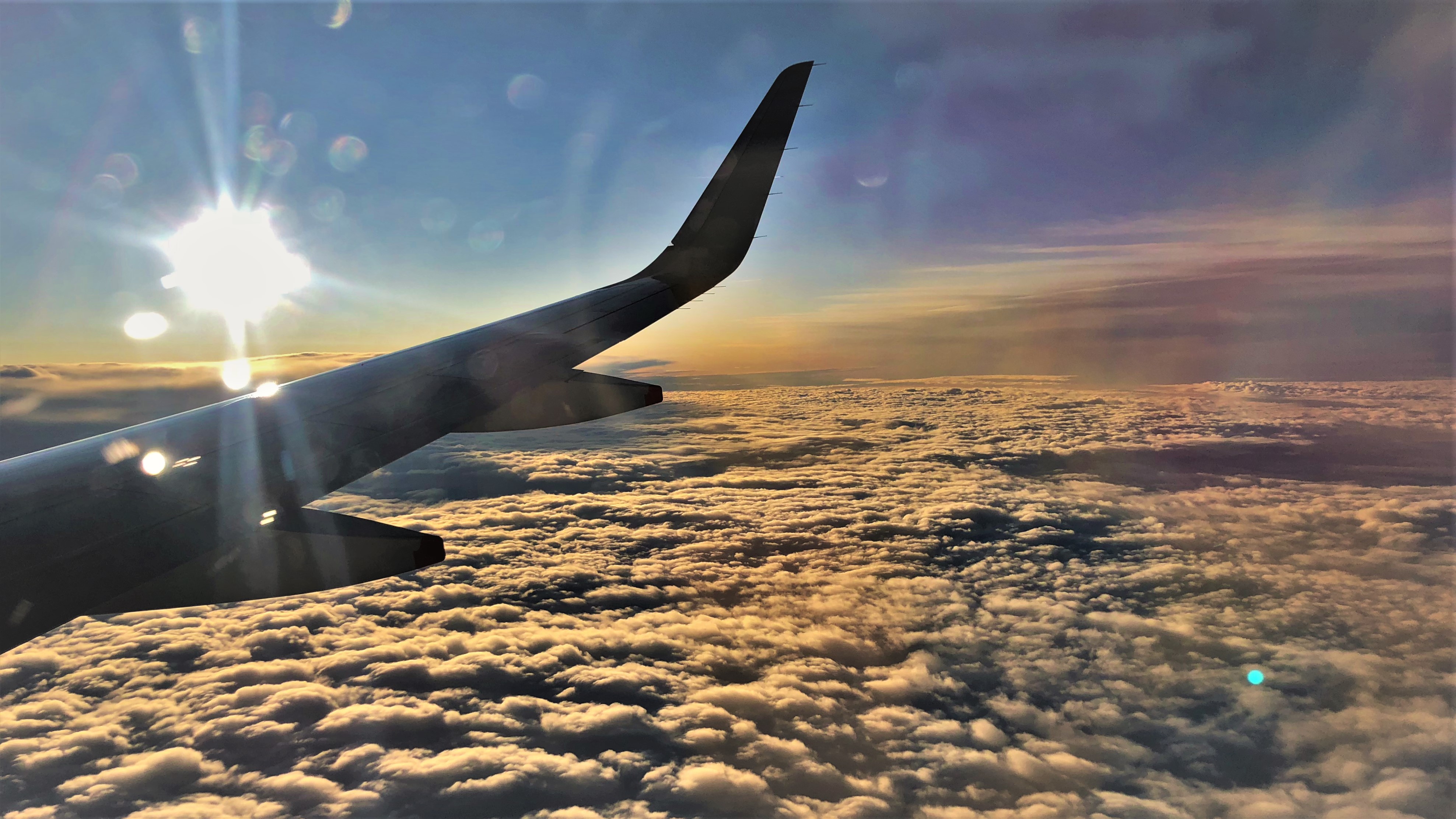 Descent into a very cloudy Copenhagen and arrival on runway 22L 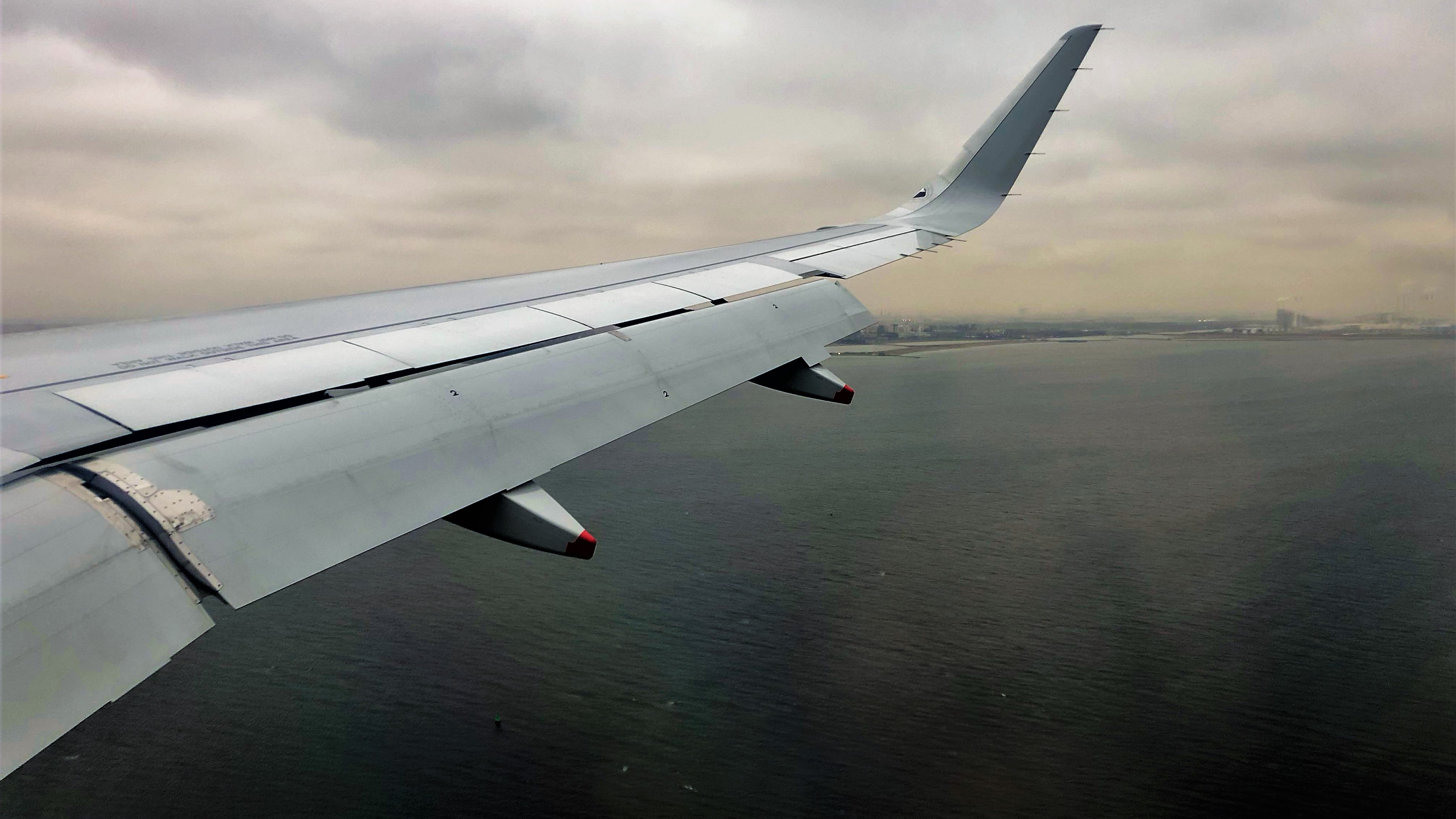 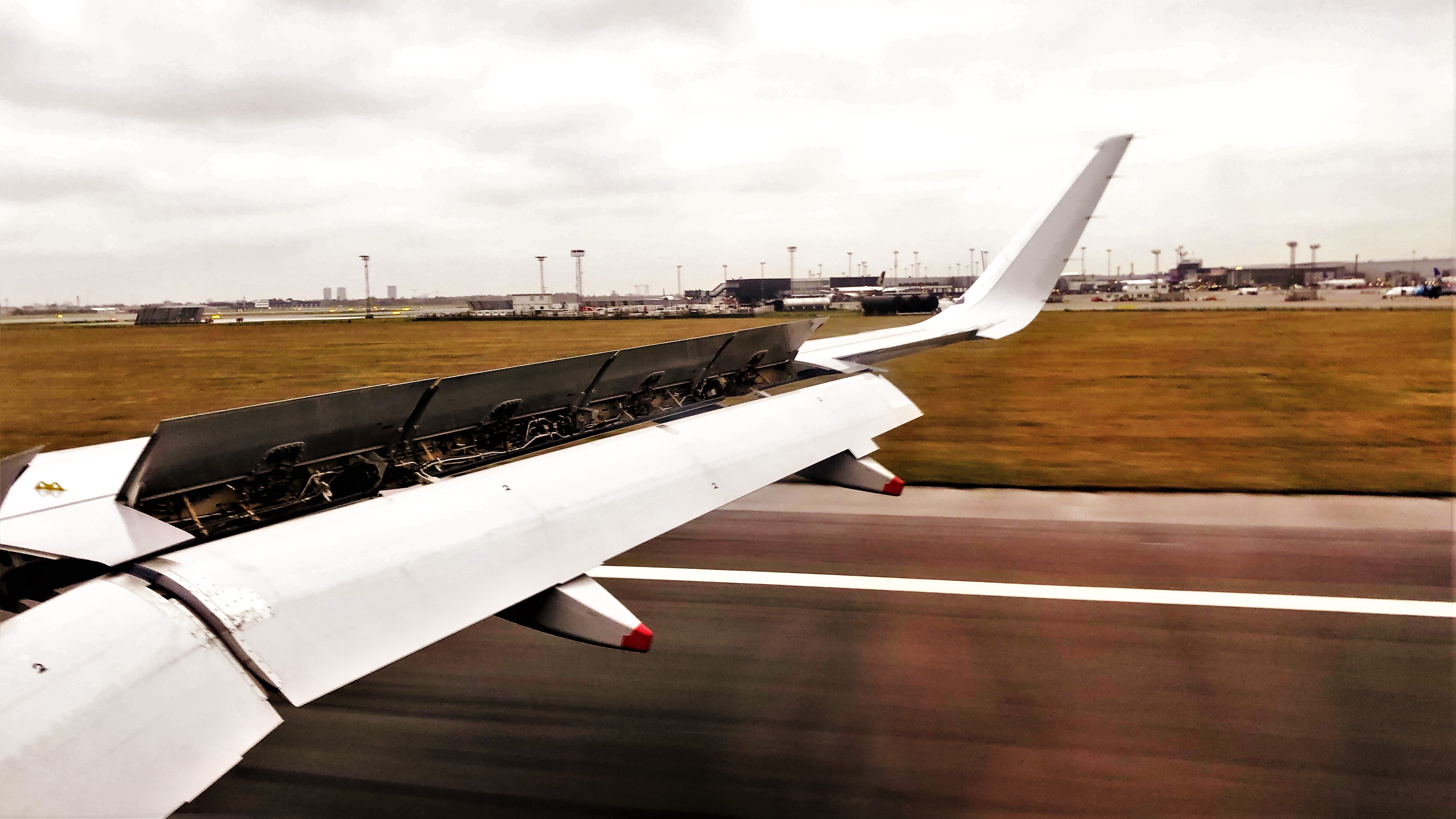 Quick taxi to gate C27. Uneventful, until we were told we could deplane through the L2 door at the back of the plane. I had never done this, so that was, of course, the new plan. As luck would have it, the two lines of passengers broke perfectly on our row and we headed out the back.
Greeting us was HS-TKX. It was massive. I had never been so close to an aircraft like this before. I could practically touch the wing. 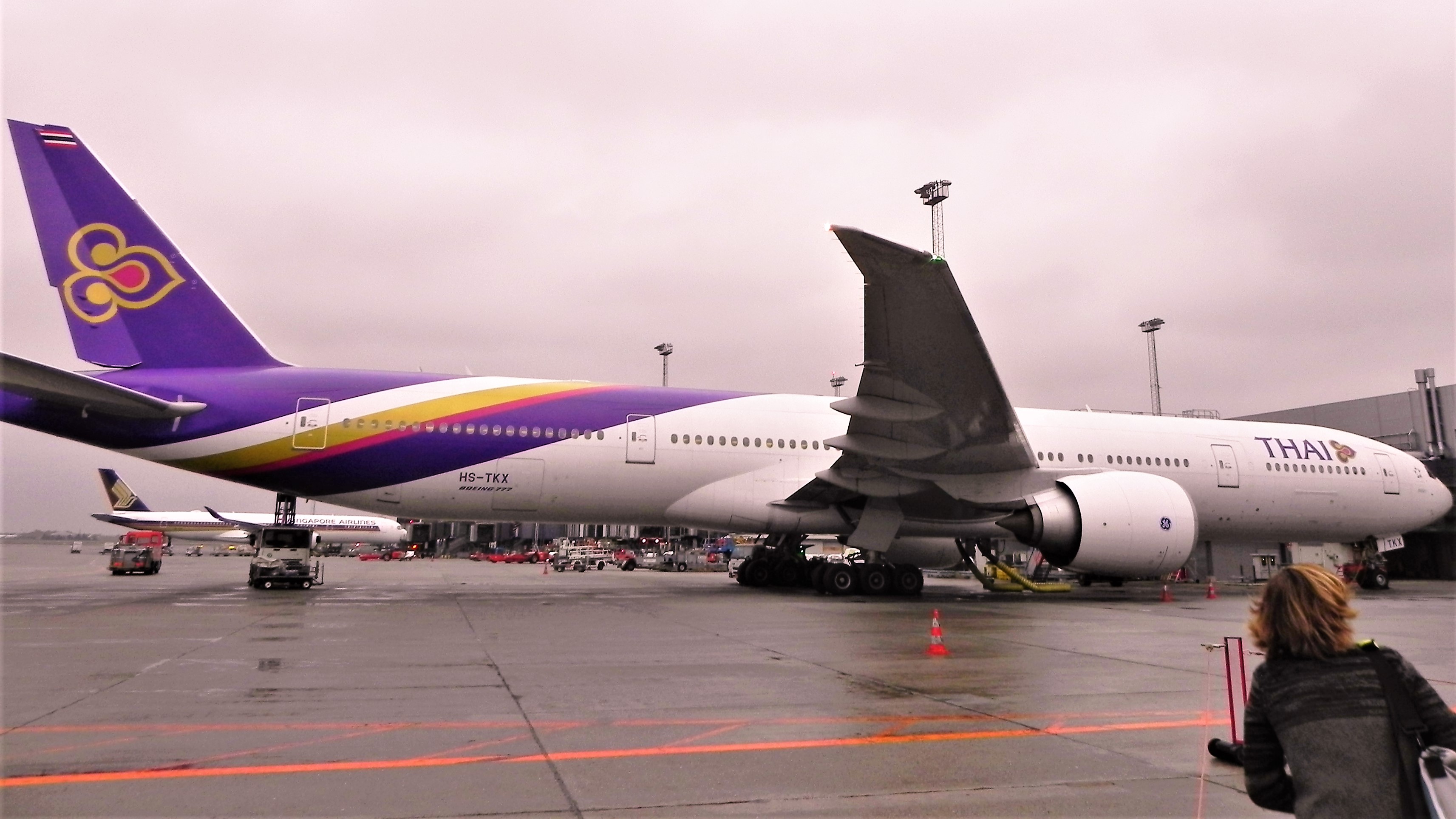 Thanks for following along! While this trip began in a very disappointing and uncertain manner, it turned into a very cool journey with a couple firsts for me.

Enjoyed this, thanks for sharing. Am glad you got your passport things sorted.
Top
Post Reply