Without airliners.net, I would never know the existence of Taos Air, which has been running winter seasonal flights between Taos, New Mexico, and Austin and Dallas, Texas since last year. On January 9, 2020, it has expanded its service to Hawthorne (Los Angeles) and Carlsbad (San Diego), California. Following the footsteps of boutique airlines like Jet Suite X, which is now known as JSX, Taos Air uses smaller regional jet, which has 30 and less seats for these scheduled charter flights. They operate in and out of private jet terminal and there is no TSA or baggage screening at all. It is really a cool concept. Taos Air is a virtual airline and Advanced Air is operating the flights for them this year. When I read the thread on airliners.net, I wasn’t sure about it at first and worried about the price, especially I checked it basically more or less a week before. When I saw that they provide fare for thru flights, (the only thru flights are Hawthorne to Dallas via Taos and San Diego to Austin via Taos), I jumped on it especially $190 is a really good fare. For comparison, my return fare is $170 on Alaska. Taos Air allows one free flight change up to 7 days prior to departure, two free bags (they don’t really check the weight), and complimentary snacks including ice cream on the flights to Texas, and non-alcoholic beverage, not to mention that you don’t need to deal with TSA and can check in as late as fifteen minutes prior to departure. The flight experience could not be any simpler; however, I have to caution those who needs to make a connection at Dallas or Austin. Unlike JSX, Taos Air/Advanced Air does not offer complimentary shuttle to the main terminal, and these private jet terminals are often at the other end of the airport, and required an Uber/Lyft or taxi. However, I still recommend any AV geeks to give it a try. It is a really affordable way to experience a private jet-type experience.

My Uber driver had no issue finding the Jet Center Los Angeles, and there are plenty of signs showing “Taos Air” too. Surf Air also uses the same terminal. There is a restaurant above the private jet terminal.

Interior is similar to most private jet terminals in the US. There is no formal check in desks, and there is a receptionist answer question. She informed me that the flight attendant, Kimberly, would check us in, when we got closer to departure time. There are those valet carts that you typically see in hotel, which you put your check in bags, as well as skis for obvious reasons. The Taos Tourism Board and all these ski resorts heavily subsidize this service. 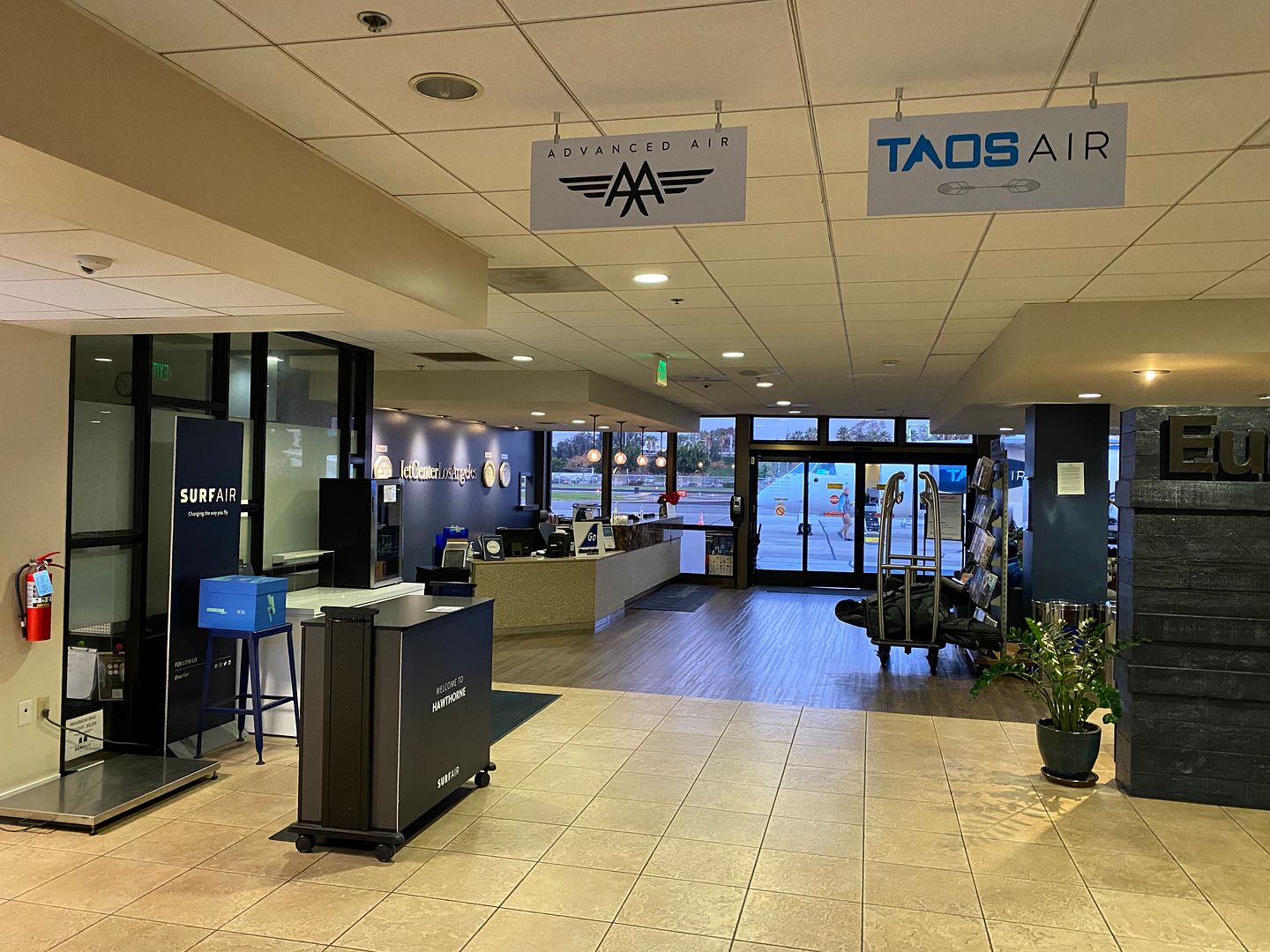 They have more drink selection and also cheese too. However, their aircraft don’t have galley, so it makes sense for this setup.

Another great thing about flying private jet is that you can nicely ask the agent, and s/he will let you go outside and snap pictures of the planes. The pilots and staffs will chat with you.

The morning sun is just perfect for photos this morning.

Kimberley showed up to check in eventually and she just verified your identity and the amount of baggage you are carrying. They do no weigh anything. However, you must use an official ID to verify your identity. There are no baggage tags. They just verify which bags do you want to check in and then they just loaded them onto the cargo hold.

Here is the boarding pass, but they recollect them as we board. I did not have one single piece of Taos Air’s boarding pass or baggage tag at all.

Boarding Procedure:
1. F/A checked your ID and name, and checked you in using her phone.
2. She handed you the boarding pass
3. Check in bags were taken away by ground staffs and loaded onto the plane.
4. Priority boarding for disabled passenger and they are very helpful, followed by families with young children, and the rest just followed the pilots out to the plane.
5. All open seating and Kimberley told us which section of the plane we should sit. She asked us to sit in the middle of the plane on the flight to Taos.
6. Kimberley collected the boarding pass and double-checked the passenger counts.

With only six passengers, boarding was quickly done.

We pushed back at 7:30am and took off at 7:33am for the hour and thirty-eight minutes flight to Taos.
Here is the flight information from flightaware: Just a beautiful day to fly! Passengers just moved around to take pictures. 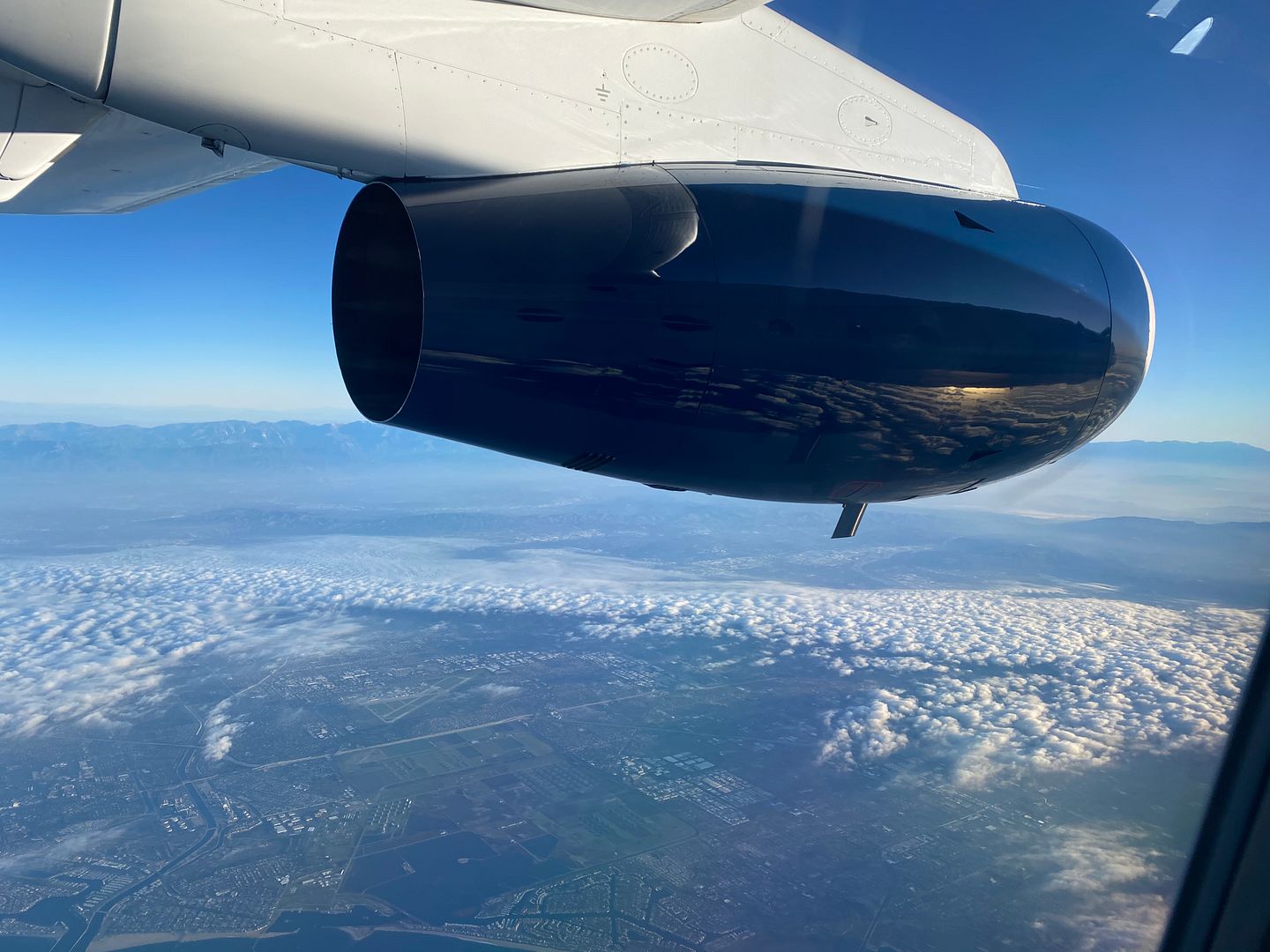 This Dornier 328-Jet has 30 seats arranged in a 1-2 [A – DF] arrangement. Exit rows are 1DF (no extra legroom though) and 10A, which is the best seat in the house. They are all upholstered in this cream color leather.

Legroom is not particularly generous but is okay enough given everyone has at least two seats to themselves.

8F – where I stayed for both flights 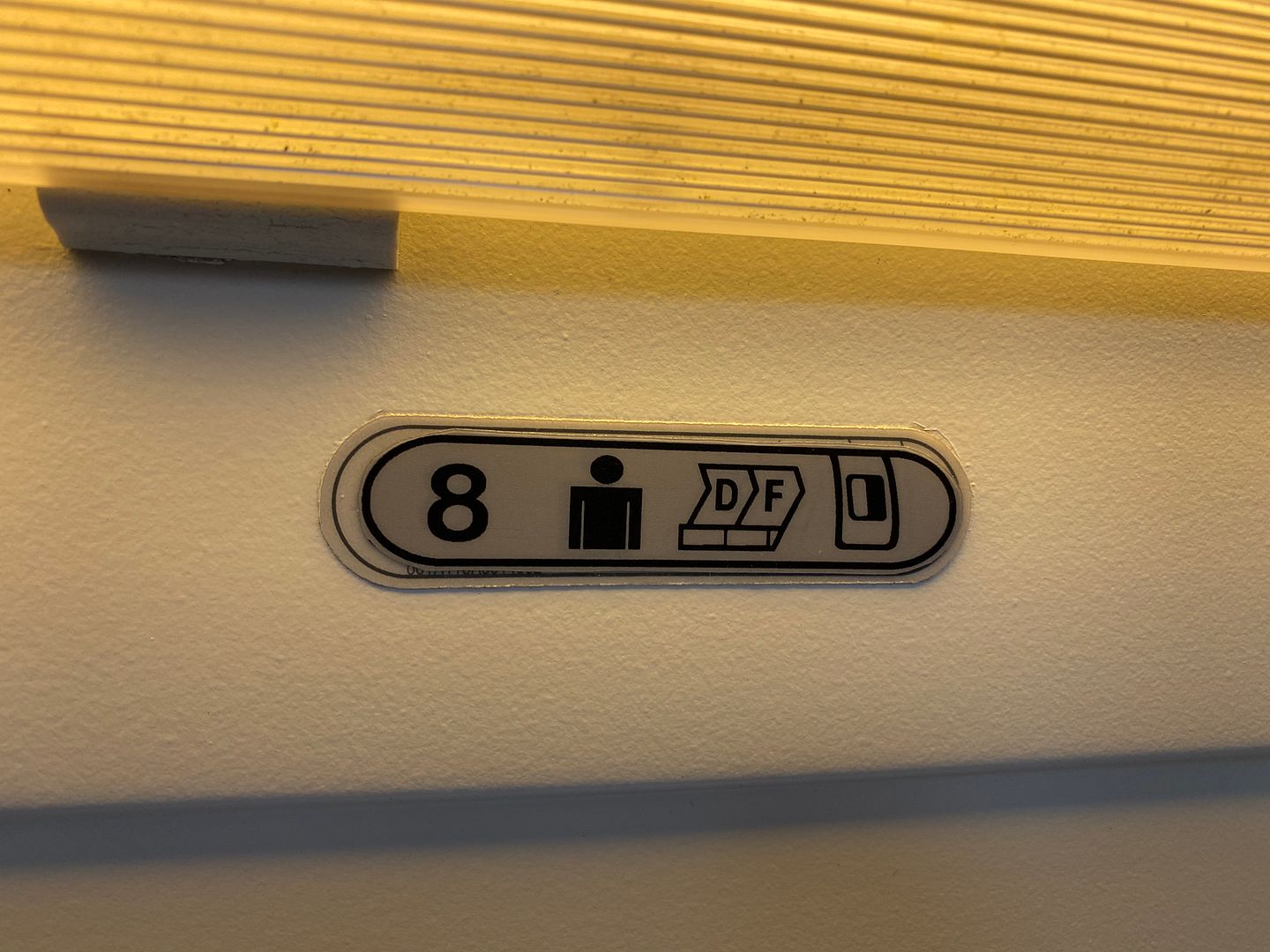 10A is the best seat in the house 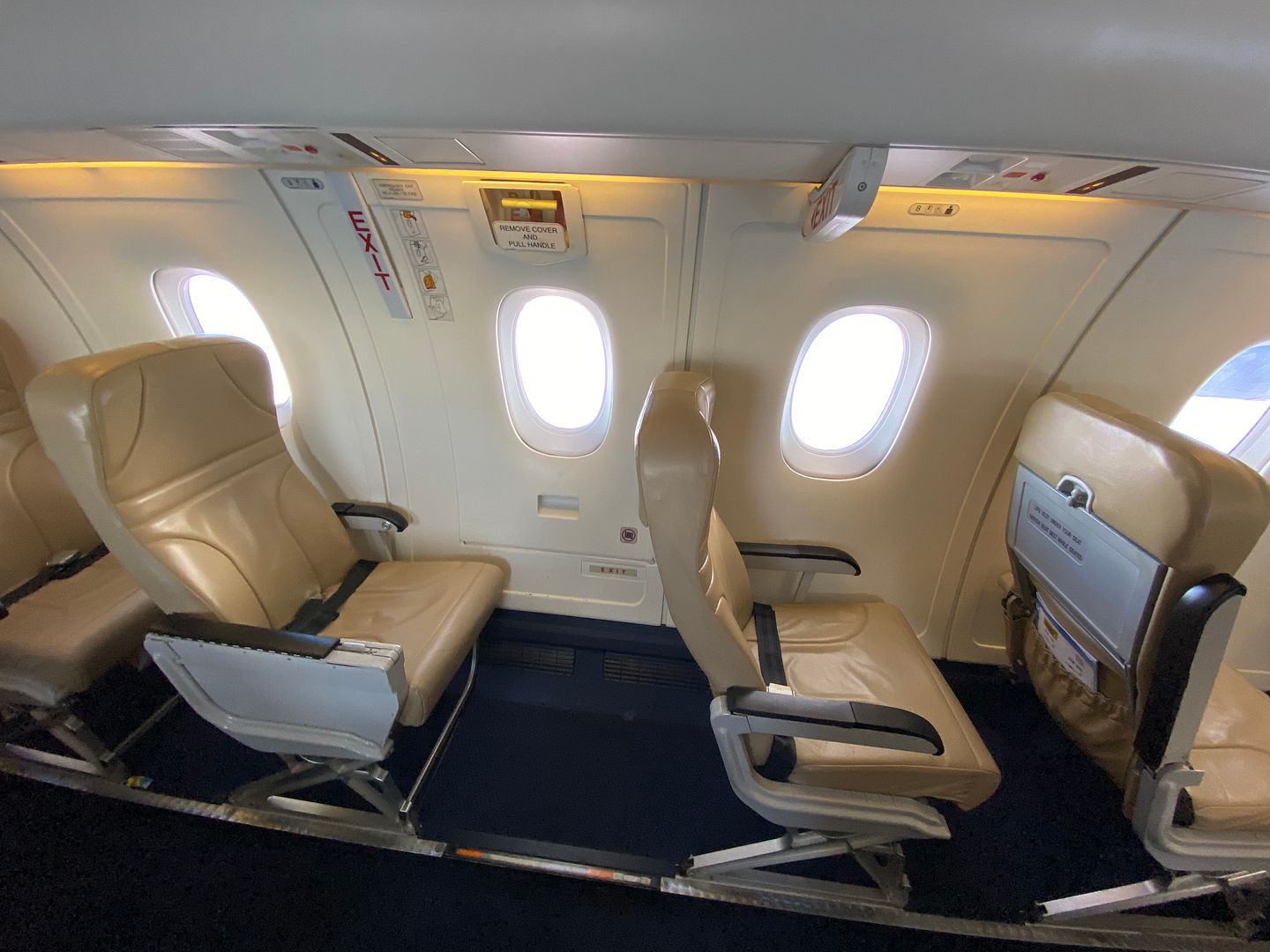 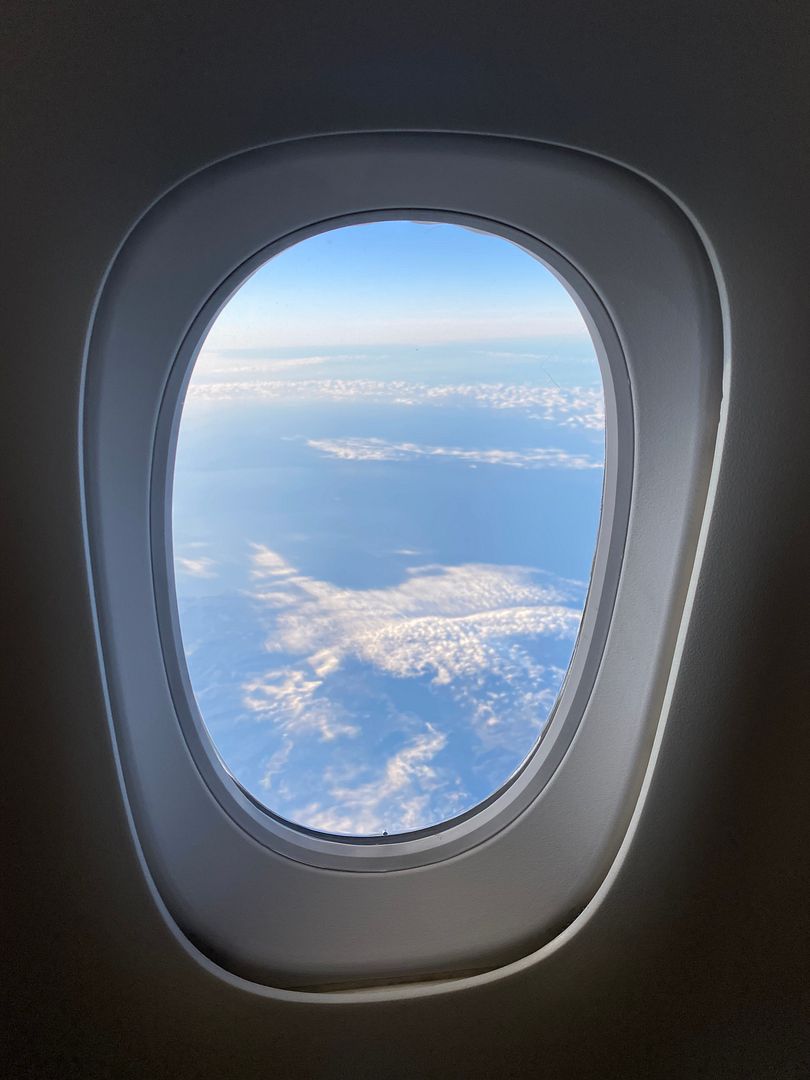 There is a galley in the back and there is no oven but it isn’t necessary as they don’t serve meals, given their longest stage length is two hours.

There is also a bathroom, which is really small. There is no running water faucet given the winter situation at Taos, NM. There are plenty of disinfecting wipes and hand sanitizer though.

Cabin Service:
Kimberley took orders for beverages, which include assorted juices, tea, coffee, and some high-end premium non-alcoholic drinks. However, there are no sodas and I am not aware that alcohols are offered.

I have this sparking blueberry mint water on the first segment. 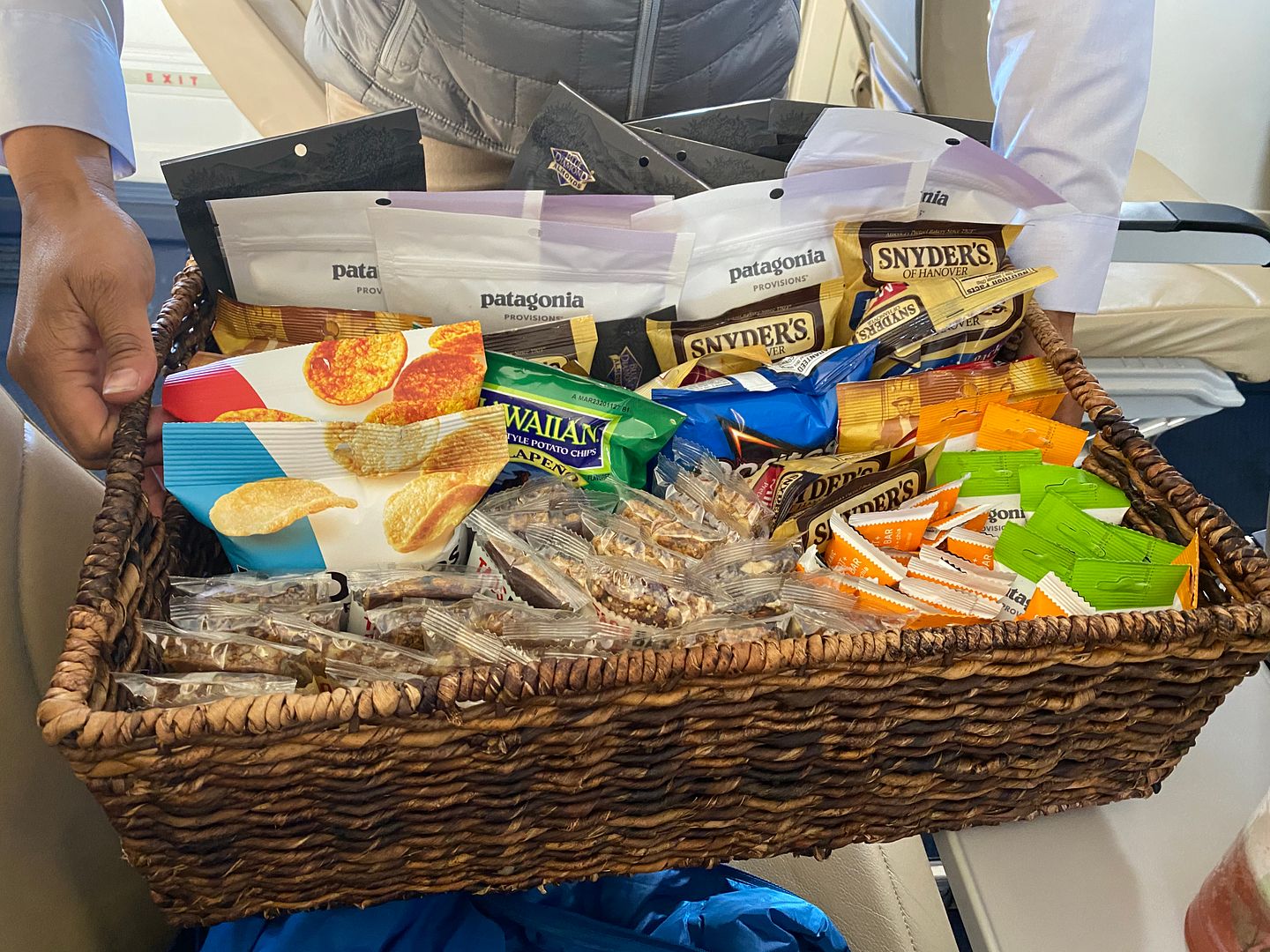 Boxed waters were passed out later in flight.

Blankets are available on demand!

It was just a beautiful morning to fly. 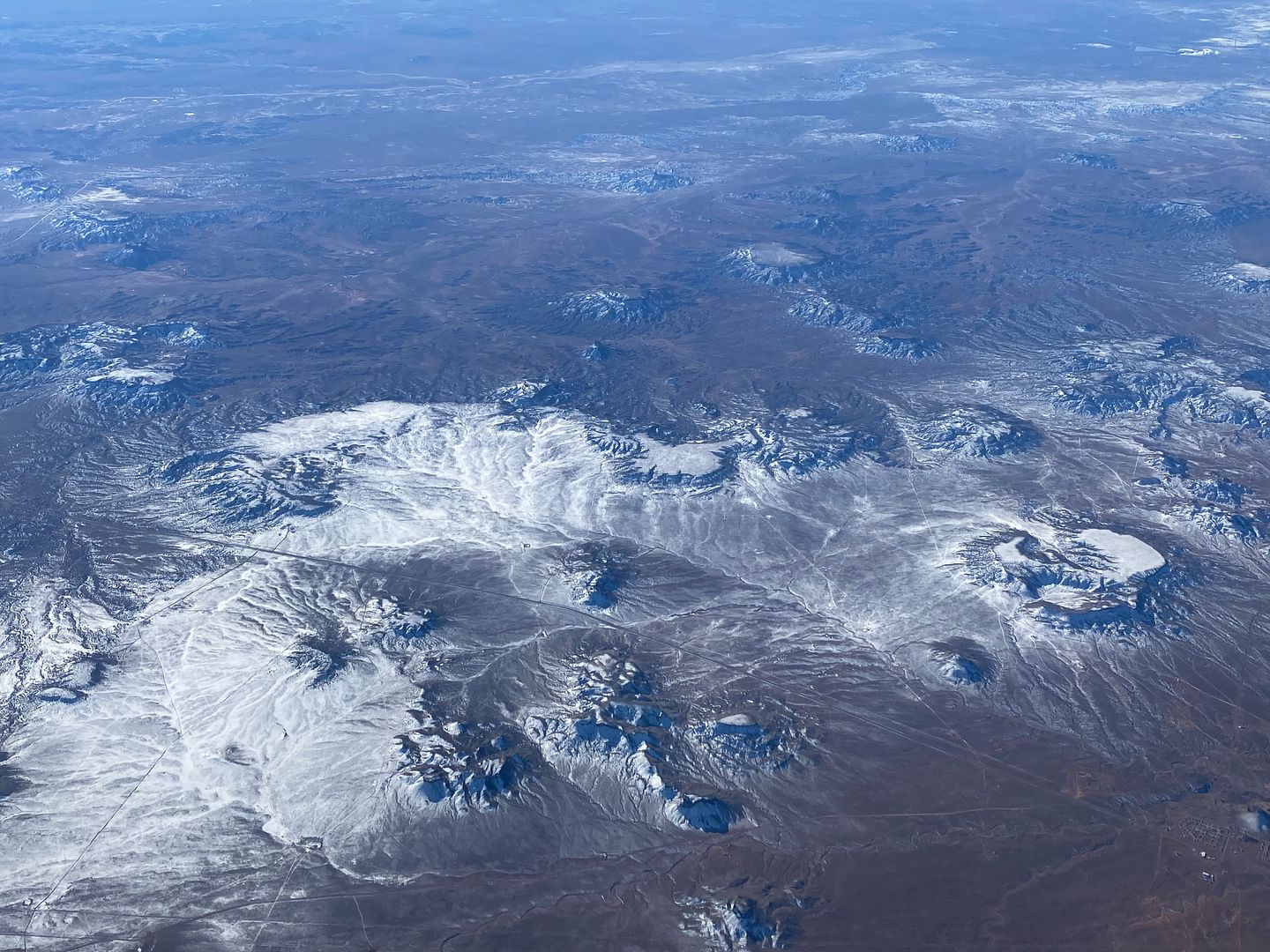 We landed at R/W4 at 10:11am and parked at the cute little terminal two minutes later.

Once again, you were free to walk around and no one was chasing us.
Top

First, the scenery is beautiful, and I took a few photos of this beautiful Taos Air’s Dornier 328 JET.

Second, the terminal is basically just a small room but the décor is really cozy. There is basically one ground staff talking with passengers. Third, there is one single men and women bathroom inside the holding room, but there are additional temporary restrooms in a trailer type structure next door.

Check-in procedure was the same as before, and Kimberly started to check in passengers about thirty minutes prior to departure. The flight was fuller on this segment with nine passengers.

The pilot once again led us all the way to the plane, and boarding was completed on time at 11am.

Flying time was a bit longer, due to ATC rerouting us. The pilots told us that they still had some residual issues from the storm that disrupted their operation the previous day.

We took off at 11:10am for the hour and forty-seven minutes flight. 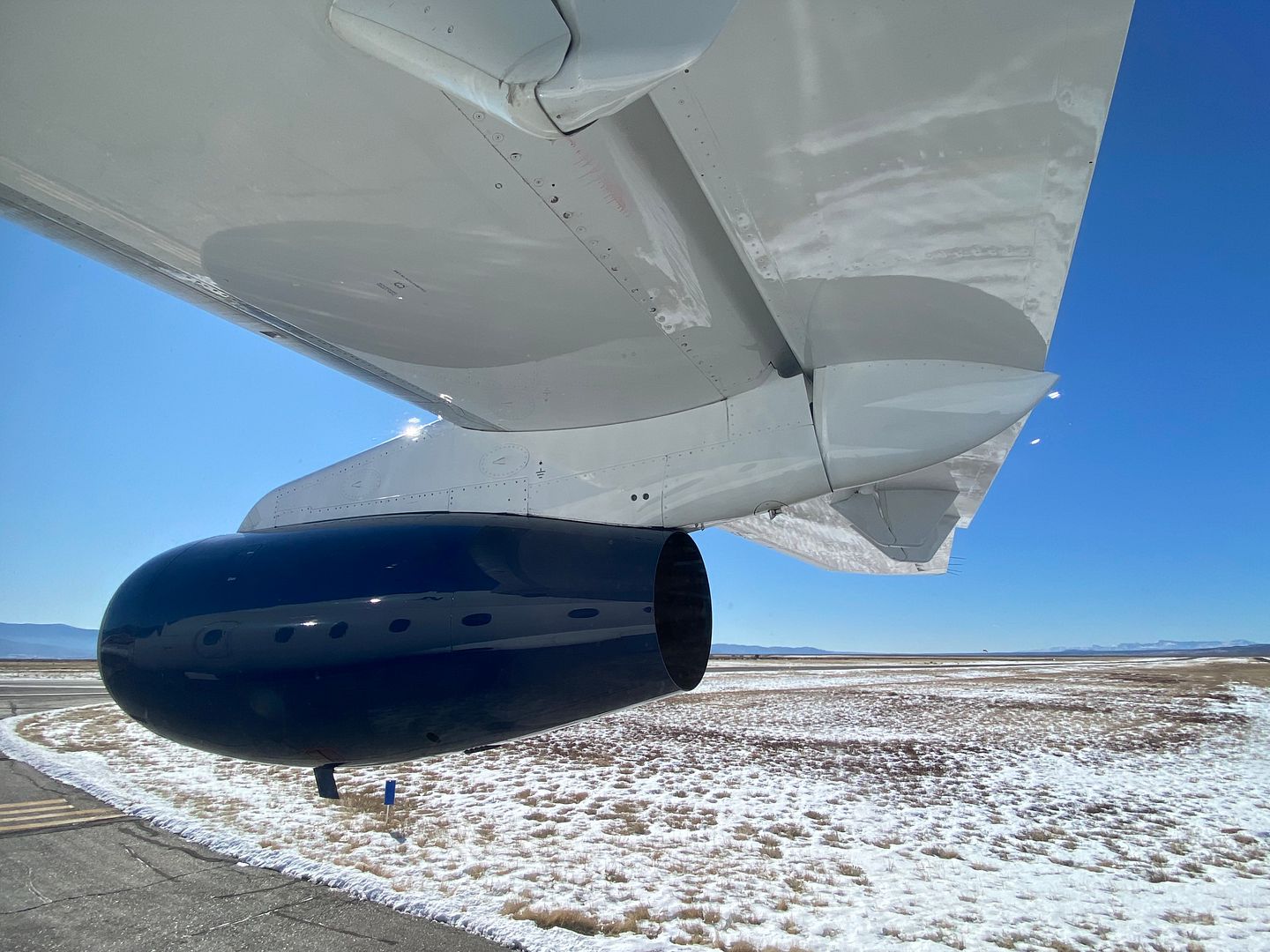 Here is our routing! The service was similar to the other flight.

This time, we got Ben & Jerry’s ice cream. It was a choice of Cookie Dough or Caramel Fudge Brownie ice cream.
It hits the spot, as there was no food option at Taos Regional Airport.

The same snack basket made the round too, and Kimberley checked on us quite frequently.
I chatted with her briefly and she told me that she had to work the return flights too, but she lived only five minutes away from Hawthorne Airport, so it was an easy gig for her.

We began our descent at 1:28pm Dallas local time. Great scene on approach to DAL. 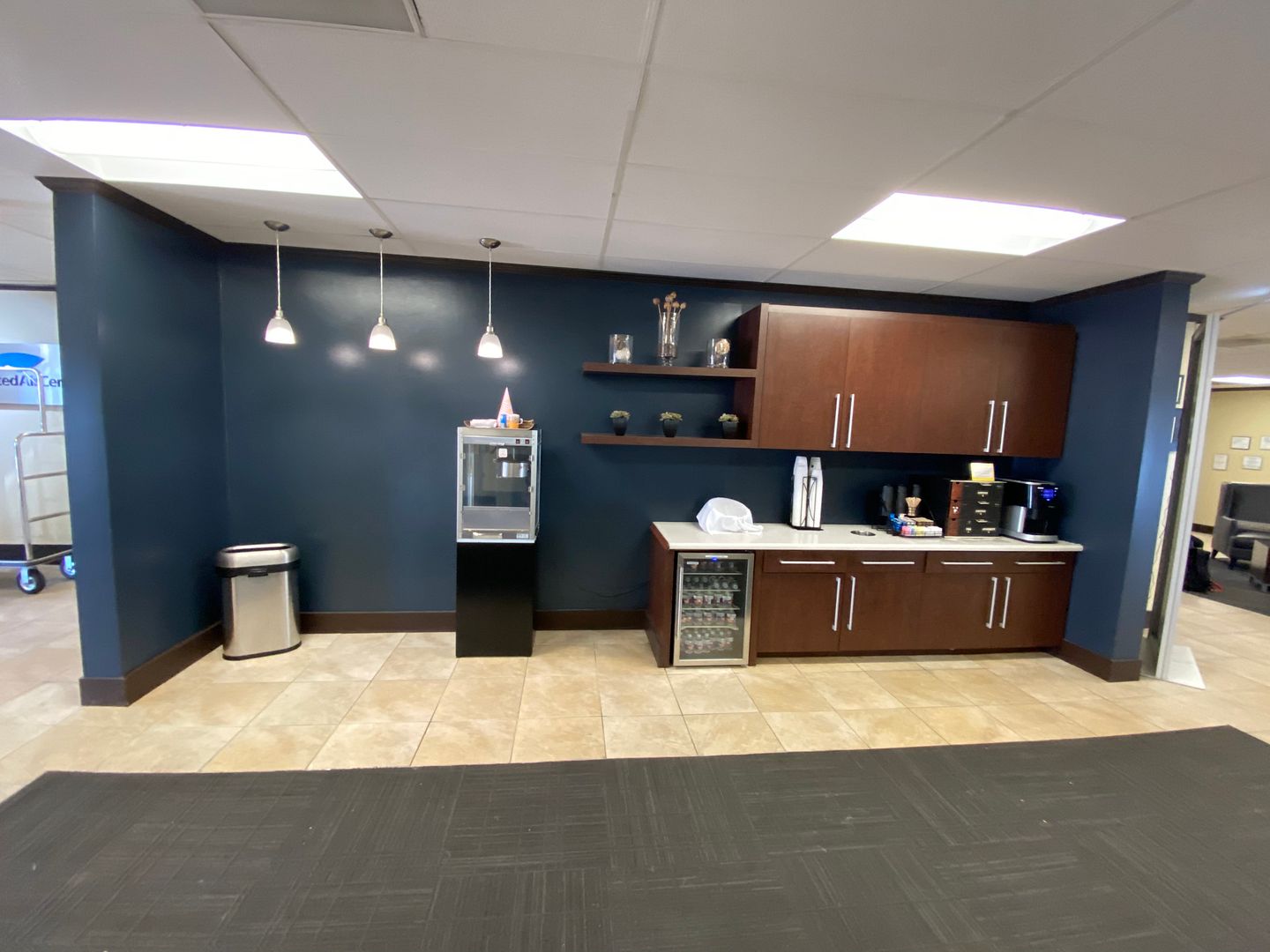 There was an aviation journalist trying to seek her way back to the main terminal for her connection flight. She tried to ask at Taos and the pilots and F/A really did not know. She claimed that the website did not provide much information regarding connection to the main terminal. Unfortunately, Taos Air does not provide transportation back to the main terminal. Honestly, I do not expect it but the website should clearly state that passengers should plan to use taxi or Uber, and as well as padding their schedule. Including me and this journalist, there was one other passenger connecting to somewhere else at Dallas Love Field. Maybe Taos Air should offer some kind of options for connection passengers, even if they charge a moderate fee. At the same time, their operation only runs three months, so I don’t expect it.

In conclusion, I want to thank airliners.net forum board for leading me to this interesting experience onboard this lovely Dornier 328 JET. Taos Air/Advanced Air does a great job, and I recommend it to any AV geek for giving it a try. You can easily find affordable fares, especially if you go against the traffic flow.

I hope you enjoy this short report!

Was hoping someone took them so I could read about it. I have been following them since their inception.

Long term viability?
Instead of typing in "mods", consider using the report function.
Love how every "travel blogger" says they will never fly AA/Ethihad again and then says it again and again on subsequent flights.
Top

Thank you very much for this beautiful trip report about my most favorite aircrafts!
Top

Very interesting report. I might have to try this one oh and it does say on their website in the inclusions and perks that select beer and wine is also available..
Top