Background: My first-ever flights within Europe, in European Business Class, took place four years ago when I flew the Helvetic Airways F100 and the Swiss Avro RJ100. I had enjoyed flying those rare birds, as well as experiencing the top-notch service to be found onboard when flying in Europe. In the time since, those aircraft have sadly been retired from service. The Helvetic Fokker F100 was replaced by the Embraer E190, and the Swiss Avro RJ100 was replaced by the Bombardier C-Series. On my last European trip, main destination Switzerland, I took the opportunity to try these two new Swiss jets. First up was the C-Series, which had officially been renamed by Swiss to the Airbus A220 prior to my flight. The return was on the E190.

Please enjoy the reports, and I look forward to your comments.

What better way to get on the brand-new Airbus A220 for the first time than by flying Swiss, the launch operator. Swiss had taken delivery of the Bombardier C-Series in 2017. In the time since, Airbus took over the program and renamed the aircraft the A220, and Swiss began referring to the C-Series as the A220 about a month before my flight. I was very happy to be flying it for the first time on my short flight tonight, Düsseldorf to Zürich.

Düsseldorf airport was very quiet on a Saturday evening. I stopped by the Swiss check-in zones 111 to 114, finding no line. I received a cardstock boarding pass. There was also no one at security, where I found a full body scanner. I was quickly airside by 16:45. Boarding was set for 18:25, and departure for 18:50. I was invited to use the Lufthansa business lounge, which was right above my gate, A50. The lounge was very empty and quiet. It was a nice quiet night for this flight.

I headed downstairs to the gate prior to boarding. Boarding began five minutes early with Business Class and Senators. It was a jetbridge gate, so I boarded right onto my A220. The A220 has nice 2-3 seating. Just like when I had flown the Avro RJ100 and the F100, I was again trying the bulkhead seats on the A220 and the E190. I was in bulkhead seat 1A. I found acceptable bulkhead legroom, a little restricted on the footroom, but not a problem, as this flight was going to be very short. On the overhead panel, there were personal vents plus a little screen showing the map and other flight information, a nice and unique touch. The slimline seats were finished in an attractive brown leather. The A220 had very large windows. Overall it was very nice. As usual Swiss Business Class blocks the adjacent seat so there is no one next to you. In the pair of seats 1AC, 1C is blocked, and in the three-seat side 1DEF, 1E is kept vacant. I was expecting a very nice, short flight to Zürich. 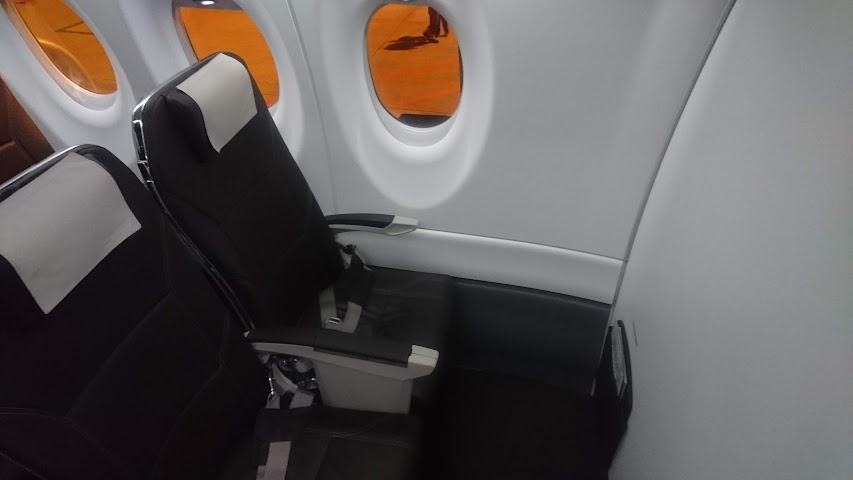 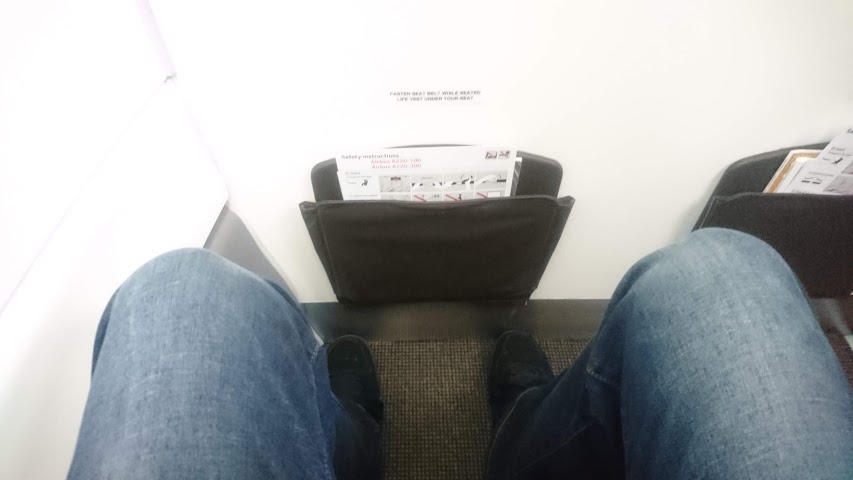 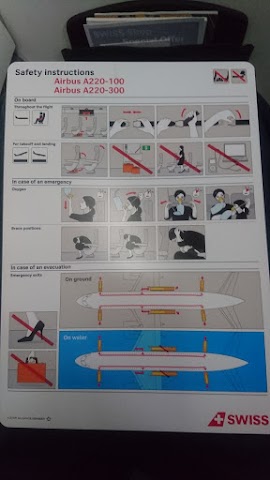 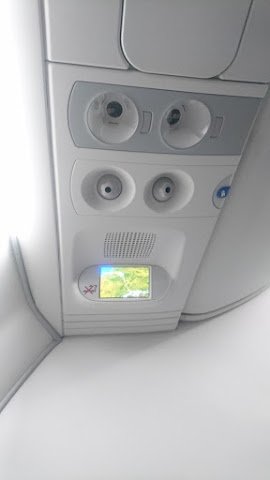 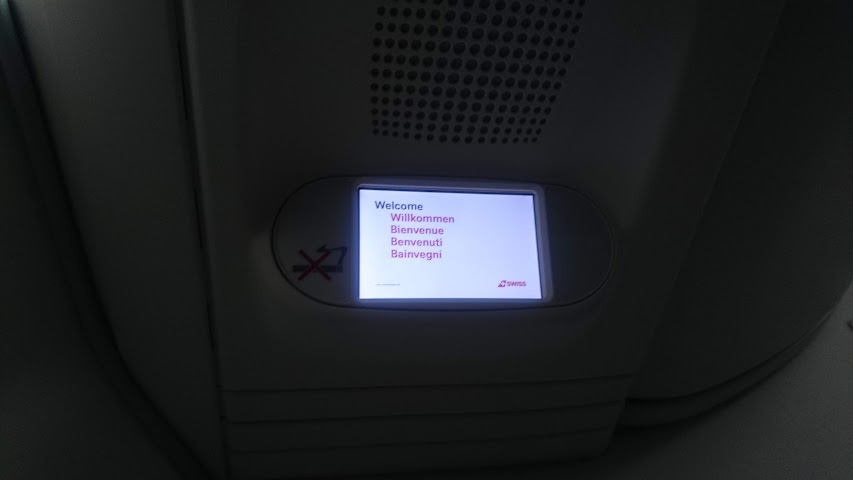 Settling in and getting comfortable, from 1A I could see into the jetbridge as boarding continued with a steady line of passengers. The little overhead screen was showing only a 38-minute flight time. I really liked the little overhead screens. Tonight there were 4 rows of Business Class, with 3 possible seats per row, for a total of 12 seats. The load was 12/12.

The door was closed, jetbridge pulled back, and the captain's announcement introduced himself and the first officer, and welcomed us onboard the Airbus A220. Pre-departure packaged towelettes and bottled water were handed out. The purser's welcome message introduced herself, and advised approximately 50 minutes in flight. Pushback came at 18:55. The safety video was shown on the small overhead screens. It was only in English with English subtitles.

Takeoff was from 5R at 19:07. There was a bit of noise at the start, but then it got quieter and quieter. It was a pretty long roll, but the most notable part was that it was very quiet. We finally lifted off. After takeoff, there were already only 45 minutes to go.

Views from 1A after takeoff: 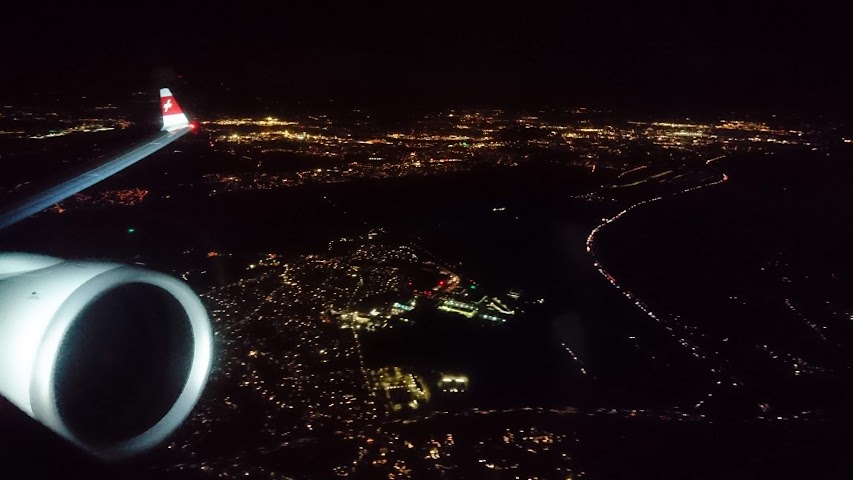 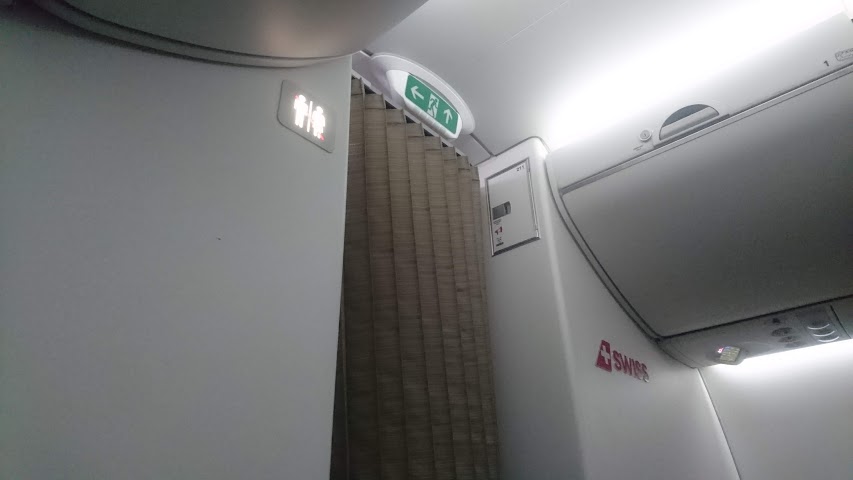 Looking or over lit-up Germany, I really thought the A220 windows were very big. As we crossed 10,000 ft, came an announcement: "Cabin crew: released." The galley curtain was shut as they sprung into action for service on such a short flight.

I enjoyed the meal service, and everything had very good flavor. When offered a drink, I asked for a beer. I was offered the same beer as last time, Quöllfrisch Hell, or a special Swiss bock beer, Alpstein Bock, which I accepted. Both are brewed by Swiss brewery Appenzeller Bier. I was happy to try a new Swiss beer onboard. After meals were served, a second drink was immediately offered. I would have liked to try both Swiss beers tonight, but I was still not done my bock! Yet we were already halfway there, according to the map. 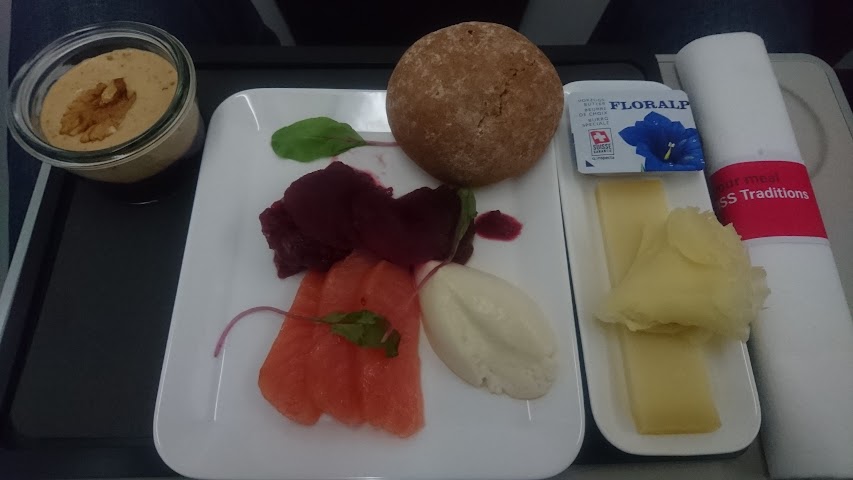 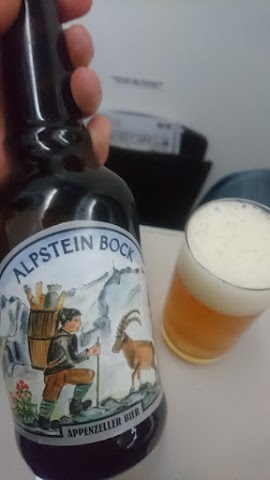 I finished my beer just as the captain advised that we'd begun descent into Zürich and have twenty more minutes left. This flight was definitely way too short. Too short to even try both Swiss beers! That being said, just as I had discovered on my first flights within Europe four years ago, it was still an excellent level of service for a flight of this length. I remain impressed with European inflight service. And I love that Swiss is now offering two Swiss beers, as opposed to only one, like on my previous flights. Minutes later an announcement asked the cabin crew to prepare for landing. 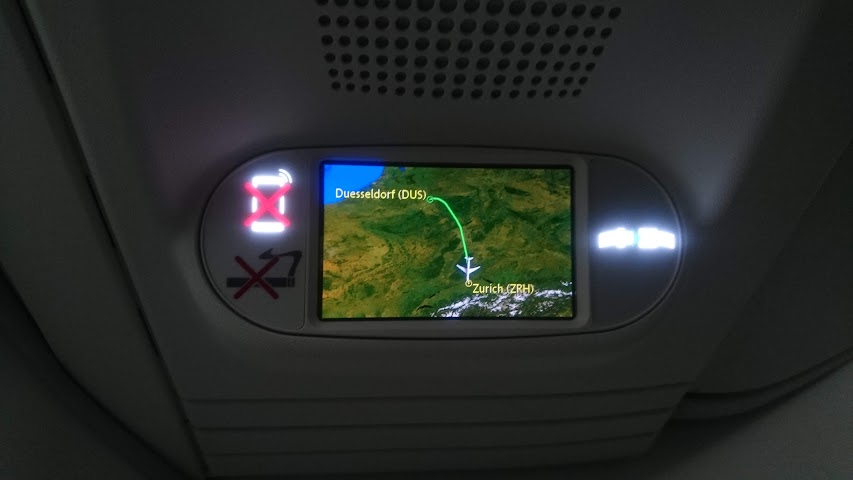 I still like these enjoyable European flights. I've now had some longer segments, and I do prefer them longer, even though Business Class is just Coach seating. My flight tonight was just too short to enjoy the Swiss service. I also liked the A220. I didn't have enough time to fully enjoy the experience, but it made a good first impression. During descent an announcement advised connecting gates.

We had a smooth landing into Zürich at 19:54, and we parked at Gate A17 at 19:57 - another jetbridge gate. It was nice to get jetbridge gates on both ends. During deboarding, the purser offered everyone Swiss chocolates.

My plane tonight had been HB-JCS, the second-newest A220 in the Swiss fleet, delivered less than one year before my flight.

At the gate in ZRH: 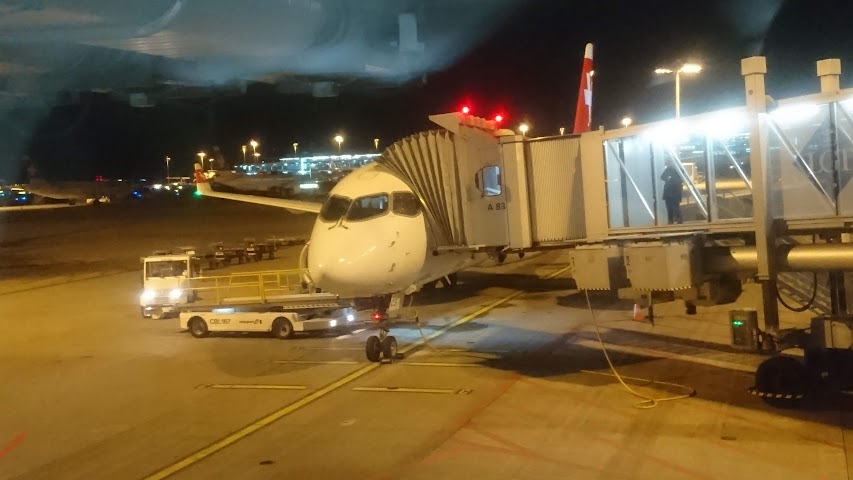 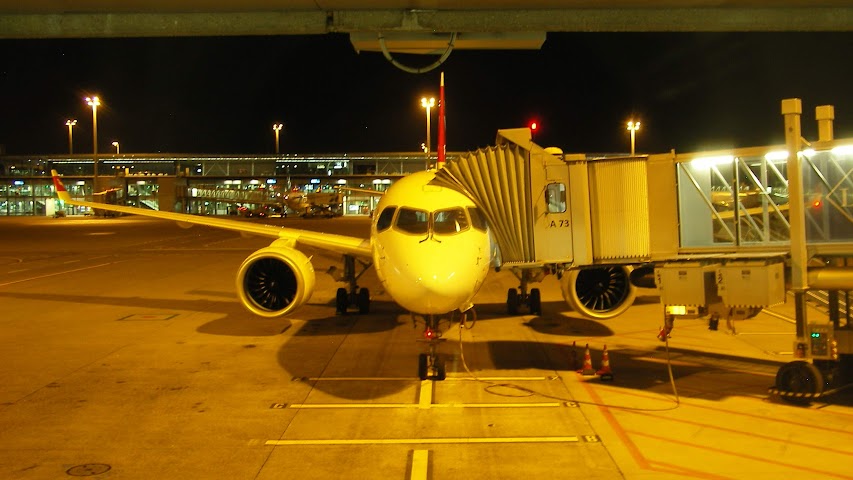 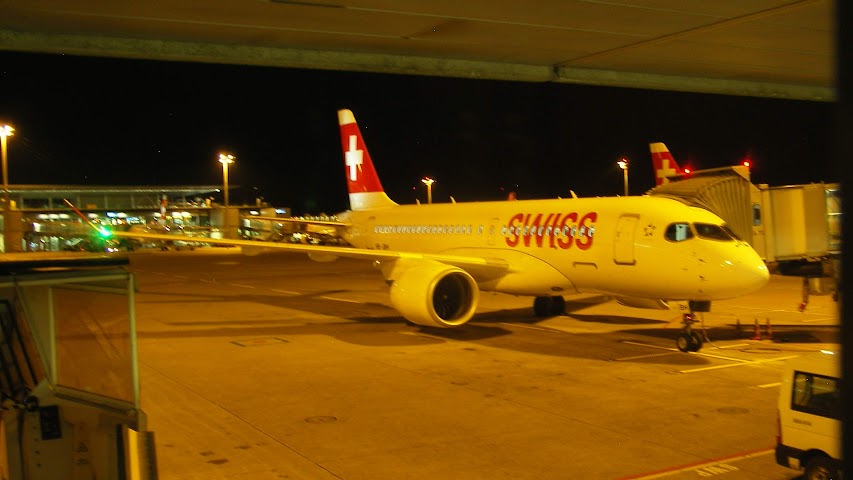 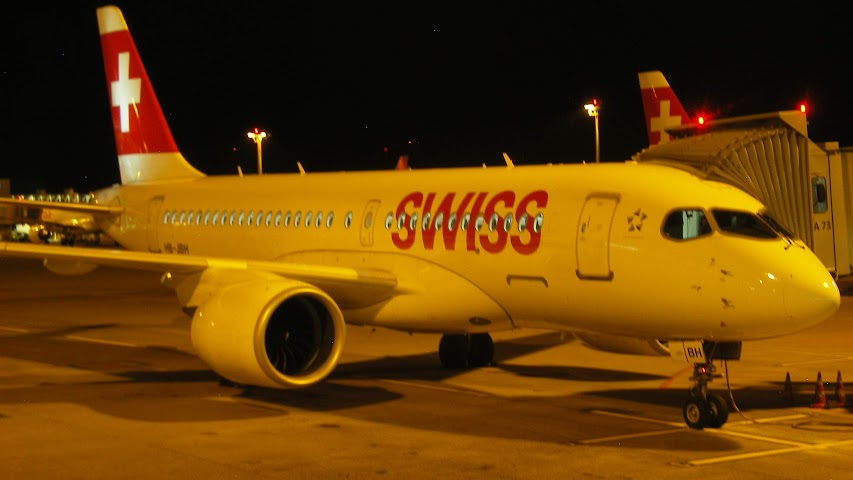 Welcome to Zürich, hub of Swiss: 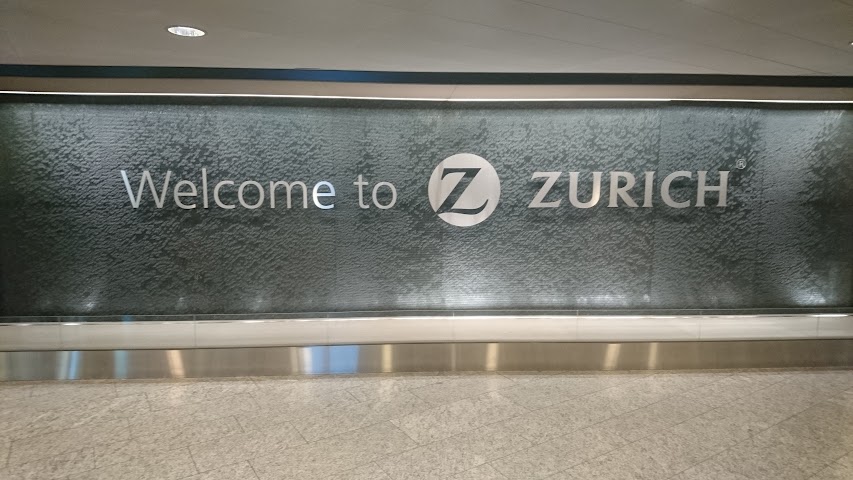 Already in possession of my boarding pass this morning, I went straight to security. There was only a small line, and I was quickly through by 05:35. My gate was to be announced at 05:55. Boarding was set for 07:05, and departure for 07:25. I stopped by the Swiss business lounge. My gate was announced as A50, a bus gate. I headed there about fifteen minutes before scheduled boarding. It was around that time that I realized I was flying this morning on LX1016 to Düsseldorf. Four years ago when flying Swiss for the first time, I had actually photographed LX1016 to Düsseldorf; at the time, it was operated by Avro RJ100. 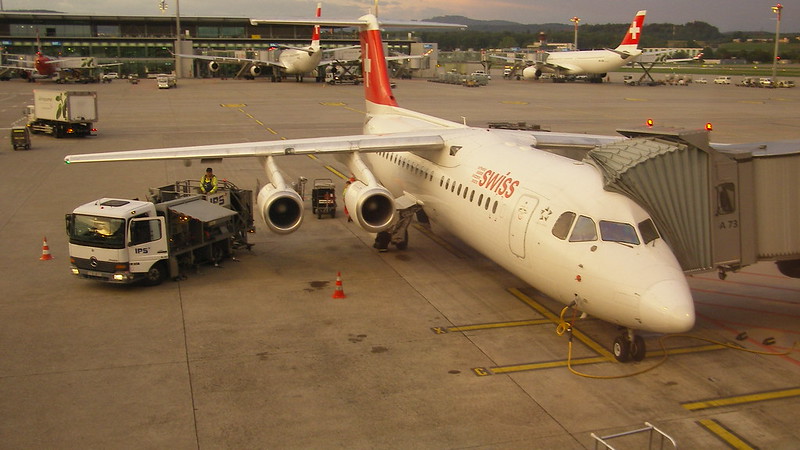 Boarding began at 07:00 into a holding area for a ten-minute wait for the bus to arrive. Fortunately in that time all the passengers were accounted for, so when the bus arrived, we all got onboard and it immediately departed to drive us to our plane...all 45 of us. It was a quick drive to the nearest E190, HB-JVR. The third-newest Helvetic E190, HB-JVR dates to June, 2015, so it had been pretty new when I spotted it back in September, 2015. 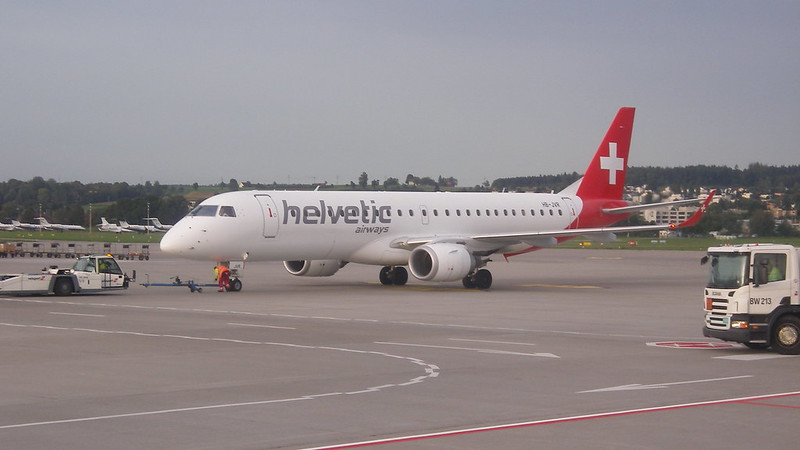 My aircraft on-stand in November 2019: 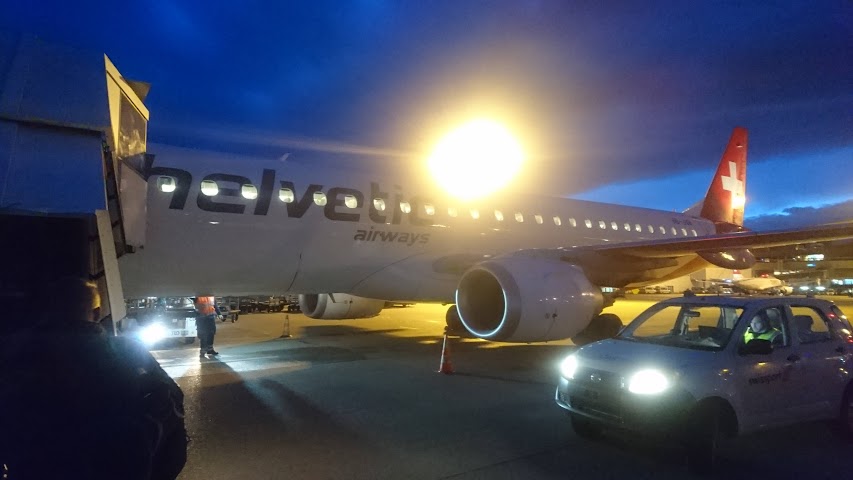 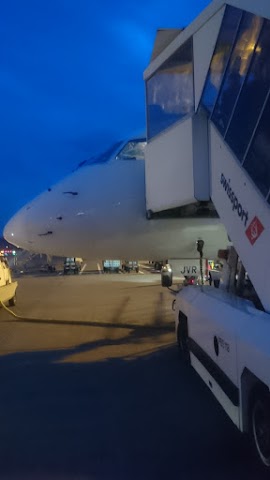 I climbed up the stairs into my Helvetic E190. My bulkhead seat was 1F. The E190 had 2-2 seating, with three rows of Business Class today. Once again adjacent seats are blocked, so three rows means a possible six passengers. The load was 5/6. Bottled water and packaged towelettes were handed out straight away. 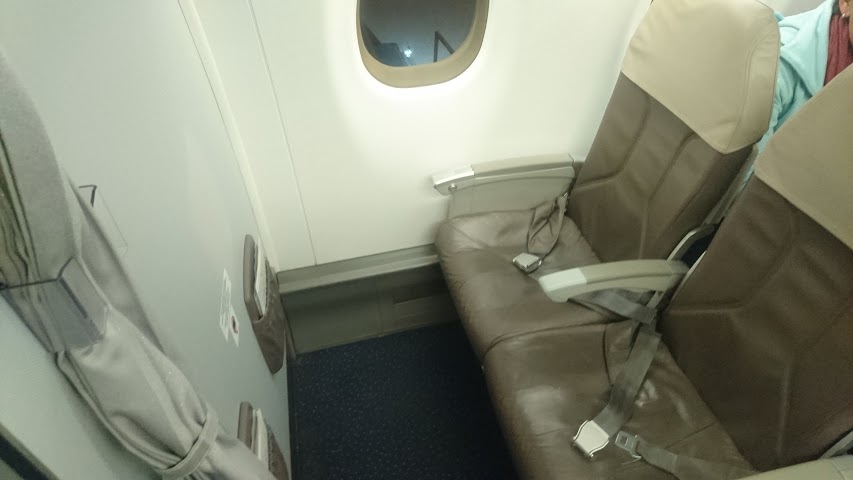 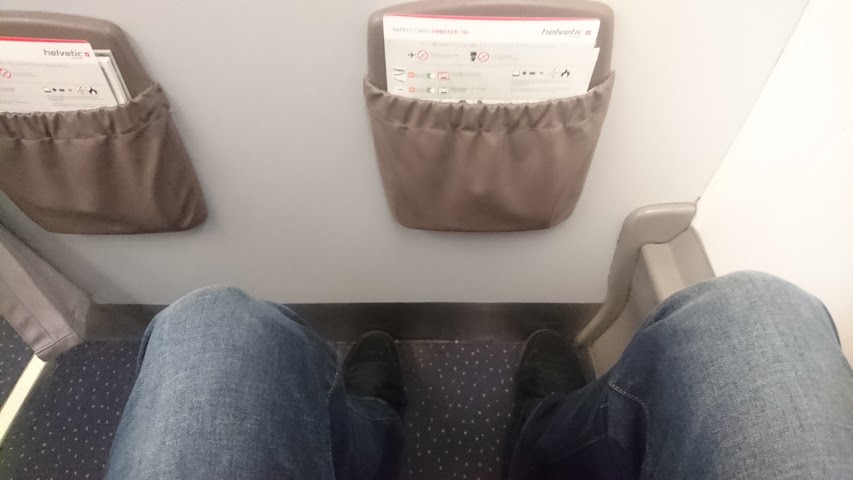 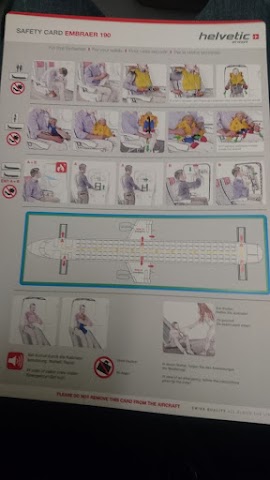 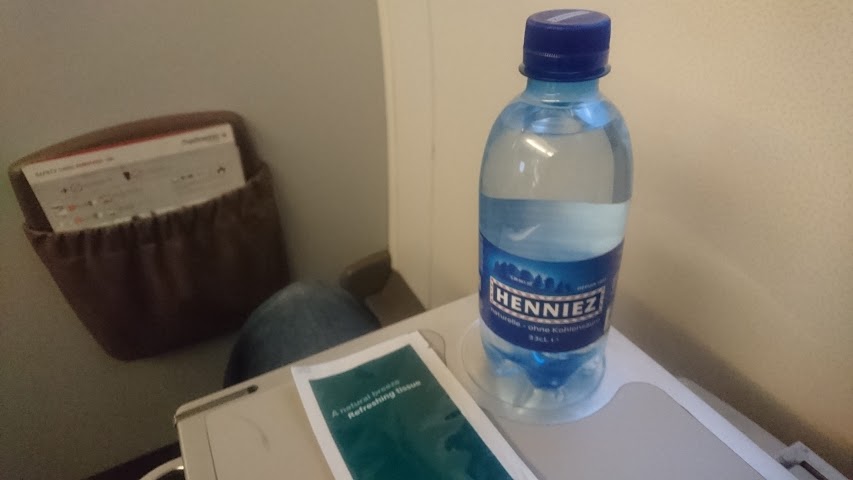 The purser welcomed us onboard this Swiss Star Alliance flight operated by Helvetic Airways, and advised a 55-minute flight time. The safety briefing was given in both German and English.

I like the E190. It has nice large windows. I found typical bulkhead legroom and leather slimline seats. It was perfectly comfortable for this short flight, and it was nice to have no one next to you in Business Class. Then again with only 45 passengers, pretty much no one had a seat mate this morning.

Engines were started on-stand and at 07:30, we pulled away. Lights were shut off for departure. A quick taxi took us right to Runway 32 for takeoff after a Swiss A321. At 07:35 our takeoff began from a stop. I enjoyed decent noise and pushback into the seat, a good takeoff for the E190. It was a quiet climb.

At 10,000 ft a chime was heard, and the flight attendants immediately went to work. The galley curtain was shut.

Breakfast service included three kinds of warm bread, I decided on a croissant, and to drink, an orange juice. It was a satisfying, typical super-short flight meal tray. 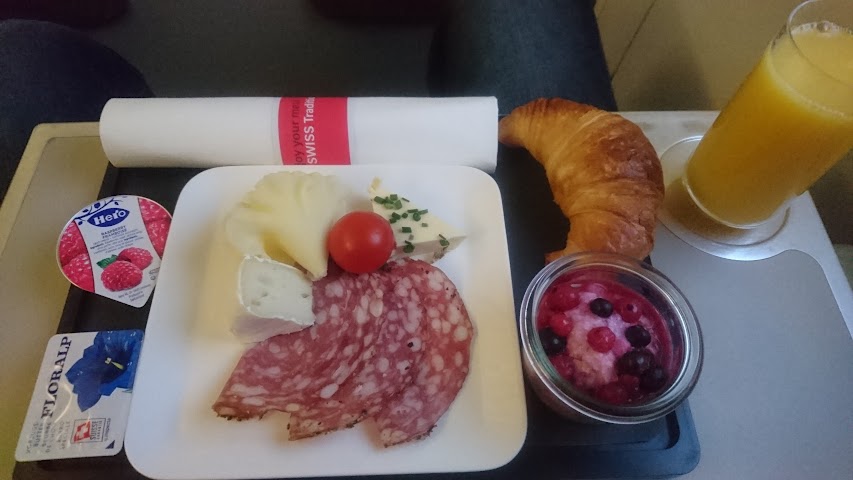 The captain announced that he was expecting an on-time arrival into Düsseldorf, where the weather was cloudy and 5 degrees.

Once the remainder of the plane was served, the cart returned to the front to collect service items. An offer of another drink was made, but I declined. I was resting my eyes and enjoying the rest of my E190 experience. 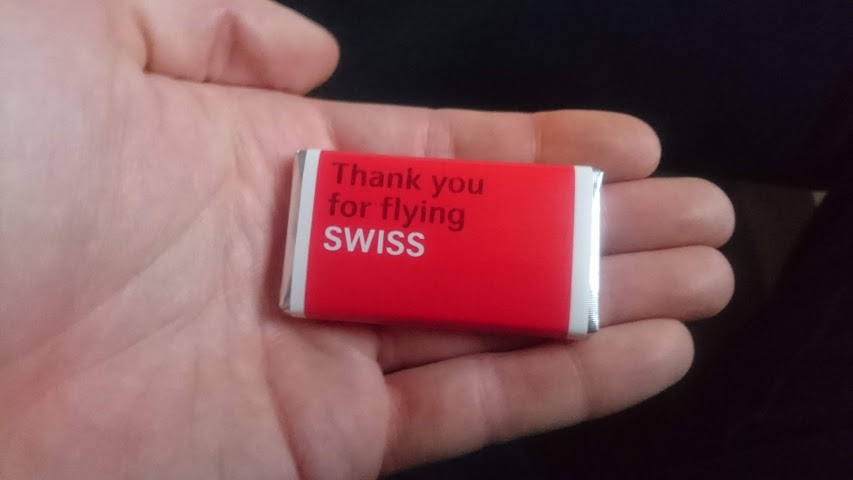 I am happy to have now flown all the Swiss regional jets: First the classics four years ago, the Avro RJ100 and the F100, and now the new A220 and E190. I hope to fly the Swiss mainline A320 series soon.

Tesla wrote:
I am happy to have now flown all the Swiss regional jets: First the classics four years ago, the Avro RJ100 and the F100, and now the new A220 and E190. I hope to fly the Swiss mainline A320 series soon.

Very cool. The A320s cabins are very nice, the all got retrofitted a while ago and while many of the older planes are ~25 years of age inside they look terrific. Also some A320NEOs coming to the fleet in a couple of weeks to replace the oldest frames, sure they are gonna be hella nice as well.
Top
Post Reply