Despite being a long-standing diehard oneworld supporter, with AA’s slow withdrawal from the NY-Orlando market in recent years I’ve had to become a bit more agnostic. On this occasion we were booking a week out and Delta First Class was certainly the most sensible option even though JFK is a lot more convenient for me and LGA being, well, a building site. I thought I’d take the opportunity to pen this report as a way of comparing the two.

I Ubered from home, stopping enroute to pick my wife up from work, easily getting to LaGuardia in plenty of time. Alas our Uber driver was a slave to her satellite navigation and not the road signs for LGA’s ever changing roadways. This caused us to end up over by the Marine Air Terminal before working our way back to Terminal D...Arrivals!

After figuring our way upstairs we found a bank of kiosks and printed our boarding passes. The TSA PreCheck line was completely empty and within a couple of minutes we were inside the nearby Skyclub. First impressions were...not good. The place was absolutely heaving with very few apparent spots for two people other than in the far corner with someone right next to us and now power nearby. The feel of the place was rather utilitarian with view to fitting as many people in as opposed to providing a relaxing place to wait. 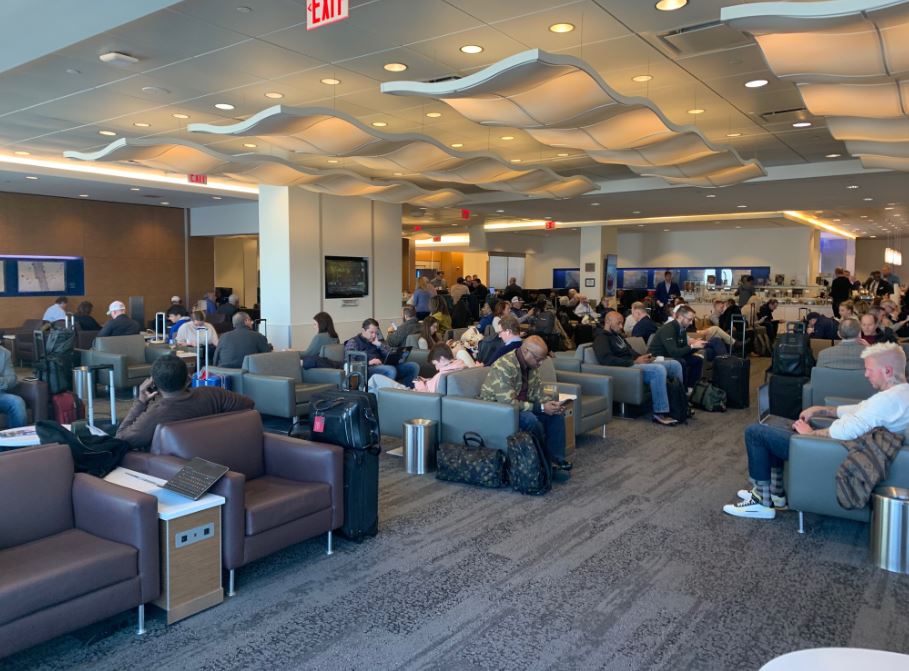 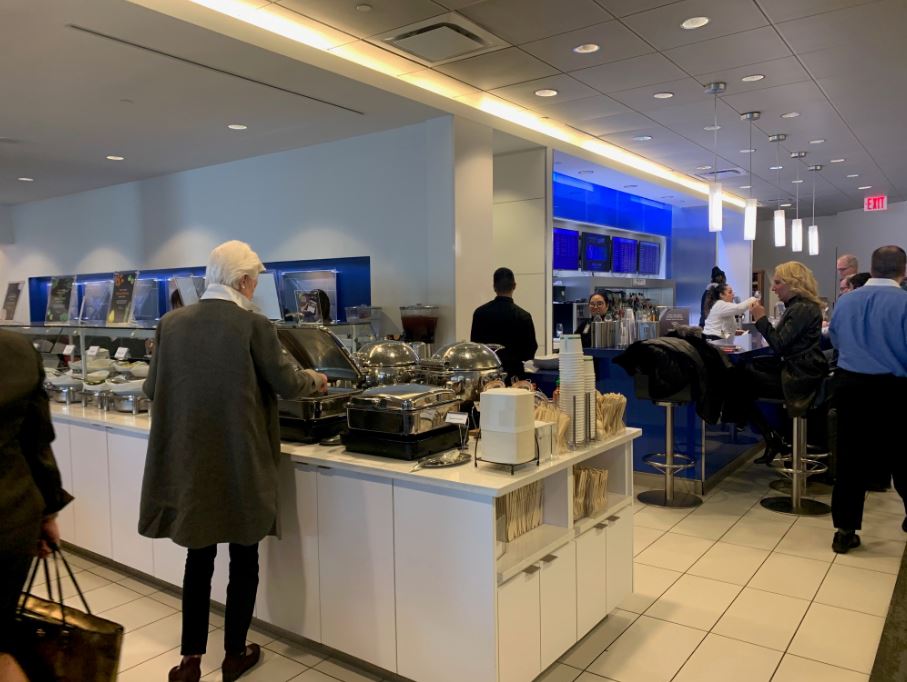 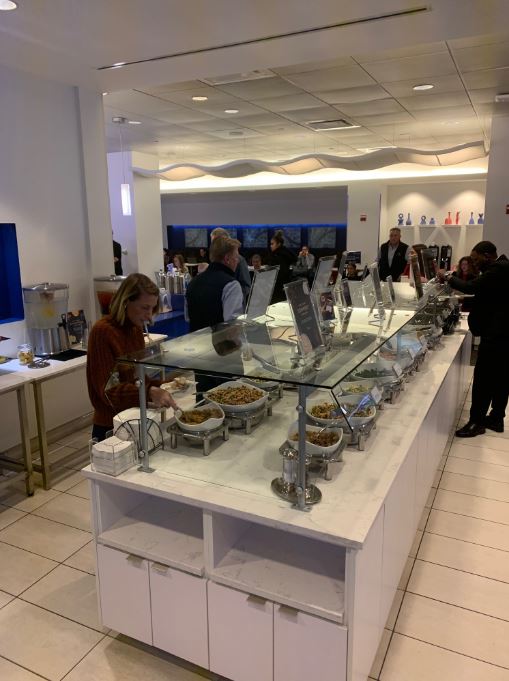 If I were traveling alone, given the masses of time on hand, I’d have been tempted to head to the American Express Centurion lounge or at least one of the Skyclubs in Terminal C, but my wife couldn’t be bothered. Overall it was a great departure from our usual Flagship Lounge experiences at JFK, where we have become friends with one of the bartenders who as soon as he sees us coming pours our usual drinks for us...

Alas, things did brighten up a little when I went to the bar. Delta have a great range of premium champagnes for purchase, including Dom Perignon and I indulged. The bartender poured the first half glass and noted it looked “a bit flat” and offered to let me have that as well as opening a fresh bottle for a full new glass, so I got rather good value out of that!

The lounge did empty out a little but was still replete with the usual walking talking douchey business types including one who loudly proclaimed “he wouldn’t have to deal with this any more as the corporate jet is back in service tomorrow”. Cue roll of the eyes from us and at least one other person in earshot...

The food changed over and I got a second glass of the Dom Perignon as time slowly ticked towards boarding with our gate moving from D2 to the most convenient possible D1 as our aircraft made its way enroute from Atlanta.

At 6pm, about ten minutes before boarding and being sick of Dom Perignon and Rice Krispie treats, we ambled over to D1, a gate tucked around the back of the ramp down from the main concourse to the gate area. Delta had changed their boarding procedures since the last time I’d flown them and we were the first in line at the Sky Priority “pole” (The Delta One, First Class and Diamond pole was off to one side). The gate agent made it very clear boarding would be from the “poles” but that didn’t stop one guy from leaping up and attempting to cut ahead as she waved us forward after the “those needing more time” and active military were called. 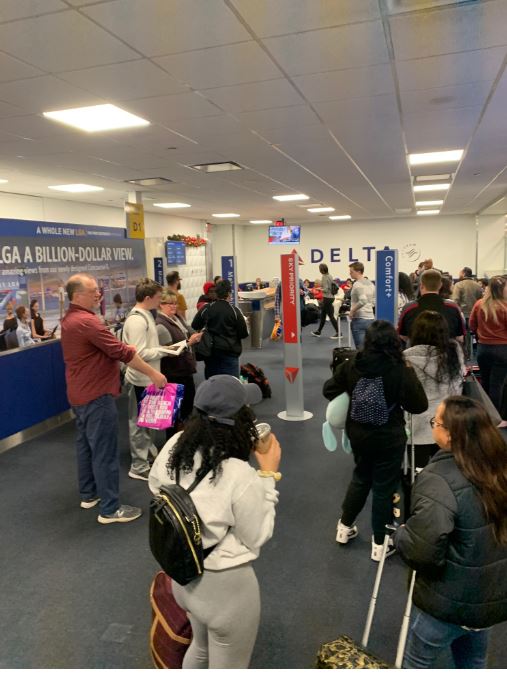 By 6.15pm we were welcomed onboard and settled in to our seats replete with blanket, pillow and mini Dasani water bottles perched on the console. The seat pitch did feel a little tighter than AA’s equivalent aircraft on this route, but certainly not as much as say AA’s legacy US Airways A321. 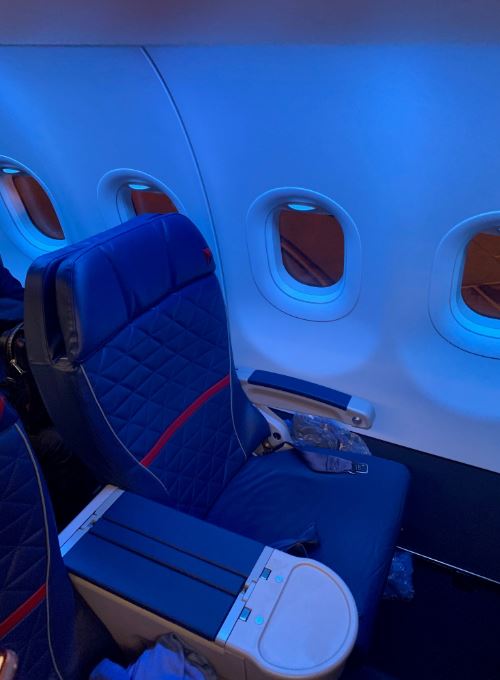 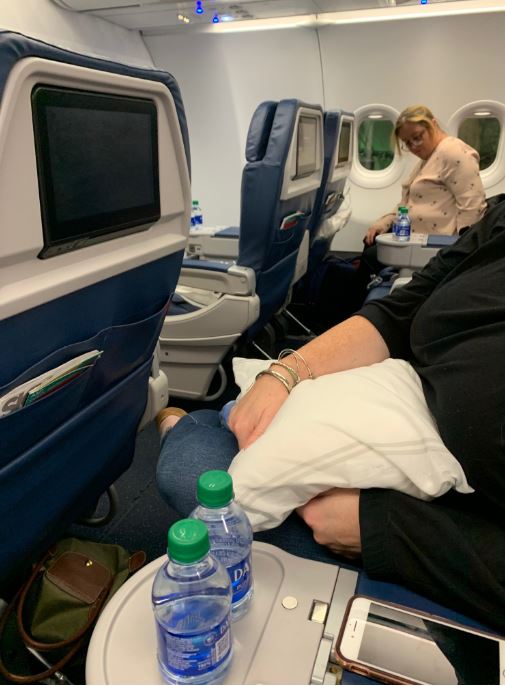 As is the case with all new Delta aircraft, this particular example being 6 months old, all seats were equipped with both power and PTVs so I had a good browse. The excellent content and super responsive interface was rather impressive but on a short flight such as this I mostly added the films of interest to my Netflix queue and found a documentary about the history of video games as a potential for when airborne. 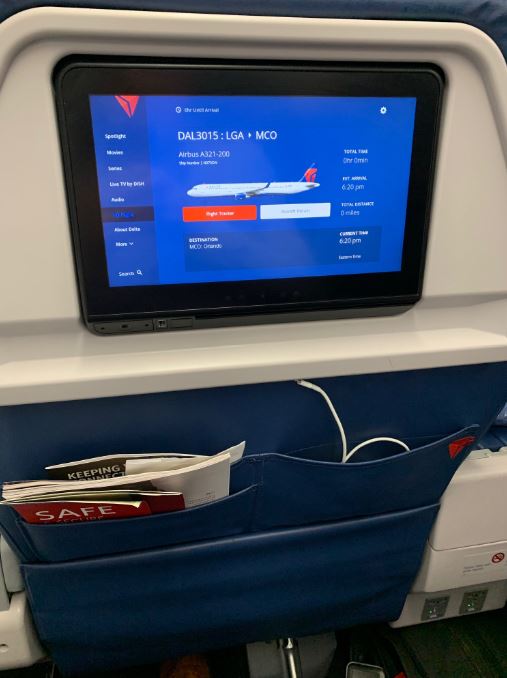 Boarding continued at a decent pace with regular announcements for full bins and one of the First Class FAs making amusing chime ins, “I see you slowing down. You’re worrying me! ABC on the right, DEF on the left!”. At this was going on one of the FAs in First Class did a great job in offering a full range of pre-departure drinks. 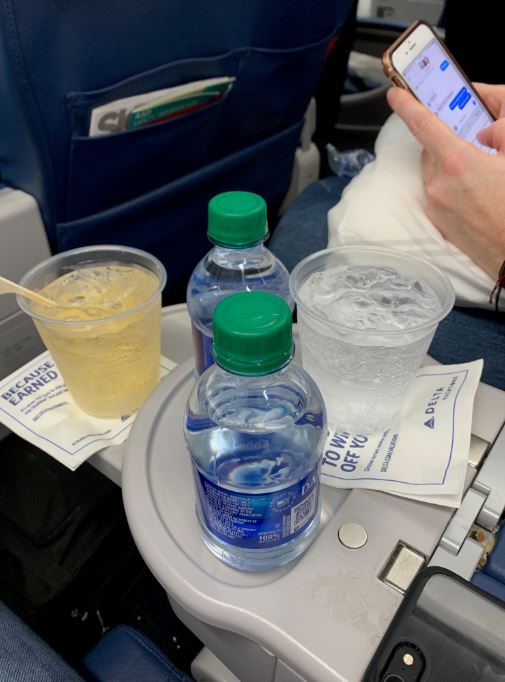 By 6.40pm the doors were closed and ten minutes later we were backing out of the cul-de-sac with views of the continued work to the terminals as we trundled over to runway 13, something the pilots announced to the FAs enroute to the threshold. I did rather like the Delta safety video, nothing particularly groundbreaking apart from the serious, almost Hans Zimmer-esqe movie soundtrack backing music.

Sitting on the left side Manhattan seemed within arm’s reach and I knew we were on the correct side of the plane for the scenic tour of the city on ascent. After a relatively short take off roll we were aloft, ascending rapidly over northern Queens and the Bronx, the lights of the city below. As LaGuardia disappeared behind the engine clouds obscured the views below and I focused on the inflight entertainment. 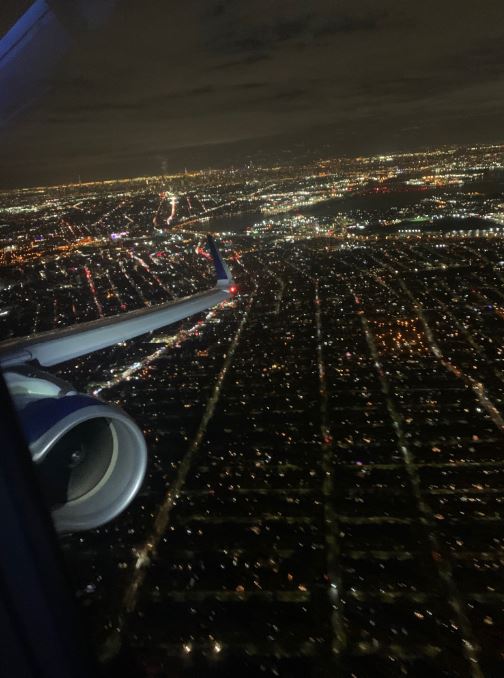 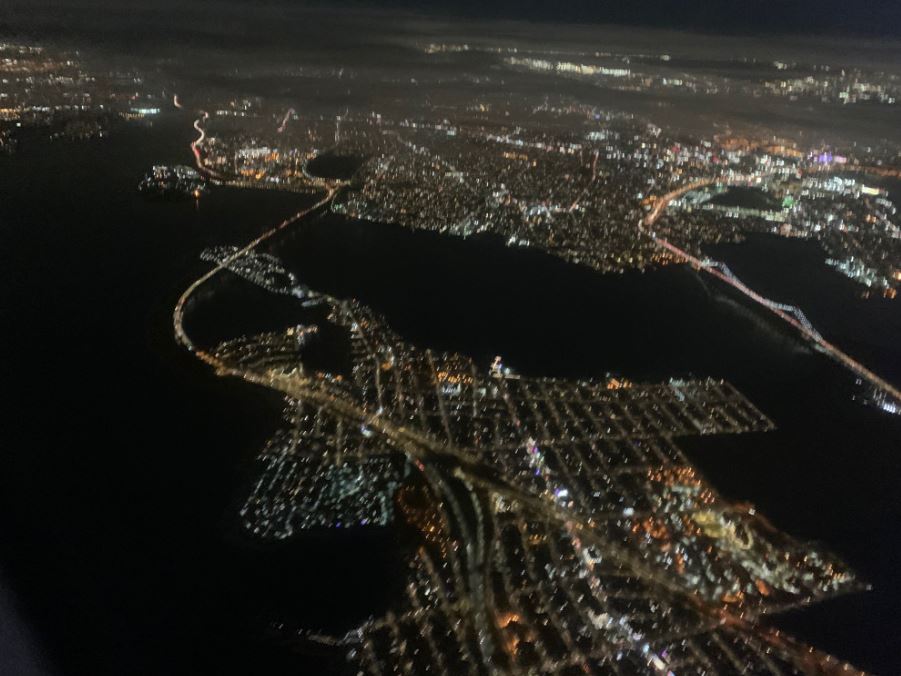 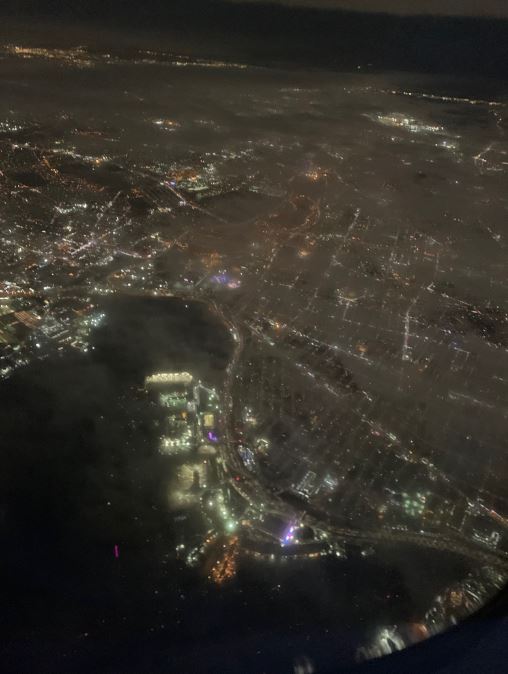 Fifteen minutes after departure and still enroute to our cruising altitude of 36,000ft the flight attendants emerged from the front galley and the service kicked off. Initially this was with hot towels and then the table was laid ready for the…snack basket!? I knew, having pre-ordered that there was a full meal service but I wasn’t expecting this just prior to the meal service. I took a glass of white wine to go with my honey ginger salmon which arrived a short time later. 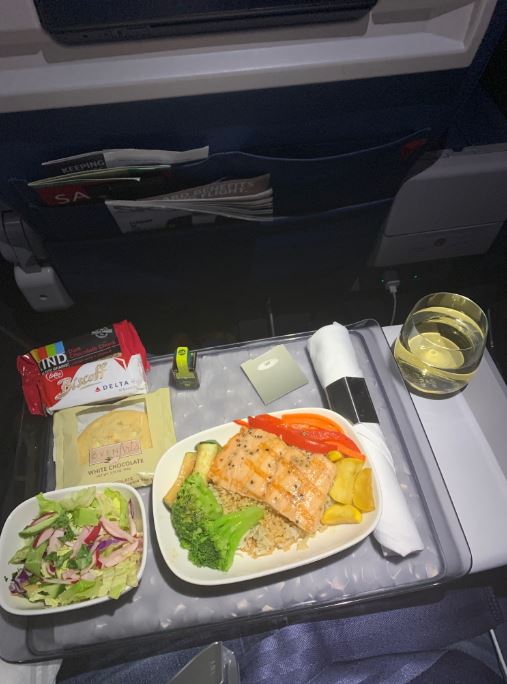 I was rather surprised by the food. I’d heard, even by domestic standards, Delta’s food was pretty wretched but there was certainly nothing wrong with my salmon and my wife’s chicken salad didn’t elicit any complaints either. I did prefer the warm bread options that AA offer though and there were no cookies warmed onboard, only prepackaged ones on the meal tray.

Usually I just listen to music and look out the window, even with a full range of IFE, but my ancient iPod was lacking charge and the window views were non-existent so I reverted back to the video games documentary I’d spotted earlier. 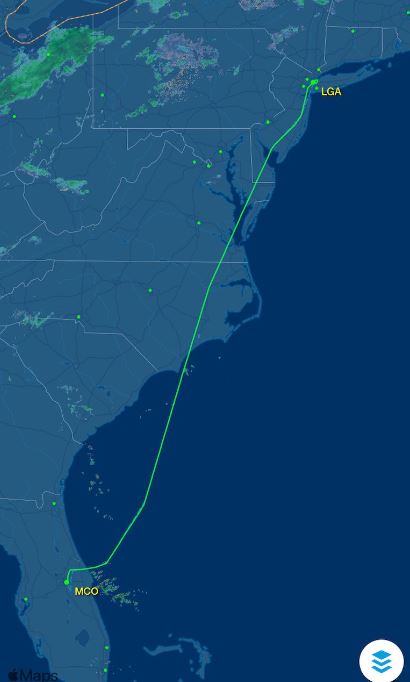 On the post meal drinks round I opted to try the tequila and margarita mix and, for a drinks mix with the base spirit dumped in, it was rather pleasant indeed and I may have enjoyed a second a little further downroute. 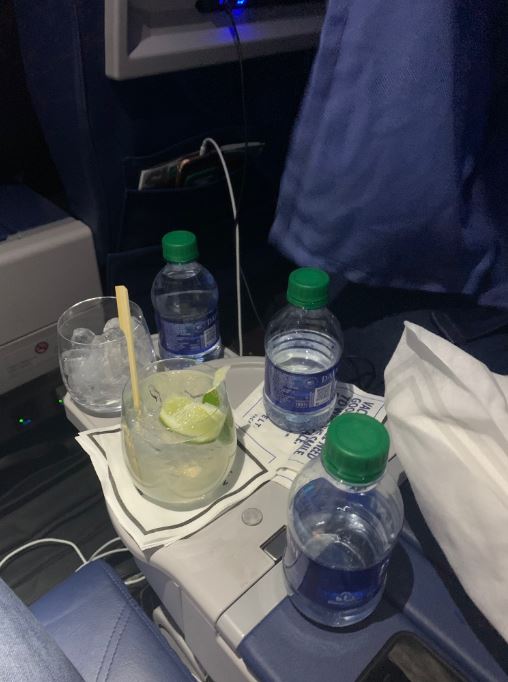 The IFE certainly seemed to speed the time aloft up and it wasn’t too long before it seemed as though we were beginning our initial descent. The only occurrence of note in the cabin was when a passenger tried to push the galley cart aside to access the toilet, not realizing what they were doing!
The descent began whilst we were still out over the Atlantic before turning due west, tracking north of the Kennedy Space Center complex. Just one more turn and we were lined up ready for arrival onto 17L, the easternmost runway at MCO, and rather convenient for Delta’s operation. Within five minutes of touchdown we were on gate 74 and into the quiet terminal for the train ride over to collect our awaiting rental car…

Overall: So I was rather impressed with our Delta flight…however, the ground experience was certainly rather meh. There’s a world of difference between the Flagship Check-In and Flagship Lounge at JFK (admittedly oneworld Emerald benefits) and the Delta equivalent at LaGuardia! I have used DL’s Skyclub at JFK Terminal 4 and whilst better it falls pretty far off my usual JFK AA experiences.

Once onboard the differences are more slight with DL’s hard product slightly trumping the AA equivalent on the basis of the supreme IFE content, albeit with a slight tradeoff for legroom. Soft product is a little trickier, at least to compare on the basis of one flight. AA’s food can sometimes be of the equivalent standard I got on this Delta flight and when it doesn’t I always have some half decent bread or cookie(s) I can enjoy to soften the blow. If I ended up with garbage food I’d be less happy on Delta than AA. Crews can obviously vary and this crew were decent, albeit not outstanding, no complaints there.

With AA as good as withdrawn from the NYC-MCO non-stop market Delta certainly fills the gap nicely. In the past I had mixed things up between connections on AA (a boon a couple of months ago when we got A330s with Envoy Suites on CLT-MCO-CLT) and Jetblue Even More Space. I'll certainly look to Delta more readily now when for convenience reasons non-stops are the only option.
"My first job was selling doors, door to door, that's a tough job innit" - Bill Bailey
Top

Thanks for the nice TR. Very interesting to see your AA/Delta comparison comment. But, having done BOS-MCO with B6 a few weeks ago (the MCY-BOS last week) in Y I can't really see a lot of value in first on the routes.
Top

Looks like you had a good trip with Delta. I don't know why there are so many knocks of Delta's domestic dining ... I agree with you, the food is always good in my eyes.

Thanks for sharing!
I love to fly!
Top
Post Reply