Did a recent Boys Weekend in Hobart. We organised it a few months back, Hobart was decided on when Tiger had a some deals going. $80 return from MEL-HBA was a pretty good deal, even though the fare didn't include checked luggage. 4 eventually became 2, as a couple of us had to pull out due to other commitments & illness.

Departure time was an early 7.15am, which meant having to get to Tullamarine at around 6.15 to account for parking in long term parking. In the end we got there around 6, a very easy 45 minute drive from the outer east.

For those unaware, Terminal 4 is the 'low cost' terminal used by Tiger & Jetstar. It also has the best F&B, and shopping facilities out of the 3 MEL domestic terminals, with plenty of outlets & space. Not hard when it was a new-build & not a rehash of a 50 year old design.

Given that we'd checked in online the night before & there were no bags to check in, it was a very quick security screening, and then there was time to grab a quick coffee & check out some overpriced sunnies at the Sunglass Hut... Luckily our gate was close to the retail area, and not one of the ones with a 15 minute walk....

At the gate, there was an agent enforcing the 7kg carry-on limit. They checked half of the waiting pax, then packed up & walked off!

The flight was on one of the ex VA 737's, with plenty of legroom. Flight time was around an hour, and before we knew it, we landed in HBA & were in an Uber to our hotel for the weekend..

After a somewhat boozy weekend, it was another Uber to HBA for our flight home..

After another quick screening, we were in the HBA departure lounge, which was packed to capacity. A pity as it looked like it had just gone through a refurb. Hopefully an expansion is in the works as it's badly needed. Didn't take any photos of the terminal, so this is why the below photo has hardly anyone in it! 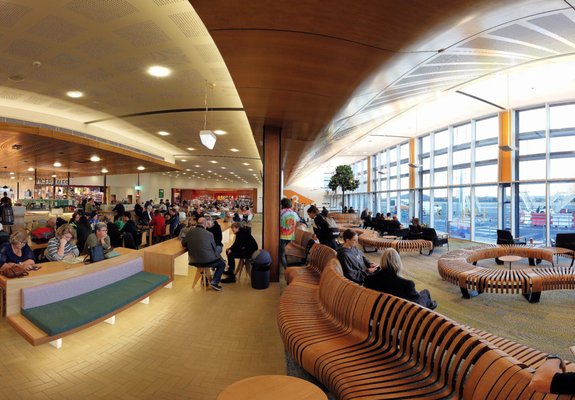 This flight was on an A320, which wasn't as roomy as the 737 we'd flown out on, but was OK for a short flight. Another quick flight of around an hour, with some turbulence thrown in!

Loads were good on both flights, looked to be full loads.

Would I fly Tiger again? Probably, though would have to be a good deal considering the lack of frills & inablilty to accrue FF points. But both flights were good, with friendly staff, so can't complain, especially for the price we paid.
Essendon - Whatever it takes......
Top
Post Reply