After our previous weekend’s foray with Delta out of LaGuardia it was back to a much more familiar experience, AA and JFK Terminal 8. We were dropped off by relatives shortly before 6pm, in plenty of time for our 8.30pm departure, however, with the Flagship First Dining experience and endless Krug Grand Cuvee to hand frankly we couldn’t have arrived too early! 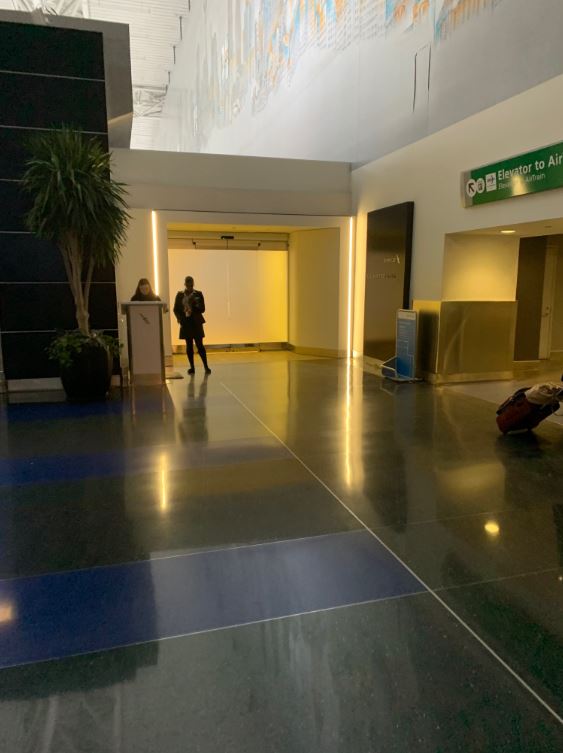 Premium transcontinental and longhaul international passengers in First Class have access to Flagship Check-In, which at JFK is conveniently located right next to the terminal’s entry. Two agents enquired about our destination and escorted us through the frosted glass doors to the empty check-in area. 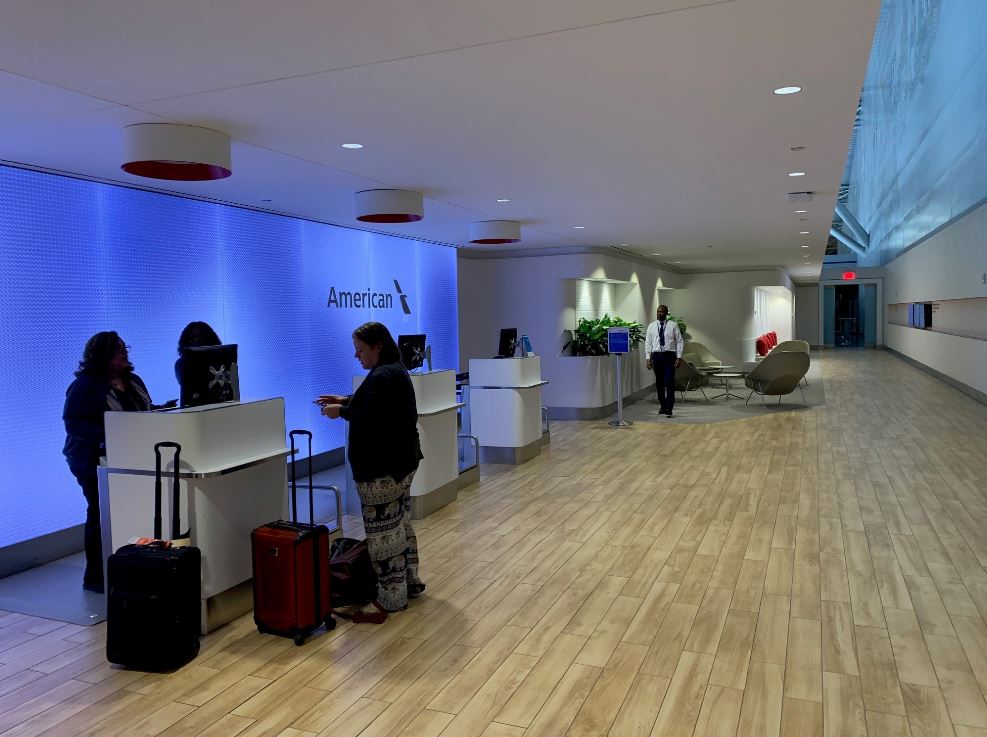 The friendly agent printed our boarding passes and directed us through to security. The Flagship Check-in conveniently dumps you at the head of the TSA PreCheck line, although in this case the TSO at the boarding pass check deliberately ignored us whilst waving about ten passengers forward. Oneworld Emeralds get to use the Flagship Check-in too and I had been escorted to the front of the line and dealt with immediately in such cases so standing there whilst passenger after passenger and one full flight crew contingent passed was a little frustrating. Nevertheless in the scheme of things we were only held up for a couple of minutes and the security line shuffled us through and it was still maybe five minutes from curbside to airside.

At the very familiar Flagship Lounge entrance the agent printed up our credentials and invitation for the Flagship First Dining section, a subset of the Flagship Lounge for international first class and premium transcontinental first class passengers. The Flagship Lounge itself was exceptionally busy, as it often is in the evenings, although the Dining section was a little haven of tranquility. With around half a dozen booths and about double that in separate tables it’s a nice little spot with food, beverage and service to match. Our waitress was superb, keeping me topped on nicely on Krug Grand Cuvee (yes, AA does serve one of the most expensive lounge champagnes of any airline in here and the three sister locations at LAX, DFW and MIA) and even noting that one of my choices for main course was one of her least favourite. It didn’t take much to sway me back to the filet mignon! 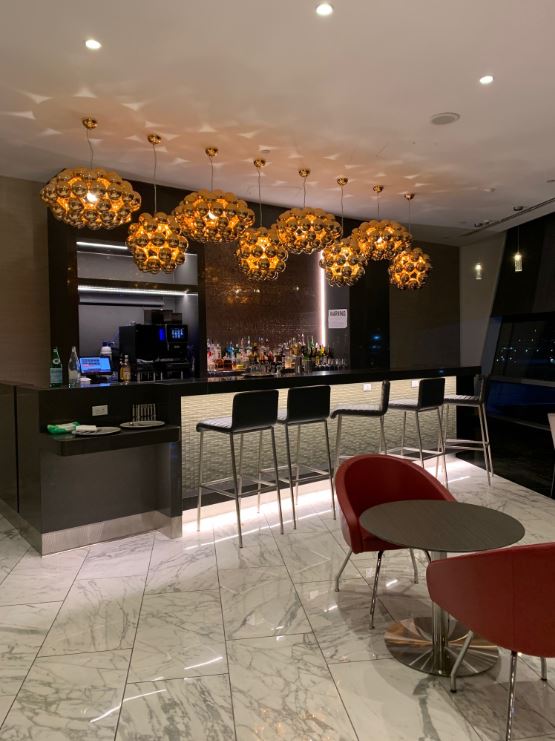 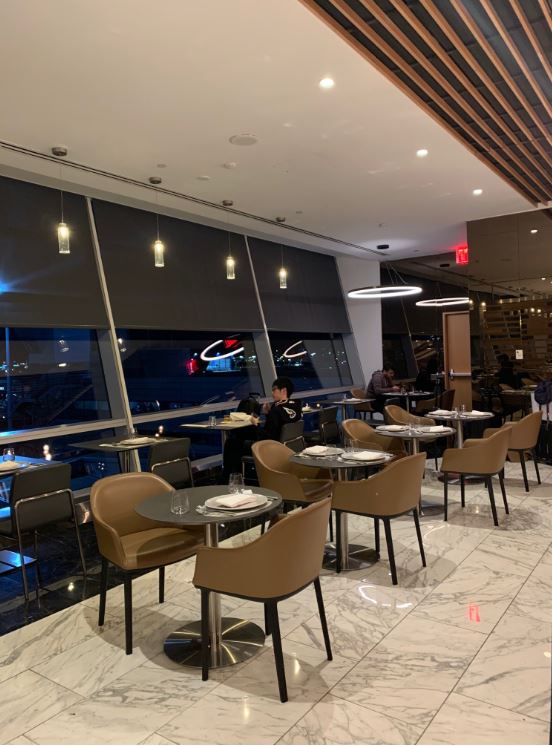 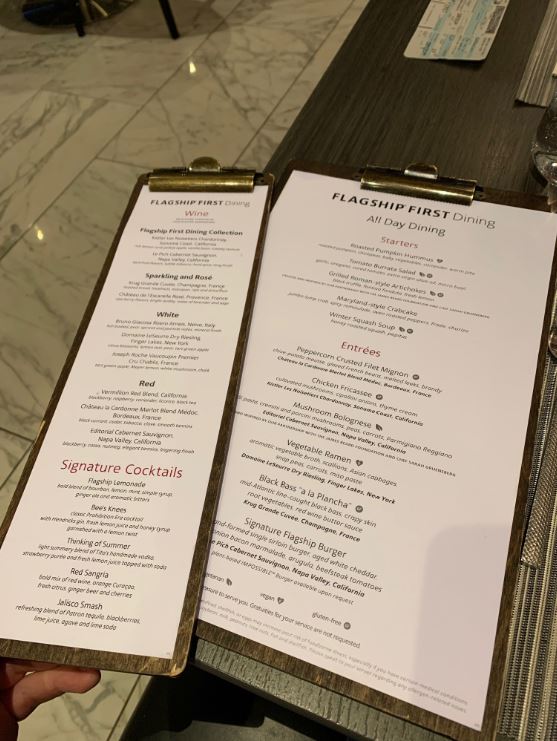 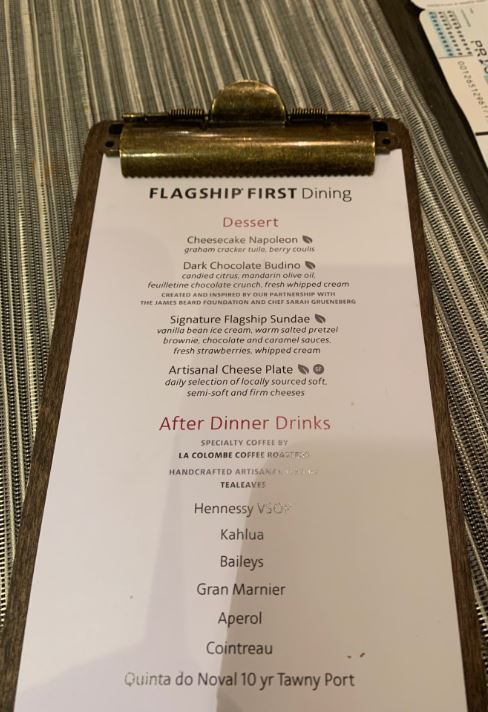 As the name suggests it is certainly more of a dining room setup than a lounge per se but it’s comfortable enough for a relaxed paced dining experience which this certainly is. The food itself was excellent, if anything I just wish there was more of it, although the waitress was happy to bring out as much as we wanted with my wife wanting to try multiple starters for example. The chocolate budino rounded off possibly one of the best lounge dining experiences anywhere, yes, pinch me, this is American Airlines! 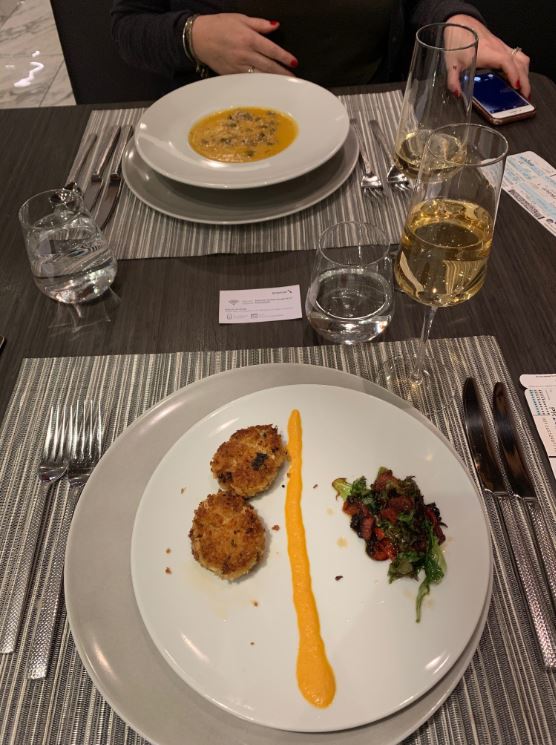 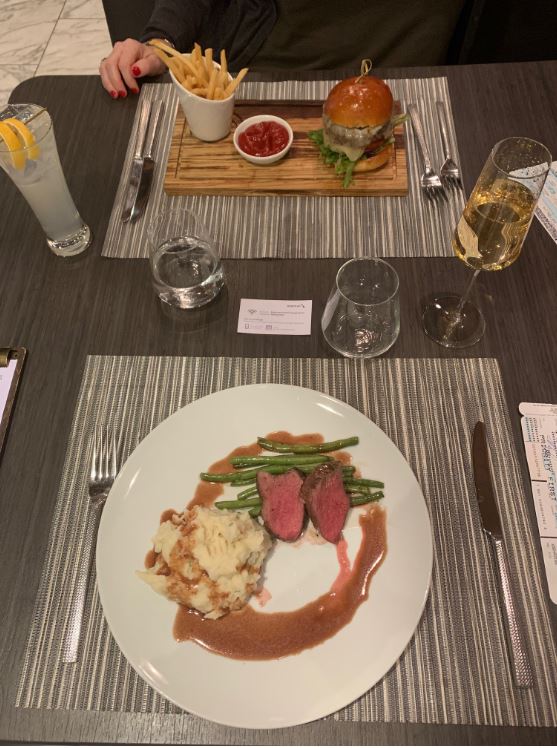 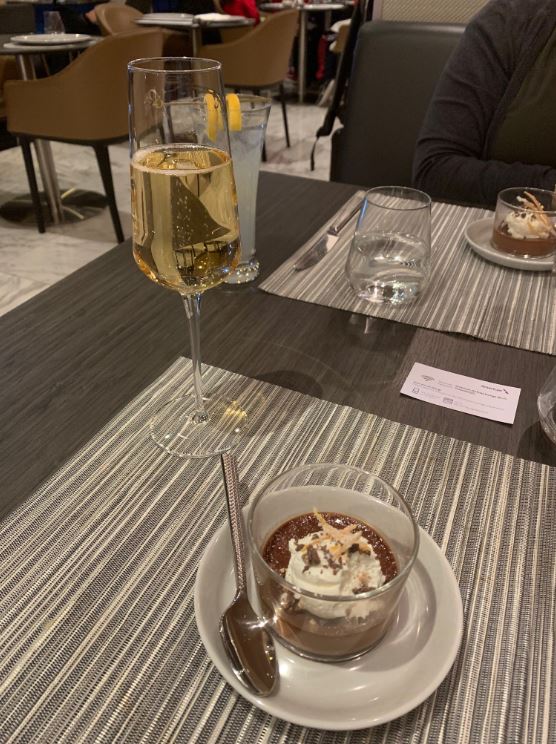 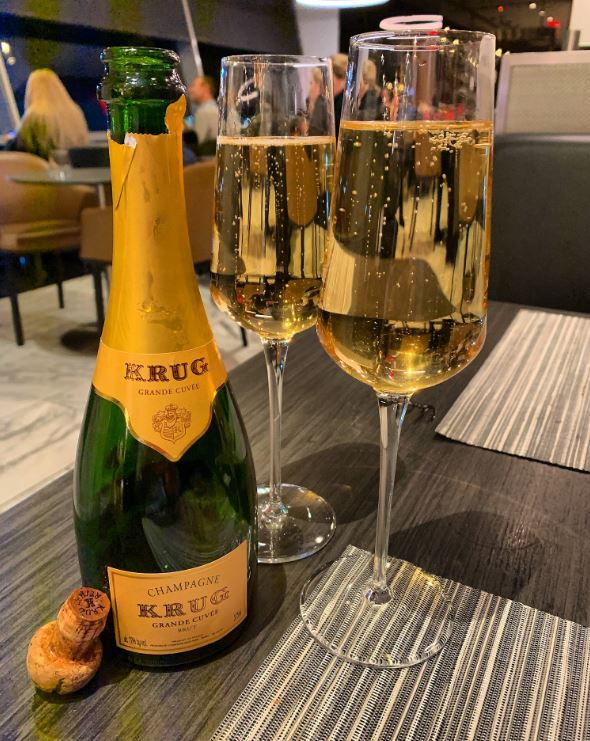 Although it was dark when we arrived the Flagship Lounge and the Dining section offer great views of the tarmac below but one of the most entertaining parts was the near constant flow of passenger denials. Sitting close to the entrance we could experience this first hand including the brazen attempts of one couple. The wife went ahead first and when the waitress asked for her invitation she said her husband had them and made a big stink about being eligible…almost too much of a stink. The waitress would only offer her water and then about ten minutes in whilst the wife was all too comfortable the husband arrived and lo and behold they weren’t on an eligible flight or class of travel! Out they went…

After putting away a few bottles of Krug (they were only half bottles!) we packed up and headed to gate 46, a short walk once through the tunnel to the satellite concourse. 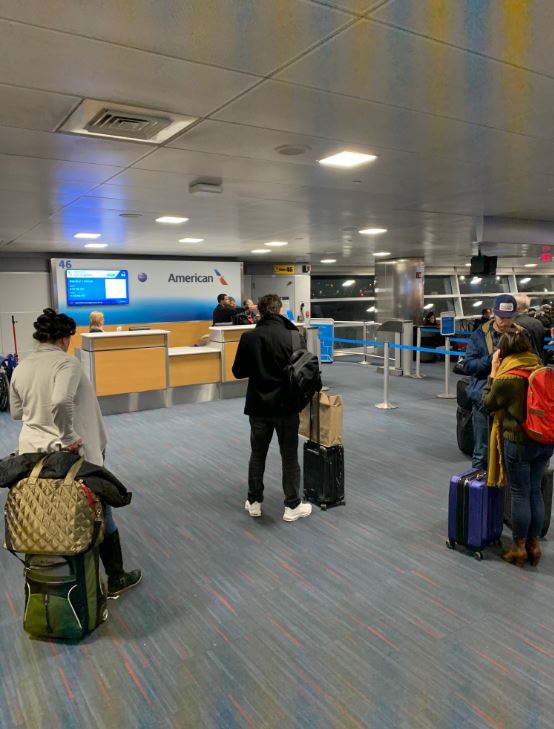 A group was stood back a little from the Priority line watching as the countdown to boarding ticked towards zero on the screen behind the gate agent. Two Concierge Keys were called forward by name which was a pretty clear sign boarding was due to begin and around five minutes after the posted boarding time we were down the jetway. 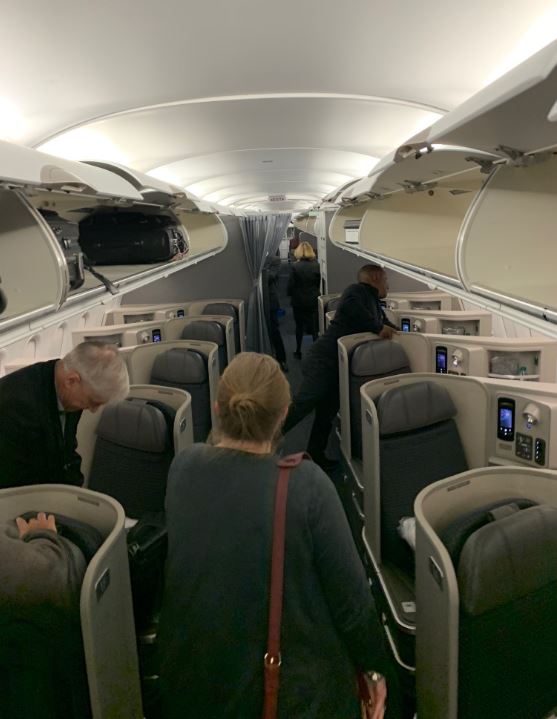 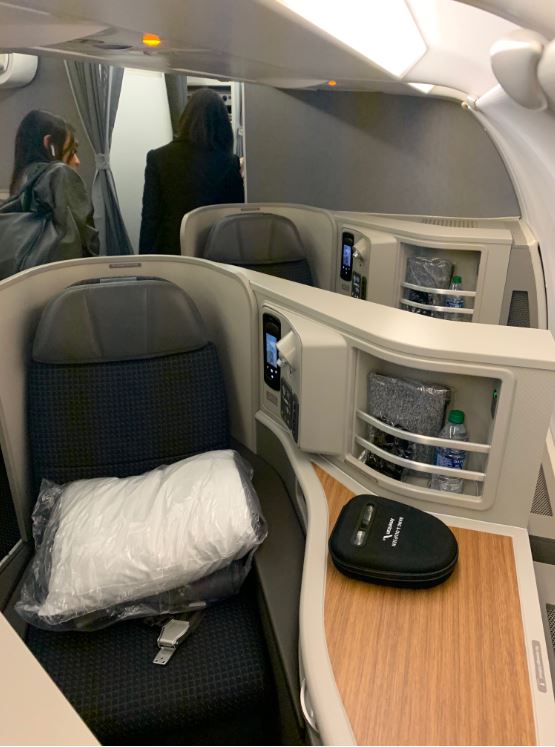 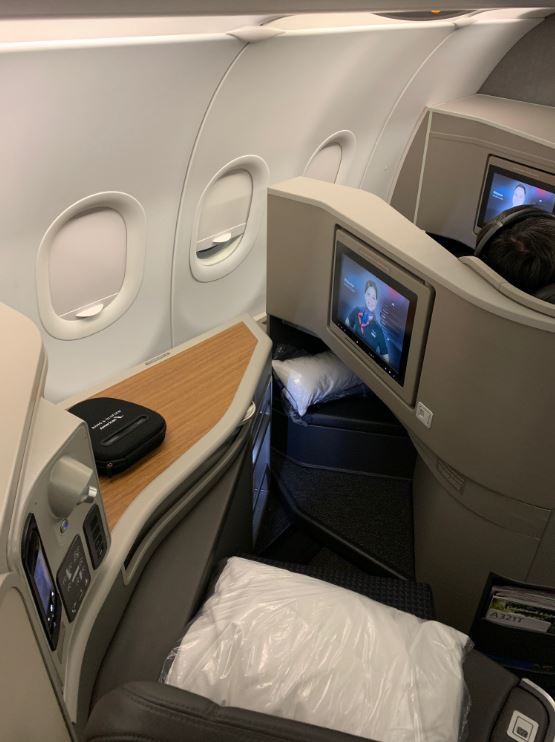 As is normal for me on longer flights, particularly those where I may sleep, I went and changed into something more comfortable and settled into 3A with my wife across the aisle in 3F. Pre-departure drinks were offered, where I chose the detox route of ice water. 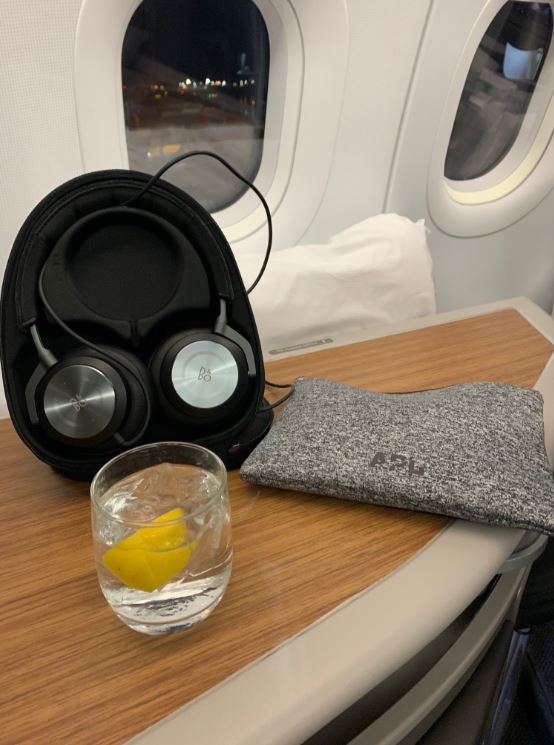 I perused the menu as the rest of the boarding was complete, an interesting note being that as this was an 8.30pm flight AA wouldn’t allow me to pre-order a meal, even though they do offer a pretty decent, albeit slightly abbreviated compared to earlier dinner flights, selection of food. The Bang & Olufsen headphones were offered as the boarding line thinned out and by 8.30pm, we were pushing back enroute to the departure runway of 4L.

The prepare cabin for departure announcements were made very shortly after pushing back and as we followed the other aircraft towards 4L we peeled off onto the Kilo Echo taxiway and shot off 31L as if to stick two fingers up to waiting for departure on 4L! Incidentally this very same thing has happened on my last three AA flights in the past couple of months.

With the 10,000ft chime I reclined my seat back to a much more comfortable angle and broke out the Casper bedding, enjoying some Brooklyn Nine Nine silliness as I had done on my Qatar flights last year.

Meal orders were taken shortly thereafter with hot towels arriving seat side thirty minutes after departure. The abbreviated meal service meant that unlike the three course affairs these flights traditionally have everything was delivered in one hit, although as is the case with pretty much every American carrier’s meal service it began with, yes, you've guessed it, nuts. After having dried out a little from my KrugFest in the lounge I was now happy to switch back to champagne, despite the Deutz Classic Brut representing a bit of a downgrade compared to the lounge counterpart. 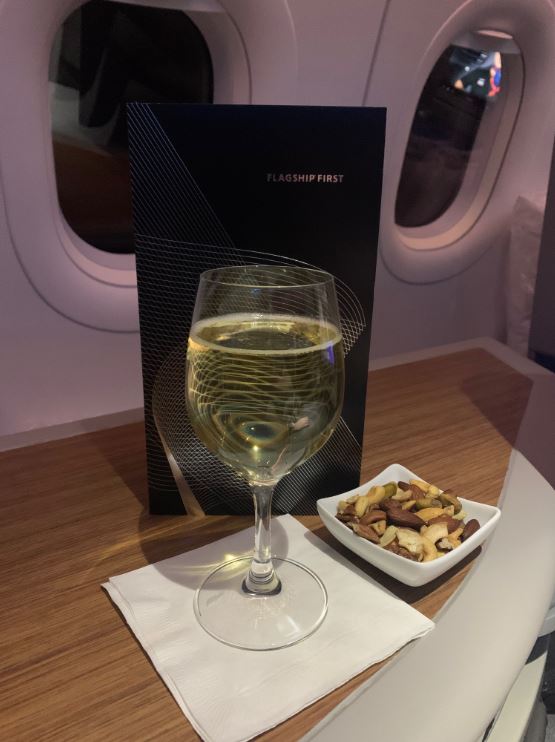 Although everything was delivered in one go I still my worked my way through it in some logical order starting with the salad-esque dish in the corner that the menu referred to as “Roasted Romas with assorted berries, tomato gelee, white balsamic dressing and Parmesan crisps”. It was definitely a little experimental but an interesting starter of sorts.

The Wagyu burger was…fine…nothing amazing and certainly not to the standard of the Flagship Signature Burgers offered in the Flagship First Dining sections but with the In-N-Out “Animal Style” sauce it was a lot better than it could have been! 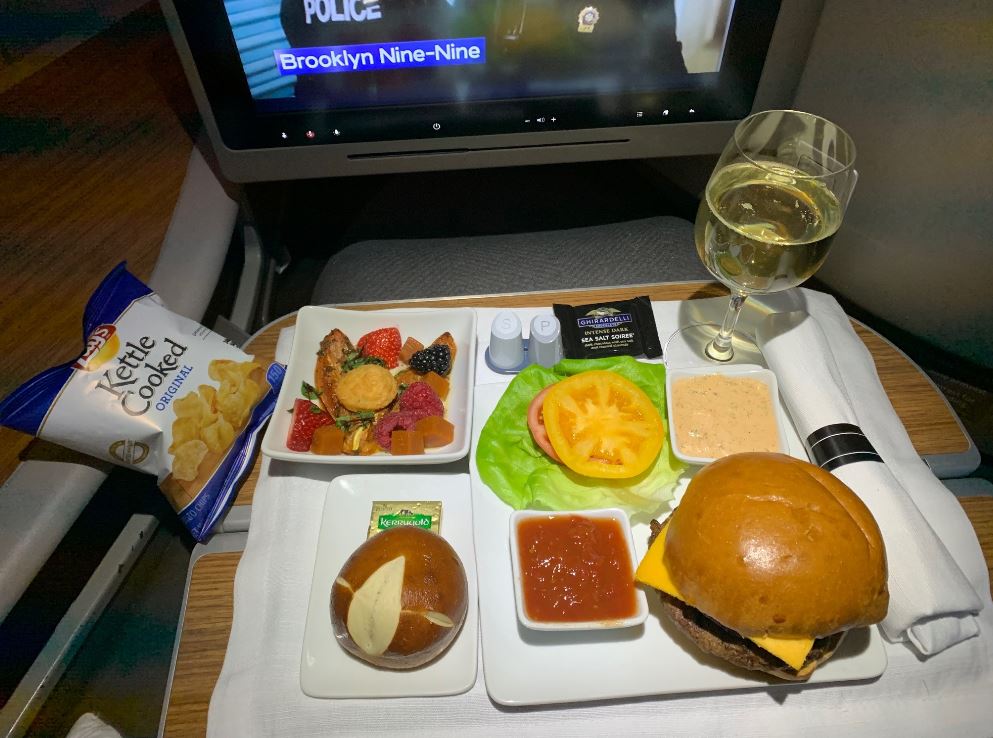 There was quite a gap in the service and my tray remains were not cleared away for some time although dessert was quickly proferred once the offending items had been whisked away. The inner child in me is unable to turn down the made to order sundaes and this flight was no exception, and neither was the way I requested it…everything but the nuts. 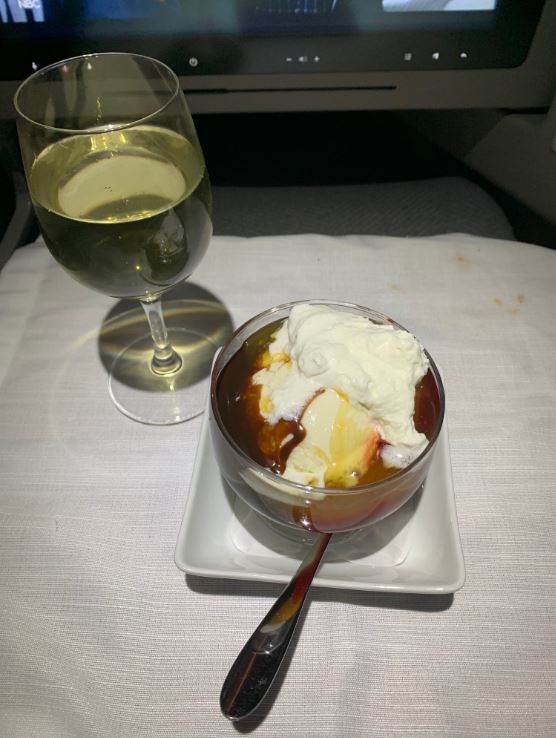 By the time I’d sent a couple more champagnes packing we were near St Louis and it seemed a good time to take advantage of the almost 7ft bed Flagship First offers. All tucked up under the Casper bedding I awake around an hour from landing, noticing one of the flight attendants gathering the headphones and almost taking my Bose QC15s instead of the provided Bang & Olufsens! 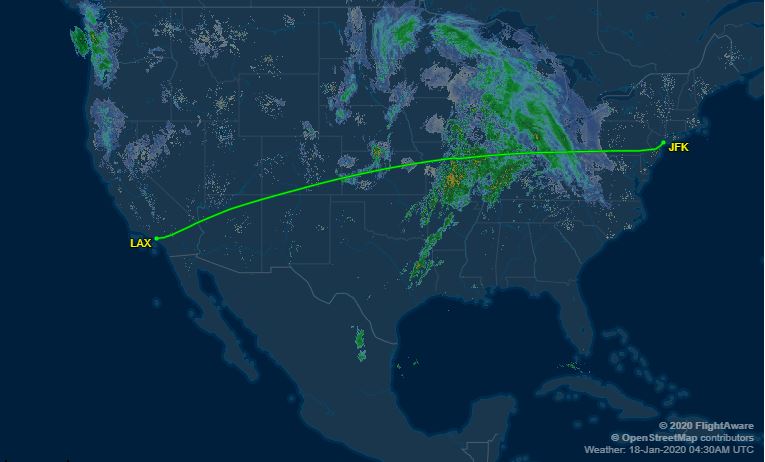 Abeam of Las Vegas seemed an appropriate time to go and change back into my regular clothes and freshen up with the anticipation of the pre-arrival snack. The anticipation built further and further as we descended through 20,000ft and beyond the point of no return for service as we entered the San Bernardino Valley joining the rest of the inbound traffic. Ho hum! 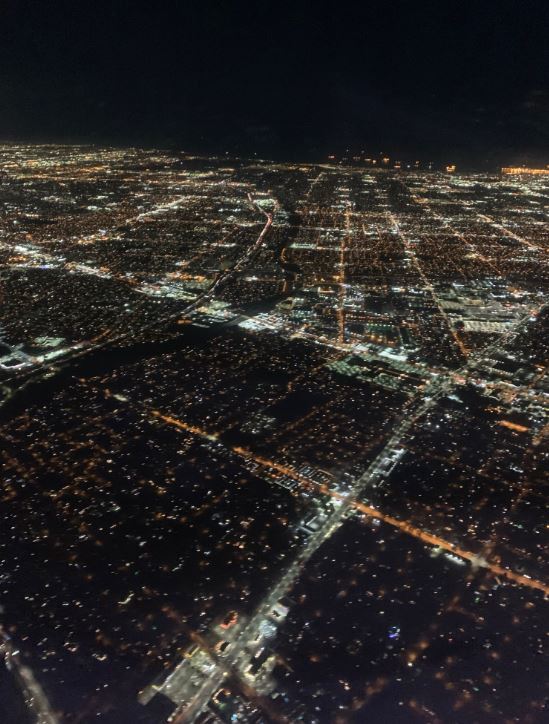 It was an amazingly clear night and you could easily make out parts of Orange County, at least with a little help from the inflight map, as we neared our destination. The final part of our descent onto 25L seemed pretty steep and some 5hrs 40mins after leaving the tarmac at JFK we were on California soil. As is often the case for 25L arrivals we had to wait for departures on 25R to pass before trundling over to Gate 47A at the end of the main Terminal 4 concourse. It was at this time that I received a message from our BlackLane driver saying he had confirmed our flight had landed and informed us he would meet us at the bottom of the escalator by baggage claim. Before the seatbelt was extinguished the prats from row 1 and 2 leapt to their feet and began removing bags before being admonished by the crew sat a few feet away forcing them to sheepishly retreat to their seats for the final few yards of the journey.

Thanks to Terminal 4’s compact nature it was only a couple of minutes from the door of the aircraft to our driver Evren who grabbed our bags for the walk across to the parking garage.
"My first job was selling doors, door to door, that's a tough job innit" - Bill Bailey
Top
Post Reply