My emptiest flight to date: BOS-ATL with Southwest

Welcome to my latest trip report--which will likely be a lot shorter than my previous ones! On a Sunday in April 2019, I needed to make an urgent day trip to Boston to visit my elderly great uncle, after his condition took a turn for the worse. Because I booked my tickets only a few days in advance, the nonstop ATL-BOS morning flight was incredibly expensive, so I booked an outbound leg with a layover in Milwaukee, which would get me to Boston by early afternoon. I would then catch the late night flight back to Atlanta, which will be the focus of this report.

I arrived at ATL around 7:30am for my 9am flight to Milwaukee. As I waited at the gate, I noticed that a 20 minute delay had been announced for my flight, which would reduce my already tight connection in MKE to a mere 25 minutes. For obvious reasons, I desperately needed to see my uncle in Boston that day, and I couldn't risk not making it there. I approached a customer service agent, explained my situation, and asked if I could be placed on standby for the nonstop flight to BOS, which coincidentally happened to be leaving only a few minutes later.

She kindly agreed, and about 15 minutes later I had a boarding pass for WN3813, nonstop service to Boston! I noticed that the gate area was quite empty, so imagined I'd have no trouble finding a window seat, but lots of thru pax from MSY were already onboard, leaving only aisle and middle seats available. There was a slight delay leaving ATL as we waited for some connecting pax from MCO, and we ended up arriving in BOS 25 minutes late, at 11:50am. 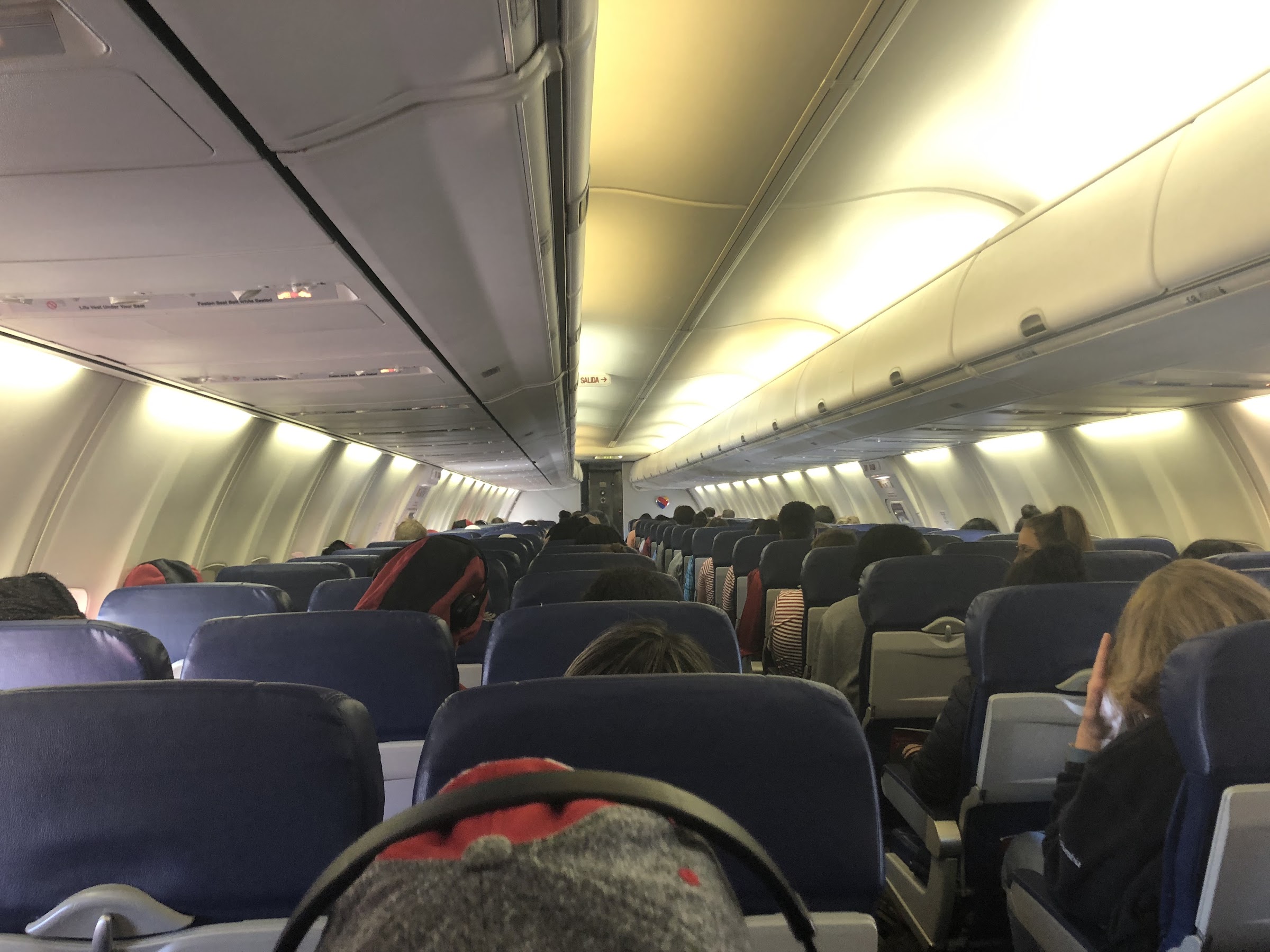 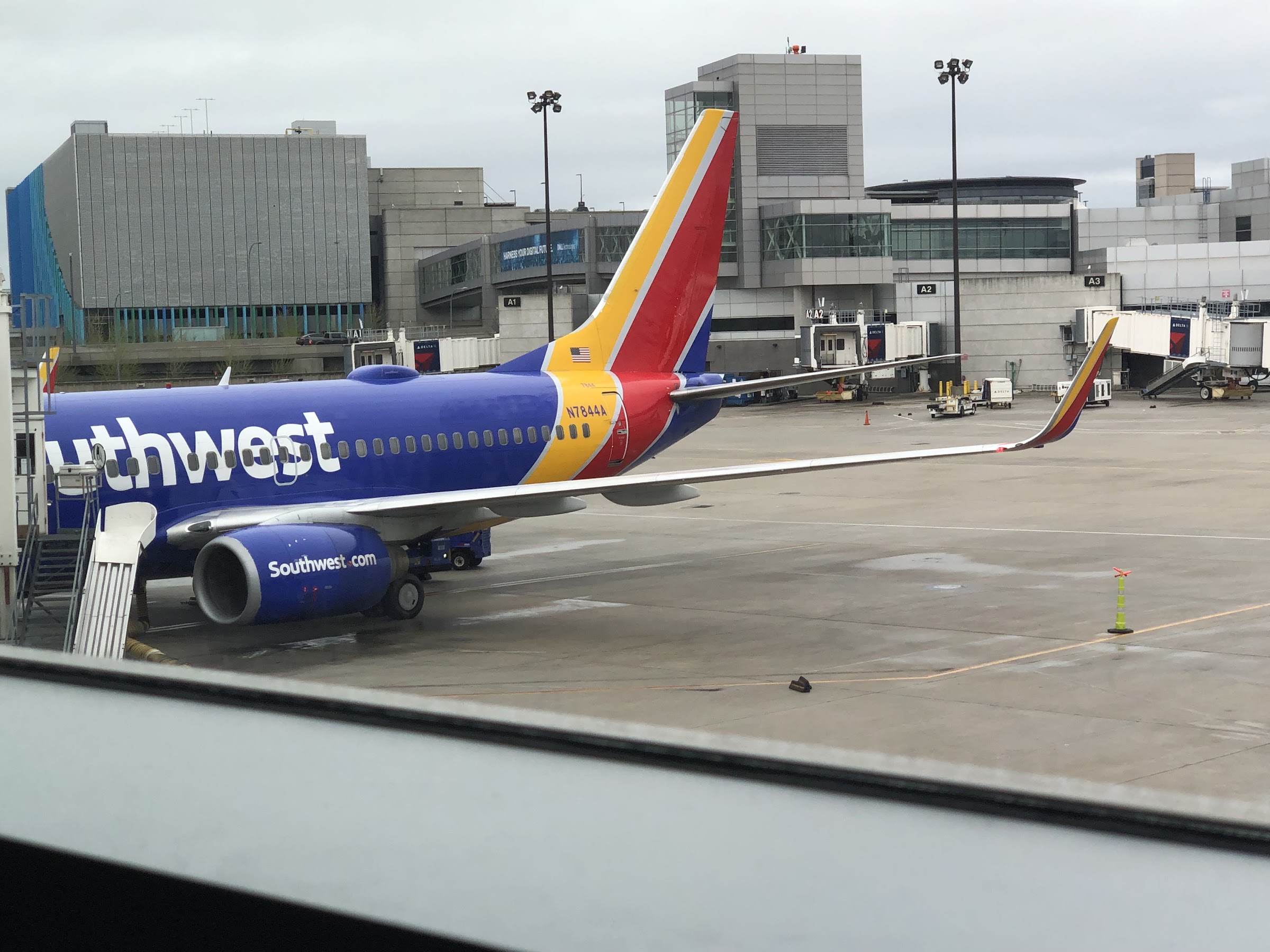 And that's how I got to Boston two hours earlier than planned while saving $300. Thanks Southwest!

I spent the afternoon with my mother by my great uncle's bedside. It was a short and emotional stay. My mother and I left his apartment around 6pm, then had a nice Korean dinner in downtown Boston. She would be staying in town a while longer, while I needed to return to Atlanta for college classes the next day. I left her at Kenmore station around 8pm, then took the subway & airport shuttle bus to Logan's Terminal A, where I arrived 40 minutes later.

The terminal was absolutely deserted, which struck me as quite odd for a Sunday evening. I was through TSA in less than 5 minutes, well in time for my flight's 9:45 boarding time. I made my way to gate A18, located in the satellite concourse across the ramp. There were just a few passengers spread out in the empty concourse (ours was the only flight out), so I already figured it would be a light load. There were a few WN agents sitting around the gate chatting about football scores.

I approached them and inquired about the number of empty seats.
"About 130."

WOW! For an aircraft with 143 seats, that IS a light load! I'm not sure of the exact pax count; I know it was somewhere between 12 and 17, corresponding to an 8-12% load factor... easily the emptiest flight I've ever been on.

The inbound arrived from BNA nice and early, and a full load of passengers deplaned. Our aircraft would be N478WN, an almost 15-year old 737-700 built and delivered to Southwest in 2004. Recently painted in the new livery, she would be taking me back to Atlanta on my 35th flight with Southwest. I unfortunately didn't get a picture, so here's one of her at LAX two weeks earlier:

A new cockpit crew boarded, and the gate agent explained that boarding would be ten minutes later than scheduled due to the exceptionally light load. The gate crew also joked around with us, announcing that all passengers in the C group were urgently requested to gate check their carry-on bags due to overhead bin storage limitations.

For those who don't get the joke: Southwest board by letter groups A, B, and C, and those with "C" boarding passes often don't find overhead bin space when a flight is full. On tonight's flight, we all had "A" boarding passes because of the light load, and bin space was definitely NOT an issue!

Boarding took a matter of seconds, and we were greeted by a very friendly crew enthusiastically yelling "You get a row! You get a row!" (à la Oprah) as we stepped onboard. All other passengers sat down in the first few rows (Southwest have free seating), while I made my way down to my favorite WN 737 seat (don't ask me why): 21F.

Boarding completed! The passenger nearest to me was around 10 rows ahead... 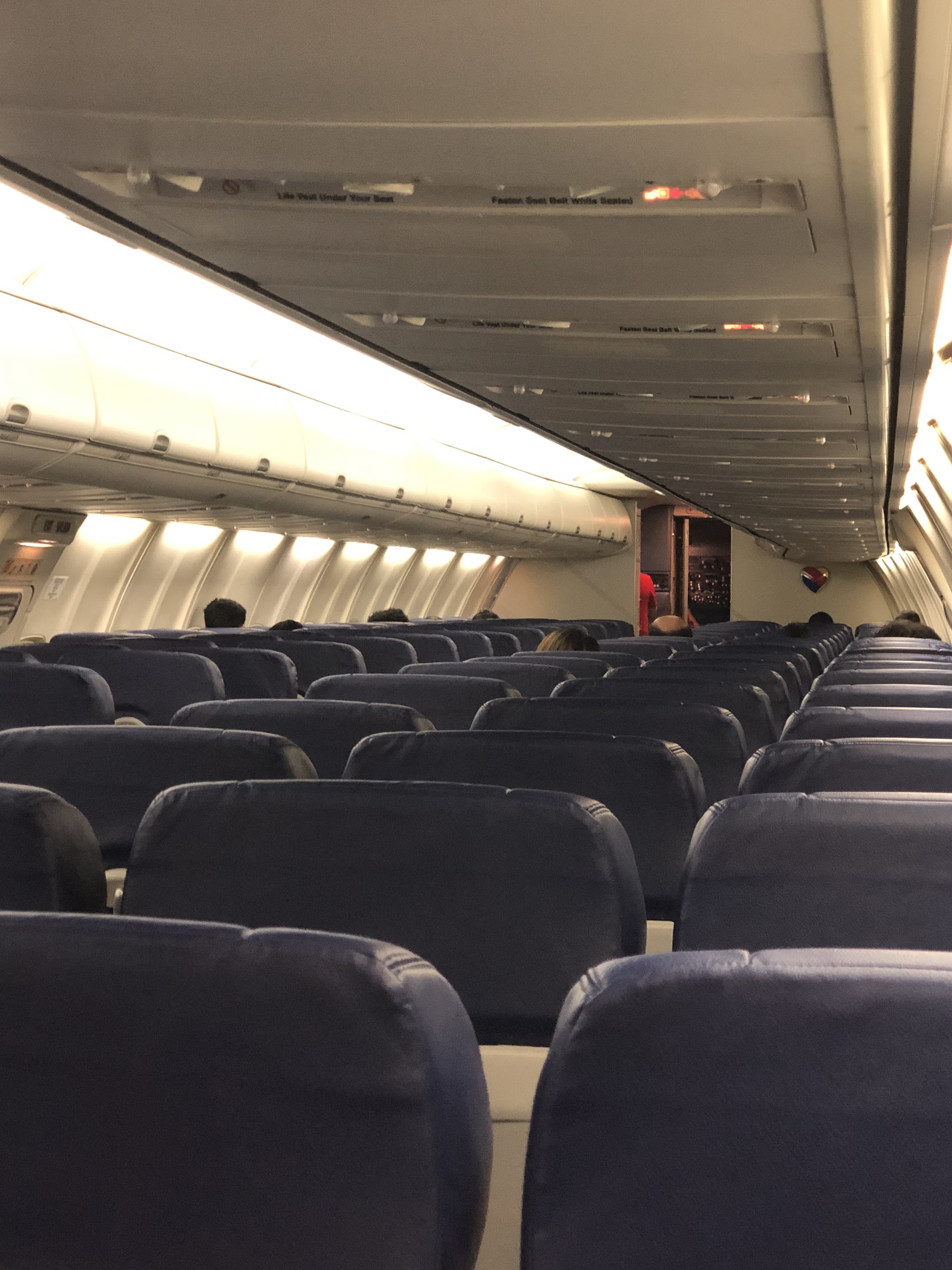 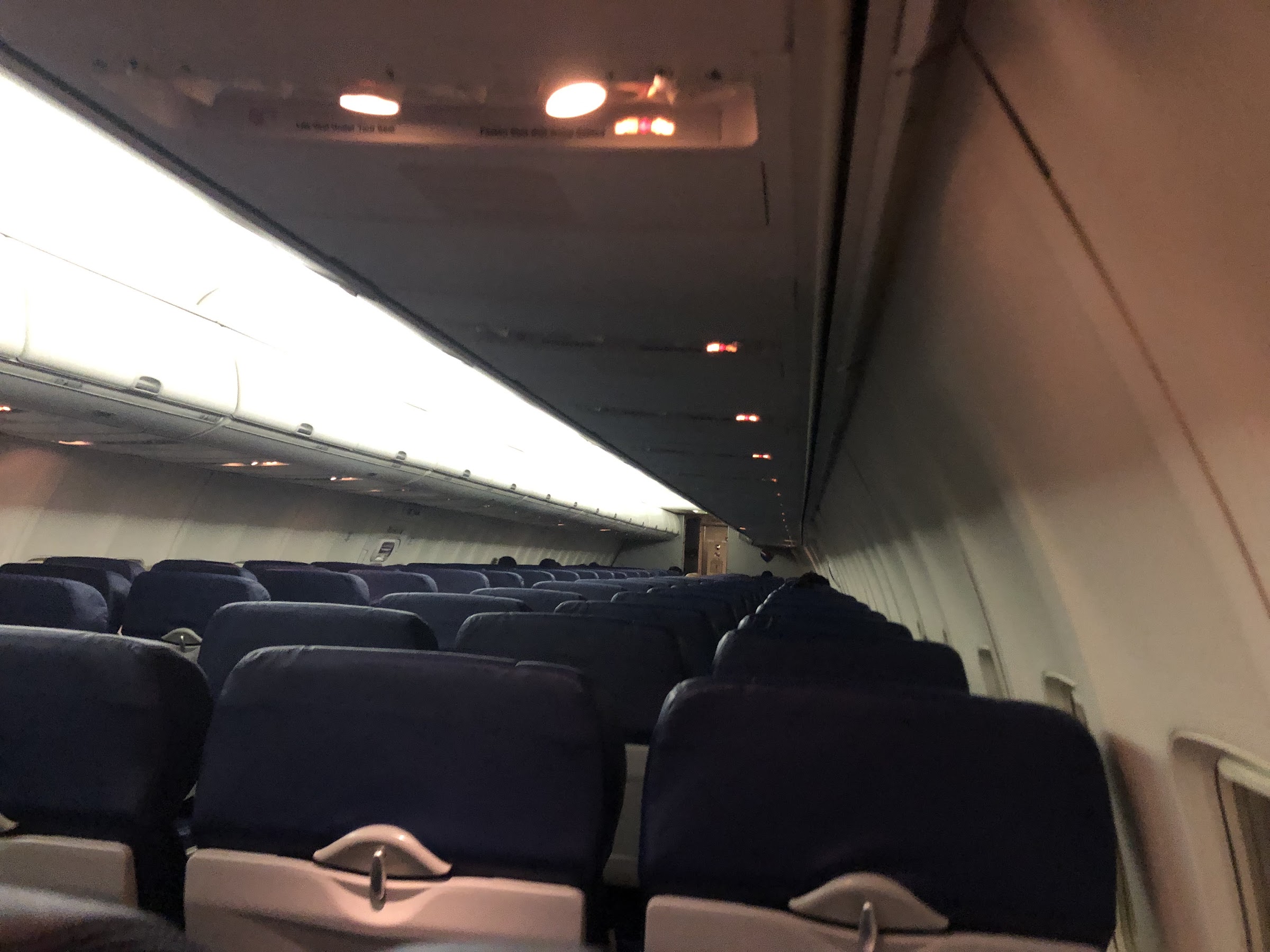 The captain made a brief announcement, predicting 2 hours and 16 minutes in the air with a bumpy ride as we passed NYC. Since I was the only one seated aft of the emergency exit, I got my own personal safety demonstration by the older female FA. After she finished, she said: "I hope you were paying attention because that was just for you!" I bought the standard $8 wifi pass, which worked very well as usual.

We pushed back at 10:07, eight minutes early, then taxied to runway 22R. I tuned LiveATC on my phone and followed along with our various taxi instructions. 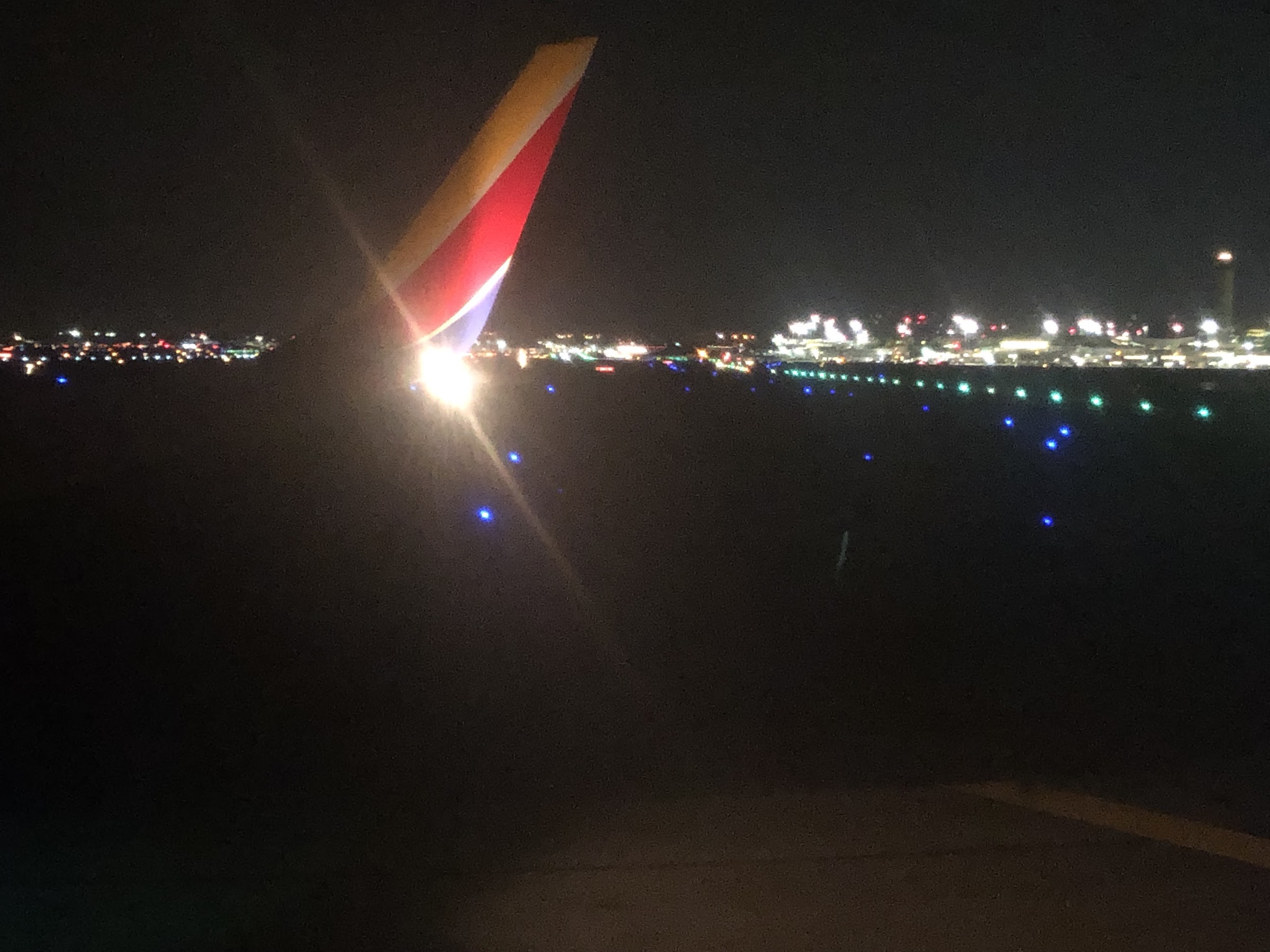 The cabin was plunged into darkness, the purser cheerfully announced "We've been cleared for departure, good night & sleep tight!", and we took to runway 22R for a southerly departure at 10:22. The takeoff was derated, but the roll was especially short given our light load, and the initial climb steeper than usual. There were some cool views of downtown Boston, too! I've compiled a video of the takeoff, views of the empty cabin, and landing, and attached it here!

We rocketed up at ~5000 feet per minute to 14,000 feet, briefly leveled off, then continued up to FL320, which we reached twelve minutes after lifting off. A few minutes later, we continued up to our final altitude of FL400. We experienced some light to moderate bumps during the climb; it smoothened out as we gained altitude. 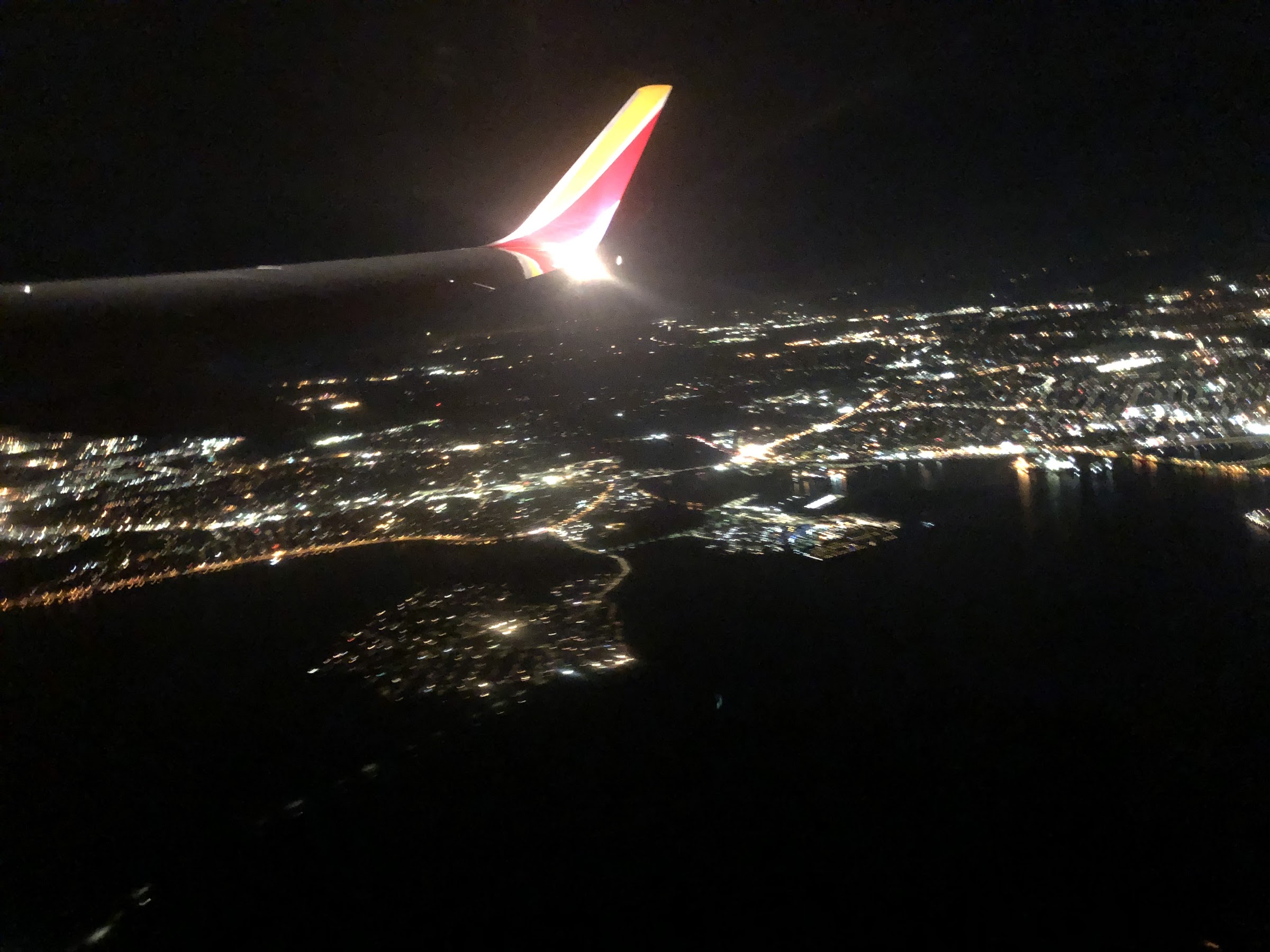 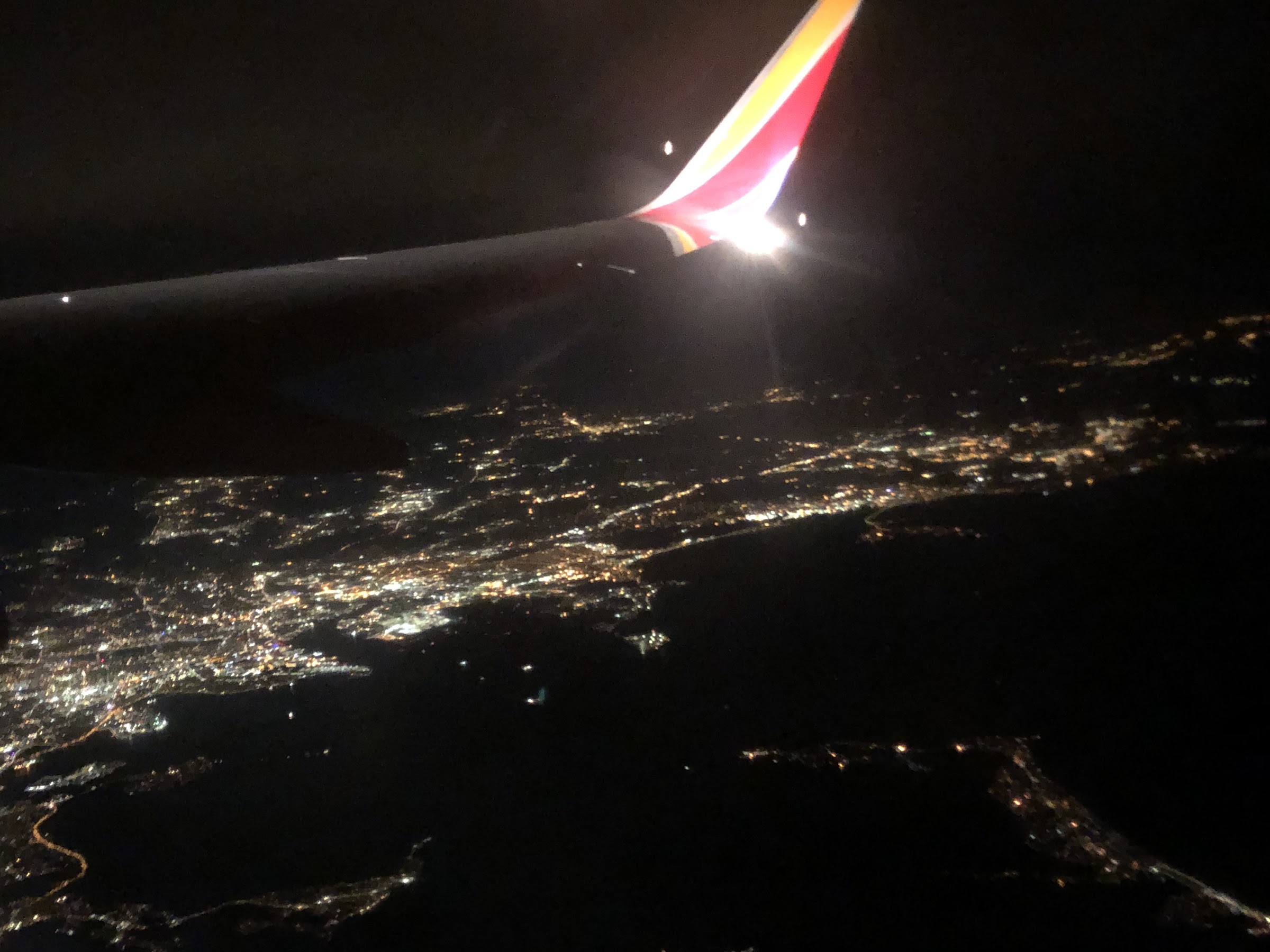 Boston! Logan airport is barely visible on the right side of the frame. 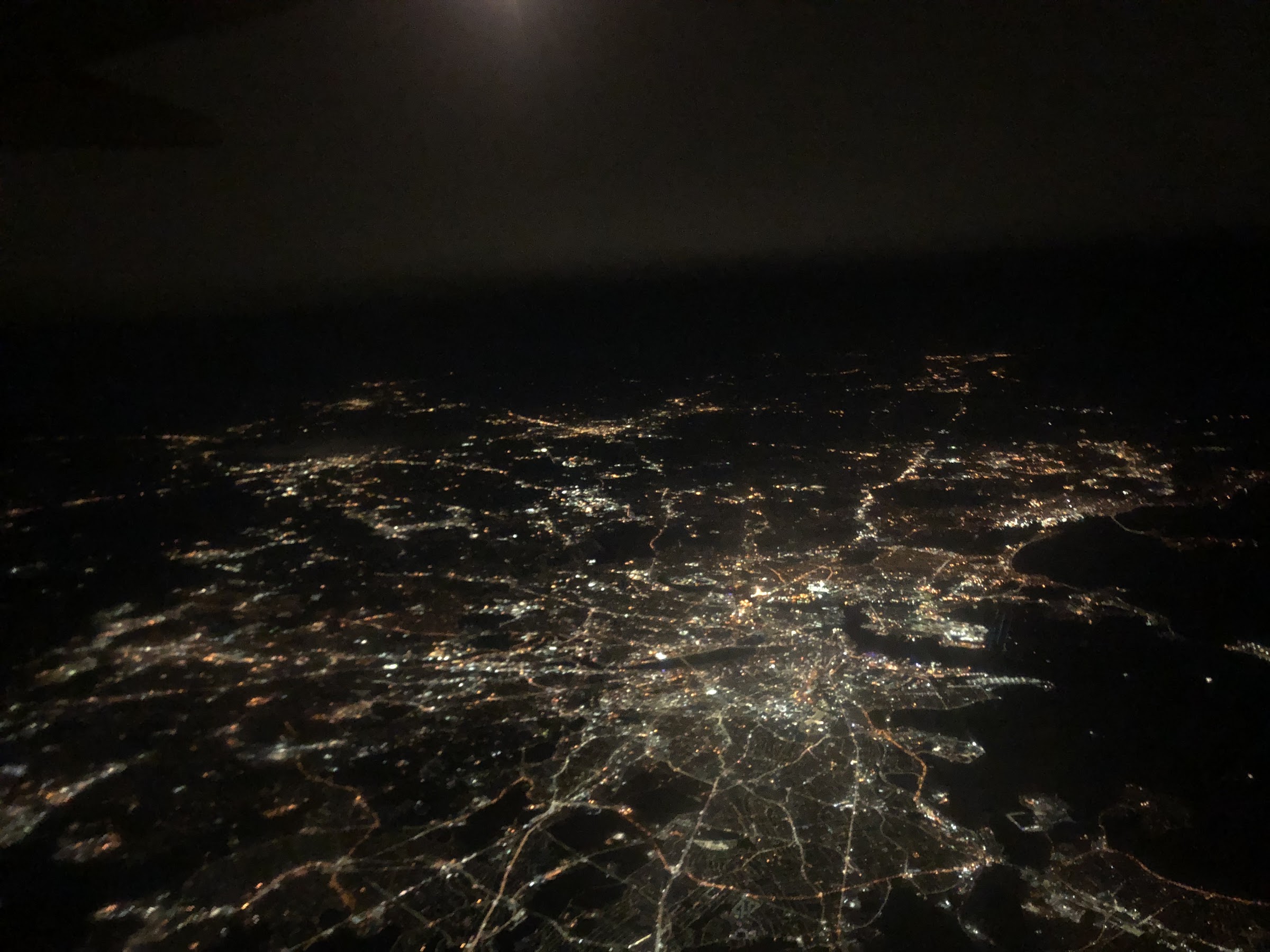 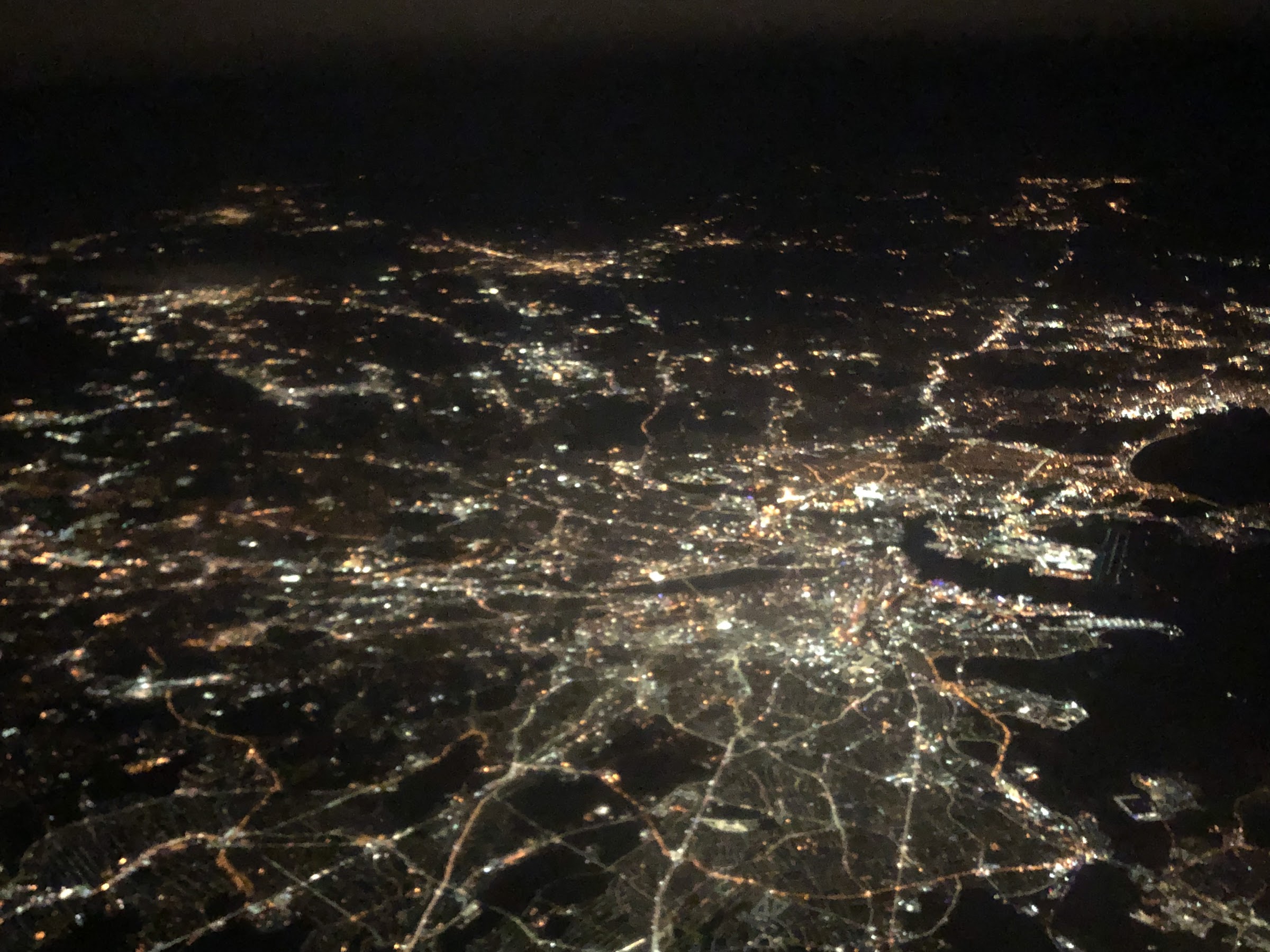 Snack and drink service soon began, and I was handed crackers, pretzels, and and a whole can of ginger ale (a rarity on Southwest). 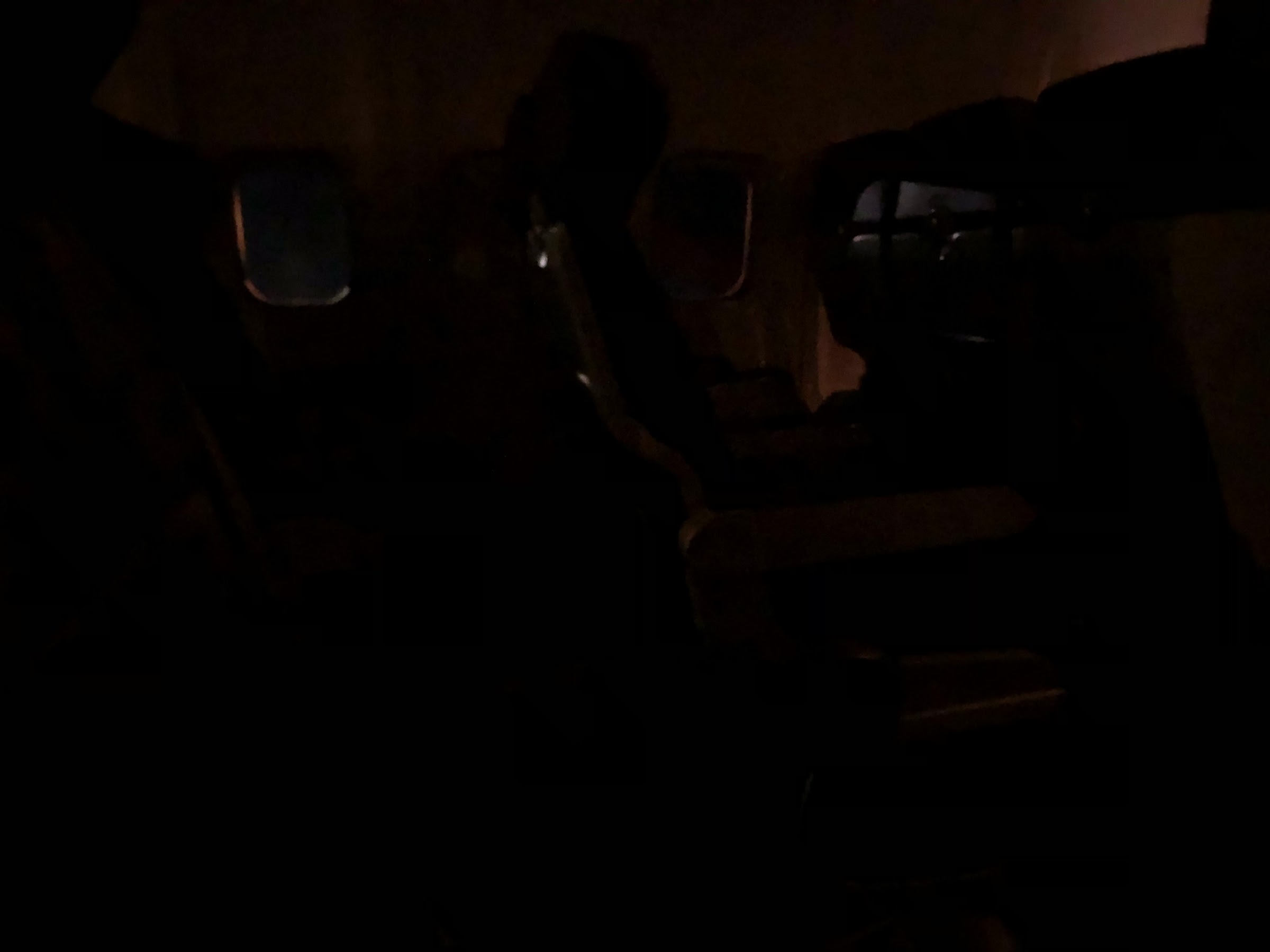 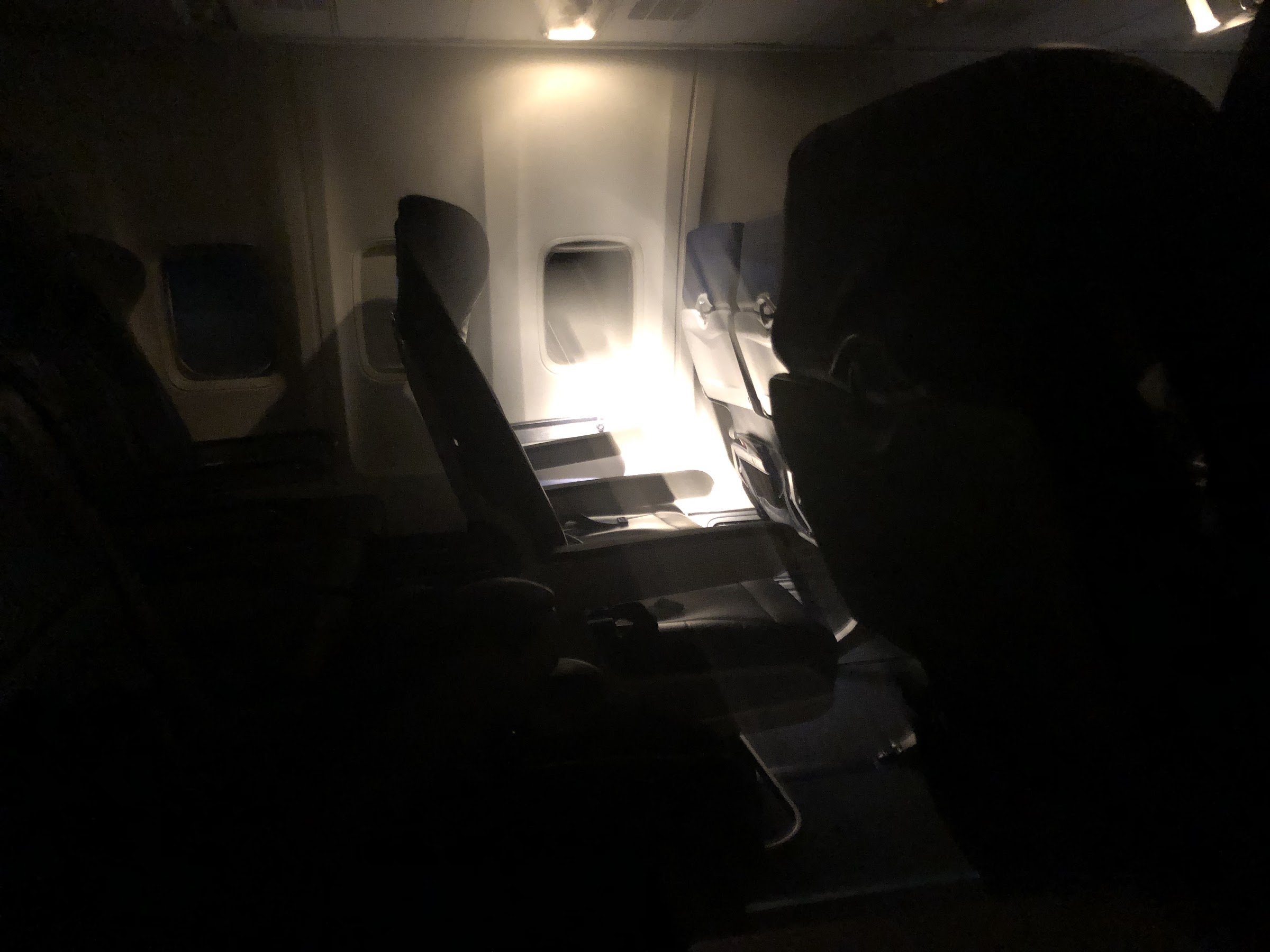 On my way back from the bathroom, I had a chat with an FA in the rear galley and asked him how often he experiences empty flights like this one. He said it was quite rare, and explained that the temporary fleet restructuring caused by the MAX situation generated flights that were scheduled purely to reposition aircraft. So, this unusually timed BOS-ATL Sunday evening trip is needed because the aircraft has to be in Atlanta anyway, hence the reason for abysmal load factors. Makes sense to me; I can't imagine a flight arriving in Atlanta after 1 o'clock on a Monday morning being particularly popular!

Anyway, shortly after I took this flight, Southwest reduced BOS-ATL service to just 1 round trip per day. As of this January, they've stopped the route altogether, which doesn't come as much of a surprise; Delta dominates the route with 10-11 daily frequencies, and the LCC market is well-covered by Spirit and JetBlue.

After cruising for 1h20min, we started a leisurely descent towards Atlanta at 11:59pm, and joined the standard OZZZI1 arrival from the northeast. 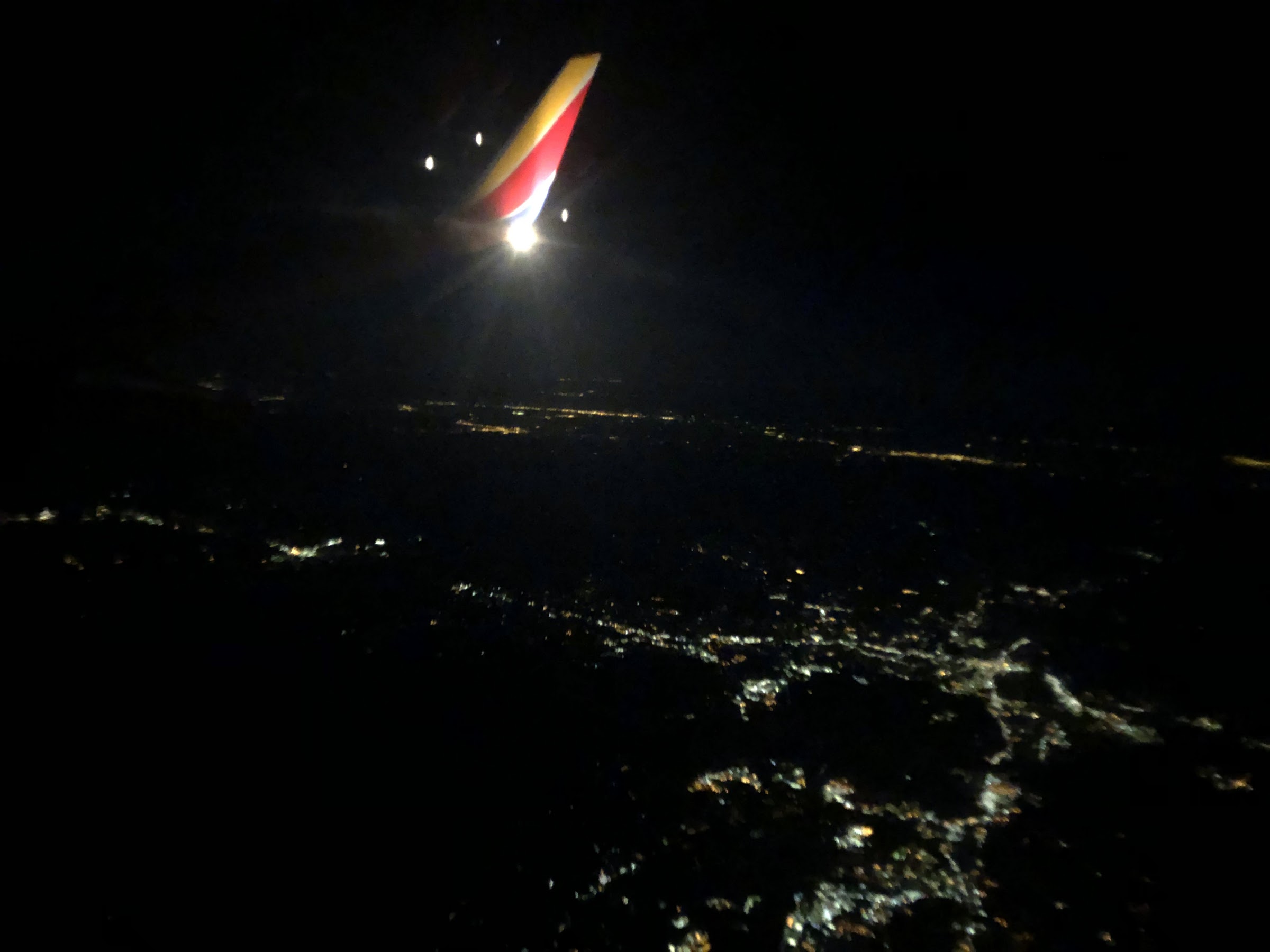 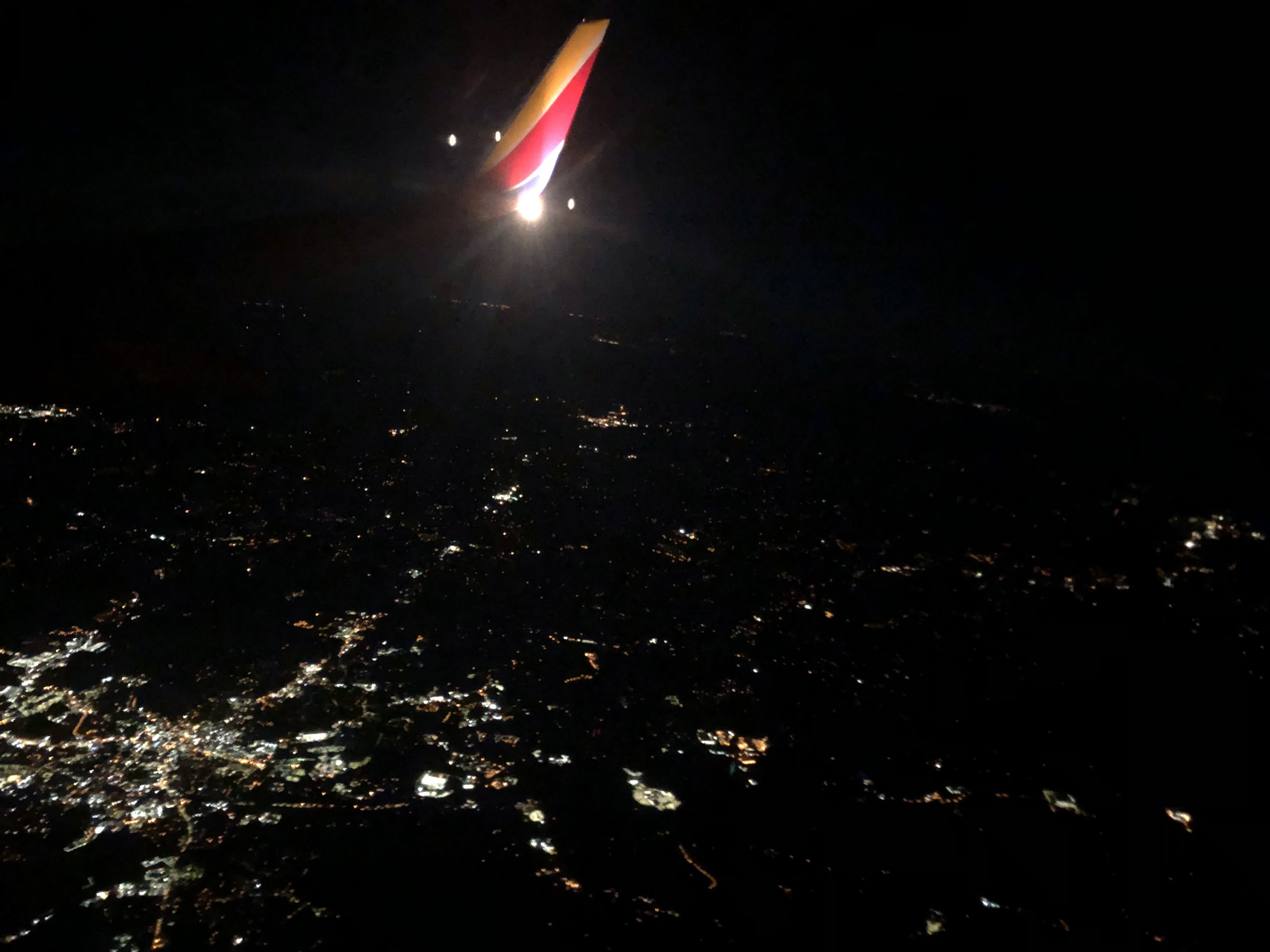 I listened to the Atlanta ATIS frequency, which broadcast that runway 26R (the typical landing runway from the north) was closed. Sure enough, we set up for a visual approach to 26L, which is strictly reserved for departures under normal circumstances.

It was a crystal clear night back in Atlanta 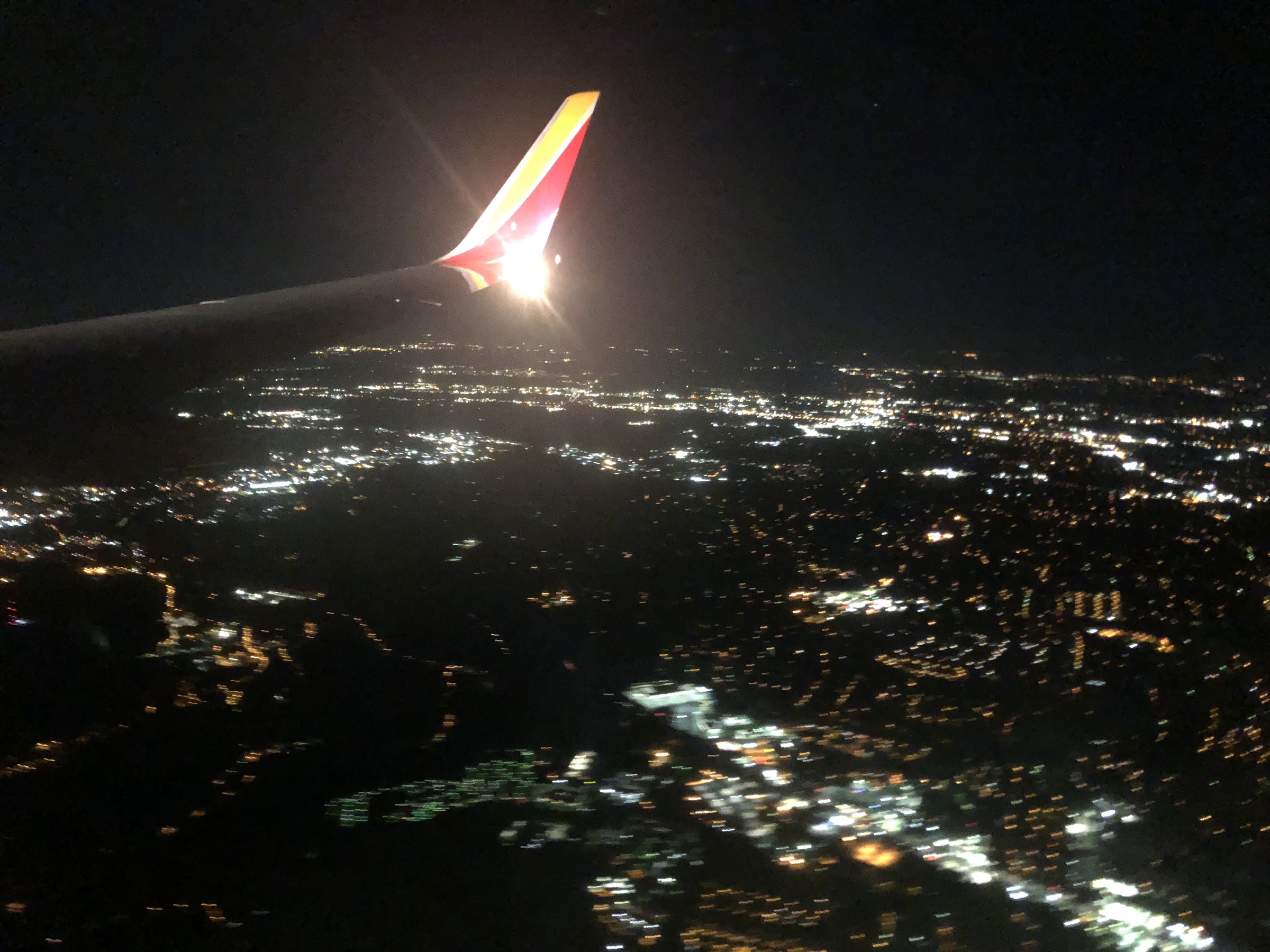 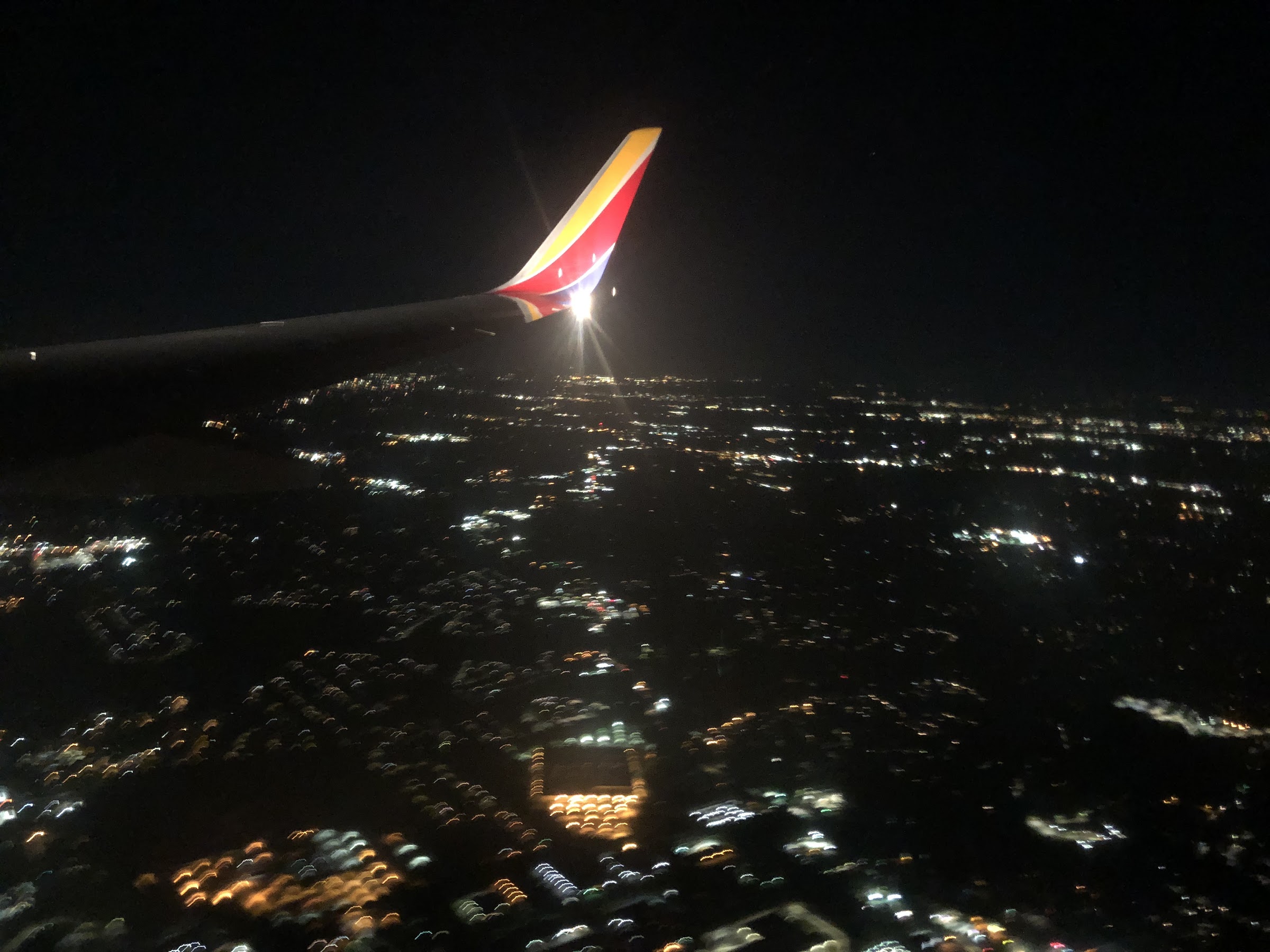 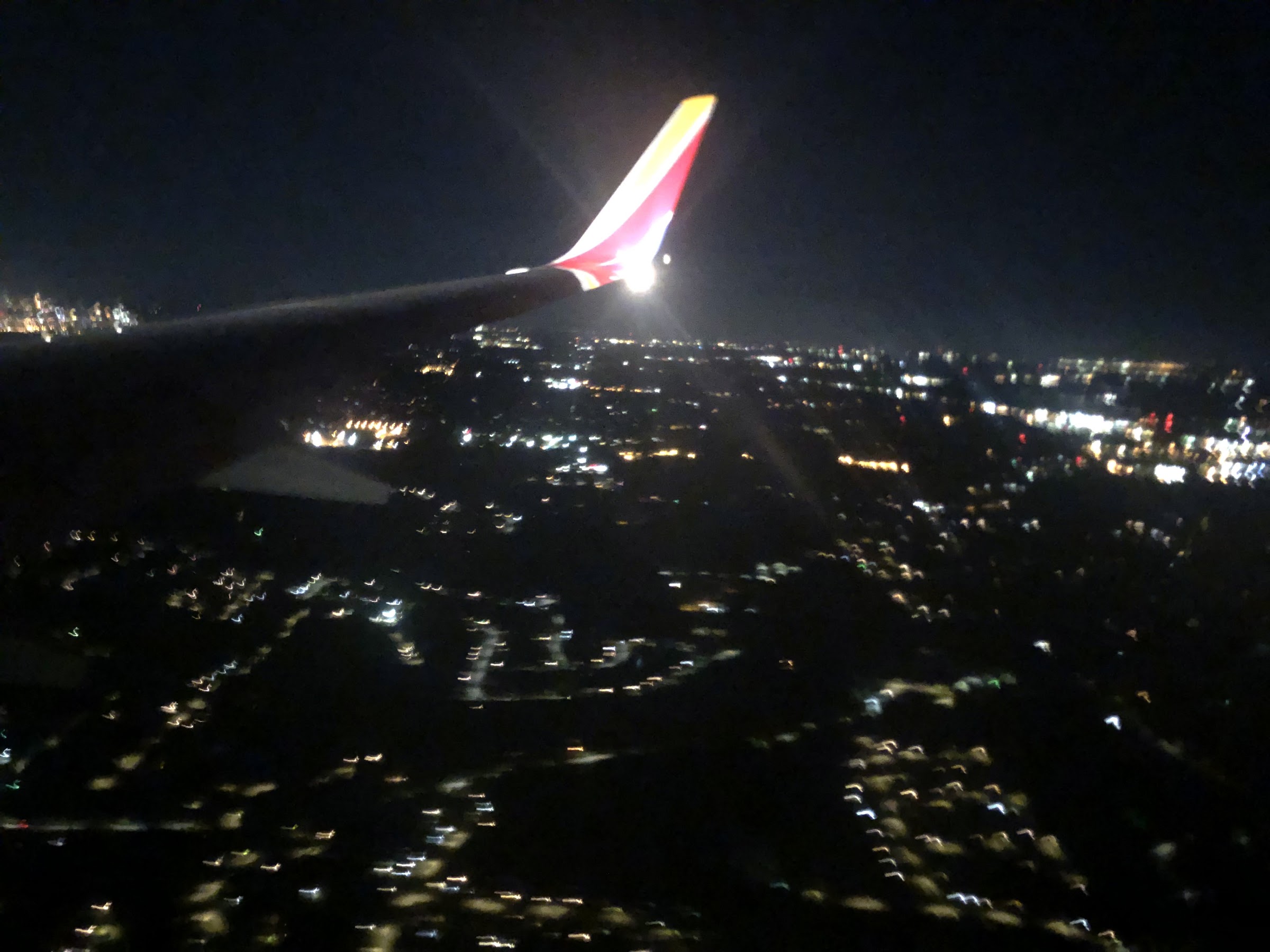 At twenty-seven minutes past midnight, our empty 737 kissed the concrete on 26L after a flying time of 2h05min, and 14h47min since I had left Atlanta the previous morning. You can watch the landing here.

The FA wasted no time in welcoming us to Hotlanta (I was convinced than no one actually called Atlanta that, but Southwest proved me wrong!). We rolled all the way down to ramp 3, then taxied straight into gate C6, where we docked at 12:31am, 39 minutes early!

An empty C concourse late at night. In just a few hours' time, N478WN would continue on to Austin, TX. An open secret about ATL: if you're arriving on a domestic flight, don't have any bags to claim, and need to take an Uber or Lyft, you can avoid a tedious walk through an outdoor parking garage by catching the underground Plane Train in the "wrong direction" to the international arrivals area and having your ride meet you there. It will pick you up by the curb right next to the terminal, and you can wait inside until it arrives; unlike the domestic rideshare areas, which are far outdoors and often very crowded. This trick is especially useful in the winter months!

As usual, this was my strategy, and I started down the escalator towards the Plane Train headed away from the domestic arrivals area. My flight's crew was walking a distance behind me, and the FA I had chatted with earlier yelled "Wrong way!" I quickly assured him I knew where I was going. ATL is generally straightforward to navigate, but kudos to the Southwest crew for making sure I wasn't lost in a massive airport at an ungodly hour of the morning--I always appreciate small gestures like that! I was comfortably in an Uber well before 1 o'clock, and arrived home at 1:20, only ten minutes after my flight's scheduled arrival time.

My great uncle passed away in his sleep several days later at the age of 95. He lived a long and healthy life, and I'm so glad to have spent a final day with him while he was still lucid. This was a very important trip for me, and thanks to Southwest's faultless efficiency, it went as smoothly as it possibly could have. Thank you all for reading, and please feel free to share stories of your emptiest flights in the comments!

How a broken A220 made my day: LGA-BOS-LGA on Delta!
Best value across the Atlantic? TAP's A330-900neo: JFK-LIS-OSL
Oslo to Paris on a 767?! A rare treat with EuroAtlantic & Norwegian
Boutique Business Done Right: La Compagnie A321neo ORY-EWR

Re: My emptiest flight to date: BOS-ATL with Southwest!

I am very sorry to hear about your great uncle. Glad southwest was able to assist you in some small way.
"None are more hopelessly enslaved, than those who falsly believe they are free" -Goethe
Top
Post Reply