Background: Flying into the Future
During my senior year of college I am also applying to medical school. While the majority of the schools that I am applying to are within driving distance of my college in Albany, NY, 9 of them are far enough away that I would have to fly. The trip reports for this series will cover these schools. The number of trip reports that I write for this series will ultimately be variable based on how many of these further away interviews I attend and also based on how much time I have to put out these TR's. As always, feedback is appreciated, and the results of the interview will be posted in the comments once I find out. This third trip report covers my trip to Oakland University William Beaumont College of Medicine, which I thought would be my last medical school interview of the cycle (this honor has since been transferred to Quinnipiac in CT).

Booking
After getting my interview invite in early January, I decided to wait to hear back from all the schools that I had interviewed at prior to the winter holidays before booking this trip. A week later, after getting waitlisted at George Washington University School of Medicine (which is very common for them), I began to plan my second trip to Detroit in the span of a year. Due to the timing of my interview and the school's location in the outer suburbs of Detroit, I decided to just book round trip, nonstop flights on DL. While the return leg left me with a 5 hour wait between my interview and my flight to ALB, it made more sense to do that then risk missing a connection on the return, like I almost did during my last trip to DTW.

Online Check In
Exactly 24 hours prior to the flight I checked in via the DL app and downloaded my electronic boarding pass. As usual for me travelling solo, I did not have TSA precheck (which is annoying because anytime I'm travelling with parents I get it for free).

At the Airport
After having to park in one of the farthest away sections of ALB's long term parking area, I walked into the airport around 11:20 for my 12:28 flight to DTW. After dumping my water, I made my way towards the TSA, where there was almost no line for security. Unlike my previous trips, my lunch did not get flagged by the TSA, though I did have to get patted down because the bottoms of my pant legs were wet from the snow that I had to trudge through to reach the airport. Once I was through security I went and walked around and planespotted for a little bit, though there was almost nothing going on at the airport. While walking around I also searched for a plastic fork that I could steal, because I had left my travel fork in my apartment. 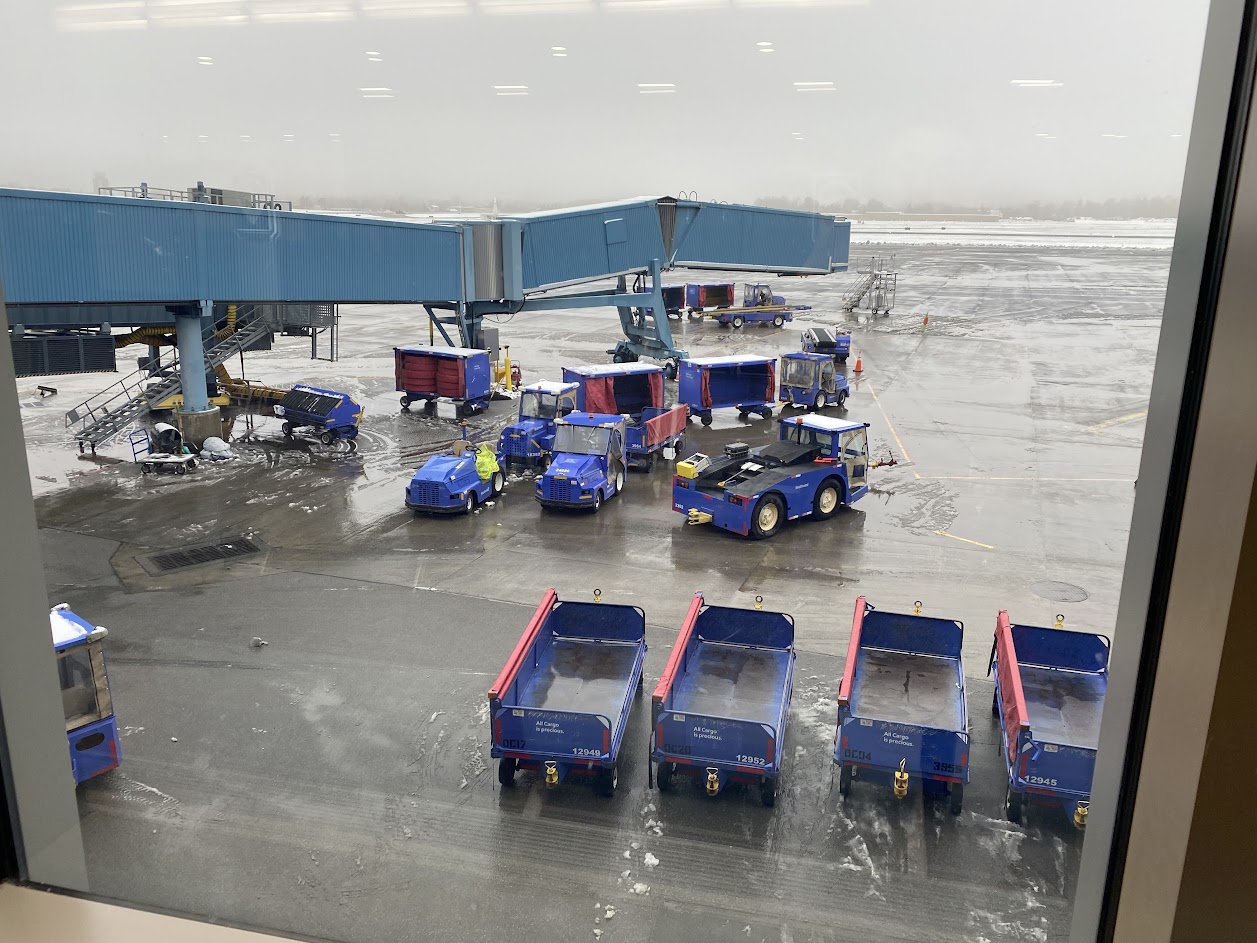 Once I finished my walk, I walked over to gate B5, where my flight would be departing from. Due to multiple cancelled and delayed AA flights, the gate area was overflowing with people, and I ended up having to sit at another nearby gate. Once I got settled in I began to review my primary and secondary (school specific) applications, so that I could just relax on the flight. At 11:47, the aircraft that would be operating my flight landed at ALB, and pulled into the gate a few minutes later. 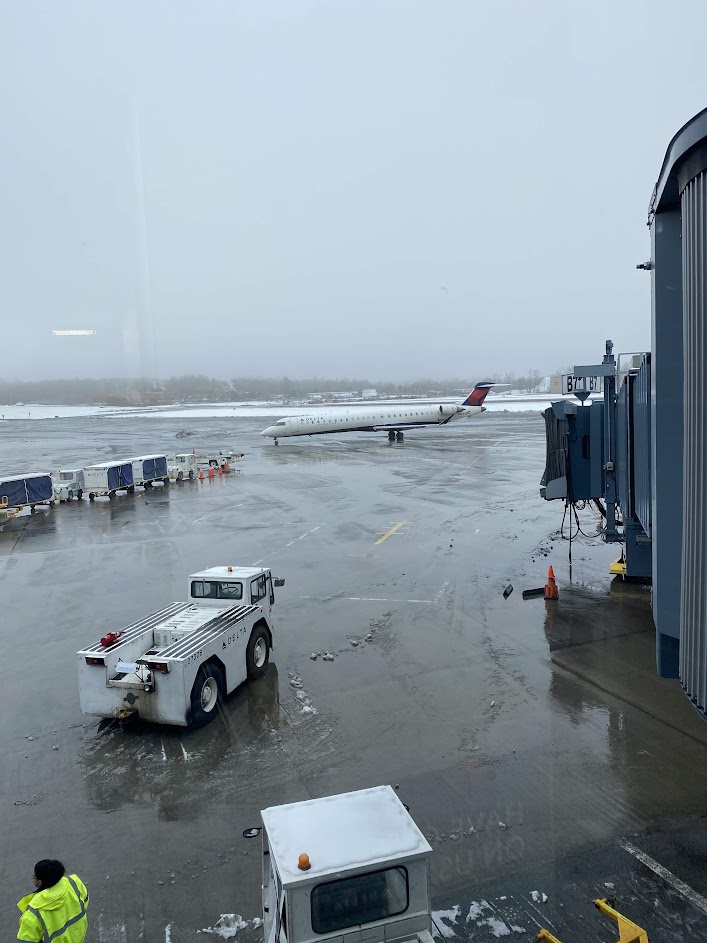 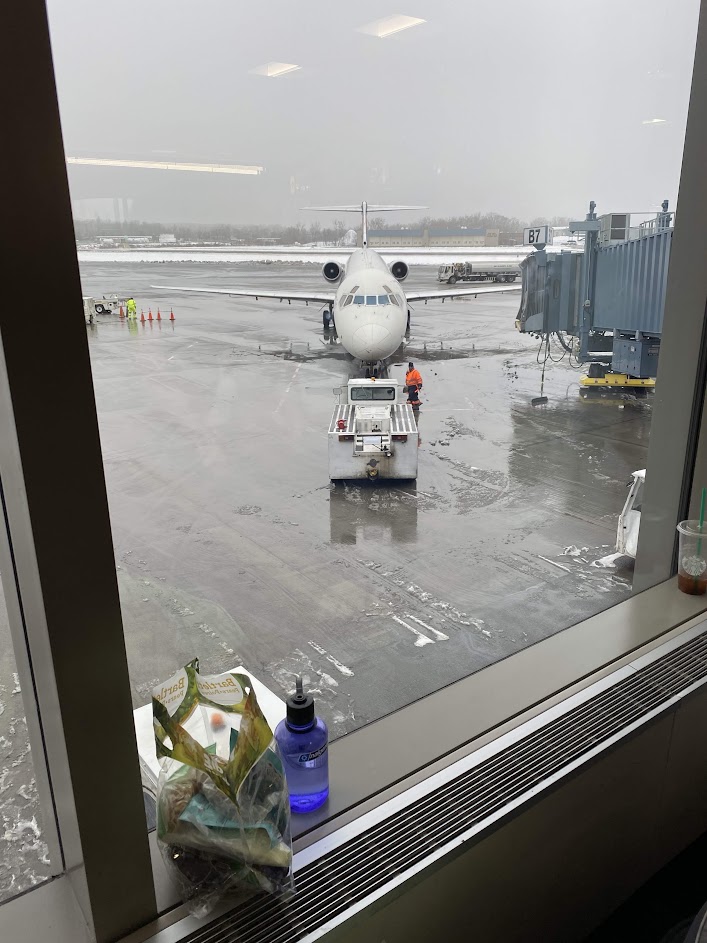 At 11:56, the gate agent announced that anyone with rollaboards would need to gate check them, and that those people should approach the check in desk to get their bags tagged. 10 minutes later the agent began boarding with all preboarders.

After a little bit, I boarded with my group (group 2), and made my way to seat 15D (which unintentionally was the exact same seat that I had sat in on my last trip to DTW). 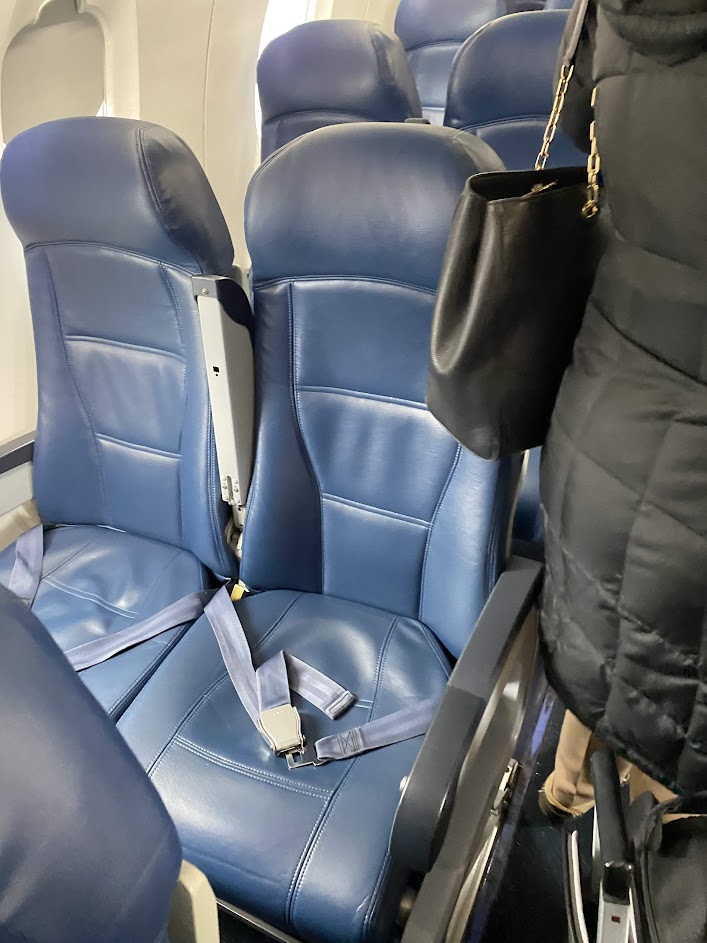 Like my previous flight, the seat offered an excellent amount of legroom, though was a little narrow and the padding was only OK.

During boarding, one of the gate agents had to board the plane and verify that one of the passengers had actually boarded (which is something that I'd never seen before).

At 12:25, one of the FA's announced 1 minute to departure over the extremely loud speaker system. 2 minutes later, the doors were closed, and after another 2 minutes the MN based crew began to perform the safety briefing as we pushed back. At 12:34 we began to taxi, and a minute later the FO made a very brief announcement directing the FA's to prepare the cabin for departure. 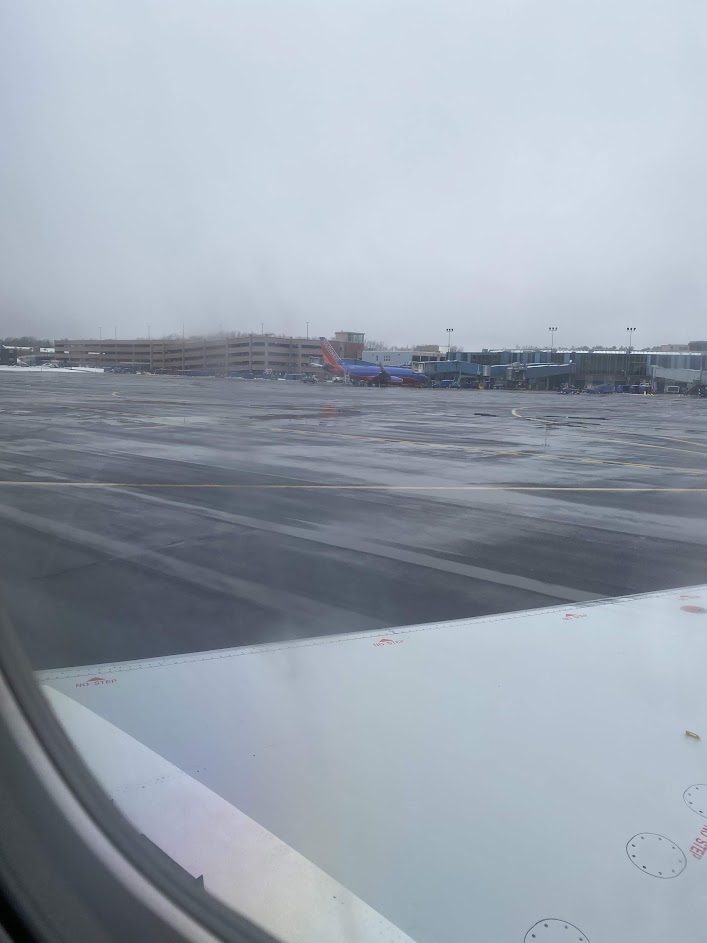 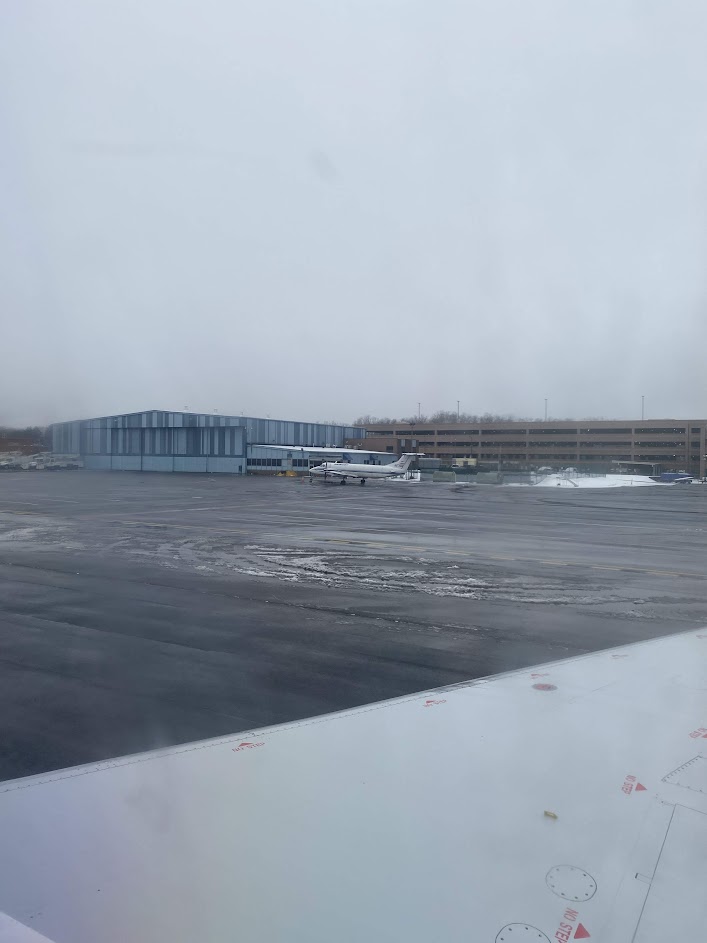 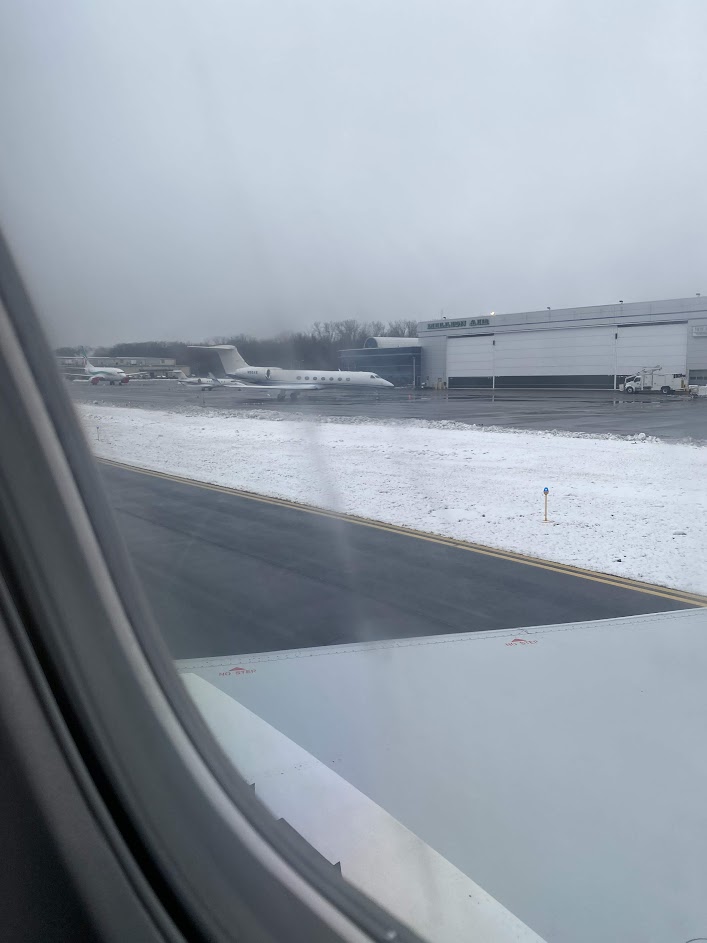 Private jet by the FBO 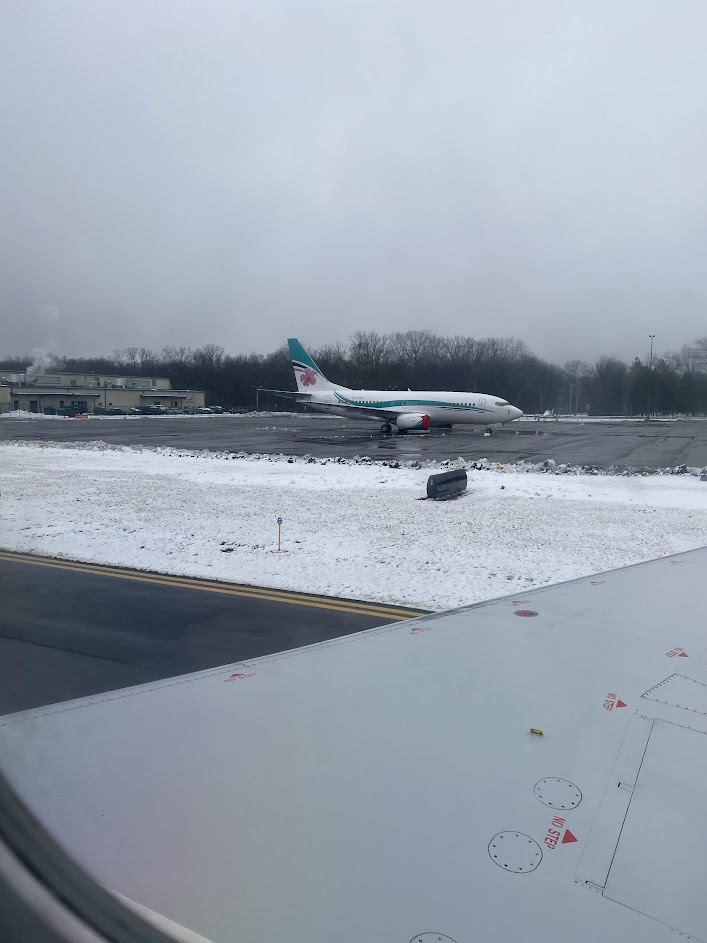 After waiting on a UA Express aircraft to land, at 12:41 we made a smooth takeoff into the low clouds surrounding ALB. As we climbed out we hit a few bumps. Once above 10,000 feet, I pulled out my bagged lunch and began to enjoy my curry chicken salad sandwich and pasta salad. I also tried to get on the WiFi so that I could watch one of the free shows on offer, but yet again my phone could not connect to the WiFi (seeing as I now have a brand new Iphone 11, it's not a phone specific issue).

As I ate and listened to music, the FA began to come around with snacks and drinks. While I passed on the beverage service, I did select a baggie of whole wheat Cheeze-Its from the selection of Cheeze-Its, Biscoff cookies, almonds, and a granola bar. While the FA was near my seat, she requested additional cans of tomato juice from the front, but due to a miscommunication ended up getting apple juice instead. 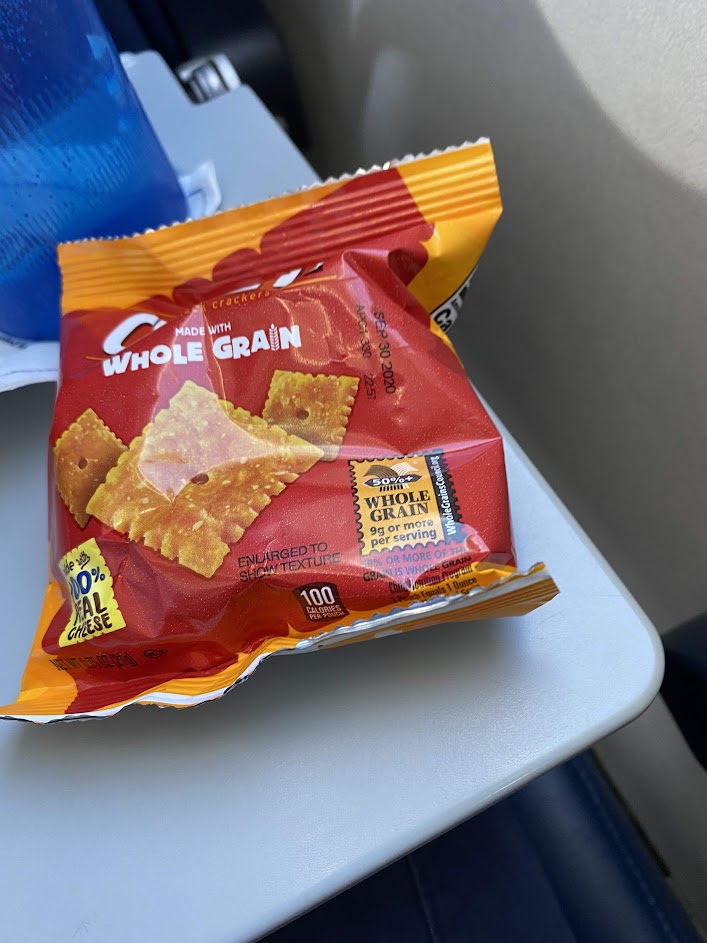 During the snack service, one of the passengers around me asked the FA if the engines were normally as audible as they were on the aircraft, which was answered with an affirmative yes from the FA.

At 14:15 we descended into the thick clouds over DTW, and 5 minutes later the pilots dropped the landing gear. 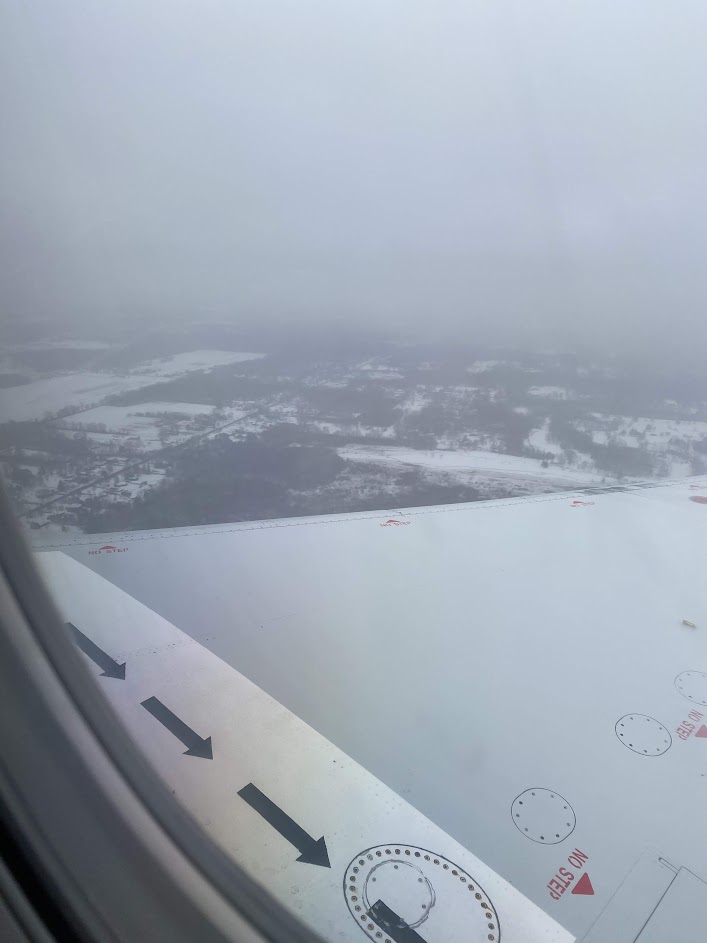 First view of the ground since leaving ALB

At 14:24 we made a moderately firm landing into snowy DTW. At 14:33 we arrived at the gate, though had to wait about a minute before pulling in so that a marshaller could arrive and guide us into the gate.

Because a lot of people had tight connections, I hung back and let them disembark. After waiting a few minutes, I disembarked the aircraft and by 14:55 was waiting for the shuttle to take me to pick up my rental car. 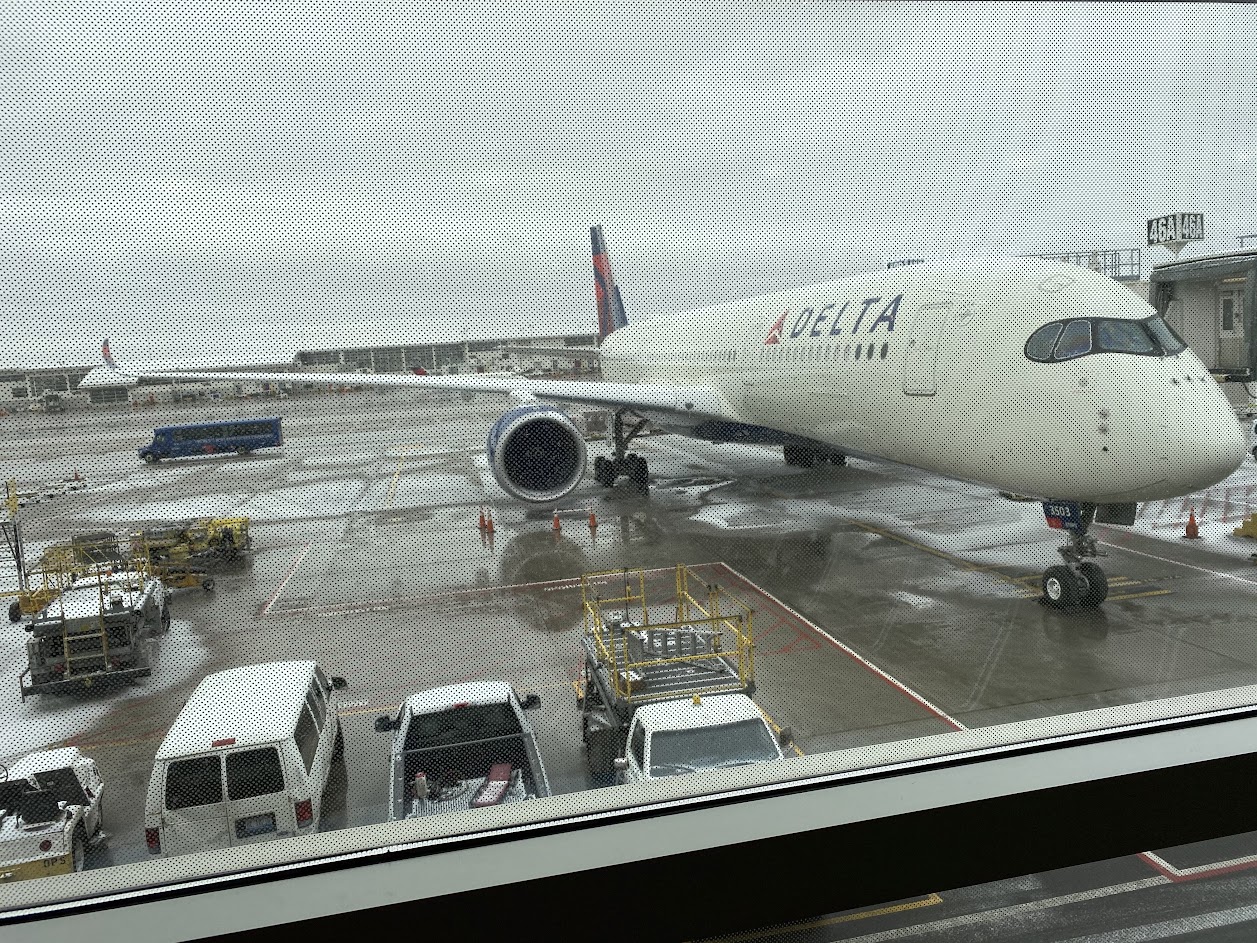 Online Check In
Shortly after arriving at my hotel I check in online for my return flight to ALB. Again, I did not have TSA precheck listed on my electronic boarding pass.

At the Airport
After a long day of (slightly pointlessly) interviewing at Oakland University, I initially stopped at the Al Sultan restaurant near DTW to get a quick, pre-flight dinner. It was excellent, and if you need a pre or post-flight dinner I recommend them. 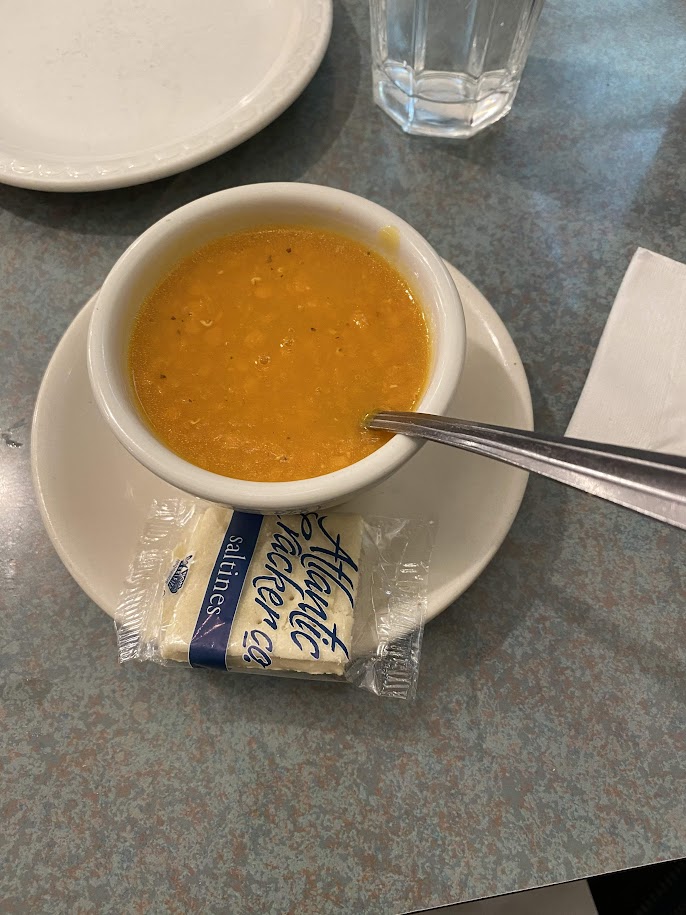 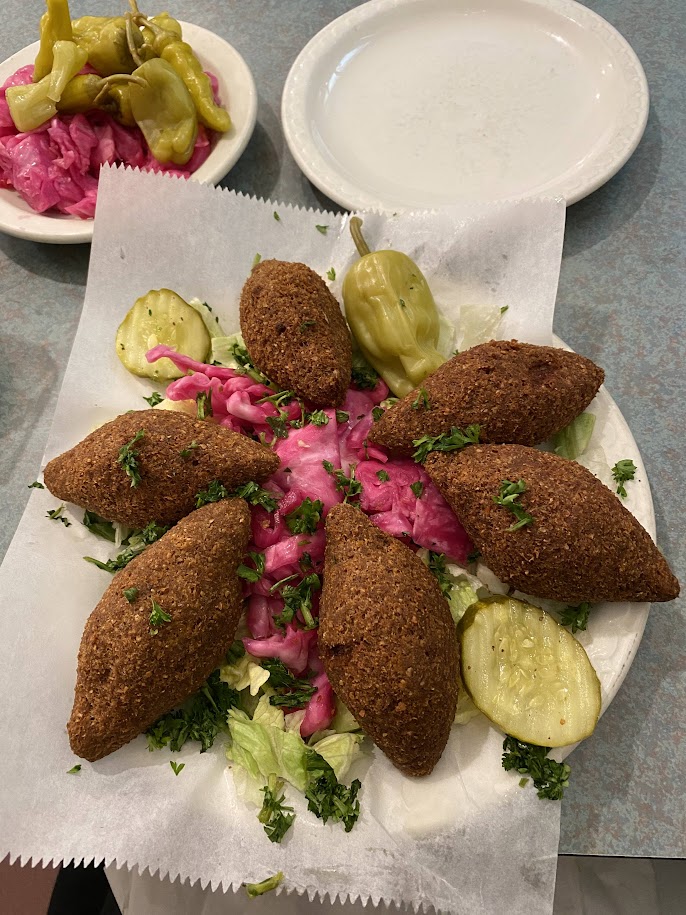 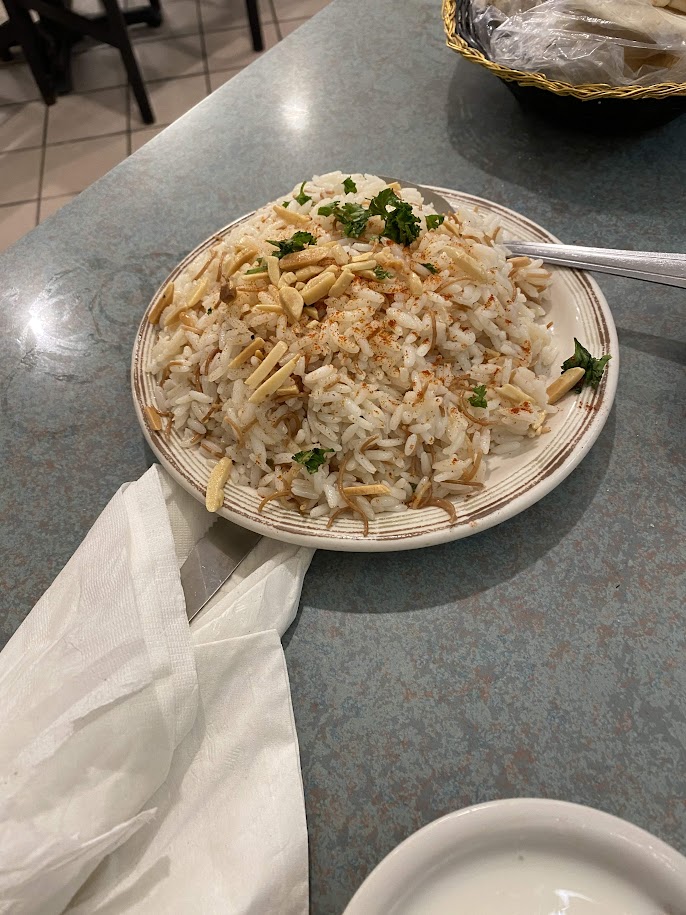 After my dinner, I dropped my car off at Hertz and their shuttle dropped me off at DTW just after 19:50. Because I was in no rush to go through security for my 22:35 flight, I walked around the check in area and stopped to eat the rice pudding that I picked up for desert. After enjoying my desert and changing out of my suit, I went through security, which had absolutely no line. After 4 minutes I was through and began walking around all the concourses to both planespot and get my steps in. 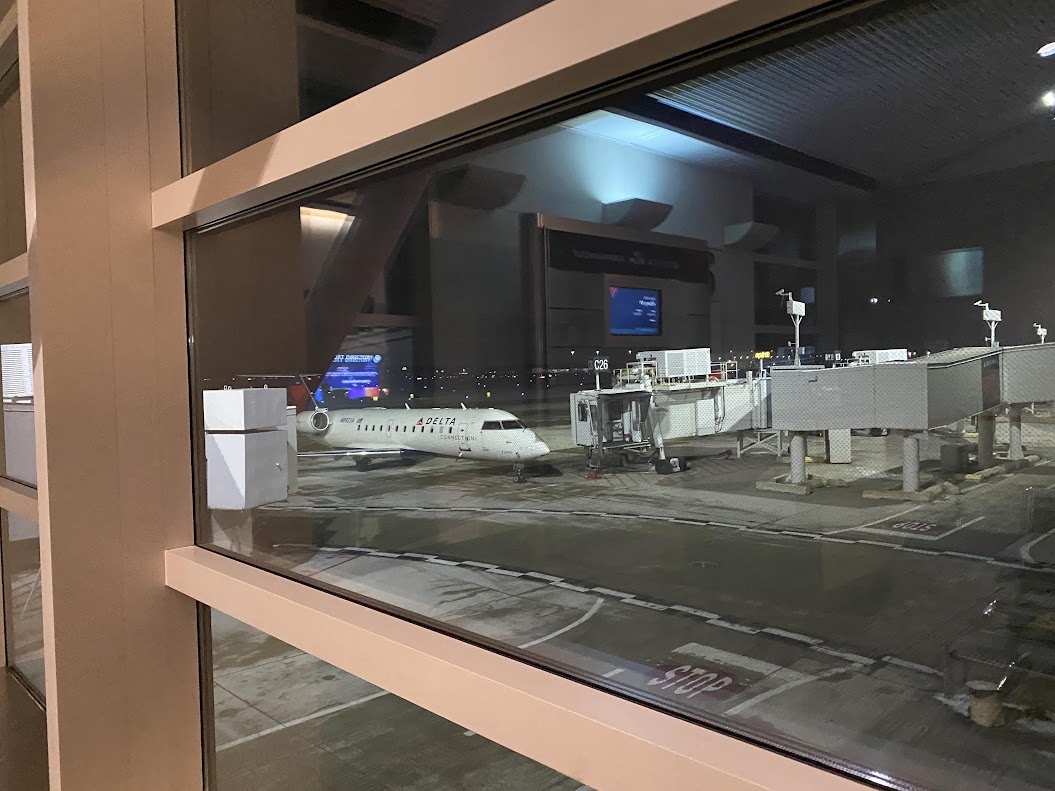 A DL CRJ2 getting ready for another busy day of flying.

During my walk, a half an hour delay was announced for the flight, and the incoming aircraft pulled into the gate 5 minutes early. After my walk I returned to the gate area and did some work on my laptop. Unfortunately, I didn't get a good picture of the A320 operating my flight, so I have attached one from the Anet database below.

At 21:54 the gate agent announced that the plane was delayed so that they could wait for the pilots to arrive.

At 22:18, preboard was announced. For some reason during boarding they skipped my group (main 2) and went straight from main 1 to general boarding.

Onboard
Once inside the modern cabin I was welcomed by the flight attendant before I made my way to 26F. The seat itself was adequate for the flight and it provided a good amount of leg room. I forgot to get a photo, but I have attached one from a previous DL flight that I took. 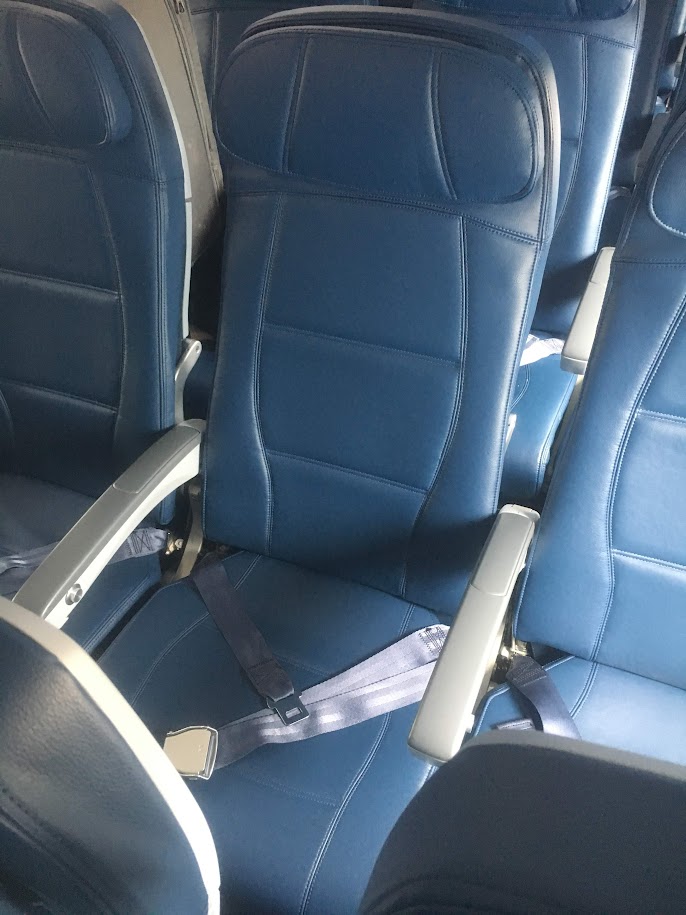 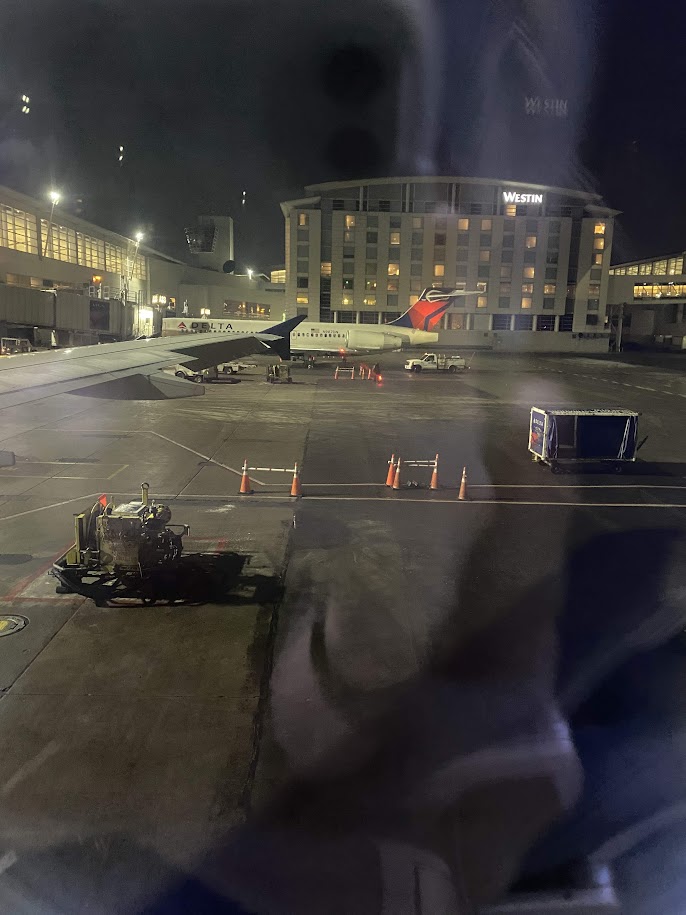 Again during boarding a gate agent had to step aboard the plane to verify that a passenger had boarded.

At 22:47 the FA announced the pilots were onboard and performing their preflight check. When they did this, one of the women sitting near me commented about why they had to do all these checks. Were I not already fatigued from being up at 6 and then attending my interview, I would have scared her by telling the tale of NW 255. Instead I just ignored her.

Three minutes later the pilots made their announcement, saying that they arrived late, the flight should take about 1:06, and that we would be cruising at 29,000 feet.

At 22:52 the main door was closed and I found out that the flight was not super full and I would have an empty middle seat next to me.

At 22:59 the FAs began playing the safety video, and at 23:11 we finally began to push back and taxi for take off. 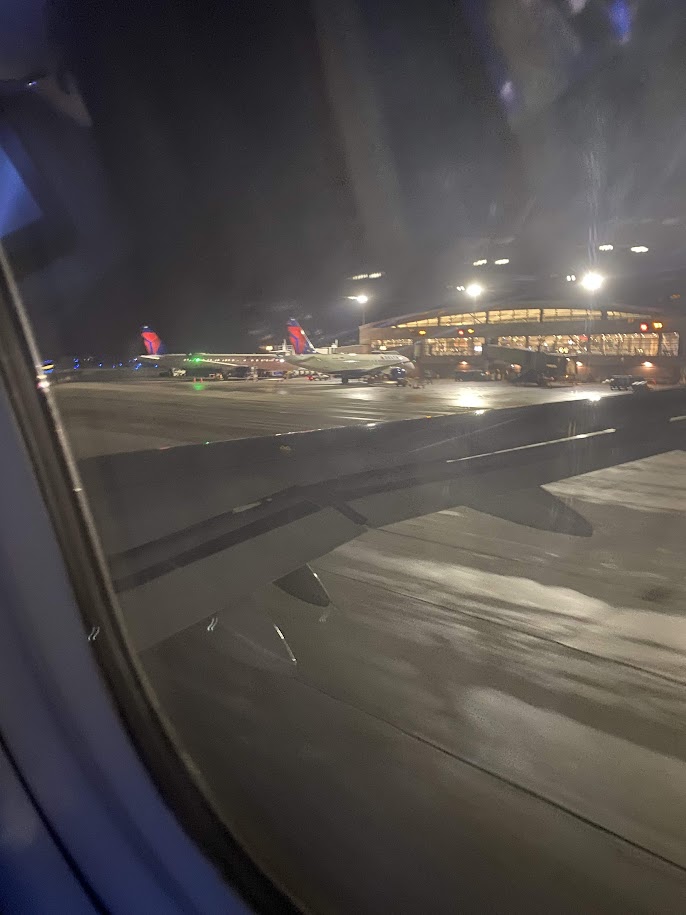 At 23:26 we executed a smooth takeoff with a slow lift. Five minutes later the FA made their initial announcement. Once we had climbed through 10,000 feet, I activated the entertainment system and selected an episode of Bob's Burgers to watch.

While I was watching, the FAs came through the cabin offering beverages and snacks. I passed on a drink but did help myself to some of DL's Biscoff cookies. 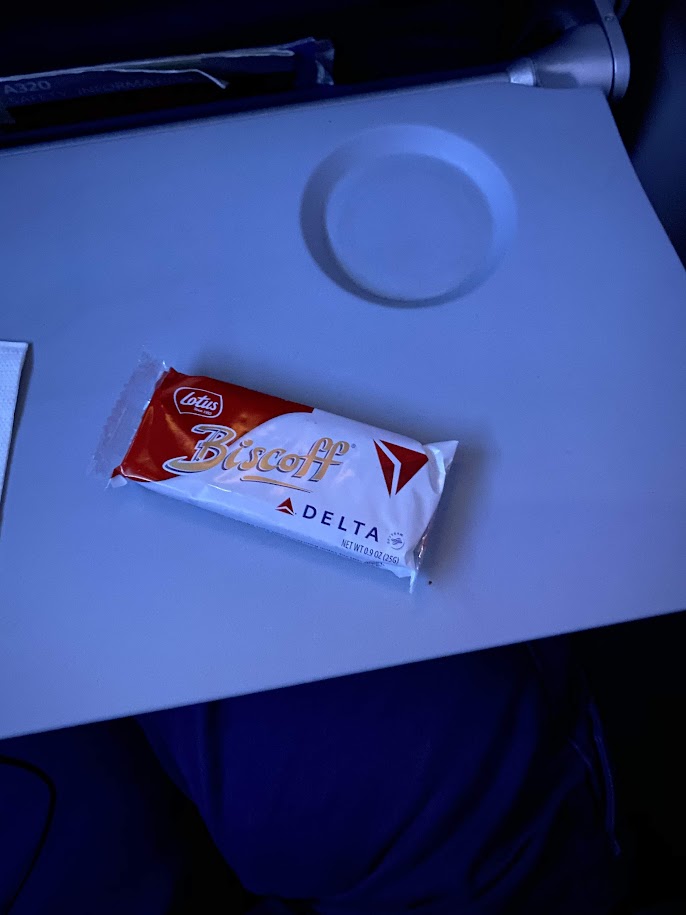 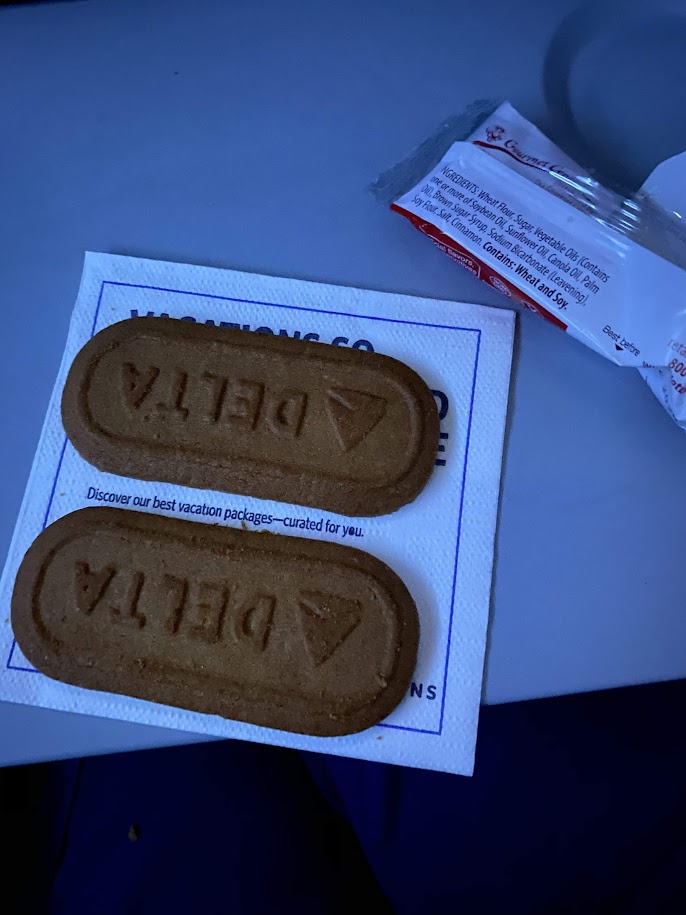 0:11 the next day we began our descent. Seven minutes later the pilots announced we would be arriving into gate B5, and it was very cold in ALB.

At 0:24 the Fas came through the cabin to make their final checks, and 11 minutes later we made a fairly soft landing into ALB. After an extremely short taxi we pulled into the gate at 0:38, almost 30 minutes late. 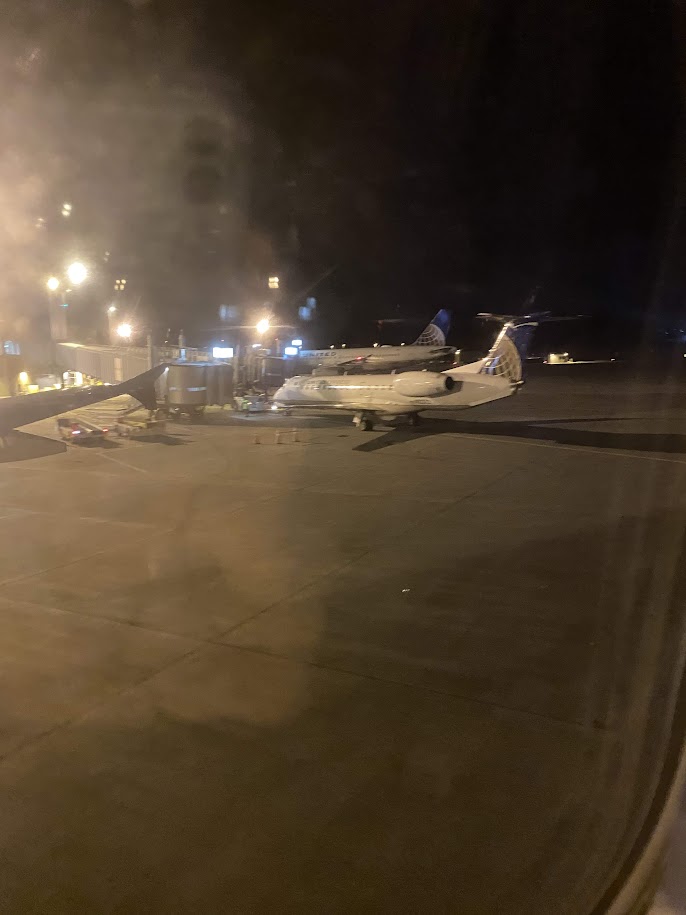 Because I didn't check any baggage or have to wait on a gate check, I was out the door in no time, and after finding my car I was on my way to my apartment.

Summary
Despite a few minor delays, DL got me where I needed to be with a good level of service, and I would definitely use them again.

This chart offers a comparison of all the short haul flights that I have taken.

2018
The Milwaukee Way WN BOS-MKE-BOS
Porting it to and from Toronto
Southwest to Milwaukee and Back (with a surprise)
Air France, CSA Czech Air, and Alitalia to Prague, Bratislava, and Budapest

2016
From my Archives: Summer '16 rescheduled and delayed with Iberia, Vueling, and British Airways

2015
From my Archives Summer '15 Shuttle America: Do they actually meet Delta's Standards?