Last weekend I went out to Phoenix to visit a buddy of mine who generously used his AAdvantage miles to send me tickets. Imagine my surprise when I saw that the tickets were for first class - score! Here's the report:

O'Hare's T3 was blissfully uncrowded at 7:30 on a Saturday morning... there were a fair amount of flights going out, but traffic in the ticket lobby was light. Construction is continuing on the FACE Program (which will expand T2 and T3 and add more circulation space) - scaffolding was covering about half the ticket counters, although they remain open.

I checked in at the OneStop machine and headed through the main T3 security checkpoint. My Phoenix flight was leaving from Gate H16, which is a pretty long walk from the terminal itself. The 'pods' at the end of Concourses H and K tend to handle longer-distance flights; this morning, our MD80 was surrounded by 757s and 767s bound for San Juan, Los Angeles, Seattle and Miami.

Boarding commenced on time at about 8:15am, and I filed down the jetway with the rest of the first-class and pre-boarding passengers. The first-class flight attendant, Jane, was waiting at the door and took our pre-departure drink orders as we found our seats.

This was my first time in American's first class since they introduced the new interiors in 1999-2000. I found the seats to be a little uncomfortable - they're sort of scooped-out in the back and don't provide a lot of back support. They do, however, have a wide center console and the same winged headrests as American's coach cabin.

It was very overcast as we received our drinks, and a light snow began to fall as the coach passengers filed on board. The captain came over the loudspeaker with the bad news that our departure would be delayed about 35 minutes due to the snow.

Our FA Jane took advantage of the delay to take our breakfast orders. We remained at the gate during the delay, so from my window I watched one American Eagle Embraer RJ after another taxi by on their way to Concourse G.

At long last the engines were started and we pushed back for de-icing. The de-icing fluid coated the windows and made the view very blurry, although I was still able to snap a few pictures as we taxied out to the departure runway: 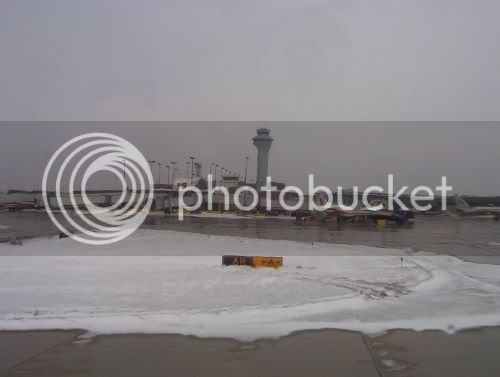 Concourses E and F at T2, with several United Express aircraft parked around the end of Concourse F:

Look at this takeoff queue! The snow delays meant that aircraft were lined up fifteen deep at the runway thresholds. Here's the queue for 9R seen as we turned towards 32L:

Our takeoff roll was about 15 seconds long; the deicing fluid streamed across the windows, making it pretty tough to see:

We flew into the overcast just a few seconds after takeoff and turned left towards the southwest. The deicing fluid eventually cleared off the windows, although it took quite awhile.

As we climbed towards cruising altitude (31,000 feet, according to the captain's announcement), I thumbed through the Celebrated Living magazine in the seat pocket. It's a sort of first-class companion to American Way, although it's not very impressive - it's mostly the same series of advertisements for expensive Miami condominiums that you find in American Way.

Once we had leveled off at cruise Jane came down the aisle to serve pre-breakfast drinks. Many of the other first-class passengers opted for Bloody Marys or Mimosas (I got a Diet Coke) and one even got champagne. I've never been able to drink that early in the morning, but to each his own.

The clouds thinned out as we crossed into Missouri, revealing the snow-covered landscape below:

I was very pleased with my breakfast (although I usually have good luck with airline breakfasts.) We were given the option of cold cereal or a hot meal; not surprisingly, almost everybody opted for the hot meal.

My breakfast consisted of: an egg-and-cheese quesadilla with a side ramekin of salsa, sausage links, and a fresh fruit platter. We were also offered a choice of biscuits, bagels or rolls.

We crossed into Kansas during breakfast and the landscape began to really flatten out. Our route took us over St. Joseph, Missouri, just north of Kansas City, and out towards Topeka and Salina:

Midway through the flight, passing over snow-covered fields just outside of Garden City, Kansas (note that the snow cover is beginning to thin out):

At this point I was glued to the window - watching the landscape become drier and more rugged was interesting. Here we are flying over the southeastern corner of Colorado: 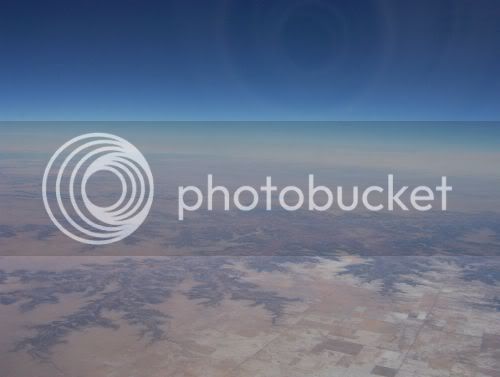 Eventually the majestic Front Range of the Rocky Mountains appeared on the horizon (it looked like a line of clouds initially, but as we came closer it was easier to see the mountains):

Passing over the small town of Raton, New Mexico and Interstate 25:

As we pushed into western New Mexico the landscape dried out completely and the snow disappeared. Our route took us right over the Petrified Desert National Park, which the captain pointed out to us (it was difficult to discern anything down there, however.) I spotted Interstate 40 threading through the desert below, and a huge industrial facility with lots of smokestacks (anybody know what that might have been?) Not long after the engines throttled back and the crew announced our arrival into Phoenix.

Over the Coconino National Forest, starting our descent about 100 miles northeast of Phoenix:

The scenery outside was gorgeous; by this point almost every passenger was looking out the window as we descended. We flew parallel to Arizona Highway 87 for quite awhile, passing by the Bartlett Reservoir in the mountains northeast of the city:

Spoilers came up for a few minutes as we headed down lower and lower, and before long I could see the Phoenix metro area spreading across the desert floor ahead of us.

The first signs of civilization - the northeast corner of Scottsdale and the Pima Freeway:

A close-up of the Scottsdale Airport:

Crossing Paradise Valley, with a corner of Camelback Mountain visible at left center:

Heading across northern Phoenix on the downwind leg, with the 17 Freeway and Metrocenter Mall visible:

It was a stunningly beautiful day in Phoenix - sunny with incredibly clear skies. Here we are turning base over Glendale:

Lining up on finals above Interstate 10, the Papago Freeway:

Our final approach paralleled the dry Salt River bed, with the South Mountains off in the distance: 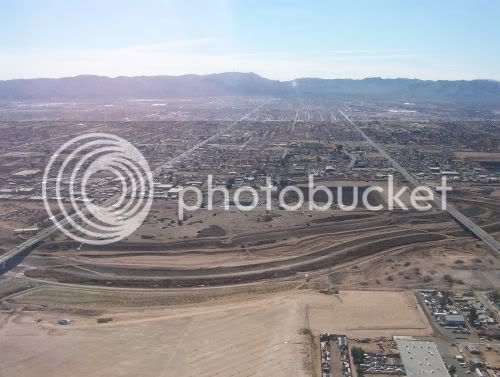 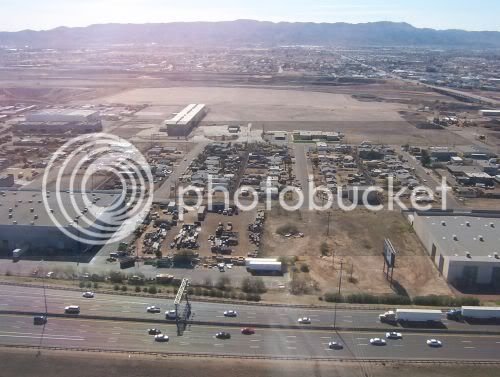 Our MD80 touched down on Sky Harbor's Runway 8R (the newest runway, opened just a few years ago) just about ten minutes behind schedule: 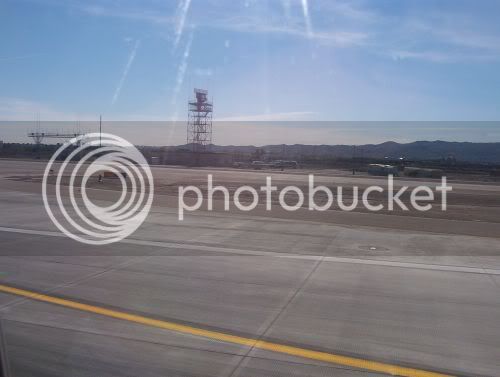 I hadn't expected PHX to be as busy as it was - but as we turned off the runway I could see four or five more aircraft stacked up to land behind us. We had to hold short of Runway 8L to allow a Southwest 737 to depart, then crossed over just beyond Terminal 4:

America West aircraft lined up on one of T4's concourses - look for the special Arizona aircraft:

The daily Hawaiian 767, taxiing out for departure to Honolulu:

Sky Harbor's Terminal 3 will be 25 years old this year, but it still looks pretty good inside. The South Concourse handles American, ATA, Midwest and Aloha flights, but wasn't too busy this time of the day:

This was an amazing trip - aside from the comfort of first class, the attentive service, and the good food, the weather conditions throughout the flight were spectacular. It was a great day for flying - the pictures don't do it justice, but I hope you enjoyed them nonetheless!

Watch for the return trip in the next day or so!
Top

Great report and I love the pics... too bad i don't care for AA
Continental Micronesia: "Fly With The Warmth Of Paradise"
Top

Great report, cant wait to see the whole of the u.s when i flyfrom phl to las

Wonder if i will have room on my cam for pics on the ground.
Where does the time go???
Top


Thanks for the report.
Top

Nice trip report. The PHX terminal reminds me of HNL. Looks like the same signage.
Top

Thank you for the wonderful report. The pictures of Phoenix and Sky Harbor International Airport, brought back a lot of memories for me. When I was a kid me and my family used to fly to Phoenix a lot to visit my grandparents.

Thank you for sharing your report with us. I'm glad you liked AA. I might switch to AA in the near future, except I cant stand the MD-80's.
Top

Thanks for the trip report, very nice !

DALelite
They loved to fly and it showed..
Top

THat rouet is very very familkair and also brings memories, first time I flew by myself was to PHX. I flew it on Southwest STL-PHX with a stop/no change of planes in MCI. I recognize the approach into PHX we landed on i forget, but I know we took off on Runway 25R. Great pics and happy flying! AA is the best!

Very good trip report and welcome to PHX!! Hope that you will able enjoy for you in PHX for few days and I am live in PHX right now. When I was moving from FLL back of 3 months ago. Thanks!

Great Report! The pictures really make it much more enjoyable. I hope you have fun in the PHX area. I need to get down there again and out of this cold weather! lol How do you know so much about the geography of the PHX area? Are you originally from Phoenix? Anyway, great report.
"FLY DELTA JETS"
Top

Is this the breakfast you had?

I had it last october from LGA to MIA

That is indeed the breakfast I had - although instead of patties (or whatever that is) I had sausage links.

I wanted to get a picture of the meal, but I would have felt silly photographing my food with someone sitting right next to me.
Top

Nice report, and great pictures. I love trip reports with pictures. I flew yesterday on a 757 from SJC to JFK, and yes me too I had my eyes glued to the window. Between the Rockies and the Chicago area I saw nothing but deserts and fields shaped either in rectangles or large circles. The skies were clear, your pictures make me feel I'm with you on that flight.
Thanks for the pictured report, I greatly appreciate.

Like Ben said I felt I was also with your flight. I flew mostly your route too but from YYZ to PHX. The big difference was that when you left things were more white than when I flew, but after you get over Nebraska all way to Arizona normally is all blue sky and brown desert under you! Nice pics over the Rockies, I also took some but again not that white and finnally PHX airport, for me a big surprise, I never expected such a big airport like that. The Hawaiian 767-300 must be a regular stopper there, I saw it also when I landed! My trip was with HP from FAT to YYZ via PHX, I flew CRJ200 from FAT to PHX them due to a HP delay I flew AC 321 from PHX to YYZ, and on the way back HP 319 from YYZ to PHX and a CRJ700 from PHX to FAT.
regards
CV990, the Maserati of the skies!
Top
Post Reply