This would be my first trip of the year, as the title suggests it, but would also be my first flight ever during January. All the months were covered with flights, but not January. I booked the trip since November 2008, paying around 50 euro for both me and my girlfriend, quite a bargain.

As the trip got closer and closer, I constantly checked the same flights I would also take, to see if there are delays or even cancelations. A week before the trip there was a lot of fog in the Venice area so many flights to Treviso, if not all, were cancelled or rerouted. I knew that January wasn’t the best month of the year to travel to this area, which is often foggy, but I was hoping for the best.

On Friday, January 23, a day before my flight, fog also caused many flights bound for Treviso to be cancelled or rerouted, some to Venice Marco Polo and some all the way to Trieste. I even considered not flying at all, than to land maybe in Trieste and arrive in Venice very late in the evening.

Looking at the flights in the Bucharest Aurel Vlaicu / Baneasa Airport, I noticed that all the flights from that morning landed at the bigger and more equipped airport, Henri Coanda / Otopeni. That’s also common, it happened to me before, on a trip to / from Vienna, on SkyEurope.
So actually the aircraft, which would take us to Treviso would be the first flight of the day to land at this airport. The aircraft arrived ahead of time, from London Luton, so we just waited patiently for boarding in the departures hall.

Boarding began as planned, we were taken to the aircraft by bus and boarded the aircraft through the rear door.

We chose row 28, on the left side. We usually choose to fly on the right side, when flying west, because of the sun. This time we said to try something else.

Germanwings / A319 - it was coming from Stuttgart

Taking off on runway 07

A brand new neighbourhood is being built, on a place which not so long ago was just plain field. I wonder what’s the future of these projects, considering the current economic situation.

Heading east for a while

Then we turned west, flying not far from Bucharest Henri Coanda / Otopeni Airport. The poor lighting conditions, along with the fog, didn’t helped me at all when trying to take pictures.

The sun light was coming almost straight at us, so we regretted that we chose to sit on the left side.

The in-flight service came, I chose only a bottle of water and snacks. The napkin was nice, it seems the Wizz Air started again to use the napkins with the logo. Last time I saw one was in 2007.

Cloudy view, on the entire flight

Approaching Treviso, we made a 180 degree turn, to land from the west.

The Alps were visible, through the clouds 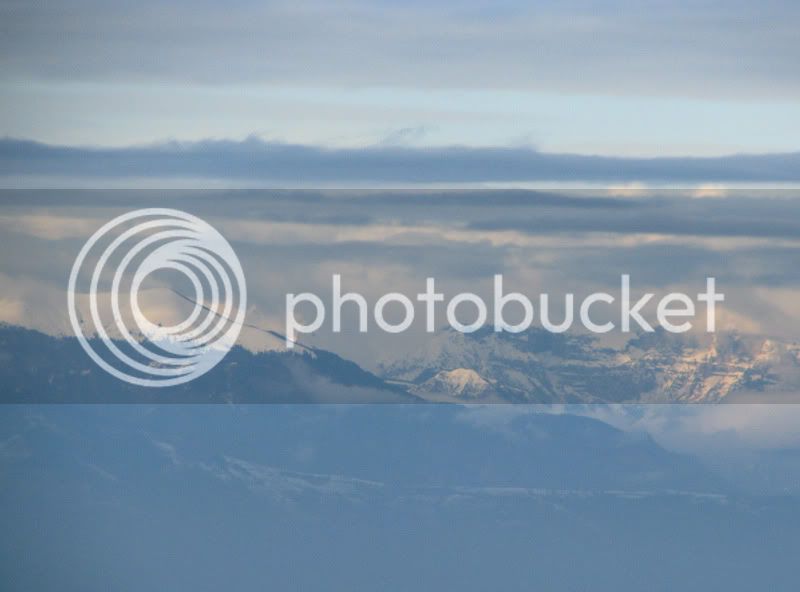 We deboarded quickly and got to the terminal on foot

We passed immigration and then we were outside the building in no time. We bought a bus ticket to Venice and than waited inside for almost half an hour before leaving.

View of the terminal from the bus

After an hour of winding around on many countryside roads, at very slow speed, we reached Venice. It would be the second visit to Venice, the first one being in 2002. Actually, it would be my 4th visit, if I count also the Venetian Casino visits, in Las Vegas... But I guess those don’t count.

The road into Venice, along with the railroad

We bought a ticket on the Vaporetto, which would take us over the Canal Grande, to San Marco Square.

The new bridge in Venice, designed by Calatrava

The bridge next to the train station (Ponte degli Scalzi)

Off-season, so many gondolas rested ashore

By the time we reached San Marco Square, it was already night.

In the square, we played with the pigeons, which were all very friendly, some of them too friendly.

A pigeon deploying speed brakes, on final approach to... my girlfriend.

Many small shops in the labyrinth of streets

Night view from the bridge

Around 10 PM, we took the bus to Marco Polo Airport. We never planned on booking a hotel room in the first place, given the early check in time. We initially planned to walk all night through the streets of Venice and go at the airport at 5 AM, but the cold and humid air, together with the perspective of a rainy night (it rained that evening for 10 minutes), changed our mind quickly, so spending the night in the airport was a much better thing to do.
After all, it wasn’t bad at all. The seats weren’t ideal but weren’t the worst either, and at least it was warm and quiet in the terminal.

Our flight was luckily on time

After the security check, we walked inside the nice terminal, which had a wooden floor, like in Copenhagen Kastrup Airport.

After buying some chocolate gifts, we went to our gate.

Boarding began soon, but the queue line was formed a few minutes before. Even though MyAir assigns seats at check in for a while now, people still prefer to wait and stand in the queue before boarding, instead of sitting on the nearby seats. Always a mystery to me...

We were taken by bus to our parked aircraft, which turned out to be the MyAir / VW logojet.

Making our way towards runway 04R. Venice was barely visible somewhere on the horizon.

Taking off, it was still dark outside

After take off, we banked right over the lagoon

Clear sky above the clouds

We fell asleep after that, but there wasn’t anything to do anyway, with no view outside.
Later the in-flight service came and I asked if they still sell plane models. Last time I flew with them, in 2007, I bought an A320. Unfortunately MyAir doesn’t anymore, I would have liked to buy two A320 for two buddies and one CRJ-900 for me.

Before landing in Bucharest, the Carpathian Mountains were visible, at a distance of 150-200 km.

Final approach into a foggy landscape

We went all the way, turning at the end. The taxiway is being repaired, so you have to cross the whole length of the runway to get to the apron.

Parking very close to the terminal

While deboarding, this Mistral Air / B737-300 went by. It was a flight operated for MyAir, coming from Bergamo.

VW logo on the tail

Leaving the aircraft behind, as we entered the terminal.

We then passed immigration, no luggage to wait for, so we were on our way home right away. We were a bit tired, but the whole experience turned out to be a very nice one. Really successful week-end.

What I miss the most are the pigeons, so I plan on going back to Venice during summer, but we’ll see.
Next trip of 2009 would be to Rome and Bergamo, done in one day, next week-end. The trip report including 3 flights would follow as soon as possible.

Please feel free to post your questions or comments.

real interesting report.
While there is some Wizzair material here, MyAir was also something good to read about.
Like your nightly Venice pix, real good and special for sure.

Hi Phileet92,
Thanks for the message.


What do you mean?


Hi Markus,
Thanks for the reply.


Thank you again.
Yes, some of them turned out really nice. The night shots were done by putting the camera on something solid and with a few seconds exposure time. Venice landmarks don’t seem to be very well illuminated during the night, so there’s not enough light to work with.
But the pictures done while on the boat trip were even more tricky, as bad light and constant movement give you few chances to come up with clear pictures.

All the best!
Nick

Nice report and pix, thanks.

Not many Myair TR's around, how do the 2 carriers compare?

Nice report. Well 2 weeks before the Venice airports suffered major delays for the snow. The north of Italy isn't a paradise in the winter season. Here in Milan we had almost 70 cm of snow in the beginning of january and there are some towns in the Italian Alps not far from Venice such as Cortina where there are more than 2 meters of snow. It's a pity you didn't fly over the Dolomites.
I love the Venice Marco Polo airport by the way, it's one of the coolest airports in Europe.
Top

very interesting report with many great pictures from Venice. Also nice to read about MyAir.


You were really lucky to get the logojet - it looks stunning. As for the Scirocco - I'm not sure yet.

Nice to see a MyAir report. Never knew much about them.


Pretty much the same thing, really. Except the seating, which is allocated at MyAir.


Well this time I didn’t, but on other occasions I had plenty of aerial views above the Dolomites on my flights to and from Milano.


I agree. It has become one of my favourites too.


I am committed to write many more this year. Even though the routes won’t be that interesting, but I’ll try to make up for with some nice pictures.

All the best to you all!
Nick

Again a real nice report from your hand. We don't read too often about MyAir, so that makes the report more special. I also liked the pictures from Venice, as it really is a top 10 European Must See location.
The VW-logojet is nice, always good to catch something unusual although I can imagine your wish for the CR9, which really is a nice aircraft, and a bit rare also.

Hi Josst, thanks a lot.


I really want to hop onto a CRJ, whatever series. I tried it in the USA last summer, it didn’t work out. Maybe I have the chance soon on MyAir or even Lufthansa DUS-OTP, which offers very low fares, around 100 euro rt.


I noticed it also. I liked btw.

Hi Fatmir,
Thanks a lot for your comments.