It has been a very long time since I wrote a trip report... I actually owe you guys and will always owe you the Tokyo-Hong Kong bit on Japan Airlines... In the meantime my life has changed a lot... I moved from Zurich to Buenos Aires.... almost got divorced... and traveled quite a bit (Chile, Sao Paulo on Qatar, Seattle, etc), including a segment on seats 2A and 2C from FRA to EZE on Lufthansa.

Now that things are a little bit more settled in my life I felt I had the peace of mind to write another trip report. This one is a special one. I have to travel on a monthly basis to SCL and I had tried both LAN and Aerolineas (don't get me started on Aerolineas), when I learned that I could fly the segment on a 77W courtesy of Air Canada. This trip report is on the EZE to SCL leg. I truly hope you enjoy.

THE DAY OF THE FLIGHT

My flight was due to leave at 5:50 PM if my memory serves me right. So I had finished packing around noon.

My bags, ready to go:

My taxi driver was kinda cute... but very quiet. It's a 30 minute run to the airport here in Buenos Aires... Here we are arriving. I believe these are the old terminal buildings...

Check in was a breeze... and the lady agent was very nice.... She assured me that life was still good (i.e. I still had the window seat I had selected) and even allowed me to carry on board my carry on (it weighed more than the 8 kilos they say is the limit). So I proceeded to security and immigration... A shot of the airport. Civilized, right?

Well, that civilization ended as soon as you entered the security line. First of all, you have to go through this counter so they scan your boarding pass or whatever... don't really get why they do this and have only seen it in modern Venezuela:

Things took a turn for the worse and out of nowhere, huge lines got on my way to security... I mean, look at the millions of people:

There had to be a reason for this... and soon enough I found out it was Ezeiza being Ezeiza... meaning that even though there are quite a few flights that leave at the same time: AF, IB, LH, AC and JJ, only 2 X-ray machines were working:

Mercifully, immigration was not too bad, but I was (as I tend to be lately) a little grumpy, so I got really annoyed at some people who didn't complete their immigration forms before their turn... I don't know if it's because I am quickly reaching middle age or what it is, but this annoys the hell out of me...

Finally, I walked to my gate to de-ogre a bit and take pics of the airplanes. My ride.... aint she a beauty?

Boarding started right on time. It was a bit messy, but not too much. The staff made their best effort at making people understand the boarding process... it wasn't too bad: 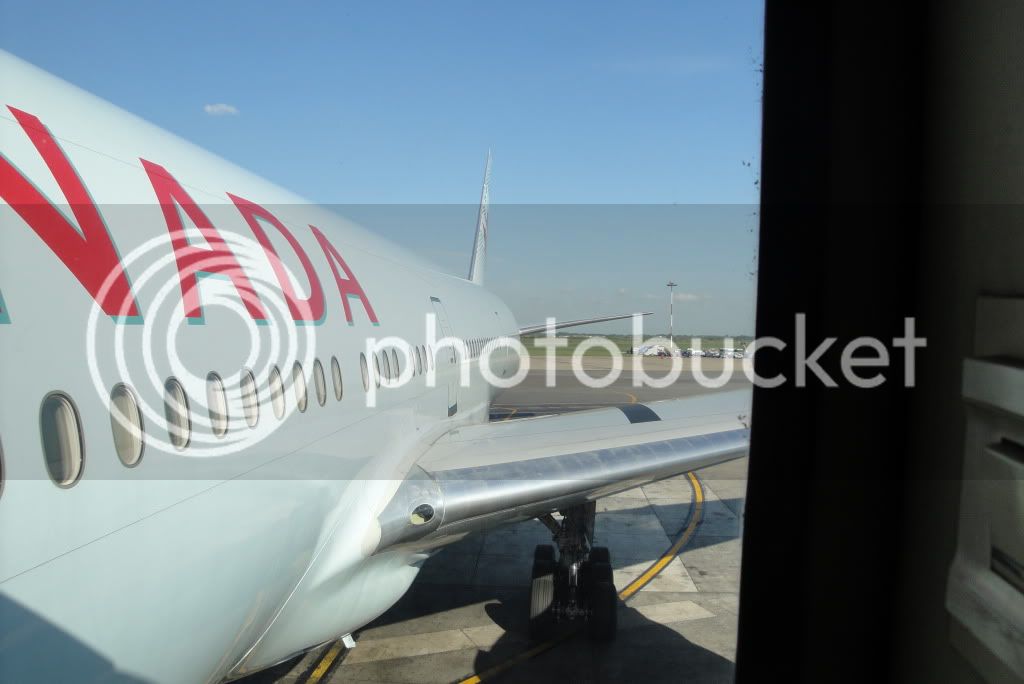 One of the few lessons life has taught me is that when you are in a grumpy mode, bad things happen to you... I got this crazy lady who stood on the seats reaching for the overhead bins... not a pretty pic:

Legroom... not incredible... for a short hop it was ok, but man... going to Toronto like this would be a nightmare...:

Views from my seat:

We pushed back right on time... and headed to runway 11. Some pics I took along this nice ride to the runway:

Take off was nice and uneventful. Do check it out, it's a nice video:


I have to say that the flight attendants (both male or female) would probably not win a miss universe contest... or a charm contest either... but they were not too bad.... few smiles, few frowns... Dinner, or something like it was served... it was dry as sawdust...:

So I kinda checked the entertainment system, but it kinda sucked... with a lot of canadian shows or movies (which is ok, I guess). I decided to use my IPAD instead and turn on the map thing:

I was surprised they didnt make us fasten our seatbelts when crossing the andes as the do in LAN... Nice pics of the crossing (little snow... )

To do a short hop on a 77W is always a fun experience... Air Canada keeps their planes nice and the service was.... OK. LAN is still better. Aerolineas still holds tight to last place... Would I fly them again? most likely... it wasnt too bad... One thing I forgot to mention is that all announcements were made in english, spanish and french, and this was a bit annoying, as the simplest thing would turn into a 10 minute ordeal....

I leave you with a pic I took when I was leaving the airport... soothing.

I am between the devil and the deep blue sea
Top

Nice trip report, I flew AC on a short YUL-YYZ sector as well and enjoyed the flight.

Nice TR!!! Great to have you back!

Keep enjoying them gorgeous 777s in and out of EZE (waiting on your next trip to GRU, hopefully on Qatar Airways

I find the entertainment on AC good. The crews are nice and the food "mediocre." Legroom on my flights was good. However from what I understand some seats have 31" legroom and others 32". Expedia (or seatguru; I forget) shows you the different legrooms which I like.

When it comes to "customer service" it is a disaster. They lost my suit case "permanently." I had to talk to agents in India who knew nothing. After 3 months they offered lousy compensation, well below the $1,600 maximum allowed under IATA rules. I had to sue in Small Claims Court to get the maximum which was still over $2,000 short.
Top

I think AC are pretty good, and the 77W is a great aircraft. Best carrier in north america.
Top

Very entertaining report, I must say!

I would fly that 77W again in a heartbeat, although as you said, the legroom is quite atrocious.

Here's my trip report, seating ONE seat behind you. Mine was from YYZ to FRA, so it was quite a fight agains the front seat.


I would think about it. Look at the EZE lines, probably at the times when LAN or Aerolineas fly out to SCL these lines aren't so bad. This would be kind of big for me, and you being a LAN FFP member, then it's a choice I would consider.

Thanks for the report!

Nice report; we flew DEN-YYZ-SCL-EZE-SCL-YYZ-DEN on AC back in October '09, but our flights were on the 763. I like the 77W: beautiful aircraft.

That report is here:

Great trip report!
yes it's the anti-cool trip report but it's still cool but in a different way.


That sounds terrible. Do they not know the urgency when you have that many widebody, long distance flights?

Hola ogre727 !
I'm glad that you're back and even more that you have moved to Buenos Aires...new opportunities for your "investigative journalism"...
btw...all of your trip reports are a bit funky in style, but I like them ... : )
good luck with the new page of life ...take care Stipica
Open your eyes and think
Top


I believe Air Canada's standard policy is seat belts on when you are sitting down, regardless of if the seat belt sign is on or not. I'm almost 100% sure they mention this in the pre-flight safety video.

Great report, back in February 2008 I flew YYC-YYZ-SCL-EZE and back, but the flight was operated with a 763.
Top


I understand that, but for whatever reason whenever you are crossing the Andes, other airlines make you keep your seatbelt fastened... I have experienced this with Iberia, LAN, Air France, Lufthansa, and I believe Aerolineas Argentinas... so thats why it was a bit weird for me...

thanks for all your comments...


Sorry, none. Didnt you read above I almost got divorced last year? I behave better now. :P
I am between the devil and the deep blue sea
Top

I flew LAN (Peru-peruvian flag on the aircraft) on the EZE-SCL sector and they are an efficient, reliable airline. However, the crew on the flight was not the greatst or friendliest. Cold and robotic, to the point were on flight attendant scolded a passenger for not untangling his headphones when she was picking them up to prep the cabin for landing. On the other hand the ground crew in SCL was very nice.

On the other hand I have flown AC, only on a short hope between YYZ and YUL and I was surpised at how professional and friendly they were. Granted they dont serve meals on this short segment and headphones are for sale, but the crew on my flight was excellent.

Great report. Did you knew that you can fly i.e. FRA-YYZ-SCL-EZE on AC and that it's actually quite a cheap option usually? Not sure who would fly that much just to save a few bucks... Most people would choose a more direct route.

Never flew with them, but I guess they could compete with AR

Or why not taking Pluna via MVD?

If you are to fly to Brazil, you can also take BA or QR to GRU...
Top


But I did... I actually flew out to GRU on BA in J, which was awesome, and back to EZE in QR in Y, which was awesome... I have to say that although it felt a little fake at times (I guess I am too picky) service on QR was incredibly good, and talk about good looking flight attendants... male, female, whatever, they were all good looking.
I am between the devil and the deep blue sea
Top

Firstly, congrats on your six years with A.net!

And thanks a lot for the awesome trip report. I really appreciate that you had the time and the will to write it and share it with us... especially after the hectic life you've had lately. 5th freedom trip reports are some of my favorite, and I was particularly interested in yours because (i) AC seems to be a very high quality carrier and I would like to try them some time; (ii) I have connected at SCL; and (iii) I have always wanted to fly to EZE and spend some days in Buenos Aires.