NatureAir (5C) and United (UA) PJM-PVS, SJO-IAH-SFO
After four days of hiking through beautiful Corcovado National Park, it was sadly time to leave the Costa Rican jungle and return to the States. This brought us to the largest town south of Corcovado on the Osa Peninsula, Puerto Jiminez. A few words about Puerto Jiminez: we liked Puerto Jiminez a great deal and would recommend it as a good ending spot that is just a bit off the beaten path, but with really good atmosphere and authentic Tico friendliness, especially at the local pizza place and some of the beach restaurants there. Also if you're staying there, the Cabinas Jiminez is excellent.)

The NatureAir “terminal” at Puerto Jiminez is a single-room office with a two-person counter hidden at the end of an open courtyard, in a dingy shopping center across from the fenced-off runway. I was greeted at 6:30 AM by a young Costa Rican gentleman who soon announced I would have to pay $20 for overweight luggage (check-in luggage on the “locos” fares is only 15 pounds). This wouldn’t have been so surprising had I not paid $7 for the same luggage on the flight down. S##t happens but when I got the weight down further to below 20 lbs, the staff argued that the total weight included my friend’s bag as well. Huh? After a few minutes of discussion he seemed to give up and my friend and I paid $7 each, this despite my removing things to bring my bag down to the under-20 pound weight, and my friend’s bag weighing easily 30 pounds. Well, as the locals say, Pura Vida!
Welcome! to the graveyard at Puerto Jiminez airport... 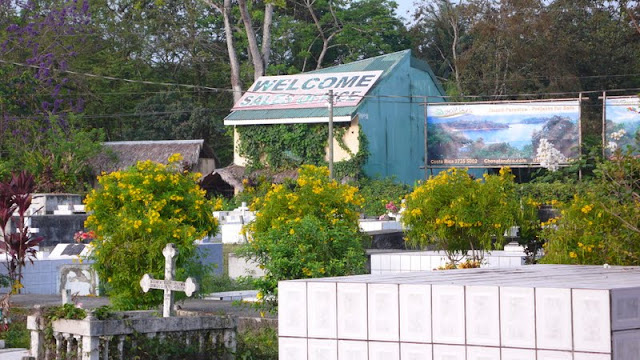 The Cessna Caravan pulled up about five minutes before departure time and had discharged the incoming and taken on the outgoing passengers in less than ten minutes.
Our plane arriving at Puerto Jiminez: 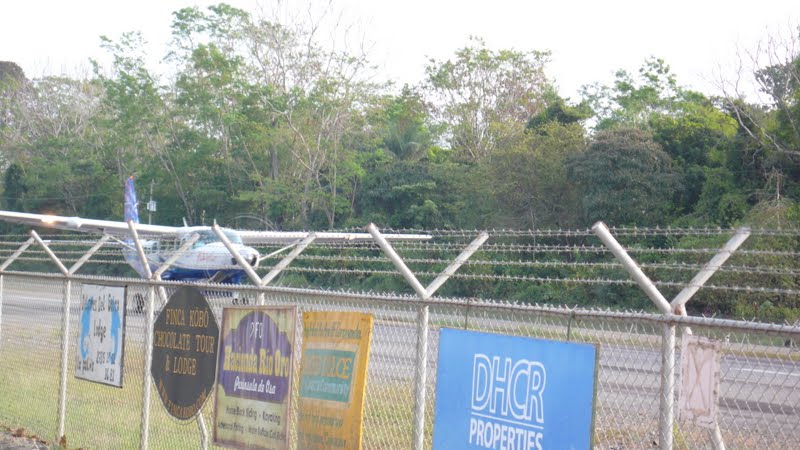 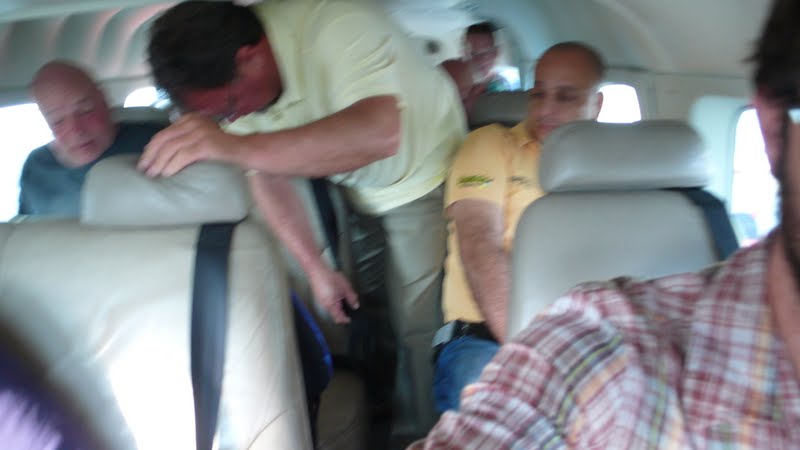 The flight was the two travelers from Corcovado and a bunch of middle-aged fishermen finishing a trip to “Crocodile Bay,” some sort of fishing resort. Flying in Costa Rica domestically in the Caravan (or the Twin Otter also flown by NatureAir) provides a great view of the country—and it’s a beautiful one.
The “office” of our Cessna: 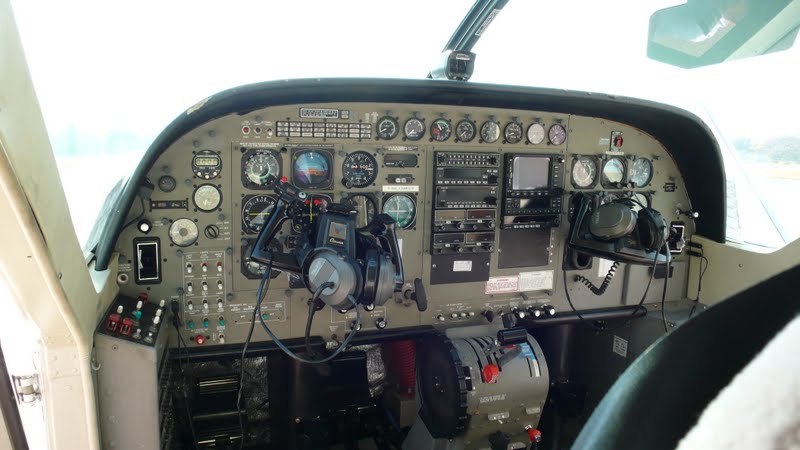 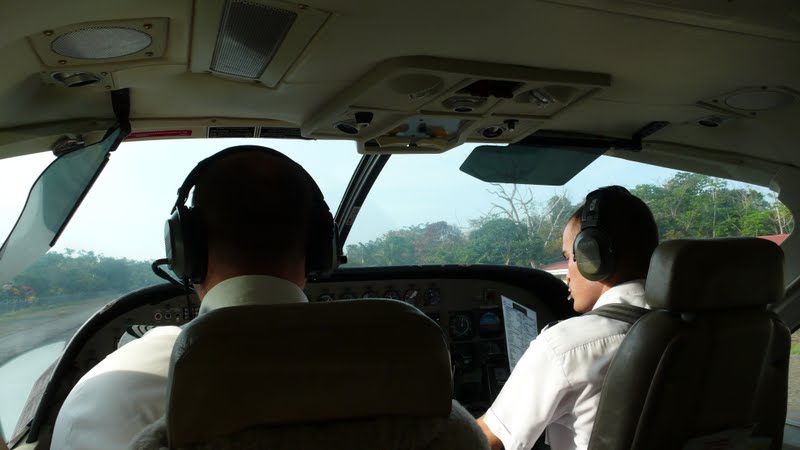 Taking off from Puerto Jiminez: 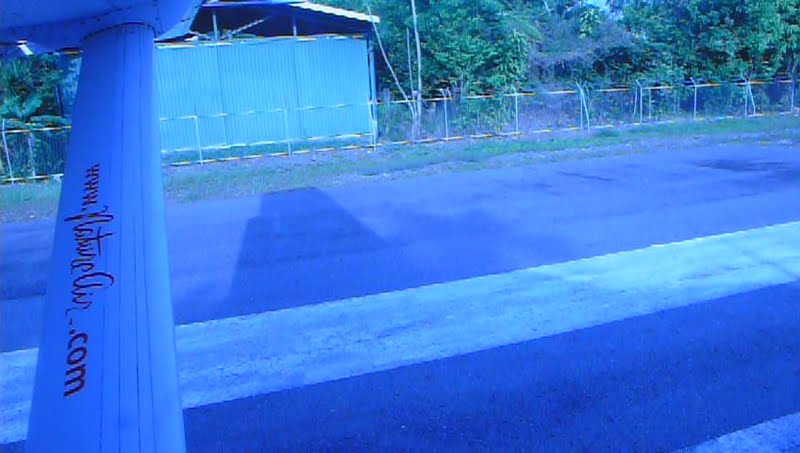 We landed smoothly at San Jose Tobias Bolano Airport in the neighborhood of Pavas; the airport is known locally as Pavas Airport. Here is the NatureAir “baggage claim”: 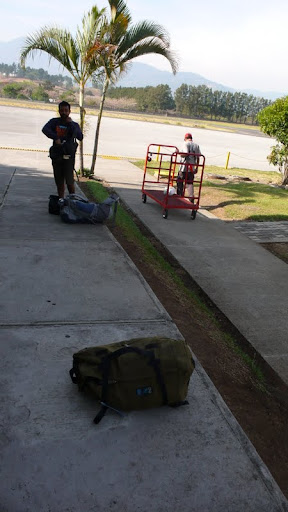 And a few pictures of our plane and the Pavas ramp: 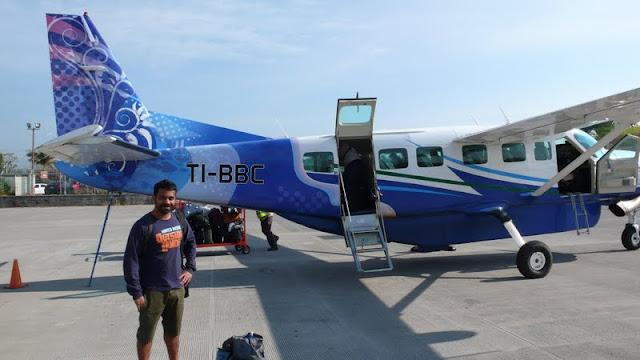 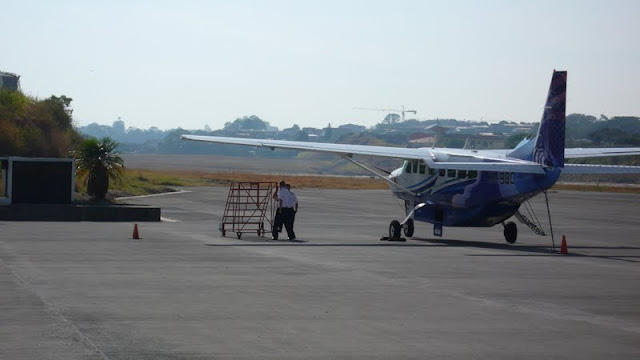 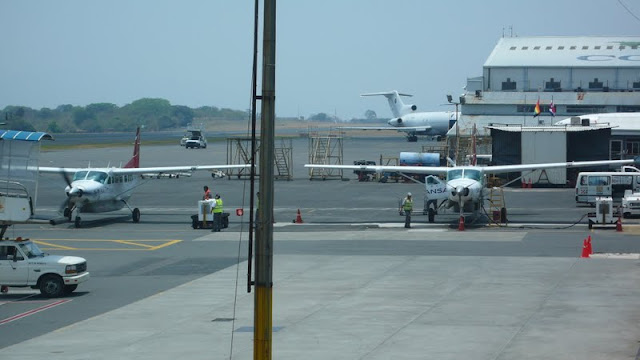 If you transit through Pavas, I recommend the restaurant upstairs for one of the more casual and enjoyable airport restaurants anywhere. For about $7 a person we had made-to-order omlets with cheese, onion and ham, plus beans, potatoes and plantains, plus coffee and orange juice, all served with a smile. 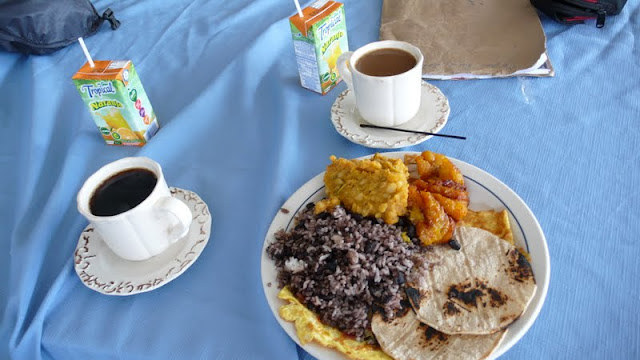 After breakfast it was time to take a cab from Pavas to the international airport in the neighborhood of Alajuela (SJO). We bypassed the hawkers in the entrance and took an “official” red cab, which still set us back $25. 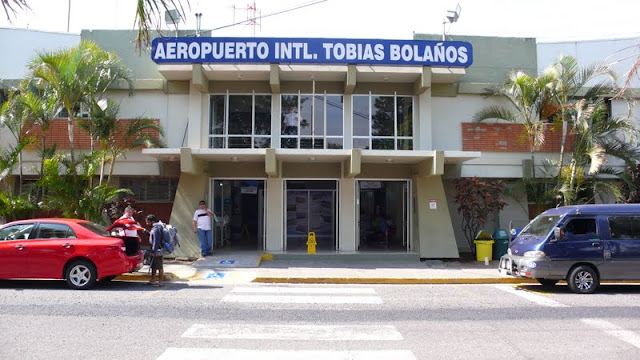 Upon arriving at SJO, I said goodbye to my friend and checked into the priority counter at United, which also serves United Business passengers. 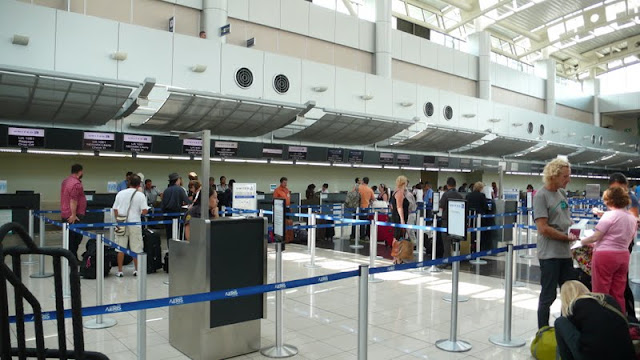 I asked the ticket agent about the business lounge, and he informed me that there was no complimentary lounge for United passengers in San Jose. Instead, there was a new executive lounge, but I had to pay for it unless I had a certain Mastercard or AmEx. I thanked him and went my way. 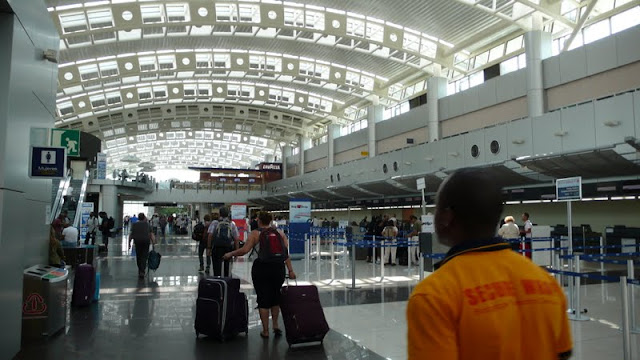 The SJO duty-free is not one of the vast mini-malls that you find in some international airports, but rather tucked away and quite compact. I bought a $7 bottle of Cacique, which kind of felt like they were paying me to drink.
I then wandered the international terminal and encountered not one but two executive lounges, one upstairs and one downstairs from the main floor. The upstairs club allowed *Gold but said nothing about United, but the downstairs Copa club declared it was “in partnership with United.” I inquired if United first customers could use this lounge, and was told “of course.” And in we go… 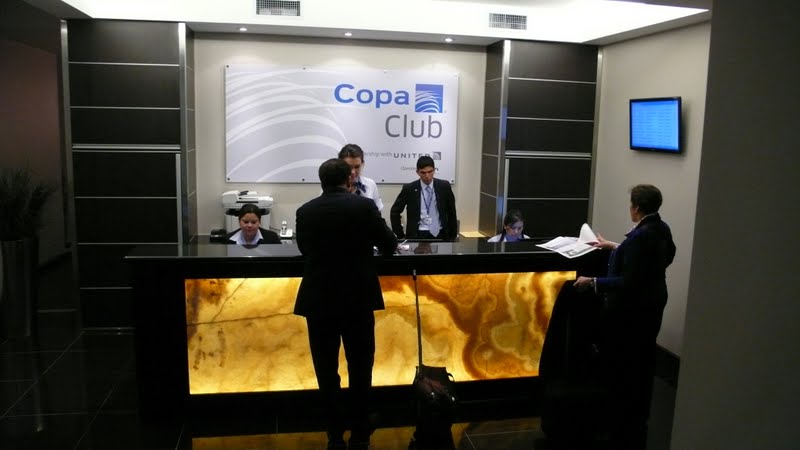 Nice fruit and decent coffee at the buffet (had a ticket to get an espresso at the bar but didn’t check it out.) 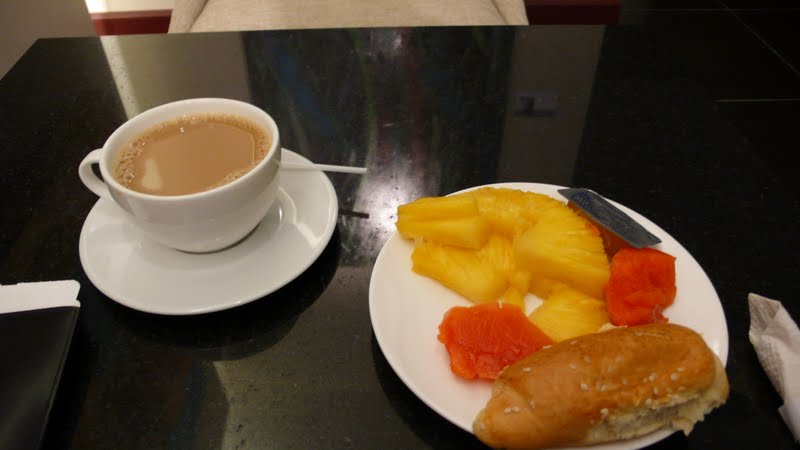 The lounge was nice enough… for a windowless basement. Some pics: 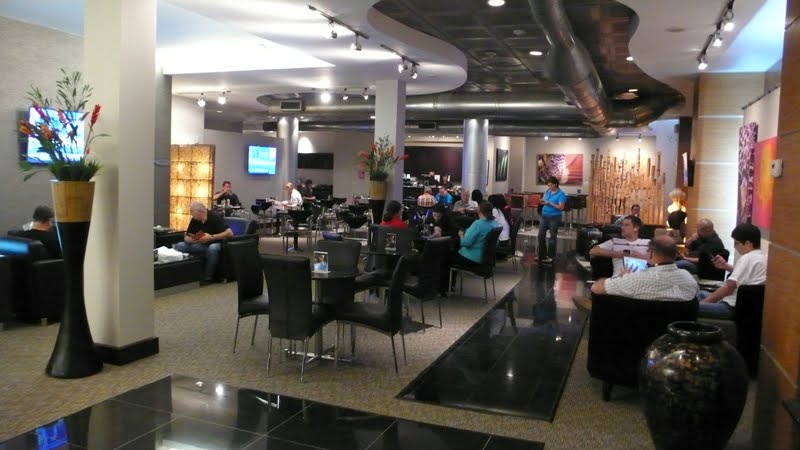 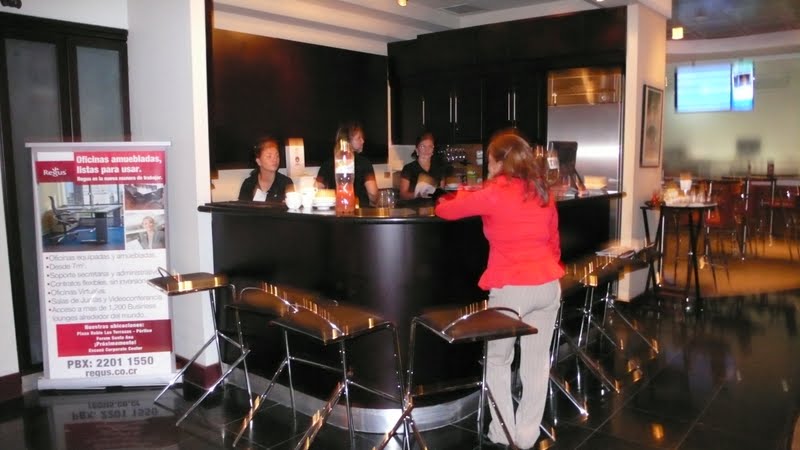 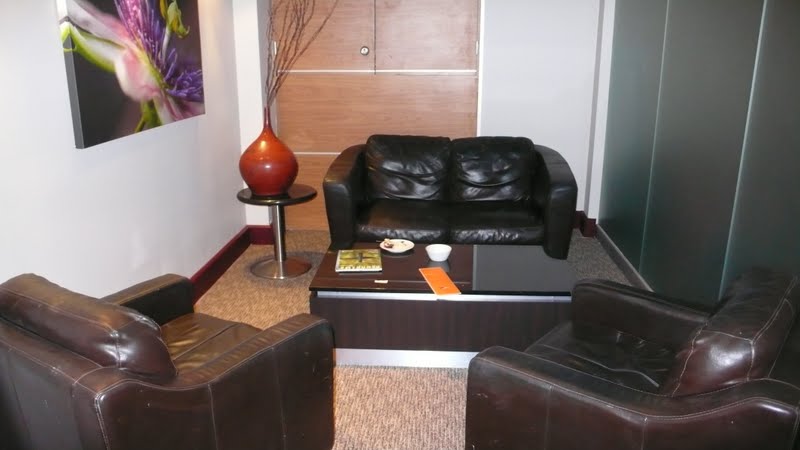 By the time I left, I noticed that the buffet was pretty much empty. 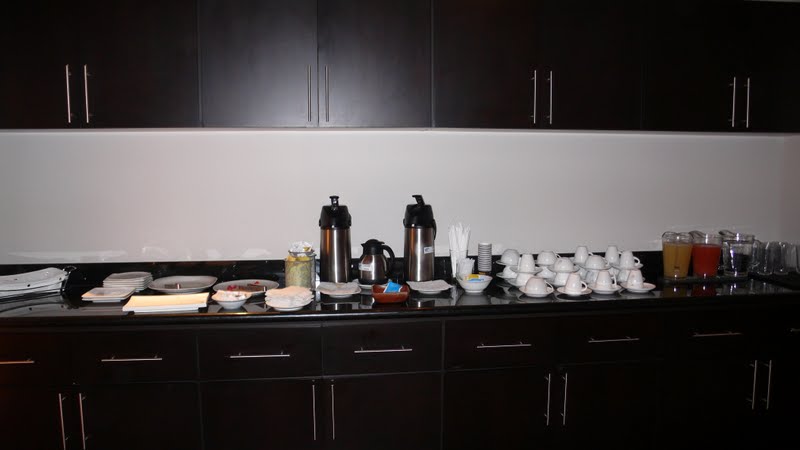 After a half hour of enjoying fruit and coffee, I headed for the gate: 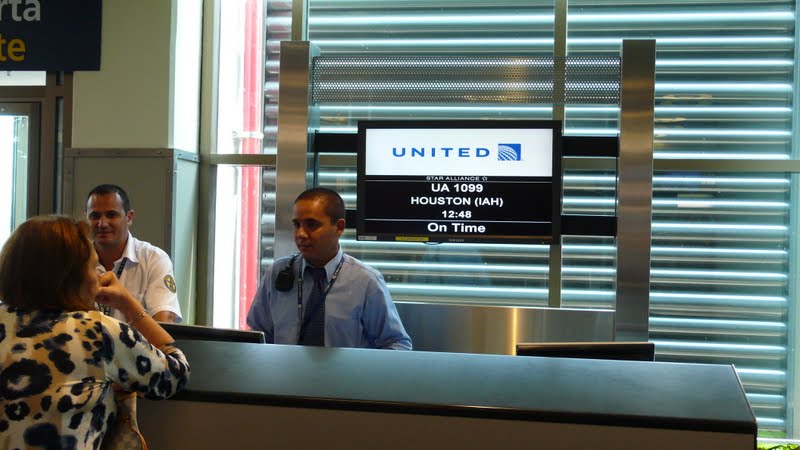 UNITED AIRLINES
FLIGHT 1099
SJO-IAH
DEPART 12:49PM
SEAT: 1E
CLASS: F
Boarding was slow due to secondary screening, but we were eventually all seated. 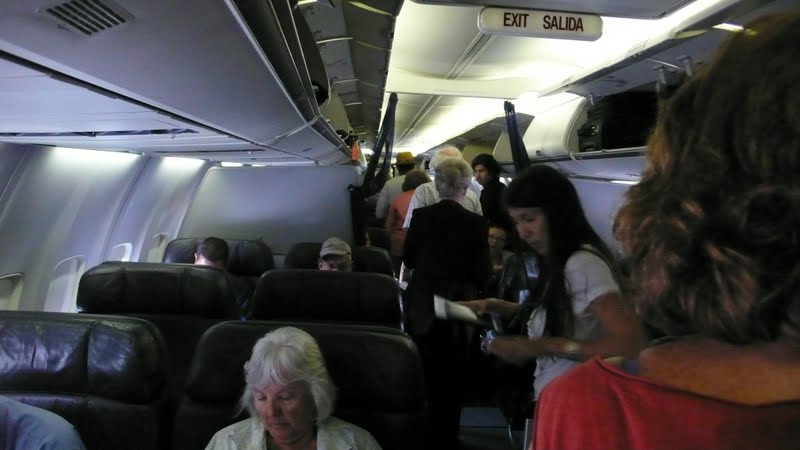 We were offered a choice of beverage, no champagne or sparkling wine so I ordered a white wine (they have one white and one red, no name given). 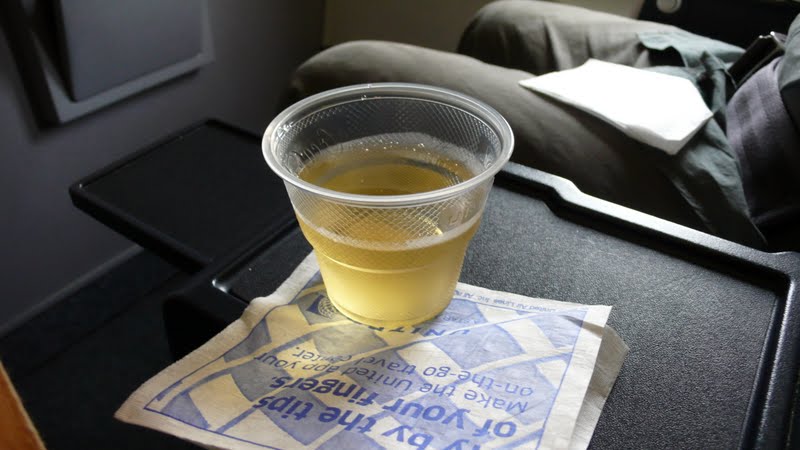 While still on the ground, the FA took lunch orders left to right, front to back. Menus have been eliminated. Two choices for lunch: mixed grill (small filet plus chicken) or seafood risotto. For those who know old Continental catering, this was a tough call: these are both classic old CO entrees. I had the seafood risotto on a memorable redeye about eight years ago on a LIM-IAH 757 flight, and that risotto was excellent: flaky, not overcooked, and full of fish and other seafood (best redeye meal ever, I think).
I was surprised that the merger has caused such a major decline in catering. Like many CO fliers I had hoped that the merger would improve United’s awful catering, but the appearance of the aluminum cup with the main course suggests the opposite has occurred. There was no menu, no ramekin, no tablecloths, no salt/pepper shakers. At least there’s still towels: 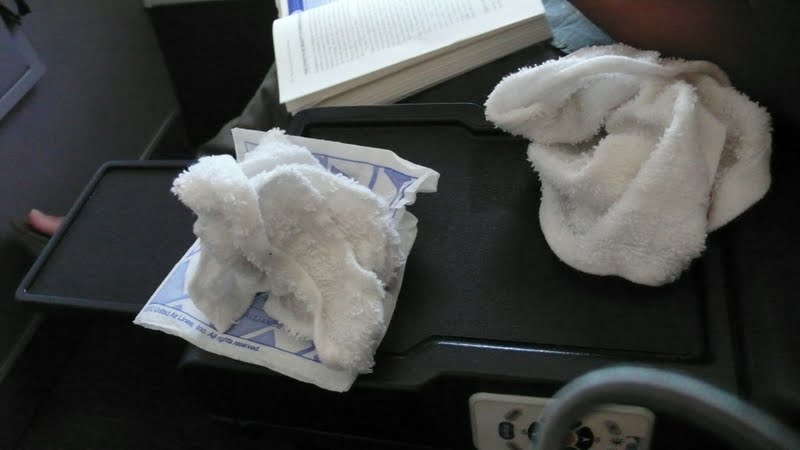 To begin with, a pour-your-own-vodka bloody mary and packaged nuts in United international business: 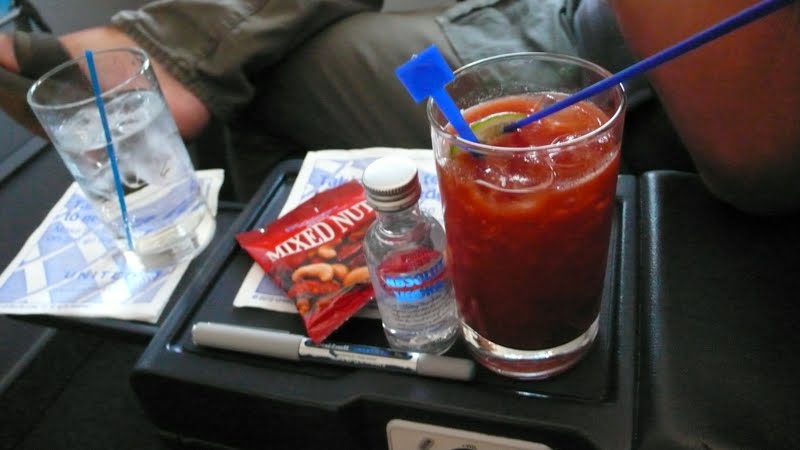 Here is the risotto, which I originally mistook for the appetizer. I made this mistake because there was no appetizer. 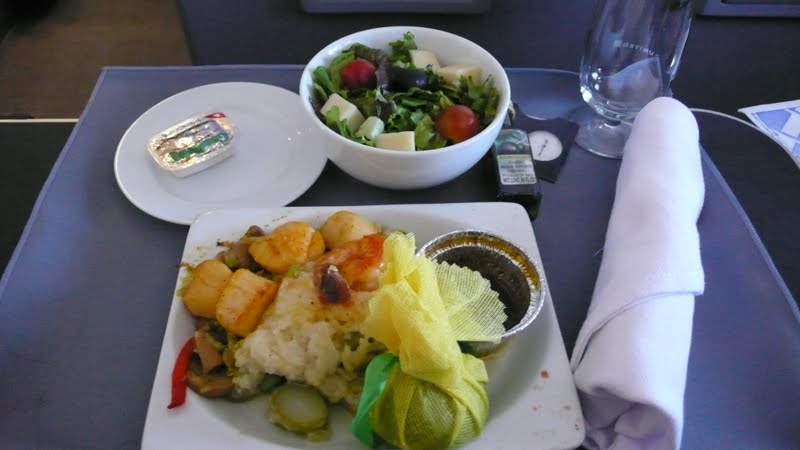 There was a single bread run (not pictured) of warm white or wheat roll. The risotto was less rice than mush, the seafood minimal and overcooked. The mysterious aluminum cup contained liquid butter, I think, though I was never positive. The little cup is the Mark of United on this dish. The salad was good though.
Afterward they served desert, a small slice of plain cheesecake. 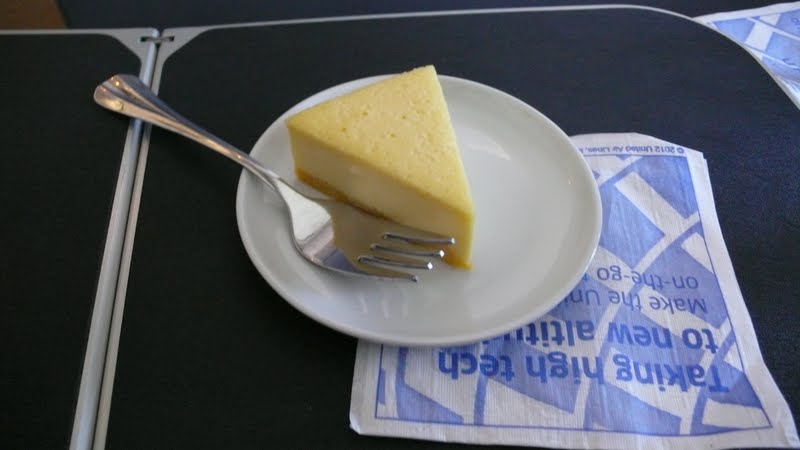 The meal was decent but not filling and not well presented; I would give it a C-. Service was friendly, though when I asked for a pillow I was told UA did not carry pillows since H1N1. I was told this, even though I had received a pillow in coach on UA on the SFO-IAH redeye the week before. The rest of the flight was uneventful, and made faster by the excellent movie selection on the personal IFE. I may have been lucky, but the selection included Argo, Lincoln, Wreck-It Ralph, Hitchcock, Life of Pi, to name a few. Really a good selection even when DirecTV was not working. Do these movies come with the DirecTV package in coach or do you have to pay extra? Maybe this is why there were so many good films? For an F passenger it was much appreciated

Upon arrival in IAH I waited almost an hour in immigration. I thought this was bad (as a US citizen) but my travelling companion, who has an Indian passport with a US visa, was in line over three hours and missed his connection. I guess misery is relative...

The 7:16 PM flight to SFO was uneventful, made better by the great IFE and the lumbar supports on the old CO F seats. Even though the flight’s scheduled departure was 7:16PM there was only a snack service on this nearly four hour flight. 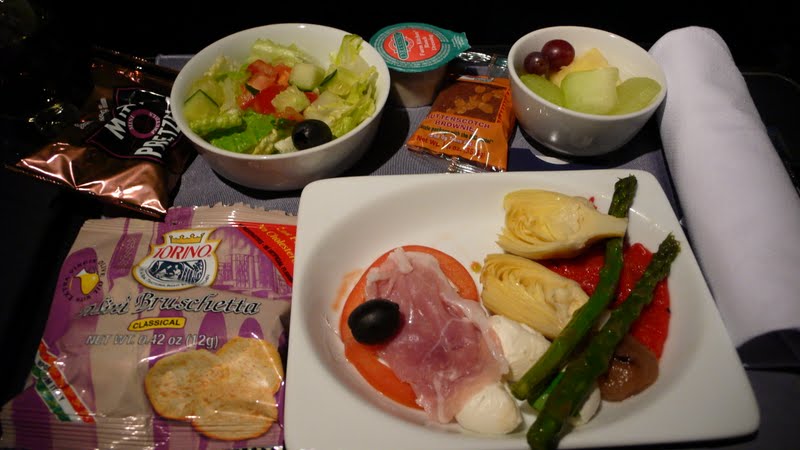 This “snack” is made better by adding a salad and fruit, but there is only a slice of ham and a few flavorless mozzarella balls as the protein. Not good, but still I guess it’s better than nothing. Update: As I’m finishing this report a few weeks later I was checking the flt numbers and saw that UA retimed the flight to leave at 7:11 … so now it’s a dinner flight. Problem solved!

All in all, a good trip with United and a great little flight with NatureAir. Thanks for reading!

Good report! Thanks for sharing your trip with us!

Here's a link to one of my recent reports that shows your snack is very similar to the one I had on my IAH-MSP flight. It was a good snack, but we were hoping for a larger meal.