I’ve spent this summer at National Taiwan University in an intensive Chinese language program.While preparing for the trip, Realizing I had enough AAdvantage miles, I decided to purchase a free round-trip on American. After a long “discussion” with AA booking about a possible itinerary I used points to purchase San Diego-Tokyo (Narita)- Taipei (Taoyuan) on AA partner Japan Airlines and TPE-NRT-ORD-TUS on JAL and AA for the return leg in August once the program was over. So, without planning it, I had ended up on one of Japan Airlines’ 787 routes only 2 days after the Dreamliner would be put back into service!

DEPARTURE
My journey to Taiwan began with a standard morning commuter flight from Tucson to San Diego on Southwest Airlines. I had checked in online the day beforeso checking my bag was a breeze. By 9:00 boarding had begun and, after a quick pushback and taxi across the quiet tarmac to the runway, we were rocketing out of the desert.

Deserted and very hot tarmac at TUS. Glad to be getting out of summer in Arizona.

US CRJ9 Preparing for a short hop back to Phoenix 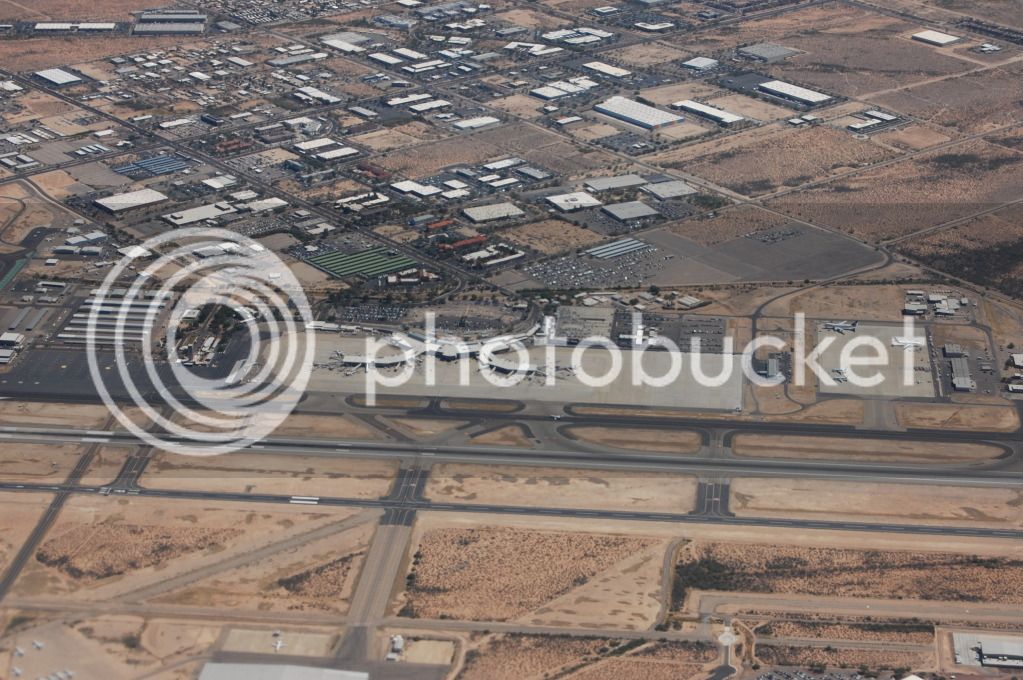 Birdseye view of TUS. Looks like a miniature SEA

Climbing out over the Sonoran Desert. Goodbye AZ!

IN-FLIGHT/ARRIVAL
As is usually the case with this morning flight to San Diego, the flight was not full and I had a whole row to myself. About 40-45min after departing Tucson our plane began descending over the San Diego suburbs and had an on-time landing. That day/night was spent visiting friends in San Diego for one last hurrah before going abroad for the summer. 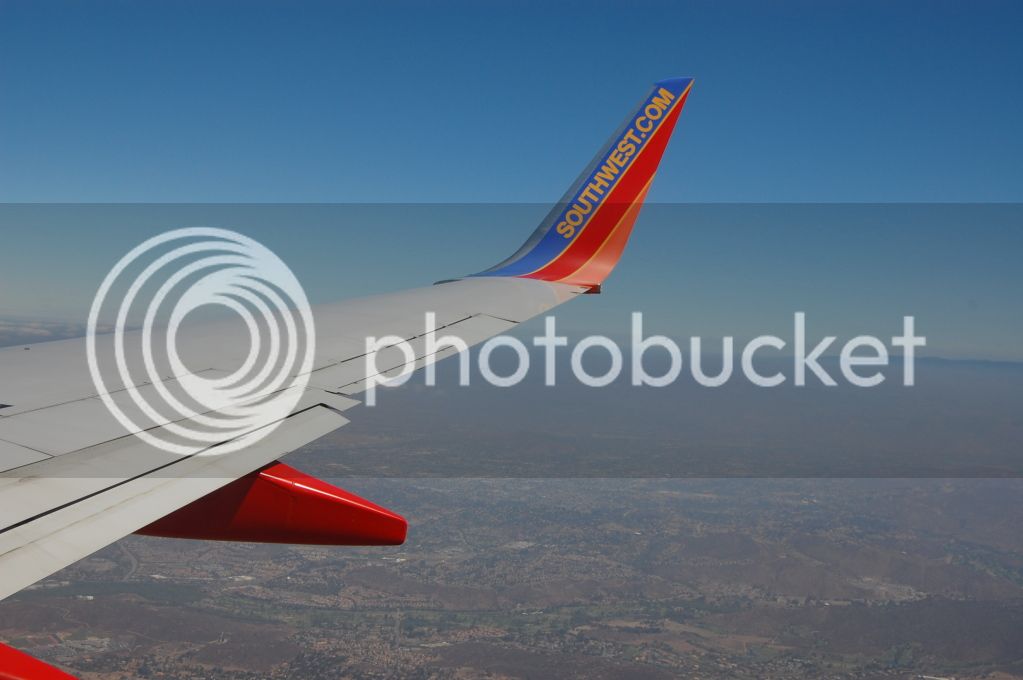 Approaching over the San Diego hills

passing by UA, one of the other operators out of T1

CHECK-IN/SECURITY
I arrived at SAN about three hours before the flight. Of course looking forward to experiencing the 787 left me impatient and ticketing/security seemed to be an extra long process. Check-in for JL65 happened at American Airlines ticketing area in SAN Terminal 2. Being long-haul flight with a larger number of passengers, the ticket hall was very crowded. The majority of the passengers for JL65 were Japanese nationals however there were a good number of Americans as well as others heading to destinations beyond Tokyo. The agents nearly checked my bag all the way to Taipei when I told them I was overnighting in Tokyo.

Security was equally busy. On top of all of the Tokyo-bound passengers, a number of AA, JB, VX, and NK flights were also departing around the same time however I thought TSA did a nice job. The agents kept the line moving but were also friendly and patient, particularly with the passengers from overseas. Well done, SAN.

GATE/BOARDING
The international gate area in Terminal two was packed. In addition to JAL’s Narita flight, and Air Canada flight was departing around the same time to Toronto. With no seats to be found I decided to walk around and take a few pictures.

And now for something completely different.....N522NK arriving from DFW

VX taxiing out for departure to JFK

An inuit with a lei in San Diego.

Preparing for return flight to DFW

Another view of that magnificent work of art I mean airplane

Boarding was called around 12:50 and lines immediately began to form. An attempt was made to board business class and elite status passengers through one door and the masses through another but no one seemed to understand. I enjoyed seeing the non-Japanese San Diego ground staff, obviously enthusiastic about this new service, bowing and trying a couple of courtesy phrases in Japanese. It was certainly a nice touch.

Walking down the long international jetway to our plane
I felt a little strange as I boarded an Asia-bound flight out of San Diego. In the past for international flights the points of departure were always LAX, SFO, ORD, etc. Although San Diego is one of America’s busiest airports it is still exciting to see this kind of international service.

Glimpse of business class. It looks Simpler than the likes of EK, EY, etc. but put together and comfortable

from my seat. Economy class is separated into smaller sections which gives a more intimate atmosphere

Following a safety demonstration in Japanese, Chinese, and English JA824 began to slowly, carefully push back from its gate until it was lined up adjacent to the runway. Taxi to the runway was without congestion and we were soon in the air after an amazingly short takeoff and a steep climb over the Pacific, 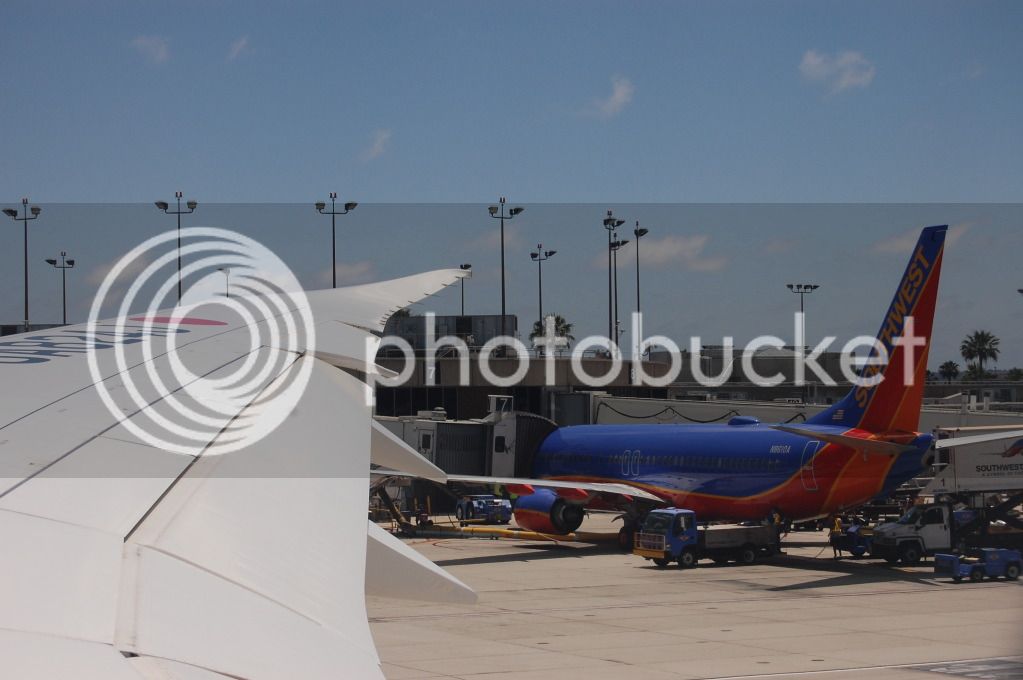 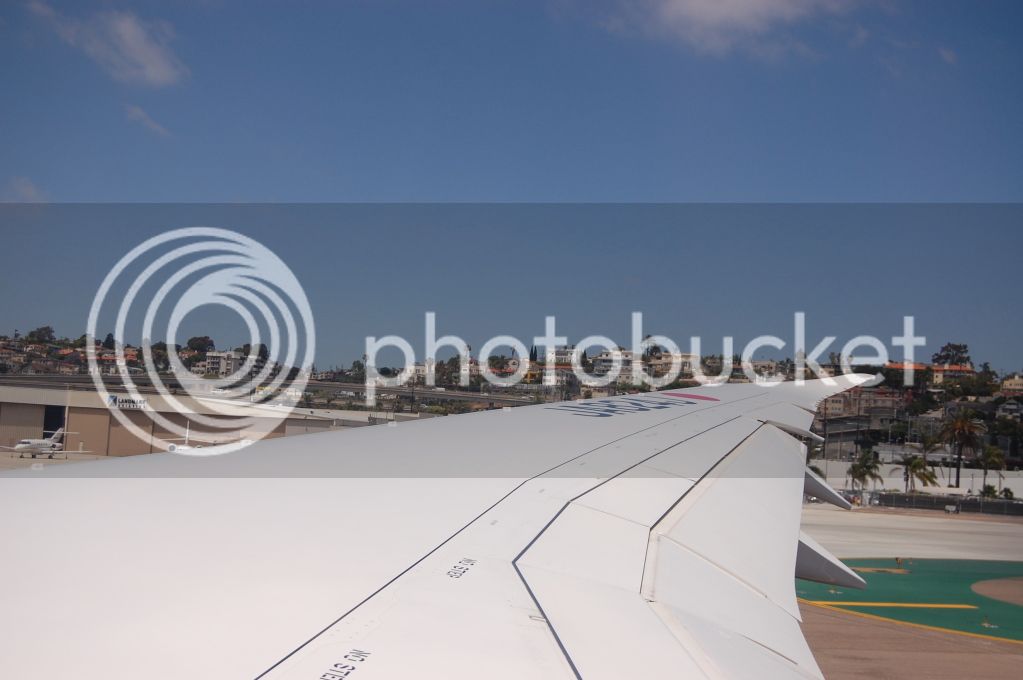 IN-FLIGHT
The in-flight service throughout the flight was, in my opinion, very well done. Over San Francisco the flight attendance started the lunch service. I opted for the “San Diego option” which was a sort of Mexican casserole. It wasn’t bad. The In-flight entertainment kept me distracted for the rest of the 10 hours. My last experience with IFE in economy was AA from Shanghai to Chicago on one of it’s older 777-200s so this was certainly a nice upgrade. 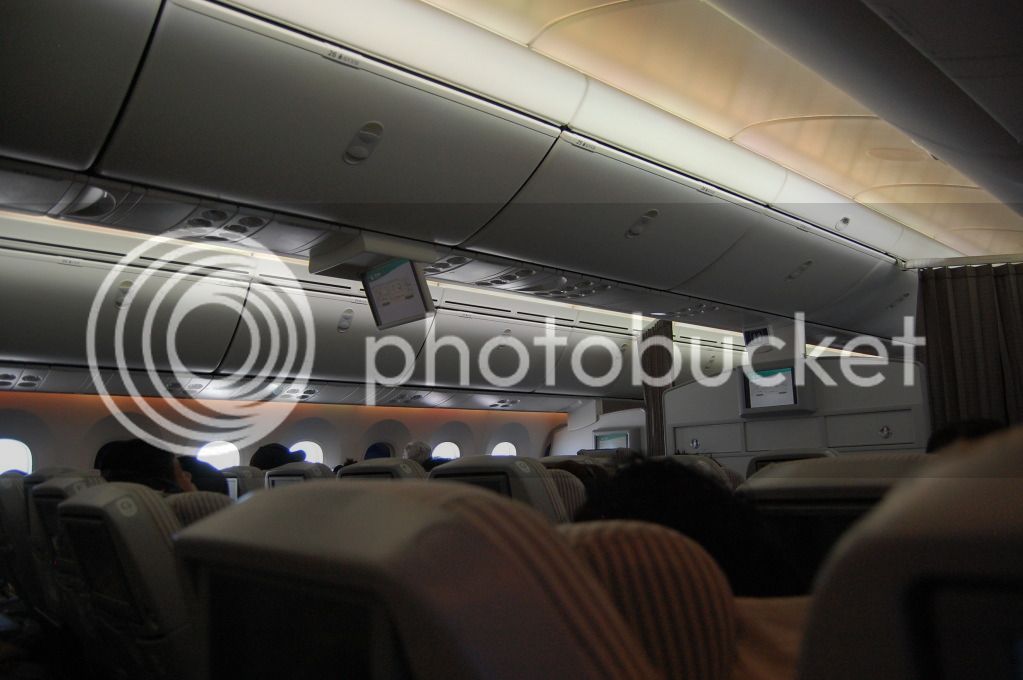 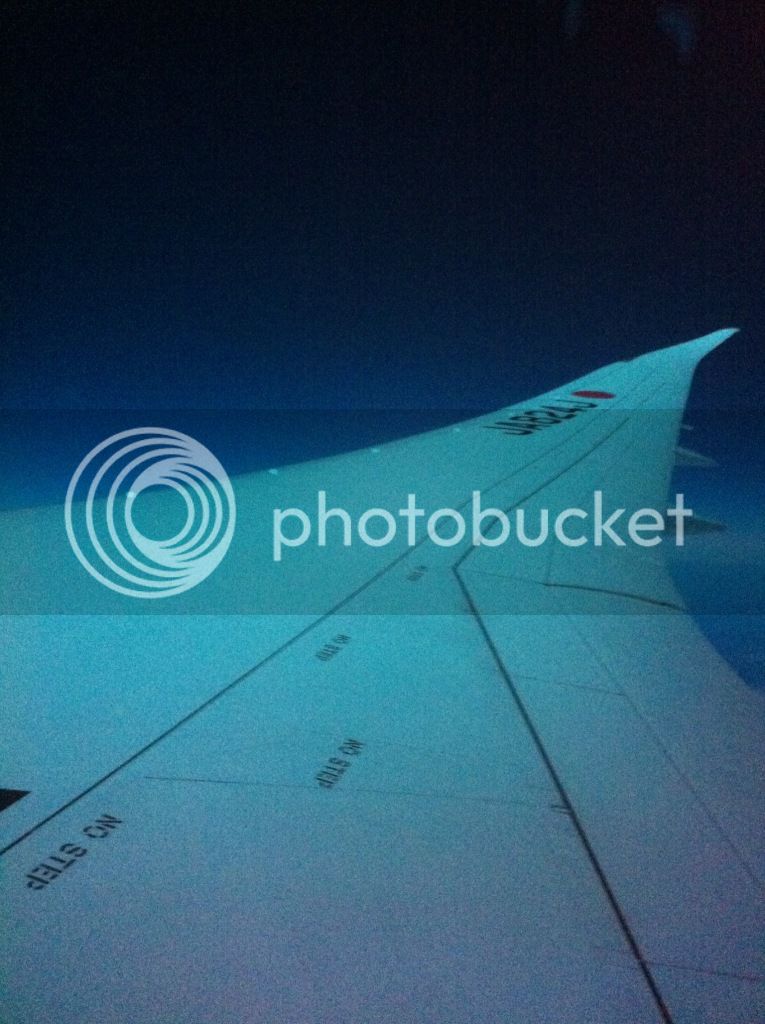 Those windows. Feeling like I am inside an aquarium

What I can’t get over was the 787 window feature. When the cabin was darkened the windows were all “tinted” (for lack of a better word) making the experience very calming with a kind of twilight effect on the cabin.

In addition it was certainly the quietest flight I have ever taken.

Throughout the flight a total of three different people asked me if I was in the US Armed forces heading to Okinawa. I found this kind of funny.

ARRIVAL
As we descended over Chiba Prefecture I snapped a few more pics of that glorious wing. Landing at Narita was very smooth and there were no holdups with our taxi to the gate. We arrived at gate 83 in Terminal 2 surrounded by JL763s and the occasional oneworld partners.

Start of descent into Narita 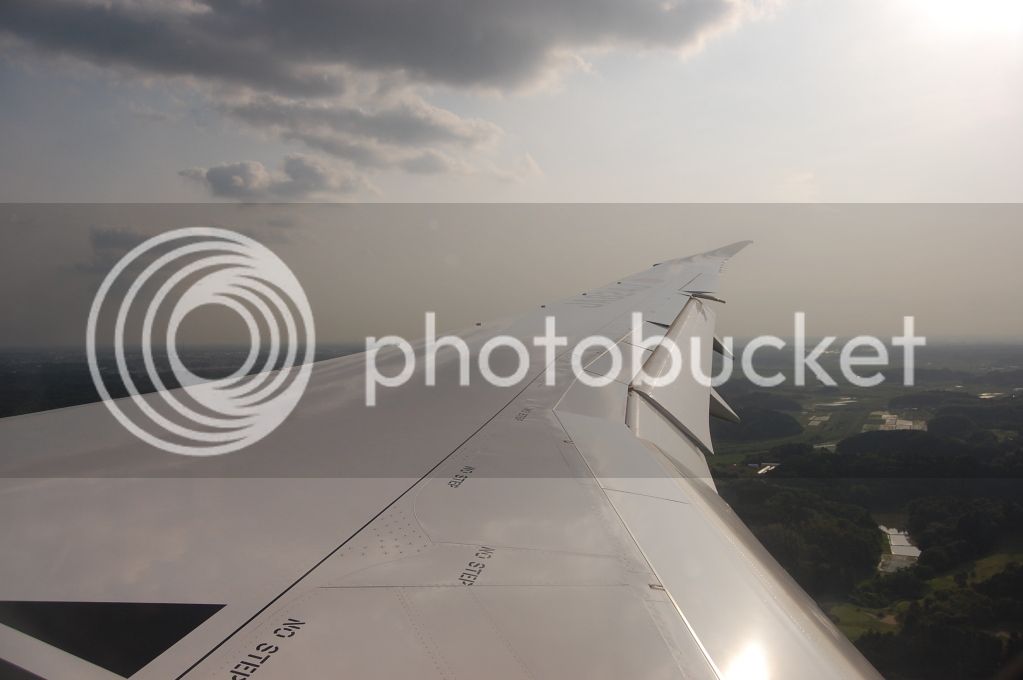 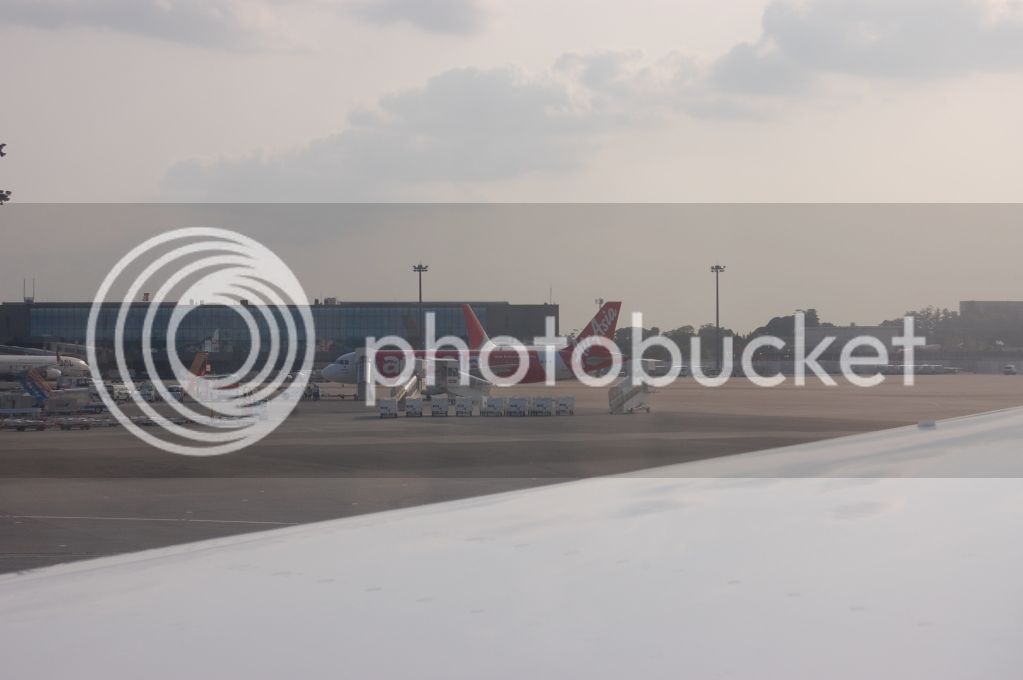 Spotted Air Asia Japan. Sad to hear it will soon be gone after only a year.

Deplaning. Can't get over the aesthetics of this aircraft. So thankful to have the privelege of flying on this plane on one of JAL's newest routes


Narita is a fantastic airport to arrive at (or at least Terminal 2 I cannot speak for T1). It was clean, orderly, comfortable and easily navigable. Once I had claimed my bags I headed to the Hilton near Narita airport.

CHECK-IN/SECURITY
After a relaxing night at the Hilton I checked in for the final leg to Taipei. Of course, like an idiot, I left my boarding pass for the flight and other papers from check-in in San Diego back in the hotel room. This was a brief problem for the ticketing agent at Narita and check-in took slightly longer. Fortunately, due to my early arrival at the airport there was not much of a line. The swift security process at airports outside of the US always pleasantly surprises me. Once I was through security I walked around for an hour in the vacant terminal. Asian and European flights began arriving in the late morning so I took a break in seating area (with a view of course) and watched some of the traffic. 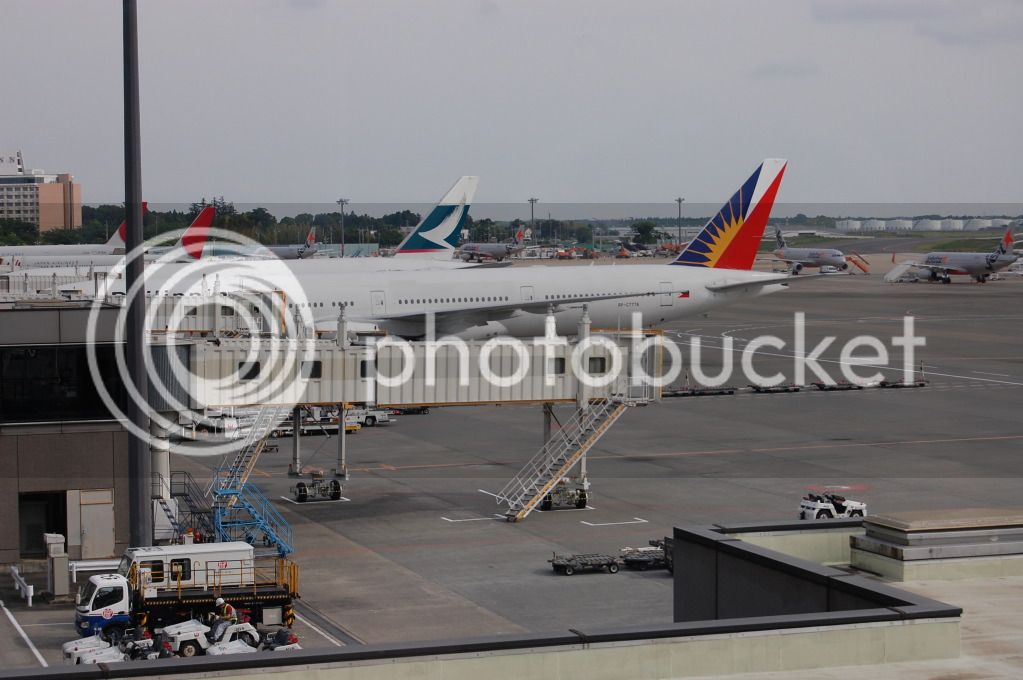 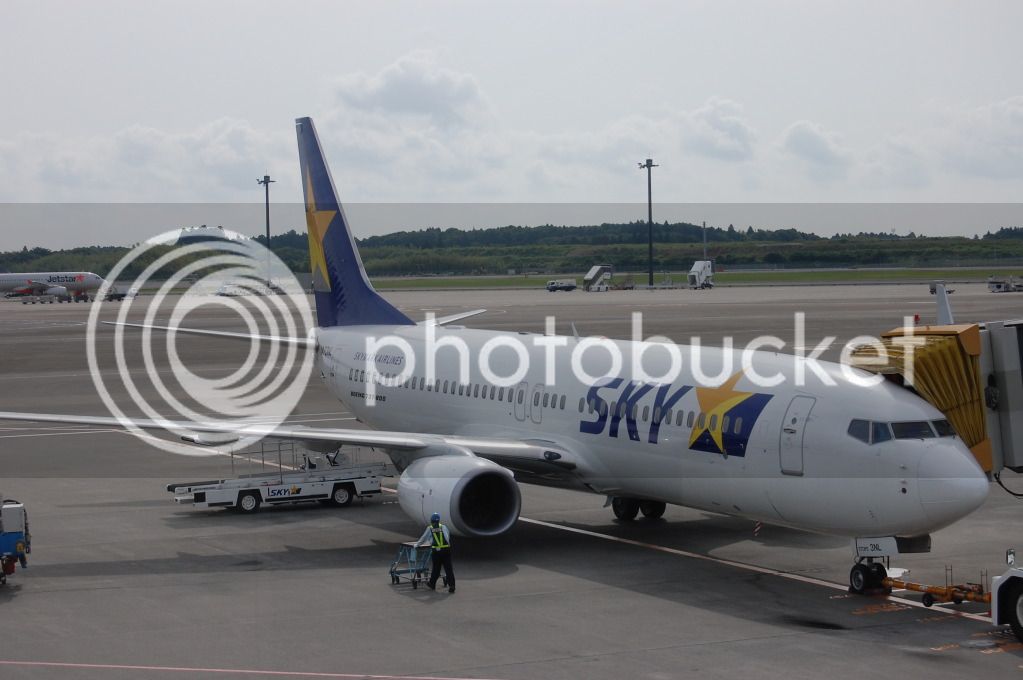 Quiet tarmac with 777s parked for flights later that morning/afternoon

Heading to the "mainland"

Here's one I don't see in my corner of the world! Finnair A340-300 arriving from HEL

UA arrival from an Asian destination possibly BKK or SIN

Another new one for me!

SU A330-300 arrives from Moscow Sheremetyevo 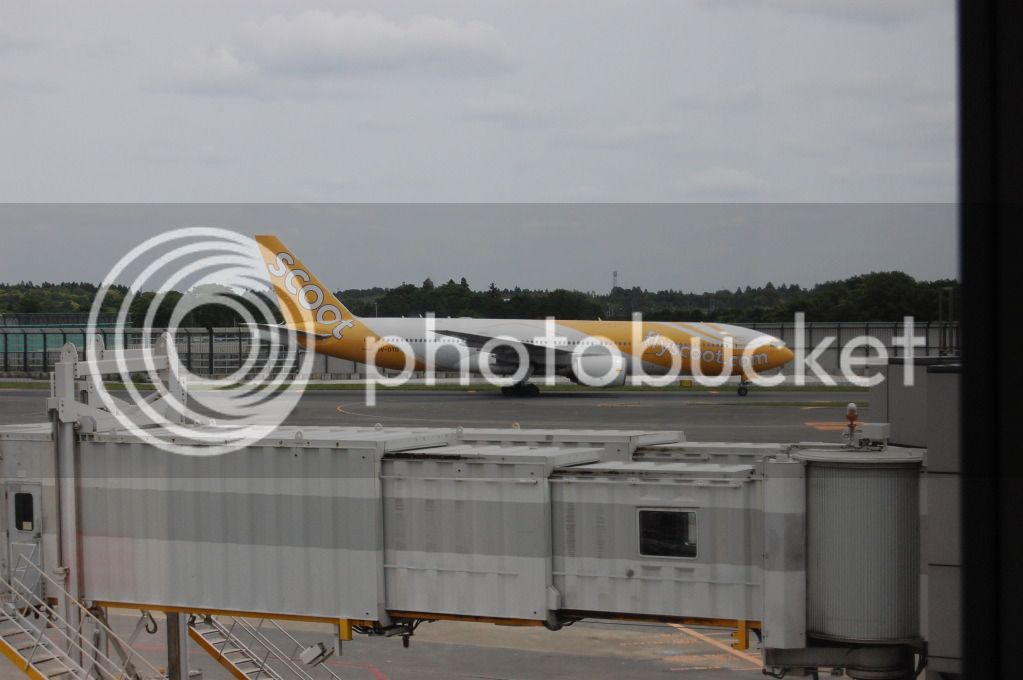 Scoot 777 brightening up the cloudy day

BOARDING/DEPARTURE
The flight to TPE seemed to be only 75% full in economy. We taxied to the runway on the opposite end of the airport meaning great views of Terminals 2 and 1. 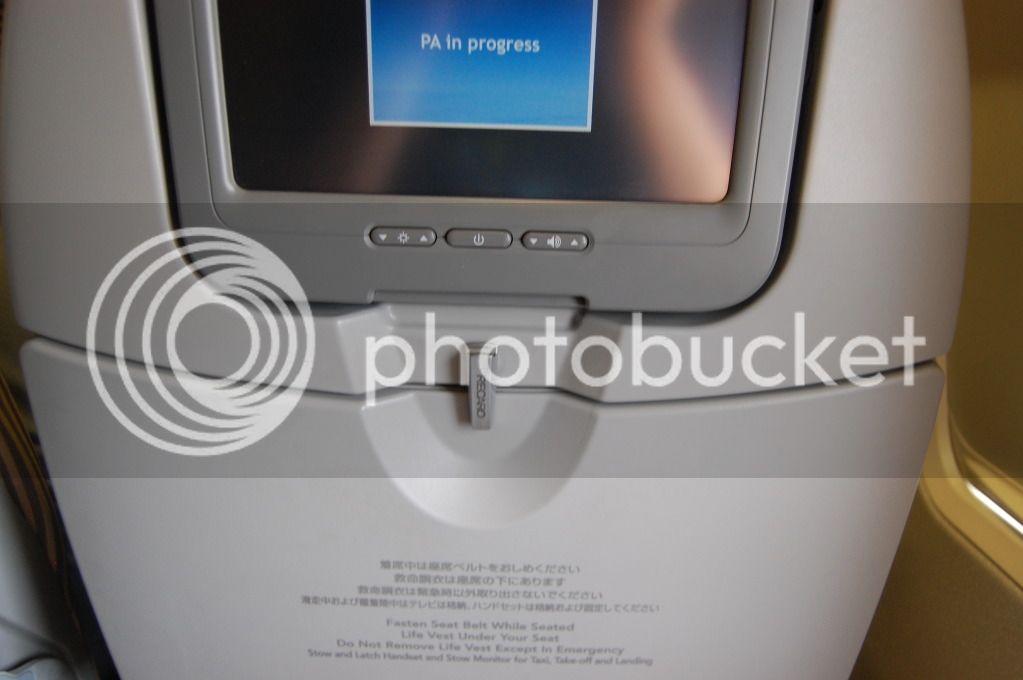 PTVs even in the newer narrowbody aircraft. Well done, JAL

As we taxied out I noticed this new arrival from Moscow (Vnukovo?)

began taxiing around Terminal 2 to the opposite runway. 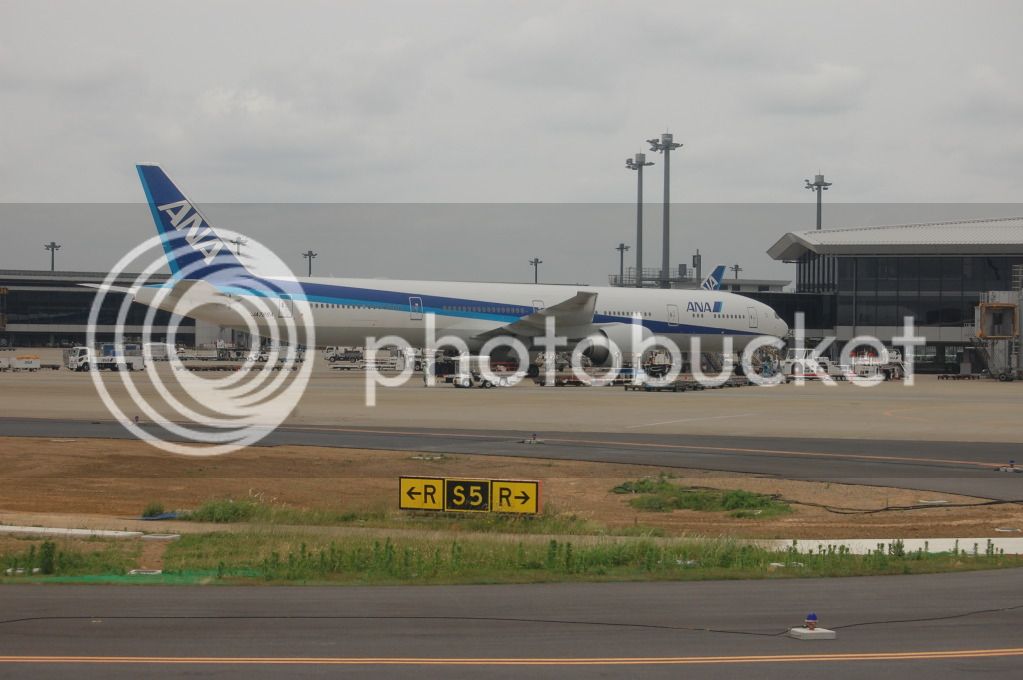 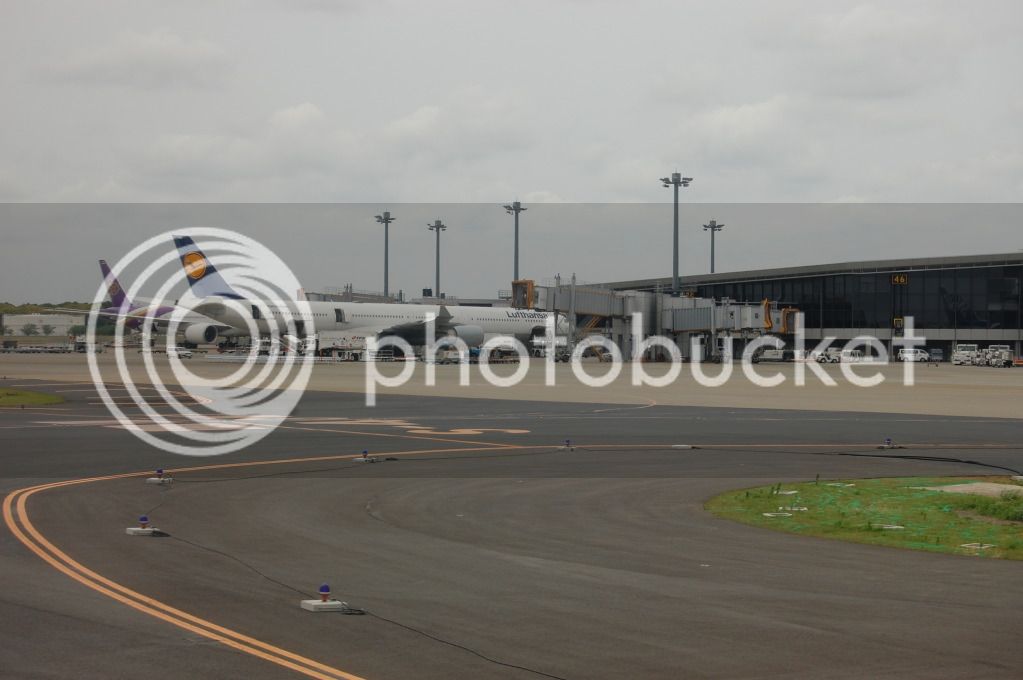 LH and TG parked at the gate

TG really has one of the best color schemes out there

Turkish from IST. Another airline I hope to try out very soon
Top

I love your TR. I hope to have an opportunity to fly the dream liners. BTW, why are you studying at NTU for Chinese?
I thought most program are with ShiDa instead of Taida?
Keep up with your TR!
Top

Nice report so far. I'm booked to fly HEL-NRT, KIX-PVG on JL next month on the 788 and 738, so this has come at the perfect time! Hope to see some more pics from the NRT-TPE leg soon.
http://my.flightmemory.com/shefgab Upcoming flights: AMS-RIX-BUD-VDA,ETH-TLV-FCO-LHR,STN-TXL-LCY,LTN-CPH-LTN,LGW-SZG,MUC-LHR
Top


Probably DME, but Transaero also has many flights from VKO as well
FlyingFinn76, abrelosojos
Top

Sorry, I can't see any picture, seems you have exceeded photobucket bandwidth...
Top

Here is the continuation of my (excessively) long trip report

OZ744 preparing for a flight back to ICN. Coincidentally I flew on this exact same aircraft between LAX and ICN in the summer of 2007!

Honestly I was a little surprised to see VS send an A343 to NRT. I thought this was an A346 route usually

Passing Vladivostok avia as we neared the end of the runway

Beginning our takeoff roll down the runway

Climbing out over Chiba Prefecture

INFLIGHT
Japanese-style lunch was served as we flew over Osaka. The passengers around me were all elderly Taiwanese members of a charity organization returning form a trip to Japan. The woman next to me naturally had a lot to say in both English and Chinese and we had an interesting conversation. She really had some nasty things to say about the ROC president.

Japanese-style lunch. Despite my apprehension about having a seafood airplane meal it tasted good

ARRIVAL
We began our descent over the sparkling waters of the East China Sea and landed at a hot and humid Taipei Taoyuan Airport. Already the weather was a nice change of pace from my last experiences in Asia. The blue skies and puffy clouds of Taiwan were a sharp contrast to the layers of clouds, dust, haze and smog on my arrival in Beijing in 2011. Customs was a breeze and I was soon on my way to my new apartment in Taipei. 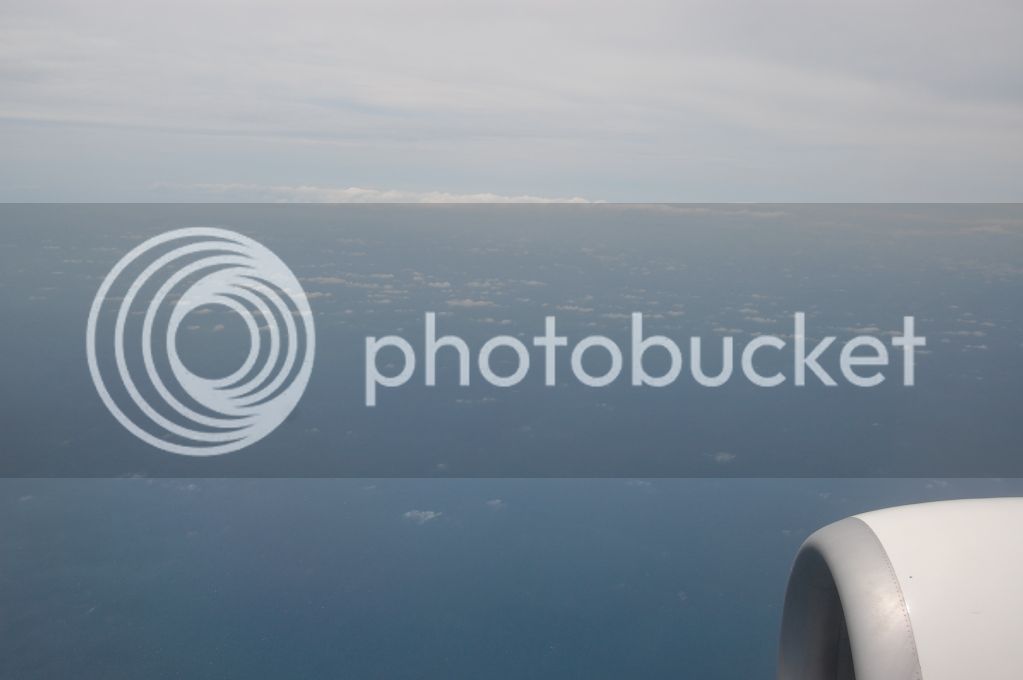 Beginning our descent into TPE

So much green! Very different landscape from where I began my journey

exiting the runway. Sadly no good pictures of the gate area due to where I was seated

CONCLUSION
I had a fantastic experience on Japan Airlines. JAL seems to be very focused on a thoughtful and comfortable product. The Dreamliner was a treat and all of it’s bells and whistles, from the amazing lighting to the low noise levels, made the experience even better. Although the 2-4-2 lay-out was more convenient the legroom was a bit too close. The flight to Taipei was also clean, and quiet, with great in-flight service.

Hope you enjoyed the TR! Any comments appreciated.

Hi and thank you for your trip report. All the pictures showed a message to "upgrade to plus." I'd really like to see your pictures, as one who lived just outside Tokyo for 4 years. Thank you
Have you kissed a 777 today?
Top
Post Reply