This is part 2 and a follow-on to my report on Sichuan Airlines between SYD and CKG.

After getting my baggage I made my way to the bus stop outside the terminal to get the shuttle over to the domestic terminal. Of course, I finally found the bus nowhere near the bus stop!

The domestic terminal was well laid-out and it was easy to find the 3U check-in desks which were quiet. 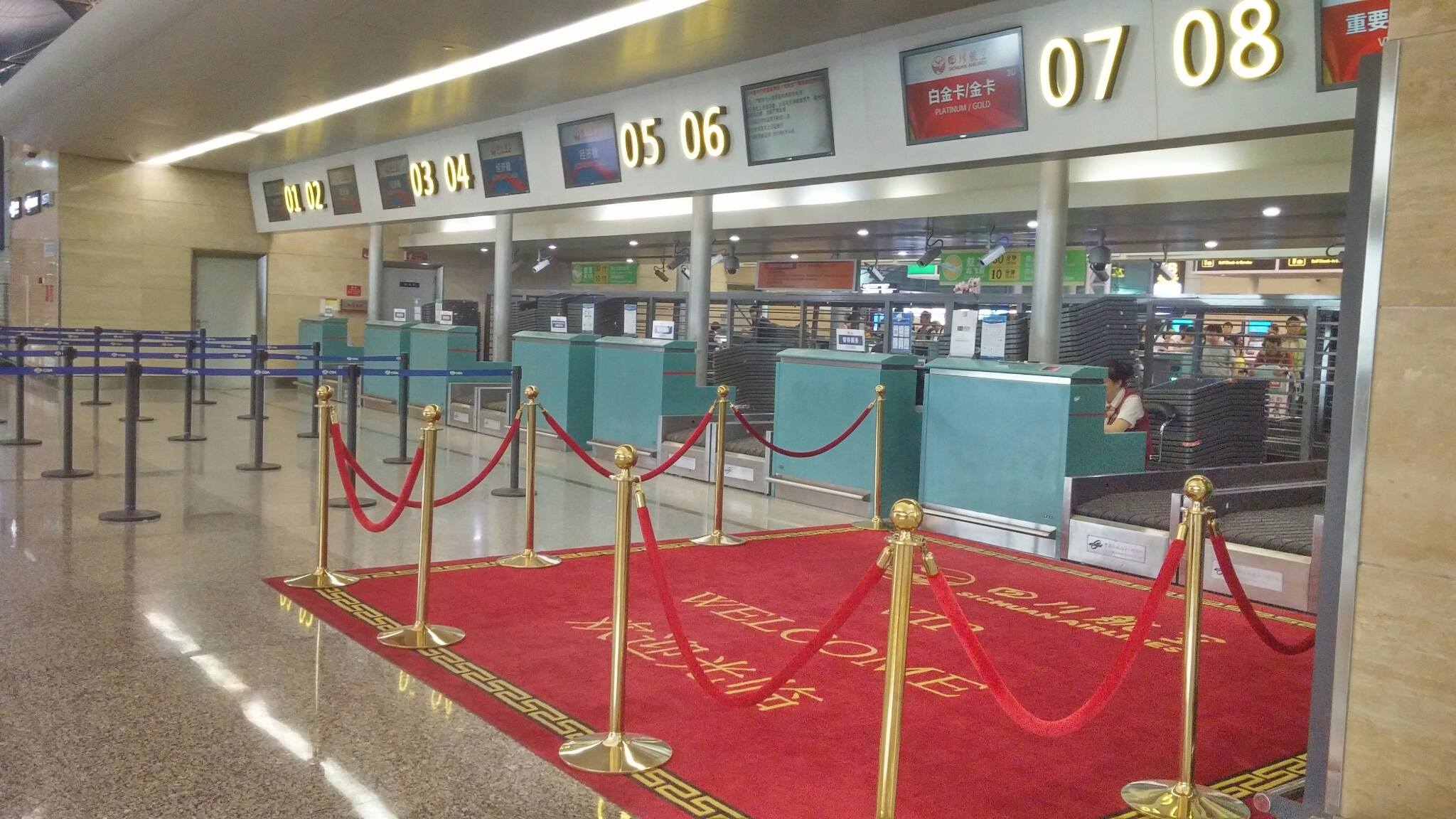 Even for domestic flights in China security is really tight and it took a while to get through. I still had 4 hours before my flight to Wuhan, so I paid $25 to get into the Plaza Premium Lounge which was really lacking in terms of facilities - no showers for example - and the food/beverage options were woeful. 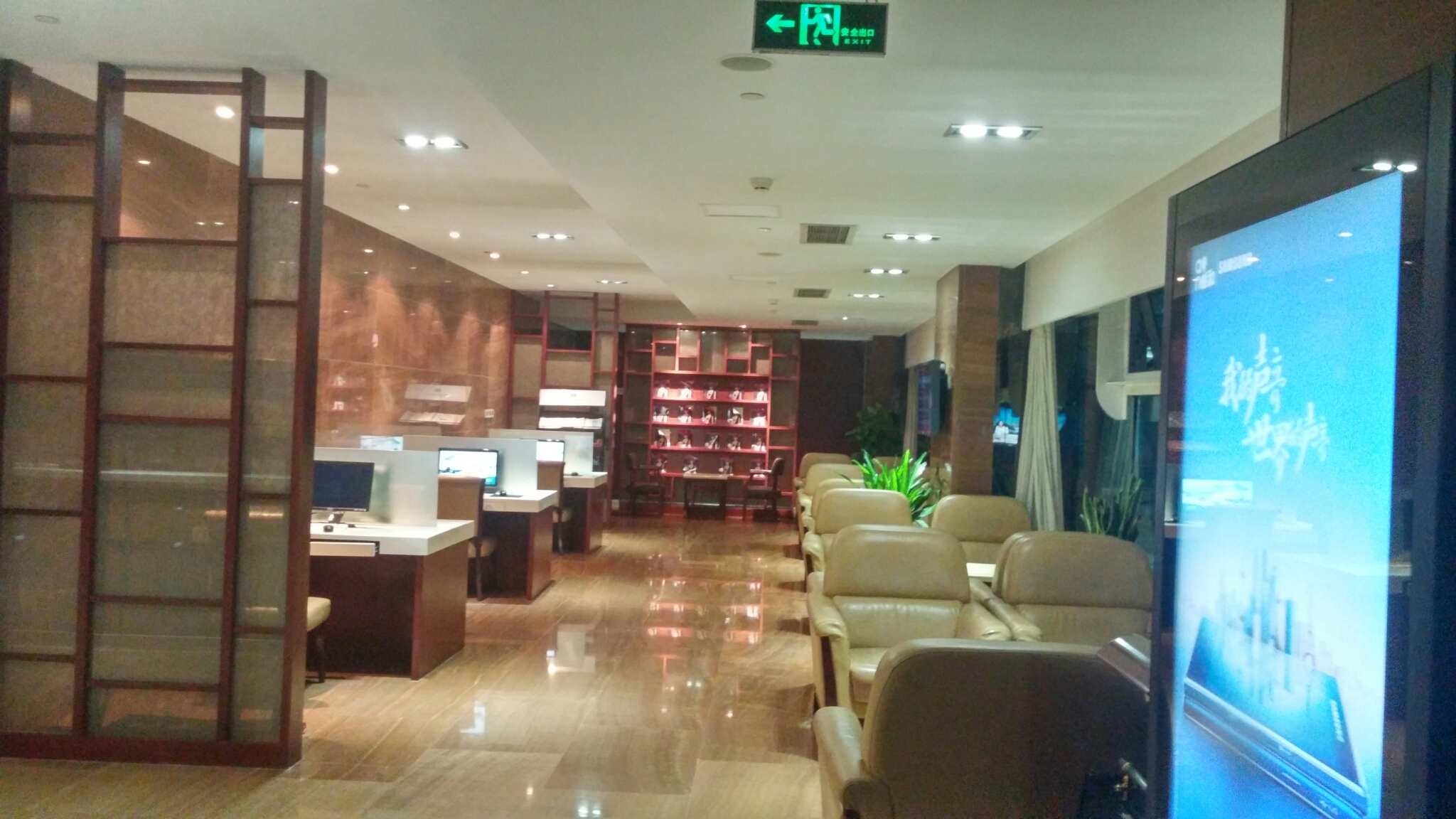 However, it was still a comfortable place to spend a few hours and better than the hustle of the main terminal.

There were good views of the apron from here. 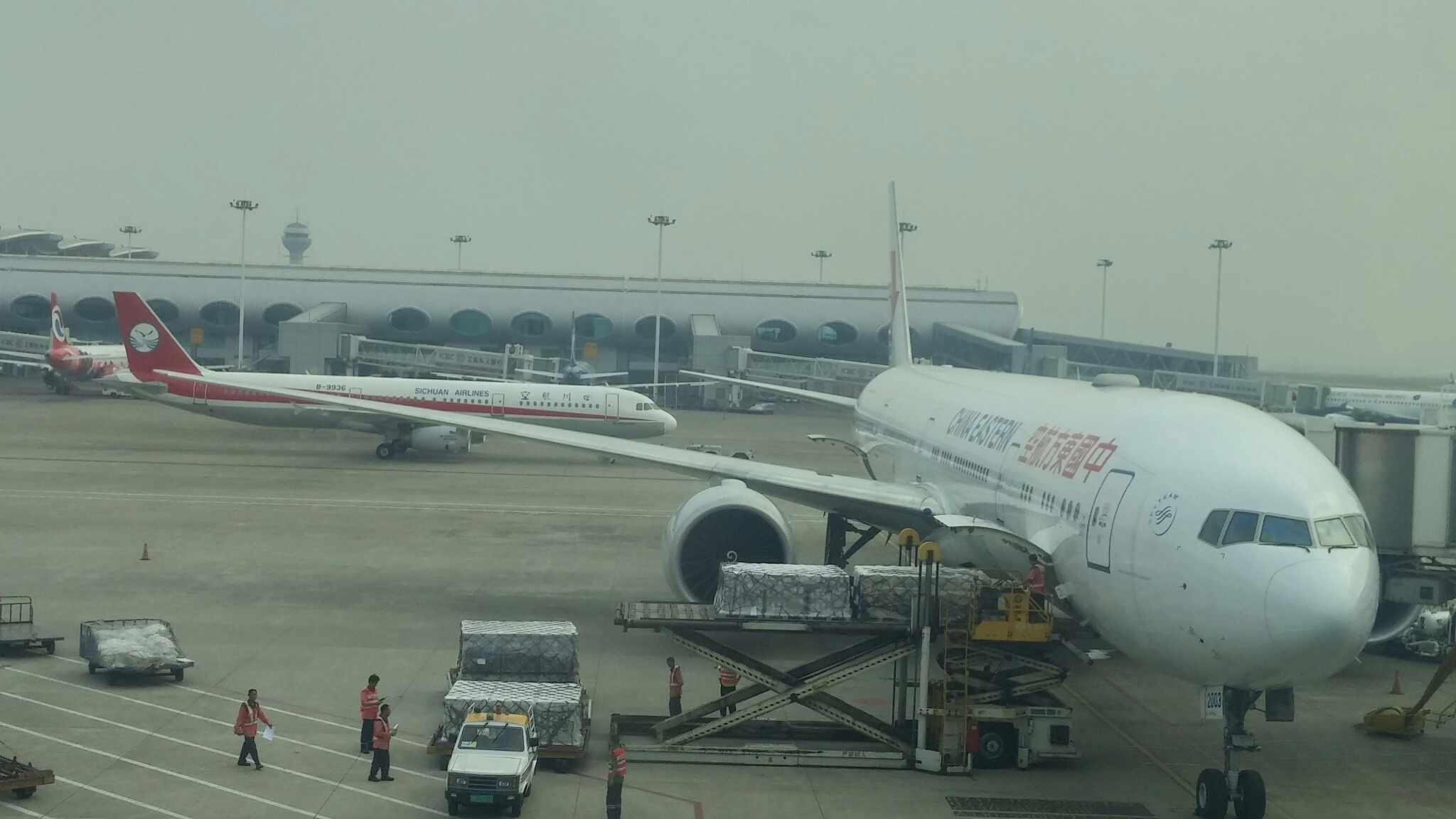 I made my way to the gate to find the flight to Wuhan was leaving an hour late. Delays are common in China. (I'm not sure what an "Irregular Flight" is!) 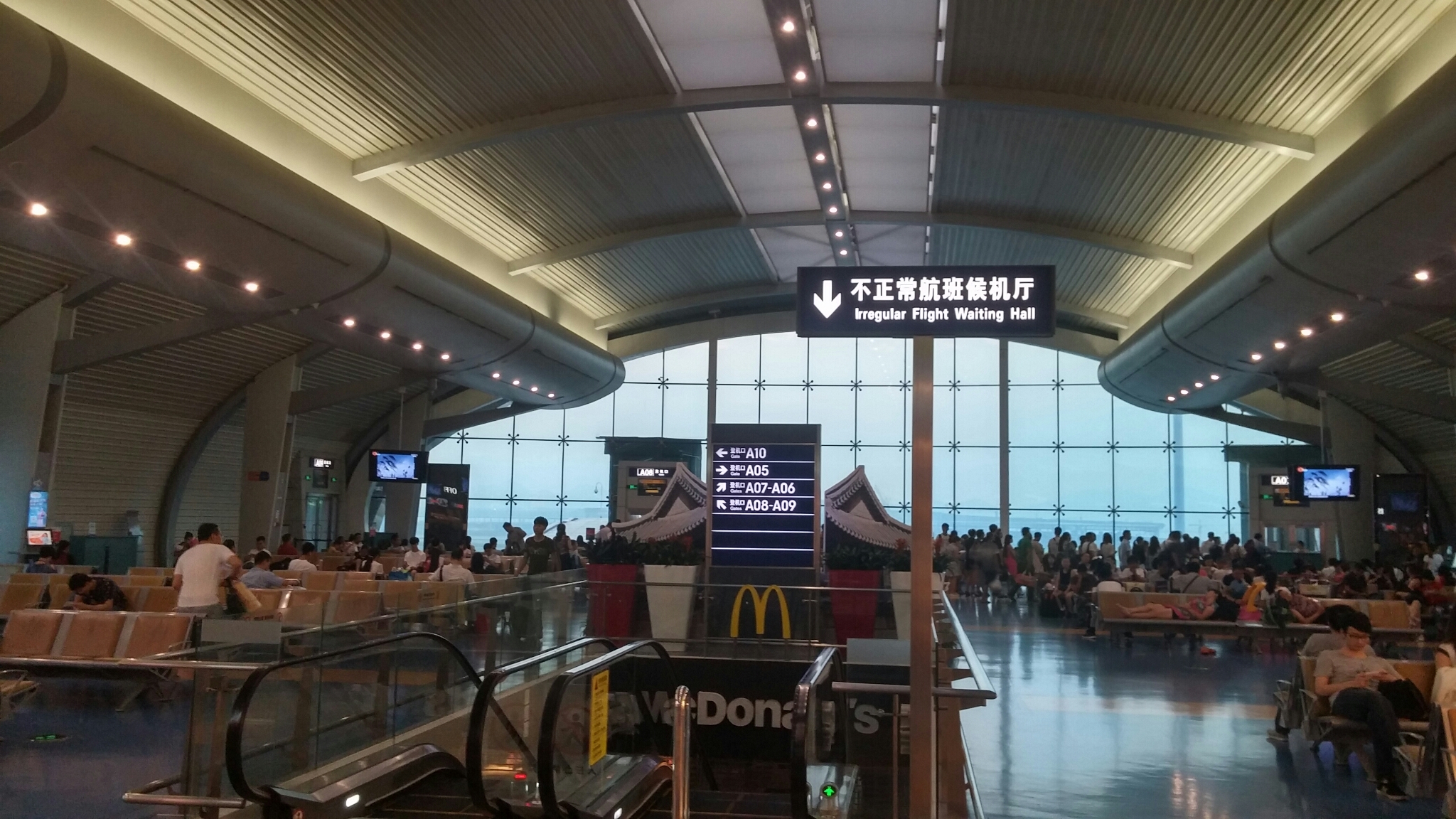 An A319 was taking us to Wuhan this morning.
I found out that the flight touched down in a place called Shenongjia. (No, I've never heard of it either). It is apparently a government forestry plantation area in Hubei province. It has about 3 flights a week on MU and 3U to Wuhan and Chongqing.

We finally took off from CKG an hour late. 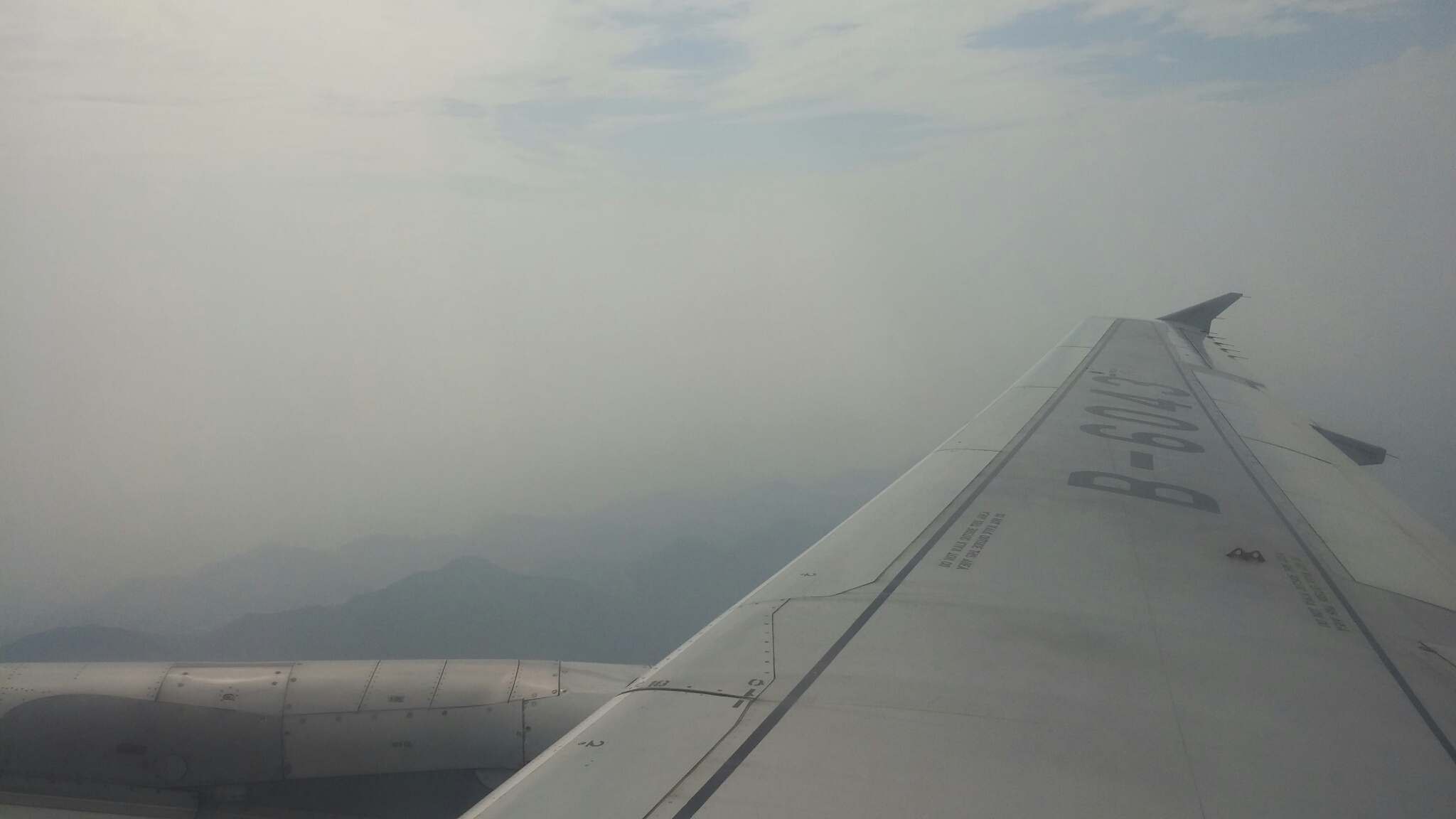 And were served a bottle of water. There was no one in the row opposite so I moved over and had 3 seats to myself. 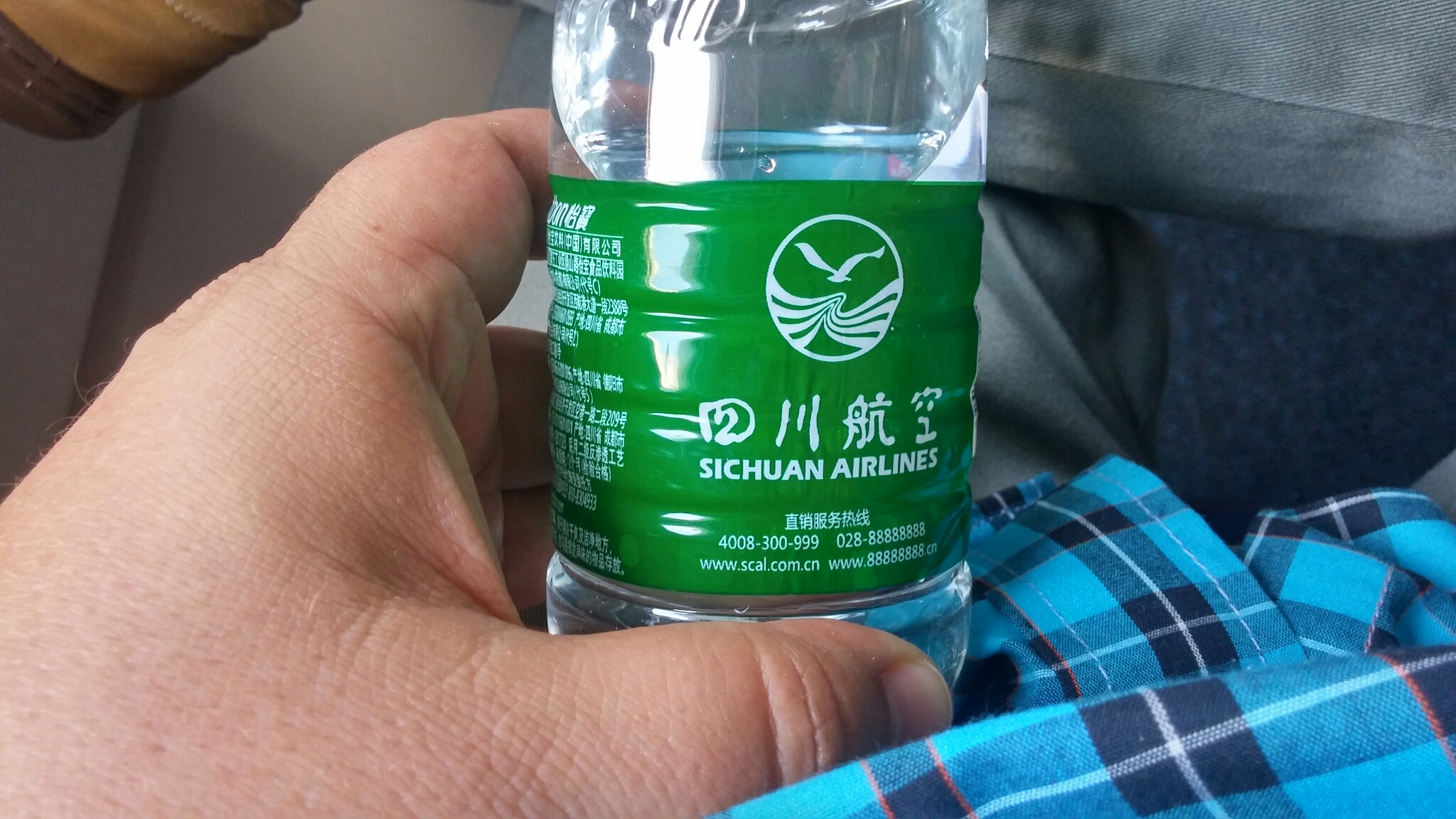 And then landed in Shenongjia. We were only on the ground 15 minutes, but made to get off the aircraft, get a transit card and reboard again. A bit of a pain really. 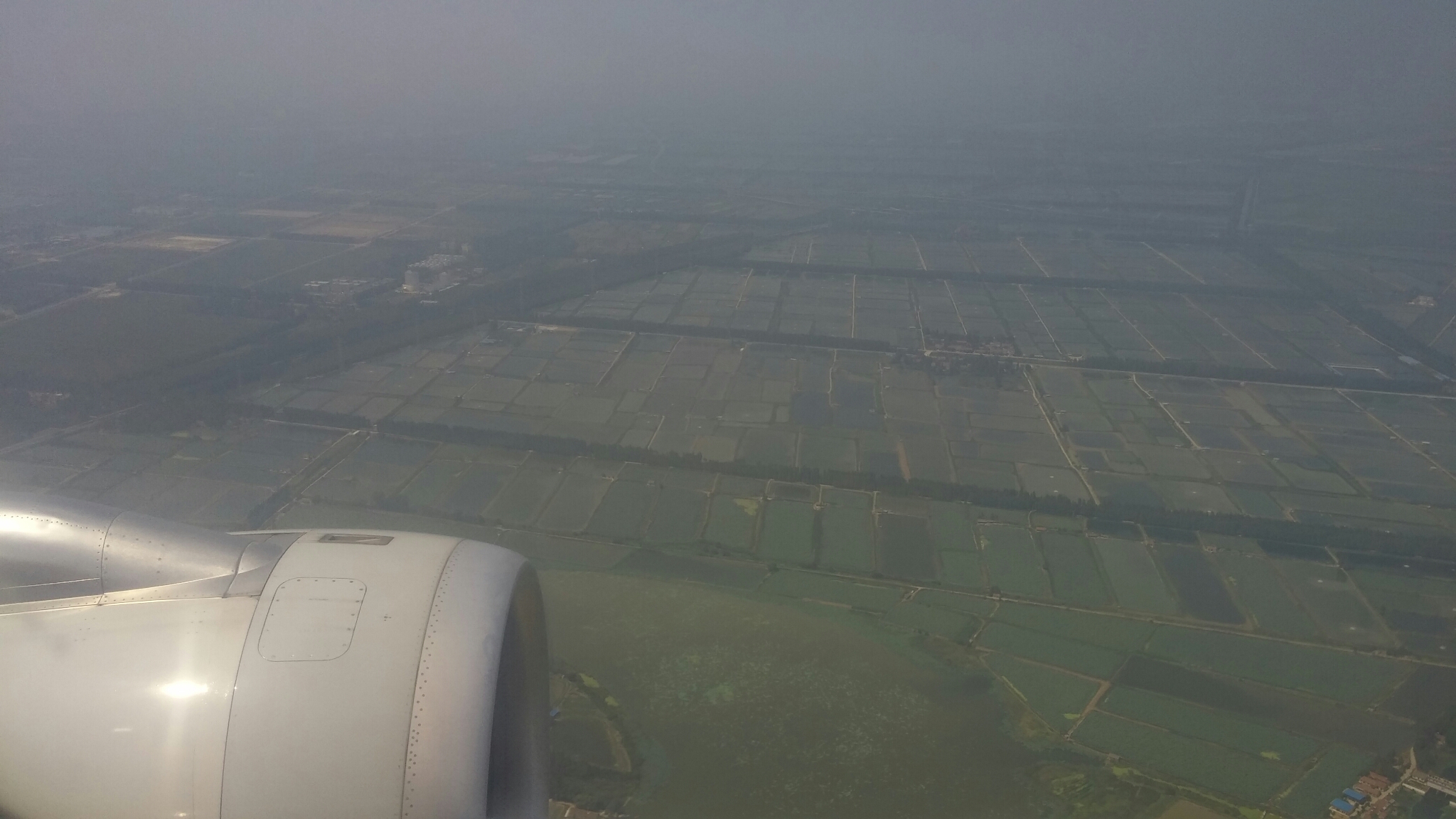 There was an MU A319 in town as well. (Taken through dirty window). 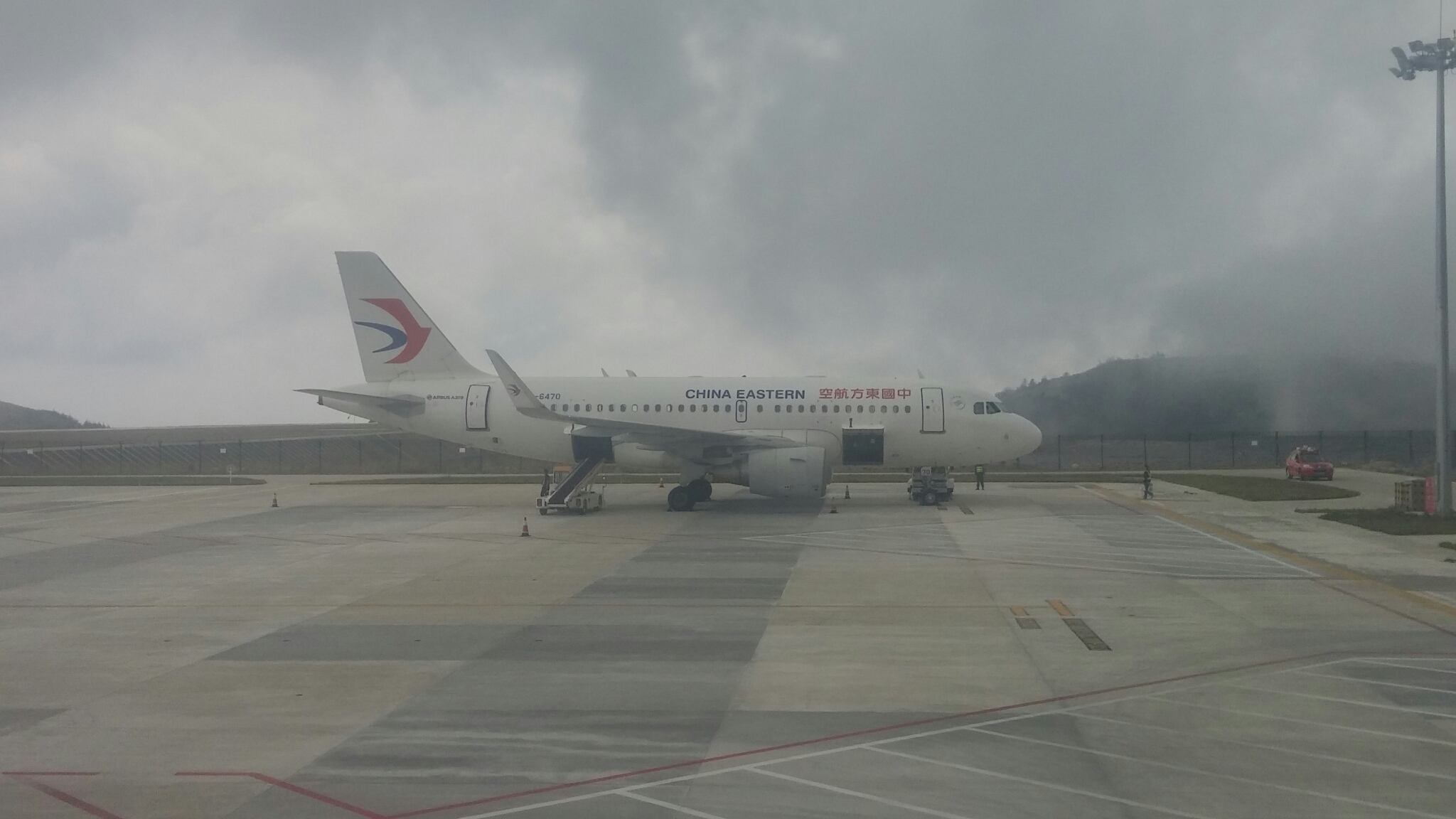 Again, we took off about an hour late and then, another bottle of water later, arrived in Wuhan - a much bigger airport of course! 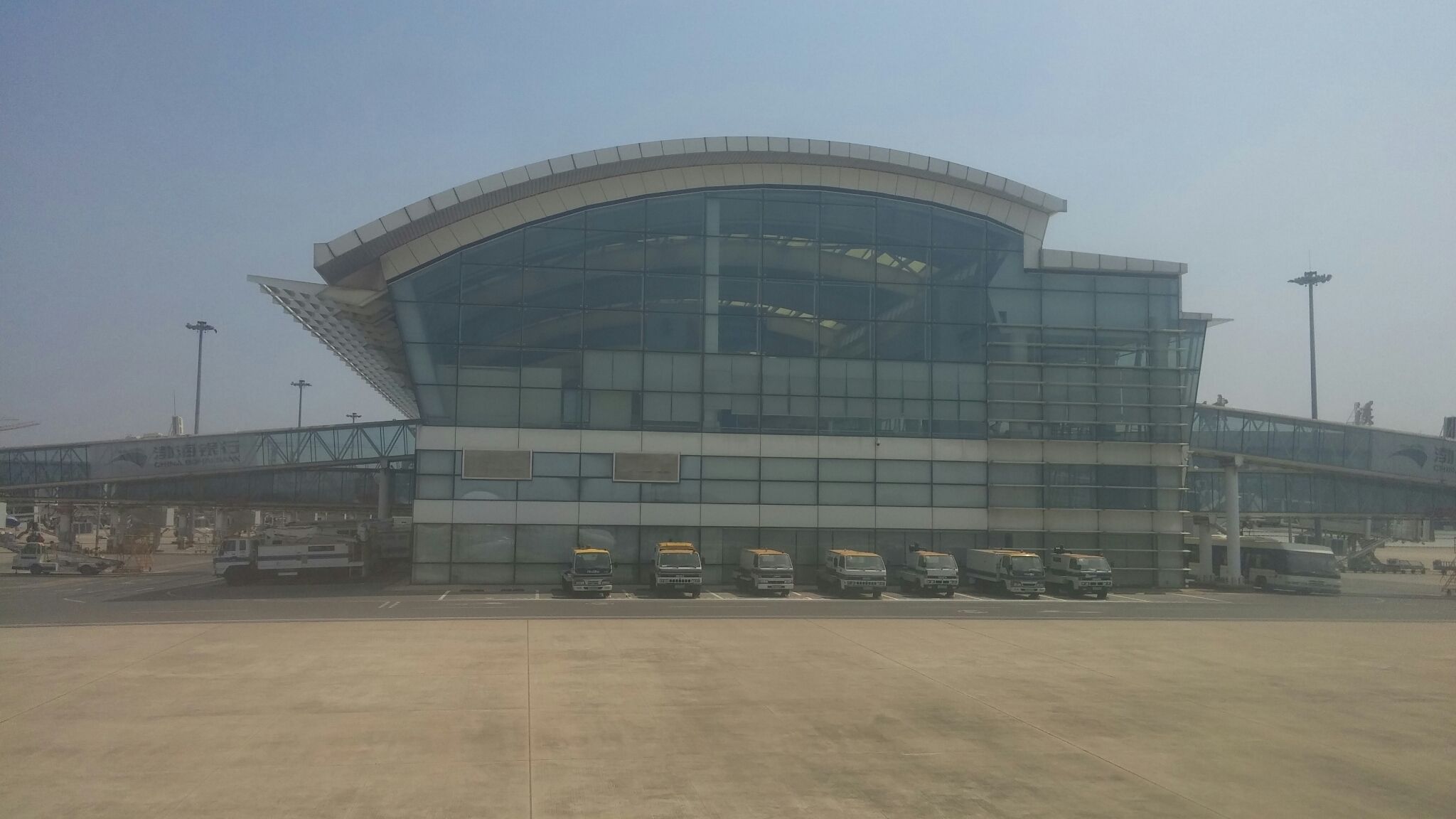 I got my bag quickly and jumped in a cab to the hotel where I had a reasonable view out of the window. 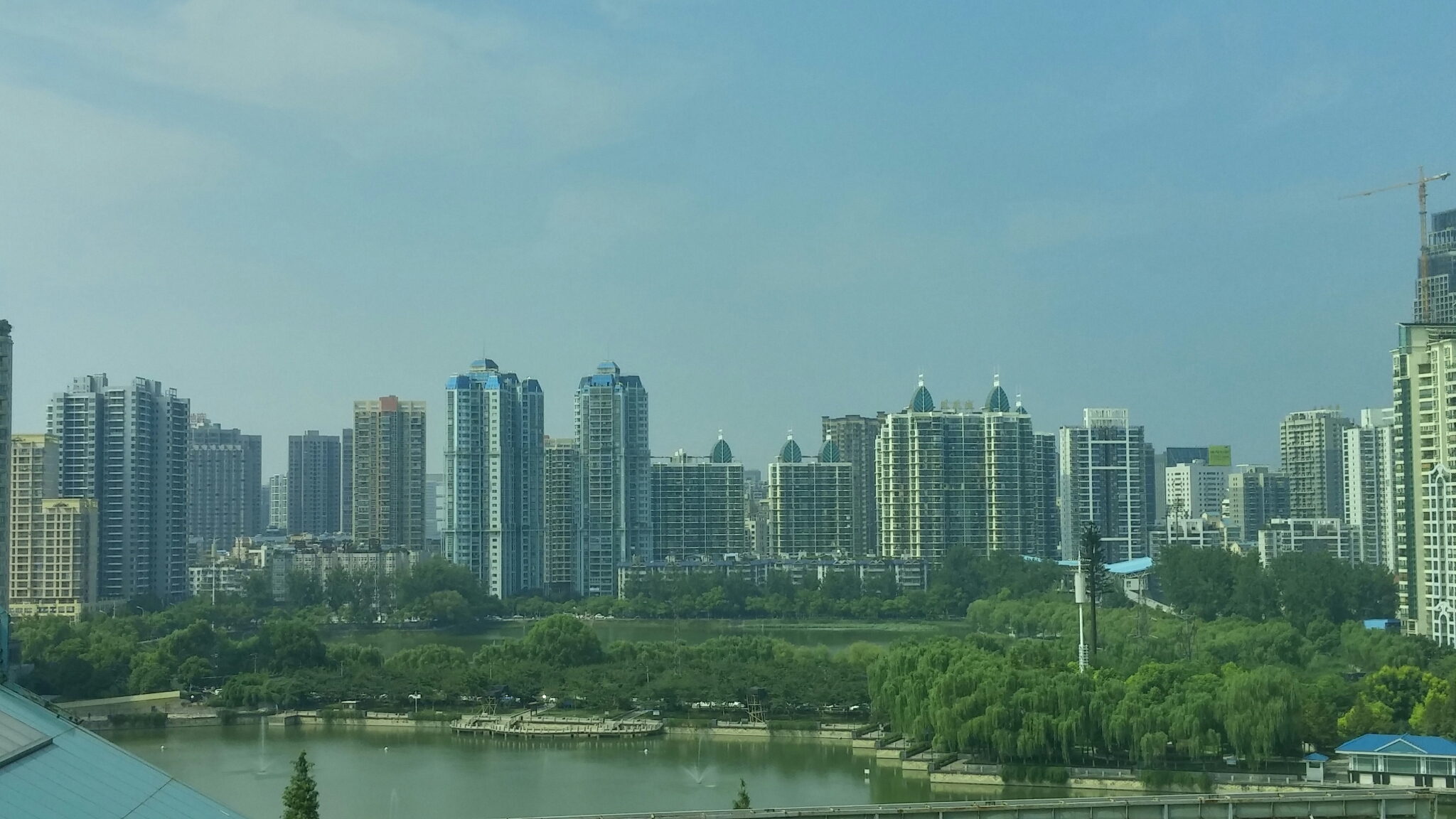 I then took the bullet train to Shanghai. Its 829km and took about 5 hours. The train I was on (category D) isn't the fastest category, but mine still got up to 249 km/h at certain points. Definitely a novel experience for someone coming from Australia! 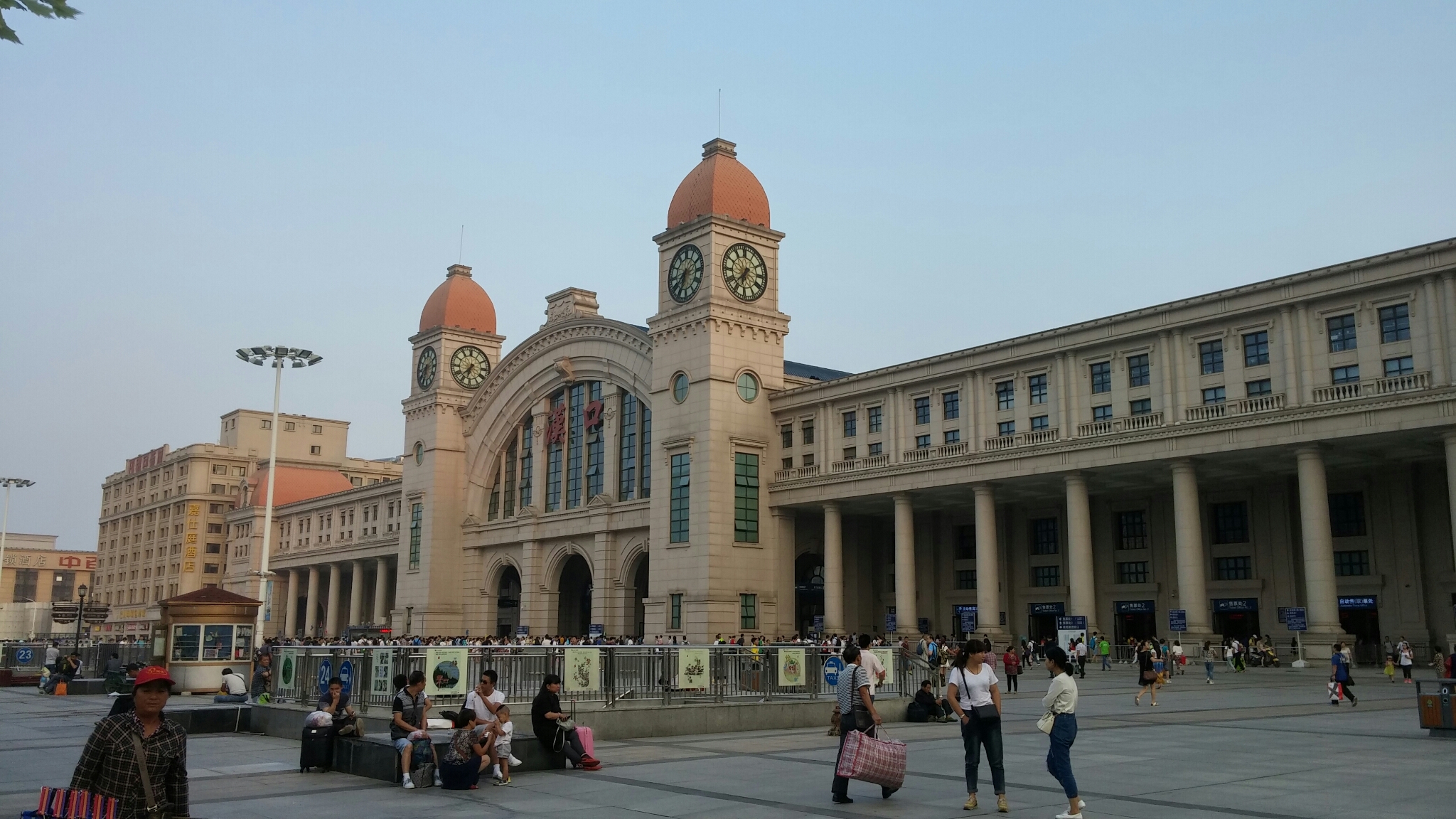 It was a holiday weekend, so things were very busy! 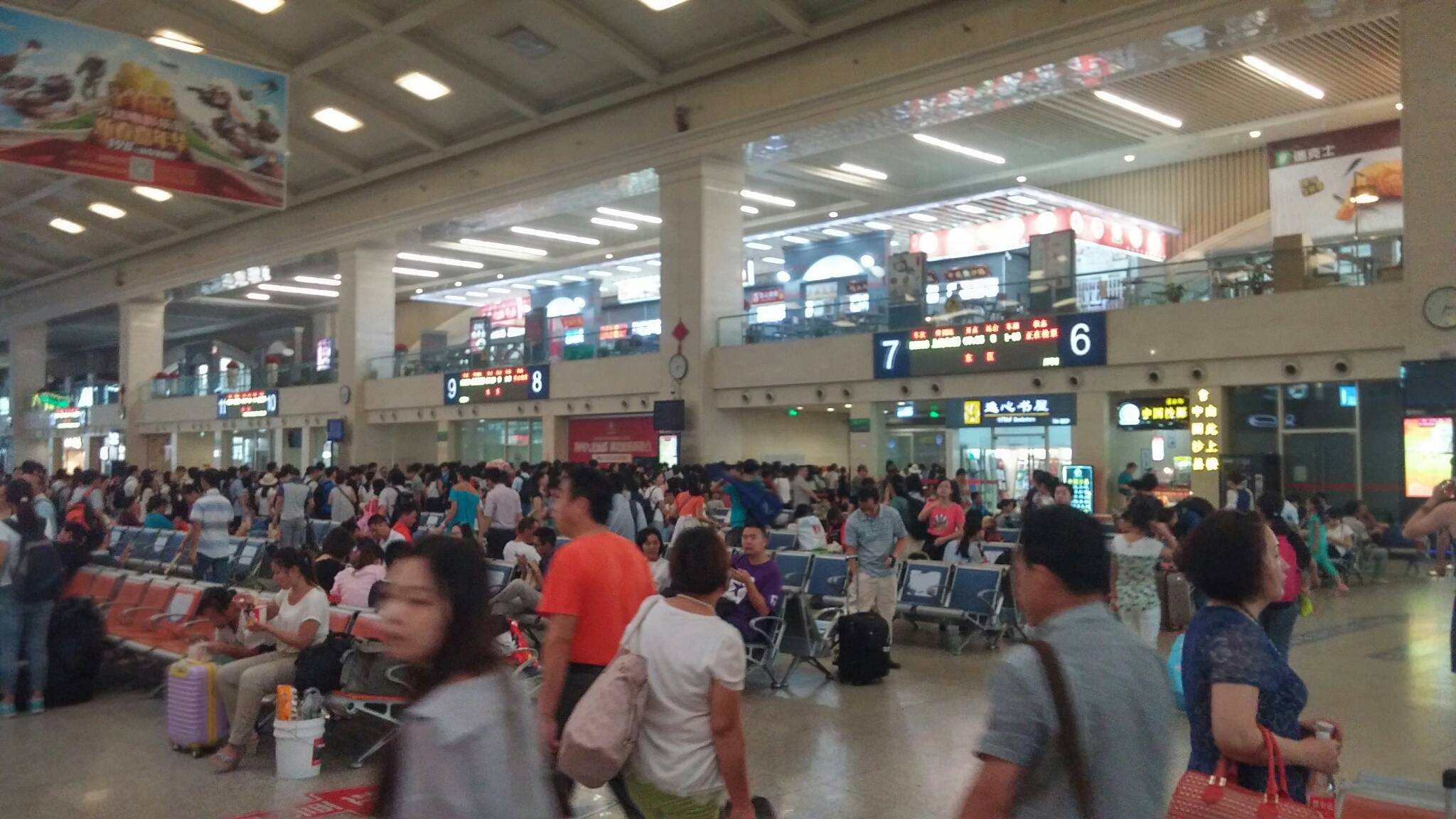 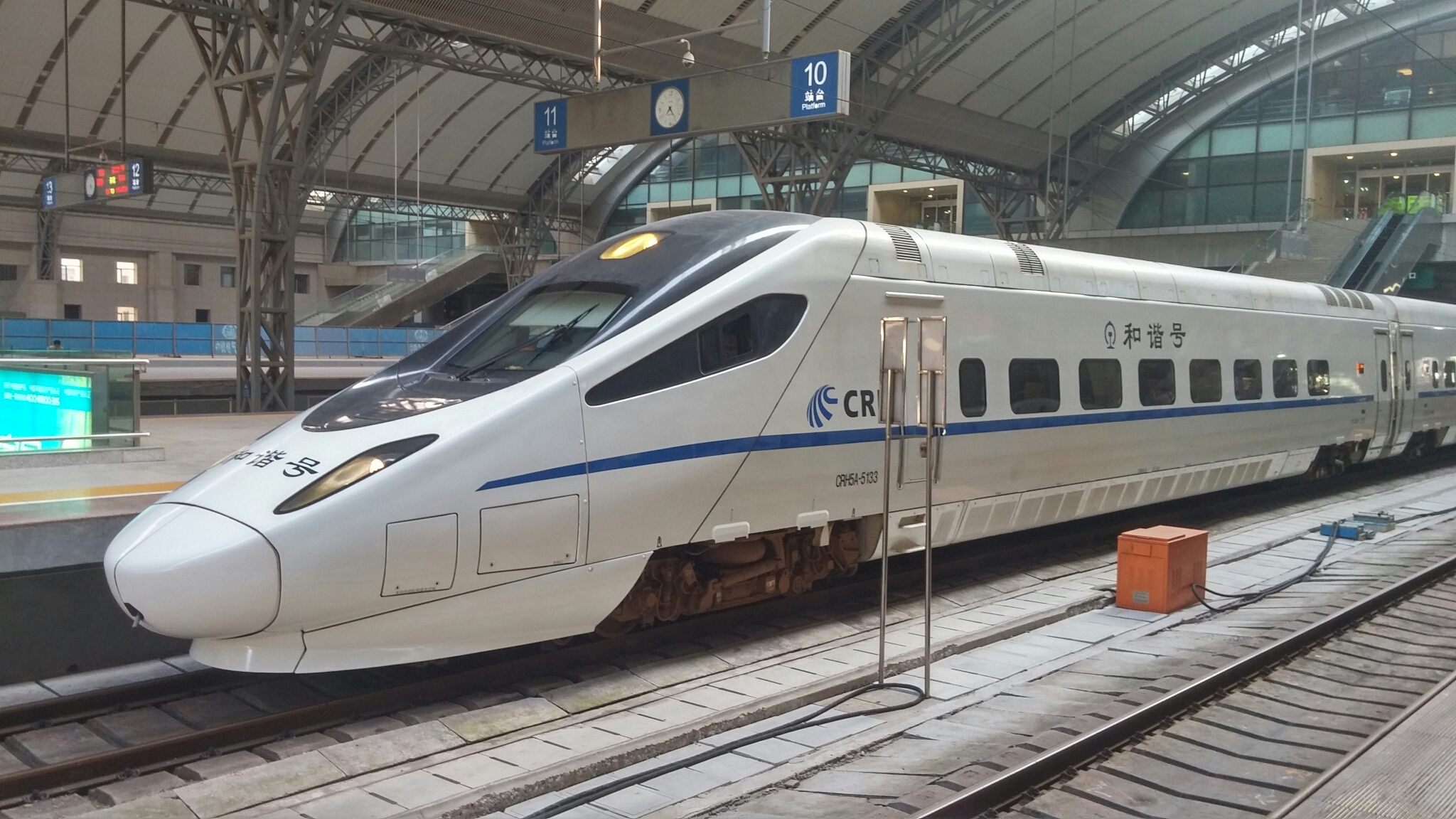 First class on the train was very comfortable - and about $66 AUD for the journey. 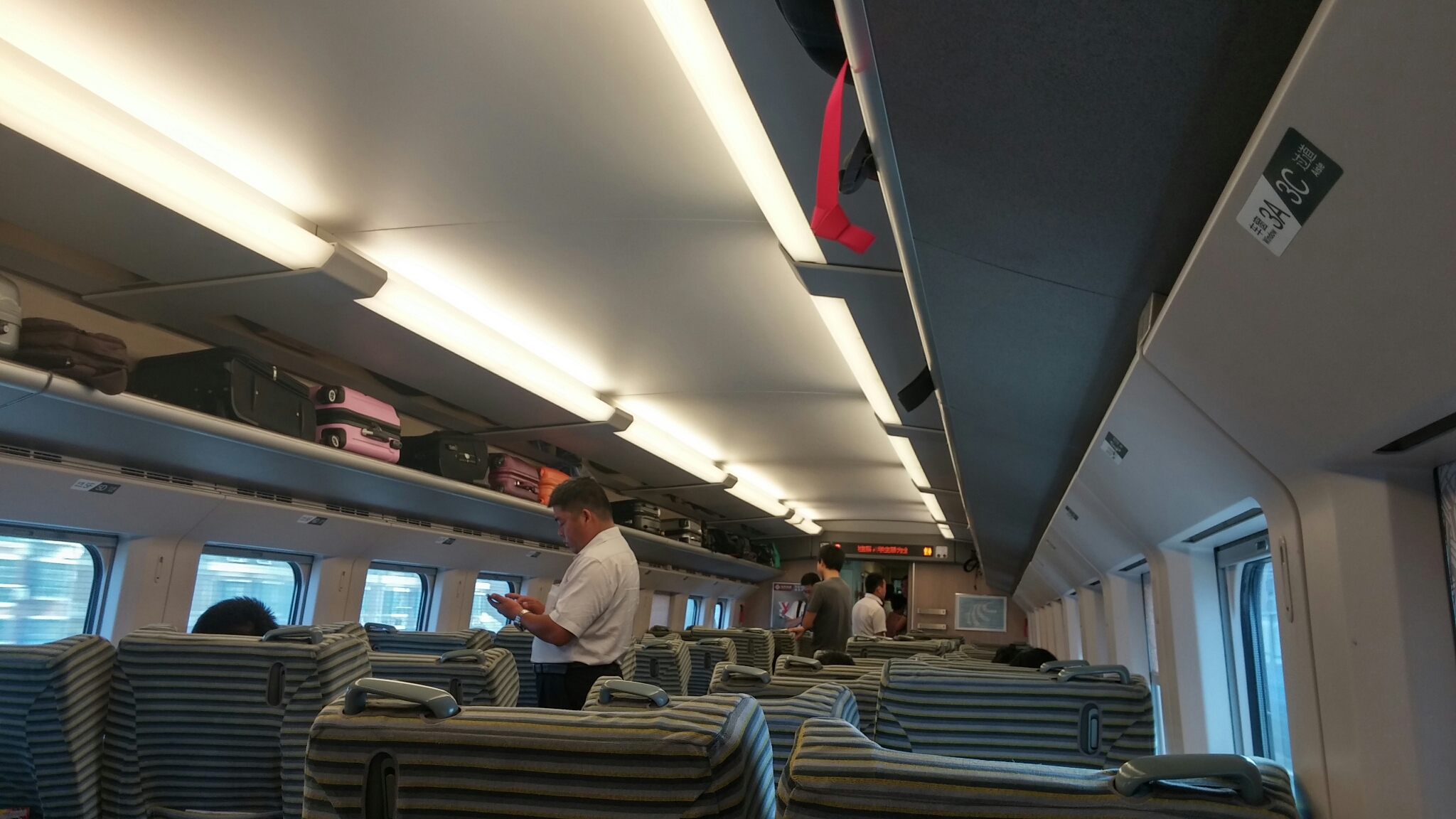 The meal wasn't great - and quite spicy - but it filled a gap until I got to Shanghai. 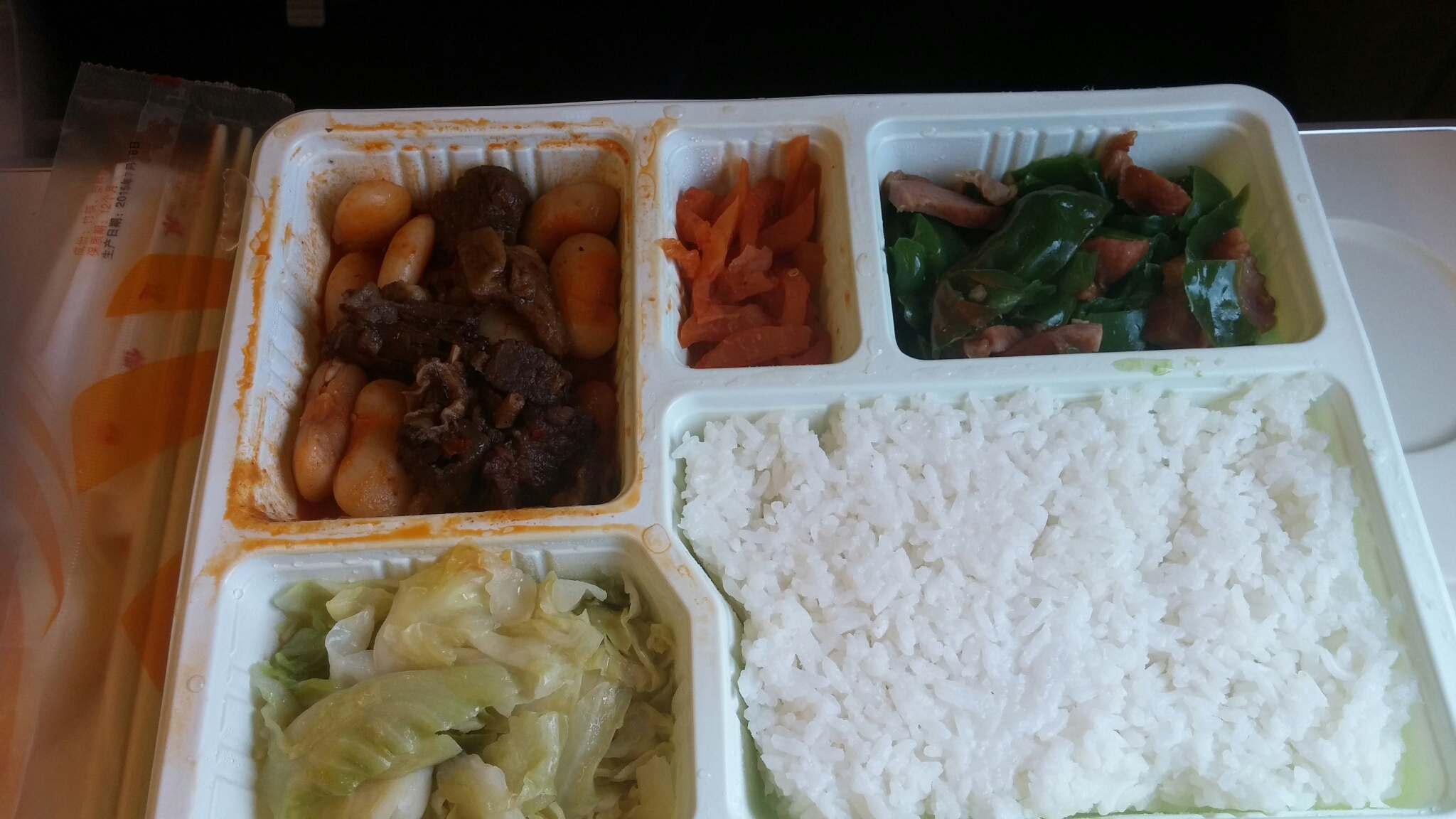 After some time in Shanghai it was time to fly home to Sydney on China Eastern.
I got a taxi to the airport and checked-in then went through security. I got held up a bit, so there wasn't much time
left. We were at a remote gate tonight (217). On the way I passed the smoking room. I know Shanghai is
prone to a bit of haze but this is ridiculous! 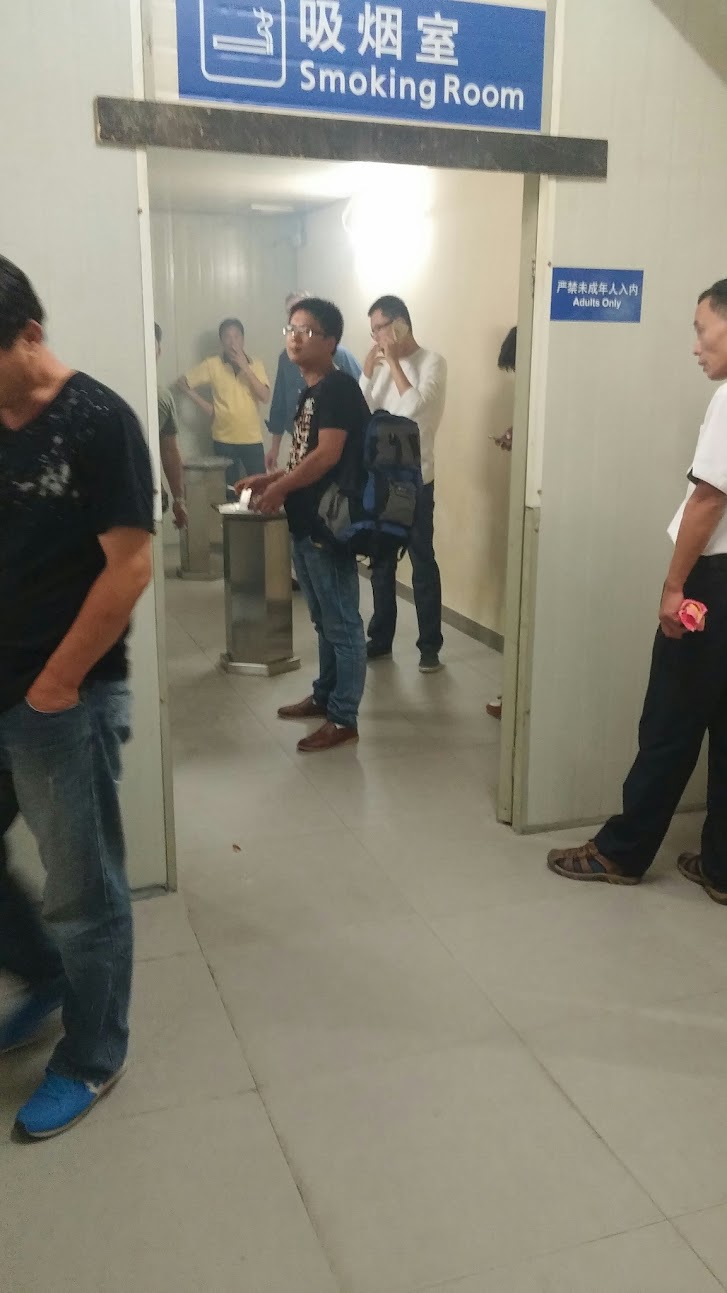 We boarded on time and had a long drive around the airport to the remote gate.
Gee the A380 looks big when you're underneath it! I wonder how AF are going filling the A380 between CDG and PVG? 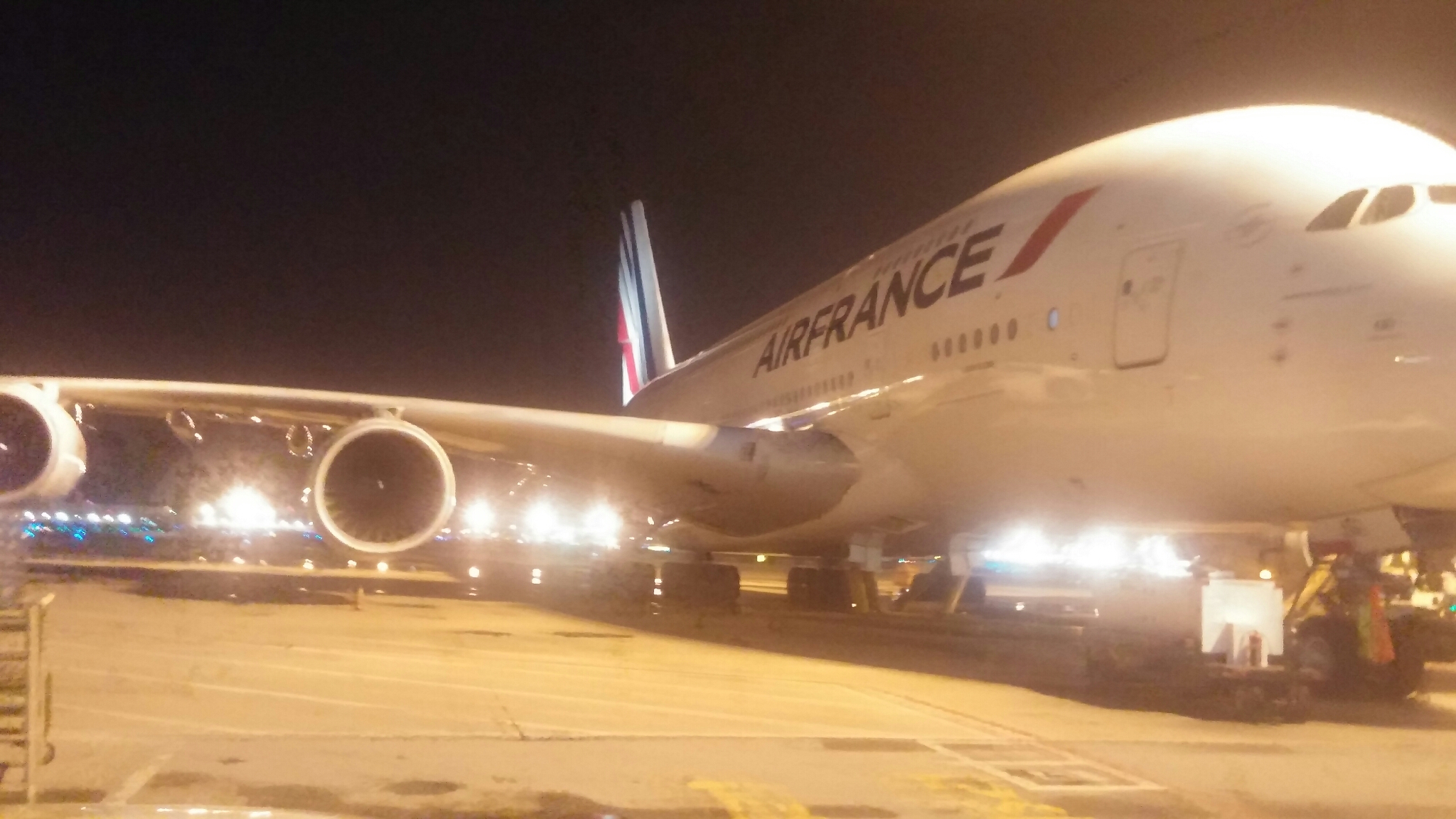 I managed to get some great shots of our A330 from the tarmac. Lots of people were getting photos. I was a bit hesitant, but the security guards around the aircraft didn't seem to care a bit. What a beautiful bird close up! It turns out that this version was only about 4 months old. 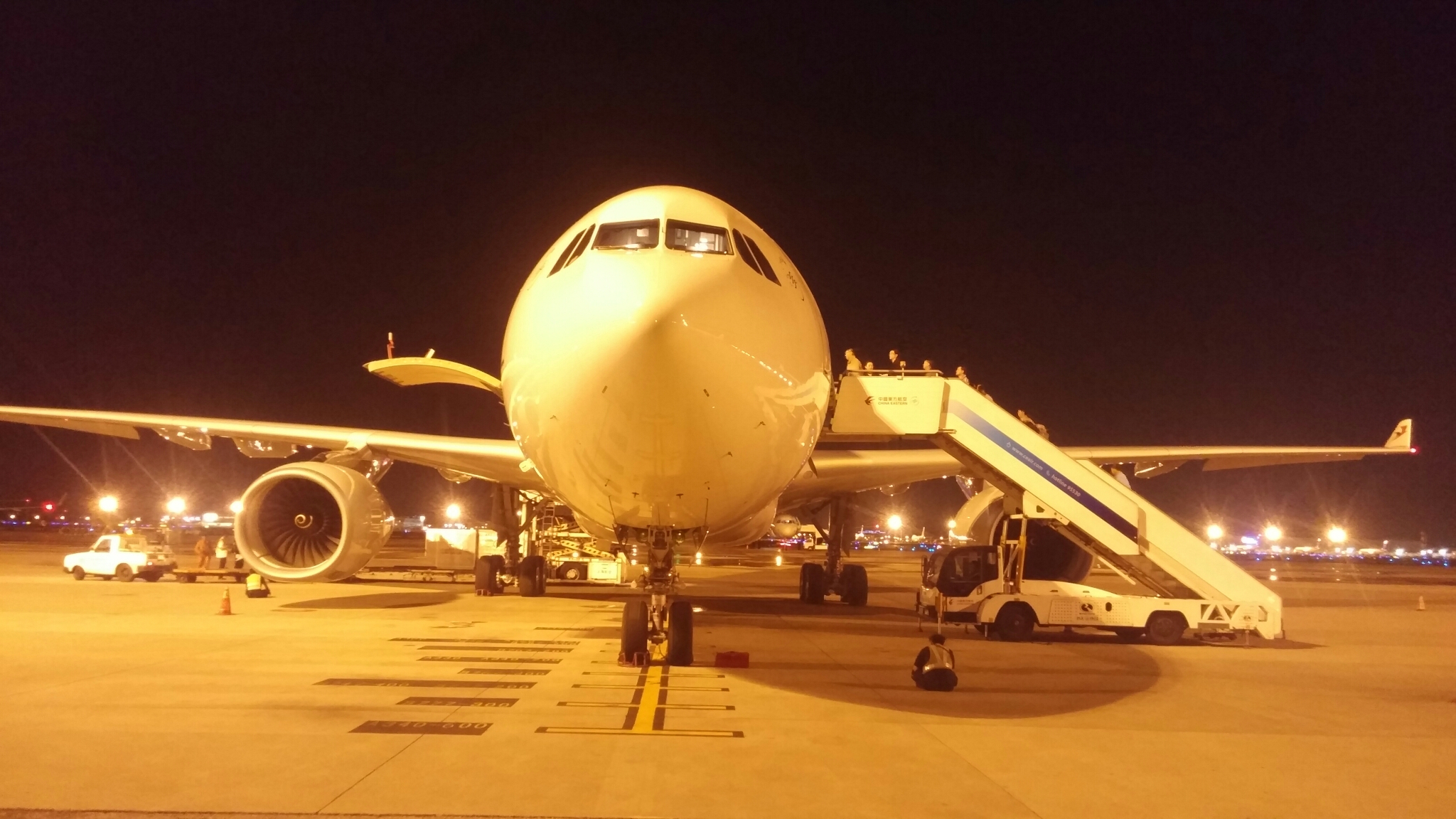 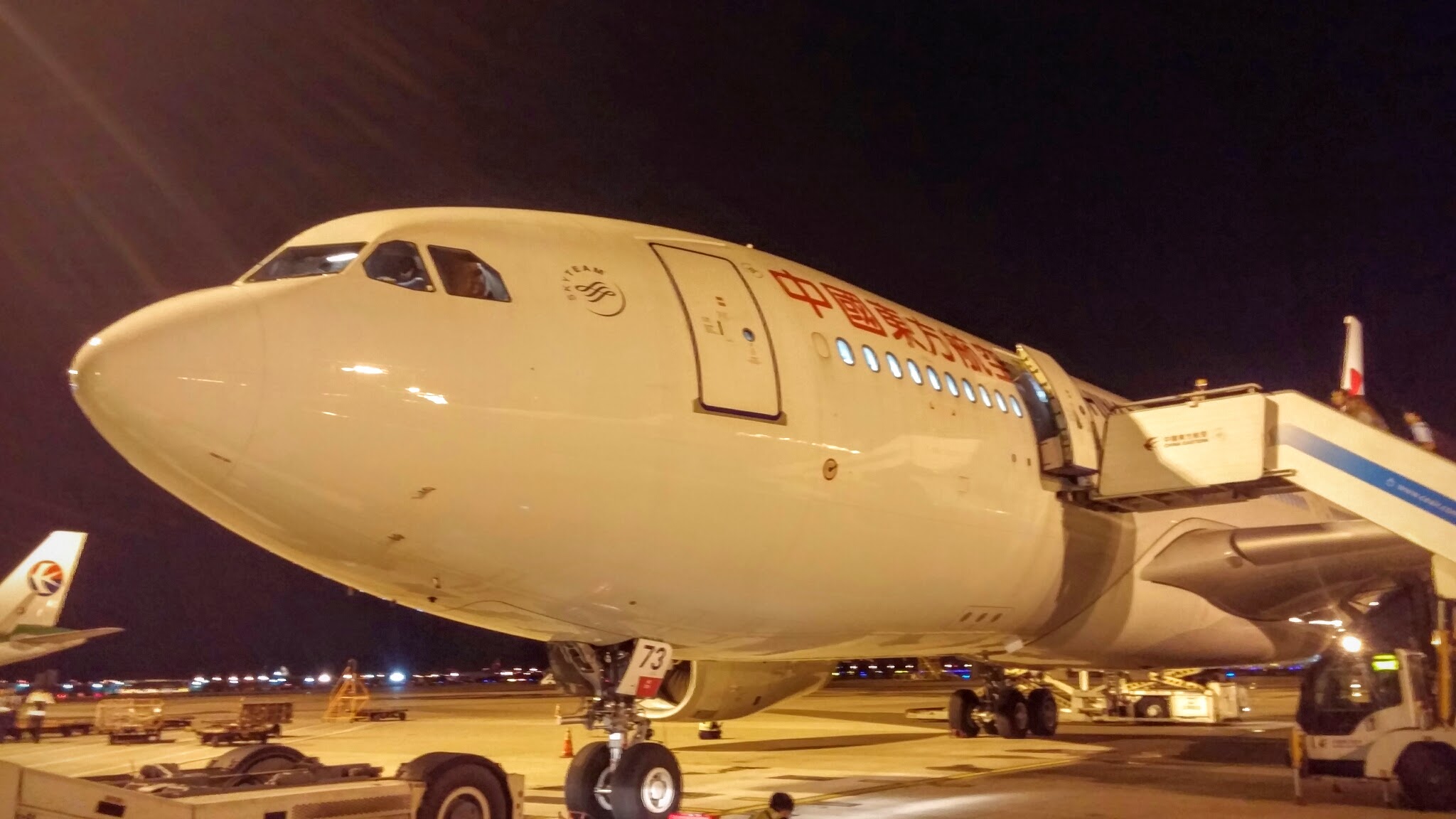 A couple of big RR engines to get me home: 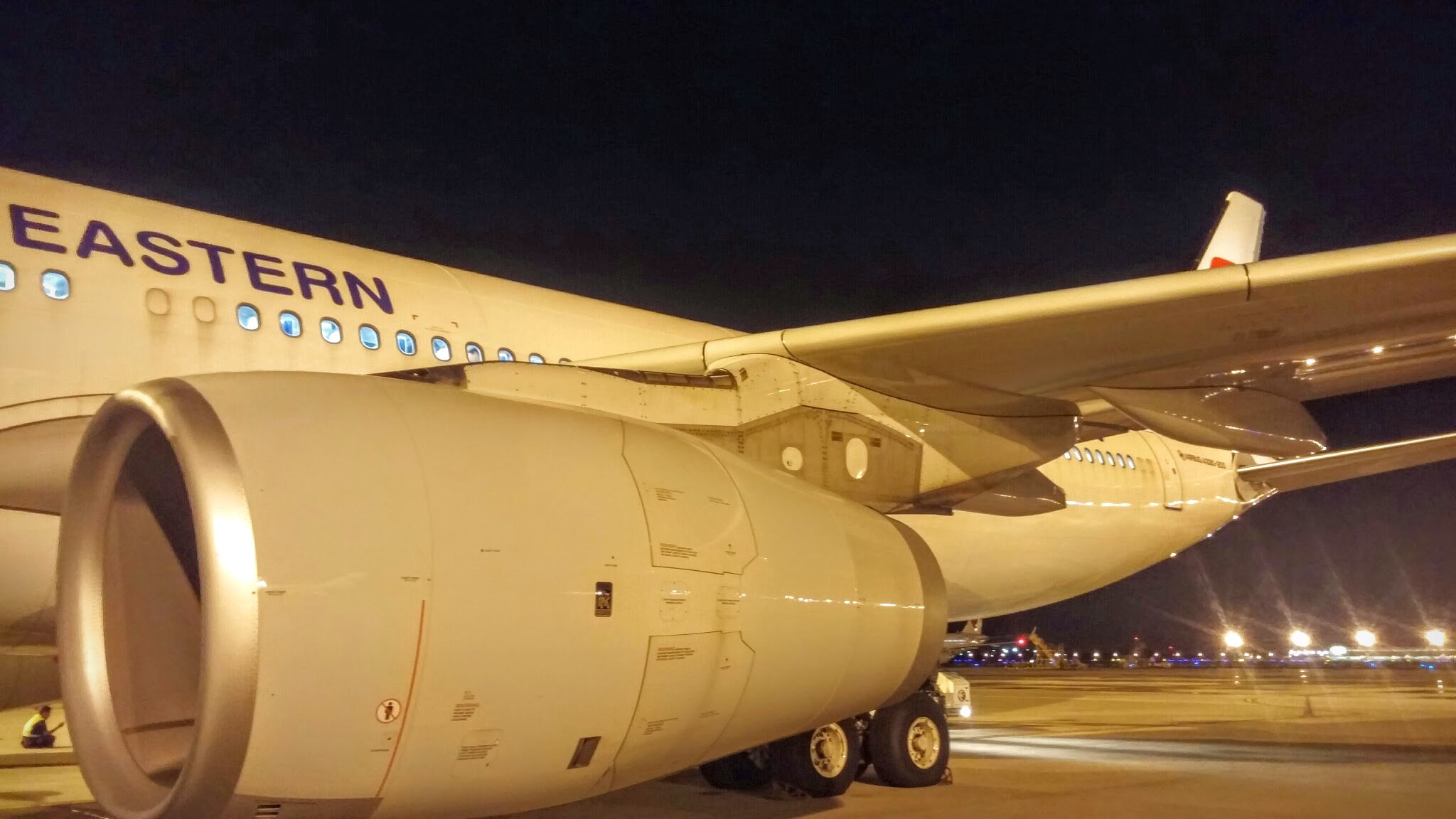 I made sure I was last up the stairs so I could enjoy the view of the aircraft - and minimise my time sitting down - and then made my way up the stairs. I had an aisle seat, and the load was about 80% and again I lucked out with a spare seat next to me in the centre section.

The crew were welcoming. They were a very young crew - most except the purser - close to about 25 years old.
I must say that I really like the new MU uniforms. They look very chic and smart! Again, we had an all-female crew. Their hair and make-up were immaculate and they looked very well turned-out.

This was a very new plane and it certainly looked it inside.

There were personal TV's, USB sockets, games, audio - I was really impressed with the comfort of the seat and the entertainment system. Quite a good selection of western movies and TV shows. More than enough for a 10 hour flight, that's for sure!

I managed to get a shot of the J class seat on the way through. J class looked full for the most part. 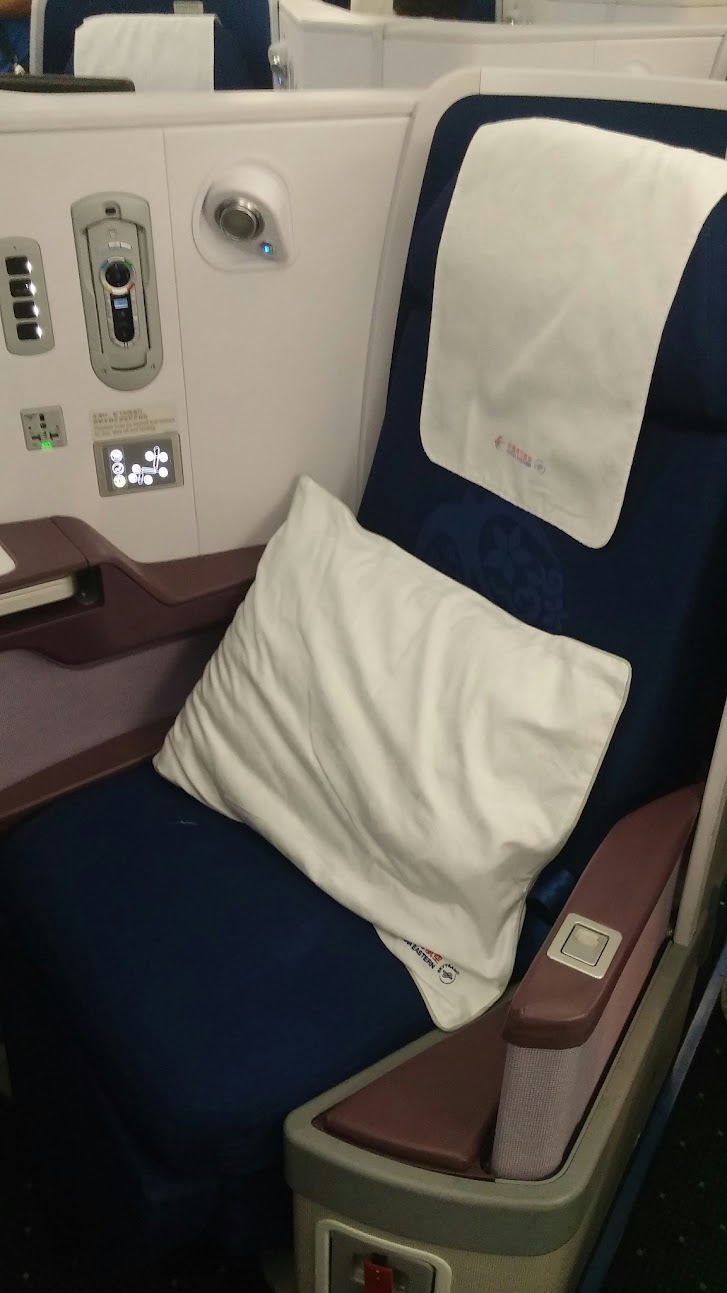 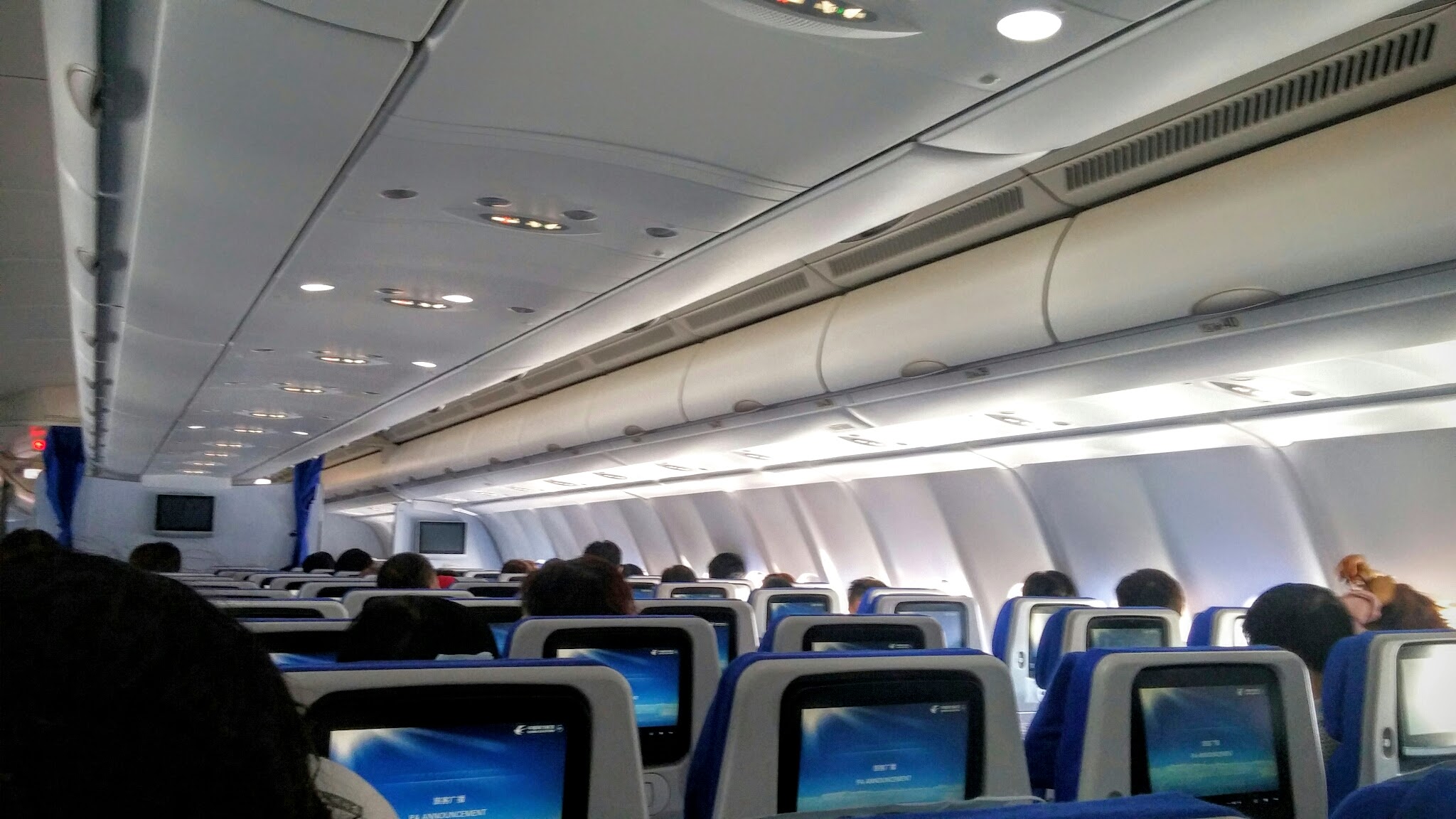 The system was touch-screen and worked very well: 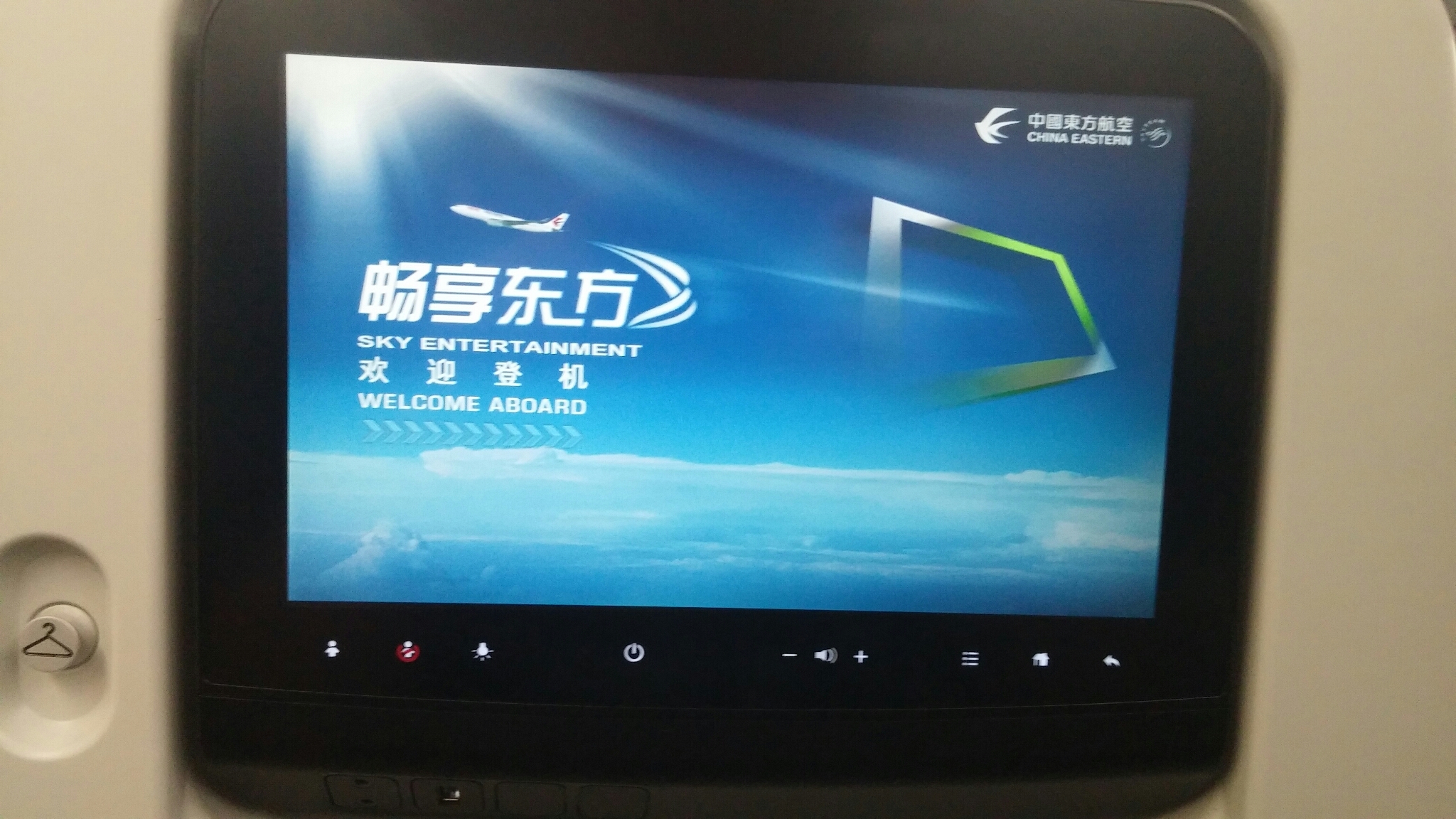 The moving map was really detailed and one of the best I've seen on any airline. 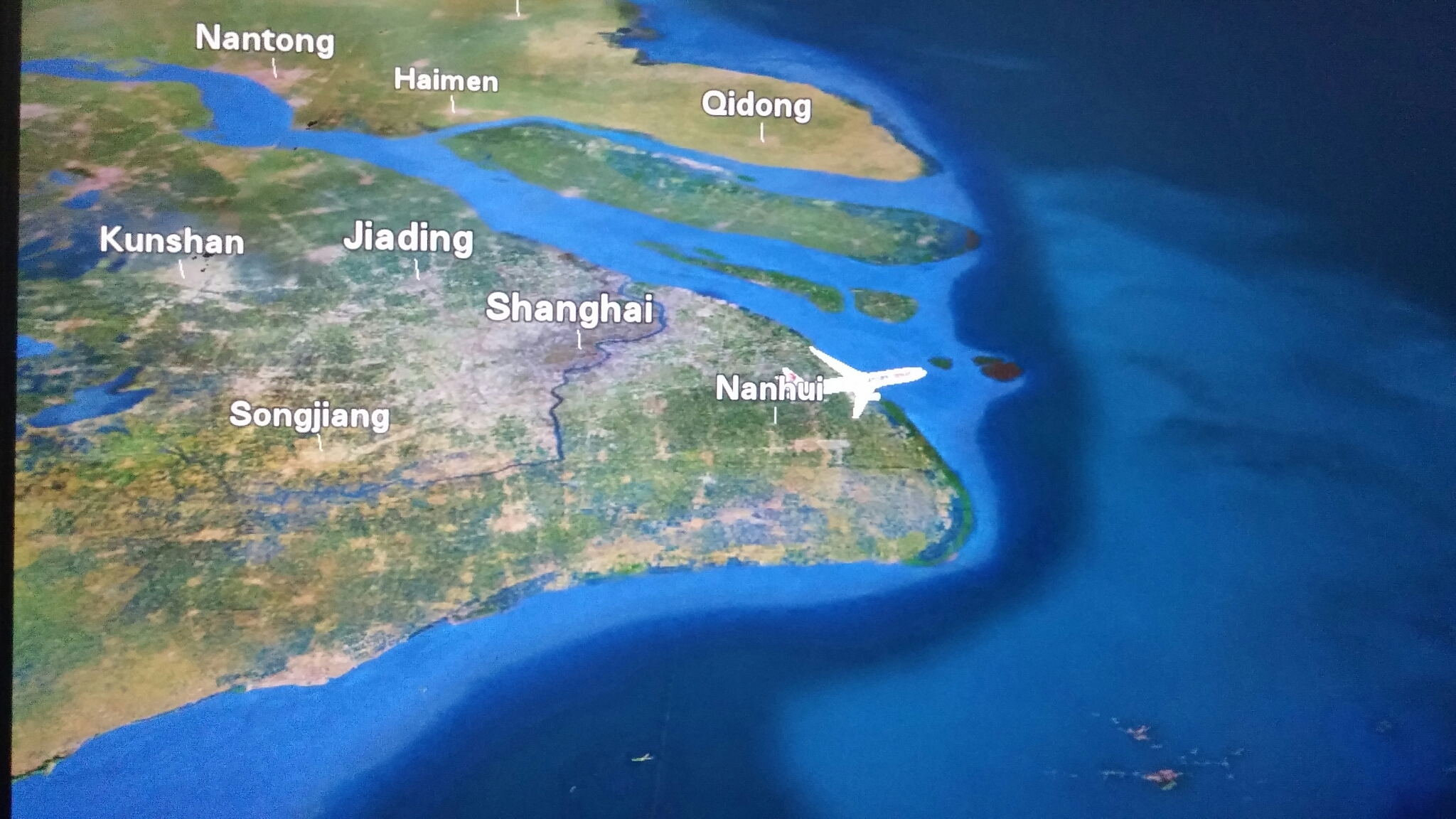 I didn't get a lot of pics on the flight as it was a night flight, lights were turned out between the services and I slept a few hours too.

However, here is a shot of dinner:

And with the foil removed... it was a sort of crumbed pork with pasta in a tomato sauce and actually pretty tasty. There was an Asian fish option as well.

I slept and then breakfast was served about 2 hours out of Sydney. Quite nice again!

Again, no spirits available. Beer, wine, soft drinks. However, unlike Sichuan Airlines they did have coffee as well as tea.

Now... did you look closely? What did you notice about the meals served? Did you see it?
It dawned on my during breakfast that they got the trays mixed up for the two services! Haha.
The dinner tray has yogurt on it and the breakfast try has dessert/cake on it. Quite amusing! I wonder why no one noticed? It didn't worry me, but I thought it was slightly amusing.

Before landing there was an inflight tai-chi video played which was quite relaxing. A few of the Chinese on-board seemed to be following the video guide.

We had an approach into Sydney where we overflew the city, turned back and landed to the north on runway 34L.

Arrival at the gate was bang-on time.

I was really impressed by China Eastern compared to last time I flew them about 3 years ago. Since joining Skyteam they really seem to have lifted their game. Having newer aircraft helps - before they flew aircraft to Australia with no PTV system. Now it's guaranteed. The crew were professional, friendly and had a decent level of English and they displayed a good attitude. It's great to see China Eastern heading in the right direction. I'd fly them again for sure!

I hope you enjoyed reading.

Having a problem with the pictures on both postings.
I am against any terrorist acts committed under the name of Islam
Top

Another great report. Nice that you got to log the stopover airport of Shenongjia - exotic! Also I traveled by train in China last year as well, it was also quite busy but an exciting experience nonetheless!

Was there a door??

I believe AA has the same system on their A321S. I agree, it's really easy to use and I loved the moving map as well.

Actually, I don't think there was a door. However, I didn't hang around long enough to find out!

Agree with you on the livery. It really is quite dull. They could have done a lot more with it.
Top


Don't you hate that! Even worse if you have to walk the length of the terminal and back before you can reboard.

Good to see that China Eastern has improved, especially for their international partners.
I like artificial banana essence!
Top

Hmm, I can't see any pictures