It has been a few years since I write flight/trip reports.
Flying has become a normal routine to me, as I travel between Ottawa and Toronto by plane rather frequently (Nowhere near other a.neters of course). Although I still take pictures and get excited when I step on a plane, I have gradually stopped writing reports like I used to. I seemingly forgot the excitement of sharing the joy and experience of flying with everyone who's interested, I guess this will be a brand new start of my flight report writing "career"?

Let's get back to topic. It was supposed to be a routine flight of mine, from Toronto to Ottawa (side note: funny enough, this is actually my first time flying off to Ottawa from YOW-YTZ many times but usually flying back to Ottawa from blog
i copy and pasted the html code which doesn't work very well here. **

Winter holiday season at Pearson... No matter what status you are, if got a checked luggage, not even SE members can skip the queue. Unfortunate for me, I have to check my carry-on luggage due to a bottle of wine that was gifted to me, but the queue is definitely faster than Economy, it took me about 5-10 mins. 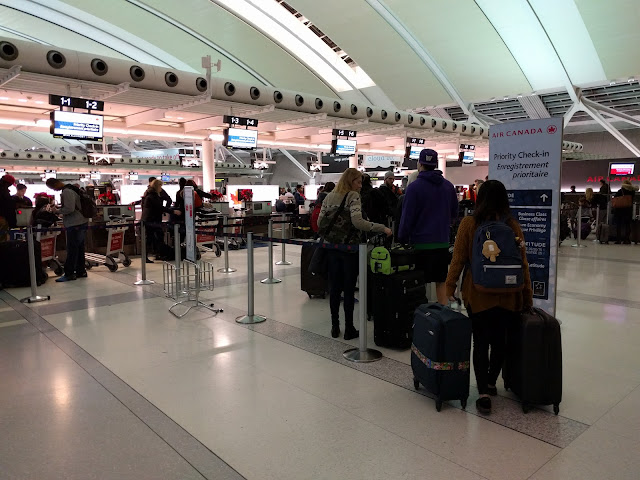 Security was another nightmare, it would probably take me at least an hour to get through.
Thank goodness for the little extra I paid for business class. Praise to priority security clearance...
I made myself to the lounge right after security clearance and got myself a complementary breakfast buffet, nothing special, really, food is fair, pretty much everything you would expect in a lounge in North America, except alcohol is not served until 11:00am and screaming kids running around the aisles.... Well, it's winter holiday season. 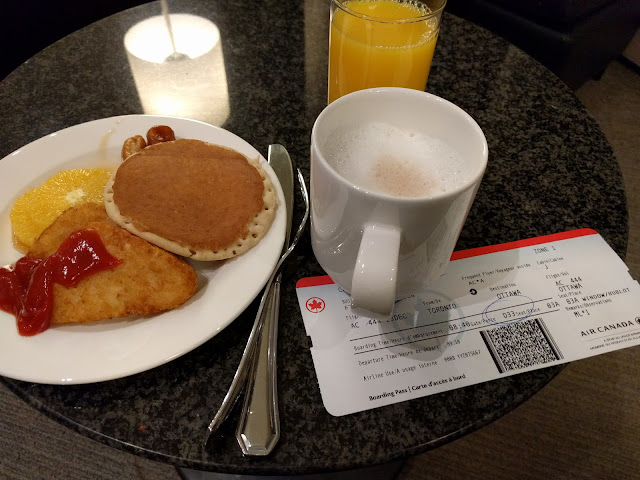 Since I have almost an hour to spare, might as well go get a shower, and get away from those screaming kids.

I was surprised the shower was available right upon my request, considering the lounge was pretty much at its maximum capacity. 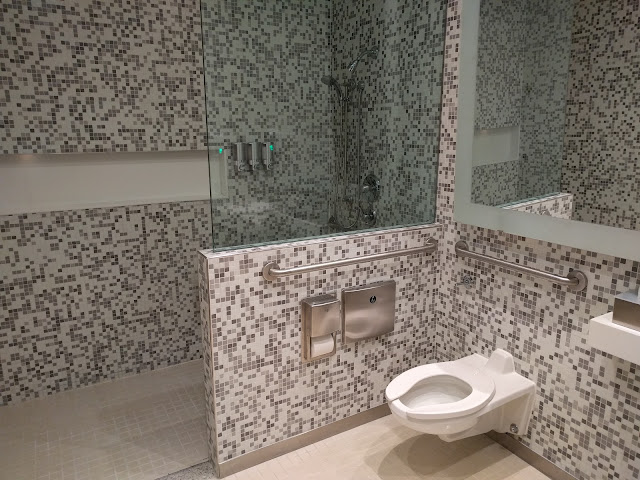 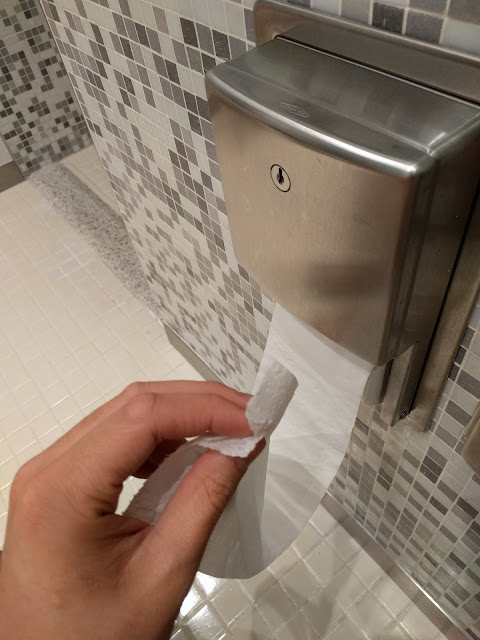 I'm in the fast lane From Toronto to Ottawa but diverted to Montreal...


Sorry, that song stuck in my head when I was boarding the plane

To be honest, it's just an ERJ, it doesn't matter if you're in Zone 1 or Zone 4, it won't take too long for everybody to get on board. 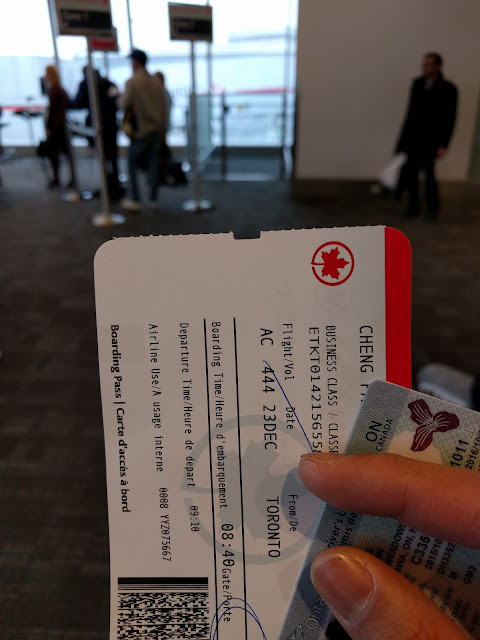 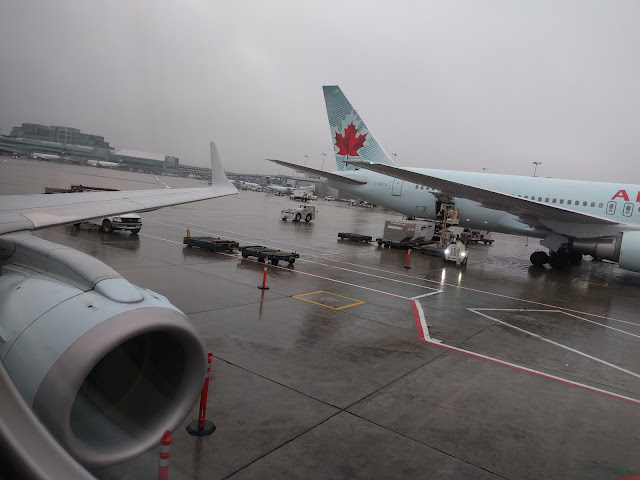 Fair enough legroom for a regional jet
1+2 layout, and that's what I love about the E-jet.
No chatty seatmate trying to initiate a conversation about the meaning of life when I'm travelling alone> 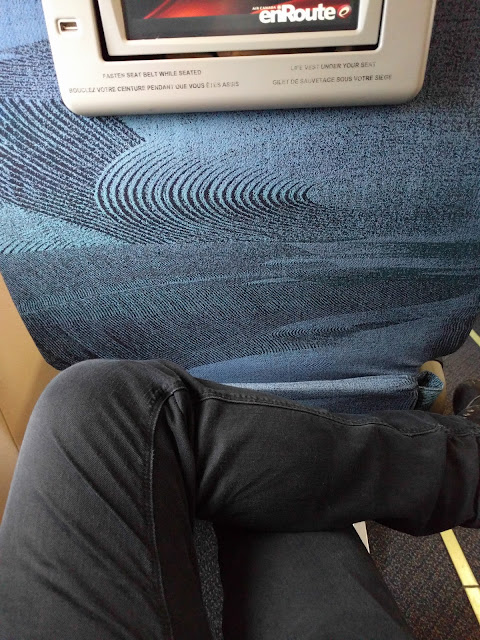 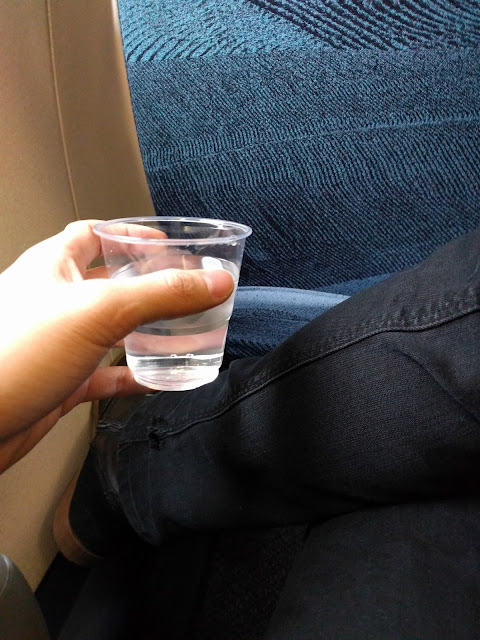 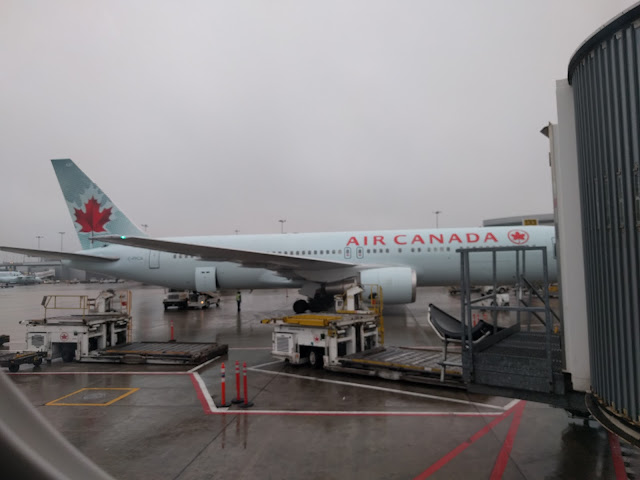 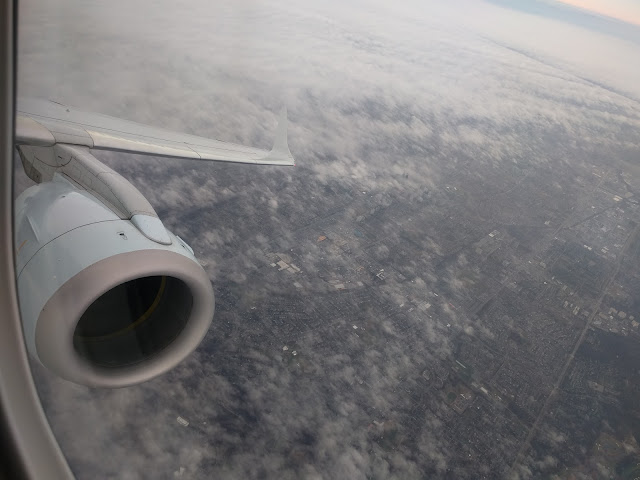 Toronto Harbourfront, couldn't see the CN tower from this side unfortunately 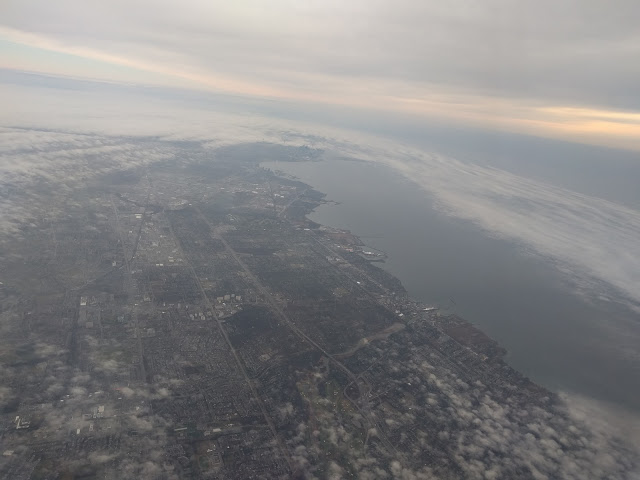 Another thing I like about the E-Jet, sizable windows and every row gets exactly a pair of it, not in between two...  Maybe not in the case of Business class, in the case I was seating awkwardly between two (except the second one was blocked). 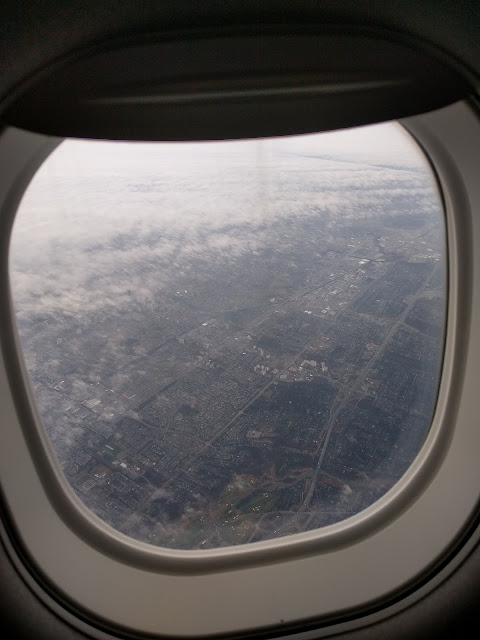 First Gen enRoute XM AVOD system, nothing special about it but I believe Air Canada is the very few carrier especially in North America that offers Personal IFE in all their fleets including narrow body Regional Jet.


IFE doesn't really matter to me, I usually just leave it on the flight info page and look out at the window 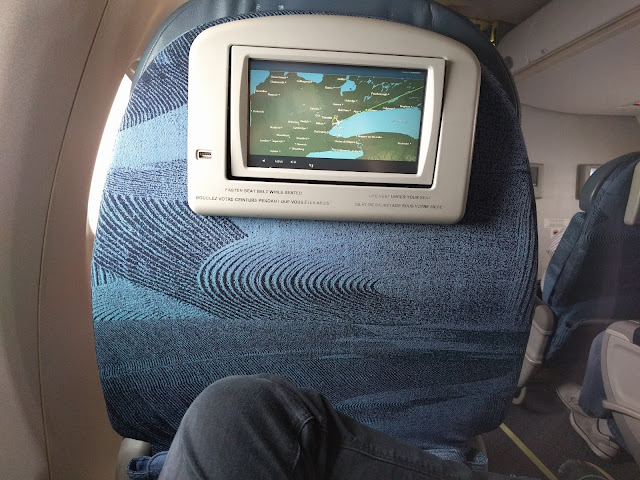 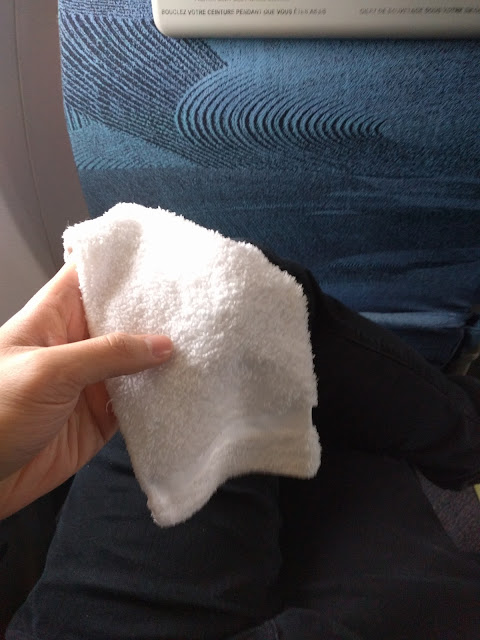 be aware that the ERJs do not equip with an oven, hence no hot meal will be available.

If this is a big deal to you, avoid the E-Jets, I guess? Since Air Canada uses the E-Jets for some Sun destinations which may exceed 4hrs. 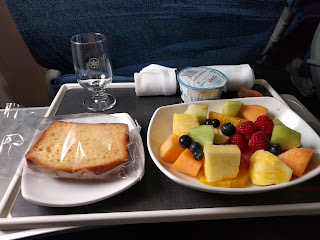 Not that I'm complaining, but a little disappointed considering Porter offers a several variety of tea in Economy. 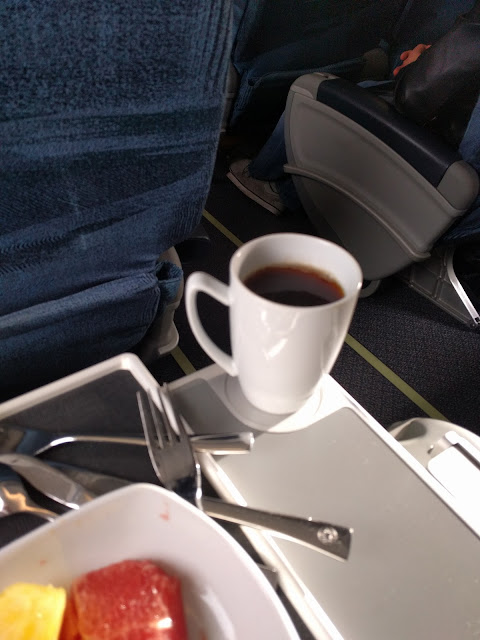 Almost forgot to mention, this airplane is equipped with In-Flight WiFi
I forgot the pricing but it was quite fairly price from my memory and the first 30mins is free

I'm afraid we have some bad(good to me) news...
The visibility in Ottawa is too bad, below the safely tolerance
We were holding above Perth and hoping it will improve (which it did, right after we decided to divert)
and we were holding below FL100, Internet access was disabled... 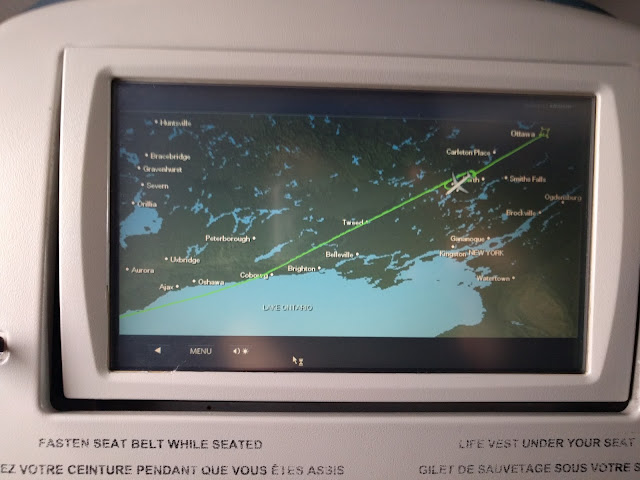 after holding for 45 mins, we do not have enough fuel on board to make a landing attempt in Ottawa, and it would be a safer bet to divert to Montreal and refuel.
Here we go, en route to Montreal 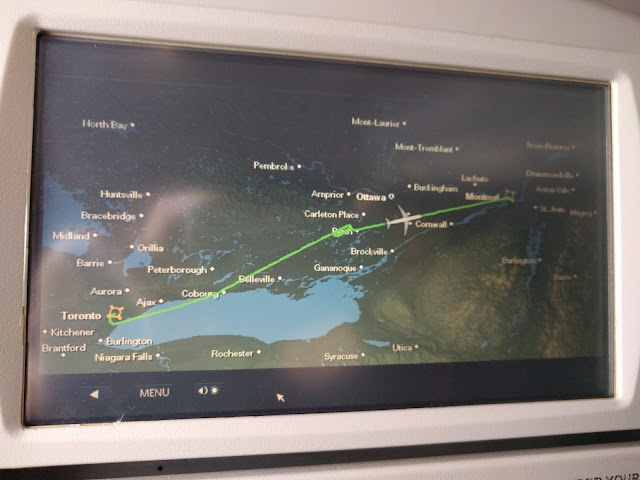 
the ceiling was really low 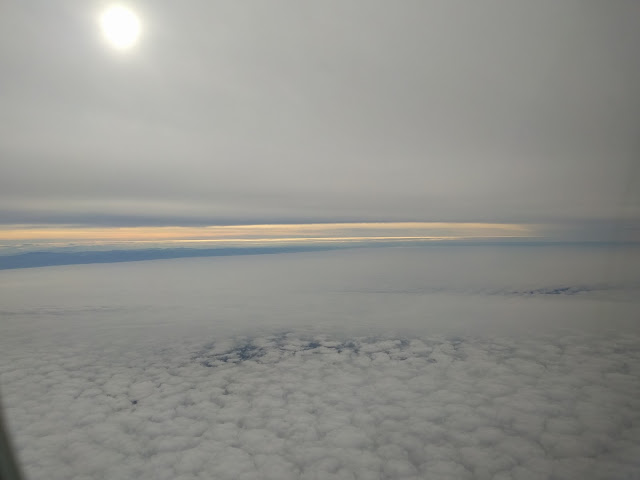 Unfortunately, I stopped taking picture after this>
But here's some video I took during landing at take off in Montreal and the Go Around!
Landing in Monteal
Take off in Montreal
The takeoff was quite powerful, not sure if it were maximum power but certainly not the flex one we usually get.
Our first attempt to land in Ottawa was unsuccessful due to the pilot could not see the approach light when we hit minimum (according to the PA).
Go Around!
We finally landed in Ottawa, people were applauding at touch down
We were about 2 hours behind schedule, I think I was the only passenger who was overjoyed about the entire thing...
The final landing in Ottawa
Here we are, the end
Thank you so much for reading!
This is my first flight report in at least 9 years, but it will certainly not be the last one nor it will come in another 9 years.

Comments are very much appreciated

Teaser for the next report!
Should be an easy guess, the door is quite unique. 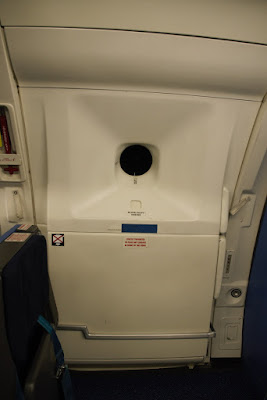 You did a good job with your report. I think that anyone who would complain about the cold breakfast should be lucky to even get a meal. You would not see that on a domestic US flight of that length.
God bless through Jesus, Jeff
Top

Hi and thanks for working on this trip report.

Bit of an inconvenience being diverted but you got there safely in the end.

Good to see that the E190 with AC has aligned rows with windows in Y. It is disappointing to book a window seat only to find they are misaligned, as happened on an E170 with another airline on one of my flights.

Thanks for sharing,
Weary
A man may learn wisdom even from a foe - Aristophanes
Top

Quite the journey for what should normally be a short and easy flight. Thanks for reporting.

As for the breakfast, I think some of AC's E190s do in fact have ovens. I received a hot meal in business class on a YUL-YEG flight last year.
Top


The E190s (and E175s) are equipped with ovens. More likely that on a flight with an average duration of 35 minutes air time, with ... about 20-25 minutes above 10,000', serving a hot meal sometimes is impractical.
Just because I stopped arguing, doesn't mean I think you are right. It just means I gave up!
Top

I remember many AC cafe hot items are not made available (Possibly due to limited storage) then I automatically assume they don't equip it with ovens.

IIRC, United's E175 is indeed not equipped with ovens.
Unless he was misinformed http://www.forbes.com/sites/grantmar...l-jet-into-its-fleet/#11b2fe903a0f