After a 5-day stop in Dallas for a family event, my daughter and I headed down to the land that a mouse built to spend even more time with immediate family in that part of the country.

First stop was the consolidated rental car center to return my vehicle. No hiccups, took all of about 4 minutes. From the outdoor garage, we walked through the upper level of the facility (pick-up is on the ground level), double checked the very strategically placed departures display in the hallway (impossible to miss), and back outside to the shuttle bus stops. Each terminal has its own direct bus route from the rental facility, so just head for the sign with your terminal. The driver was friendly and help a group of lady travelers with their bags. I was asked what my gate was (A23), and was informed that would be the second stop at the terminal.

The terminal has several self-baggage tagging machines. Just enter your info, check the appropriate responses on the screen, and it will print out all of your baggage tags, baggage receipts and boarding passes. There are helpful people close at hand there to assist if needed. Once the bags are tagged, just head on over to the counter where they were placed on a scale (the group next to me had a bag that was 10lbs over), and sent off on the belt.

Given the recent situation with TSA at ORD, I did a Google search the night before for wait times and I surprised to find there is a TSA website just for this (apps.tsa.dhs.gov). According to the reports on the site, the wait at the security checkpoint at gate A21 in Terminal A has been in the neighborhood of 10-30 minutes.

I’ve been a TAS pre-check/Global Entry user for a few years now, but surprisingly, pre-check appeared on my teen-age daughter’s check in info on AA site (she has her own FF number and got her passport about 30 days ago), and on the boarding pass. We have traveled numerous times in the last 8 years, so I guess that helped the situation. This very topic was in a recent thread in the civil aviation forum recently.

The pre-check line was noticeable shorter than the other line. Experience being what it is, I wasn’t wearing a belt or shoes that had any kind of metal, neither one of our laptops had to be taken out, and I walked through the detector with nary a beep to be heard. My fashionista daughter however had to go through the detector a second because her shoes set it off. Even with that tiny delay, we were done within 10 minutes.

I knew from reading the lounge policy on AA’s website that we weren’t going to be able to use the Admirals club lounge even though we would be flying domestic F. No matter, there are plenty of places to eat in the terminal within easy reach of our gate. California Pizza Kitchen was settled upon, and all was good. 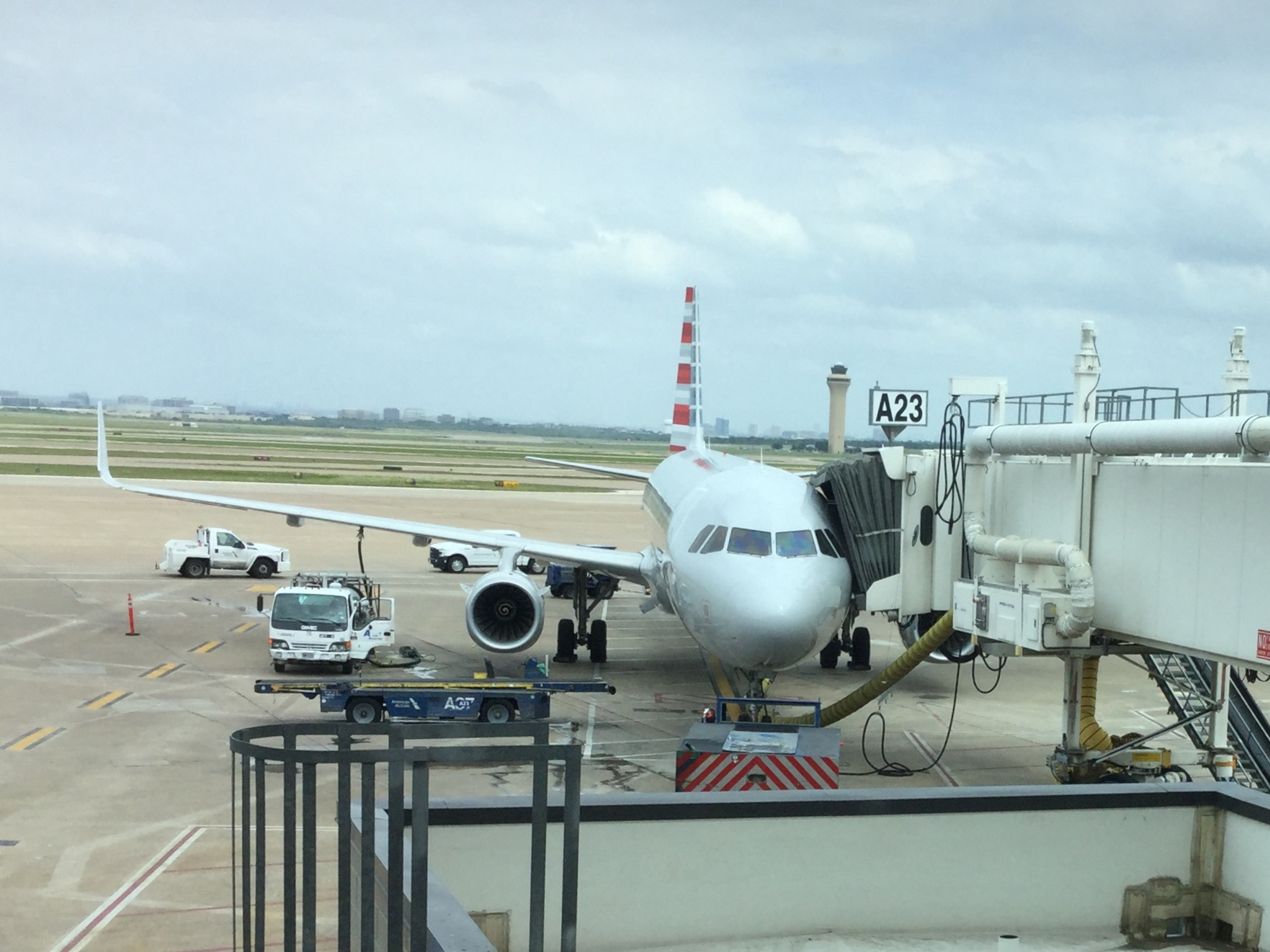 Boarding was scheduled to begin at 1625 for a 1655 departure. From the amount of folks at the gate, it was going to be a full or near full flight. Having taken this flight numerous times over the years, I noticed that there were very few children in the waiting area, which is the exact opposite to what I’ve normally experienced. It’s all in the scheduling, as this was my daughter’s last day of school for the year, and most of the schools still had another few days or a week to go before summer vacation. There were a few elderly passengers that required wheelchair assistance, and they were boarded before the standard boarding announcements were made.

The boarding process went smooth. Once the majority of the F passengers were seated (say 14 out of the 16), the FAs started serving drinks in real glasses, all while the Y passengers were boarding. Granted, the aisle in F was noticeable wider than in Y, but they still had to turn sideways to squeeze past the still boarding passengers. I’ve never seen it taken to that level before on a narrow body. Music was playing through the PA speakers while boarding was in progress (a mix of 80 & 90s pop, my favorite). The load factor for the flight was all 16 F seats occupied (easily seen by just casual observation), and 150 of the combined Y/Y+ seats filled based on the captains announcement mentioning “166 of your fellow travelers” leaving 15 seats empty. An all-business FA hung up my coat, and for the rest of the flight, the other genuinely cheerful FA did all the serving. The F cabin was in good condition, with a very up to date appearance.

OK, the seat and surrounding areas. The seat was wide and comfortable with plenty of foot room. 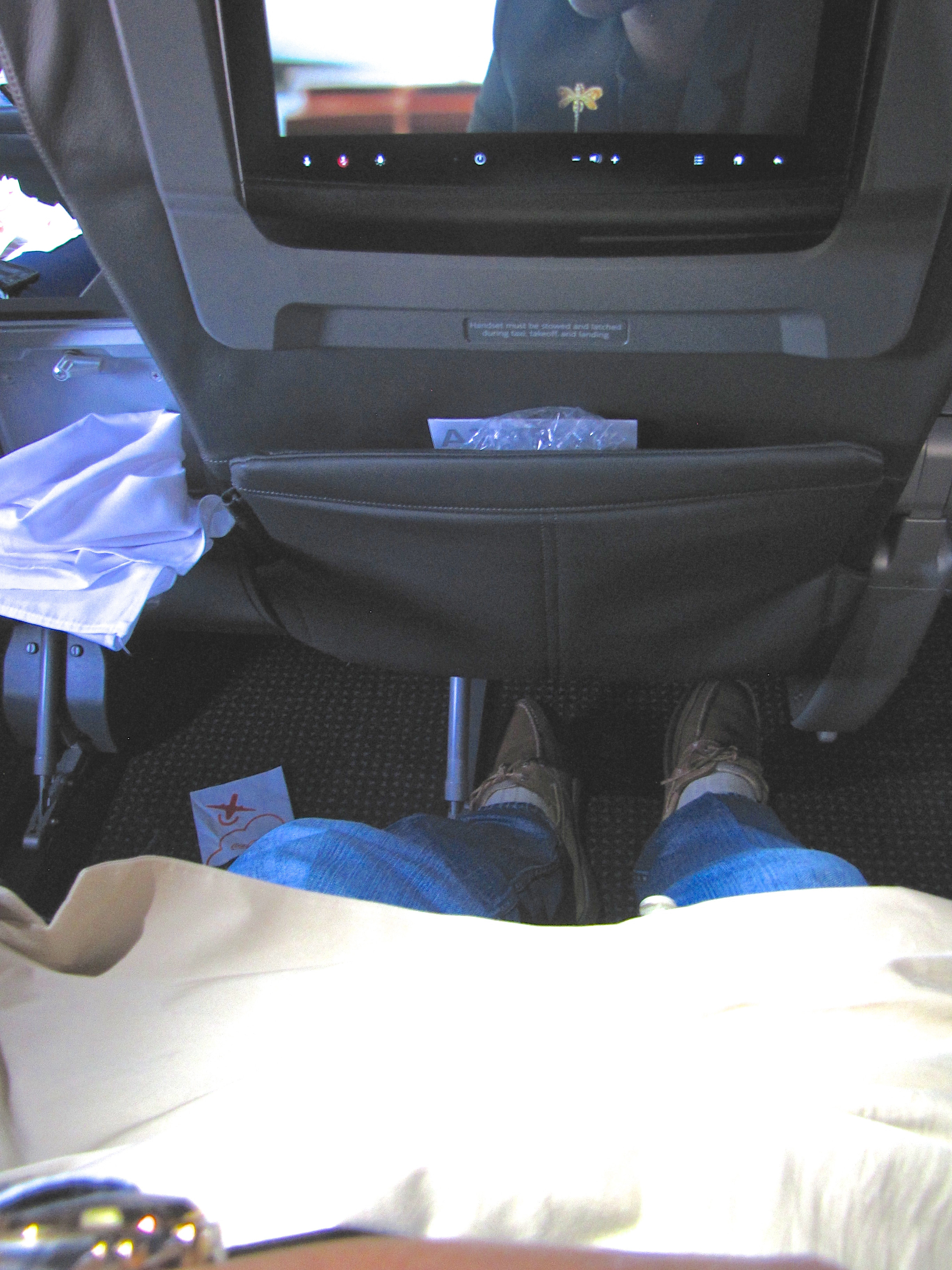 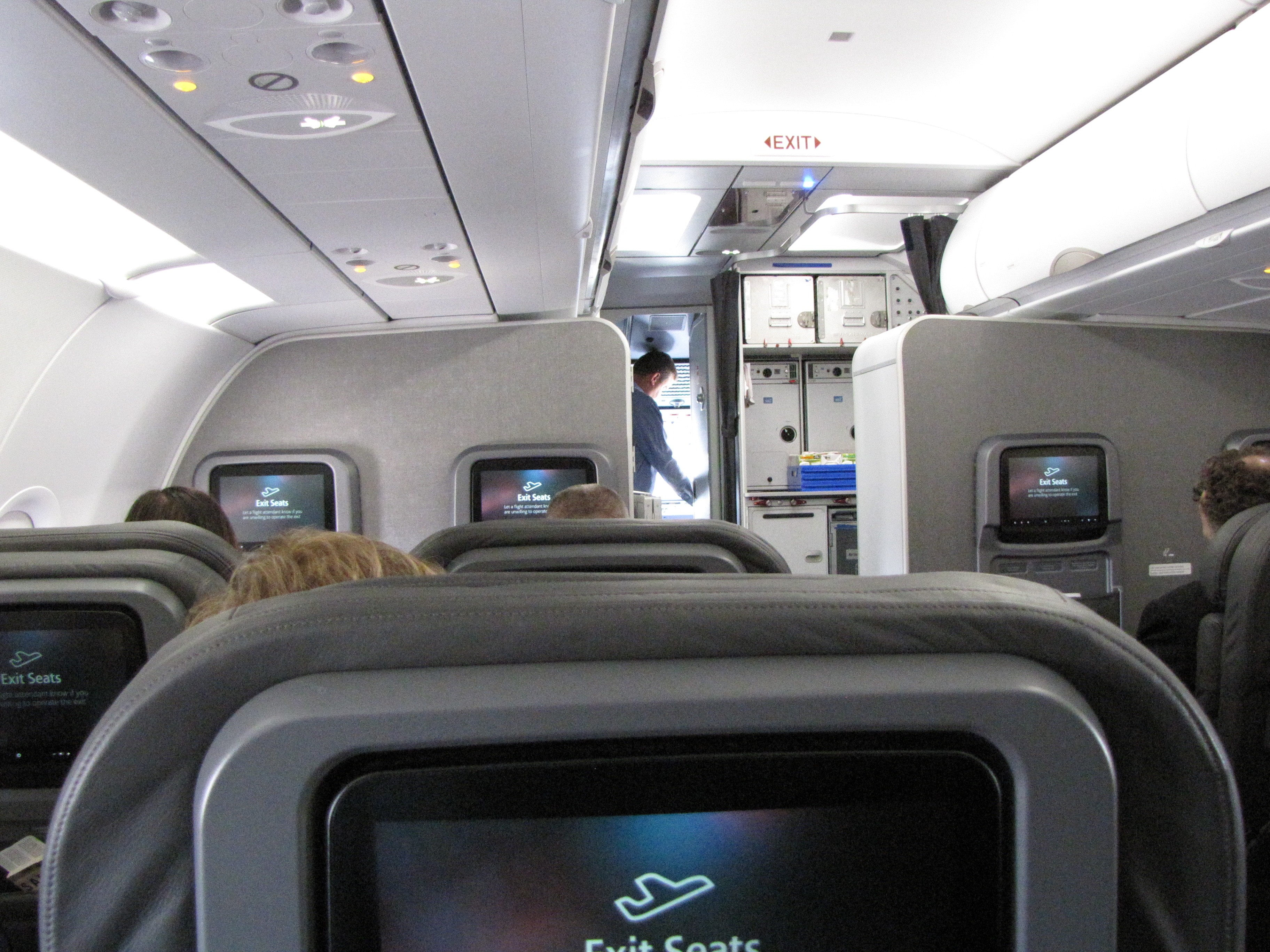 The IFE hand controller was in the inside surface of the armrest. Overhead, you have positional air vent and a reading light that could be controlled from the handset, the screen, or by an on/off button next to the light. The USB, a/c plug, and headphone jack were all located down by your leg between the seats. The seat had a Swiss army knife-like array of trays for you to use. You have the small drink tray, the main foldable tray that pulls out of the inner armrest that you can keep folded in half with a drink holder in the surface, and another tray that folds out from the rear of the center armrest from the seat in front of you. 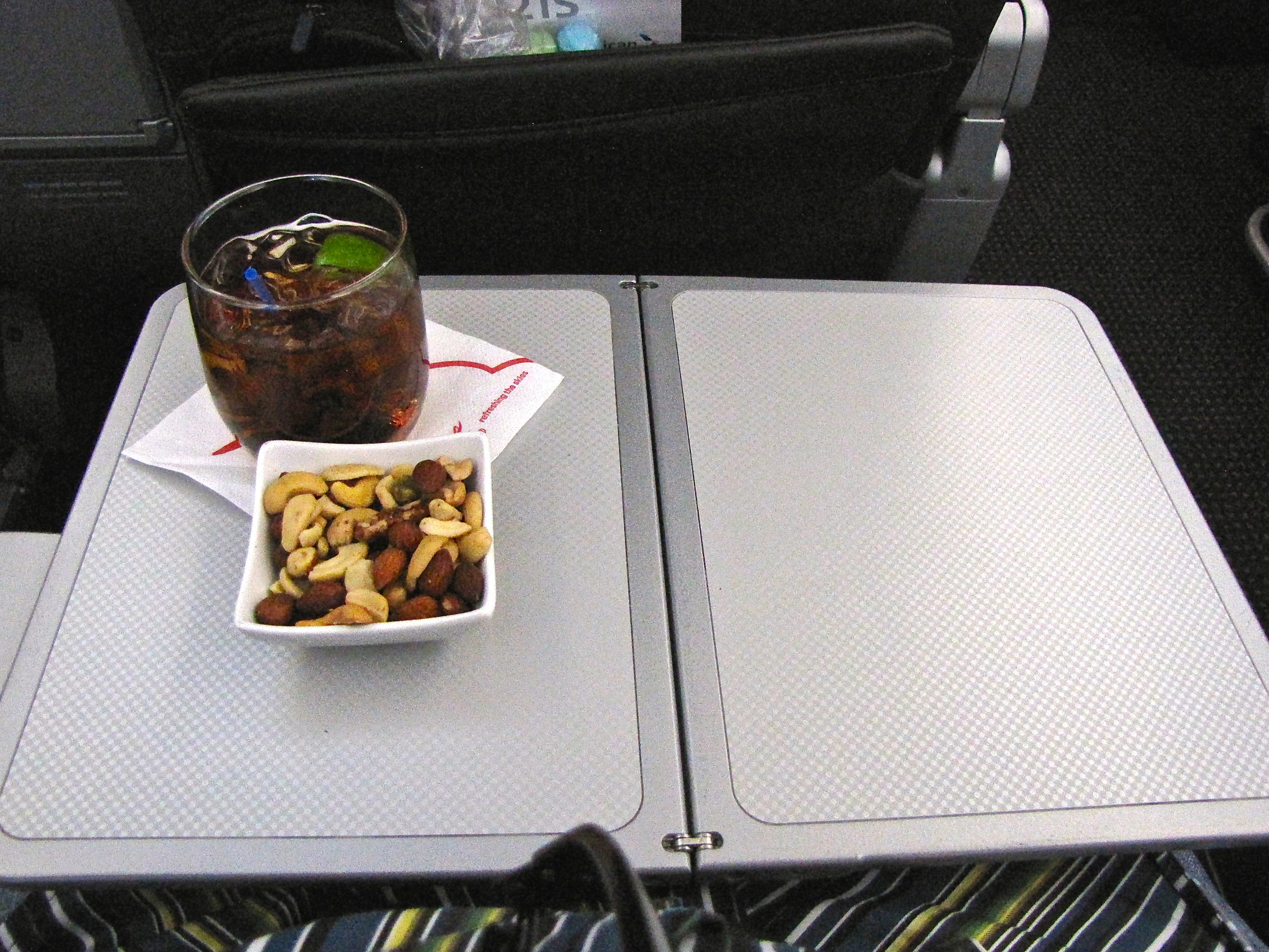 There was a point in the flight where every tray had something on it. 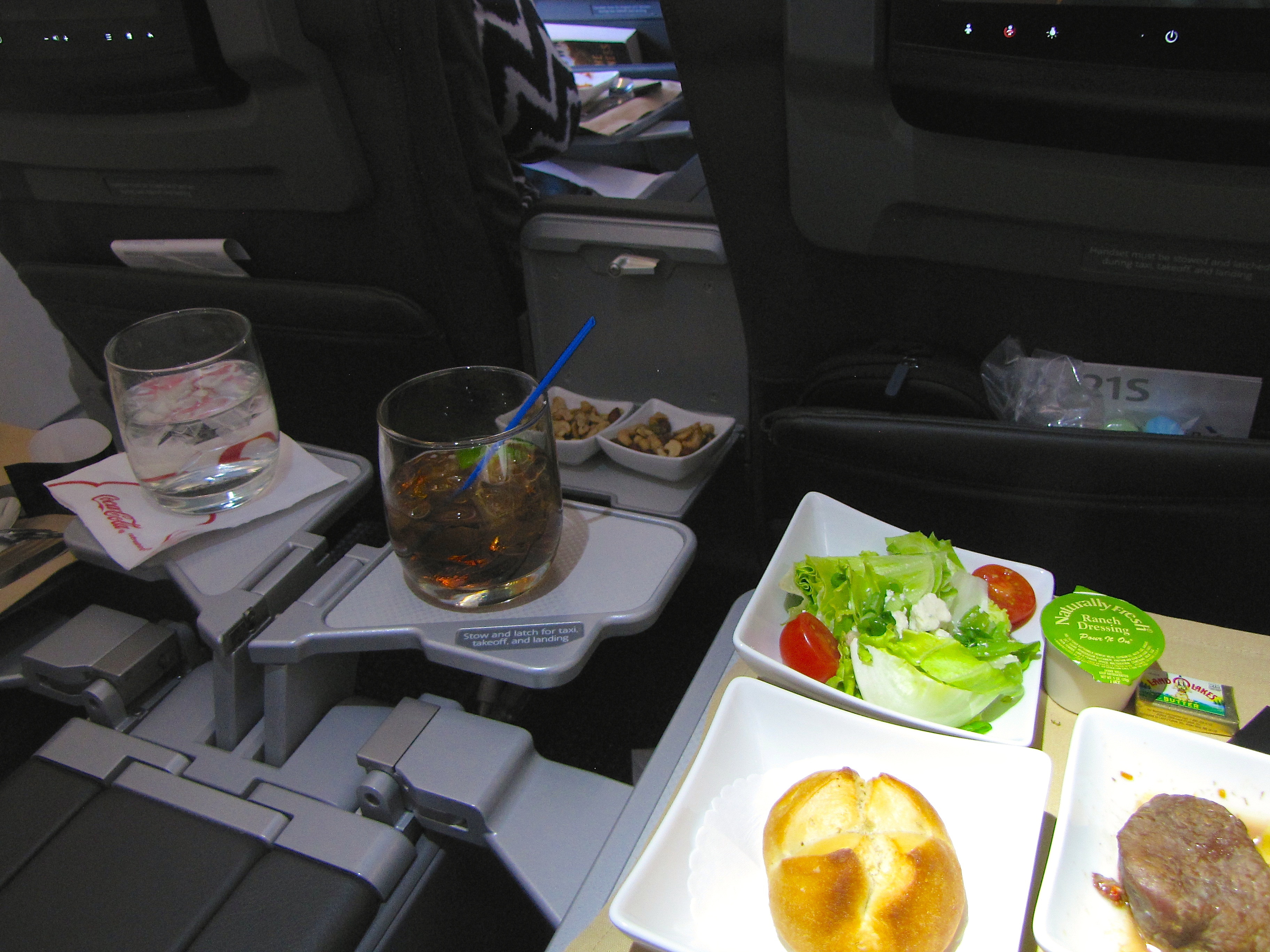 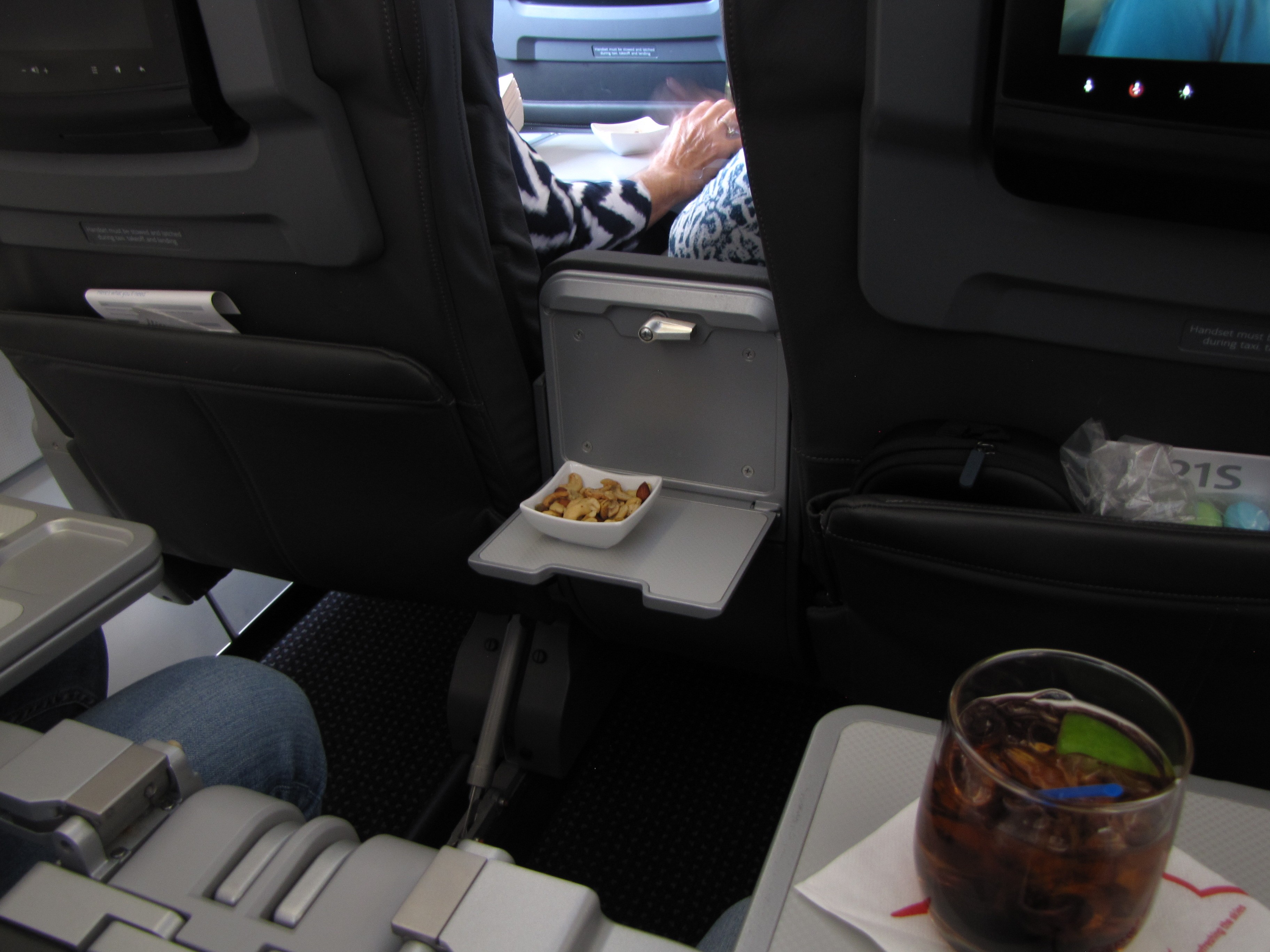 The seat bottom slides forward when you recline the seat back. The screen can be touched controlled or via the hand controller. It does tilt within its enclosure to compensate for the angle of the seat in front of you being reclined. Another feature of the screen I was grateful for was it’s directionally in viewing, meaning it could only be viewed clearly from directly behind at a typical viewing distance. I couldn’t see what was playing on my daughters screen on the window seat right next to me and there were a few scenes on the movie I was watching that I was glad she couldn’t see. 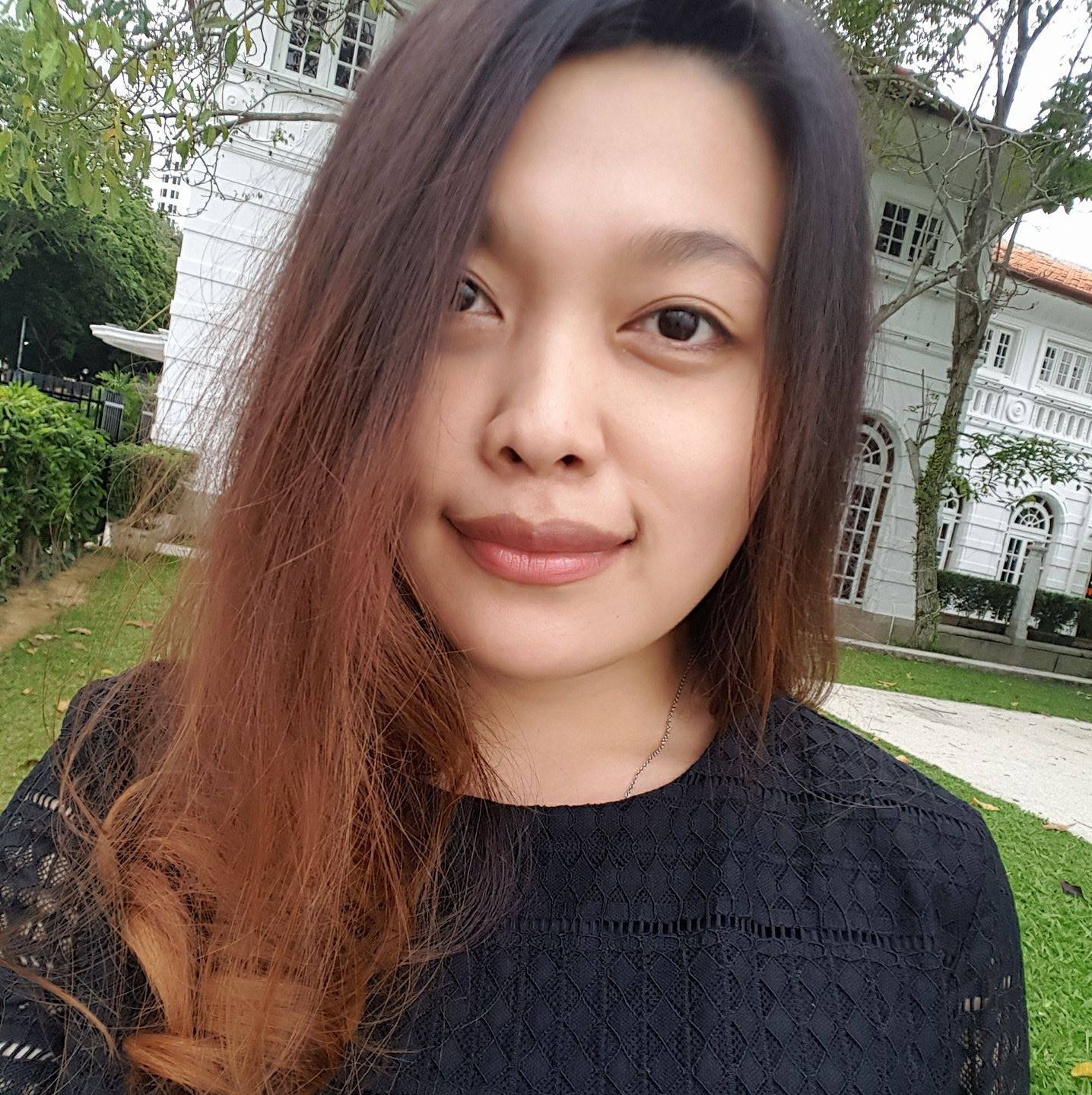 Boarding was completed and pushback was at 1650. The FAs took meal and drink orders while we were taxing out to the runway. Take off was brisk, with a great buzzsaw sound from the engines until they were throttled back during the climb. During the climb shortly after take off, everyone was treated to in-flight automatic demo of the IFE system and a commercial for the Citi AA credit card, whether you wanted to see it or not. The audio was played over the main PA speakers while every screen played the same advert. The content of the IFE pretty much matched the content on the 777 I flew over from LHR 5 days previously. IFE was available from boarding till we were at the gate at MCO.

Hot towels were distributed 30 minutes after take off, and warm nuts and drinks 5 minutes after that. Nut refills were available. About 15 minutes on, the main meal was served. I went for the beef, but the pasta that came with it contained crab or some sort of seafood like that, so I just ate the salad with the supplied ranch dressing, and steak. Bread was served a few minutes after the main meal was put on your tray. The FAs came around to offer a choice of red or white wine after the bread service. Desert was a yummy warm chocolate chip cookie. 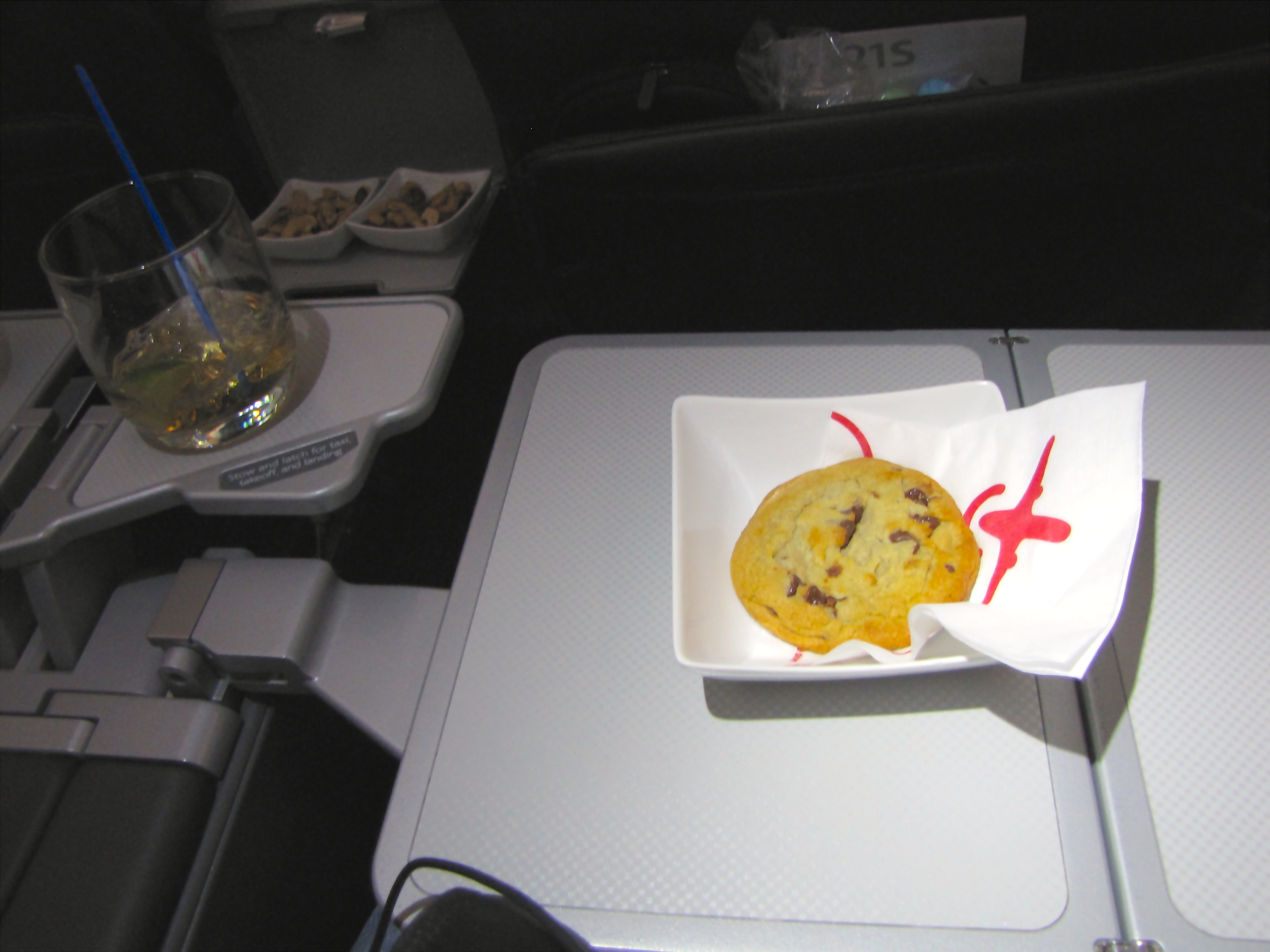 After everything was cleared, we had about 60 minutes of flight time remaining, so I just settled back and watched a movie that I’ve been meaning to watch for a while. 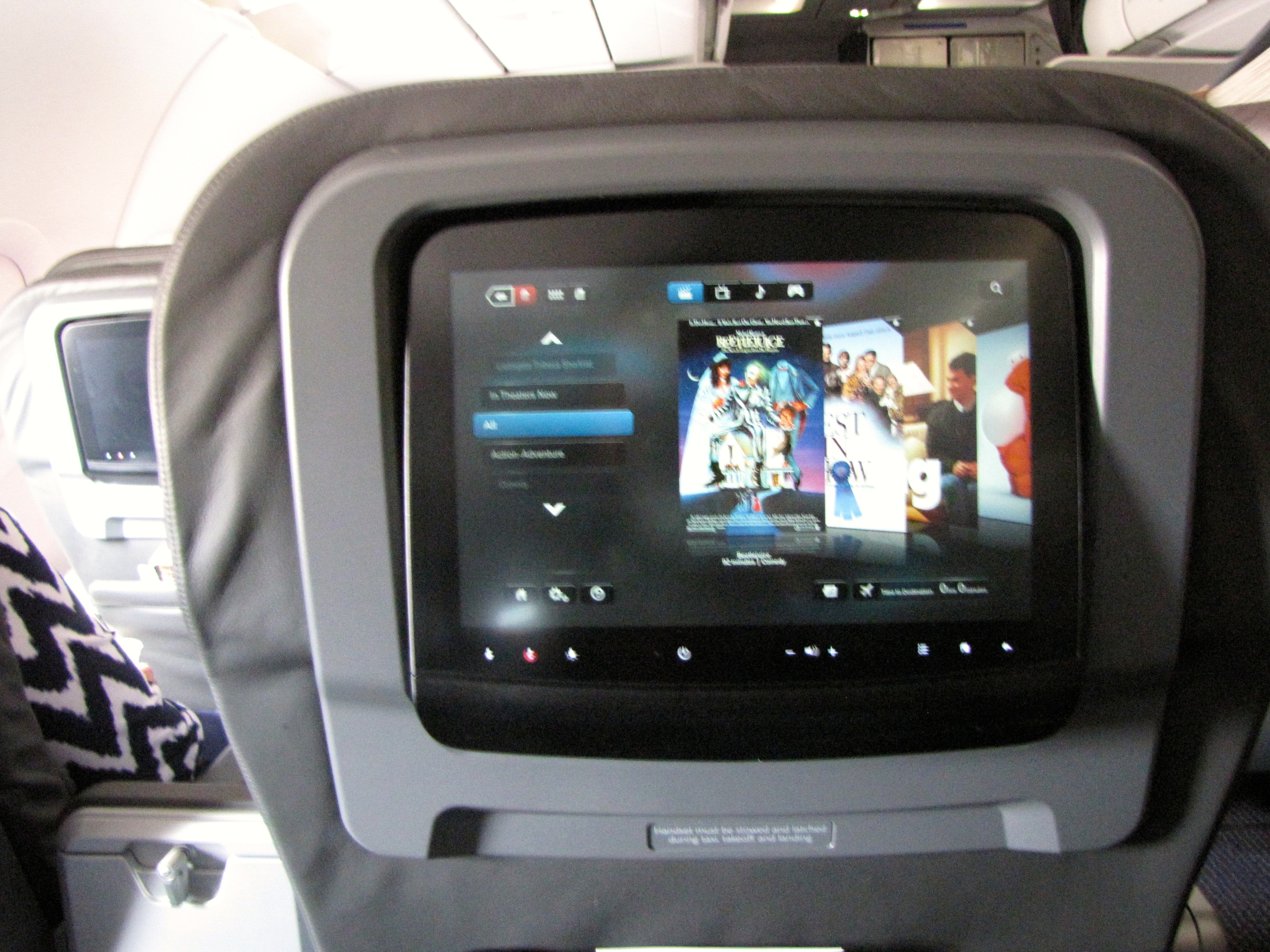 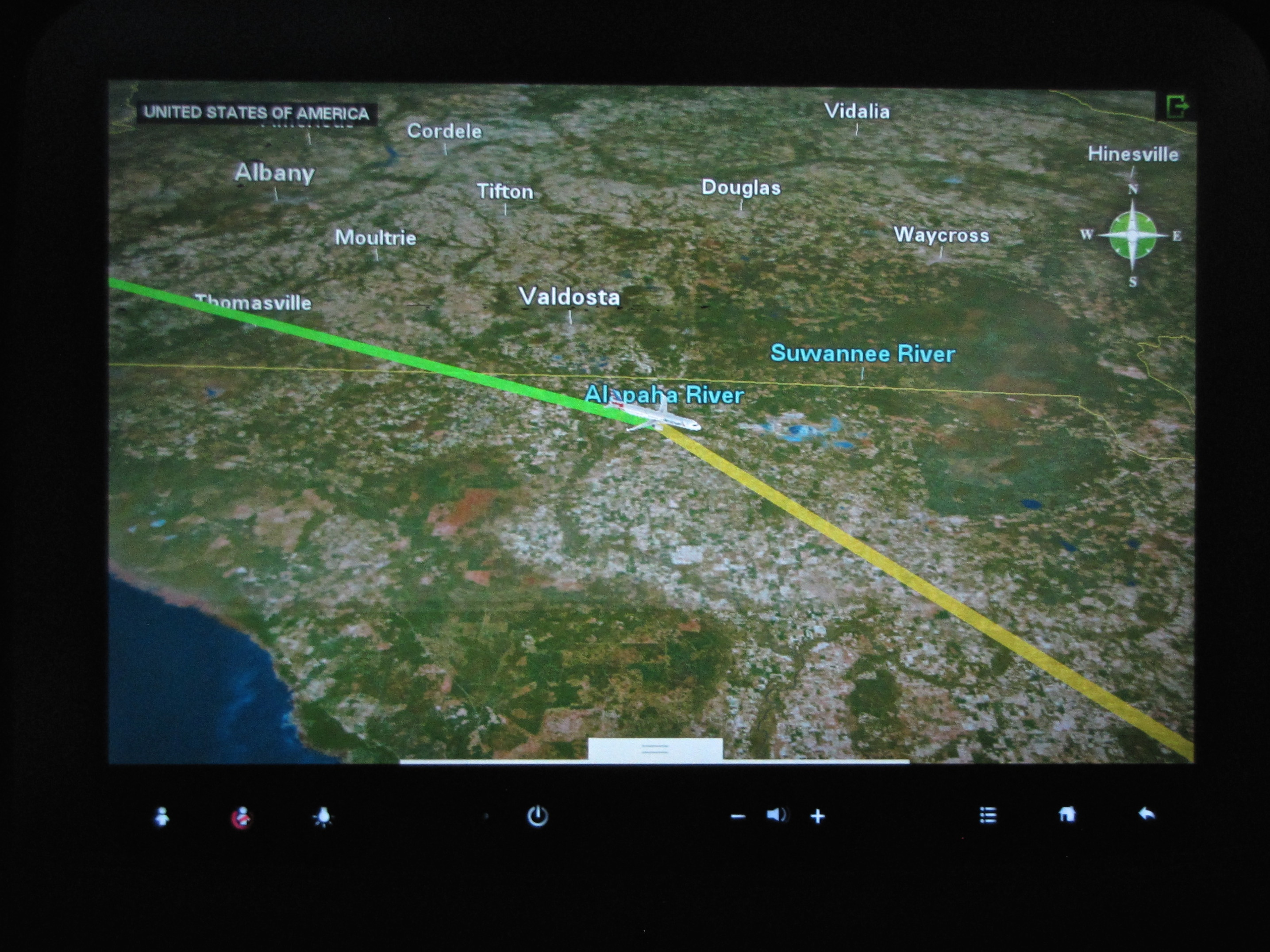 The descent was unremarkable, the FA returned my jacket about 15 min before landing. Disembarking was orderly, and taking the tram from the gates to the terminal was without surprise. 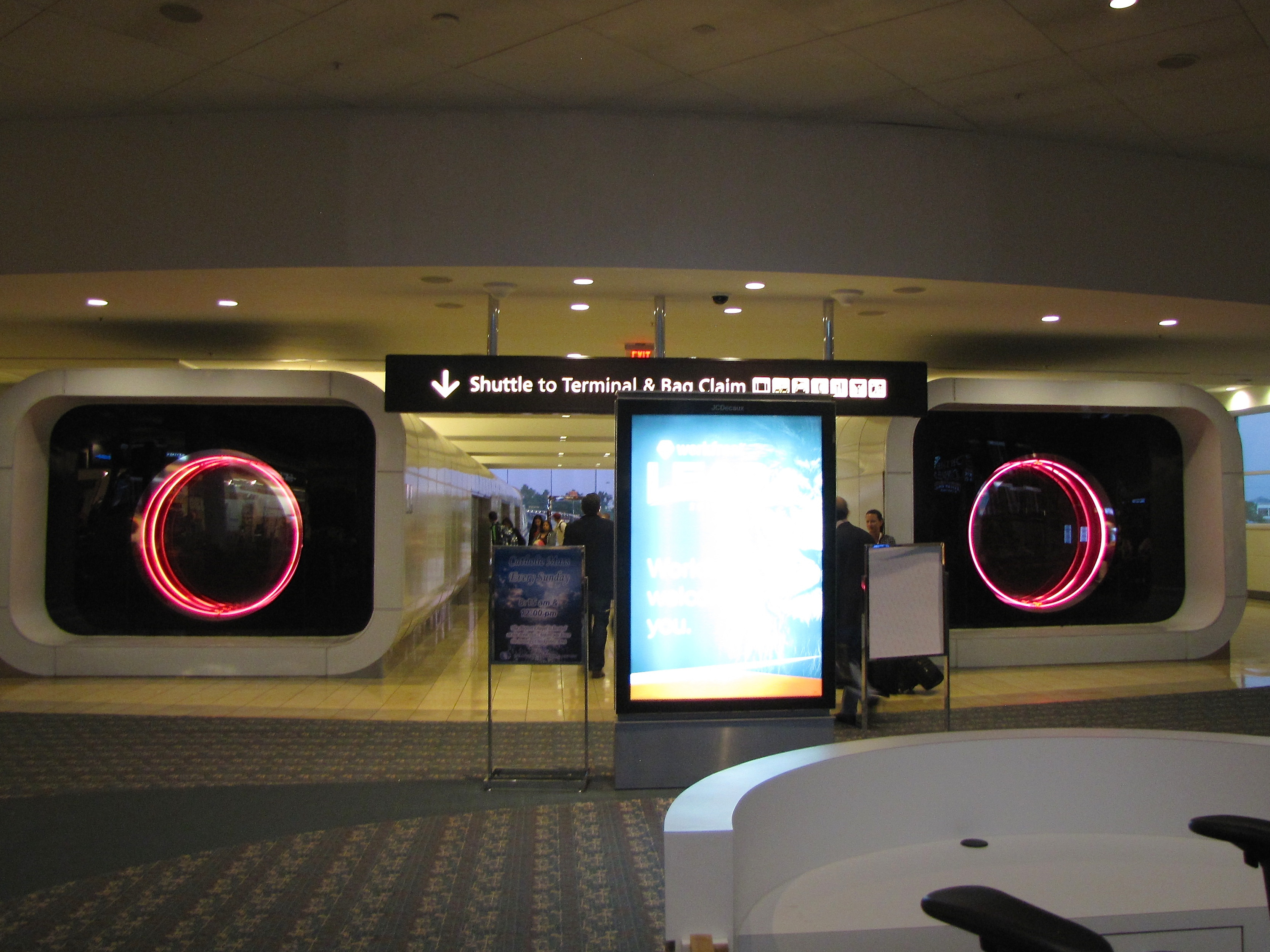 Next trip, MCO-MIA-BGI in a week’s time.


Somebody correct me if I am wrong, but you dont get lounge access based on class of cabin on domestic flights unless you fly in J/F on the premium transcon routes between LAX/SFO-JFK.
Work Hard, Fly Right
Top


Thats pretty much what AA's website said. The key wording is "free access" to the lounge for the non-premium domestic routes. Unless you are on those routes, its $50 per person for lounge access.
Top


Either you fly premium tranacons, pay or get in through FF status on domestic flights.
Work Hard, Fly Right
Top

Nice read and pictures, thanks for sharing.