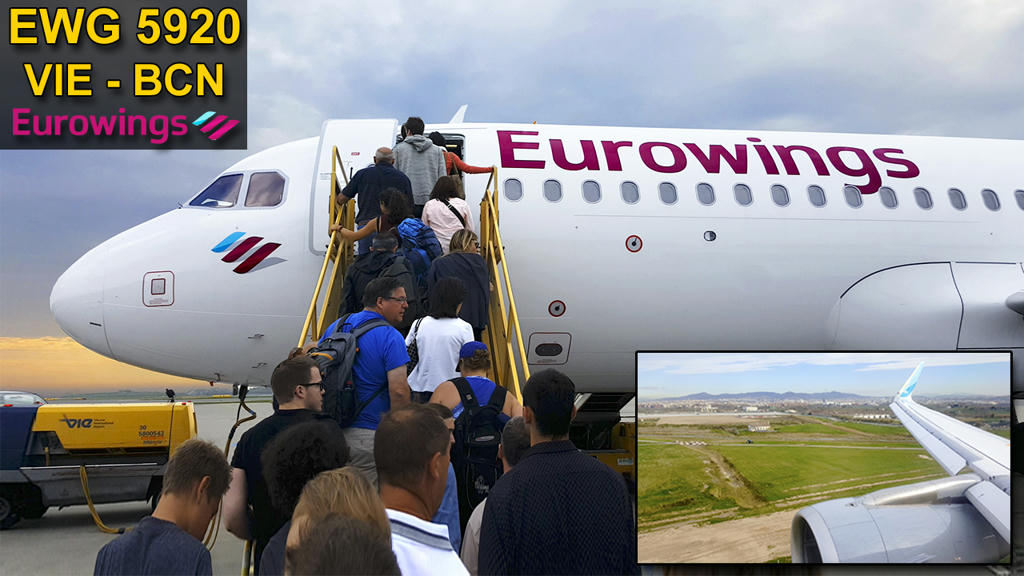 Eurowings Europe was created in August 2015 as a subsidiary of Lufthansa and has its main base at Vienna-Schwechat Airport. By May 2017, there are 5 Airbus 320 CEO based at VIE, flying to all Europe: London, Madrid, Barcelona, Rome, Paris, Canary Islands, Balearic Islands...

Let me recommend you this airline. This was my third time flying with them and all of them were perfect. 100% recommendable.

The daily flight to Barcelona Airport departs in the early morning, at 7:25 am. We arrived at the airport with more than enough time to visit the Business Lounge (thanks to our Miles&More status and the Smart Fare we selected for this flight).

The Austrian Airlines Lounge is quite big and well positioned, at the very beginning of the F concourse. All the main services of a Business Lounge are offered here: worldwide press, drinks, hot food (it would be nice to have 1 or 2 additional options), bakery, showers, fast WiFi connection, computers room, relax room... And one of the most important things: it looks and, in fact, it is very comfortable for long stays.


BOARDING AND TAKE OFF

Almost all the flights of Eurowings Europe board at Vienna by bus from the terminal. This was our case. It's less comfortable than the jetway, but if you want cheap prices, you must sacrifice some comfort... Nevertheless, the airplanes are always close to the terminal, so the time from the gate to the plane is less than 3-4 minutes.

Punctually we took off from runway 27, flying directly to the city of Vienna. At that time in the morning, the Sun was rising over the horizon, so the views of the city while climbing were so beautiful.

Once established at cruise level the catering service started. For the passengers with the Smart Fare, there's a little snack service included (you can see all that they offer in the video) in addition to the common menu for all passengers.

Soon after takeoff, we started to fly over the Alps. This is the best part of any flight to/from Vienna (if you're flying to/from the West), especially when you fly in the early morning or close to the sunset. The light at those moments of the day is the best to contemplate that wonder of nature.

Close to start the descent to Barcelona, the crew offered some duty-free products at the usual prices on board low-cost airplanes. Nothing especial...


DESCENT AND LANDING AT BCN

Once over the Mediterranean Sea, we started the descent to Barcelona Airport, close to Girona (to the north of BCN). We flew in parallel to the shore until we reached Barcelona city. The approach to runway 25R allows you to have some spectacular panoramic views of the complete city. I really recommend you to check them in the video.

Some minute ahead of the scheduled time, we landed at BCN airport, where lots of private jets were parked due to the World Mobile Congress that was taking place (like all years) at Barcelona city.

Eurowings uses at Barcelona, like almost all low-cost airlines (except Vueling) the old Terminal 2. It's old but well refurbished. Some other low-cost airlines were there, like WizzAir, Ryanair, EasyJet, Norwegian or Transavia. But also other airlines use the terminal 2, like Aer Lingus.

After disembarking, we took the free shuttle bus to the Terminal 1, where I took a Vueling flight to A Coruña, but that is another story...

As always, I know that in this forum many people prefer the photo-reports to the video-reports, but I would like to ask you to give this one a chance. I'm sure you'll enjoy the 4K video review!

Users browsing this forum: No registered users and 22 guests