On August 21, I was supposed to fly DL1014 to SLC and continue on DL3727 to JAC for a backpacking trip in the Wind River Range. I was very excited about the flight because I had never been on an A330 before. Unfortunately, at 4:14 am (already at the airport) we learned that our A333 (N803NW) had a mechanical issue and we'd be delayed, departing at 8 am, not 6. At 6 am we learned we'd be departing at 11 am instead of 8. Then 12:25 pm, then 6 pm. Pretty early in the morning we learned that we'd be getting a substitute aircraft from Detroit...an A350! At first I was pumped because this would be my first and probably my only opportunity to fly on an A350 since I rarely travel internationally. But, over 12 hours in the airport got quite old and this meant I'd need to spend the night in SLC. Even as a plane nerd excited to fly the A350 and a Delta fan, I was upset. The other passengers clearly were too, but fortunately all but one passenger seemed to keep their cool and even that one guy wasn't too disruptive.

The A333 eventually got towed to the hanger, but it looks like it flew to Amsterdam later that day. No idea what was wrong. 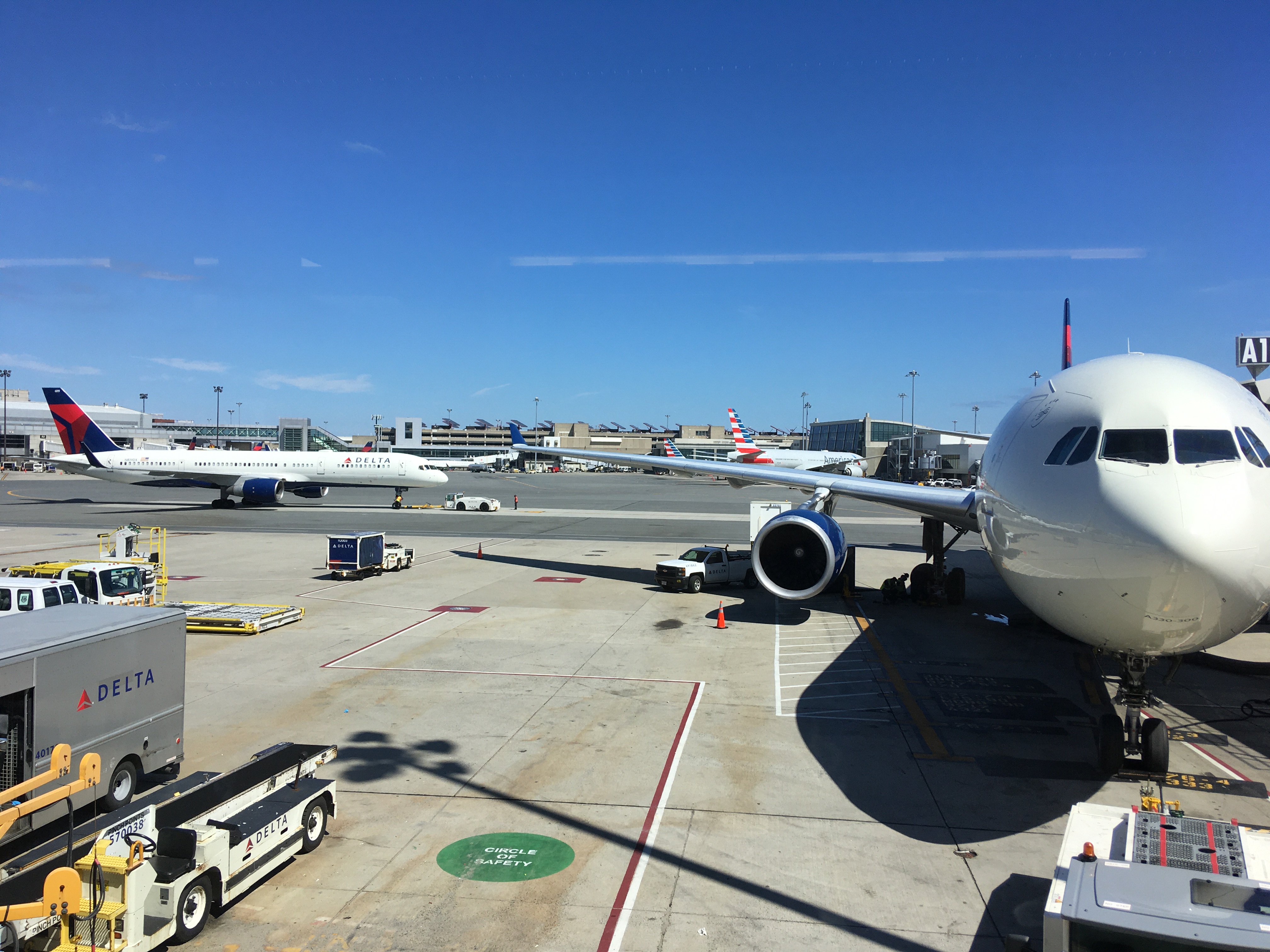 The A359 (N606DN) flew empty from DTW as DL9970. When it arrived, it took about an hour for the ground crew to get the jet bridge to L1. L2 was initially attempted unsuccessfully. I'm not seeing it in my pictures, but I think that "A350" or "A359" was already painted on the concrete. The plane had to be pushed back slightly and that was also a bit of a cluster or maybe it was just training. There were about eight personnel crowded around the nose gear and tug. As it pulled in, everyone rushed to the windows to watch it and get pictures. The gate agent hyped up the plane and stated this was the first time a Delta A350 had been to Boston. People were amazed at its size and were understanding of the challenges of having a new plane type at the gate. 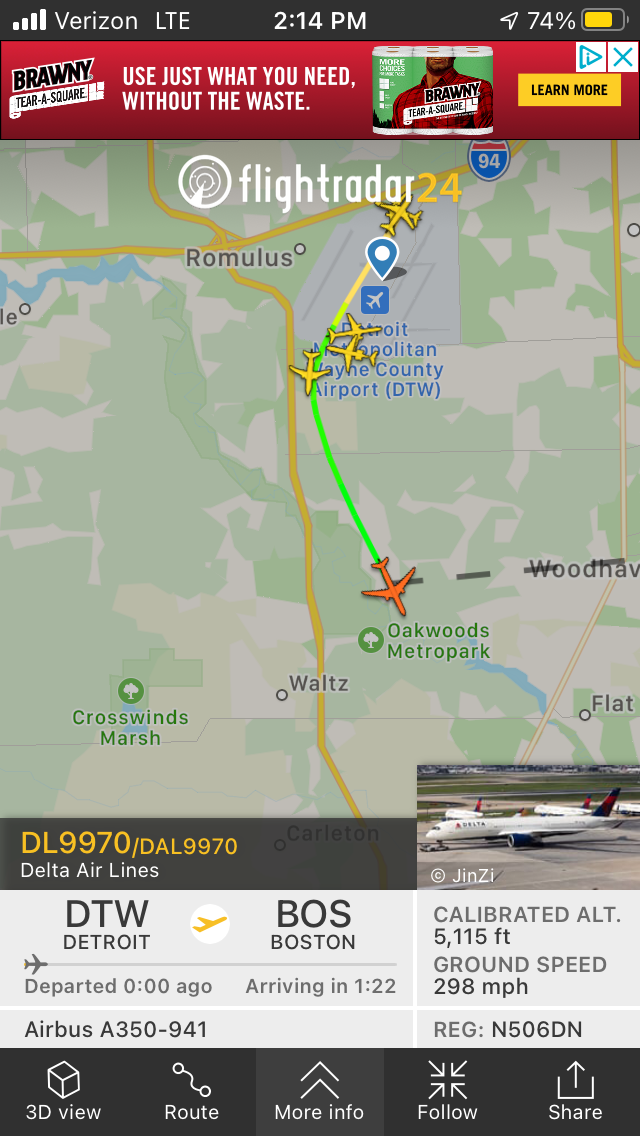 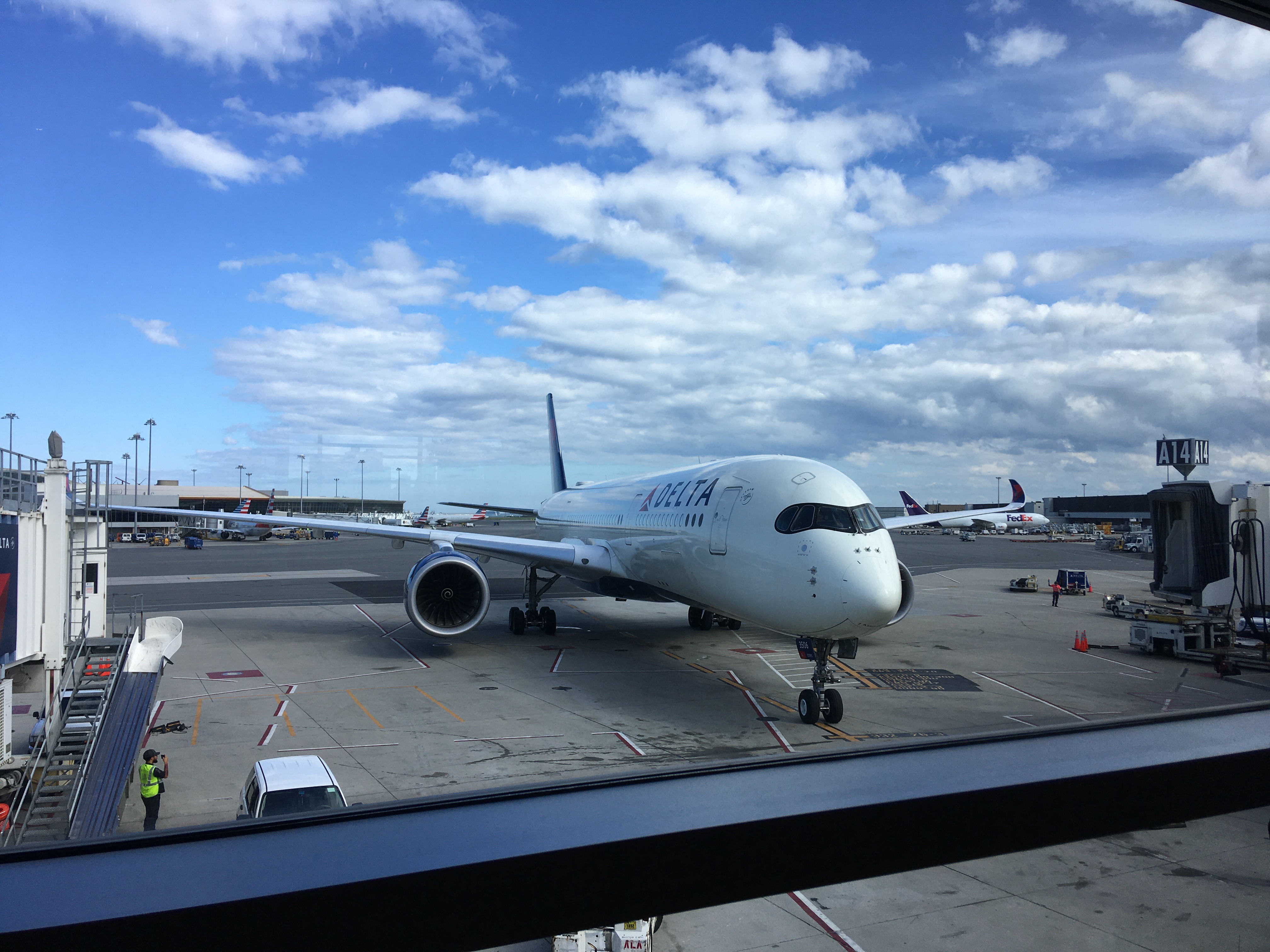 We used A14 and walked uphill to L1. I was in 35A, which is an all wing view. Economy seemed cramped compared to other Delta economy seats, maybe its just me. 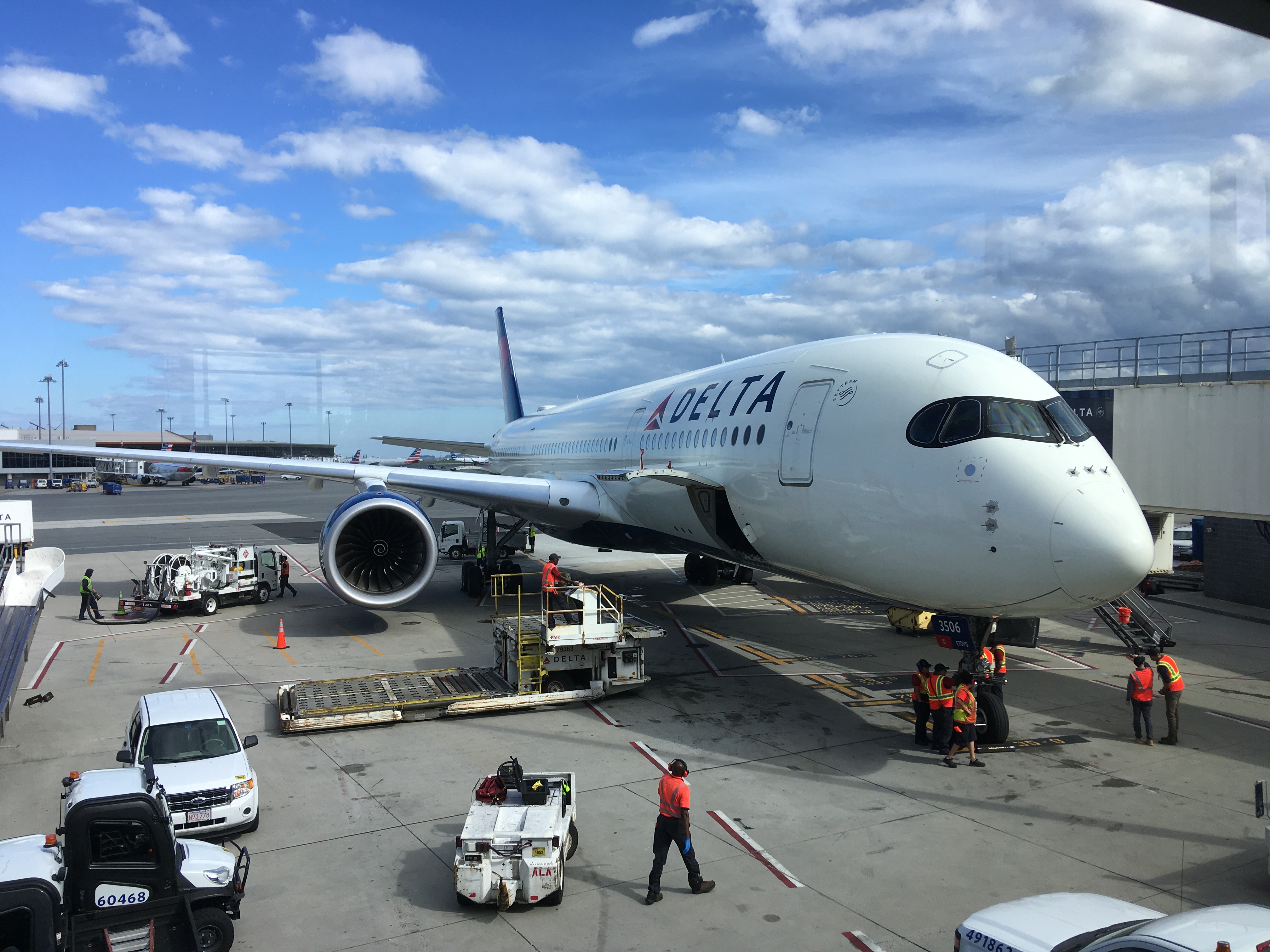 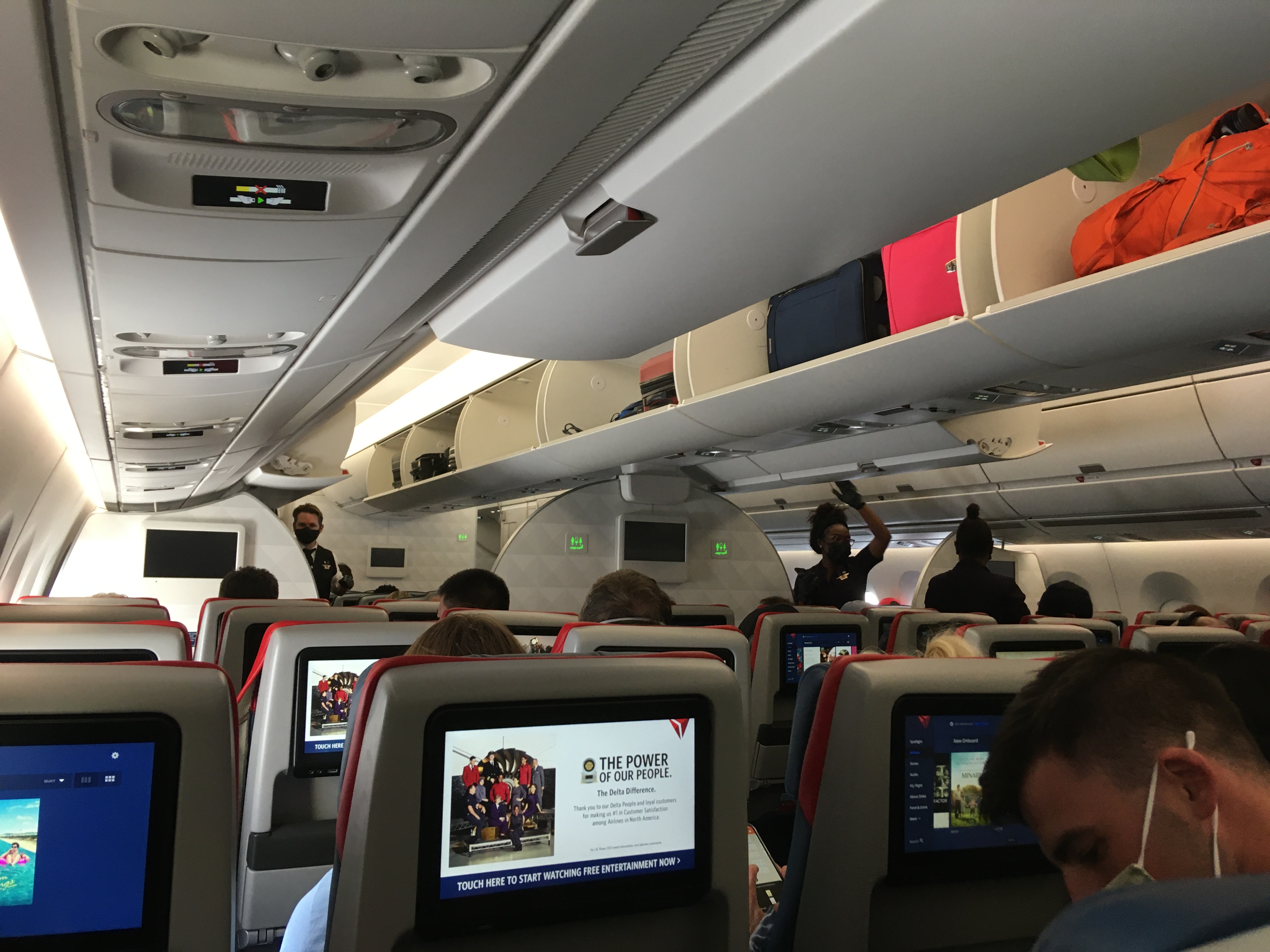 I believe we departed from 4R, although it may have been 4L. Take off was pretty uneventful, we turned, lined up and waited only a second or two and began the roll. No major seat pushback. 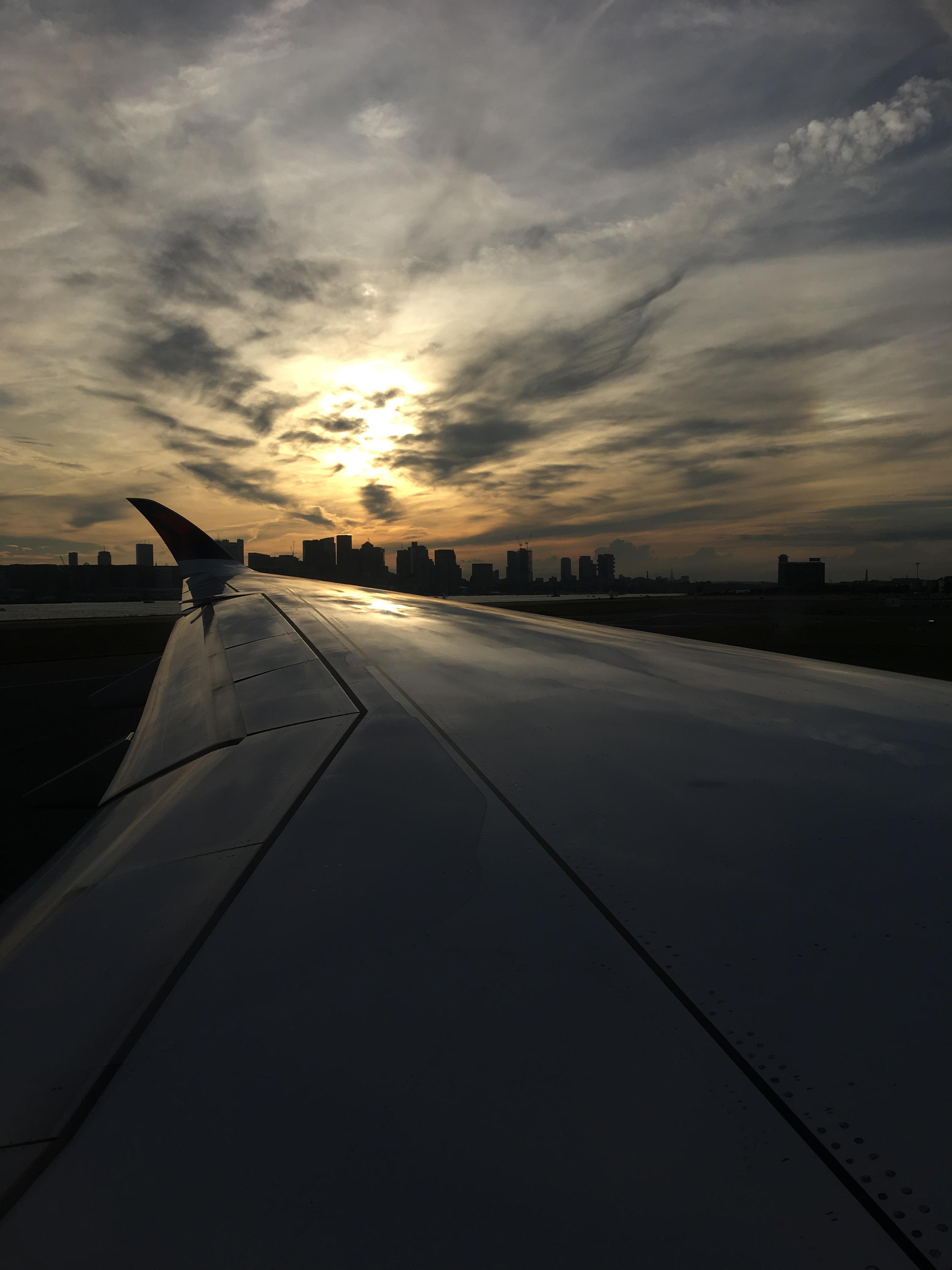 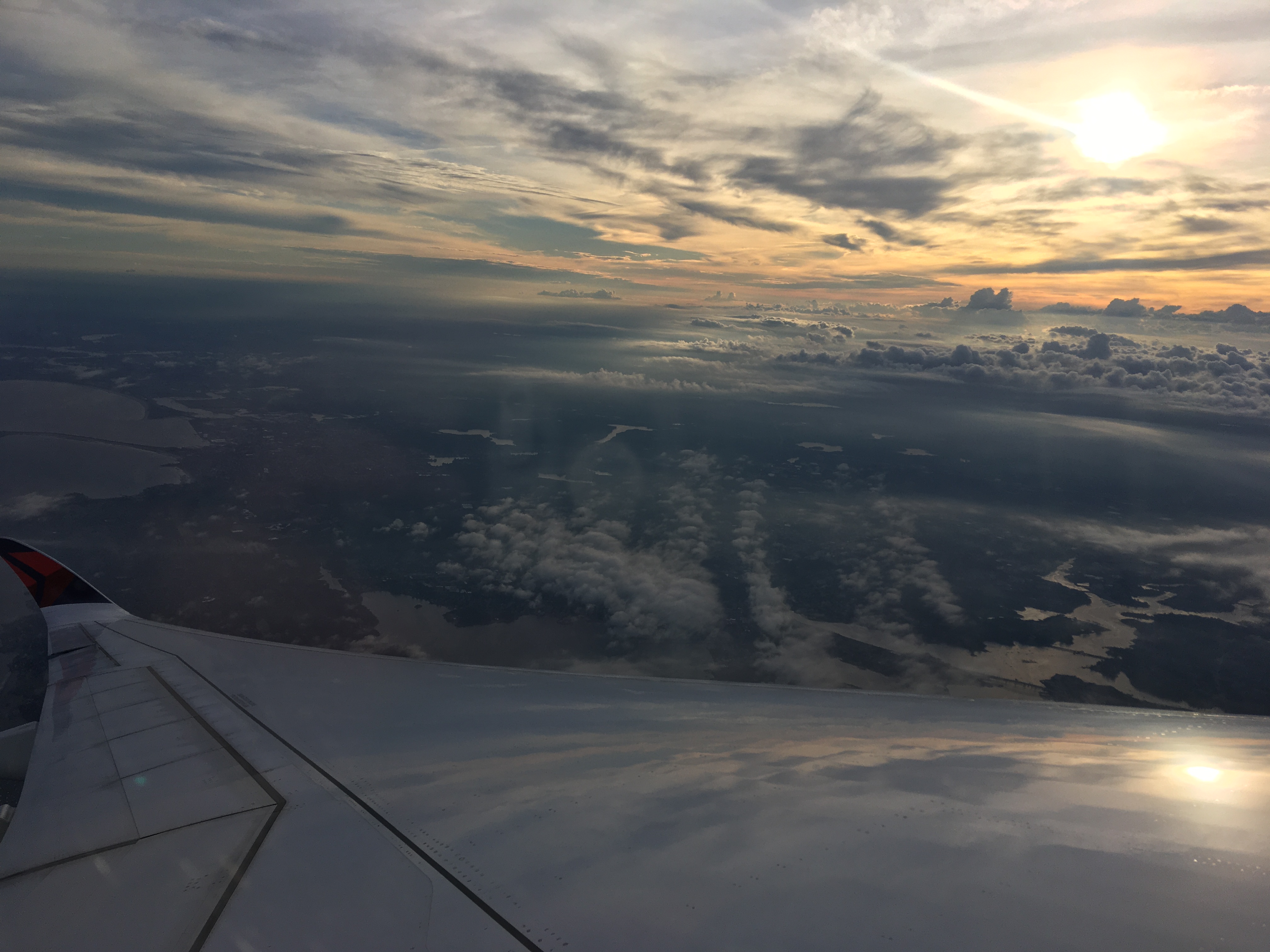 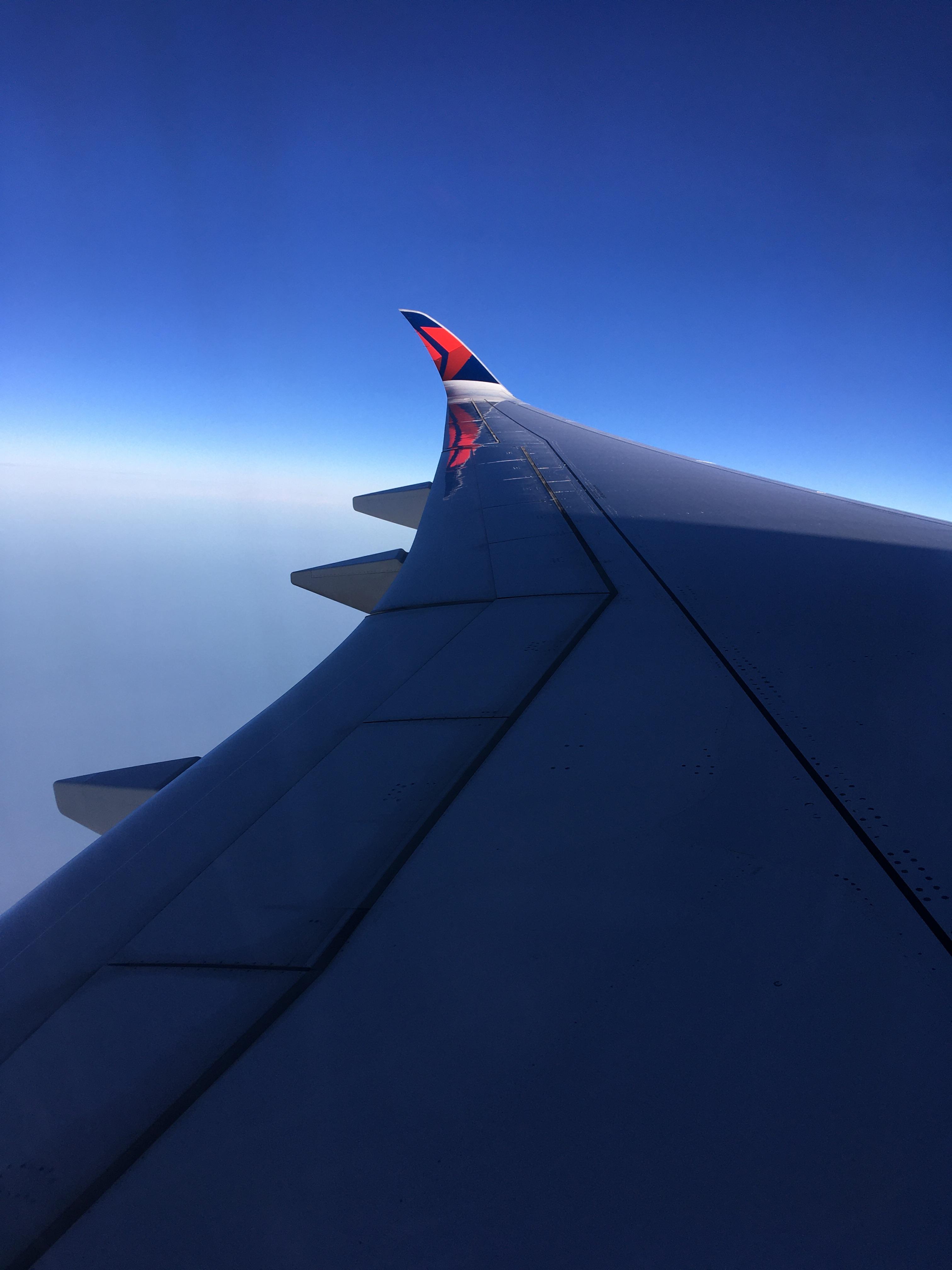 The flight was uneventful other than landing in a thunderstorm in SLC which gave us some light to moderate turbulence. No idea which RW we landed on at SLC. This was my first time flying on a plane with composite wings and I didn't see much wing flex at all on T/O but in the turbulence there was some. I was surprised at how loud the wing and landing gear operations were.

As a disclaimer, I'm not a trip report person, this just seemed like a worthy event to document and I only used a crummy cell phone camera. Hope you enjoy regardless.
Top

Thanks for the TR. I didn't realize DL was operating BOS-SLC with an A333.

Gillbilly wrote:
We used A14 and walked uphill to L1. I was in 35A, which is an all wing view. Economy seemed cramped compared to other Delta economy seats, maybe its just me.

That must have been quite an incline to board the 359 at the L1 door.
Top

The A333 is only on certain days I think, it is otherwise a 739. And yeah, it was very noticeable.
Top

It’s not you. Several airlines use the same seats in Y on the A350. Claimed seat width on websites vary widely.
Top

BOS only allows props to take off from 4L, so you were on 4R.
Top

tjerome wrote:
BOS only allows props to take off from 4L, so you were on 4R.

Oh interesting, thanks. Now that you mention that I think I had subconsciously noticed that but it never really sunk in.
Top

It’s not you. Several airlines use the same seats in Y on the A350. Claimed seat width on websites vary widely.

I agree that it's not just you.

Really the only blemish on an otherwise awesome ride. Try the premium select product overseas if you can when things get back to normal. It's pretty good for sometimes very good prices.
Top