What's different in their signals? Do they function in the exact same way to produce radials? Which one is more accurate?

Considering their construction, I imagine they operate very differently.


The TACAN is the green cylinder: 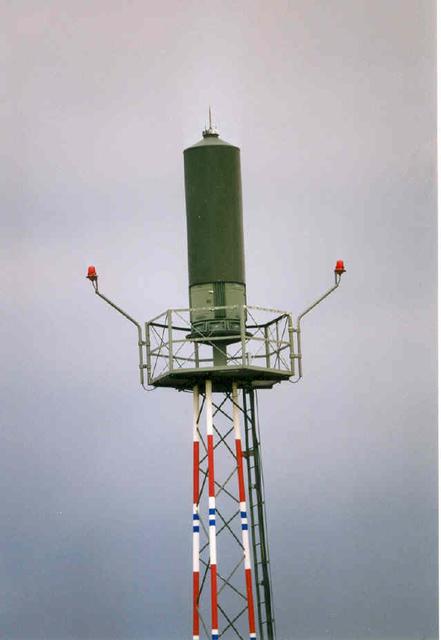 TACAN is used by the military, it gives azmuth and distance information; dme only gives distance; in practice for us civil pilots they are one and the same since we use VORTACs and VOR-DMEs, both of which we get azmuth information from the VOR and distance info from the latter.
Top

VOR operates on frequencys 108.00-117.95..anything above that is comm freqs, anything below is your FM radio stations.

TACAN operates on "channels", at least inside a military aircraft, for example, "24" would be a station designator. You can find a TACAN even on a cruiser or an aircraft carrier...it's how the Navy planes find their way back home.

VOR's with no DME suck...case in point, (former) NAS Cecil Field, Jacksonville...117.90, no DME, just bearing..but there was a TACAN right there for years, no longer in operation since the base closed.

What's been said so far is correct. TACAN operates on UHF frequencies, around the 1 GHz range. TACAN always incorporates a DME, which is a pretty useful thing - many VORs don't have DMEs attached.

VOR and TACAN operate the same way, regardless of what the transmitter looks like. It's a phase differential system. As I am not an avionics type, I will leave further details to someone who knows better.
Top

"TACAN operates on "channels", at least inside a military aircraft, for example, "24" would be a station designator. You can find a TACAN even on a cruiser or an aircraft carrier...it's how the Navy planes find their way back home."

Channels are like the preset buttons on your car radio. Instead of having to tune in the specific frequency, you just hit the button that's already been tuned to it. If you are away from your local area, you'll have to manually dial in the frequency you want.

I hope that doesn't confuse anyone

TACAN was one of those words the nomex crowd used to spice up their bar conversation.

VOR is something the GNADIRS autotunes and cross-checks itself with. It is a footnote, a lesser form of magic. Some older GenAv guys like to call it "omni" for reasons similar to the explanation of TACAN above.

The so-called "older" guys call it "omni" because VOR stands for VHF Omnidirectional Range. Its not a buzz word.

DME, is Distance Measureing Equipment. The name is pretty self explanatory.

TACAN "channels" are used so people don't have to memorize the frequencies. DME stations are also assigned channels. That's because "channel 77" is a bit easier to remember than 1164GHz.

In practice, the DME channels are paired with VOR frequencies so they can be automatically tuned with the VHF Nav receiver.

TACAN provides continuous distance and bearing just like VOR/DME but at different frequencies. As mentioned, it is primarily a military system but TACAN sensors are also utilized in civilian airplanes. To a lesser extent these days with the availability of GPS sensors.

TACAN is supposedly more accurate, because of antenna radiation pattern. The existance of more side lobes than a VOR transmission, creates a more even transmission pattern, that proponents claim is about 9 times more accurate than VOR/DME. I haven't seen evidence of this however, mainly because I've only witnessed the operation of TACAN enroute where accuracy is difficult if not impossible to determine. Required accuracy isn't quite so critical in this phase of flight either.

Perhaps someone who has used TACAN for approaches can chime in.