Modern high bypass jet engines are almost shrouded prop planes where the "prop" is driven by a turbine rather than a reciprocating engine. A modern bypass engine has say a 8 or 10:1 ratio. Not too much Jet there, more fan / prop.
Would it make sense to separate those two components, for example, put the core of the engine on top of the fuselage and the fan part below the wing? It seems that bypass ratios have been increasing faster than core sizes and the total diameter may start to become an issue (requires heavier landing gear etc).
Additionally, would a pure jet core be better off with a faster spinning compressor? It seems to me that right now the maximum compression to a degree is limited by the radius of the fan (speed of sound).
Apologies in advance if this a complete newbie question. The search function does not seem to work so well..


The diameter is, for the most part, dictated by the fan and not by the core. Cores are not really getting any bigger. So by moving the core away from the fan, you are adding weight and mechanical complexity while not significantly reducing overall diameter. Another proposal someone brought up on this site was to run a belt of some sort so that a single core would turn two fans, one in front of the core and one mounted adjacent to it. That would provide more bypass ratio while not adding another core. The problem is that in an engine-out situation, you now have two windmilling fans where there would have been one.

As for using a faster core, there is a brand-new engine called the PW1000G that is a geared turbofan and that's exactly what it does. It allows the N1 spool to spin I think 6x faster than the fan.
-Doc Lightning-

GTFs seem to be a patch – trying to bridge the different strengths and requirements of the bypass / fan/prop component and the turbine part of the engine. Given the high efficiency of electric motors perhaps it would be possible to drive the fans, in whatever location makes most sense, electrically, and generate the power with generators driven by jets? After all, the energy density of liquid carbohydrate fuels is (still) unsurpassed.
Top

In the case of a turbine engine driving a rotating propulsor, a direct drive is the most energetically efficient when the main power output is propulsive. Adding a generator/motor combination would add a lot of weight with little benefit. Turbo-electric drives were not even that popular on steamships, although there they offer a lot more advantage in terms of maneuverability and responsiveness.

An electric fan would make sense if high-temperature fuel cells were used as the primary energy source. High-temperature fuel cells can crack hydrocarbon fuels into hydrogen and carbon and then react those with oxygen to produce similar exhaust to a jet engine (but less NOx). In this case, as much as 60% of the energy in the fuel could be converted directly to electricity. Imagine a 50% reduction in fuel consumption. In that case, an electric motor could drive the fans, and while the additional weight and complexity might rob some fuel efficiency, it wouldn't be awful. However, sufficiently powerful electric motors are pretty large and have very heavy magnets.
-Doc Lightning-

If you do have a gear, it's a lot easier to move from the existing fan/core architecture. For instance you could run two much smaller fans in parallel driven from a common core. It would have the same air flow but less ground clearance/wing interference problems. I don't think they'd be as efficient though as drag would probably be higher and so would tip losses. It would likely be heavier with the gears and shafts.
Top

or the NASA one:-
http://www.nasa.gov/content/hybrid-wing-body-goes-hybrid 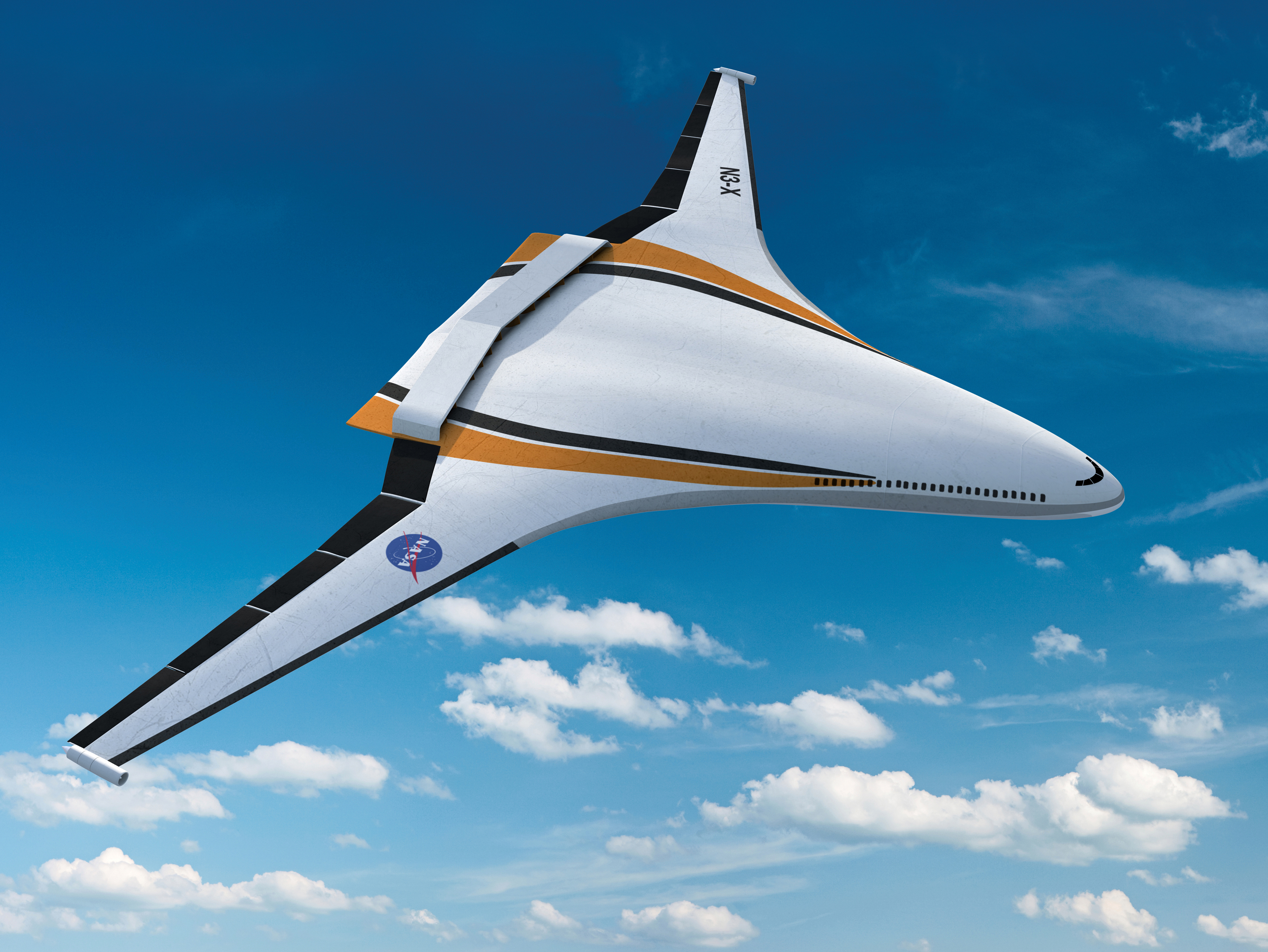 The core of the engine, the gas generating compressors and turbine stages, do turn quite fast. In most high bypass turbofans, the fan stage is driven by it's own turbine stage so that the tip speed of the fan is limited to reduce formation of shock waves.
Top


Unfortunately electric motors, particularly large ones, are quite heavy, and now you need both a motor and a generator (pretty much the same thing, just run in the other direction).

Some of the more exotic types manage 2hp/lb, but those only exist in small sizes. A few years ago the USN started testing a Northrop (high temperature) superconducting 49,000HP electric motor for use on ships. It weighted a mere 75t (~.3hp/lb), which is remarkable, since a conventional electric motor in that output range would be more like 200t. And that's roughly half of what a GE-90 core is producing (and a whole GE-90 is only about 9t). Medium sized electric motors (10-100hp) do better than that, but more in the .5hp/lb range for convention ones.

Using the .3hp/lb assumption, the generator and motor sets needed to transmit the power of two GE-90 cores to two GE-90 fans, would be some 600T. IOW your 777 is now going to have to lift an additional mass roughly equivalent to a grossed out A380.

Now that design has certainly been used in some large warships and is quite common in locomotives (where the high and controllable torque is especially valued), but those are both applications where weight is (relative to aircraft) a complete non-issue.
Top


Thank you for your very interesting contribution to this thread.

Diesel locos are also doing so well because they use the same electric motors as electrified locos, so no expensive new development was necessary. I wonder whether we will see more electric engines soon, though. With your numbers, this seems unlikely, yet.
Top


I'm not sure that's really an issue - diesel-electric locomotives started seeing significant use in the mid-1930s, and existed in experimental form for at least a couple of decades prior to that. So any of those costs would have been borne long ago. While I'm sure there is some cross-pollination with pure electric (and electro-diesel and now hybrid) locomotives, the ~3000HP class electric motors (and generators) are no mystery at all at this point, and are available practically off-the-shelf for myriad industrial uses. 50KHP class motors, not-so-much.

The F-35B is an example of the difficulties - if it were plausible weight-wise, it would have been far easier to drive the lift-fan electrically (and it would have made it much easier to place the fan, possibly using more than one, and eliminated a long, vibration-prone drive shaft running through a particularly busy part of the aircraft structure). But, of course, the F-35B is even more weight-sensitive than most aircraft.
Top

In addition to what others have said, I'll kick in noise as a problem with the OP's proposal. I am not an aeronautical engineer so my guess may be way off. My understanding is the relatively slow and cool air from the bypass fan shrouds the fast and hot air from the core reducing engine noise. By separating the two, the engines will require hushkits which increase weight, costs and complexity while reducing efficiency.
Not biased against vacuum flush.
Top


Nah, there is more to it than that.

The excessive noise from a pure jet engine mainly comes from the exhaust gasses traveling at high supersonic speed.

But whatever the transmission type to a fan, direct mechanic, geared mechanic, electric or whatever, there will always be a low pressure turbine to take up the energy from the core exhaust gasses.

In principle it will noise wise be the same as a turboprop or a turbine powered helicopter.

A helicopter is in fact the same as such a plane, (as proposed by the thread starter) where the "fan" is totally removed from the engine. The fan is just very large, few blades, geared to very slow rpm, unducted, and rotating perpendicular to the engine.

In fact most noise from helicopters usually come from the rotor because the tips are operating near sonic speed. Not so much from the engine core.

It doesn't mean that I am optimistic about such power transmission types as proposed. A mechanical gearbox tops out at 94-95% efficiency. It means that 5-6% of the energy is converted into heat. Getting rid of that heat on a power system with tens of thousands of HP is very difficult, when weight is also an issue.
Always keep your number of landings equal to your number of take-offs
Top
Post Reply